Methods: In this pilot study, seven FMS patients (1 man, 6 women) agreed to participate in experimental PET scans. All patients underwent neurological examination, were investigated with questionnaires for pain, depression, and FMS symptoms. Additionally, blood for IL-4 gene expression analysis was withdrawn at two time points with a median latency of 1.3 years. Patients were investigated in a PET scanner using the opioid receptor ligand F-18-fluoro-ethyl-diprenorphine ([18F]FEDPN) and results were compared with laboratory normative values.

Conclusion: Our data give further evidence for a reduction in cortical opioid receptor availability in FMS patients as another potential central nervous system contributor to pain in FMS.

There is an ongoing discussion on potential contributions of the peripheral and central nervous system (PNS, CNS) to the pathophysiology of pain in fibromyalgia syndrome (FMS). The CNS has been investigated with different methods pointing to an altered processing of nociceptive input in FMS patients compared to controls. Current evidence supports increased central sensitization, morphological alterations in cortical areas, reduced functional connectivity of descending pathways, and increased activity in the cerebral “pain matrix” (Cagnie et al., 2014; Dehghan et al., 2016). In a recent study, even a potential influence of central mechanisms on peripheral innervation was suggested in an experimental model (Harte et al., 2017).

Reduction in central opioid receptor binding has been described in FMS patients (Harris et al., 2007) and was confirmed in antinociceptive brain regions (Schrepf et al., 2016). In a previous study, we showed reduced systemic gene and protein expression of the anti-inflammatory and analgesic cytokine interleukin-4 (IL-4) in patients with FMS compared to healthy controls (Üçeyler et al., 2006). IL-4 links the neuro-immune and the opioid system by inducing μ-opioid receptor gene transcription (Kraus et al., 2001). We hypothesized that FMS patients with low systemic IL-4 gene expression might also have a reduced central opioid binding capacity, potentially leading to low opioid-sensitivity to endogenous and exogenous opioids as a contributor to FMS pain.

Our study was approved by the Ethics Committees of the Universities of Würzburg and Mainz, Germany. Written informed consent was obtained from all patients before inclusion. Patients were recruited at the Department of Neurology, University of Würzburg between 2007 and 2010. We enrolled seven opioid naïve FMS patients (1 man, 6 women) with a median age of 58 years (51–69 years) fulfilling the American College of Rheumatology 1990 diagnostic criteria (Wolfe et al., 1990) and who were willing to undergo experimental PET assessment in addition to the tests performed to investigate the PNS (Üçeyler et al., 2013) and the CNS (Üçeyler et al., 2015). Except for one patient, all patients were seen at three visits (Supplementary Table S1). Inclusion criteria were: men and women ≥ 18 years, other possible differential diagnoses excluded (e.g., rheumatologic, orthopedic), no clinically relevant psychiatric disorder (examined by systematic psychiatric interview). Exclusion criteria were: pain of other origin than FMS (e.g., post-surgery pain), current or prior cerebral diseases (e.g., stroke, cerebral hemorrhage or head trauma), prior or current opioid intake.

Patients underwent complete neurological examination at the Department of Neurology, University of Würzburg, Germany by the same investigator (N.Ü.) and the diagnosis of FMS was confirmed (Wolfe et al., 1990). For standardized pain assessment we used the German version of the Neuropathic Pain Symptom Inventory (NPSI) and the Graded Chronic Pain Scale (GCPS). To investigate depressive symptoms, the German version of the Beck Depression Inventory II (BDI) was applied. The calculated BDI scores reflect > 14 mild, >20 medium, >29 severe depressive symptoms. The German version of the Fibromyalgia Impact Questionnaire (FIQ) was used to determine FMS associated symptoms and their burden on overall well-being in the week before assessment. The FIQ was used instead of the revised FIQ, which was published after study initiation.

Venous whole blood was withdrawn at 8–9 a.m. in monovettes containing ethylene-diamine-tetra-acetic acid after over-night fasting. A second blood sample was collected from six of the seven patients during a routine clinical follow-up visit (median latency 1.3 years after first visit) under the same conditions; of one patient blood could be obtained only during the second visit (see below). Aliquoted and flash-frozen (in liquid nitrogen) blood samples were stored at –80°C before further processing.

Within 4 weeks after clinical examination and blood withdrawal, PET scans were performed under resting conditions at the Department of Nuclear Medicine, University of Mainz, Germany using a Siemens EXACT PET scanner (Siemens/CTI, Knoxville, YN, United States) and the subtype-non-selective opioidergic radioligand [F-18]fluoroethyl-diprenorphine ([18F]FEDPN) as previously described (Baumgartner et al., 2006). Dynamic emission imaging in 3D-mode started simultaneously with [18F]FEDPN injection (185 ± 6 MBq) and had a total duration of 94 min. The recordings were scatter and attenuation corrected and then reconstructed with filtered back projection (FBP) using Hanning-Filter with a filter width of 7.3 mM.

Statistical analysis of the non-normally distributed qRT-PCR data was performed using SPSS software version 24 (IBM, Ehningen, Germany), and the non-parametric Mann-Whitney-U-test was applied. Significance was assumed at p < 0.05. Statistical analysis of the PET data was performed using SPM8 implemented in Matlab 7.9 (MathWorks, Sherborn, MA, United States). The analysis included several steps. First, one-way analysis of covariance (ANCOVA), controlling for global [18F]FEDPN binding potential and followed by post hoc unpaired t-tests, was used to identify significant differences in binding potential between the normal healthy controls and the opioid naïve FMS patients. The resulting set of values for each contrast constituted a statistical parametric map of t statistics (SPMt). The SPMt values were transformed to the unit normal distribution SPMz. To correct for multiple comparisons, SPMt offers the method of small volume correction (SVC). We performed SVC for a number of 1,500 voxels leading to a corrected p < 0.05. The statistical parametric maps for intergroup comparisons were based on a threshold for uncorrected probability of p < 0.005.

Neurological examination was normal in all patients at both visits. The Table 1 and Supplementary Table S2 summarize the group and individual characteristics of the study population at the second visit (i.e., prior to PET scan assessment). All patients had chronic and constant pain with a median current pain intensity of 5 (range 3–7) on a numeric rating scale (NRS) ranging from zero (no pain) to ten (worst pain). 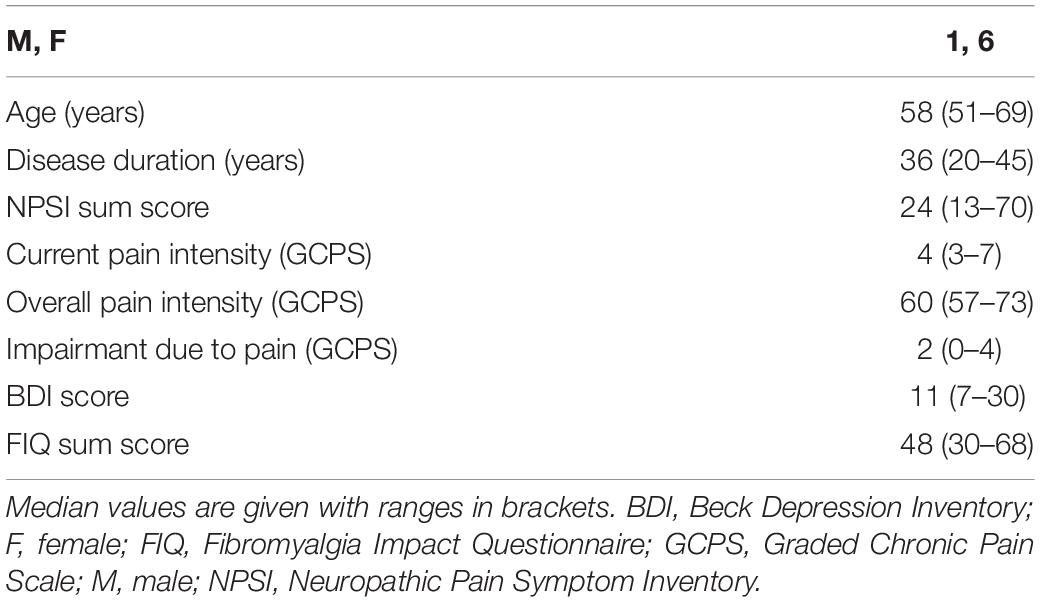 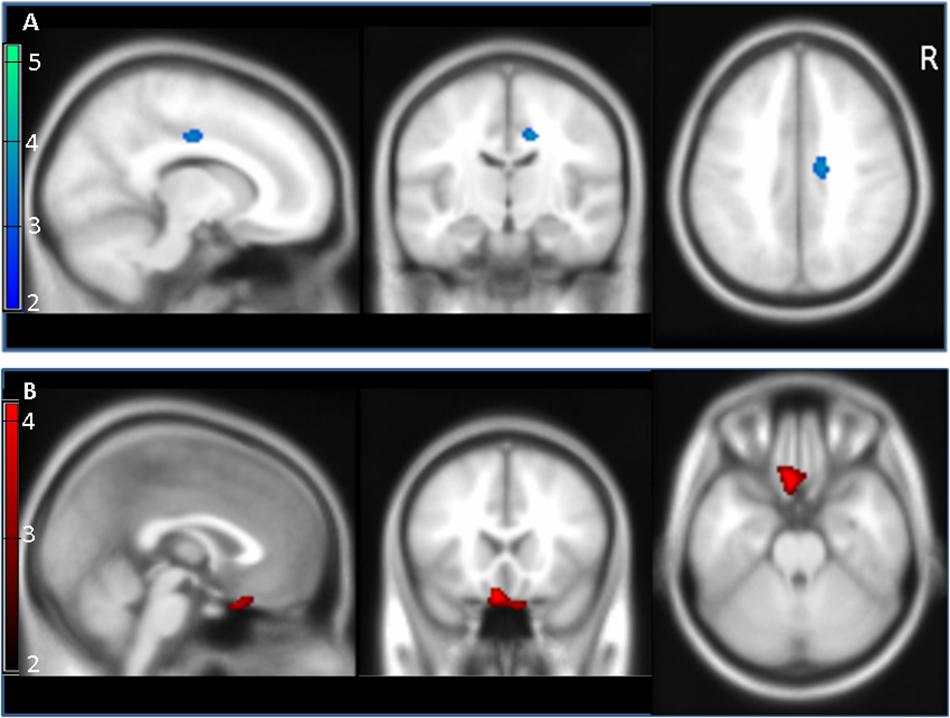 Opioids exert analgesic effects in only a subgroup of patients with FMS and are not recommended by national and international treatment guidelines as first line medication. A reduction in central opioid receptor binding has been reported in FMS patients particularly in antinociceptive brain regions. Harris et al. investigated 17 patients with FMS compared to 17 healthy controls with PET scans and reported reduced cerebral μ-opioid receptor availability in patients (Harris et al., 2007). The same group later assessed 18 FMS patients and compared pain-evoked functional magnetic resonance imaging data with endogenous μ-opioid receptor binding (Schrepf et al., 2016). The authors observed reduced μ-opioid receptor availability associated with decreased pain-evoked neural activity, suggestive of dysfunction of the endogenous opioid system as one central contributor to FMS related pain. Interestingly, even in our small cohort, we could confirm the finding of reduced cerebral opioid receptor availability in the mid cingulate cortex, and, like in Harris et al. (2007), the findings were lateralized to the right.

The major limitation of our study is the low number of participants. Two reasons hampered patient recruitment: history or current intake of opioid analgesics, which were exclusion criteria, and the refusal of patients to undergo experimental PET using nuclear tracers. Also, no PET scans were available from the control persons in whom systemic IL-4 levels were investigated, thus [18F]FEDPN binding and its correlation with IL-4 levels could not be assessed in these. Matching of FMS patients and healthy controls was not possible for PET experiments, which is another limitation. We found a cluster in the fronto-basal cortex with a max z = 3.6 (259 voxels). Analysis of this cluster showed more voxels in gray matter (101) than in white matter (37). There are two effects which may impact the spatial precision of significant clusters: the limited spatial resolution of the PET images compared to MRI, which is used for overlay to identify the corresponding anatomic structure, and additional smoothing of PET images prior to SPM analysis, which is required to achieve a reasonable statistical power. It is, however, intriguing that differences in the opioid receptor binding potential were found between groups despite this low number of subjects.

All datasets generated for this study are included in article/Supplementary Material.

The studies involving human participants were reviewed and approved by the Ethics Committees of the Universities of Würzburg and Mainz, Germany. The patients/participants provided their written informed consent to participate in this study.

We thank Lydia Biko and Rainer Marx for help during patient recruitment and Sonja Gommersbacher and Daniela Urlaub for expert technical help.

The Supplementary Material for this article can be found online at: https://www.frontiersin.org/articles/10.3389/fnins.2020.00512/full#supplementary-material

Copyright © 2020 Üçeyler, Buchholz, Kewenig, Ament, Birklein, Schreckenberger and Sommer. This is an open-access article distributed under the terms of the Creative Commons Attribution License (CC BY). The use, distribution or reproduction in other forums is permitted, provided the original author(s) and the copyright owner(s) are credited and that the original publication in this journal is cited, in accordance with accepted academic practice. No use, distribution or reproduction is permitted which does not comply with these terms.