Conclusion: Decreasing cerebral venous oxygen level in AD patients may affect cognitive status, and associated with the deterioration of the disease in AD patients.

Alzheimer’s disease (AD) is a progressive neurodegenerative disease and the most prevalent type of dementia in the elderly (Gong et al., 2019). AD is characterized by progressive cognitive and functional deficits and behavioral changes. Neuropathological features of AD include neuronal loss caused by neurofibrillary tangles (NFTs) and senile plaques formed by the deposition of β-amyloid protein (Aβ) in the brain (Harrington, 2012).

Previous studies have shown that cerebral blood flow is decreased in AD patients (Mak et al., 2014). Cerebral metabolic ratio of oxygen may decrease with the long-term cerebral blood perfusion insufficiency, which may affect the metabolism of neurons. Nevertheless, it remains unclear whether the decrease of cerebral oxygen content is associated with the cognitive decline in patient with AD. Different MRI sequences are currently applied to quantify the changes in cerebral oxygen and calculate oxygen extraction fraction (OEF) (An et al., 2001). Local OEF can be calculated based on the changes in venous phase values of susceptibility weighted imaging (SWI), which has just been applied to clinical work (Barnes and Haacke, 2009; Kesavadas et al., 2010; Zaitsu et al., 2011; Li et al., 2013; Messina et al., 2014).

Over the recent years, it has been found that SWI has some shortcomings in quantitative measurement. φ value is a parameter reflecting the magnetic susceptibility of tissues. Yet, due to the effect of “dipole field,” the accuracy and repeatability of measurement of φ value are not high enough (Liu et al., 2015). In order to improve the shortcomings related to quantitative measurement of SWI, a new sequence known as quantitative susceptibility mapping (QSM) was designed. It is a non-invasive magnetic resonance imaging technique that generates a linearly proportional, volumetric image based on the magnetic susceptibility of the subject tissue (Derry and Kent, 2017). This sequence measures the magnetic susceptibility of tissues rather than the φ value, which solves the problem of measuring the φ value in algorithm. The intensity of QSM signal depends on the amount and concentration of deoxyhemoglobin in tissues and the diameter of blood vessels (Mukherjee et al., 2003), QSM can reliably calculate the oxygen saturation of human cerebral veins (Fan et al., 2014) and obtain the magnetic susceptibility value (MSV), provide information on oxygen metabolism (Jensen-Kondering and Böhm, 2013). To our previous literature review, there was no studies reported were found on cerebral venous oxygen level for patients with AD.

Fifty-nine patients with clinically confirmed AD (AD group) were recruited in the Neurology Department between September 2015 and December 2018. Subjects were enrolled based on National Institute of Neurological and Communicative Disorders and Stroke and the Alzheimer’s disease and Related Disorders Association (NINCDS/ADRDA) criteria for probable AD (McKhann et al., 1984, 2011). The exclusion criteria: (a) other forms of dementia, such as frontotemporal dementia, dementia with Lewy bodies, vascular dementia and Parkinson’s disease dementia; (b) a history of stroke, brain tumor, serious head trauma, smoking, alcohol or drug dependence, and neurologic or psychiatric diseases; (c) large-vessel disease and diseases with white matter lesions. In addition, 22 elderly without cognitive impairment were recruited as control group (CON group). In this group of patients, the high signal intensity of white matter on MRI was below Fazekas-scale grade 2 or less than 2 static lacunar infarctions in the brain. Both AD group and CON group were right-handed.

This retrospective study was approved by the hospital ethics committee. In addition, all patients signed the informed consent.

Quantitative measurement of MSV of region of interest (ROI) in magnetic sensitive maps was analyzed using SPIN software. As shown in Figure 1, the ROI included bilateral internal cerebral veins (ICV), septal veins (SV), thalamus veins (TV), basal veins (BV) and dentate nucleus veins (DNV). Briefly, the ROIs were manually drawn along the boundary of the full length of the vein at the maximum slice that clearly displayed the vein. Three consecutive slices were then measured at the same location and averaged, avoiding the influence of air-cranial junction and ventricular system. Due to the small range of the SV and DNV in some patients, it could not be clearly displayed at three consecutive slices, then the same part was repeatedly measured three times and averaged. In order to ensure maneuverability of measurement, the ROI should select vessels with clear display and relatively fixed. The ROIs were manually drawn by two neuro-radiologists (neuro-radiologist 1 with 10 years of experience, neuro-radiologist 2 with 5 years of experience) in the same manner. To evaluate inter-observer reliability, the intra-class correlation coefficients (ICCs) were calculated, ICC > 0.75 was considered with inter-observer stability. 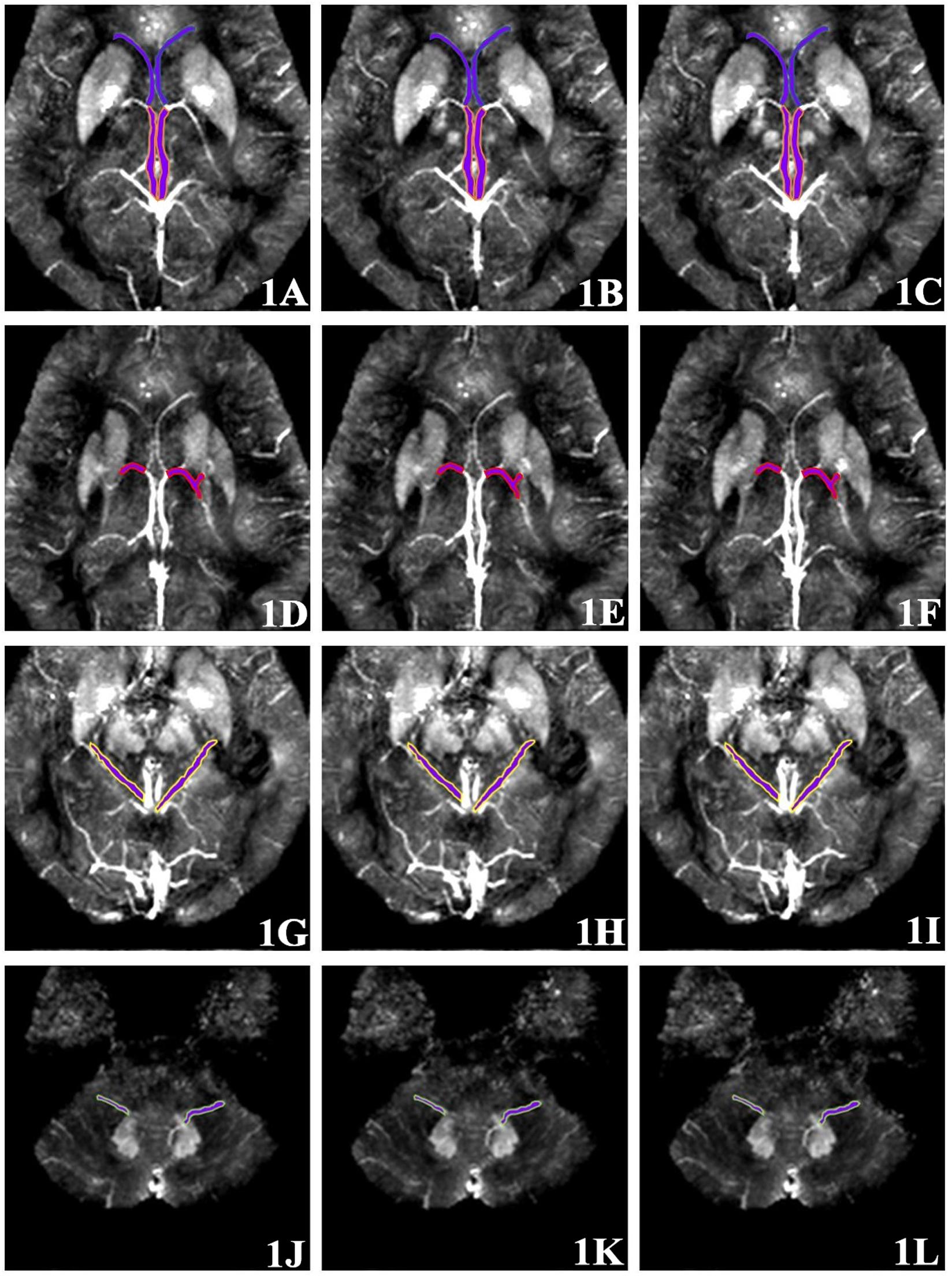 The clinical and cognitive data were summarized in Table 2. There was no significant difference in gender, age or years of education between the two groups (p > 0.05). The MMSE score, MoCA score, CDT score and ADL score in AD group were significantly different from that in CON group (p < 0.001). 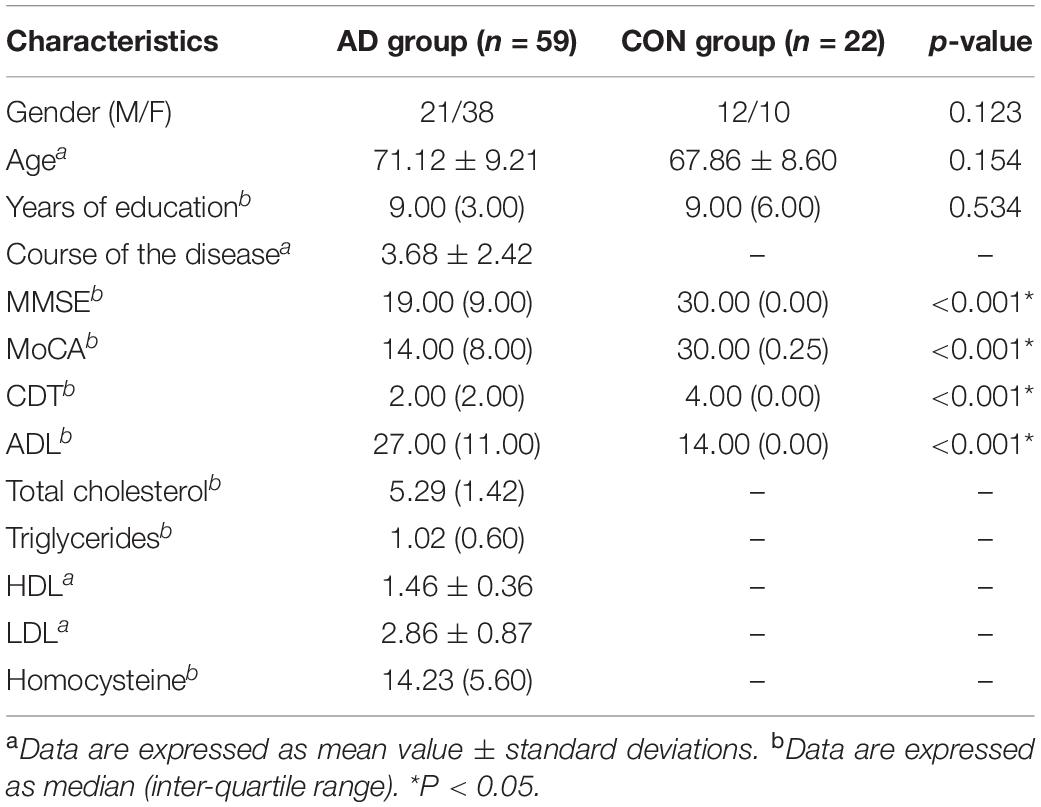 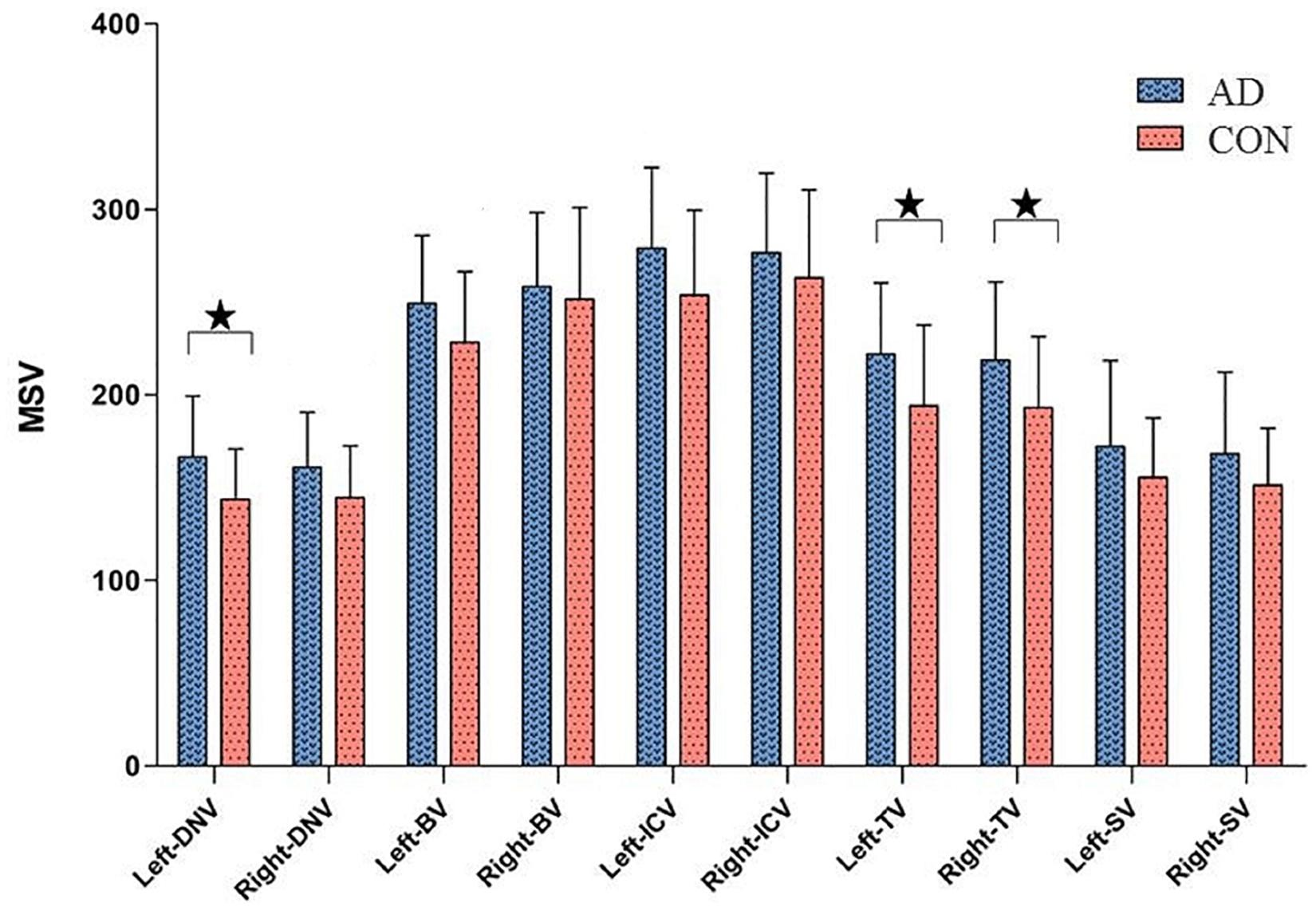 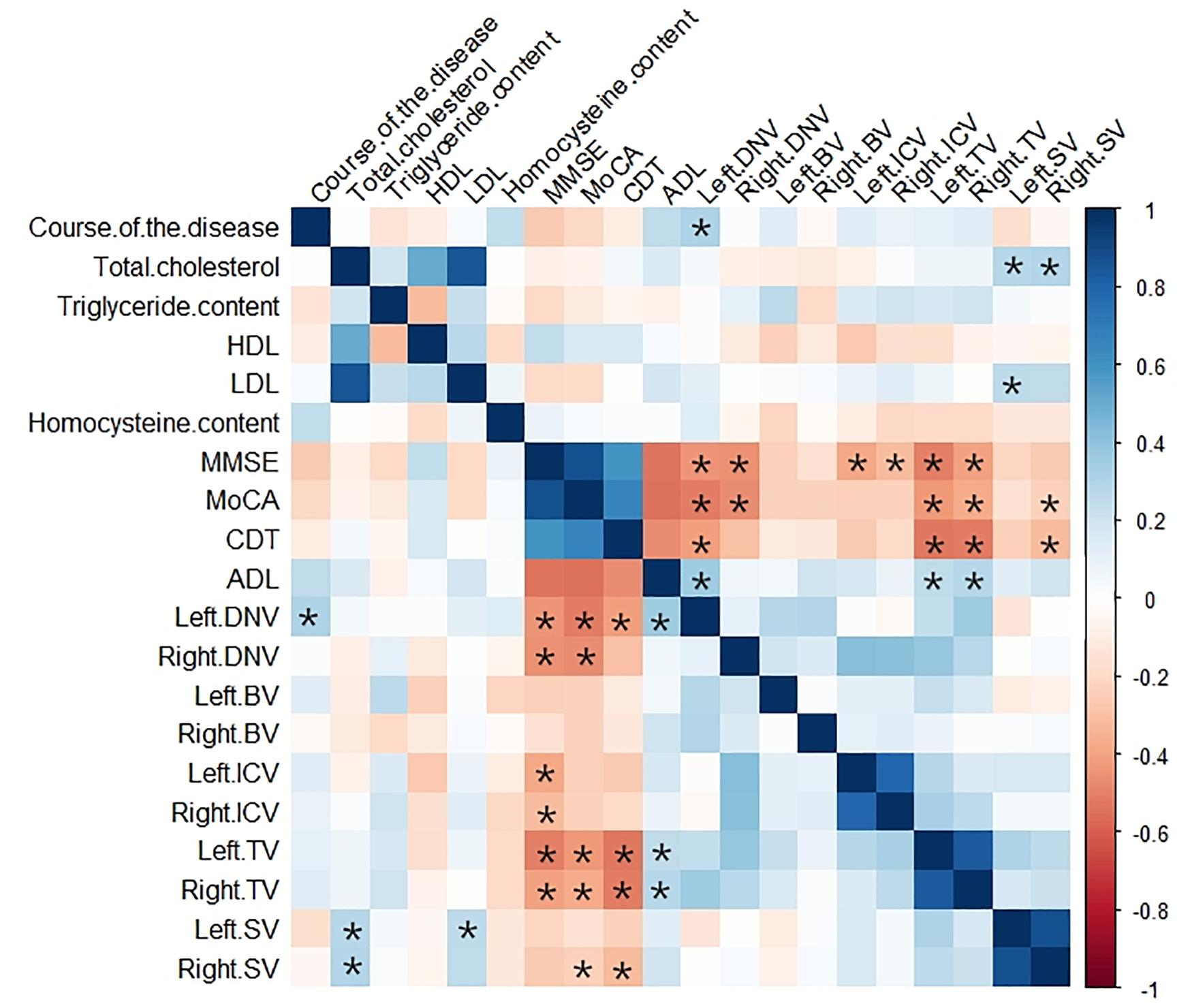 Figure 3. Heat map showing the correlation analysis between MSV of cerebral veins and clinical data, laboratory examination indexes, MMSE score, MoCA score, CDT score, ADL score in AD group. Color bar on the right side displays the value of the correlation coefficient (higher from –1 to 1, and from red to blue). *Significant correlation. 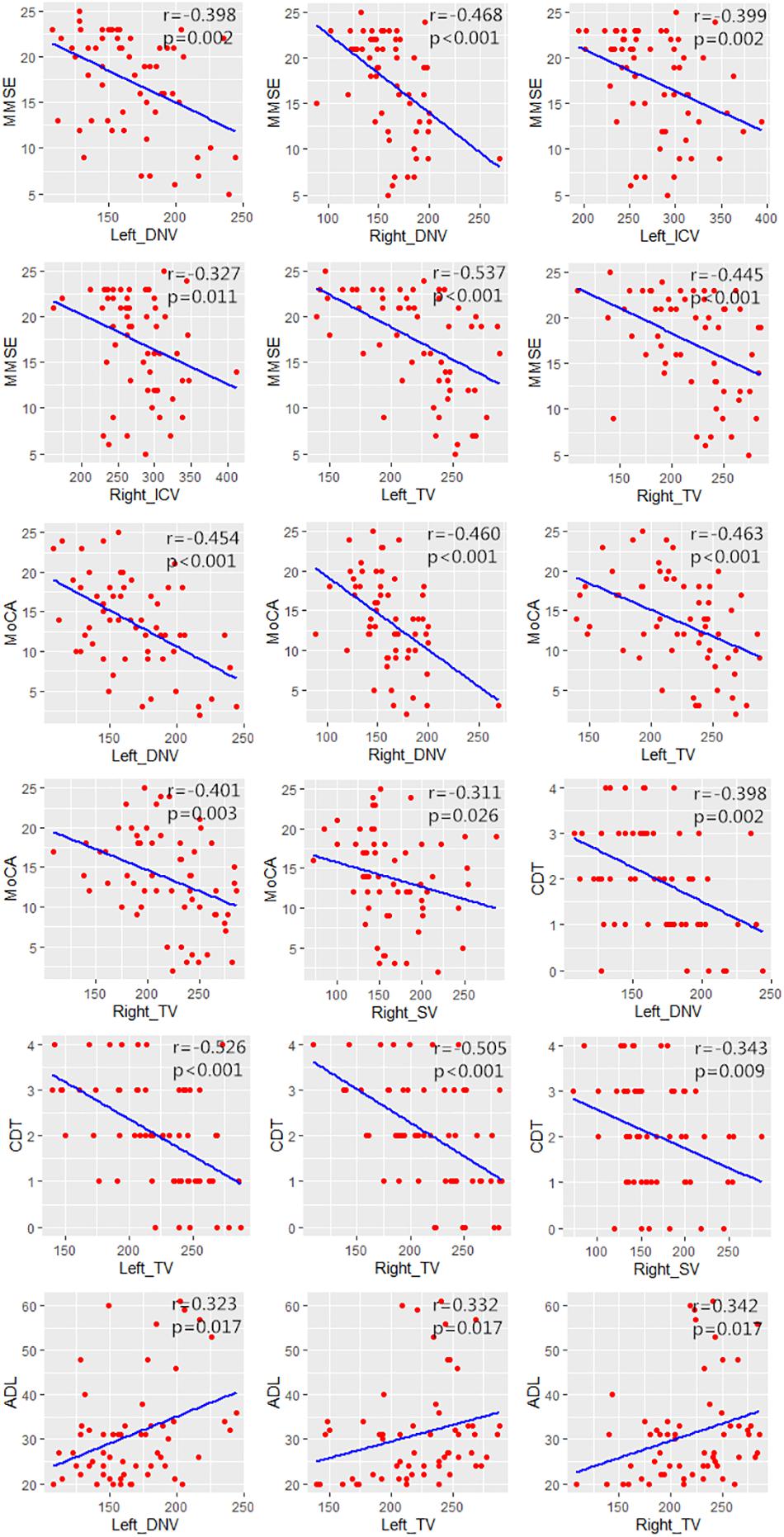 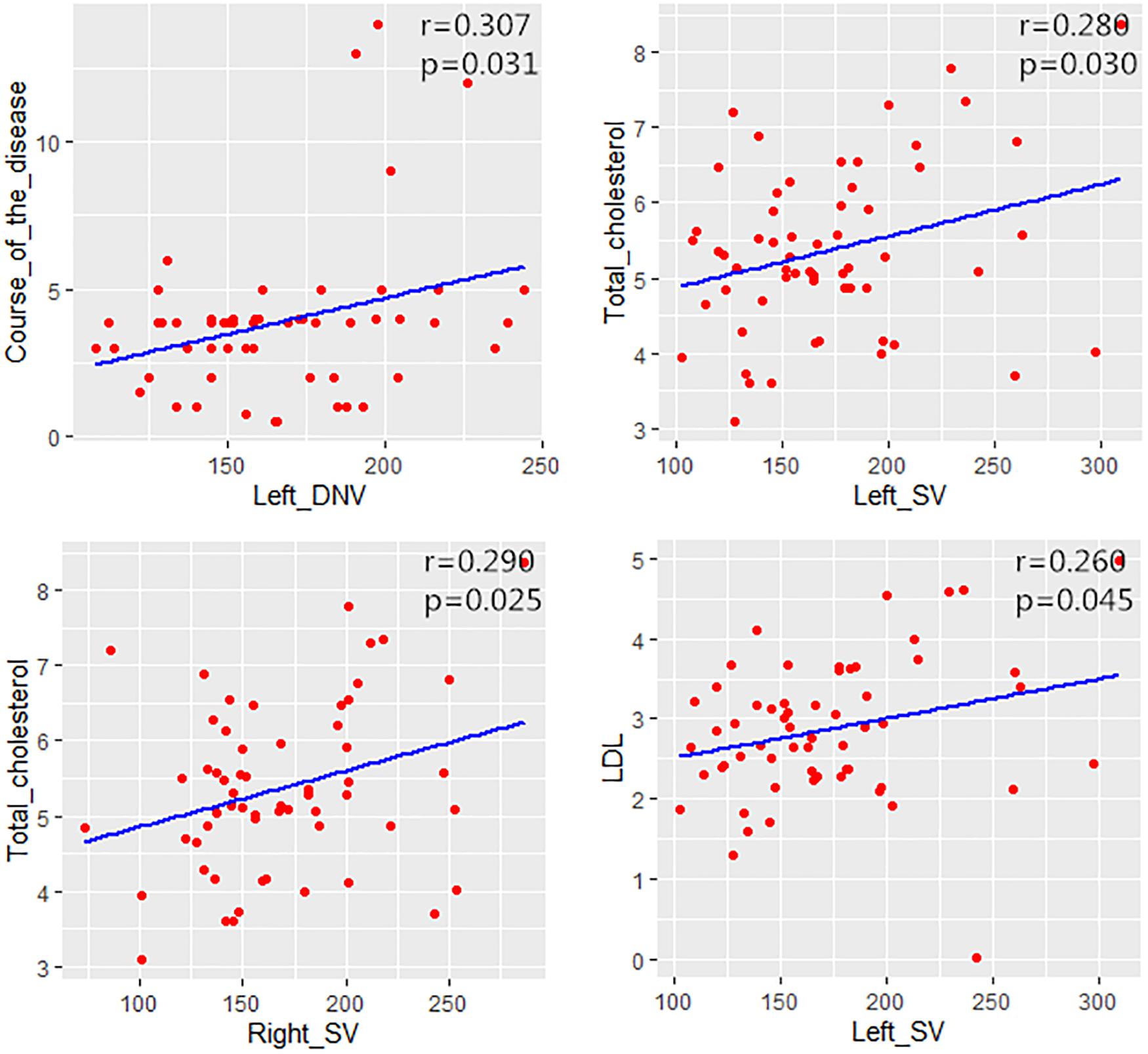 Figure 5. Scatter plots showing the correlation between MSV of cerebral veins and the course of the disease, total cholesterol and LDL in AD group.

Venous oxygen level is an important factor for evaluating brain development and function. Under normal conditions, the brain consumes 20% of the total energy of the body through oxidative metabolism (Gallagher et al., 1998). The measurement of venous oxygen is crucial for analyzing the neuronal activity and brain physiology during aging and regulation of brain disease status (Donahue et al., 2009). Under normal conditions, blood oxygen level is in a relatively constant state. Nevertheless, abnormal condition, such as cerebrovascular and neurodegenerative diseases or brain trauma can affect brain oxygen levels, which may further lead to a decline of cognitive level. Previous studies have shown that vascular risk factors can participate in the pathogenesis and progression of AD (Li et al., 2011; Zhu et al., 2014; Inzelberg et al., 2015).

Previous studies have found that AD is associated with blood–brain barrier (BBB) dysfunction. BBB is an important structure that maintains the microenvironment homeostasis of the central nervous system. It can prevent pathogens and other macromolecules from entering the brain through blood circulation, excrete metabolites from brain tissues, and participate in the cerebrospinal fluid regulation and immune response (Halliday et al., 2016). BBB dysfunction leads to the accumulation of metabolites in blood vessels, increases oxygen consumption, and further reduces the venous oxygen levels. Structural alterations, atherosclerotic lesions, and impaired hemodynamic may occur in the cerebral vessels of AD patients (Meyer et al., 2008), and the peripheral nerve tissue is accompanied by axonal loss and myelin dissolution (Gouw et al., 2008), which put the brain tissue of AD patients in a hypoxic state.

In this study, QSM was first used to quantify blood oxygen levels in cerebral veins of AD patients. We found that the oxygen level of bilateral cerebral veins in AD group was generally lower than that in CON group, in addition, the proportion of deoxyhemoglobin increased, which is consistent with previous studies. However, significant differences were observed only for left DNV and bilateral TV, thus suggesting that besides the relationship between MSV and the content of deoxyhemoglobin in blood vessel, diameter of blood vessel is another important factor for the diagnosis of AD patients. Blood vessels with the small diameter are easily affected by the slice and partial volume effect during the measurement process, which leads to some deviations in the measurement results.

Our findings showed the MSV of the left DNV was positively correlated with the course of disease, indicating that the longer course of disease led to lower oxygen levels of the left DNV. The development of AD is an irreversible pathological process. Consequently, the longer course of AD, leads to more serious conditions, while the decrease of cerebral venous oxygen level is positively correlated with the deterioration of the disease.

In this study, the MSV of bilateral SV were positively correlated with the total cholesterol, and the MSV of left SV had a positive correlation with LDL. We suggested that dyslipidemia influences the cerebral blood perfusion through vascular disease, further leads to decreasing of cerebral oxygen level. Previous studies have reported that, dyslipidemia was a key factor of metabolic syndrome, and increases the risk of AD (Gentile et al., 2020). Wingo et al. (2019) found that elevated LDL levels were associated with higher probability of having early-onset AD, this novel findings highlight the important role of LDL in AD pathogenesis. Besides, increased plasma homocysteine level is a strong, independent risk factor for the development of AD (Seshadri et al., 2002). However, no correlation was found between MSV of cerebral veins and homocysteine levels.

The present study has some limitations: (1) this study was a retrospective study and our subjects were all inpatients, who consulted our hospital due to obvious symptoms. The course of the disease was relatively long and the symptoms were relatively severe. Also, there were few patients with mild cognitive impairment who were not included in this study, which should be addressed by further research. (2) The AD group and CON group were of different size, thus, larger sample size is needed to reduce errors. (3) The ROI in this study was manually placed, which will inevitably lead to certain errors.

Decreasing cerebral venous oxygen level in AD patients may affect cognitive status, and associated with the deterioration of the disease in AD patients.

The studies involving human participants were reviewed and approved by the Ethics Committee of First Affiliated Hospital of Dalian Medical University. The patients/participants provided their written informed consent to participate in this study. Written informed consent was obtained from the individual(s) for the publication of any potentially identifiable images or data included in this article.

LX was employed by GE Healthcare.

The Supplementary Material for this article can be found online at: https://www.frontiersin.org/articles/10.3389/fnins.2020.570848/full#supplementary-material

Copyright © 2021 Liu, Dong, Song, Zhang, Wang, Gao, Tian, Dong, Liang, Xie and Miao. This is an open-access article distributed under the terms of the Creative Commons Attribution License (CC BY). The use, distribution or reproduction in other forums is permitted, provided the original author(s) and the copyright owner(s) are credited and that the original publication in this journal is cited, in accordance with accepted academic practice. No use, distribution or reproduction is permitted which does not comply with these terms.