Alzheimer’s disease (AD) is the most common neurodegenerative disease that causes cognitive and memory impairment (Castellani et al., 2010; Jia et al., 2014). The main pathological hallmarks of AD include extracellular senile plaques containing β-amyloid (Aβ) and intracellular neurofibrillary tangles formed by phosphorylated tau (Huang and Mucke, 2012; Long and Holtzman, 2019). Recent studies have shown that fibrinogen also plays an important role in the pathogenesis of AD (Cortes-Canteli and Strickland, 2009). Fibrinogen can bind to Aβ, which intensifies inflammation in the AD brain and accelerates the decline of cognitive function in AD patients (Ahn et al., 2014; Merlini et al., 2019). The Aβ-fibrinogen interaction may be crucial to the progression of neurovascular damage and cognitive impairment in AD (Xu et al., 2008; Cortes-Canteli et al., 2010). However, there are few clinical studies on the relationship between fibrinogen and Aβ. This study aims to explore the relationship between fibrinogen and Aβ levels in AD patients and normal people.

Alzheimer’s disease patients were recruited from Chongqing Daping Hospital from December 2018 to May 2020. Age- and gender-matched controls with normal cognition were randomly recruited from the hospital at the same time. Subjects were excluded for the following reasons: (1) a family history of dementia; (2) a concomitant neurologic disorder that could potentially affect the cognitive function or other types of dementia; (3) severe cardiac, pulmonary, hepatic, or renal diseases or any type of tumor; (4) enduring mental illness (e.g., schizophrenia); (5) Diseases that may affect fibrinogen levels (e.g., bleeding disorders, hereditary abnormal fibrinogenemia, etc.); (6) Recently used treatments that affect fibrinogen levels (e.g., blood transfusion); (7) an allergy to the 11C-Pittsburgh compound.

The diagnosis of AD was made according to the criteria of the National Institute of Neurological and Communicative Diseases and Stroke/AD and Related Disorders Association following the protocols we used before (Li et al., 2011). Besides, the patients who collected blood all received Aβ positron emission tomography (PET) examination of Pittsburgh compound B (PiB), and the diagnostic criteria were PiB-PET positive. The demographic data and medical history (such as hypertension, coronary heart disease, and diabetes mellitus) were collected and the cognitive and functional status was assessed based on a neuropsychological battery. Fasting blood was collected between 07:00 and 09:00 to avoid the potential circadian rhythm influence. The blood samples were centrifuged within an hour of collection and EDTA plasma was aliquoted in 0.5 mL polypropylene tubes and stored at −80°C until used. The cerebrospinal fluid (CSF) samples were centrifuged at 2,000g at 4°C for 10 min, and the aliquots were then immediately frozen and stored at −80°C until use. The informed consent was obtained before the acquisition of the blood and CSF samples.

The differences in demographic characteristics and fibrinogen levels between the groups were assessed with two-tailed independent t-tests, Mann–Whitney U test, or Chi-square test. Spearman correlation analyses were used to examine the correlations between fibrinogen levels and Aβ levels. The data are expressed as the mean ± standard deviation (SD). All hypothesis testing was two-sided, and p < 0.05 was defined as statistically significant. The computations were performed with SPSS version 20.0 (SPSS Inc., United States).

Characteristics of the Study Population 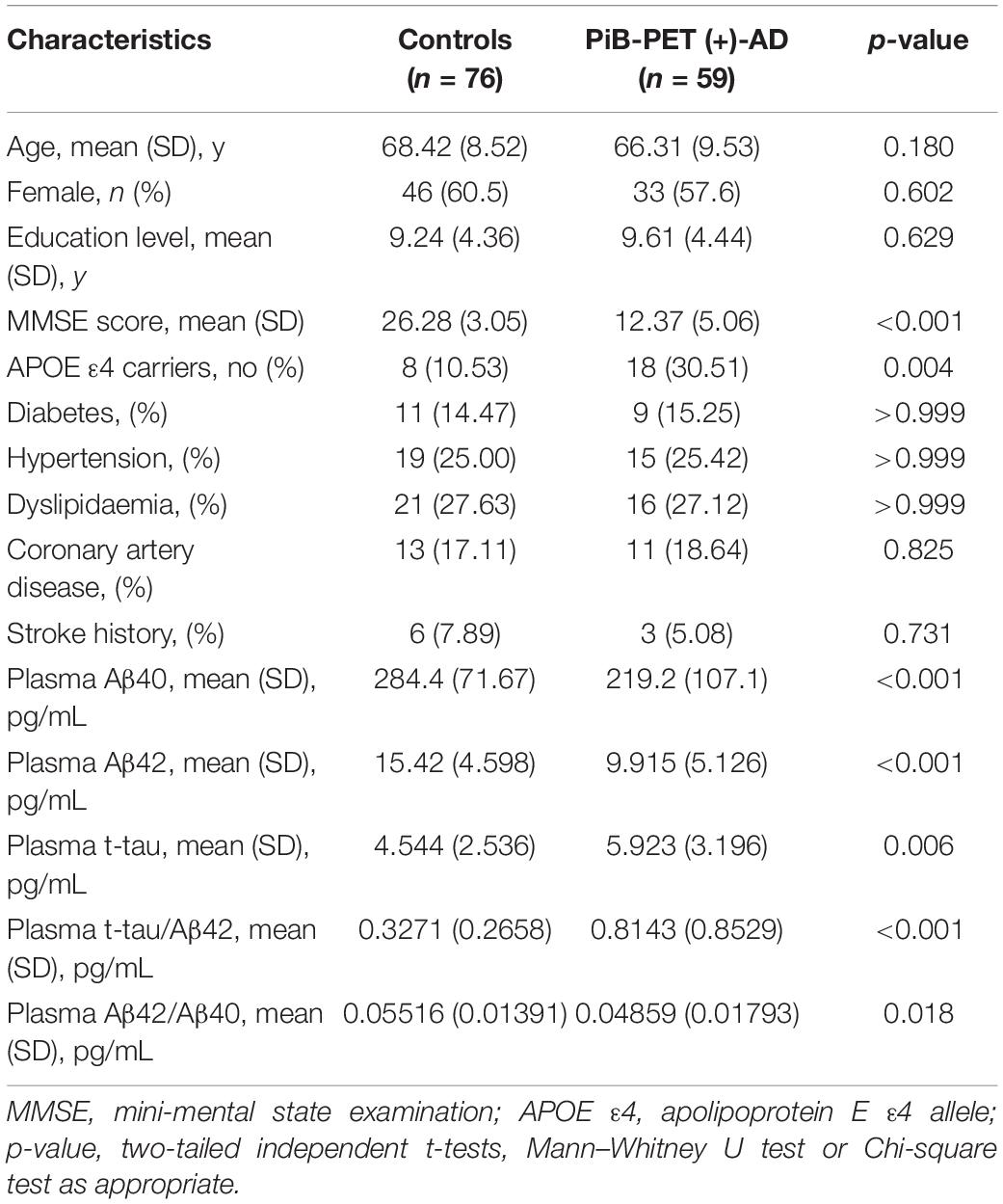 Table 1. Characteristics of the participants with plasma samples. 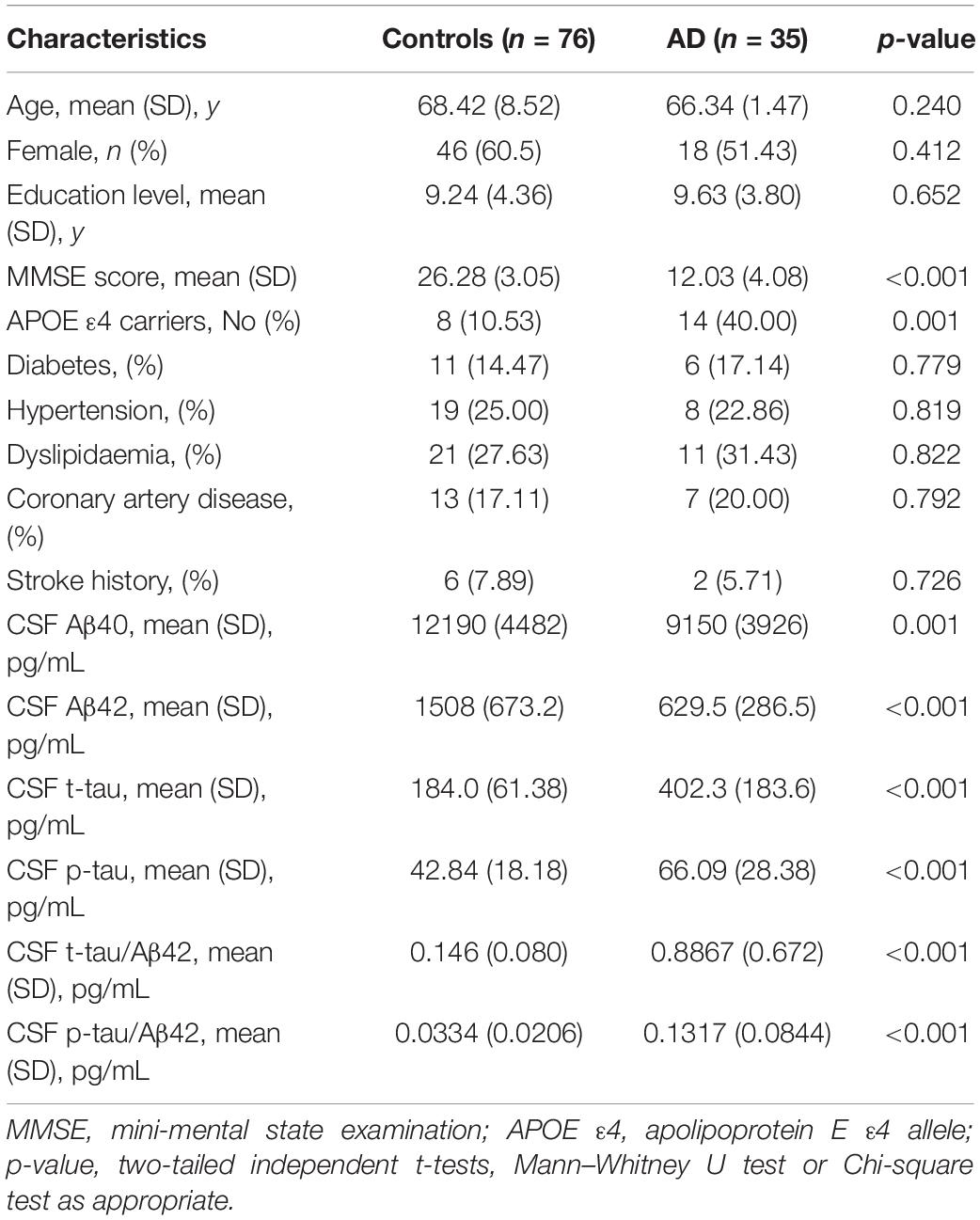 Table 2. Characteristics of the participants with CSF samples. 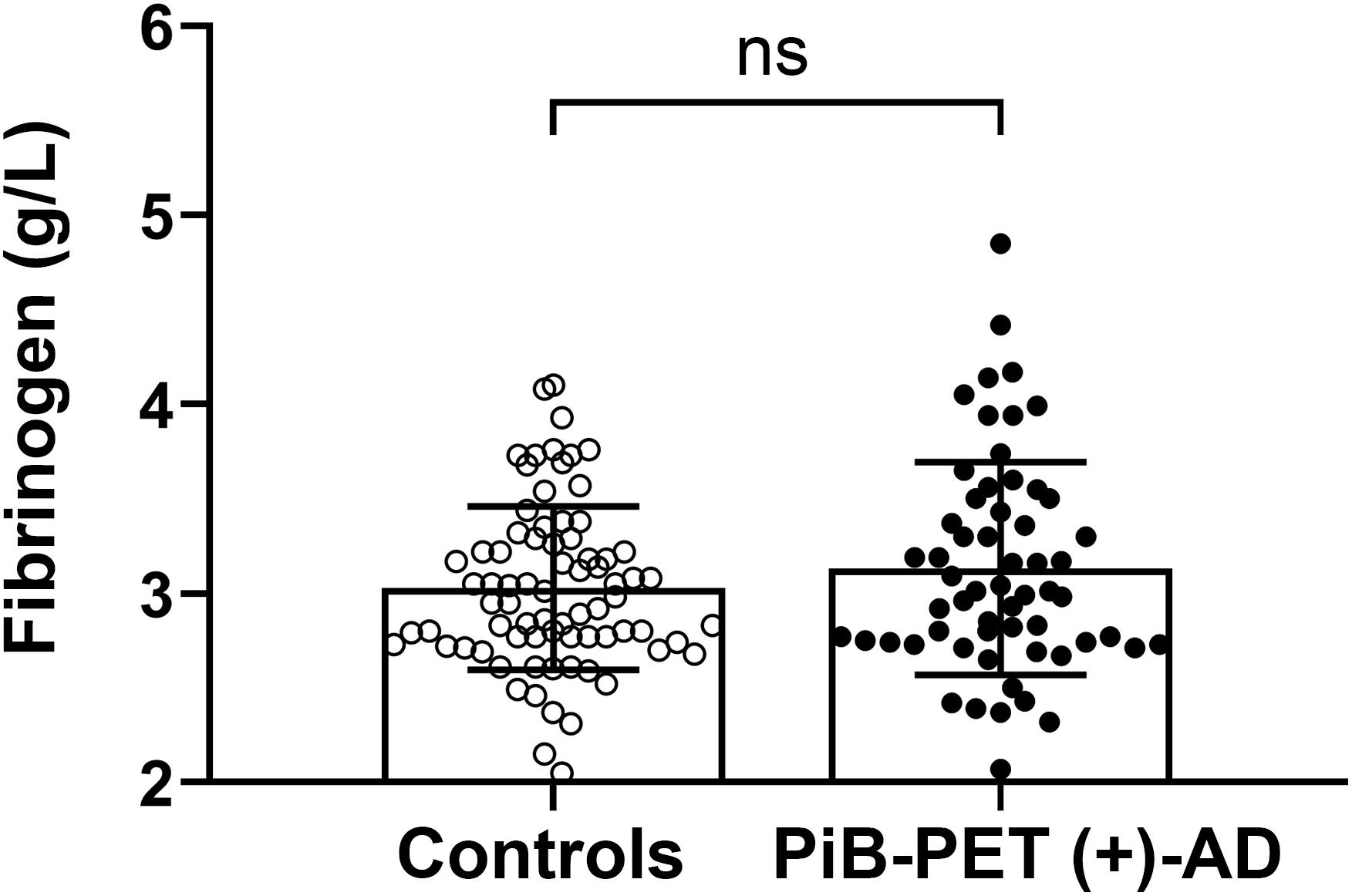 Figure 1. Comparison of the plasma fibrinogen levels between the controls and PiB-PET (+)-AD patients. ns denotes no statistical significance.

Figure 2. Correlations between fibrinogen levels with plasma Aβ42 levels (A) and Aβ40 levels (B) in AD patients diagnosed by positive PiB-PET and normal controls (NC). 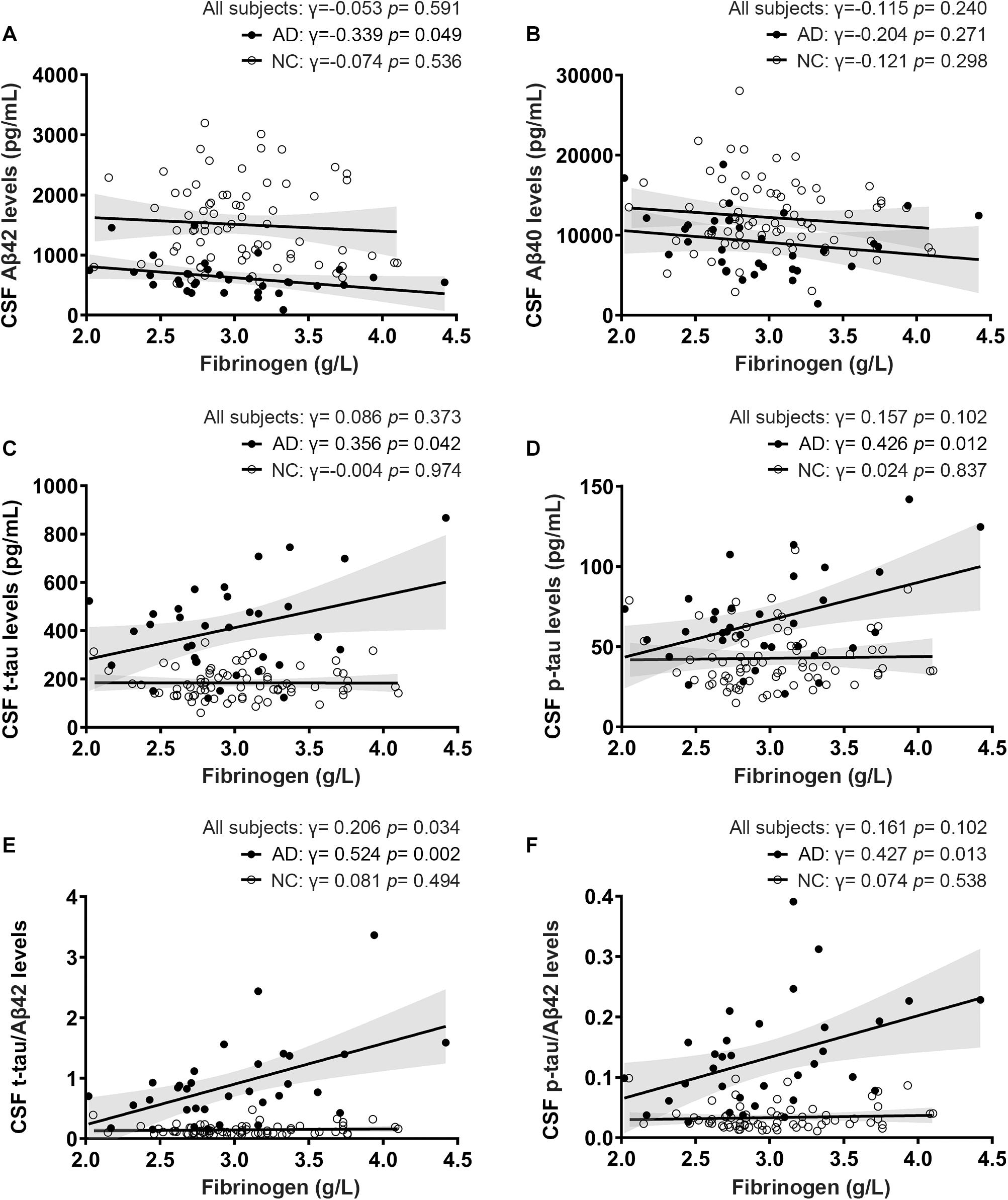 Previous studies have shown that the destruction of the blood-brain barrier can cause fibrinogen to enter the brain and accelerate neuronal damage in the pathological process of neurological diseases such as AD (Adams et al., 2004). Therefore, compared with normal people, the pathological development may be aggravated due to a large amount of fibrinogen in the brain of AD patients (Lipinski and Sajdel-Sulkowska, 2006; Cortes-Canteli et al., 2014), and the cognitive function of AD patients decreases as their plasma fibrinogen levels increase (Oijen et al., 2006; Xu et al., 2008). In this study, we found that plasma and CSF Aβ levels in AD patients were significantly correlated with their plasma fibrinogen levels, which further provided clinical evidence that fibrinogen may involve in the development of AD pathological damage.

Platelets are the main place where Aβ is produced in the periphery, so the activation of platelets will increase the production of peripheral Aβ (Chen et al., 1995; Shen et al., 2008). Fibrinogen can induce platelet aggregation and activation, leading to more blood Aβ formation (Bennett, 2001; Chen et al., 2003). The fibrinogen in the brain of AD patients will combine with Aβ deposition to form oligomers with abnormal structures, resulting in a decrease of free fibrinogen levels in the plasma (Ahn et al., 2010). This is also the possible reason why the plasma fibrinogen in AD patients is not significantly increased. These oligomers are difficult to degrade, they can block blood vessels, cause thrombosis and abnormal fibrinolysis, reduce cerebral blood flow perfusion, accelerate neurovascular injury and neuroinflammation, and aggravate the formation of amyloid angiopathy (CAA) (Paul et al., 2007; Cortes-Canteli et al., 2010). The increased binding affinity of Aβ to fibrinogen will aggravate the above process and lead to the occurrence of hereditary cerebral amyloid angiopathy (HCAA) (Cajamarca et al., 2020). In addition to forming complexes with Aβ, fibrinogen in cerebral blood vessels will also form clots with the help of APOE ϵ4 gene and homocysteine, leading to more Aβ deposition in the cerebral blood vessel wall and CAA formation (Hultman et al., 2013; Chung et al., 2016). Besides, too much fibrinogen in the brain can also lead to insufficient cerebral perfusion, aggravating cerebral hypoxia, and the formation of Aβ plaques in AD patients (Miners et al., 2018). Animal studies have also observed that removing this part of fibrinogen can alleviate AD-related pathologies in the brain of mice and improve cognitive impairment (Cortes-Canteli et al., 2010). Therefore, there is a positive correlation between plasma Aβ and fibrinogen levels, and a negative correlation between CSF Aβ and fibrinogen levels in AD patients, and the more stable Aβ42 has a better correlation, while the integrity of the blood-brain barrier in normal people is not destroyed, which may be the reason for the lack of correlation between them.

According to the Aβ cascade hypothesis, the increase of Aβ can further induce the hyperphosphorylation of the microtubule-associated protein tau and accumulation in the cells, forming AD-related pathological changes such as neurofibrillary tangles, and leading to increased levels of t-tau and p-tau in the CSF of AD patients (Huang and Mucke, 2012). This may explain the positive correlation between tau and fibrinogen levels in AD patients. But so far there is no direct evidence that fibrinogen can exacerbate tau phosphorylation.

In addition to the Aβ pathway, previous studies have also found that fibrinogen can directly affect neuroinflammation by inducing the activation of microglia through CD11b/CD18 integrin receptors and other means (Ryu et al., 2009). Blocking this approach can reduce neuroinflammation, synaptic dysfunction, and cognitive decline in AD mice (Merlini et al., 2019). Fibrinogen may play an important role in the pathogenesis of AD.

This study provides clinical evidence for the relationship between fibrinogen and AD, suggesting that fibrinogen may play a role in the pathogenesis of AD. It is worth noting that this is a cross-sectional observational study, we cannot determine the effect of fibrinogen on the progression of AD. To further clarify the impact, cohort studies need to be continued in the future. In addition, we need to increase the number of CSF samples from AD patients, adopt more accurate detection methods for CSF biomarkers such as SIMOA, and further analyze the correlation between fibrinogen and amyloid-PET SUVR to better verify the effect of fibrinogen on Aβ deposition in the brain. At the same time, whether drugs to reduce fibrinogen will improve the cognitive function decline of AD patients remains to be further studied.

Our research shows that plasma fibrinogen levels are positively correlated with Aβ levels in the plasma and brain in AD patients, which further shows that fibrinogen can promote Aβ deposition in the brain and accelerate tau phosphorylation. Fibrinogen may be involved in the pathogenesis of AD.

The studies involving human participants were reviewed and approved by the Institutional Review Board of Daping Hospital. The patients/participants provided their written informed consent to participate in this study.

This study was supported by the Natural Science Foundation Project of Chongqing (No. cstc2020jcyj-msxmX0132).

The Supplementary Material for this article can be found online at: https://www.frontiersin.org/articles/10.3389/fnins.2020.625844/full#supplementary-material

Copyright © 2021 Fan, Sun, Sun, Jian, Li, Shen, Zeng, Wang and Bu. This is an open-access article distributed under the terms of the Creative Commons Attribution License (CC BY). The use, distribution or reproduction in other forums is permitted, provided the original author(s) and the copyright owner(s) are credited and that the original publication in this journal is cited, in accordance with accepted academic practice. No use, distribution or reproduction is permitted which does not comply with these terms.

Deciphering the biomarkers of Alzheimer’s disease