Background: Although pericallosal artery aneurysms (PAAs) are relatively uncommon, accounting for only 1–9% of all intracranial aneurysms (IAs), they exhibit a considerably high propensity to rupture. Nevertheless, our current knowledge of the risk factors for PAA rupture is still very limited. To fill this gap, we investigated rupture risk factors for PAAs based on morphological computer-assisted semiautomated measurement (CASAM) and hemodynamic analysis.

Methods: Patients with PAAs were selected from the IA database in our institute and their baseline data were collected. Morphological parameters were measured in all enrolled patients by applying CASAM. Computational fluid dynamics simulation (CFD) was performed to evaluate the hemodynamic difference between ruptured and unruptured PAAs.

Conclusion: This preliminary study indicates that there are morphological and hemodynamic differences between ruptured and unruptured PAAs. In particular, a high mean OSI is an independent risk factor for PAA rupture. Further research with a larger sample size is warranted in the future.

We retrospectively reviewed our prospectively collected database of 2141 consecutive patients with IAs who underwent microsurgery or interventional therapy between June 2017 and June 2020. Traumatic, dissecting, and fusiform aneurysms were excluded prior to the initial screening. Of those patients, 47 had PAAs, accounting for 2.20% of the 2141 patients with IAs. Of the 47 patients with PAAs, 16 had two-dimensional (2D) digital subtraction angiography (DSA) data only, which did not fulfill the requirements of CASAM and hemodynamic analysis. Therefore, the present analysis included the remaining 31 patients with 32 PAAs (20 unruptured and 12 ruptured) who underwent three-dimensional (3D) DSA in the final analysis. Baseline and clinical patient data were collected from the medical records and the aneurysm database.

Each patient-specific 3D model was subdivided into the aneurysm sac and parent artery regions before meshing. Parent artery was defined as a 20-mm long segment of vessel surrounding the aneurysm sac. Then, the geometry of each 3D model was imported into ICEM CFD software (ANSYS Inc., Canonsburg, PA, United States). Different mesh sizes were set for different parts. For the inlet, outlet, and sac, we chose a mesh size of 0.1 mm, which is appropriate for aneurysms in the typical size range; for the parent artery, we used a mesh size of 0.3 mm.

The total number of finite-volume tetrahedral grid elements was approximately 1 million, and four layers of prism elements were used for the CFD simulations. The elements number was set based on grid-independence analysis to obtain high quality simulation results. The Navier–Stokes equations were the governing equations employed in the current study.

After meshing, ANSYS CFX 18.0 (ANSYS Inc.) was used for hemodynamic simulation. For the model, blood was assumed to be a Newtonian fluid with a density of 1060 kg/m3 and a dynamic viscosity of 0.0035 N s/m2. The vessel wall was assumed to be rigid with a no-slip boundary. Because the patient-specific boundary conditions were not available, the inflow boundary condition was a representative pulsatile velocity profile obtained from the average normal human (Ford et al., 2005). A traction-free boundary condition was applied to all outlets (Cebral et al., 2005). Initial pressure and velocity were set to zero. Three cardiac cycles were simulated to minimize transient numerical errors. The results from the third simulated cardiac cycle were collected as output for the final analyses. Validation of these methods (consistency, reliability) has been demonstrated in our previous publication (Hu et al., 2015a,b). A flowchart demonstrating an outline of the image reconstruction and CFD procedures is included in Supplementary Figure 1.

Several common and important hemodynamic parameters were quantified and used to characterize the hemodynamics of IAs. Normalized wall shear stress (NWSS) and normalized pressure (NP), defined as the WSS and pressure of the aneurysm wall divided by that of the parent artery wall, respectively, were calculated to allow comparisons among different patients (Jou et al., 2008; Yuan et al., 2020). The wall shear stress gradient (WSSG) was calculated based on the simulated pulsatile flow simulations (Hu et al., 2015a,b). The oscillatory shear index (OSI) is a non-dimensional parameter that is defined as the directional change in WSS during the cardiac cycle (Soldozy et al., 2019). The combined hemodynamic parameter (CHP) can be defined as a weighted average of the WSS and OSI so that each hemodynamic parameter contributes proportionately to the final CHP (Cho et al., 2018). The relative residence time (RRT) is a marker of disturbed blood flow, that incorporates particle variability during the cardiac cycle (Riccardello et al., 2018). Ultimately, hemodynamic parameters, including NWSS, NP, WSSG, CHP, RRT, and OSI, were calculated to evaluate the hemodynamic difference between the ruptured and unruptured PAAs. To ensure repeatability, all measurements were conducted at least twice.

The mean age of the patients in the PAA cohort was 57.65 ± 9.97 years (range: 33–84 years). A total of 59.4% (19/32) of the PAAs were located at the bifurcation of the callosomarginal artery in the A3 segment, and no significant difference in baseline and morphological characteristics was detected between the ruptured and unruptured groups. Overall, there was little significant difference in the baseline and morphologic characteristics between ruptured and unruptured PAAs, and only AR was significantly higher in the ruptured group than in the unruptured group (P = 0.045) (Table 1). 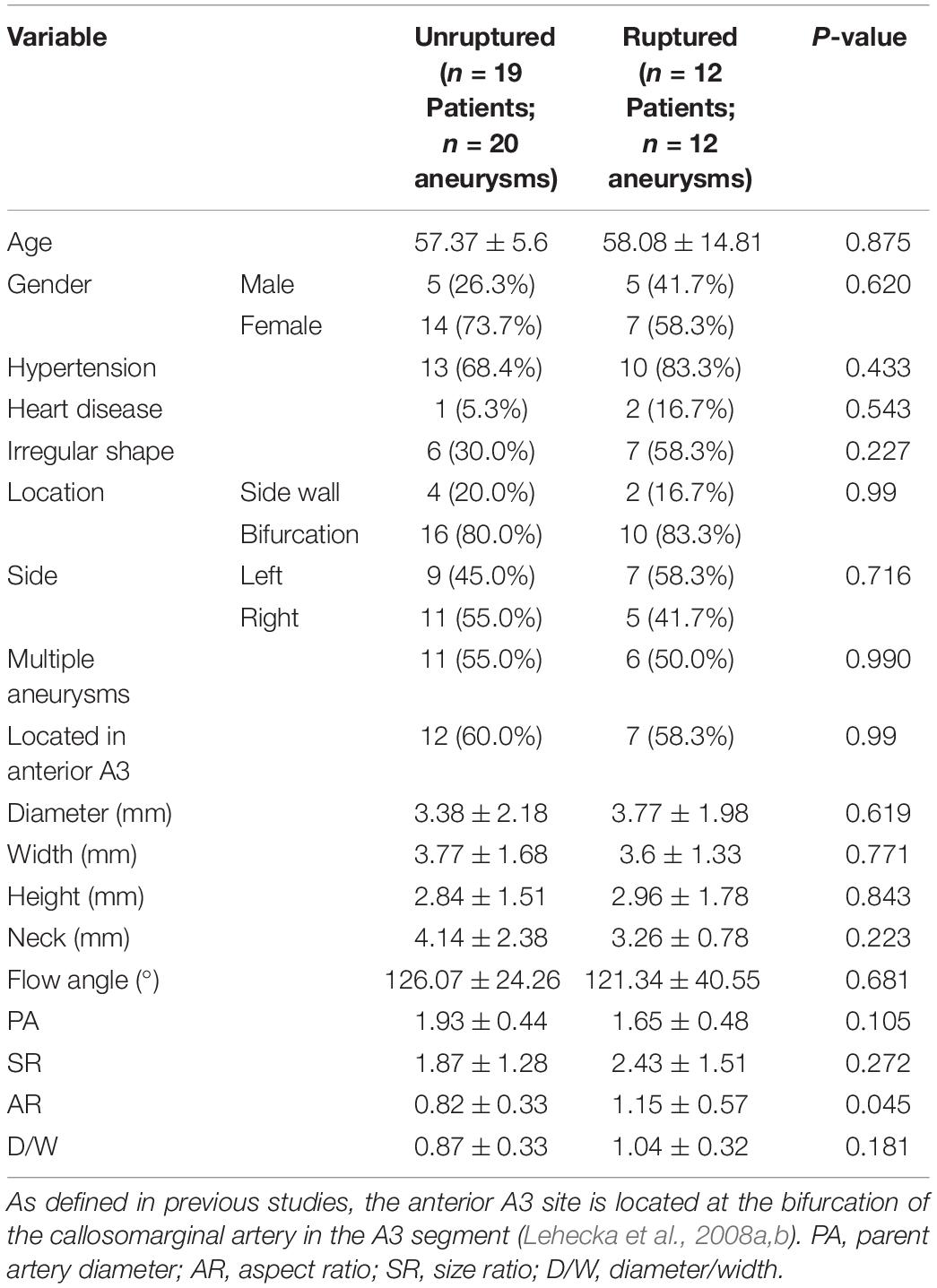 Table 1. Baseline and morphological characteristics of the included patients and aneurysms.

According to the results of the quantitative hemodynamic analysis shown in Table 2, the mean OSI was significantly higher in the ruptured group than in the unruptured group (P = 0.035), and the mean NWSS was significantly lower in the ruptured group than in the unruptured group (P = 0.012). ROC curve analysis was performed to evaluate the predictive value of the variables for the rupture of PAAs (Figure 2). The largest AUC was that of the mean OSI (AUC = 0.808), and the AUC of mean NWSS (AUC = 0.733) ranked second, followed by the AUC of the AR (AUC = 0.712). The optimal threshold for mean OSI was 0.009875 with 75.0% sensitivity and 85.0% specificity. The optimal threshold for the mean NWSS was 0.78, which provided 91.7% sensitivity and 55.0% specificity. The optimal threshold for AR was 0.82, with a sensitivity of 75% and specificity of 65%. Factors in univariate analysis with P < 0.05 were subsequently used in a multivariable binary logistic regression analysis, including AR, mean NWSS, and mean OSI. The results of the multivariate analysis indicated that a high mean OSI was significantly associated with PAA rupture (OR = 6.45, 95% CI 1.37–30.32, P = 0.018). Multiple vital hemodynamic parameters are compared between several typical ruptured and unruptured typical PAAs in Figure 3. 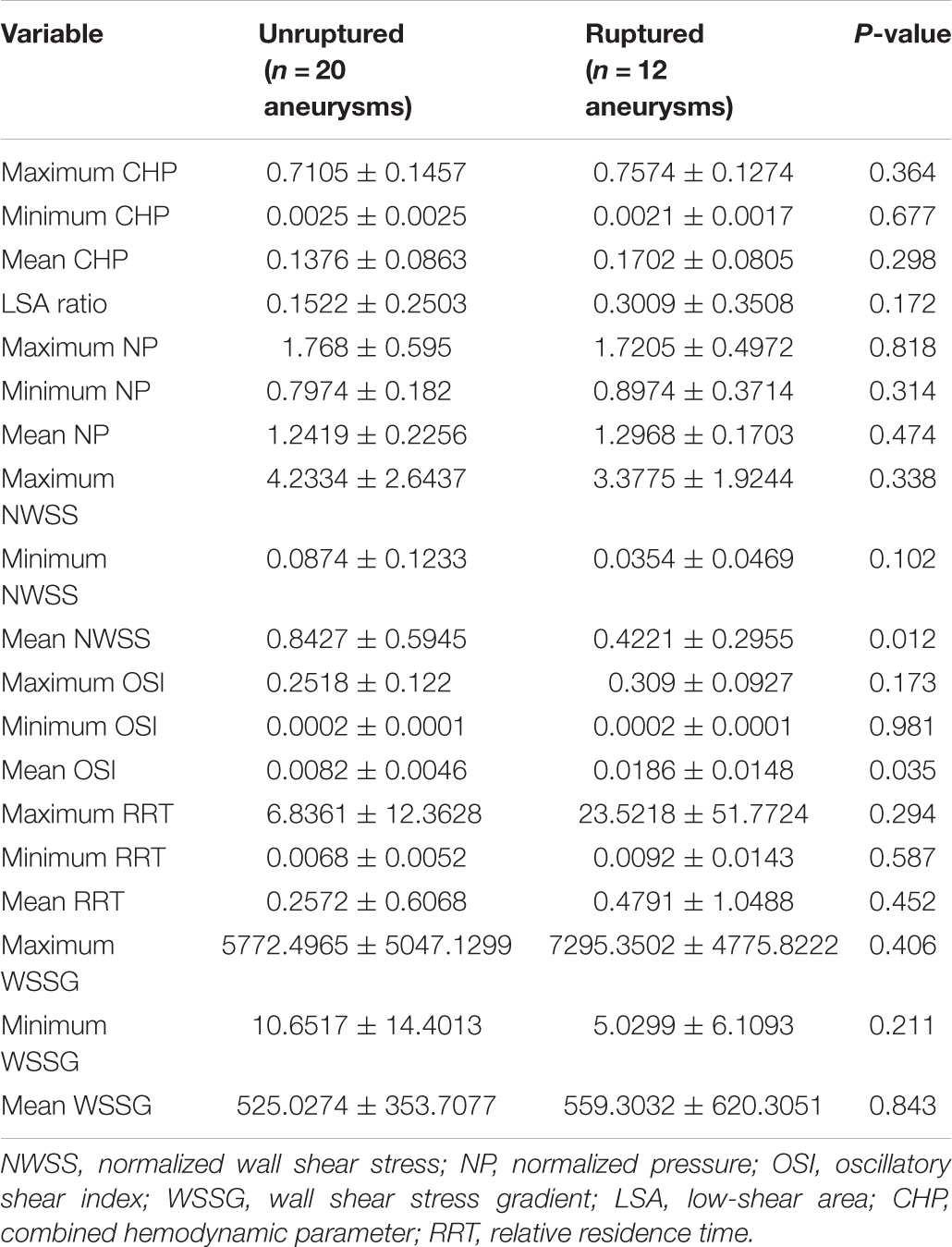 Table 2. Hemodynamic parameters of the ruptured and unruptured PAA groups. 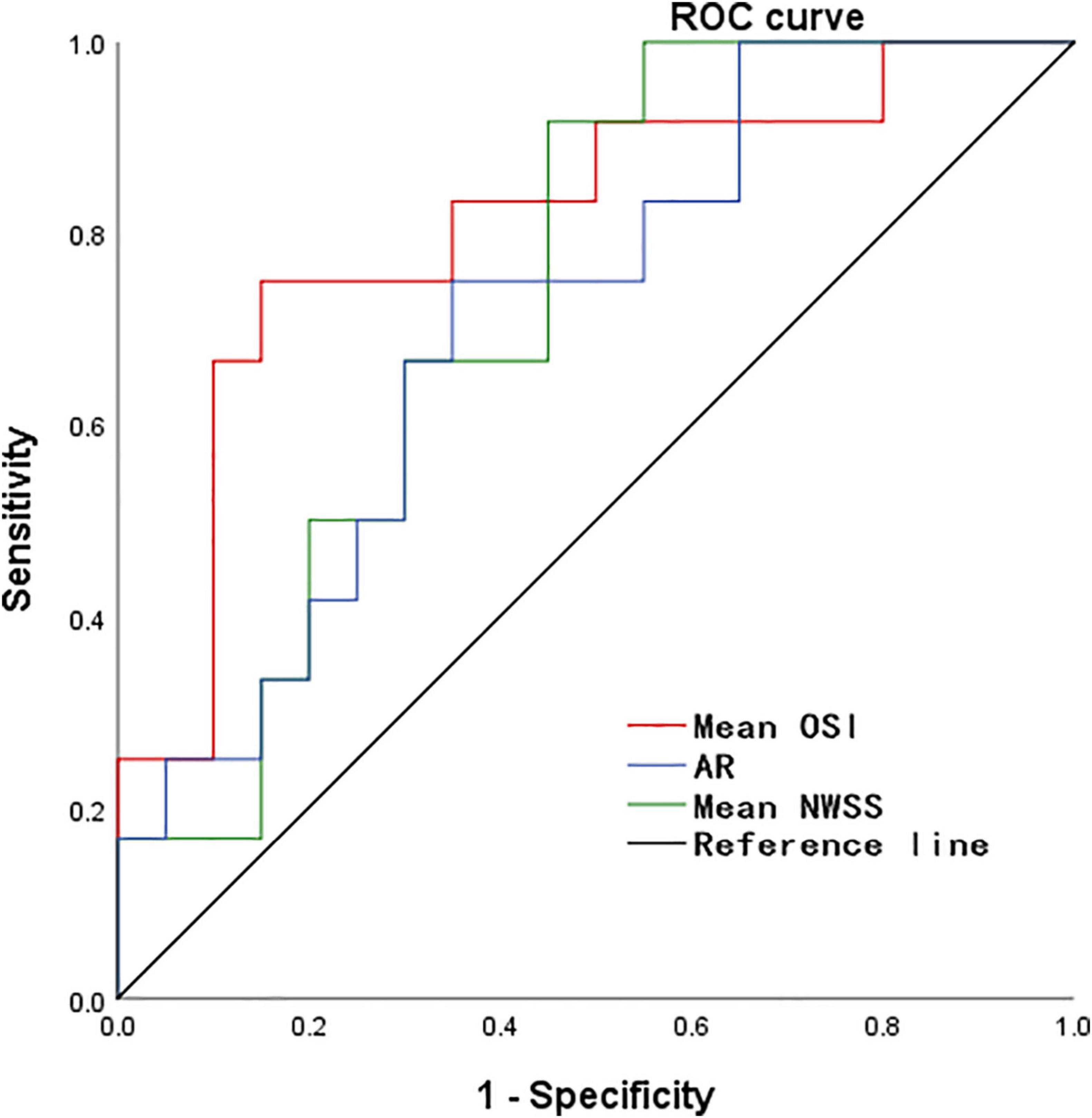 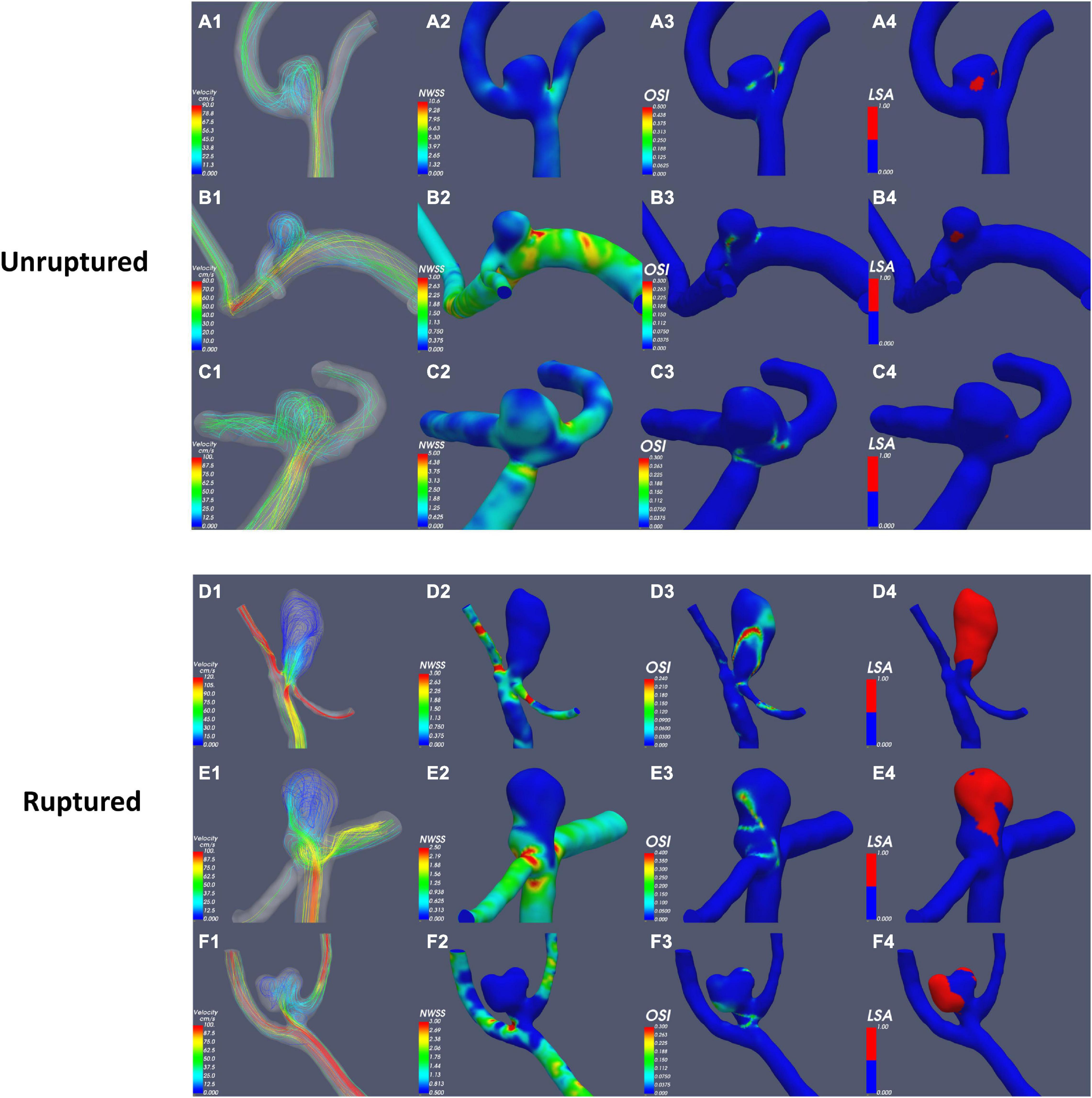 To the best of our knowledge, this is the first study that assess hemodynamics and morphology simultaneously to evaluate the rupture risk of PAAs. In the present study, the results of the univariate analysis revealed that ruptured PAAs had significantly higher AR, mean NWSS, and mean OSI values than unruptured PAAs. AR represents the diameter-to-neck ratio, high AR of ruptured PAAs means that they have a relatively small neck area that limits the blood flow in the aneurysm sac and induces relatively slow and inconsistent flow in the aneurysm sac (Nader-Sepahi et al., 2004; Tateshima et al., 2010). As AR increases, vortices gradually appear in the aneurysm sac, and the flow velocity decreases (Ujiie et al., 1999; Tykocki et al., 2014). Most previous studies have indicated that AR is positively correlated with the risk of aneurysm rupture, consistent with our results (Ryu et al., 2011; Soldozy et al., 2019).

WSS is the frictional force induced by blood flow acting on the endothelium of the vessel wall, whose direction is parallel to local blood flow (Soldozy et al., 2019). For comparisons among different patients, NWSS was calculated for the hemodynamic analysis; this variable is defined as the WSS of the aneurysm wall divided by that of the parent artery wall. Low WSS was usually considered to be associated with aneurysm rupture (Miura et al., 2013; Soldozy et al., 2019), consistent with our finding that ruptured PAAs had significantly lower NWSS. OSI is a non-dimensional parameter that is defined as the directional change in WSS during the cardiac cycle; this frequency-based parameter has been used to quantify IA rupture (Soldozy et al., 2019). Our results indicated that a high mean OSI was an independent risk factor for PAA rupture (OR = 6.45, 95% CI 1.37–30.32, P = 0.018). OSI reflects the temporal variation in the blood flow direction, and the temporal variations in blood flow can be illustrated by the continuously emerging and disappearing vortices of blood flow throughout the cardiac cycle (Can and Du, 2016; Soldozy et al., 2019). OSI reflects the shape of the aneurysm and its parent artery because aneurysmal geometry and hemodynamics are intertwined, consistent with our finding (see above) that ruptured PAAs tend to have a relatively elongated shape as well as inconsistent flow.

Despite comprehensive screen, in an aneurysm cohort of 2141 patients, only 2.20% of them had PAAs. The primary limitation of this study was the small sample size, which might limit its generalizability. Second, the 3D DSA examination used for the hemodynamic study was not administered to all patients with PAAs, which caused a certain degree of selective bias. To overcome these limitations, further analysis with more adequate data is warranted in the future.

This study suggested that there were morphological and hemodynamic differences between ruptured and unruptured PAAs. In particular, a high mean OSI is an independent risk factor for PAA rupture. These findings should be considered preliminary until confirmed in larger studies.

XZ, JG, CZ, CL, JY, NJ, SX, GF, PH, and HZ contributed to the conception, design, analysis, and interpretation of the data as well as to drafting the manuscript and revising it critically. All authors have read and approved the final version of the manuscript.

This work was supported by the National Key R&D Program of China with grant 2016YFC1300800, Beijing Municipal Administration of Hospitals’ Ascent Plan with grant DFL20180801, and the Beijing Scientific and Technologic Project (Z201100005520021).

The Supplementary Material for this article can be found online at: https://www.frontiersin.org/articles/10.3389/fnins.2021.759806/full#supplementary-material

Supplementary Figure 1 | Flowchart of image reconstruction and CFD procedures based on patient-specific angiogram.

Copyright © 2021 Zhai, Geng, Zhu, Yu, Li, Jiang, Xiang, Fang, Hu and Zhang. This is an open-access article distributed under the terms of the Creative Commons Attribution License (CC BY). The use, distribution or reproduction in other forums is permitted, provided the original author(s) and the copyright owner(s) are credited and that the original publication in this journal is cited, in accordance with accepted academic practice. No use, distribution or reproduction is permitted which does not comply with these terms.