Purpose/Objective(s): Stereotactic body radiation therapy (SBRT) has been shown to have increased local control and overall survival relative to conventional external beam radiation therapy in patients with medically inoperable stage I non-small cell lung cancer (NSCLC). Excellent rates of local control have been demonstrated both in clinical trials and in single-center studies at large academic institutions. However, there is limited data on the experiences of small academic hospitals with SBRT for stage I NSCLC. The purpose of this study is to report the local control and overall survival rates in patients treated with SBRT for stage I NSCLC at Winthrop-University Hospital (WUH), a small academic hospital.

Materials/Methods: This is a retrospective review of 78 stage I central and peripheral NSCLC tumors treated between December 2006 and July 2012 with SBRT at WUH. Treatment was given utilizing fiducials and a respiratory tracking system. If the fiducials were not trackable, a spine tracking system was used for tumor localization. CT-based planning was performed using the ray trace algorithm. Treatment was delivered over consecutive days to a median dose of 4800 cGy delivered in four fractions. The Kaplan–Meier method was used to calculate local control and overall survival.

Conclusion: Our findings support that local control and overall survival at a small academic hospital are comparable to that of larger academic institutions’ published experiences with SBRT for stage I NSCLC.

Stereotactic body radiation therapy (SBRT) is becoming the standard of care in medically inoperable patients with stage I NSCLC (1). SBRT has been shown to be superior to conventional radiation therapy with local control from 83 to 93% and 3-year overall survival from 47 to 84.7% (4, 6–10). Most of the data from SBRT have come from clinical trials and single-center studies at large academic institutions. Data from smaller academic hospitals are more limited. The goal of this paper is to report the local recurrence rate and overall survival of patients with stage I NSCLC treated with SBRT at our institution. Additionally, this study performs an analysis of the patient, tumor, and treatment characteristics that predict local control and overall survival.

This is a retrospective review of 78 stage I central and peripheral NSCLC tumors in 74 patients treated between December 2006 and July 2012 with SBRT at Winthrop-University Hospital (WUH). Peripheral tumors were defined at those >2 cm in all directions around the proximal bronchial tree. Patients who received CyberKnife for stage I NSCLC were identified from a WUH lung tumor registry. Patients were either medically inoperable or refused surgery. All patients were seen in conjunction with the Chairman of Thoracic Surgery to determine eligibility as to operability. It is primarily the decision of the Thoracic Surgeon who determines if a patient is a candidate for resection although the pulmonologist is often consulted. All patients had a PET/CT scan prior to treatment for staging purposes. As a general rule, PFTs were also obtained primarily to determine resectability. No patient had a FEV-1 <0.6 l. Patients who received chemotherapy or mediastinal radiation were excluded. All patients’ radiation oncology records were subsequently reviewed. This study was approved by our hospital’s institutional review board.

All 78 tumors were treated using a CyberKnife robotic linear accelerator. All patients were immobilized using a thermoplastic cast with arms up. One fiducial marker was placed at least 5 days prior either using CT guidance or navigational bronchoscopy to account for seed migration. CT imaging was performed using 1.5 mm cuts. Planning was performed using Multiplan (Accuray, Inc., Sunnyvale, CA, USA) inverse planning and delivered using the CyberKnife (Accuray, Inc.) with motion and respiratory tracking performed using the Synchrony system (Accuray, Inc.). For six tumors, the fiducials were not trackable, and a spine tracking system was used for tumor localization. The planning target volume (PTV) was created by adding a 5-mm margin to the GTV. In general, treatment was delivered over four consecutive days for central tumors to a dose of 4800 cGy delivered in four fractions (11). Peripheral tumors were treated to a dose of 6000 cGy in three consecutive fractions (6). The median dose delivered for all patients was 4800 cGy in four fractions. The various dose fractionation schemes are listed in Table 1. Patients treated with alternative dose fractionation schemes received prior radiation therapy. BED10Gy was calculated for each of our dose schedules using the formula nd(1 + d/α/β), where n is the fractionation number, d is the daily dose, and α/β is assumed to be 10 for tumors. Tissue corrections and dose heterogeneity corrections were used in the treatment planning process. Dose constraints for normal tissues were the same as those used in RTOG 0236 (6).

The primary endpoints of this study were local control, overall survival, and toxicities. Recurrence-free survival was also evaluated. Local failure was defined as tumor recurrence within or immediately adjacent to the treated field. Local control was defined as the absence of local failure. Recurrence-free survival was defined as the time from the end of treatment to occurrence of a local failure, mediastinal relapse, distant relapse, or death. Patients were followed up periodically using either CT scans or combined PET/CT scans. The most recent CT scan, PET/CT scan, or time to local failure was noted. Overall survival was determined by the most recent follow-up or time to death. Follow-up was based primarily on the radiation oncology records. In addition, any supplemental notes from other departments sent to the radiation oncology department were also used. Overall survival was confirmed using the social security death index.

The median follow-up for local control was 14.4 months. A total of seven local failures occurred in this study. The median time to local failure was 17 months with a range from 5 to 53 months. The 2-year local control rate was 87% (Figure 1). Median follow-up for overall survival was 18.8 months. The 2-year overall survival was 68% in this patient population (Figure 2). There were 16 cases (22%) of mediastinal failure, and 10 cases (14%) of distant metastases. There were 25 cases (34%) of recurrence of any form. The 2-year recurrence-free survival was 48.3% (Figure 3). 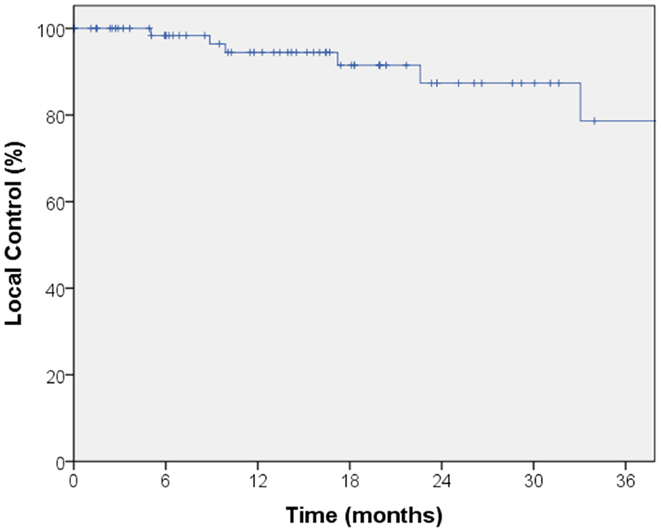 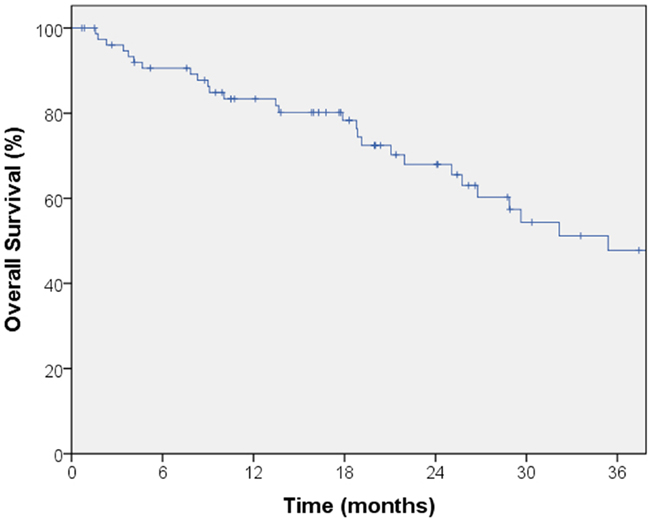 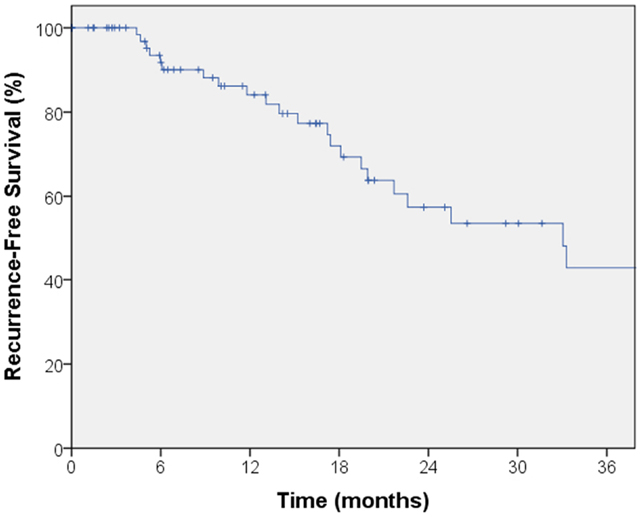 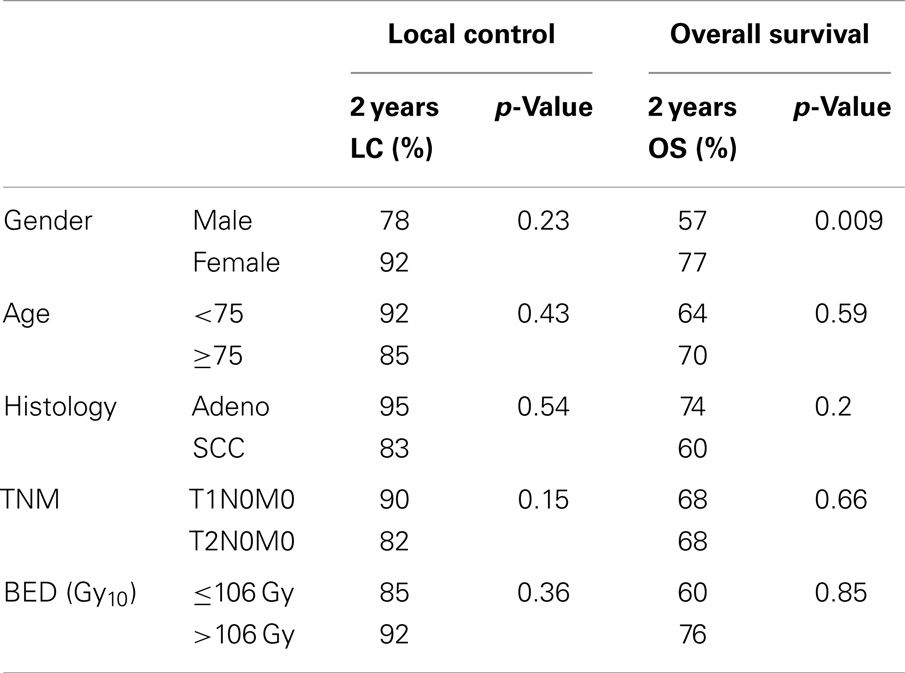 Clinical trials as well as single-center studies have shown SBRT to provide far superior local control and overall survival when compared to conventional radiation therapy in the treatment of clinically inoperable stage I NSCLC, establishing SBRT as the standard of care in these patients (1, 6–10). The 2-year overall survival (68%) and 2-year local control (87%) in this study are similar to clinical trials and studies at larger academic institutions. Table 3 summarizes the results of a number of previous SBRT studies at large academic institutions and clinical trials. 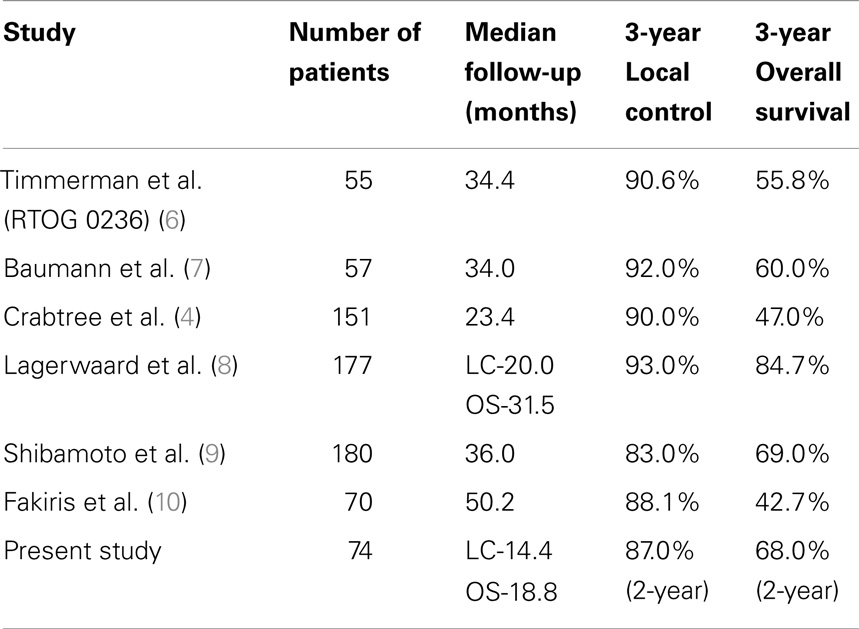 There are only a limited number of studies using CyberKnife in the treatment of stage I NSCLC. CyberKnife therapy appears to have similar success for local control and overall survival to other tools for delivering SBRT. The local control with CyberKnife therapy is reported from 85.8 to 100% and the overall survival is reported from 45 to 87% (12–16). A number of previous CyberKnife studies are included in Table 4. The study by Vahdat et al. included in Table 4 only included patients with stage IA NSCLC. 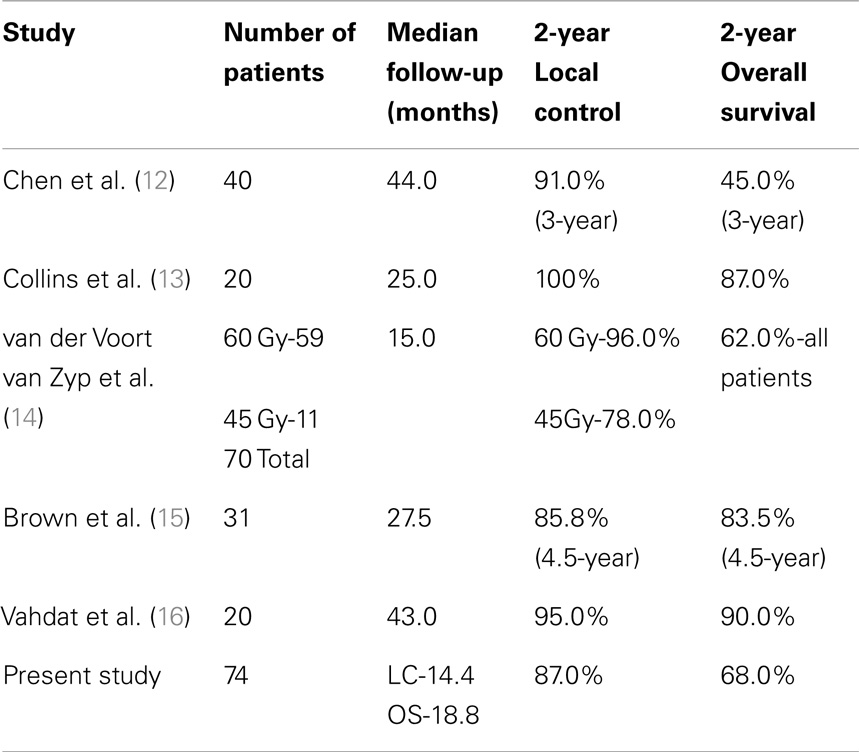 Similarly, in a multicenter study involving 180 stage I NSCLC patients, Shibamoto et al. found women to have an overall survival of 86% and men to have an overall survival of 67% (p = 0.031) (9). This study also found women as well as younger patients to have more favorable local recurrence rates. The p-value was 0.027 for women and 0.014 for age ≤76.

This study is limited by its relatively small sample size, short follow-up period, and retrospective design. As in the case of BED10Gy, it is possible that some of the variables may have achieved statistical significance with a larger sample size.

In conclusion, our study at a small academic hospital demonstrates effective local control and overall survival of patients with stage I NSCLC treated with SBRT. These results are encouraging for the use of CyberKnife SBRT in the treatment of stage I NSCLC outside of major academic institutions.

Dr. Jonathan A. Haas has received speaker’s honoraria from Accuray, Inc., Sunnyvale, CA, USA. The other co-authors declare that the research was conducted in the absence of any commercial or financial relationships that could be construed as a potential conflict of interest.

Copyright: © 2014 Factor, Vu, Schneider, Witten, Schubach, Gittleman, Catell and Haas. This is an open-access article distributed under the terms of the Creative Commons Attribution License (CC BY). The use, distribution or reproduction in other forums is permitted, provided the original author(s) or licensor are credited and that the original publication in this journal is cited, in accordance with accepted academic practice. No use, distribution or reproduction is permitted which does not comply with these terms.