Ubiquitin is a small regulatory protein that was discovered in 1975 by Goldstein (1). It has been found in almost all eukaryotic cells. It consists of 76 amino acids and is encoded by four different genes in the human genome: UBB, UBC, UBA52, and RPS27A. Critical cellular processes are regulated, in part, by maintaining the appropriate intracellular levels of proteins through a balance between protein synthesis and degradation. The ubiquitin–proteasome pathway is a major pathway for the targeted degradation of proteins. This pathway involves multi-step enzymatic reactions catalyzed by a cascade of enzymes that include: ubiquitin-activating enzyme E1, ubiquitin-conjugating enzyme E2, and ubiquitin ligase E3 (2). In fact, data shows that ubiquitin plays a vital role in protein degradation and in many other cellular functions such as: cell growth, cell cycle regulation, immune system functionality, and DNA repair processes (3). In addition, it is engaged in the regulation of turnover as well as the activity of many target proteins involved in cell proliferation, differentiation, and cell death (4). Therefore, any disruption in its pathway is linked to several diseases including: neurodegenerative diseases, genetic disorders, cancers, and other immunological disorders.

P62 is an ubiquitin binding protein which induces activation of multiple upstream signaling pathways, including those triggered by epidermal growth factor (EGF) receptors. In several studies, immunohistochemical staining of p62 has been shown in different parts of the gastrointestinal tract (stomach, esophagus, large intestine) including cancers (5, 6). Its expression has been associated with cell differentiation and tumor metastasis in different types of malignant tumors (such as breast cancer) (7). Many trials suggest that this expression of p62 in tissues, and the appearance of autoantibody to p62, might be related to manifestations of malignancy (6). The accumulation of p62 is reported to be associated with a higher risk of distant metastases, poorer prognosis (particularly in breast cancer), and to be predictive of response to clinical treatments (5).

Moreover, regulation of ubiquitin is involved in tumor progression and oncogenesis. Its overexpression in human cancers correlates with chemoresistance and poor clinical prognosis (2). This critical role of ubiquitin in protein turnover in cell cycle regulation makes this process a target for oncogenic mutations and codes for several oncogenes in different malignancies (8, 9) such as colonic and renal cell carcinoma.

In gastrointestinal (GI) carcinomas, there are few studies of the expression of P62/ubiquitin. It has been shown that ubiquitin expression in pancreatic adenocarcinoma significantly correlates with clinical stage, degree of histologic differentiation, lymph node metastasis, and poor overall survival (10). However, there are little data about the role of both p62 and ubiquitin in gastric and colorectal carcinogenesis, prognosis, and aspects of its inhibition for therapeutic purposes.

In this study, in order to understand the roles p62/ubiquitin play in gastrointestinal carcinomas of gastric, colorectal, and pancreatic origin, we carried out immunohistochemical analyses of p62/ubiquitin expression in a cohort of patients with annotated clinicopathologic data. Expression of both markers was correlated with clinicopathologic parameters and survival.

The study group was composed of 61 gastric, 45 colon, and 18 pancreatic adenocarcinomas from patients diagnosed at Emory University Hospital between 2000 and 2013 with tissue available in tissue microarrays (TMAs). TMAs were constructed using two 1.0 mm tissue cores from each neoplasm, and included non-neoplastic tissues. Permission to use the TMAs and to review pathology reports and patient charts was obtained from the Institutional Review Board of Emory University.

Five micron sections of the formalin-fixed, paraffin-embedded TMAs were tested for the presence of p62 using mouse monoclonal antibody (SQSTM1) (Abcam, Cambridge, MA, USA) (dilution 1/3200); and ubiquitin using rabbit antihuman polyclonal antibody (Dako Corp., Carpintaria, CA, USA) (dilution 1/800). Sections were deparaffinized in xylene and grades of alcohol, then rehydrated in water. Antigen retrieval was performed in citrate buffer (pH 6.0) using an electric pressure cooker for 3 min at 12–15 pounds per square inch (120°C), and cooled for 10 min prior to immunostaining. All slides were loaded on an automated system (Dako Autostainer) and exposed to 3% H2O2 for 5 min. Tissues were then exposed to primary antibody for 30 min. Envision plus (Dako) detection system was used, with labeled polymer-horseradish peroxidase for 30 min, diaminobenzidine as chromogen for 5 min, and DAKO automation hematoxylin as counterstain for 15 min.

P62 and ubiquitin expression was nuclear and cytoplasmic. Intensity was categorized as negative (0), low (1), moderate (2), and high (3). A staining area of >20% of tumor cells was used as a cutoff for positivity. The Q-Score, generated by multiplying the staining intensity by the percent of tumor cell positivity, was divided into negative (0), low (<100), moderate (100–200), and high (200–300). Normal gastric, colon, and pancreatic tissues were included as negative controls.

After categorizing the subjects into positive and negative groups based on the 20% cutoff of staining area, the staging of these three types of cancer was classified into early (stage 0–3A) and advanced stage (equal or more than stage 3B). The overall survival time of all the three types of cancer were not normally distributed and were log-transformed for the following analyses. Chi-square or Fisher’s exact test was used for assessing the comparability of cancer staging (pathologic stage, tumor size, lymph node metastases, and distant metastases) between positive and negative groups. A two-sample t-test was used to evaluate the association between log-transformed survival time and the positivity of tumor cells. All the statistical analyses were conducted using SAS statistical software version 9.3 (SAS Institute Inc., Cary, NC, USA), and P < 0.05 was considered statistically significant.

Of 124 cases, there were 61 gastric, 45 colorectal, and 18 pancreatic carcinoma. Tables 1–3 show the immunohistochemistry profile for P62 and ubiquitin respectively in the above carcinomas (Figures 1–4). 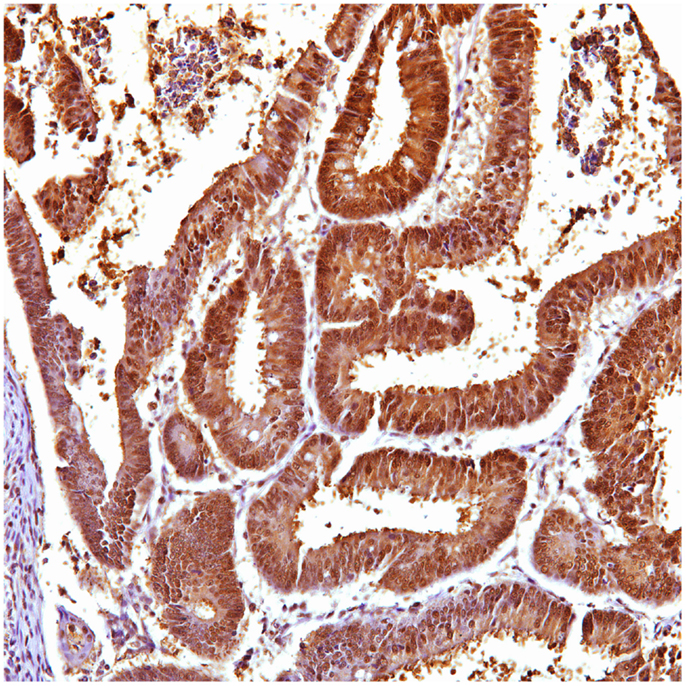 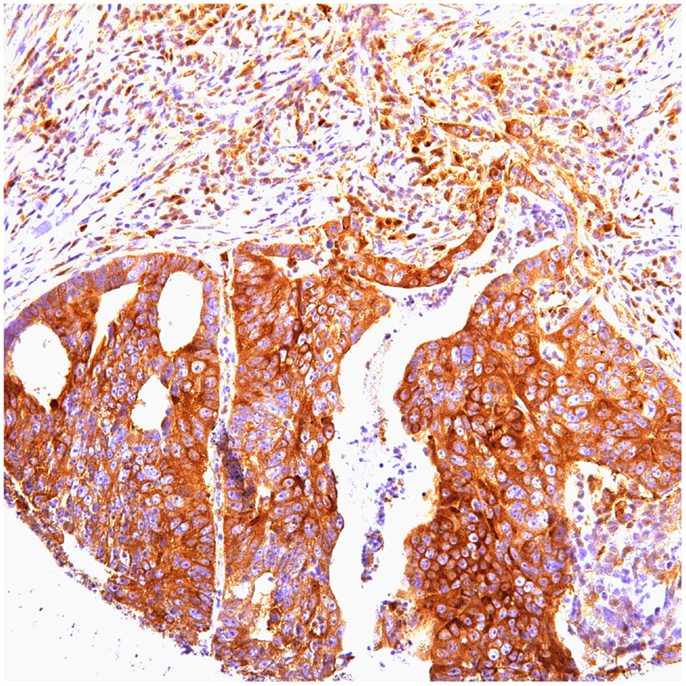 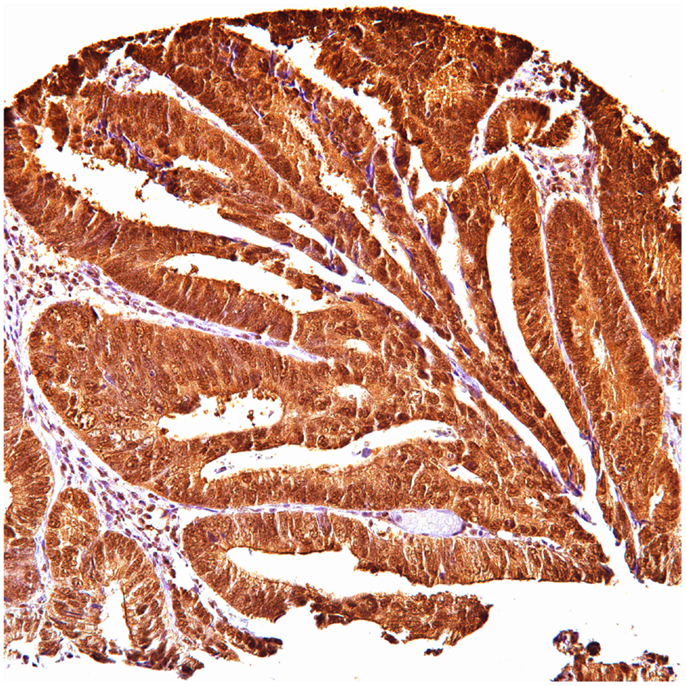 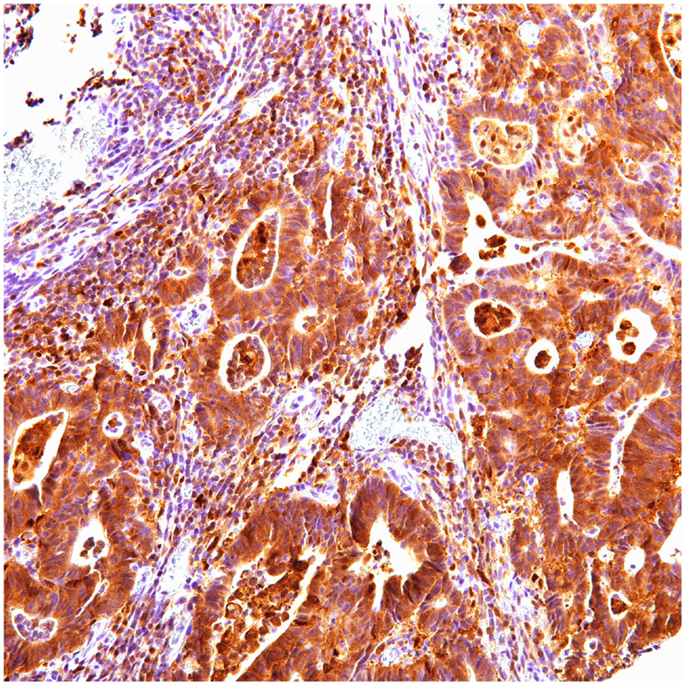 Normal non-neoplastic gastric (6), colon (4), and pancreatic (4) tissues were negative for both P62 and ubiquitin, nuclear, and cytoplasmic staining (0–1 intensity, <20%).

It has been described before that carcinogenesis is a multi-step process involving many complex factors (11). Furthermore, genetic mutation in oncogenes, tumor-suppressor genes, and other tumorigenic factors play an important role in this process. Recently, there has been growing evidence that a number of intracellular proteins and auto-antibodies are associated with increased risk of cancer (12). P62 and ubiquitin are considered autoantibodies that are found in many malignant tumors (6). Previous studies have demonstrated accumulation of p62/Ubiquitin as cytoplasmic autoantigens in sera from patients with different types of cancers (13). Their expression has been reported in the carcinogenesis process (14). Although reported in some cancers such as hepatocellular carcinoma, information regarding their expression in other GI tumors is not studied well. Even now, the association of these regulatory proteins with the behavior of GI carcinomas is still not fully understood.

In the current study, the diversity of p62/Ubiquitin expression was characterized in patients with different digestive system cancers. Our data show that p62/ubiquitin are highly expressed in these GI cancers, and may indicate their role in increased cellular proliferation and promotion of tumorigenesis. However, it is becoming apparent that p62/ubiquitin influences various cellular processes including cell growth, survival and mitosis; their role in promoting carcinogenesis is still a gray area. They exhibit an oncofetal behavior with increased cellular proliferation and malignant transformation (15). Both p62/ubiquitin have a posttranscriptional role modulating the stability and function of certain important mRNAs. They have emerged as crucial molecules in regulation of autophagy, and as modulators of mitotic transit and genomic stability allowing tumor cells to survive under conditions of autophagy defects. In addition, recent studies demonstrated an unanticipated role for p62 in activation of the mammalian target of rapamycin (mTOR) pathway; which is a central regulator of cell growth and autophagy, and is aberrantly activated in many types of cancer such as hepatocellular carcinoma (14, 16). Also, p62 accumulation has been directly correlated with higher risk of distant metastasis in triple negative breast carcinoma patients (5).

Our results confirm the recent growing evidence that a number of intracellular proteins with RNA-binding motifs have been identified in human cancers. High ubiquitin expression is associated with increased frequency of lymph node metastases in both colon and pancreatic adenocarcinomas, and has an impact on overall survival in patients with pancreatic adenocarcinoma being associated with worse overall survival (1.37 vs 2.26 mos, P = 0.04).

High p62 expression is associated with poorly differentiation but less lymph node metastases in gastric carcinoma. Our study results do not show correlation between P62 and ubiquitin expression and other clinicopathologic parameters in gastric, colon, and pancreatic adenocarcinomas. In previous studies, p62/ubiquitin overexpression has been associated with increased incidence of recurrence after treatment, and decreased overall survival (2, 5). Our data show that both markers may represent potentially promising therapeutic targets.

In summary, in our current study we extended immunohistochemical analysis from hepatic to other gastrointestinal carcinomas. There was significant expression of p62/ubiquitin in gastric, pancreatic, and colonic carcinomas. In addition, ubiquitin expression seems to have an impact on frequency of lymph node metastases in colon and pancreatic carcinomas and overall survival in patients with pancreatic adenocarcinoma.

Copyright: © 2015 Mohamed, Ayman, Deniece, Wang, Kovach, Siddiqui and Cohen. This is an open-access article distributed under the terms of the Creative Commons Attribution License (CC BY). The use, distribution or reproduction in other forums is permitted, provided the original author(s) or licensor are credited and that the original publication in this journal is cited, in accordance with accepted academic practice. No use, distribution or reproduction is permitted which does not comply with these terms.