Background: Although the median age at diagnosis of non-small cell lung cancer (NSCLC) is 70 years, a subset of patients with NSCLC present at a younger age (<40 years). Little is known about the time-trends in incidence of NSCLC in the young, their characteristics and outcomes.

Results: Young patients represented 0.6% of incident NSCLC from 1978 to 2010. The incidence of young NSCLC declined significantly during this time-period. Young NSCLCs had a higher proportion of women (51%), Asians or Pacific Islanders (14%), adenocarcinoma histology (59%) and were more likely to present with distant metastases (68%). The young had better all cause and lung cancer-specific survival than the older patients (median survival for localized, regional, and distant disease: not reached, 28, 9 vs. 46, 17, 5 months; p < 0.001 for all groups). Male sex, non-adenocarcinoma histology, and main bronchial primary were independent negative prognostic factors among the young. In contrast to the overall population, black race was a poor prognostic factor among the young.

Lung cancer is the most common cause of cancer-related death in the United States and worldwide (1, 2). Despite recent advances in treatment, prognosis of patients with lung cancer remains poor, with 5-year overall survival of approximately 15% (3). Non-small cell lung cancer (NSCLC), which accounts for over 85% of all lung cancer, is often considered a disease of the older population with a median age at diagnosis of about 70 years (3).

However, a significant proportion of new NSCLC patients, ranging between 1 and 10%, are younger than 40 years (4–9). There are several issues, which are particularly relevant to NSCLC in these patients, for example, their distinctive cancer biology, treatment tolerance, adherence, effectiveness, fertility preservation, and early death (10). Despite being an important demographic subgroup, there are limited data on the incidence, time-trends, and clinical characteristics of young patients with lung cancer.

Although there are substantial variability in the age ranges used in past studies, available data suggest that patients younger than 40 have a higher incidence of adenocarcinoma and greater representation of females (5, 7, 11–24). Reports comparing stage at presentation and outcomes of NSCLC in the young to older patients have yielded discordant results (11, 12, 14–16, 18, 20–22, 24).

Only two large population-based studies have studied lung cancer in the young using the surveillance, epidemiology, and end results (SEER) (5, 6). Since the recent report, there have been significant advances in the screening, diagnosis, and management of NSCLC. Additional registries have been included in SEER and the introduction of the normalized localized/regional/distant staging system have made comparison across a longer period more accurate compared with the American Joint Committee on Cancer staging used in prior studies. Furthermore, the population younger than 40 in itself is heterogeneous and previous studies have not explored clinicopathological features and outcomes among the different age groups constituting this larger group. In this study, using the normalized localized/regional/distant staging system, we analyzed the SEER database for NSCLC patients from 1998 to 2010 and evaluated characteristics of patients younger than 40. Using the data from 1975 to 2010, we also describe time-trends in the incidence of NSCLC in this population.

For analysis on the incidence and its trend, we used data from all nine registries covering 1975–2010. The estimated incidence rates were adjusted for patient age. Percentage change, annual percentage change were reported using SEERT STAT based on the method described previously (25) with modification for confidence intervals (CIs). Percentage change was calculated using data collected at 1-year intervals. APC was calculated using weighted least squares. Comparison of the incidence observed from two periods of 1975–1982 and 1983–2010 were reported.

Time-Trends in Incidence of NSCLC in the Young

Characteristics of NSCLC in the Young

Table 1 shows the characteristics of NSCLC in patients younger than 40 compared with older patients. NSCLC still overwhelmingly remains a disease of older individuals: 99.4% of incident NSCLC in the United States between 1998 and 2010 were in patients older than 40. However, the male-predominant distribution of NSCLC in adults was compromised in the young among whom women had a statistically non-significantly higher incidence of NSCLC than men (51 vs. 49%; p = 0.14). Asians or Pacific Islanders accounted for 14% of young NSCLC whereas they accounted for only 5% among the older population. Although less marked, the frequency of Blacks was higher among those younger than 40 (15 vs. 11%). Adenocarcinoma and squamous cell lung cancer were the most common histologies among the young. The young had a higher frequency of adenocarcinoma (59 vs. 42%) and lower frequency of squamous lung cancers (10 vs. 24%) than the older population. Distant metastases at diagnosis were more common among the young (68 vs. 52%). Upper lobe cancers, which are thought to be associated with cigarette smoking, were less common among the young (44 vs. 50%). Thus, significant differences in frequency were observed in the young compared with older patients in terms of gender, race, histology, distant metastasis, and primary site of NSCLC. 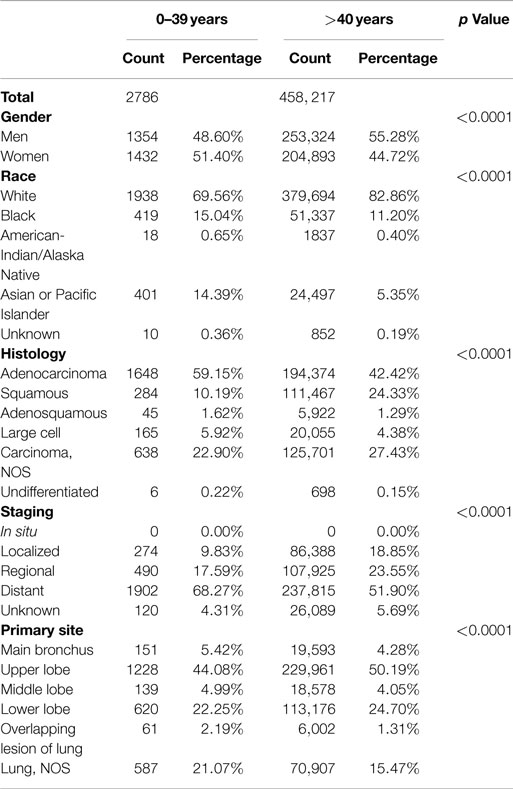 Table 1. Characteristics of NSCLC patients diagnosed between 1998 and 2010 by age group.

Although age by itself is not a major determinant of treatment for NSCLC, co-morbidities may limit the ability to deliver therapy. SEER does not provide sufficient data to estimate all treatment, but has information on cancer-directed surgeries. For all stages, the young were significantly more likely to undergo surgery than older patients (p = 0.0054 to <0.0001) (data not shown).

To better understand the clinicopathological characteristics of the young, we assessed them in 5-year age increments starting from age 15 (Table 2). Although individual age subgroups had limited number of patients, the results show significant differences in race, histology, stage at diagnosis, and primary site of involvement between the individual age groups. 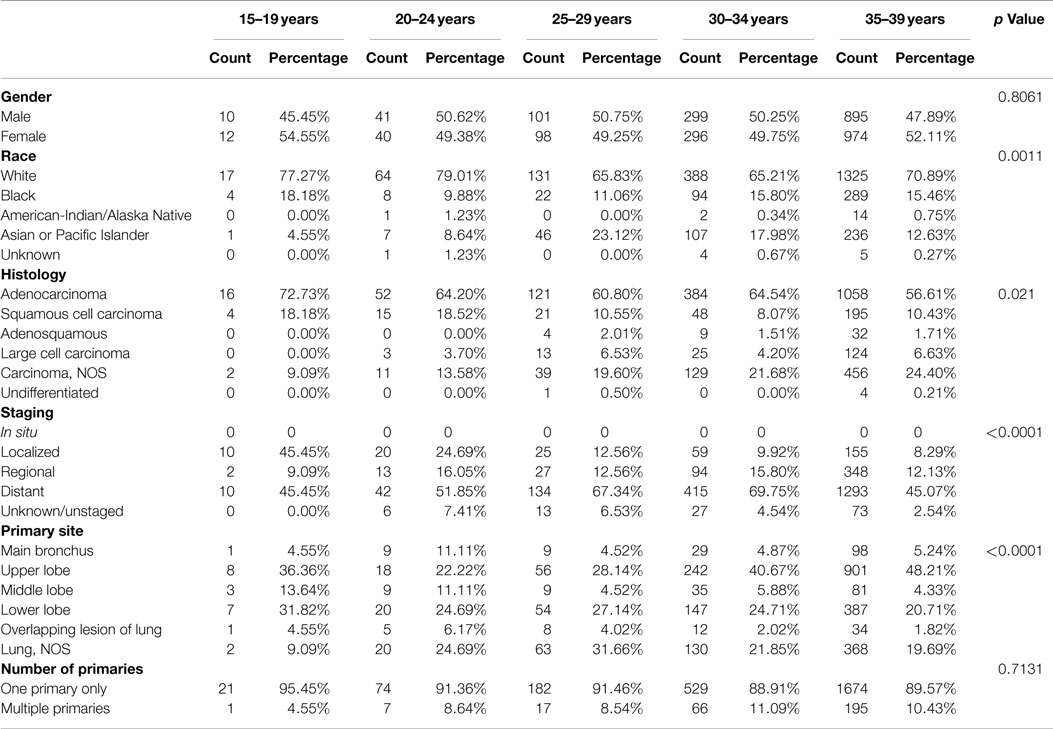 Outcomes of NSCLC in the Young 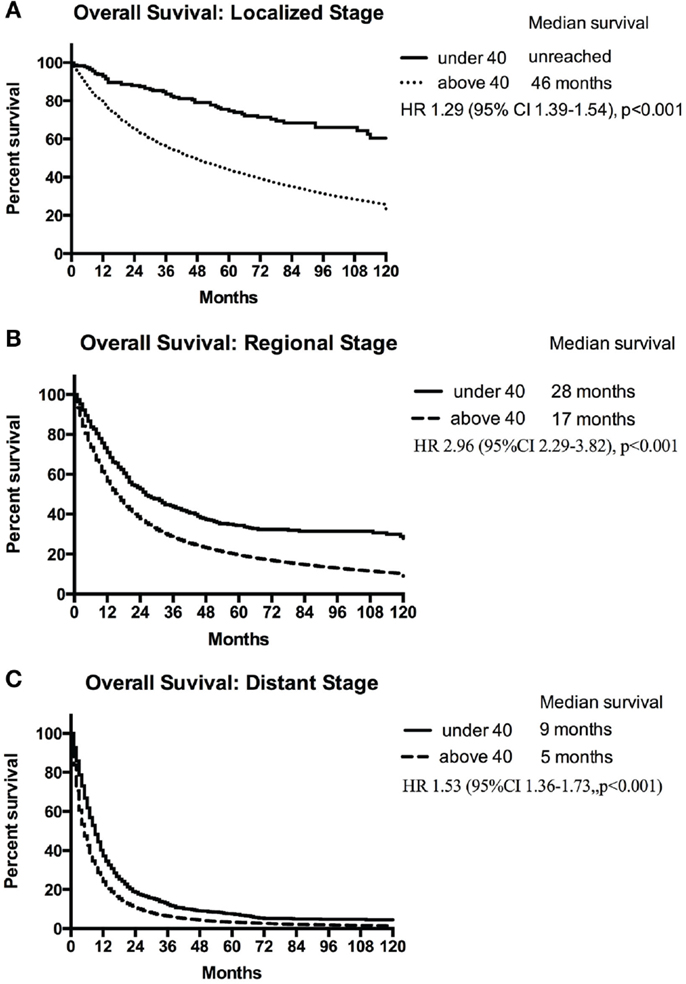 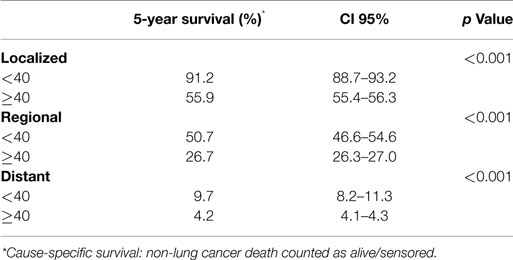 Table 3. Lung cancer specific survival for patients under and over 40.

Table 4. Multivariate analysis to examine potential factors associated with survival in the young.

Young patients represented 0.6% of incident NSCLC from 1978 to 2010. The incidence of young NSCLC declined significantly during this time. Young NSCLCs had a higher proportion of women, Asians or Pacific Islanders, adenocarcinoma histology and were more likely to present with distant metastases at diagnosis than the older population. The young were less likely to have upper lobe cancers.

Although for purposes of observational studies, patients younger than 40 are grouped into one category, we found that this group in itself was heterogeneous in terms of clinical and pathological characteristics. Within the young population, significant differences were observed in the frequency of race, histology, stage at diagnosis, and primary site of involvement. Using the standardized localized/regional/distant staging system, stage-for-stage, the young had better all cause and lung cancer-specific survival than the older population. Multivariate Cox model analyses identified male sex, non-adenocarcinoma histology, and main bronchial primary as independent negative prognostic factors among the young. Additionally, in contrast to the overall population, black race was a poor prognostic factor among the young.

Our results extend upon those from prior population-based registry studies, which showed a higher proportion of women, adenocarcinoma, and metastatic disease in the young (5, 6). As in our study, both prior studies found somewhat modest increases in the overall magnitude of risk of death. In addition to the previous studies, we show a decrease in the incidence of NSCLC from 1975 to 2010 and demonstrate significant differences in age-based subgroups among those younger than 40.

Cancer rates in the young are thought to be a useful indicator to assess the impact of recent cancer control efforts. Using population-based registries with state-specific data, Jemal et al. have demonstrated that lung cancer death rates in young adults aged between 30 and 39 years correlated strongly and inversely with the individual state tobacco control efforts (26). The observed decline in the NSCLC death rates among the young in our study could therefore be attributed in part to the past anti-smoking interventions (27).

Our finding of a comparable incidence of NSCLC among males and females in the young indicates the effect of factors other than cigarette smoking. This is in contrast to older population wherein smoking is the major risk factor for lung cancer. In them, the convergence of relative risks of NSCLC for men and women have been attributable to the convergence of smoking patterns among men and women since 1960s and the aging of birth cohorts with the heaviest lifetime history of smoking (28). Despite a probable early start of smoking in young adults with lung cancer, the development of the disease cannot be fully explained due to smoking alone. Several studies have indicated higher genetic susceptibility among younger patients (29–31), as well as influence of occupational risk factors (32). There are limited data on the genetic basis of lung cancer susceptibility (33). Recent studies have reported that germline mutations in EGFR and HER2 genes can predispose the development of lung cancer (34, 35).

We were unable to clarify the incidence of smoking in the young NSCLC since smoking status is not captured in the SEER database. Nevertheless, a growing body of literature suggests that NSCLC in never-smokers has several distinct clinical, pathological, and molecular characteristics implying that it might be a different disease compared with NSCLC in smokers (36); adenocarcinoma is the most frequent histology in never-smokers and alterations in driver oncogenes such as EGFR, and ALK are more common in tumors from never-smokers compared to smokers.

Although based on a relatively small number of patients, our findings indicate that black race was a poor prognostic factor among the young. Whether this disparity is related to genetic differences in the tumor, pharmacogenomics, or differential access to care will need additional study. Previous studies have suggested that patients with upper lobe tumors tend to have had more exposure to tobacco. In our study, upper lobe cancers were less common among the young, further supporting the notion that genetic susceptibility and other environmental factors may be important risk factors in the pathogenesis of NSCLC in the young (37).

This study provides the most comprehensive analyses to date of a large registry dataset of young NSCLC. We observed significant differences in clinical presentation even among those younger than 40. Further studies are needed to understand the interaction between genetic susceptibility and environmental carcinogens including tobacco in the pathogenesis of NSCLC in the young.

This research was supported by the Intramural Research Program of the National Institutes of Health.

Copyright: © 2015 Thomas, Chen, Yu, Jakopovic and Giaccone. This is an open-access article distributed under the terms of the Creative Commons Attribution License (CC BY). The use, distribution or reproduction in other forums is permitted, provided the original author(s) or licensor are credited and that the original publication in this journal is cited, in accordance with accepted academic practice. No use, distribution or reproduction is permitted which does not comply with these terms.

†Anish Thomas and Yuanbin Chen have contributed equally to this work.