Endemic fluorosis is a worldwide environmental problem due to excessive fluoride, commonly due to increased drinking water fluoride levels but sometimes due to other sources such as food with high fluoride content. In India, 21 of the 35 states are known to have health problems associated with fluoride toxicity. The present report is a case of a 50-year-old female who was seen with progressive spinal complications and a MRI of the spine suggestive of multiple myeloma. The MRI of the lumbosacral spine showed a diffuse and heterogeneous marrow signal of the lower dorsal and lumbosacral vertebrae. The MRI was also suggestive of coarse trabeculation and appeared predominantly hypointense on the T1W image and had mixed signal intensity on the T2W image. These findings were suggestive of neoplastic bone marrow infiltration and the presence of a proliferative disorder, with multiple myeloma being the most likely. During the patient workup, it was found that other family members were also having similar complications and, after investigation of these family members, it was found that they are suffering from systemic fluorosis. The patient was then evaluated for skeletal fluorosis, and this condition was found to be present. Multiple myeloma was ruled out by the finding of a negative serum protein electrophoresis. The spinal complications appeared to be mainly due to the compression of the spinal cord and nerve roots by protruding osteophytes, thickening of the posterior longitudinal ligament, and thickening of the ligamentum flavum resulting in a compressive myeloradiculopathy and compressive myelopathy. The finding of multiple myeloma-like findings on the spinal MRI in association with skeletal fluorosis was considered to be a very rare event. This case report underlines the need to consider the presence of spinal skeletal fluorosis when evaluating spinal complications with unusual pseudo-multiple myeloma-like changes on the spinal MRI.

Endemic skeletal fluorosis is widely prevalent in India, China, and in many other countries around the world (1). The primary findings of fluorosis are mottling of teeth, osteosclerosis, soft tissue calcification, and marginal bony overgrowth (2). Symptoms range from mild motor and sensory loss to spastic paraplegia and spastic quadriplegia with bladder and bowel incontinence. Association of fluoride toxicity with dysfunction of bone, and endocrine, gastrointestinal, and reproductive systems have been previously reported (3–5). Effects of fluoride on corticosteroids metabolism and its role in bone mineralization have also been reported by Das et al. In this case report, we are reporting very rare multiple myeloma-like MRI findings in a skeletal fluorosis patient.

We are presenting a case report of a 50-year-old female from a village of Agra, in the state of Uttar Pradesh, an endemic fluorosis region in India. Patients belong to lower socioeconomic strata, and the source of income is agriculture. Patient was referred from district hospital to the supper specialty cancer hospital for the treatment of multiple myeloma, on the basis of radiological (MRI spine) findings. Patients represented with hemogram values as: hemoglobin 9.0 g/dl (12.0–15.0), RBC 3.61 × 106/μl (4.0–4.9), HCT-28.2% (36–44), MCV-78.1fL (80–100), MCH-24.9 g/dl (26–34), RDW-18.7% (<14.5), and platelets count was normal (268 × 103/μl), while ESR 40 mm (normal value for women over 50 years old: <30 mm/h) was significantly raised after 1 h, alkaline phosphatase was increased to 733 IU/l (33–131 IU/l). Lymphoma was ruled out, because lymphoma patients usually present with symptoms such as lymphadenopathy, night sweats, weight loss, dyspnea, itching, etc. All these symptoms were absent in the patient accept mild to moderate weight loss. The chances of renal osteodystrophy were negligible because osteodystrophy is a bone disease that occurs when patient’s kidneys fail to maintain proper levels of calcium and phosphorus in the blood. The blood calcium level in the subject was 9.1 mg/dl (normal range 8.1–10.4 mg/dl), renal osteodystrophy was ruled out. Because the serum level of PTH was in normal 49.06 pg/ml (normal range 15–65 pg/ml), hyperparathyroidism was least likely.

The patient was advised for MRI spine to diagnose the cause of severe spinal pain and stiffness. MRI of the lumbosacral spine showed a diffusely and heterogeneous marrow signal of visualized lower dorsal and lumbosacral vertebrae, their posterior elements as well as pelvic bones. MRI was also suggestive of coarse trabeculation and appears predominantly hypointense on T1W and mixed signal intensity on T2W image. These findings were suggestive of neoplastic bone marrow infiltrative and proliferative disorders and are more in favor of multiple myeloma rather than metastasis and other disease (Figures 1A,B). The MRI findings such as appearance of normal ligamentum flavum with no hypertrophy and normal appearance of pre- and paraspinal soft tissue were not suggestive of skeletal fluorosis also. 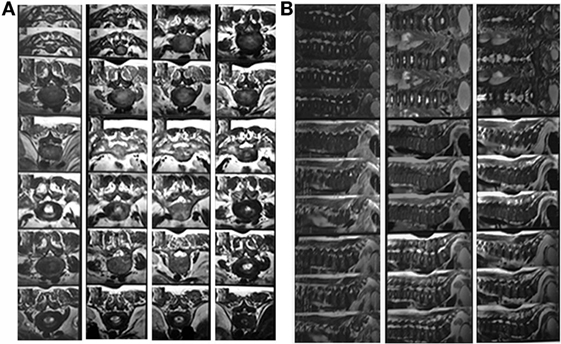 The Sequence of MRI Findings of Lumbosacral Spine 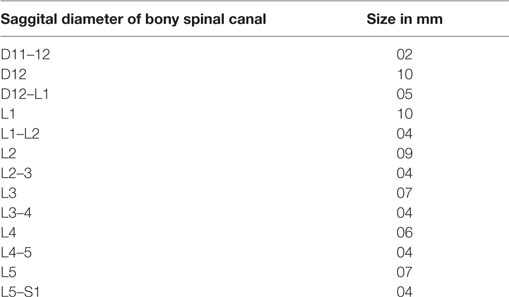 Diffusely altered and heterogeneous marrow signals of visualized lower dorsal and lumbosacral vertebrae, their posterior elements as well as pelvic bones were observed. This show coarse trabeculation and appears predominantly hypointense on T1W and mixed signal intensity on T2W images. These are suggestive of neoplastic marrow infiltrative/proliferative disorders and are more in favor of multiple myeloma rather than metastasis. Clinicopathological and biochemical correlations were advised.

Diagnosis and Confirmation of Skeletal Fluorosis

Suspicion about the systemic fluorosis started during the patient workup when the patient reported that the other family members also suffered from the same kind of complications. After evaluation of family members, we found that they were having clear sign of dental fluorosis in children and skeletal fluorosis in adults and were symptomatic for fluorosis, which includes progressive pain and stiffness of neck, spine and limb joints, muscular weakness, lethargy, and gastrointestinal problems. After radiological and laboratory investigations, family members of the patients were diagnosed and confirmed for fluorosis. As per the family history, it was suspected that the radiological findings of multiple myeloma in the patients may be an unusual manifestation of chronic fluoride toxicity. To confirm the hypothesis, patient’s urinary and serum fluoride concentration were measured by using selective fluoride ion electrode (Orion, Thermo Scientific), and it was found that fluoride level in urine and serum were significantly increased. To further confirm the chronic fluoride toxicity, forearm interosseous membrane calcification was evaluated by X-ray and was positive for the same (Figure 2A), and X-ray hip was also suggestive of increased bone density (Figure 2B). DXA scan (bone densitometry) showed that the bone density increased manyfold, which is also suggestive of skeletal fluorosis (Figures 3A,B). 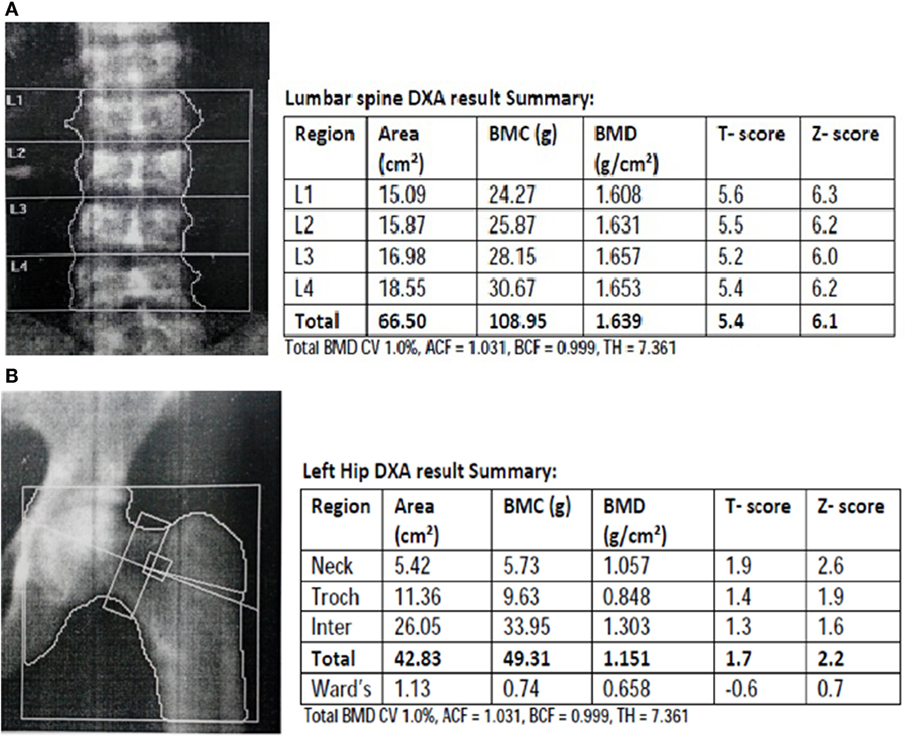 Figure 3. DXA (bone densitometry) and result summary, (A) spine, (B) hip both showing many fold increase in bone density.

Table 1. Fluoride levels in the serum, urine, and drinking water of the patient.

Fluorosis in humans predominantly has dental and skeletal manifestation. In the early stage of chronic fluoride toxicity, patients are asymptomatic or gastrointestinal symptoms may be present. In the advanced stages, skeletal fluorosis causes crippling deformities and neurological complications. Neurological complications occur in 5–10% of cases of skeletal fluorosis (6). These features usually develop after exposure to a high fluoride content for longer period of time (7). Spinal cord involvement occurs in the cervical region followed by thoracic and lumbar region (8). These complications appear mainly due to the compression of the spinal cord and nerve roots by the protruding osteophytes, thickening of the posterior longitudinal ligament, and thickening of the ligamentum flavum resulting in compressive myeloradiculopathy and compressive myelopathy (9, 10), but multiple myeloma-like findings are very rare events and from the best of our knowledge, we are reporting this finding the first time. In fluorosis, the compressive myelopathy has been observed to occur at different levels, but MRI findings suggesting multiple myeloma-like changes was a very unusual finding in fluorosis patient whom we have observed. Though the fluorosis was confirmed by the lab test and by other investigations such as high level of fluoride in body fluid, forearm interosseous membrane ossification/calcification, and increased bone density. M-band in serum and urine was negative, thereby ruling out MRI findings of multiple myeloma and suggesting that fluoride toxicity could probably be bringing out pseudo-multiple myeloma-like changes in the lumbosacral spine. These abovementioned MRI findings with systemic fluorosis are very rare events. Bone marrow aspiration and spinal marrow biopsy are invasive technique and cannot be advised routinely to rule out these types of pseudo-multiple myeloma-like MRI findings in spinal fluorosis. In such type of fluorosis patients if MRI spine is suggestive of multiple myeloma, the spinal biopsy will rule out multiple myeloma but will not suggest fluorosis and yet it is difficult to diagnose. Therefore, this case report will provide a dimension to think about rare spinal fluorosis that may show unusual multiple myeloma-like findings in spinal MRI.

Copyright: © 2016 Quadri, Alam, Sarwar, Ghanai, Shariff and Das. This is an open-access article distributed under the terms of the Creative Commons Attribution License (CC BY). The use, distribution or reproduction in other forums is permitted, provided the original author(s) or licensor are credited and that the original publication in this journal is cited, in accordance with accepted academic practice. No use, distribution or reproduction is permitted which does not comply with these terms.