Purpose: No direct comparisons between extreme hypofractionation and conventional fractionation have been reported in randomized trials for the treatment of localized prostate cancer. The goal of this study is to use a propensity score matched (PSM) analysis with the National Cancer Database (NCDB) for the comparison of stereotactic body radiation therapy (SBRT) and intensity modulated radiation therapy (IMRT) for organ confined prostate cancer.

Methods: Men with localized prostate cancer treated with radiation dose ≥72 Gy for IMRT and ≥35 Gy for SBRT to the prostate only were abstracted from the NCDB. Men treated with previous surgery, brachytherapy, or proton therapy were excluded. Matching was performed to eliminate confounding variables via PSM. Simple 1–1 nearest neighbor matching resulted in a matched sample of 5,430 (2,715 in each group). Subset analyses of men with prostate-specific antigen (PSA) > 10, GS = 7, and GS > 7 yielded matched samples of 1,020, 2,194, and 247, respectively.

Intensity modulated radiation therapy (IMRT) is a standard radiation modality used in the treatment of organ confined prostate cancer. Ten-year actuarial data (median follow-up of 8 years) is available for high-dose IMRT up to 81 Gy which demonstrates high efficacy in preventing biochemical failure with acceptable side effects (1). Stereotactic body radiation therapy (SBRT) has been accepted as an “appropriate alternative for select patients with low to intermediate-risk disease” as per the ASTRO policy update of April 2013 and is also supported by the National Comprehensive Cancer Network (NCCN). SBRT publications have validated freedom from biochemical failure (FFBF) with up to 9-year actuarial data (median follow-up of 7 years) and side effect rates comparable with IMRT (2–4).

The NCDB is jointly sponsored by the American College of Surgeons and the American Cancer Society. It is a clinical oncology database sourced from hospital registry data collected in more than 1,500 commission on cancer-accredited facilities. NCDB data are used to analyze and track patients with malignant neoplastic diseases, their treatments, and outcomes. Data represent approximately 70% of newly diagnosed cancer cases nationwide and 30 million historical records. The NCDB includes prostate cancer patients treated from 2004 to 2013 providing information on demographics, risk factors specific to prostate cancer, staging information, treatment, and survival data. Patients are de-identified and the database is then sent to individual researchers for analysis after application and acceptance for individual projects. 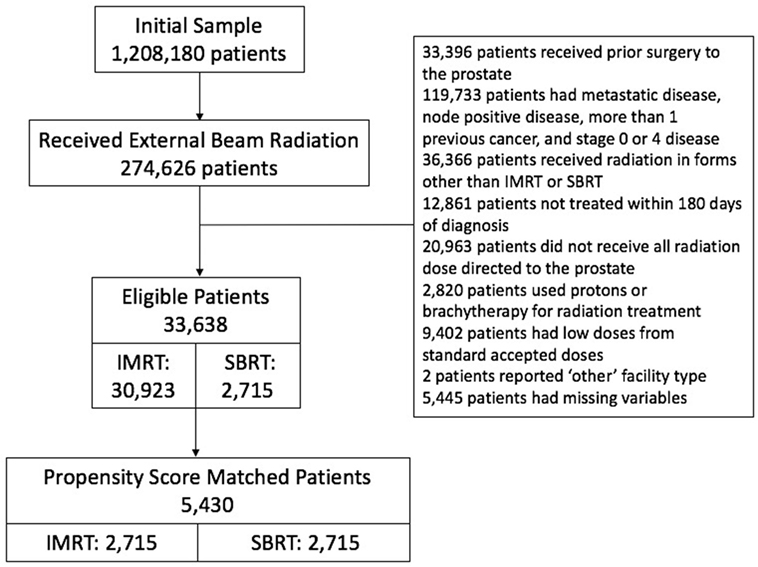 This study was approved and carried out in accordance with the recommendations of the NCDB which provided a de-identified file for investigator use. The NCDB is not responsible for the analytical methodology or conclusions of the investigator.

Simple 1–1 nearest neighbor matching resulted in a matched sample of 5,430 with 2,715 in each group. Since these groups were well matched on the basis of ASMDs below 0.2, comparisons between treatment groups (IMRT, SBRT) could be made using a Kaplan–Meier curve, and a log-rank test statistic (Figure 2). The p-value corresponding to the log-rank test was above 0.05 (p = 0.6483), indicating that no significant differences between treatment groups were observed after matching. 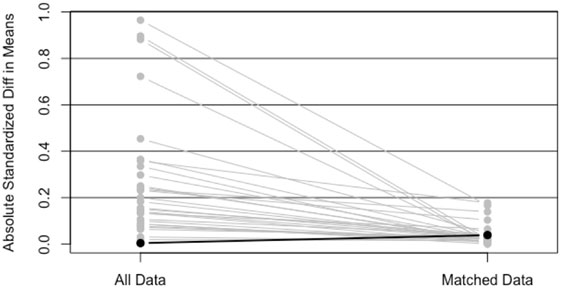 A total of 5,430 men were included in the analysis after applying inclusion criteria, exclusion criteria, and performing PSM. There were 2,715 patients (50%) treated with SBRT and 2,715 patients (50%) treated with IMRT. Survival was evaluable through 8 years on the basis of an adequate number of patients at risk. Patient and treatment characteristics by treatment group are provided in Table 1.

Figure 3 provides Kaplan–Meier OS estimates by treatment group. No statistically significant overall differences are observed (p = 0.6483), and the estimated OS at 8 years for IMRT and SBRT patients was 77.23 and 79.38%, respectively. The estimated OS at 8 years for other patient variables, both within the matched and pre-matched groups, are provided in Table 2. Age (p < 0.0001), insurance status (p = 0.0002), patient residence (p = 0.0145), median household income (p = 0.0059), Charlson–Deyo comorbidity score (p < 0.0001), PSA (p = 0.0131, Figure 4), and GS (p < 0.0001, Figure 5) demonstrated statistically significant differences in OS on univariate analysis (UVA) for the matched group. All other factors on UVA did not demonstrate statistically significant differences. 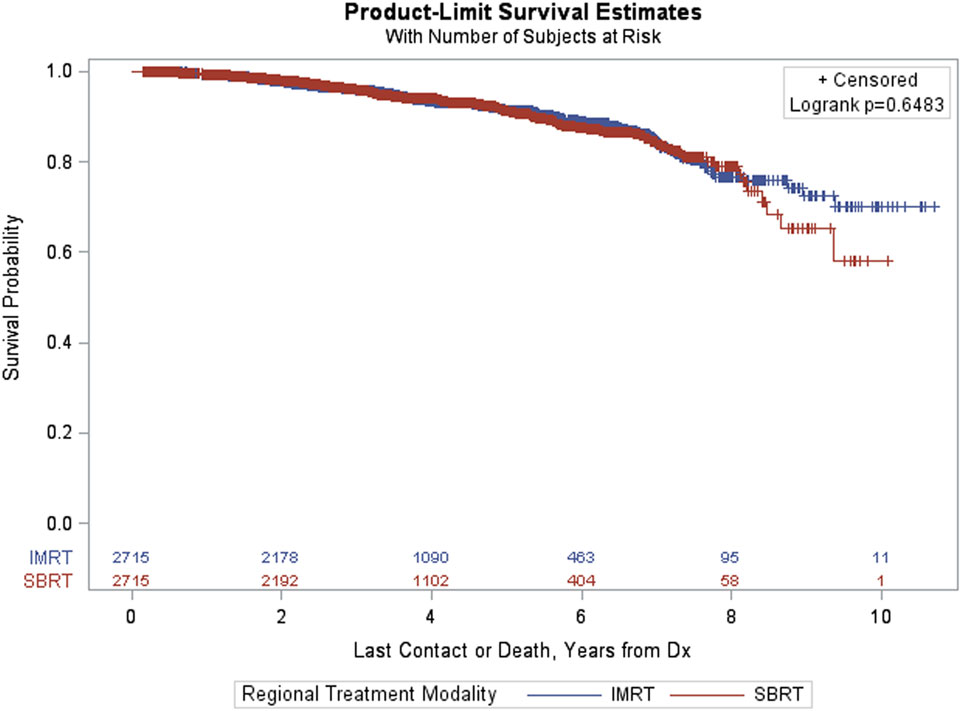 Table 2. Estimated KM overall survival at 8 years for all variables. 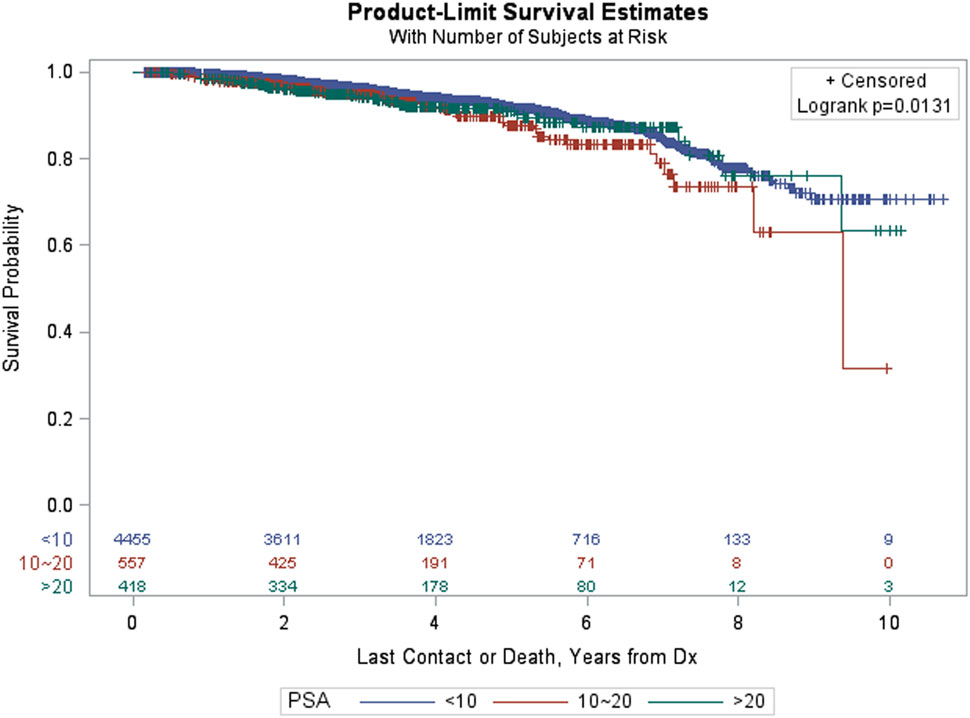 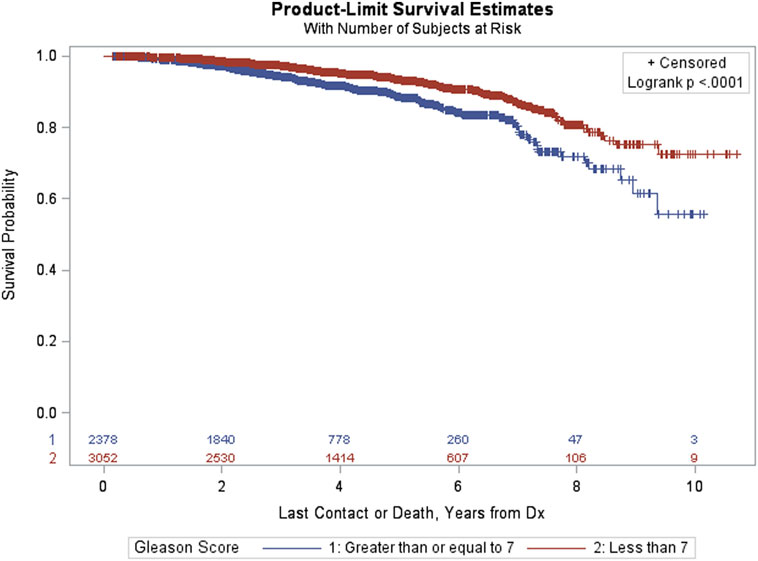 In order to further characterize the effect of treatment modality among higher risk prostate cancer patients, three additional PSM analyses (1–1 nearest neighbor matching without replacement) were carried out within patients having a pretreatment PSA > 10 or GS > 7 or GS = 7.

The PSM analysis of patients with PSA > 10 resulted in a matched sample of 1,020 (510 in each group). The groups were well matched on the basis of ASMD values below 0.20, and thus differences between treatment groups (IMRT vs SBRT) could be carried out using a Kaplan–Meier curve and a log-rank test (Figure 6). The p-value corresponding to the log-rank test was again above 0.05 (p = 0.5847), indicating that there were no statistically significant differences between treatment groups after matching. 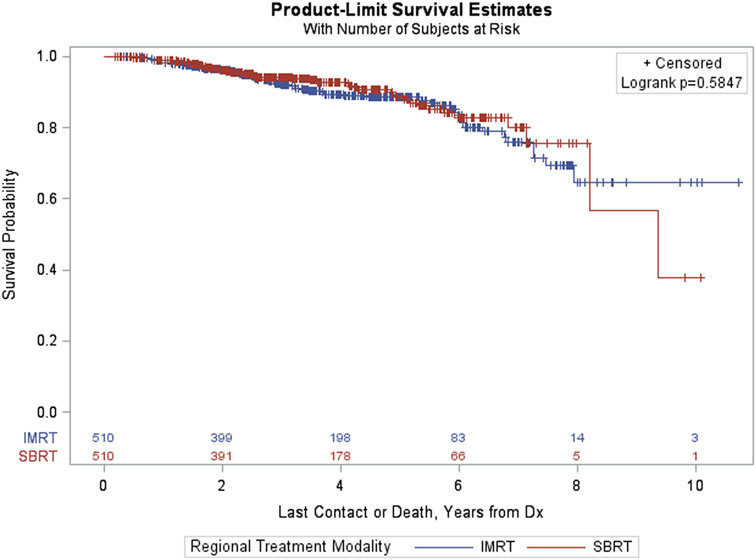 Among patients with GS > 7, PSM resulted in a matched sample of 274 (137 in each group). Again, the groups were well matched and differences between treatment groups (IMRT vs SBRT) resulted in a non-significant log-rank p-value (p = 0.6179, Figure 7). 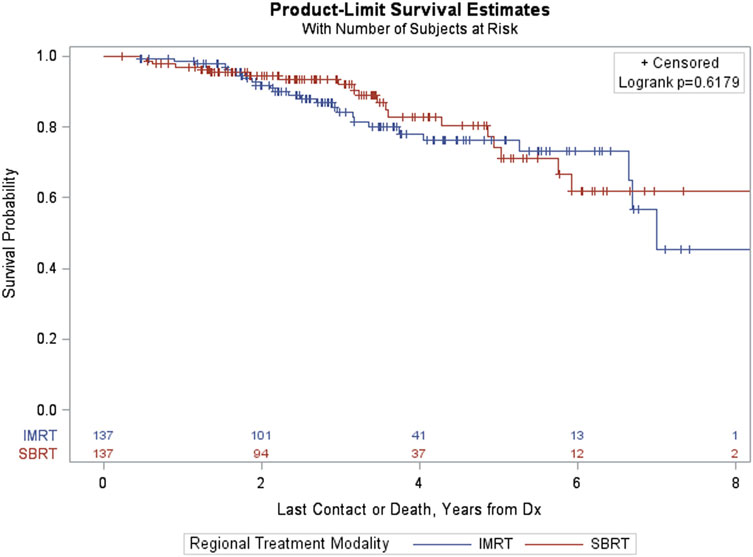 Finally, the PSM analysis of patients with GS = 7 resulted in a matched sample of 2,194 (1,097 in each group). The groups were well matched and differences between treatment groups (IMRT vs SBRT) resulted in a non-significant log-rank p-value (p = 0.6789, Figure 8). 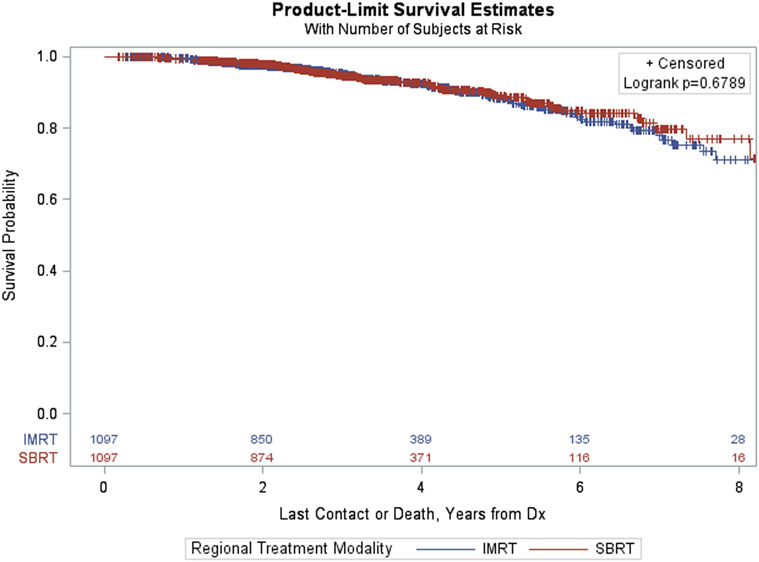 No significant difference in survival between SBRT and IMRT for localized prostate cancer was found utilizing the NCDB with PSM matching at 8 years. In addition, we found no significant difference in OS between the two treatment modalities in matching high-risk subpopulations of GS = 7 or GS > 7 or PSA > 10. As expected, differences in OS by patient and clinical characteristics were observed among men with older age, higher comorbidity score, higher GS, and higher PSA.

The strength of the current study is the large number of patients allowing for 8-year survival estimates by known risk factors for prostate cancer as well as other demographic and treatment factors not normally evaluated in single institutional or randomized trials. This database is homogeneous with regard to treatment technique with only men treated to the prostate with IMRT or SBRT analyzed. The database is homogeneous with regard to dose with stratification by low-, intermediate-, and high- dose groups for matching. Patients with no follow- up or outliers with regard to dose were excluded.

A weakness of this study is that survival is the only outcome available—specifically, there is no biochemical or toxicity information. With the 2017 NCCN risk stratification, however, survival is the most important outcome parameter with treatment recommended only if at least 10-year survival is expected based on medical status. The NCDB potentially includes selection bias since only accredited hospitals input data which could represent patients receiving higher quality care. As such this analysis may not be a true population-based study which limit’s the study generalizability (8, 9).

Intensity modulated radiation therapy continues to be a standard radiotherapeutic technique for the definitive treatment of localized prostate cancer using a conventionally fractionated approach with 1.8–2.0 Gy fractions 5 days per week over 8–9 weeks. A decade of data supports this fractionation scheme for localized prostate cancer, with excellent biochemical control, OS, and acceptable toxicity. Dose-escalation trials revealed improved biochemical freedom from relapse (BFFR) in certain trials but no difference in survival as updated in a 2015 systematic review (1, 10–14).

Moderate hypofractionated radiotherapy for prostate cancer has been studied in six phase III randomized trials with varied number of fractions (19–30) and doses (52.5–72 Gy). Two of the trials were carried out before dose-escalation was known and therefore delivered insufficient dose (15, 16). Three of the trials showed no significant difference reported in BFFR, OS, or toxicity compared with conventional fractionation for prostate cancer with median follow-up from 51 to 90 months (17–19). The recent 5-year data published from the non-inferiority HYPRO trial of intermediate- and high-risk patients concluded that dose-escalated moderate hypofractionation was not superior with comparable relapse-free survival but higher toxicity profiles compared with standard fractionation (20, 21).

The Technology Assessment produced by the Agency for Healthcare Research and Quality, “Comparative Evaluation of radiation treatments for clinically localized prostate cancer: an update,” analyzed 60 high-quality studies including 9 RCTs, and determined that there is insufficient evidence to support either SBRT vs IMRT, noting that there was no high-quality study comparing SBRT to any other radiation modality. The Institute of Medicine has also included prostate cancer comparative effectiveness research in the “top quartile” group for priority (31). This NCDB PSM analysis for clinically localized prostate cancer compares these two radiation treatment modalities with a large sample size and provides evidence to suggest no difference in OS through 8 years.

In a PSM analysis of the NCDB, no difference in OS was observed when comparing IMRT to SBRT in the treatment of localized prostate cancer. Subset analyses of intermediate- and high-risk patients (Gleason score = 7 or >7 or PSA > 10) confirmed no observed difference in OS by treatment within these populations. We await randomized data to confirm these survival findings.

Ethics statements were placed in the body of Section “Materials and Methods” in the manuscript.

All authors contributed to the conception and design, analysis, interpretation of data, drafting of the abstract, and its revision for important intellectual comment.

RL is a partial stockholder of Philadelphia Cyberknife. All authors have read and approved the manuscript. We have no financial disclosures. We are not using any copyrighted information, patient photographs, identifiers, or other protected health information in this paper. No text, text boxes, figures, or tables in this article have been previously published or owned by another party.

We kindly thank the Radiosurgical Research Institute for providing us the necessary funding through a Research Grant for statistical support.

Copyright: © 2017 Ricco, Hanlon and Lanciano. This is an open-access article distributed under the terms of the Creative Commons Attribution License (CC BY). The use, distribution or reproduction in other forums is permitted, provided the original author(s) or licensor are credited and that the original publication in this journal is cited, in accordance with accepted academic practice. No use, distribution or reproduction is permitted which does not comply with these terms.