Background: Skin toxicity is a common adverse event during cetuximab (Cmab) treatment. However, few reports have investigated the correlation between skin toxicity and the efficacy of Cmab in patients with recurrent or metastatic squamous cell carcinoma of the head and neck (R/M SCCHN).

Methods: We retrospectively reviewed 112 R/M SCCHN patients who received palliative chemotherapy with Cmab. Main eligibility criteria included primary disease in the oral cavity, hypopharynx, nasopharynx, oropharynx, or larynx; no prior history of EGFR-directed therapy; receipt of Cmab plus chemotherapy as first-line therapy for recurrent or metastatic disease; and follow-up for more than 90 days. We analyzed the time to first occurrence and time of maximum grade skin toxicity, and its predictive value with regard to treatment efficacy.

Head and neck cancer is the sixth-most common cancer, and more than 600,000 new cases are diagnosed annually worldwide (1, 2). In Japan, approximately 20,000 new cases are diagnosed annually (3). Despite optimal treatment, locoregional recurrence will occur in 60% of these patients, often in irradiated areas, and distant metastasis will develop in 20%. The prognosis of patients with recurrent or metastatic disease is poor and their therapeutic options are limited, with most requiring palliative chemotherapy.

Cetuximab (Cmab) is an epidermal growth factor receptor (EGFR) inhibitor which plays an important role in epithelial malignancies, including squamous cell carcinoma of the head and neck (SCCHN). The phase III EXTREME trial reported that the addition of Cmab to platinum/5FU significantly improved overall survival (OS), progression-free survival (PFS) and response compared with platinum/5FU in first-line treatment of patients with recurrent or metastatic squamous cell carcinoma of the head and neck (R/M SCCHN) (4). Accordingly, the regimen has been recognized as a standard care for the disease worldwide, including Japan. One of its major side effects is skin toxicity, manifesting as a skin rash, acneiform rash, paronychia, dry skin, hair growth disorders, pruritus, or nail changes. Studies in multiple malignancies have shown that there is no apparent difference in the incidence or severity of Cmab-induced skin toxicity between races, while, the occurrence of more severe Cmab-induced skin toxicity correlates with better treatment response and longer survival (5–15). However, this correlation of Cmab-induced skin toxicity with efficacy has not been shown for R/M SCCHN. Here, we examined whether Cmab-induced skin toxicity predicts treatment efficacy in patients with R/M SCCHN.

We have reviewed the medical records of R/M SCCHN patients who received palliative chemotherapy with Cmab in various combination (5-FU + cisplatin; CDDP or carboplatin: CBDCA + Cmab, paclitaxel: PTX + CBDCA + Cmab and PTX + Cmab) at the National Cancer Center Hospital East Japan between December, 2012 and December, 2016 (Table 1). Main eligibility criteria were age ≥20 years; primary disease in the oral cavity, hypopharynx, nasopharynx, oropharynx, or larynx; no prior history of EGFR-directed therapy; receipt of chemotherapy plus Cmab as first-line therapy for recurrent or metastatic disease; and follow-up for more than 90 days. All patients received Cmab at a dose of 400 mg/m2 IV on day 1 and 250 mg/m2 weekly thereafter. In the Cmab plus platinum agent (cisplatin or carboplatin) group, patients who had at least stable disease received Cmab monotherapy (maintenance therapy) until disease progression or until unacceptable toxic effects occurred after a maximum of six cycles of platinum administration. In the paclitaxel and Cmab group, patients received these agents until paclitaxel-induced toxic effects became unacceptable, after which they continued with Cmab maintenance until disease progression occurred. The patients were not included in a consecutive way. In accordance with the MASCC guidelines (16), we used prophylactic therapy for Cmab-induced skin toxicity, consisting of a skin moisturizer (heparinoid lotion) applied to the body and face twice a day, and oral minocycline 100 mg twice a day, which was started at the beginning of the Cmab-containing regimen. In addition, topical steroids were initiated after the emergence of any skin toxicities. Difluprednate (very strong) 0.05% and hydrocortisone butyrate (mild) 0.1% were applied to the body and face, respectively. The study was approved by the Clinical Research and Ethical Review Board of our institution (task number: 2016-229). 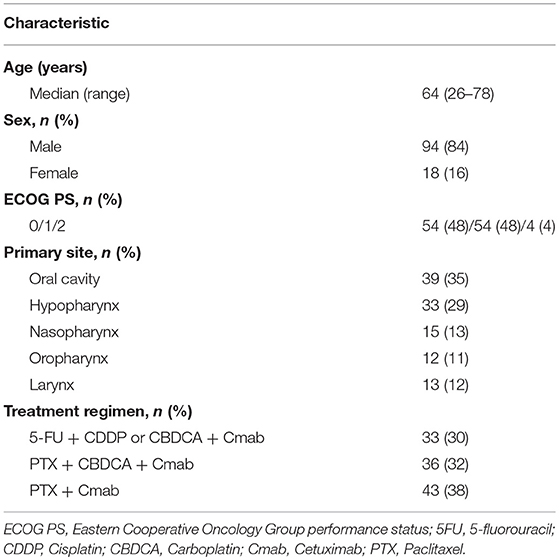 The Cmab-induced skin toxicity was evaluated and graded using the Common Toxicity Criteria for Adverse Events (CTCAE version 4.0) by the same medical oncologist in charge per patient throughout the treatment. The dermatologist (NA) and registered pharmacist (US) supervised and supported the evaluation to share the same criteria and to reduce inconsistency in observation.

When the grade 3 or worse skin toxicities were observed at the day of Cmab administration, physician omitted Cmab at least one week, and restarted it after the toxicity recovered to Grade 2 or less. In addition, if it is judged that trend of exacerbation was apparent, physician could skip Cmab even in the case of grade 2 skin toxicity, and restarted it as soon as the toxicity recovered to acceptable Grade 2 or less. For patients who experienced Cmab interruption, additional medications (e.g., oral antihistamine and antibiotics, topical antibiotics and a higher-potency topical steroid) were considered at a physician's and dermatologist's discretion. Additionally, when Cmab interruption continued even though the additional medication was given, dose reduction of Cmab could be applied (e.g. dose level 0: 250mg/m2, dose level−1: 200mg/m2, dose level−2: 150mg/m2). In case that further dose reduction is required after doses of cetuximab reduced by 2 levels, the discontinuation of Cmab was considered.

We analyzed the time to first occurrence and time of maximum grade skin toxicity and its predictive value with regard to treatment efficacy. PFS was defined as the period from the commencement of treatment to the date of confirmation of disease progression or death. OS was determined as the period from the commencement of treatment to the date of death from any cause or the date of the last follow-up. PFS and OS were calculated by the Kaplan–Meier product-limit method. The landmark-time analysis was applied to PFS and OS counted from 90 days after the start of therapy. Hazard ratios (HRs) were calculated by Cox regression analysis. Univariate analyses were undertaken to evaluate the relationship between the pretreatment clinical variables and the risk of development of skin toxicity using the χ2 test or Fisher's exact test. Multivariate analysis was undertaken using logistic regression to identify significant factors associated with PFS and OS. We used SPSS software (version 17.00, SPSS, Inc., Chicago, IL, USA) for the statistical analysis. P < 0.05 were considered to indicate statistical significance. 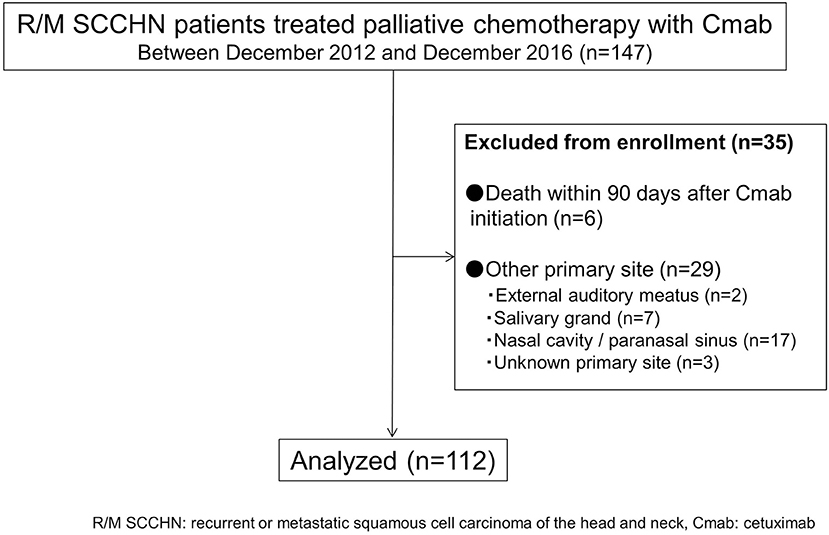 There were no apparent differences in sex, age, primary site, type of combination, treatment regimen, performance status, or body surface area between patients with and without skin toxicities (Table 3.

Interruption and Discontinuation of Palliative Chemotherapy With Cmab 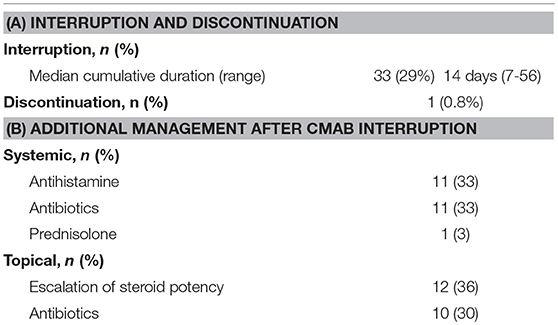 Table 4. Interruption and discontinuation due to Cmab-induced skin toxicity.

Predictive Value of Cetuximab-Induced Skin Toxicity for OS and PFS 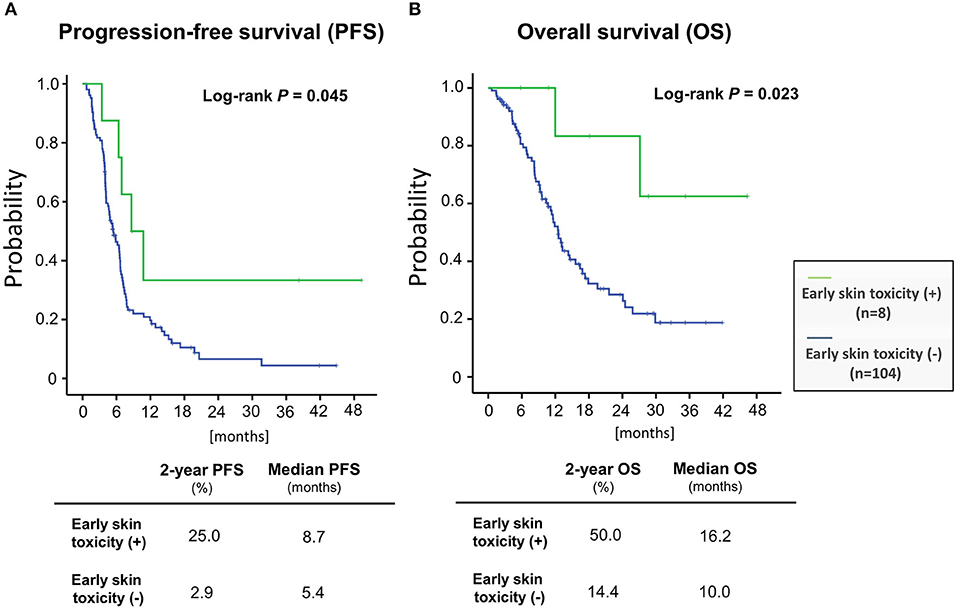 Figure 2. Patient prognoses stratified according to the presence or absence of early skin toxicity (A) progression-free survival (B) overall survival. 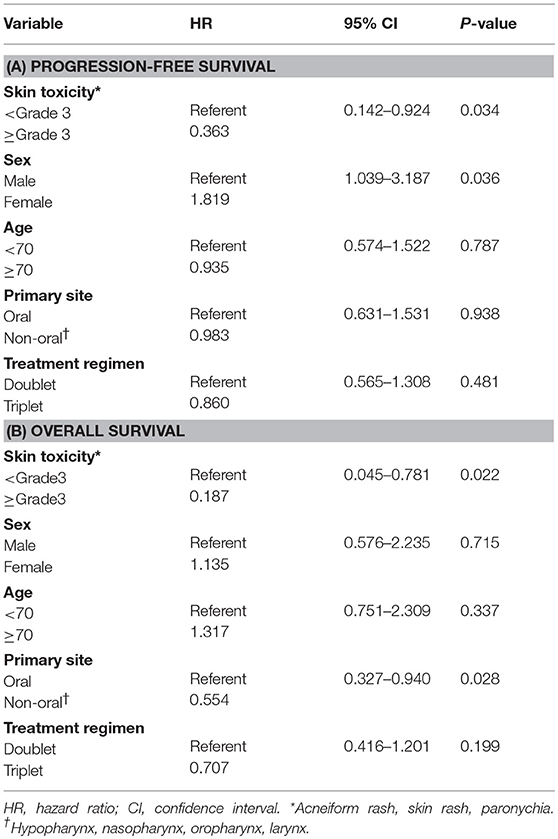 Several reports have indicated a correlation between the severity of Cmab-induced skin toxicity and treatment efficacy, including a retrospective review of Cmab with radiotherapy for SCCHN that showed a better outcome in patients with a G2-4 rash (5–14). However, few studies have focused on the correlation between Cmab-induced skin toxicity and efficacy in R/M SCCHN. Klinghammer et al. observed a trend toward longer PFS and OS in patients who experienced grade 1 rash compared with those with grade 0 among R/M SCCHN patients who were treated with the combination of Cmab and docetaxel (17). In our present study, we found that severe (≥grade 3) Cmab-induced skin toxicity within 90 days (“early skin toxicity”) is an independent and more robust predictive factor for a favorable clinical outcome after adjusting for sex, age, primary site and treatment regimen (with HR of 0.363 for PFS and HR of 0.187 for OS). Consistent with this finding, patients with early skin toxicity had a better prognosis than that of the entire Cmab plus chemotherapy group in the EXTREME study (2-year OS: 50 vs. 14%) (18). Furthermore, the majority of patients (88%) with early skin toxicity in the current study proceeded to Cmab maintenance therapy, vs. fewer than half of patients (45%) in the Cmab plus chemotherapy group in the EXTREME study. These findings indicate that early skin toxicity is a promising predictor of outcome in treatment with a Cmab-containing regimen in R/M SCCHN.

Recently, there has been a focus on identification of patients with increased risk of developing EGFR inhibitor-induced rash. At the basic research phase of SCCHN, an EGFR-R521K genotype (G/G) was reportedly associated with increased Cmab-induced skin toxicity (20). Other reports, which included SCCHN patients, found a significant inverse correlation between the plasma concentration of hepatocyte growth factor and EGFR inhibitor-induced rash (17). On the other hand, identification of clinical factors related to the occurrence of Cmab-induced skin toxicity in SCCHN is still lacking, and we were also unable to identify such factors in the present study (Table 3). Men and younger patients with colorectal cancer are considered to be at greater risk of severe Cmab-induced rash (15), but skin toxicity also warrants careful attention in all SCCHN patients who receive Cmab.

Our present analysis suggested that the occurrence of ≥ grade 3 Cmab-induced skin toxicity within 90 days after the initiation of Cmab was associated with a better prognosis in R/M SCCHN. At the moment, we do not have sufficient clinical knowledge to predict the occurrence of the sing beforehand, which may reflect a different immune status of the patients. However, it is likely important to avoid delays or discontinuation of Cmab, particularly in patients with rapid skin reaction, considering that Cmab appears to play an important role as the mainstay of treatment in this population.

MT and SO receive honoraria from Merck Serono.

This manuscript was prepared without the help of any funding source. The authors thank all patients as well as co-investigators for supporting the study.

Copyright © 2018 Uozumi, Enokida, Suzuki, Nishizawa, Kamata, Okano, Fujisawa, Ueda, Okano, Tahara and Yamaguchi. This is an open-access article distributed under the terms of the Creative Commons Attribution License (CC BY). The use, distribution or reproduction in other forums is permitted, provided the original author(s) and the copyright owner(s) are credited and that the original publication in this journal is cited, in accordance with accepted academic practice. No use, distribution or reproduction is permitted which does not comply with these terms.