Methods: Patients diagnosed with atypical meningioma from 2008 to 2015 were extracted from the Surveillance, Epidemiology, and End Results (SEER) database. The Kaplan–Meier survival curves were generated, and the log-rank test was used to compare the differences among groups. Univariable and multivariable COX regressions were conducted for survival analyses.

Postoperative radiotherapy (PORT) is routinely recommended for meningioma patients undergoing subtotal resection (STR), while for those undergoing gross-total resection (GTR), postoperative therapeutic strategies vary depending on grades (3, 5). After GTR, observation is recommended for patients with WHO grade I meningioma, and PORT is suggested for patients with anaplastic meningioma (3, 5). However, optimal management for atypical meningioma patients after GTR is still controversial, and it is contentiously debated whether these patients can benefit from PORT. Several small studies have been performed to investigate the effect of PORT on atypical meningioma patients after GTR, but led to contradictory results (6–15). A phase II clinical trial (RTOG 0539) suggested that PORT can improve 3-year progression-free survival for intermediate-risk meningioma patients (16).

A recent study based on the National Cancer Database found that GTR and PORT were associated with improved survival for patients with atypical meningioma (17). However, patients who died within 1 month after surgery, most of whom had no opportunity to receive postoperative radiotherapy, were not excluded in that study, which might lead to an abrupt drop at the beginning of the Kaplan–Meier survival curve of patients not receiving PORT, resulting in a false positive result in the comparison of overall survival (OS) between patients receiving and not receiving PORT. Therefore, we aimed to perform this population-based study to assess the effect of PORT on survival outcomes in atypical meningioma patients after excluding those who had an OS time <1 month to reduce the selection bias.

This study was performed based on the Surveillance, Epidemiology, and End Results (SEER) database (18). Patients diagnosed with atypical meningioma from the year 2008 to 2015 were identified using the SEER*Stat software (Version 8.3.5), with International Classification of Diseases for Oncology, Third Edition (ICD-O-3) codes 9539/0 and 9539/1. The demographic and clinical data of the patients were extracted from the database, including age at diagnosis, gender, race, tumor size, extent of resection (EOR), radiation sequence with surgery, survival time and vital status. Patients were excluded if (1) radiotherapy was performed prior to surgery; (2) EOR was not recorded as GTR or STR; (3) race was not recorded; (4) tumor size was not recorded; (5) OS time ≤1 month. The flow diagram of patient selection is shown in Figure 1. This study was ruled exempt from review by the ethics review board at the Second Affiliated Hospital of Zhejiang University school of Medicine. 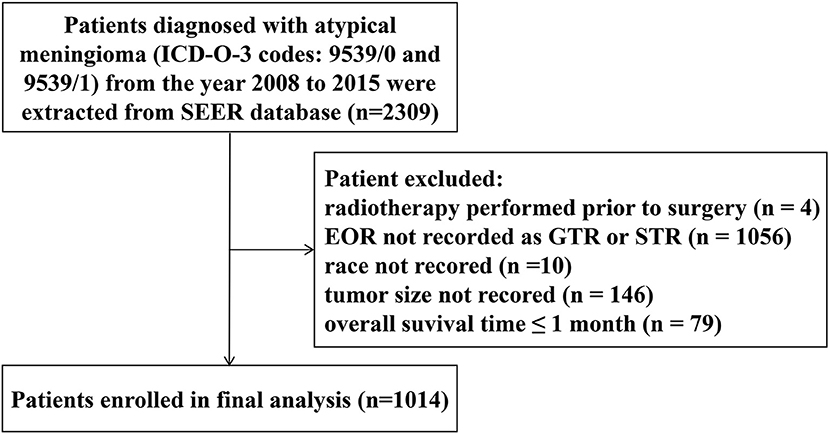 According to the coding instructions of the SEER database (SEER Program Coding and Staging Manual 2018 (draft), available at: seer.cancer.gov/tools/codingmanuals), PORT here refers to first-line postoperative adjuvant therapy, and radiotherapy performed after 1 year of diagnosis or after relapse was not counted. Generally, for meningioma, GTR represents a Simpson grade I, II, or III resection, and STR represents a Simpson grade IV or V resection (19). However, the detailed associations between Simpson grade and GTR or STR were not available from the SEER database.

All statistical analyses were performed with SPSS statistics, v. 22 (IBM, Armonk, NY). Medians with interquartile ranges (IQR) and percentages were used to describe the distribution of continuous and categorical variables, respectively. The Chi-Square test was used to compare differences between two groups for categorical variables. The Kaplan–Meier survival curves were generated, and the log-rank test was used to compare among groups. Univariable and multivariable COX regressions were conducted for survival analyses. Variables with a p < 0.20 in univariable analyses were included in multivariable analysis. A p < 0.05 was considered statistically significant. 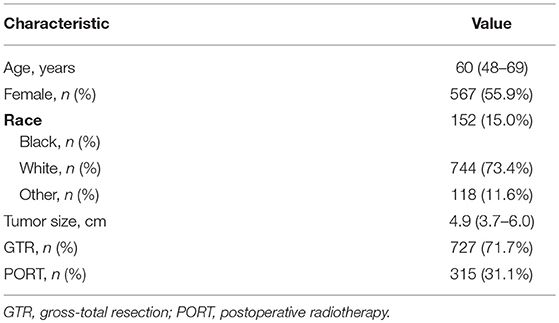 Table 1. Demographic and clinical characteristics of patients with atypical meningioma. 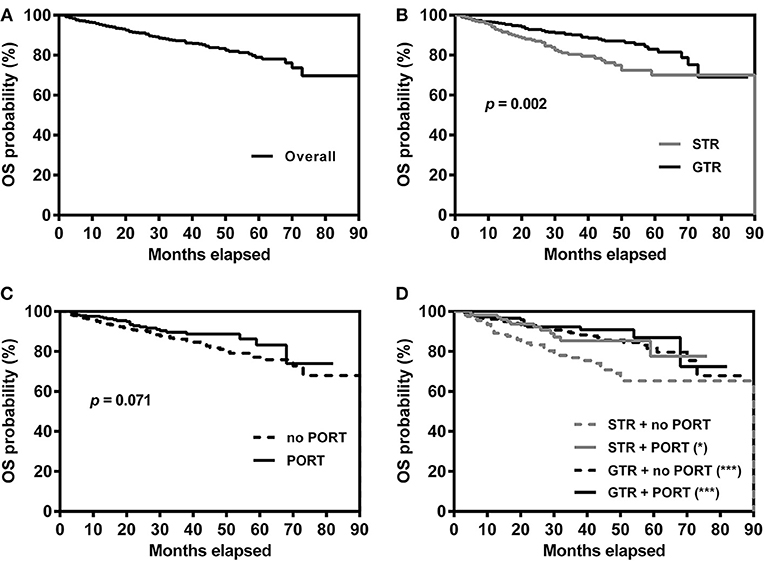 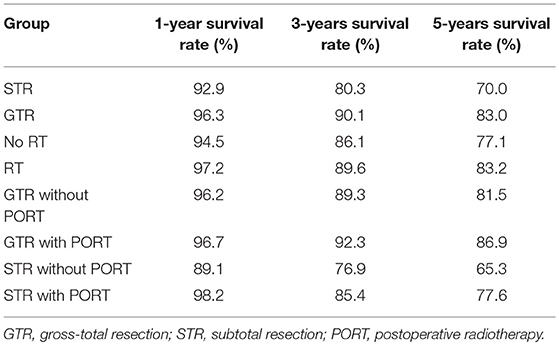 Table 2. Survival rates of the patients grouped by extent of resection and receipt of postoperative radiotherapy.

Optimal postoperative management for atypical meningioma patients undergoing GTR remains a great deal of controversy. It is unclear whether these patients can benefit from PORT. By using the SEER database, the current study found that PORT could not prolong the OS time in atypical meningioma patients undergoing GTR, which indicates that these patients may not benefit from PORT after GTR. Several previous studies have attempted to address the controversy about whether PORT can improve the outcome in atypical meningioma patients undergoing GTR. Some studies did not show significant survival benefit from PORT in these patients (8, 10–14). However, the missing significance has been suspected as a result of small sample size, and some studies also found a contradictory result that PORT could improve the outcome (6, 7, 9, 15). Thus, studies with large sample size are needed to settle the dispute. A recent meta-analysis, with a total of 757 patients included, showed that PORT decreased the risk of tumor recurrence but did not affect the survival time because most recurrent tumors were salvageable with surgery or radiation (20). A previous study based on the SEER database performed by Stessin's et al. found that PORT did not impart a survival benefit for the patients with grade II and III meningioma after adjustment (21). However, that study enrolled patients diagnosed with meningioma between 1988 and 2007. Brain invasion has been added as a grading criterion for grade II meningioma in the 2007 WHO classification and new 2016 WHO classification, and the proportion of WHO grade II meningioma has obviously increased since 2007 (16). By enrolling 1,014 patients diagnosed with atypical meningioma between 2008 and 2015, our study provides further evidence that PORT may not prolong the survival time in patients undergoing GTR.

The reported incidence of treatment toxicity for atypical meningiomas after PORT ranged from 3.4 to 16.7% (22). Although side effect of radiotherapy is usually mild, it has been pointed out that radiotherapy may increase the risk of malignant transformation (3). Besides, blindness occurred in about 5% of patients receiving 50 Gy radiation due to irradiation of the optic apparatus, and seizure was reported in 4.2% of patients (22, 23).

Perioperative mortality was typically defined as death within 1 month after surgery (24, 25). The reported perioperative mortality rate of meningioma patients was 1.9 or 6.1% (25, 26). Most of the patients who die within 1 month after surgery do not have the opportunity to receive postoperative radiotherapy. Including these patients in analyses will lead to an abrupt drop at the beginning of the Kaplan–Meier survival curve of patients not receiving PORT, which can be seen in several previous studies (4, 11, 17). This may result in a false positive result in the comparison of OS between patients receiving and not receiving PORT. Thus, we recommend that patients with very short survival time should be excluded in such studies. In the current study, we excluded patients who had an OS time ≤1 month to reduce the selection bias.

The major strength of this study is the large sample size. However, there are several limitations in this study. First, this is a retrospective study, and inherent limitation exists in this kind of study, such as potential selection bias in treatment modalities offered. Second, progression free survival (PFS) time is not available from the SEER database, making it impossible to analyze the effect of PORT on PFS in atypical meningioma patients. Third, some other important information, such as Simpson grade and status of brain invasion, was also not available from the SEER database. Further heterogeneity in overall survival may exist when stratified by the status of brain invasion or Simpson grade. Forth, the PORT techniques performed on the patients were not standardized. Fifth, the record of PORT in the SEER database is not completely certain. PORT received outside of the hospital setting might be not captured in the SEER, then the patient might be misclassified into no PORT group. Considering such limitations in this study, a well-designed multicenter prospective study is needed to further investigate the impact of PORT on the outcome of atypical meningioma patients. Currently, two phase III trials, ROAM-EORTC 1308 (27) and NRG-BN003 (https://clinicaltrials.gov/ct2/show/NCT03180268), are now ongoing to evaluate the effectiveness of adjuvant radiotherapy in reduction of recurrence risk in atypical meningioma patients who have undergone gross total resection. The results of these well-designed trials will help to address the controversy about the effectiveness of PORT in atypical meningioma patients.

This study was supported by the National Natural Science Foundation of China (grant no. 81801654).

Copyright © 2019 Zeng, Shi and Guo. This is an open-access article distributed under the terms of the Creative Commons Attribution License (CC BY). The use, distribution or reproduction in other forums is permitted, provided the original author(s) and the copyright owner(s) are credited and that the original publication in this journal is cited, in accordance with accepted academic practice. No use, distribution or reproduction is permitted which does not comply with these terms.