Intracranial epidermoid cysts are benign lesions that typically remain asymptomatic; however, although histopathologically benign, these cysts can rarely undergo malignant transformation into squamous cell carcinoma. Primary intracranial squamous cell carcinoma carries a poor prognosis as optimal treatment modalities remain unclear due to their low incidence. Here, we present a case of a cerebellopontine angle epidermoid cyst remnant that underwent malignant transformation into squamous cell carcinoma 40 years after partial resection. To our knowledge, this case establishes the longest time interval to date for an intracranial epidermoid cyst to undergo malignant transformation. We also review the relevant literature and discuss recent retrospective clinical studies that have analyzed the effect of multimodal treatment approaches on survival outcomes in patients with these lesions.

Intracranial epidermoid cysts (ECs), also known as cholesteatomas, are rare benign, slow-growing lesions that account for 0.2–1.8% of intracranial tumors (1). Although classified as a benign entity based on histopathology and potentially curable with neurosurgical gross total resection, ECs can rarely undergo malignant transformation (MT) into squamous cell carcinoma (SCC). Since first described in 1912, only 15 cases of malignant cyst transformation have been reported to occur >5 years from time of initial surgery (2–16). Here, we describe a case of an EC remnant in the cerebellopontine angle (CPA) that underwent MT into SCC 40 years after partial resection. To our knowledge, this case establishes the longest time interval to date for an intracranial epidermoid cyst to undergo malignant transformation. The patient described in this report provided written informed consent for its publication.

A 71-year-old man presented to the emergency department with 2 months of progressively worsening diplopia, dizziness, headache, and ataxia. He also admitted to a 25-pound weight loss over the past few months. Past medical history was significant for partial resection of a left CPA EC 40 years prior and resection of urothelial carcinoma 2 years prior. Physical examination revealed a left abducens palsy, left facial droop, diminished hearing on the left as well as decreased sensation to light touch and pinprick on the left side of his face in all distributions of the trigeminal nerve. The cystic appearing component of the lesion was T1 hypointense, T2 hyperintense, and peripherally enhancing within the left CPA wrapping around the lateral brainstem. Adjacent to the cystic lesion was a T1 isointense, T2 hyperintense, avidly enhancing infiltrative component involving the brainstem, cerebellar peduncle, and cerebellum (Figure 1). A metastatic workup was negative. Initial differential diagnoses included: recurrent EC, SCC, arachnoid cyst, dermoid cyst, and neurenteric cyst. The patient was started on dexamethasone and scheduled for elective debulking of his brainstem lesion 2 weeks after initial hospitalization. 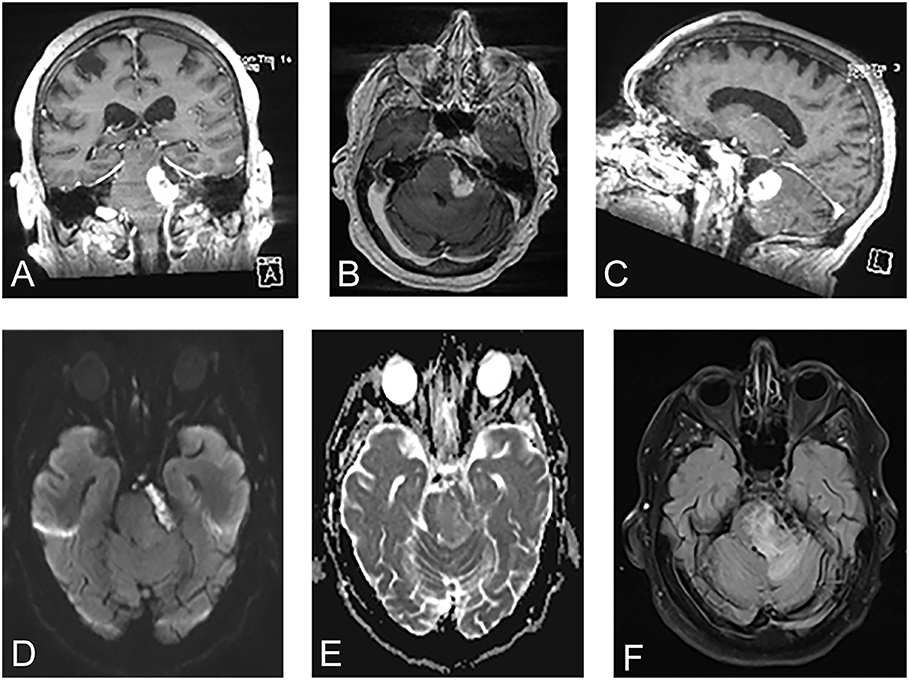 Using the prior incision, the mass was approached with a standard retrosigmoid craniotomy. Stereotactic navigation and intraoperative neuromonitoring were utilized. Release of cerebrospinal fluid upon accessing the CPA afforded substantial relaxation of the cerebellum revealing a scarred capsule, which appeared similar to a pseudomeningocele. The capsule was then sharply incised and, once opened, stimulated with a monopolar probe to ensure cranial nerves were not in the vicinity. The enhancing portion of the lesion was extremely adherent to the brainstem. Furthermore, it was fibrous in nature and did not yield obvious planes for microsurgical dissection. The lesion was debulked from the inside out, expressing caseous material. The basilar artery, which was running through the capsule, was then skeletonized out. Pathology demonstrated keratinizing SCC with some sections consisting of almost entirely anucleated keratin material (Figure 2). Immunoreactivity for cytokeratin 5/6 was strong. Post-operatively, the patient regained sensation in the ophthalmic nerve dermatomal distribution; however, his other pre-operative symptomatology persisted. Adjuvant therapy included post-operative stereotactic radiosurgery with 25 Gy in five fractions.

Intracranial SCC is typically seen as a manifestation of metastases from a primary origin found outside the central nervous system or due to direct invasion of primary head and neck malignancy. However, although rare, MT of an intracranial EC into SCC is a well-documented phenomenon (2–23). According to Garcia et al. and Hamlat et al., true MT into SCC can only be classified as primary intracranial if it satisfies six criteria (Table 1) (17, 18). Moreover, as per the Hamlat et al. classification schema, MT of intracranial ECs can be sub-classified into five distinct entities including: (i) initial MT of an EC, (ii) MT from a remnant EC, (iii) MT with leptomeningeal carcinomatosis, (iv) SCC arising from other benign cysts, or (v) other malignancies arising from benign cysts (18). Since Ernst et al. reported the first case in 1912 there have been 74 documented cases of MT of an EC that have fulfilled the Garcia and Hamlat criteria (2–23). However, most of these previously reported cases were discovered within ECs at time of initial surgery or autopsy. Nevertheless, optimal treatment modalities as well as survival outcomes for these lesions remain unclear in the literature due their rarity.

Our literature review found that it is extremely rare for MT of an EC to occur >5 years from initial surgery. Indeed, only 15 cases (excluding the present case) have been reported to date (Table 2) (2–16). Of the reported cases, age at diagnosis of malignant cyst transformation ranged between 37 and 74 years with an average age of 54 years. Of these 15 cases, 10 patients (66.7%) were females. All 15 patients underwent surgical resection. Seven patients were subsequently treated with adjuvant radiotherapy or stereotactic radiosurgery. The interval from first surgical intervention to MT ranged from 5 to 33 years with a mean of 15.4 years. The most common location of the lesion was the CPA. Here, we presented a case of a 71 year-old male who was originally diagnosed with a CPA benign EC at the age of 31. Remarkably, after 40 years of clinical silence, his EC remnant underwent MT into SCC.

Although surgical resection is the current standard of care for the treatment of intracranial ECs, there is currently no accepted treatment modality for cysts that malignantly transform. Several retrospective clinical studies have attempted to define optimal treatment modalities. Hamlat et al. determined the mean survival in patients who underwent surgical resection (n = 9) vs. surgical resection plus post-operative radiotherapy ± chemotherapy (n = 24) to be 10 and 28 months, respectively (log-rank test, P = 0.077) (18). Although statistically non-significant, the authors advocated for adjuvant radiotherapy as most patients in their cohort who underwent this adjuvant treatment survived for >1 year. Similarly, Nagasawa et al. reviewed overall survival data in 36 patients who underwent surgical resection vs. surgical resection plus post-operative radiotherapy (20). They found that compared to a mean survival of 6.6 months in patients treated with surgery alone (n = 18), patients treated with surgery plus adjuvant radiotherapy (n = 18) demonstrated an increase in mean survival to 12.7 months (log-rank test, P < 0.003) (20). Importantly, no significant correlation was noted between dose of radiation and survival outcome. Tamura et al. performed a meta-analysis for survival outcomes in 24 cases investigating the clinical benefit of post-operative stereotactic radiosurgery (10). The authors found the median survival times for the surgery alone group (n = 9), surgery with radiotherapy group (n = 11), and surgery with stereotactic radiosurgery group (n = 4) to be 1, 18, and 44 months, respectively (log-rank test, P < 0.004) (10). Although limited by sample size and publication bias, these prior two studies retrospectively found a statistically significant short-term survival benefit with use of surgery with adjuvant radiotherapy or adjuvant stereotactic radiosurgery compared to surgery alone.

Malignant transformation of an intracranial EC is a rare occurrence with strict criteria defining its diagnosis. Here, we described a case of an EC remnant in the CPA which underwent MT into SCC 40 years after partial resection. To our knowledge, this case establishes the longest time interval to date for an intracranial EC to undergo MT.

The patient described in this report provided written informed consent for its publication.

JC: Primary author of manuscript. JC, CR, CB, LA, JE, and EM: Provided substantial contributions to the conception and design of the manuscript, contributed to manuscript revision, read, and approved the submitted version and agree to be accountable for all aspects of the work ensuring that questions related to the accuracy or integrity of any part of the work are investigated and resolved.

Copyright © 2019 Cuoco, Rogers, Busch, Apfel, Entwistle and Marvin. This is an open-access article distributed under the terms of the Creative Commons Attribution License (CC BY). The use, distribution or reproduction in other forums is permitted, provided the original author(s) and the copyright owner(s) are credited and that the original publication in this journal is cited, in accordance with accepted academic practice. No use, distribution or reproduction is permitted which does not comply with these terms.