Background: Platelet activating factor acetylhydrolase 1b catalytic subunit 3 (PAFAH1B3) is associated with a variety of human diseases. However, its function in gastric cancer remains uncertain.

Conclusions: Our findings suggest that PAFAH1B3 may be an oncogene in gastric cancer.

Gastric cancer is a major malignant tumor of the digestive system. It is prone to relapse and metastasis during the late stage and has a high mortality rate (1). At present, there is a lack of effective early diagnostic markers to detect and treat gastric cancer. With the rapid development of high-throughput sequencing technology and transcriptomic research, more driver genes continue to be discovered. However, there remains an urgent need to identify more key driver oncogenes, especially those that affect the composition of the immune microenvironment in gastric cancer.

Platelet activating factor acetylhydrolase 1b catalytic subunit 3 (PAFAH1B3) is one of the catalytic subunits of Platelet-activating factor (PAF) acetylhydrolase, which was reported to play crucial roles in certain types of cancers by regulating PAF activity (2, 3). Previous studies have indicated the association between PAFAH1B3 and cancer progression. For example, PAFAH1B3 expression was found to be higher in hypopharyngeal squamous cell carcinoma tissues than in adjacent non-tumor samples and predicted a poor outcome (4). Selective inhibition of PAFAH1B3 has been reported to impair cancer cell survival (5). However, the role of PAFAH1B3 in gastric cancer remains unknown.

Pearson correlation analysis of PAFAH1B3 mRNA and other mRNAs was performed in gastric cancer using TCGA STAD data. The 300 genes most positively associated with PAFAH1B3 were selected for enrichment analysis to determine the function of PAFAH1B3. Gene ontology (GO) analysis was performed using the EnrichGO function in the clusterProfiler R software package R with the following parameters: ont = all, pvalue-Cutoff = 0.05, and qvalue-Cutoff = 0.05. Gene set enrichment analysis was performed using the gseKEGG and gsePathway functions in clusterProfiler with the following parameters: nPerm = 1,000, minGSSize = 10, maxGSSize = 1,000, and pvalue-Cutoff = 0.05.

We downloaded pan-cancer immune cell infiltration scores from TCGA that were derived from a previously published study (8), the results of which were based on the CIBERSORT analytical tool (9). TCGA gastric cancer samples were divided into two groups according to the median PAFAH1B3 expression (high versus low level), and their immune cell infiltration levels were compared.

AGS, MGC-803, BGC-823, SGC-7901 cell lines were purchased from the Cell Bank of the Shanghai Institute of Cells, Chinese Academy of Science (Shanghai, China). All cell lines were cultured in Dulbecco’s modified Eagle’s medium (Gibco) in 10-cm petri dish (Corning) at 37°C with 5% CO2. Cell transfection was performed using the Lipofectamine 2000 reagent (Invitrogen) according to the manufacturer’s protocol. Briefly, cells were seeded in six-well plates (Corning) and grown to a cell density of 30% and then transfected and cultured at 37°C for a further 48 h, followed by harvesting for quantitative reverse-transcription polymerase chain reaction (qRT-PCR) and other experiments.

Cells in the logarithmic growth phase from each experimental group were trypsinized, resuspended in complete medium, and cultured overnight. On the second day, cell proliferation was evaluated by Cell Counting Kit-8 reagent (Abcam) according to the manufacturer’s protocol. Optical density values at 460 nm were detected using a microplate reader (Molecular Devices, Rockford, IL, USA).

Thirty thousand gastric cancer cells were plated in the upper chamber of the transwell chamber (Corning, USA) in a 24-well plate. 24 h after incubation at 37°C, cells on the top surface of the chamber were removed by wiping. Cells on the bottom surface of the chamber were fixed with 4% paraformaldehyde for 10 min and stained with crystal violet (Beyotime, China) for 5 min. The number of migrated cells were imaged and counted.

Data are expressed as means ± standard deviation. All data were analyzed using SPSS ver. 21.0 software (SPSS, Inc., Chicago, IL, USA). The normality of the data was tested using the Kolmogorov–Smirnov test. Pairwise differences between groups were analyzed using Student’s t-test. Significance was assessed at a level of P < 0.05. 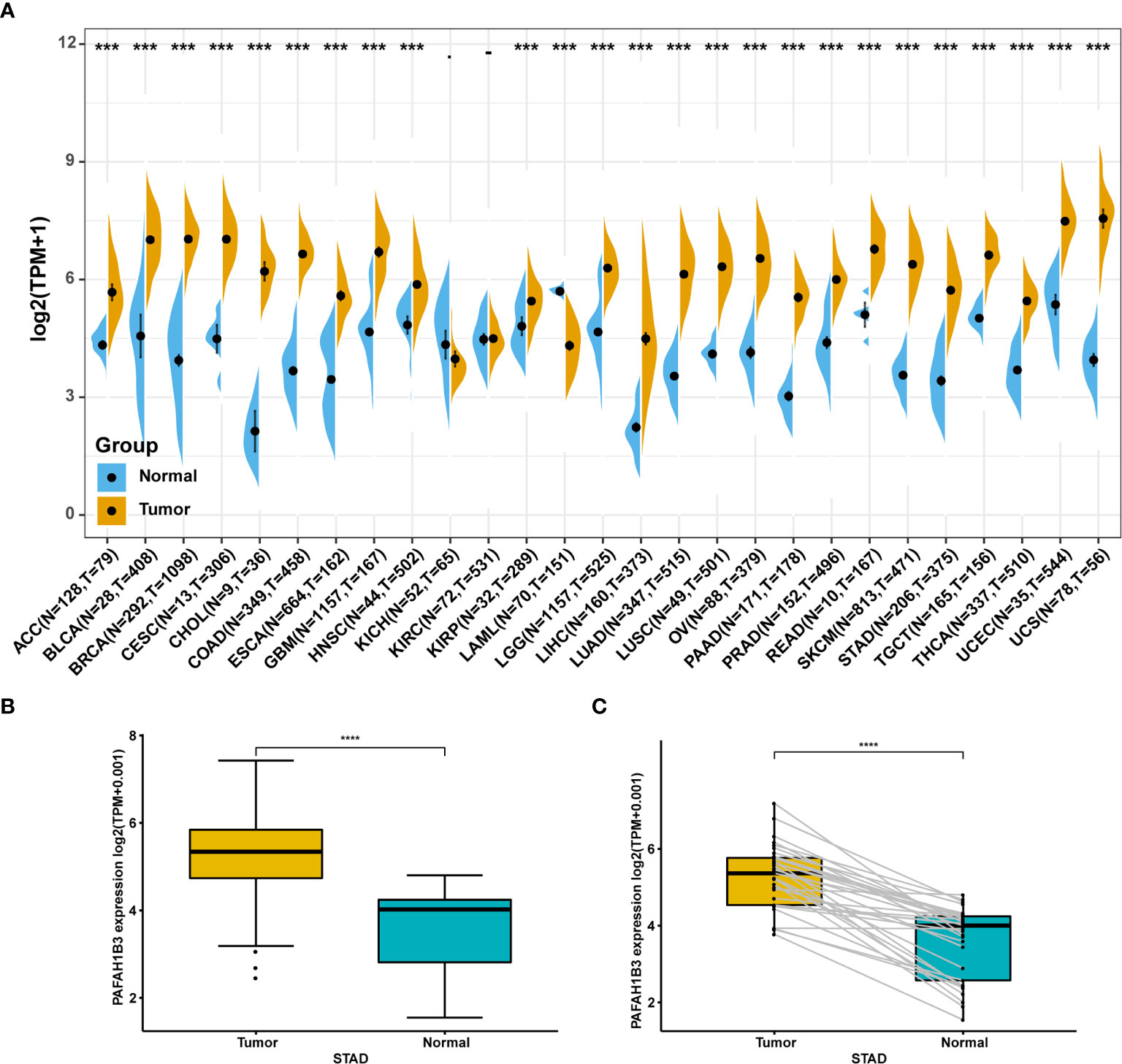 Particularly, high PAFAH1B3 expression was observed in STAD gastric cancer in the TCGA cohort (Figure 1B) compared with the adjacent tissues (Figure 1C), suggesting that PAFAH1B3 may play a role in the pathogenesis of gastric cancer. 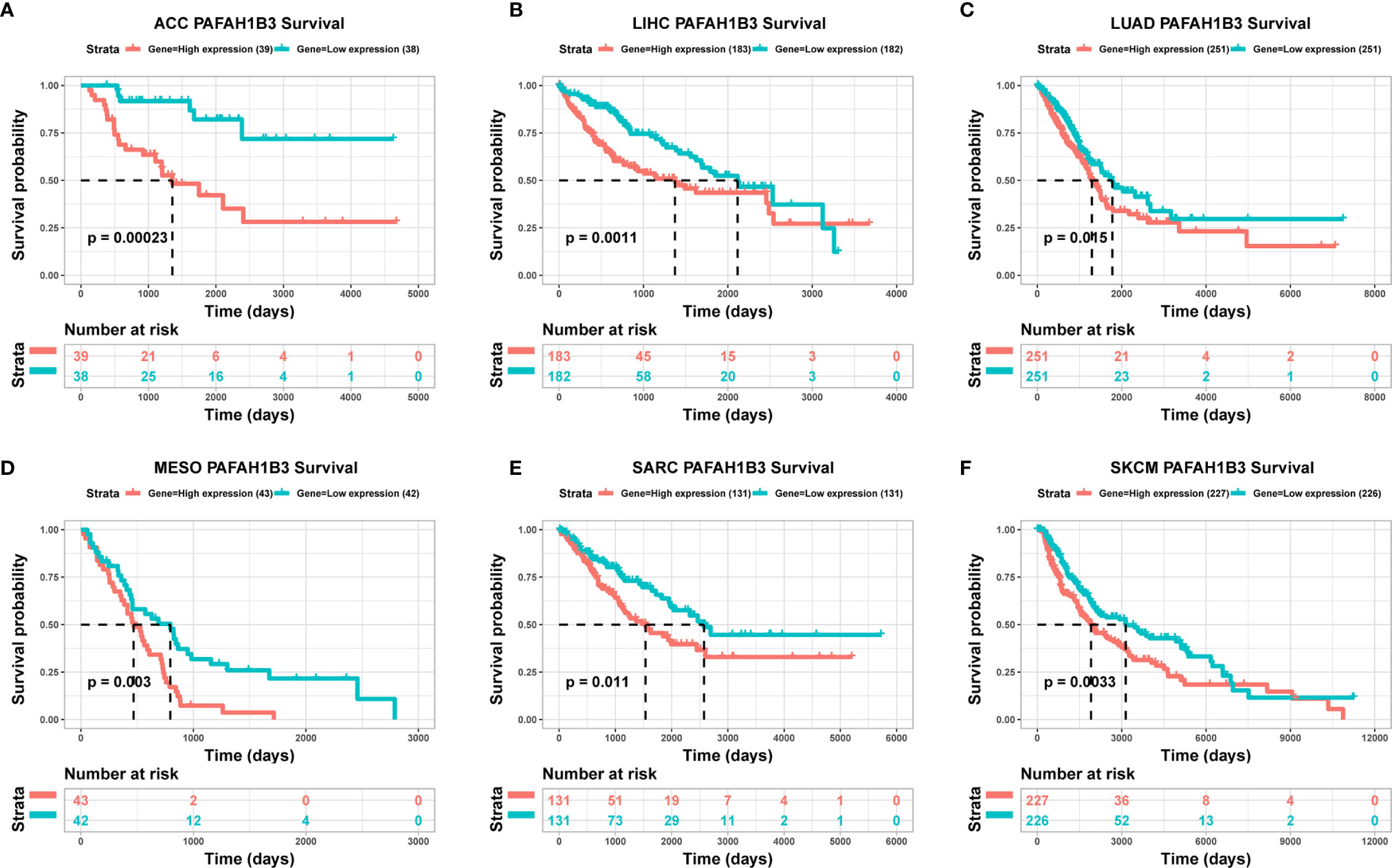 To further explore the functions and pathways affected by PAFAH1B3, we performed correlation analyses between PAFAH1B3 and all other mRNAs in gastric cancer using TCGA data. The 300 genes most positively associated with PAFAH1B3 were selected for enrichment analysis, and the top 50 genes were displayed in a heatmap (Figure 3). We further explored potential functional pathways based on the top 300 genes using the R software clusterProfiler package. GO functional enrichment analysis revealed that PAFAH1B3 was associated mainly with cell proliferation-related pathways including DNA replication and cell cycle checkpoints (Figures 4A–C). Gene set enrichment analysis was conducted to search the Kyoto Encyclopedia of Genes and Genomes (KEGG) and Reactome pathway databases. The KEGG analysis results showed that spliceosome, ribosome, and cell cycle terms were significantly enriched (Figure 4D). The Reactome analysis revealed significant enrichment of cell cycle, M phase, and DNA repair pathways (Figure 4E). These results suggest that high PAFAH1B3 expression is associated with the hyperactivation of multiple oncogenic pathways in gastric cancer, especially signalings which control cell proliferation. 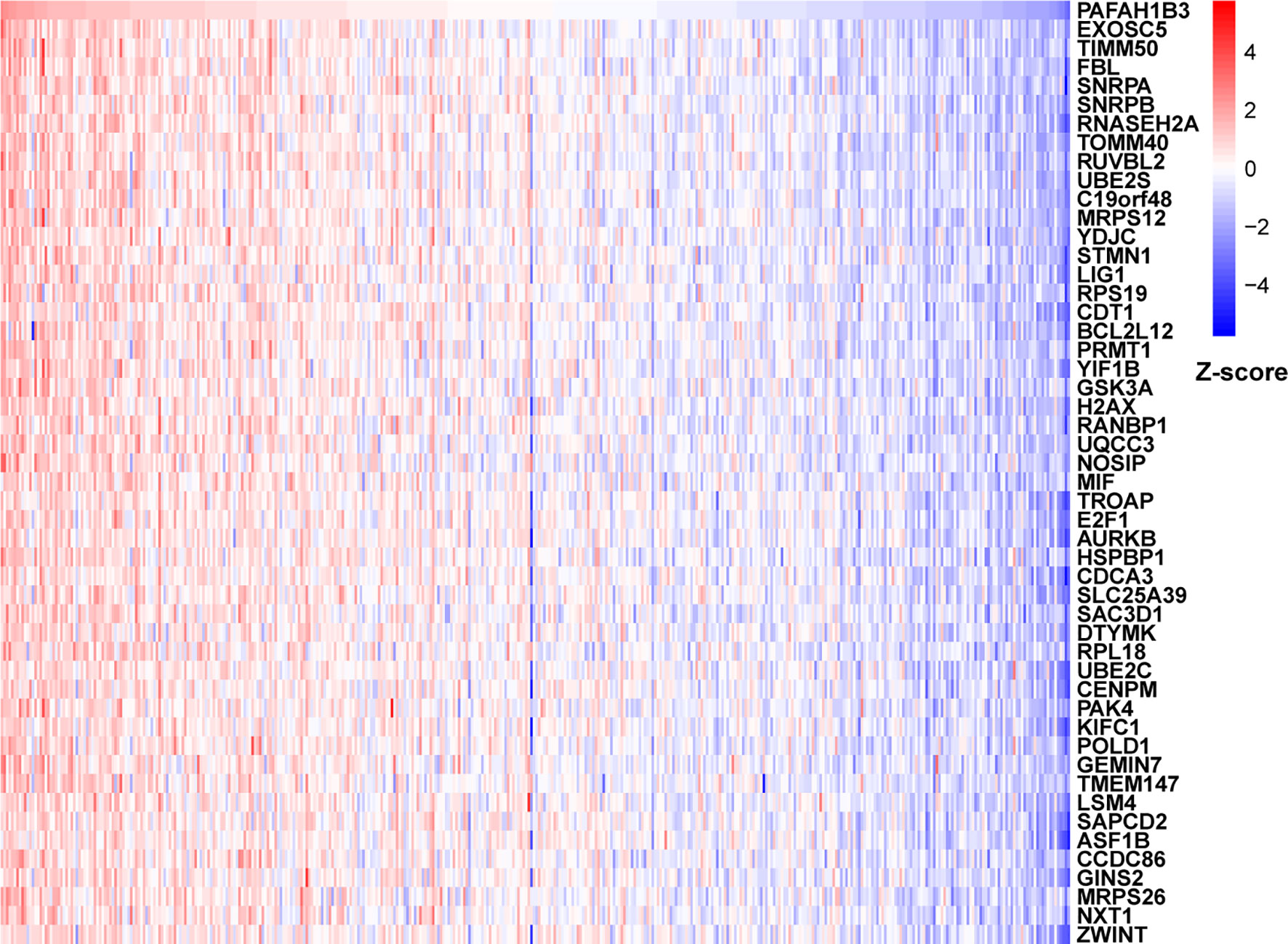 Figure 3 The correlation analysis of PAFAH1B3. Top 50 genes most positively associated with PAFAH1B3 were shown in heatmap. Data were normalized by Z-score standardization method. 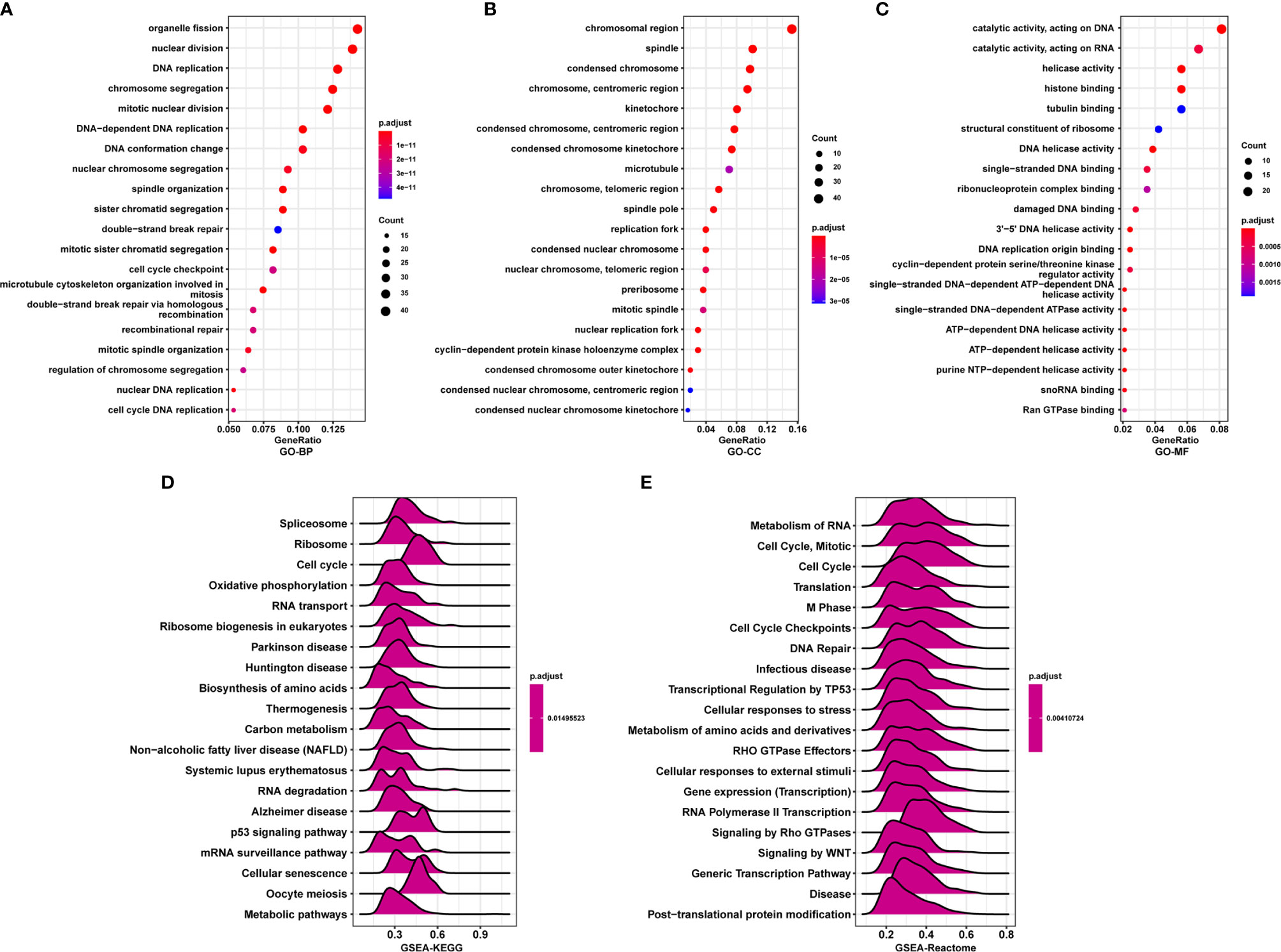 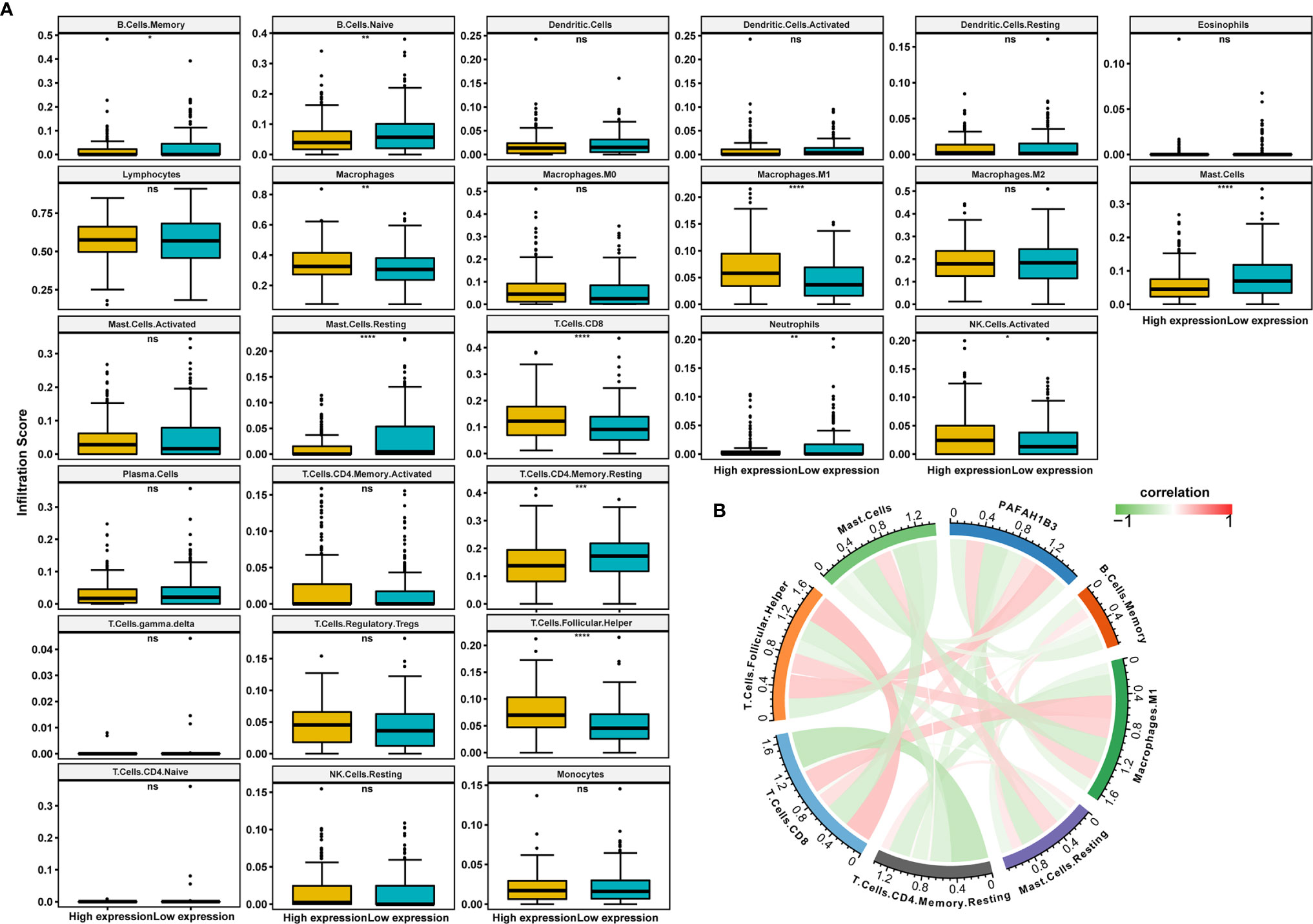 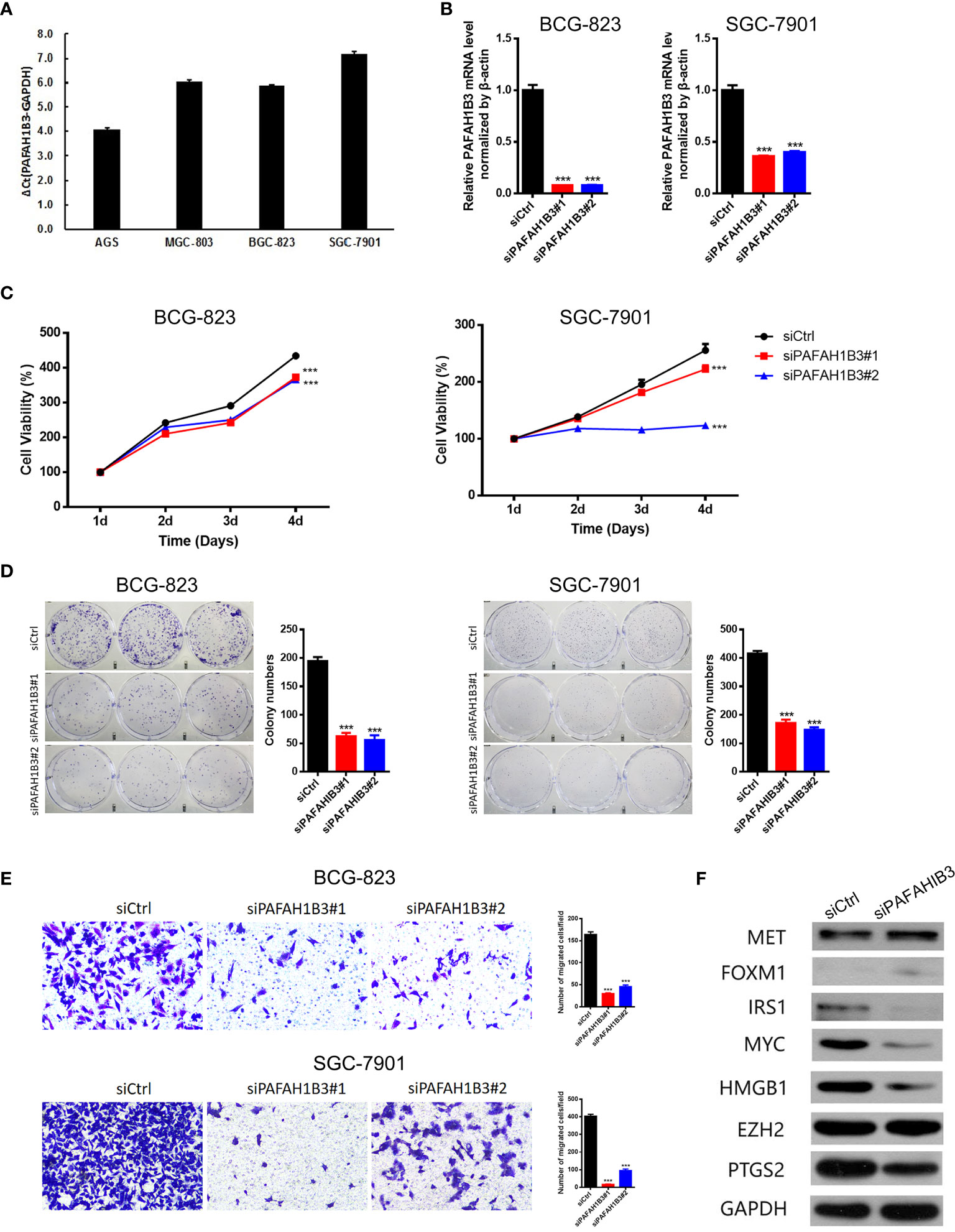 Figure 6 Knockdown of PAFAH1B3 inhibited the proliferation and migration of gastric cancer cells. (A) The level of PAFAH1B3 was evaluated in various gastric cancer cell lines by qRT-PCR. (B) BCG-823 and SGC-7901 cells were transfected with si-PAFAH1B3, the level of PAFAH1B3 was evaluated by qRT-PCR. (C, D) The proliferation of gastric cells (GC) was examined by CCK-8 assay (C) and colony-formation assay. (E) The migration of GC cells was examined by transwell assay. (F) The expression levels of indicated proteins were evaluated by Western blot in control and PAFAH1B3-silenced BCG-823 cells. Data were shown as mean ± SD. ***p < 0.001.

In recent years, PAFAH1B3 was reported to play regulatory roles in various kinds of diseases, including human cancers. For example, in hypopharyngeal squamous cell carcinoma (HSCC), the expression of PAFAH1B3 was reported to be upregulated and was correlated with poor patient prognosis. Silencing PAFAH1B3 expression restricted the proliferation, invasion, and migration of HSCC cells (4). Metabolomic study indicated that inhibition of PAFAH1B3 suppressed the growth of breast cancer by upregulating the levels of anti-tumor lipids, such as ceramides and several PPARα ligands, indicating that PAFAH1B3 serves as a metabolic oncogene in breast cancer (10). Similarly, selective small-molecule PAFAH1b3 inhibitors impaired the growth of neuroblastoma cells, suggesting that PAFAH1b3 might become a targetable oncoprotein (5). Nevertheless, the expression pattern of PAFAH1B3 in various human cancers and its prognostic values are still elusive. Here, by data mining using TCGA datasets, the hyperexpression of PAFAH1B3 was observed in 24 types of tumor tissues compared with normal tissues, suggesting that PAFAH1B3 might serve as a novel oncogene in these tumor types.

In summary, PAFAH1B3 may play a pathogenic role in gastric cancer progression, both acting on tumor cells or on tumor-infiltrating immune cells.

LC and XW designed the research. TX, DW, and SL performed the research and collected the data. XG and YL analyzed the data. TX drafted the manuscript. All authors contributed to the article and approved the submitted version.

Copyright © 2021 Xie, Guo, Wu, Li, Lu, Wang and Chen. This is an open-access article distributed under the terms of the Creative Commons Attribution License (CC BY). The use, distribution or reproduction in other forums is permitted, provided the original author(s) and the copyright owner(s) are credited and that the original publication in this journal is cited, in accordance with accepted academic practice. No use, distribution or reproduction is permitted which does not comply with these terms.