This study was to assess the prognosis stratification of the clinical-pathologic staging system incorporating estrogen receptor (ER)-negative disease, the nuclear grade 3 tumor pathology (CPS + EG), Neo-Bioscore, and a modified Neo-Bioscore system in breast cancer patients after preoperative systemic therapy (PST). A retrospective multicenter cohort study was conducted from 12 participating hospitals’ databases from 2006 to 2015. Five-year disease free survival (DFS), disease specific survival (DSS), and overall survival (OS) were calculated using Kaplan–Meier Method. Area under the curve (AUC) of the three staging systems was compared. Wald test and maximum likelihood estimates in Cox proportional hazards model were used for multivariate analysis. A total of 1,077 patients were enrolled. The CPS + EG, Neo-Bioscore, and modified Neo-Bioscore could all stratify the DFS, DSS, and OS (all P < 0.001). While in the same stratum of Neo-Bioscore scores 2 and 3, the HER2-positive patients without trastuzumab therapy had much poorer DSS (P = 0.013 and P values < 0.01, respectively) as compared to HER2-positive patients with trastuzumab therapy and HER2-negative patients. Only the modified Neo-Bioscore had a significantly higher stratification of 5-year DSS than PS (AUC 0.79 vs. 0.65, P = 0.03). So, the modified Neo-Bioscore could circumvent the limitation of CPS + EG or Neo-Bioscore.

Assessment of breast cancer prognosis is critical for clinicians to make therapeutic decision. Previous studies demonstrated that the same chemotherapy regimen used as preoperative systemic therapy (PST) or adjuvant therapy in individual studies did not significantly improve prognosis of the patients’ survival (1, 2). However, pooled analysis showed that patients who achieved a pathological complete response (pCR), defined as the histologically absence of invasive cancer cells in the breast and axillary nodes (ypT0/is ypN0), significantly had superior disease free survival (DFS) after PST, as compared with patients who had residual disease (3). These studies indicated that patient’s responses to PST can predict the disease outcomes, and the residual cancer burden (RCB) can be used to stratify the prognosis of patients after PST (4). On the other hand, most of the patients with hormone receptor (HR)-positive, human epidermal growth factor receptor 2 (HER2)-negative subtypes still had a favorable prognosis although they achieved a low pCR rate (5–7). As demonstrated from recent meta-analysis, pCR was a less strong prognostic factor in luminal type breast cancers, and the prognosis of non-pCR patients varied a lot (3, 8). These studies suggest that the prediction, based primarily on final pathologic assessment of post-treatment cancer residues in the breast and axilla, is not reliable, and a better prognostic approach that integrates biologic markers into clinical and pathological staging systems is needed to improve the prediction of non-pCR patients and some of pCR patients as well for development of therapeutic strategy for postoperative treatments.

Here, we conducted a retrospective multicenter cohort study in patients with primary invasive breast cancers who underwent PST and surgery. Our objective of this study was to validate CPS + EG and Neo-Bioscore system and determine the accuracy of prediction of not only DSS, but also DFS and overall survival (OS). We also developed a modified Neo-Bioscore system to stratify the prognosis after PST in more detail.

The study was approved by the central ethics committee at the Peking University First Hospital. All breast cancer patients who met the inclusion criteria were recruited from participating hospitals’ databases from 2006 to 2015. The detailed protocol was published elsewhere (19). The data was recorded by professional clinicians and double-checked by independent research staff for accuracy. The retrospective data was retrieved from the hospitalization and follow-up patient databases from multiple institutes or hospitals.

All patients received the first-line of taxanes (T)- and/or anthraclines (A)-based neoadjuvant regimen and other interventions as standard procedures, as described previously (19). 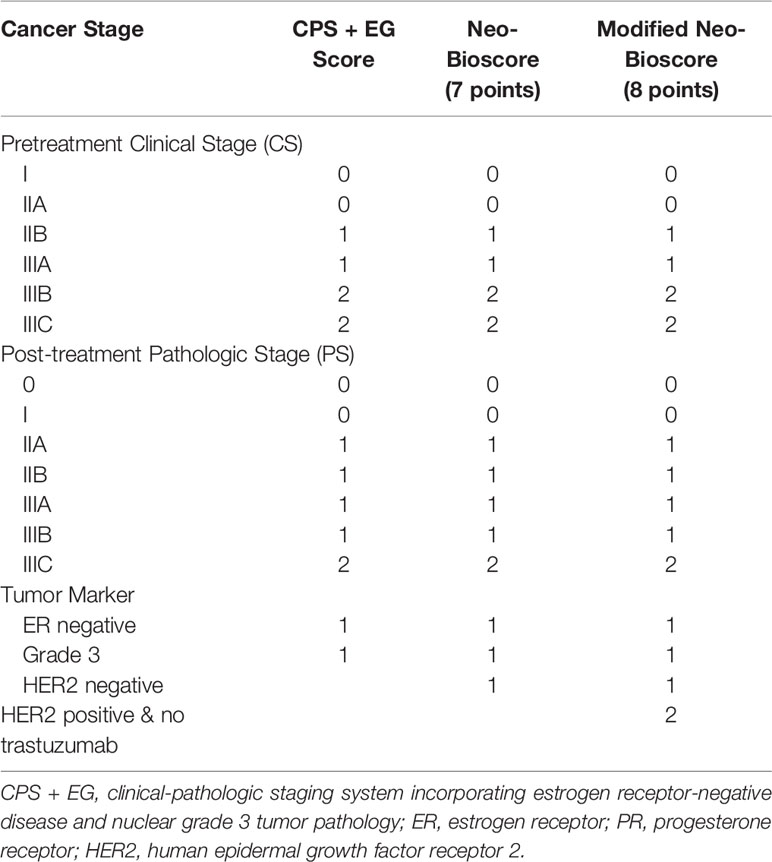 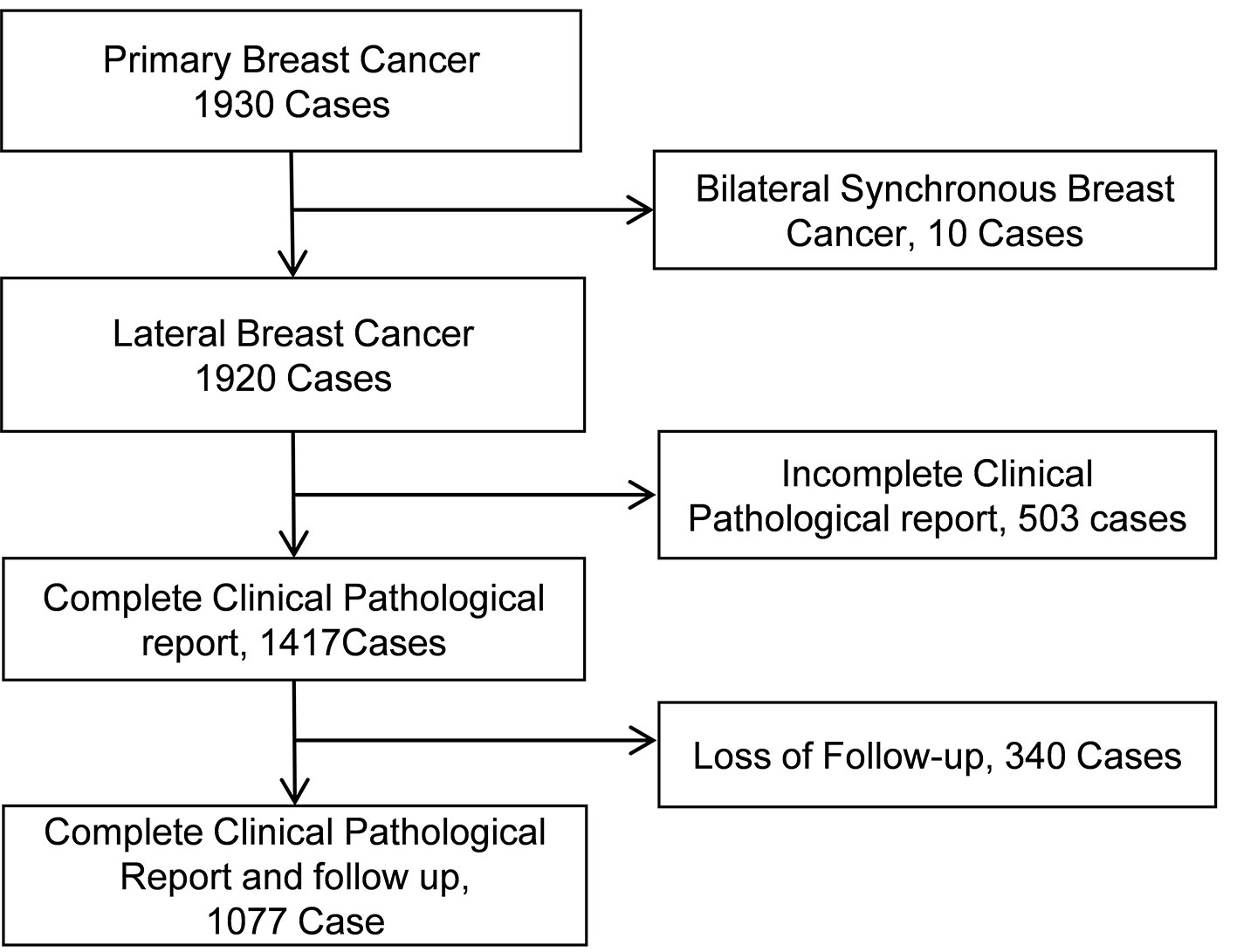 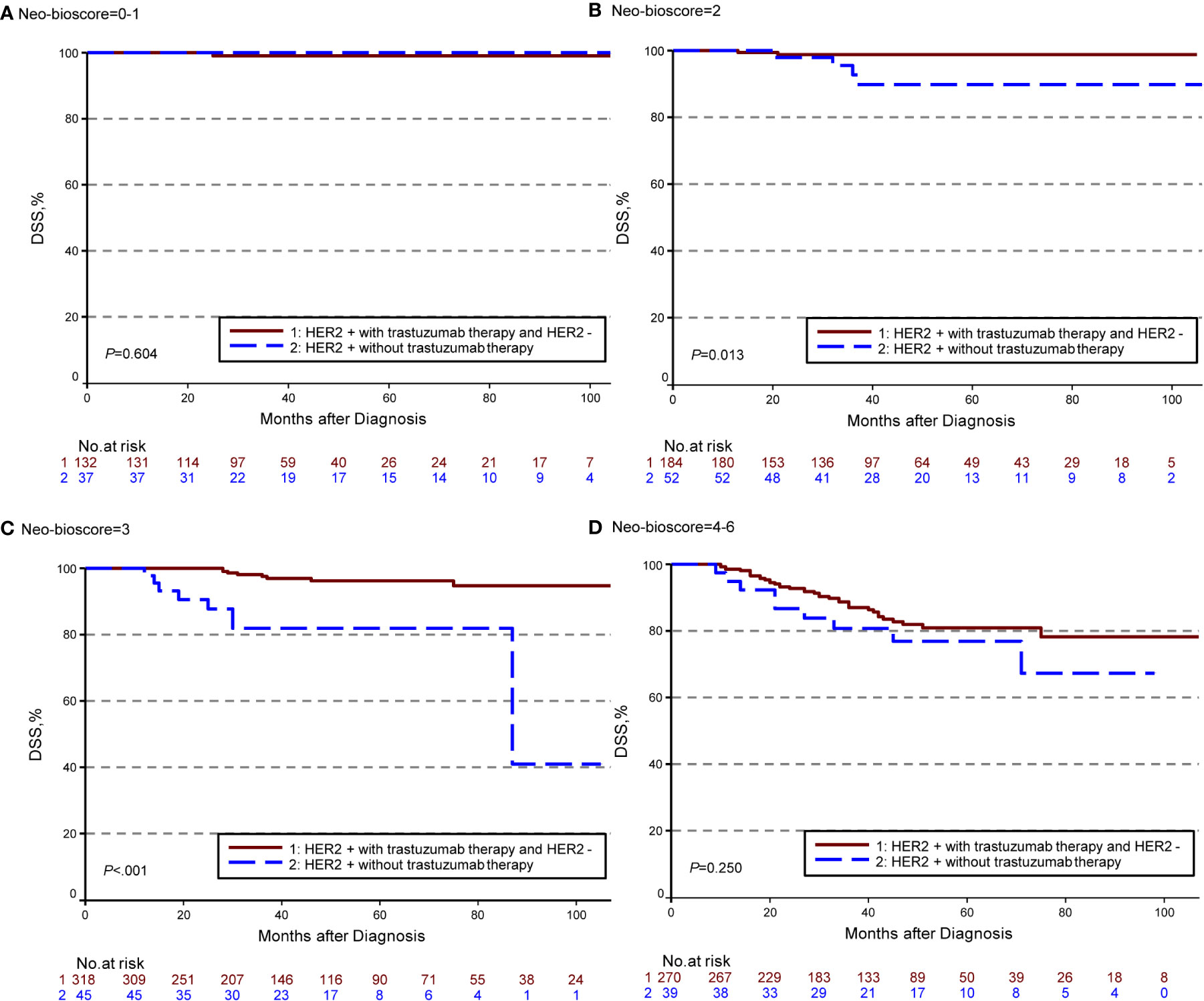 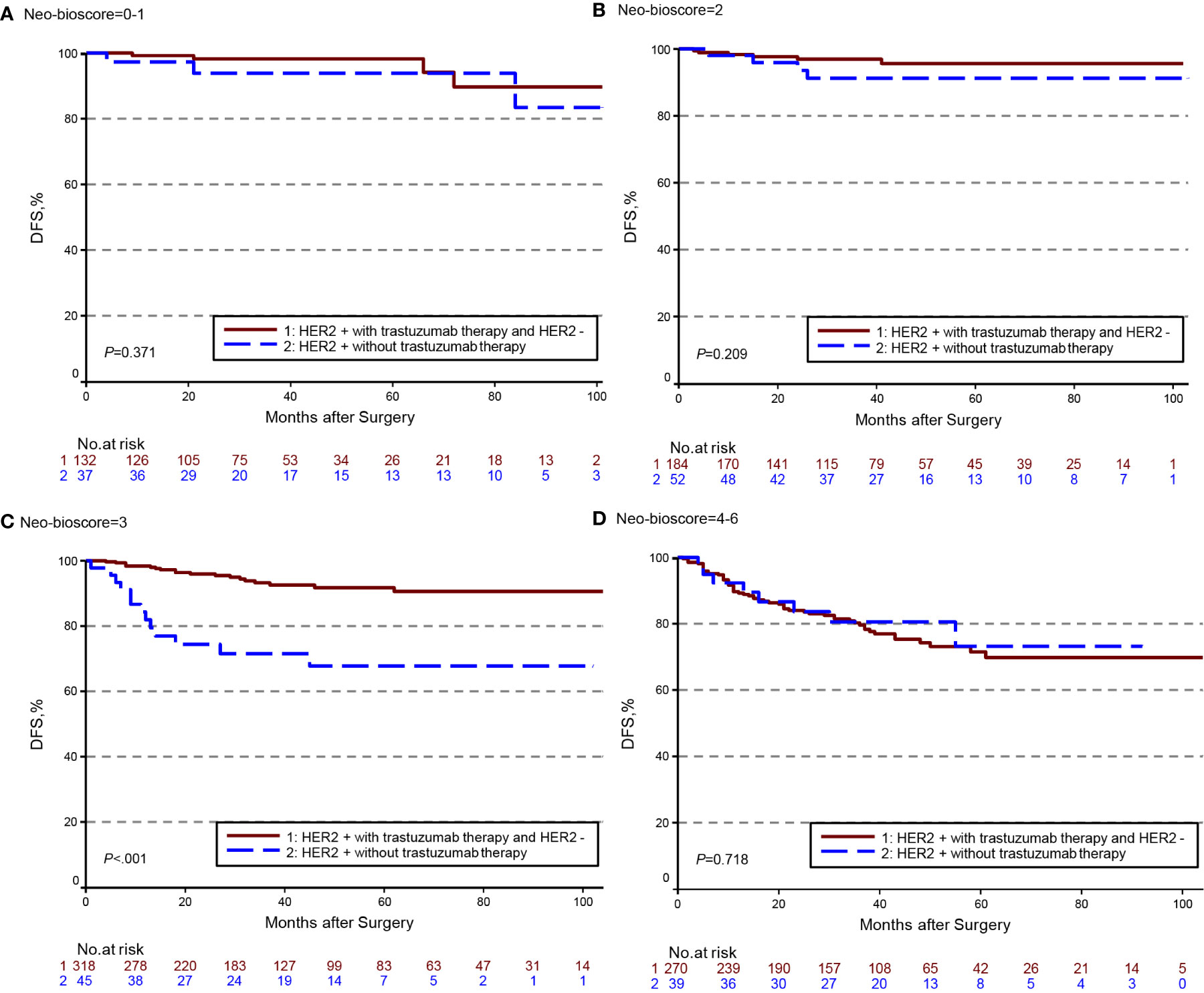 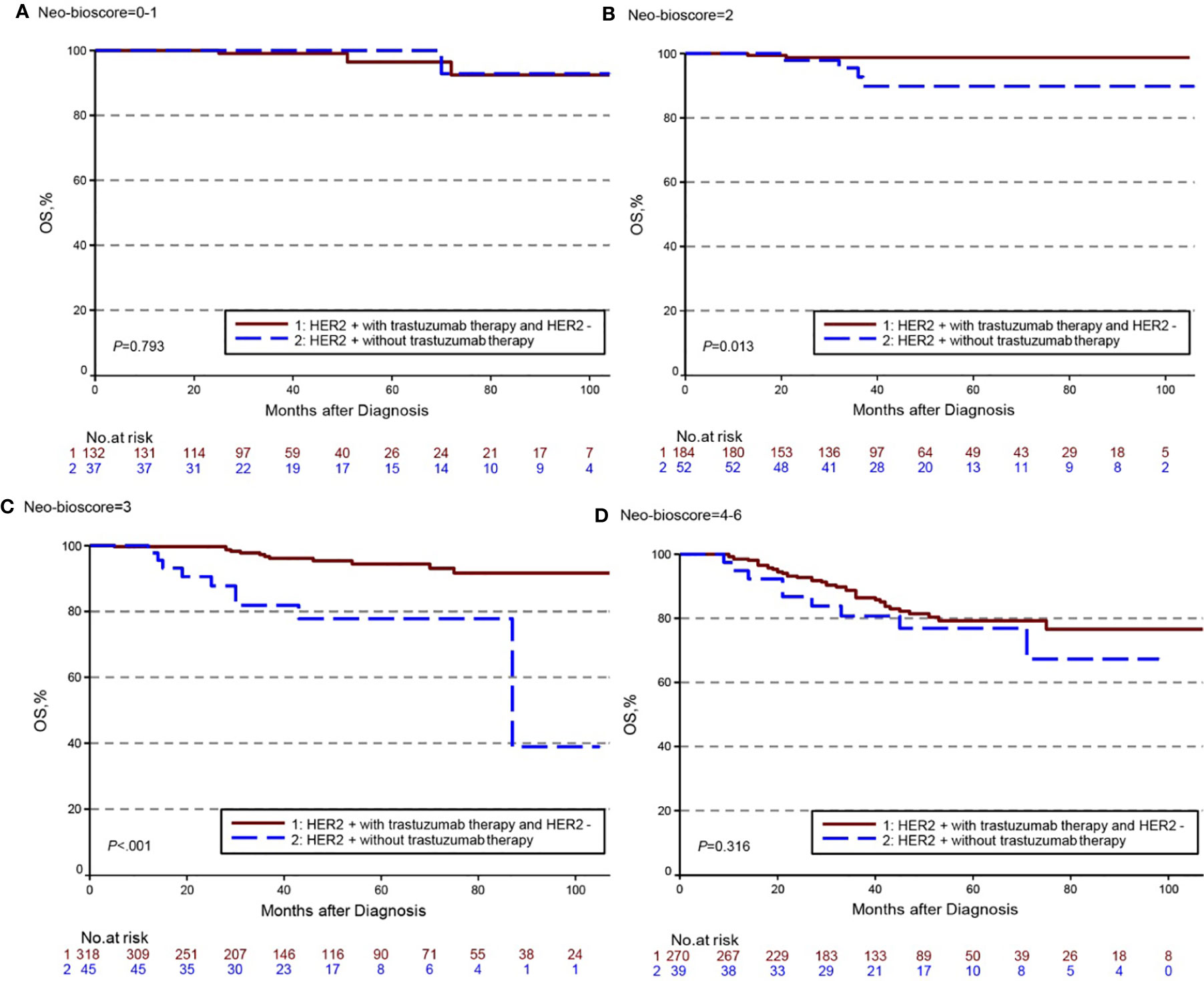 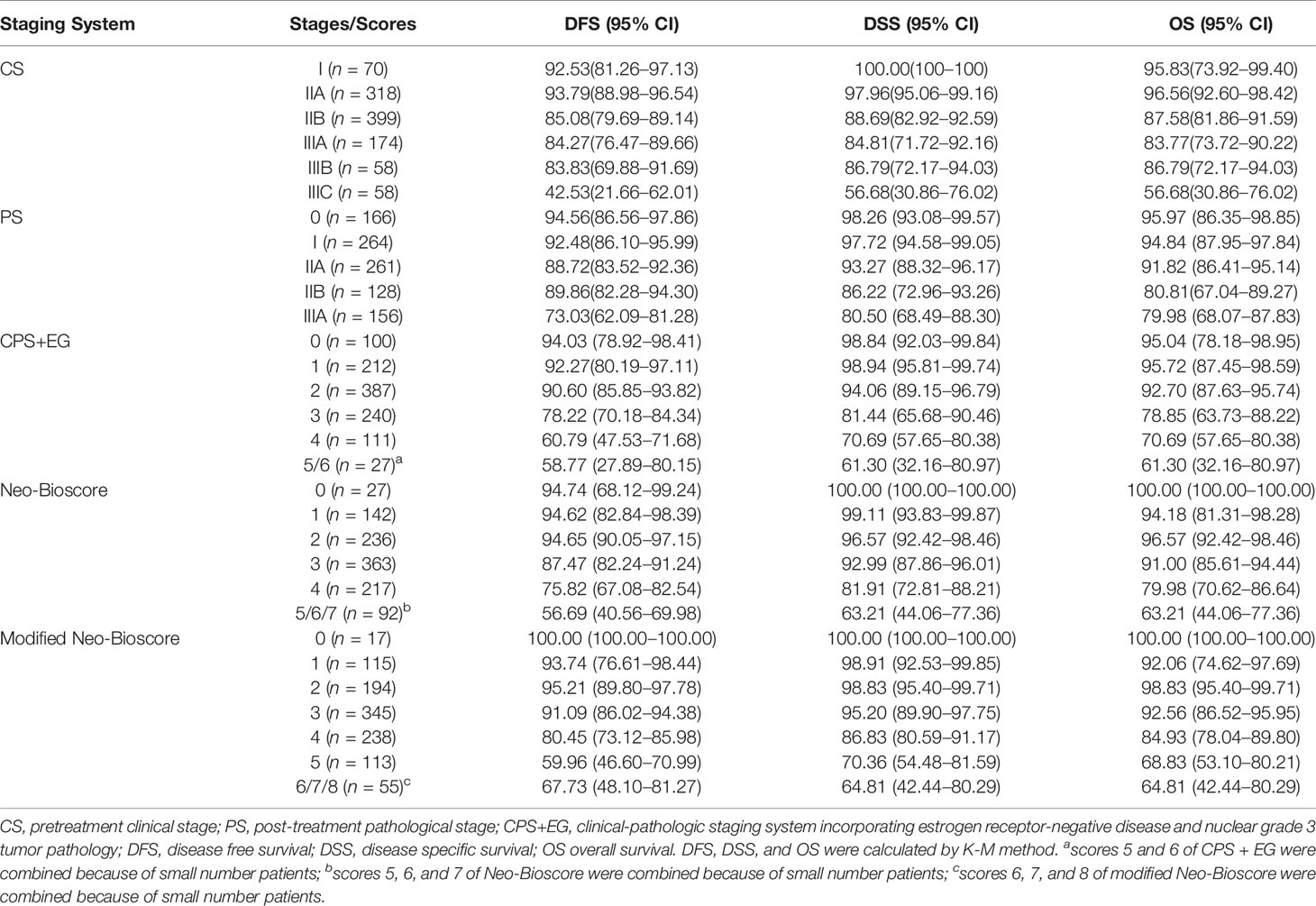 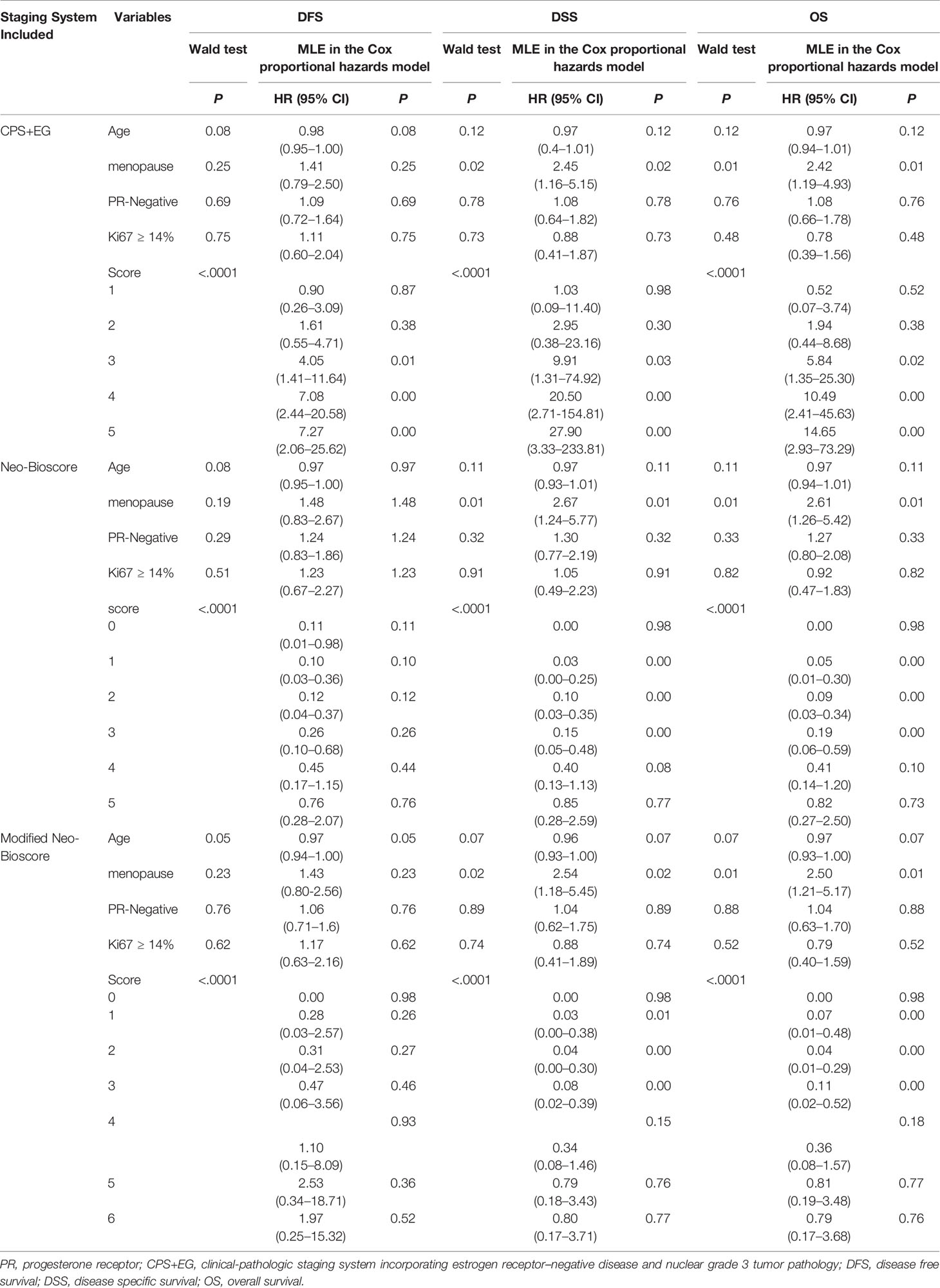 The AJCC published the eighth edition Cancer Staging Manual, and included the traditional anatomic stage groups and the prognostic stage groups which incorporated biomarkers such as ER, PR, HER2 status, and tumor histological grade (17). Both CPS + EG and Neo-Bioscore staging systems are better than the previous CS and PS, which conform to the same point as the AJCC eighth edition that they also take the biomarkers into consideration.

In our previous studies, we demonstrated that both CPS + EG and Neo-Bioscore could predict the disease outcomes well; but they still have obvious limitations (21). The CPS + EG score was developed before the routine test of HER2 status and the use of HER2-targeted therapy. To overcome this limitation, the Neo-Bioscore was developed, which incorporates HER2 status into the CPS + EG. Neo-Bioscore hypothesized that all HER2-positive patients have received anti-HER2 treatment. However, the treatment regimens the patients actually received are not ideal and could have a profound impact on the prognosis (22). For example, HER2 positive could be considered either as a favorable factor if the patients were treated with anti-HER2 treatment, or as a poor prognostic factor if the HER2-positive patients were treated in the absence of trastuzumab therapy (23–25). It is considered in the eighth edition of the AJCC that the prognostic value of these Prognostic Stage Groups relies on populations of patients with breast cancer that have been offered and mostly treated with appropriate endocrine and/or systemic chemotherapy and/or routine use of trastuzumab (17). Data from our hospital breast disease center also showed that the prognostic outcomes (DFS, OS) of the stage I HER2-positive patients was worse than those of the stage II because higher proportion of patients with stage II were treated with trastuzumab than patients with stage I (26).

In fact, insufficient anti-HER2 treatment is common. In this study, we found that of 1,077 patients enrolled from our multicenter approximately 29% (315/1077) of breast patients were HER2-positive; only 45% of them (142/315, HER2+) received trastuzumab, and more than half of HER2-positive cases (173/315, HER2+) were treated in the absence of anti-HER2 treatment. In other countries, patients’ with HER2-positive cancer access to trastuzumab therapy was also limited (27–29). In the United States, for example, a retrospective study that enrolled 915 HER2-positive cases reported that 28% of the HER2-positive patients did not receive anti-HER2 therapy initially (30). Another study reported approximately 41% of 585 American women discontinued trastuzumab therapy mostly because of side effects (31). Early trastuzumab discontinuation was thought to be a powerful independent predictor of cardiac events and clinically significant relapse, and both might contribute to poor survival (31, 32). Thus, the number of HER2-positive patients who do not receive trastuzumab still remains substantial.

In this study, we developed a modified staging system by assigning HER2-positive without trastuzumab administration as a poorer prognostic factor and gave two points in the modified Neo-Bioscore staging system. We demonstrated that modified Neo-Bioscore had a significant improvement of five-year DSS AUC as compared to PS scoring system (0.79 vs 0.73, P < 0.05), whereas neither CPS + EG (0.78 vs 0.73, P = 0.1) nor Neo-Bioscore staging system (0.76 vs 0.73, P = 0.39) had a significant better prediction of five-year DSS. A possible explanation of failure of the CPS + EG and the Neo-Bioscore prediction is that the characteristics of breast cancer cases in China (e.g. age and menopausal status) and the HER2-positive patients without trastuzumab therapy compromised the extent of survival stratification (34). The improvement in the prognosis of breast cancer patients was small; however, we anticipate it may show greater improvement in the predictive value of this novel, modified Neo-Bioscore scoring system once a larger cohort is enrolled in the study.

The strength of this study was the use of data quality control strategies that are common in the performance of multicenter clinical trials. The study devoted significant attention to data quality at multiple stages, including case ascertainment, data extraction, and data management. However, the study has some limitations which are common in a retrospective design. Higher score groups were ended up with few cases so that the advanced scores were combined for statistical analyses, and a larger cohort study is needed to confirm the finding in future.

We performed a large-scale, multicenter retrospective study and analyzed 1,077 breast cancer patients to validate CPS + EG, Neo-Bioscore, and modified Neo-Bioscore staging systems after PST. We found patients in the absence of trastuzumab therapy had much poorer survival prognosis in the same stratum of Neo-Bioscore scores 2 and 3 as compared to HER2-positive cases with trastuzumab therapy and HER2-negative patients. The modified Neo-Bioscore could circumvent the limitation of CPS + EG or Neo-Bioscore and had a significant improvement of five-year DSS prediction as compared to PS due to mixed trastuzumab therapy in clinical practice. The menopausal status was an independent prognostic factor. Thus, whether menopausal status should be incorporated into the staging system need to be studied and validated with larger samples. Furthermore, it will be our future study to see if other unfavorable prognostic factors, such as insufficient treatment, are incorporated into existing staging system with TNM and biological characteristics, the staging system would have a broader clinical implication in the real world.

The original contributions presented in the study are included in the article/supplementary material; further inquiries can be directed to the corresponding authors.

The studies involving human participants were reviewed and approved by the Peking University First Hospital Biomedical Research Ethics Committee. Written informed consent for participation was not required for this study in accordance with the national legislation and the institutional requirements.

The reviewer YX declared a shared affiliation, with no collaboration, with several of the authors (LX, YL, SW, SW, QX, ZZ, QL, BZ, ZL, CM, XD, YC) to the handling editor at the time of the review.

Copyright © 2021 Xu, Liu, Fan, Jiang, Liu, Ling, Zhang, Yu, Jin, Wang, Cui, Wang, Mao, Han, Wang, Zhang, Wang, Guo, Yu, Xu, Fu, Liu, Wang, Luo, Xiang, Zhang, Liu, Zhou, Liu, Ma, Tong, Mao, Duan and Cui. This is an open-access article distributed under the terms of the Creative Commons Attribution License (CC BY). The use, distribution or reproduction in other forums is permitted, provided the original author(s) and the copyright owner(s) are credited and that the original publication in this journal is cited, in accordance with accepted academic practice. No use, distribution or reproduction is permitted which does not comply with these terms.