Case Presentation: We report a case of a 62-year-old man diagnosed with ROS1-rearranged metastatic lung adenocarcinoma, who received first-line treatment with crizotinib for 19 months. During the course of disease, the primary lung tumor was under control while the brain metastasis progressed despite the treatment with lorlatinib. The biopsy and genetic tests of the metastatic brain tumor showed a high level of MET amplification (32 copies). However, fluorescence in situ hybridization of the primary cancer showed no MET amplification, suggesting that MET amplification may be associated with an acquired resistance to ROS1-TKIs.

Summary: This case suggested that MET amplification could be explored as a potential mechanism for developing ROS1-TKIs resistance. Combination treatment with highly potent and selective MET-TKIs warrants further investigations.

C-ros oncogene 1 (ROS1) has been identified as an oncogenic driver in 1–2% of non-small cell lung cancer (NSCLC) (1). Patients with ROS1-rearranged lung cancer significantly benefit from treatment with ROS1 tyrosine kinase inhibitors (TKIs) (2), such as crizotinib, with an overall response rate (ORR) of 72% and a progression free survival (PFS) of approximately 19.3 months (3). However, following initial positive responses to crizotinib, a large number of patients with ROS1-rearranged NSCLC experience progression of disease due to the occurrence of resistance. The most common mechanism of acquired resistance to TKIs is secondary mutation of the ROS1 kinase domain, such as G2032R, L2155S, and S1986F/Y, which decreases the potency of kinase inhibition. Furthermore, the activation of bypass signaling pathways, including EGFR, KIT, and MAPK, have been identified as another mechanism of resistance in ROS1-rearranged cancers and accounts for about 45% of the crizotinib-resistance ROS1-rearranged NSCLC (4, 5). The treatment options, including switching drugs and combination therapies, can vary based on the different underlying mechanisms.

In this study, we reported a case wherein a high level of MMNG HOS Transforming gene (MET) amplification was found at the time of progression, as a potential mechanism for ROS1-TKIs resistance in NSCLC.

A 62-year-old male nonsmoker presented at our hospital in January 2018. He complained of a one-month history of right chest and back discomfort with no noted triggers. Imaging examinations showed a 2.3 cm mass in his right middle lobe, with metastasis in the right hilar and mediastinal lymph nodes as well as left ilium. A solitary brain metastasis in the left frontal lobe was also noted in magnetic resonance imaging (MRI). Pulmonary biopsy revealed lung adenocarcinoma stage IV (T1cN2M1c). Immunohistochemistry (IHC) results of the tumor tissue were positive for ROS1 and PD-L1 (> 90%) but negative for anaplastic lymphoma kinase (ALK) (Figure 1). ROS1 rearrangement was then confirmed by fluorescence in situ hybridization (FISH) (Figure 1).

Figure 1 Comparison of findings from biopsy of the primary lung tumor and metastatic brain tumor. Hematoxylin and eosin staining (HE ×40) of the primary lung adenocarcinoma was positive for ROS1 and PD-L1 (> 90%) by immunohistochemical (IHC ×40). The metastatic brain tumor showed poorly differentiated carcinoma by HE, which was partly positive for ROS1 and PD-L1 (40%) by IHC. ROS1 rearrangement was confirmed by FISH (>15% of the cells demonstrate split or single 3′ signals).

The patient was given first-line treatment with crizotinib 250mg twice daily from February 2018. This achieved a partial response with good tolerance. Six months later, he felt dizzy, right lower extremity weakness, and unsteadiness. Imaging showed a controlled primary lung lesion but a progressing brain lesion. Therefore, the patient continued to receive crizotinib and underwent concurrent gamma knife radiosurgery for the intracranial lesion. Six cycles of combination therapy with crizotinib and bevacizumab were initiated in March 2019. Approximately 19 months after crizotinib treatment was initiated, he reported dizziness and progressive weakness of his right lower limb. MRI confirmed disease progression and significant edema in the brain in October. A computed tomography (CT) scan of the chest showed the primary lesion still under control. The patient then received lorlatinib 75mg once daily, but his symptoms were not relieved. Instead, his dizziness and the muscular weakness in both lower extremities worsened. New symptoms, such as headache, convulsions, sluggishness, and unresponsiveness developed. A repeated brain-MRI showed rapid brain tumor progression, severe brain edema, and cerebral midline deviation (Figure 2). Then, an emergency brain metastasis surgery was performed, and the pathological tests demonstrated the presence of adenocarcinoma from lung cancer. The specimen was further analyzed via next-generation sequencing (NGS; FoundationOne CDx). Unfortunately, the patient succumbed to the intracranial hypertension and cerebral hernia before the NGS report, which showed a high level of MET amplification (32 copies). FISH demonstrated a cluster of MET signals congruent with the NGS result (Figure 3). To investigate whether MET amplification was acquired after TKI treatment, the primary lung lesion was reanalyzed by FISH, and the result was negative for MET amplification (Figure 3). 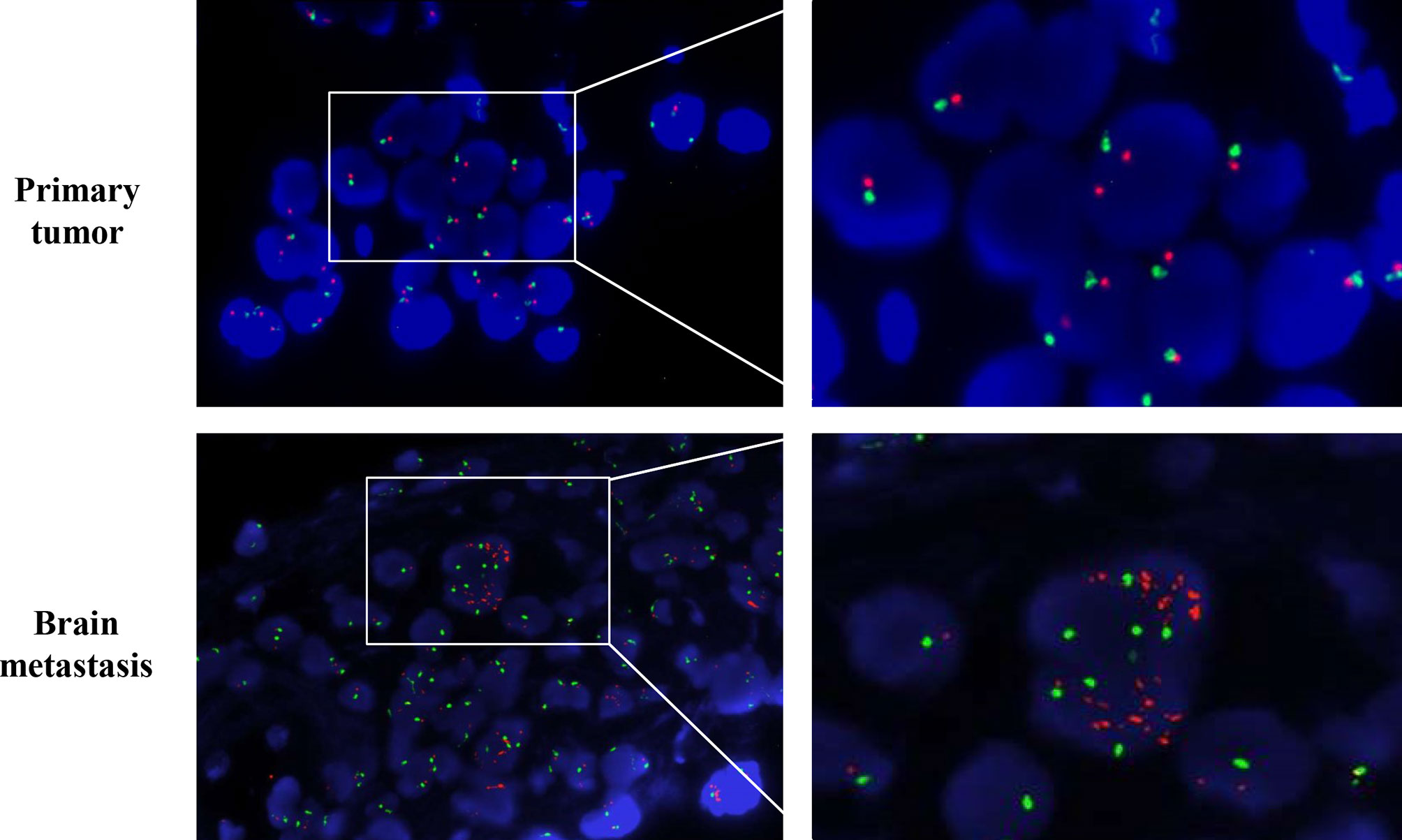 MET amplification activates a bypass signaling pathway that is responsible for resistance to EGFR and ALK TKIs (6, 7). However, its role in ROS1-TKIs has never been reported. To our knowledge, this is the first report suggesting MET amplification can serve as a mechanism for acquired resistance to ROS1-TKIs. In the present case, the results of pathological analysis confirmed the acquisition of MET amplification after crizotinib therapy using NGS and FISH. The immediate post-crizotinib brain tumor specimen showed a high level of MET amplification (32 copies) in contrast to the MET-negative pre-crizotinib primary lung tumor. Combining the patient’s initial response to crizotinib and subsequent disease progression facts, speculation arises that MET amplification contributed to acquired ROS1-TKI resistance. In addition, the rapid growth of the tumor within a month post-lorlatinib indicated that high-level MET amplification is a potentially potent oncogenic driver. However, the patient was not able to receive treatment with selective MET inhibitors to validate and overcome this resistance mechanism.

Crizotinib, a multitargeted ALK/ROS1/MET inhibitor, was the first TKI approved by the FDA for the treatment of ROS1-rearranged advanced NSCLC in 2016 (8). It inhibits ATP-dependent cellular functions by binding to the respective protein kinase domains, leading to potent ALK, ROS1, and MET suppression and generating positive clinical effects (9). The observations of several cases indicated that NSCLC patients with MET amplification could benefit from crizotinib (10–12). A previous report described two patients with high-level MET amplification NSCLC (MET/CEP7 ratio≥5) responding to crizotinib in the absence of detectable exon 14 alterations (10). A recent case reported that MET D1228N mutation might be a mechanism of resistance to crizotinib in ROS1 fusion NSCLC (13). The resistances to ROS1-TKIs of both cases may have been due to variations of MET, but via different mechanisms: MET secondary mutation and MET amplification. Further studies are needed to confirm these finding.

In previous studies, patients harboring acquired MET amplifications after disease progression benefited from combination therapy that targeted both the primary driver and MET gene (21). A phase Ib/II study found that the efficacy of combination therapy (capmatinib and gefitinib) increased along with the MET copy number for patients with EGFR-mutated, MET-amplified NSCLC (22). This suggested that the likelihood of benefiting from MET-TKIs rises as the level of MET amplification increases. Therefore, combination therapy with more potent selective MET-TKIs should be considered. In addition, the primary lung tumor and brain metastasis tumor were both positive for PD-L1 (greater than 90% and 40%, respectively), suggesting that the patient may benefit from a combination of immunotherapy and target therapy. Furthermore, the variation of the PD-L1 and MET during the disease progression revealed the highly heterogeneous character of the patient’s cancer. Therefore, repeated genetic testing during the treatment is crucial.

In summary, this case suggested that MET amplification may be an important mechanism for acquired resistance to ROS1-TKIs. The combination of crizotinib and a more potent MET inhibitor should be investigated post-crizotinib progression in ROS1-rearranged NSCLC patients who harbored acquired MET amplification.

JY: collected the clinical data and wrote/edited the final manuscript. PZ: analyzed and interpreted the histological examination, immunohistochemistry stains, and fluorescence in situ hybridization. MY: patient care and case presentation. YZ: conceptualization, writing-review and editing. All authors contributed to the article and approved the submitted version.

The authors acknowledge financial supports from the 1·3·5 project for disciplines of excellence–Clinical Research Incubation Project, West China Hospital, Sichuan University (Grant No. 2019HXFH062), and from the National Natural Science Foundation of China (Grant No. 81402561).

Copyright © 2021 Yang, Zhou, Yu and Zhang. This is an open-access article distributed under the terms of the Creative Commons Attribution License (CC BY). The use, distribution or reproduction in other forums is permitted, provided the original author(s) and the copyright owner(s) are credited and that the original publication in this journal is cited, in accordance with accepted academic practice. No use, distribution or reproduction is permitted which does not comply with these terms.