Department of Internal Medicine, College of Medicine, University of Ulsan, Republic of Korea

Jae Myung Park9 on behalf of Korean College of Helicobacter

Background: Treatment recommendations for gastric mucosa-associated lymphoid tissue (MALT) lymphoma are based on case series and expert opinions. Only a few previous studies have focused on the long-term outcomes of gastric MALT lymphoma, especially according to stage.

Results: A total of 1,163 patients was enrolled, and 97.6% (n=1,038) of patients were diagnosed as stage IE. 10-year overall survival (OS) for the entire population was 99.1% and was better for patients in stage IE compared with patients in stage III/IV (p=0.002). The 10-year OS for H. pylori-positive patients was better than that of H. pylori-negative patients (p=0.022). Multivariate analyses revealed initial stage III/IV as a prognostic factor associated with over-all survival.

Patients diagnosed with gastric MALT lymphoma from January 2000 to December 2018, at nine university hospitals in Korea were enrolled. Medical records were reviewed retrospectively, and patients were excluded for any of the following conditions: synchronous cancer in another organ, no endoscopic follow-up, and/or incomplete medical records. The clinical data included medical history, endoscopic features, histological diagnosis, results of H. pylori testing, stage, treatment, and outcomes. The pathology reports were reviewed by an expert pathologist at each hospital, and the histological diagnosis was made according to the WHO Classification (20). The present study was conducted in accordance with the ethical guidelines of the Declaration of Helsinki and approved by the institutional review board of all participating hospitals.

Initial gastric MALT lymphoma diagnosis was based on endoscopic examination and histologic assessment of biopsy specimens. Gastric MALT lymphoma was diagnosed histologically by the presence of a diffuse infiltrate of centrocyte-like B cells in the lamina propria with prominent lymphoepithelial lesions formed by invasion of individual glands by aggregates of lymphoma cells under histologic examination (21). Location of the dominant lesion was grouped into the upper, middle, or lower third of the stomach, and clinical stage was determined using the modified Ann Arbor staging system (22). The staging work-up included physical examination, computed tomography (CT) scans of the chest and abdomen, and biopsies. Endoscopic ultrasound sonography (EUS), bone marrow aspiration, and chromosomal translocation t(11;18)(q21;q21) were assessed by the physician.

H. pylori infection status was determined by histology, rapid urease test, or urea breath test, and H. pylori infection was regarded as positive when at least one of these tests yielded positive results. Eradication regimens consisted of standard triple therapy, sequential therapy, concomitant therapy, bismuth quadruple therapy, or levofloxacin-based triple therapy. The specific medication and dose for each regimen have been reported elsewhere (23). The outcomes of eradication therapy were determined using a urea breath test or a rapid urease test performed at least 4 weeks after completion of antibiotic therapy.

The primary aim of this study was to examine the 10-year overall survival (OS) of gastric MALT lymphoma patients. We also examined the 10-year OS by stage, H. pylori infection status, and treatment. Clinical factors associated with OS also were assessed. OS was defined as the interval between the date of diagnosis and the final date of follow up and was censored at that date. We also calculated the median follow-up as the median time between diagnosis to the time the last subject has an event or is censored.

The baseline patient characteristics are summarized using descriptive statistics. The continuous data are presented as mean (standard deviation) or median (interquartile range) and categorical data as quantity and proportion. Comparison of categorical variables was performed using the χ2 test or Fisher’s exact test. The OS rates were calculated as the median time to censoring or death using Kaplan-Meier (KM) analysis and were compared using log-rank tests. The Cox proportional hazards model was applied to perform univariate and multivariate analyses to identify risk factors for mortality. Clinically relevant factors were included in the univariate model, whereas factors with p value less than 0.05 were considered for multivariate analyses. All statistical analyses were performed using SPSS software version 18.0 (SPSS Inc., Chicago, IL), and a p value less than 0.05 was considered statistically significant.

Figure 1 Flow chart of patients included in the study.

Table 2 Treatment of patients with gastric MALT lymphoma according to stage. 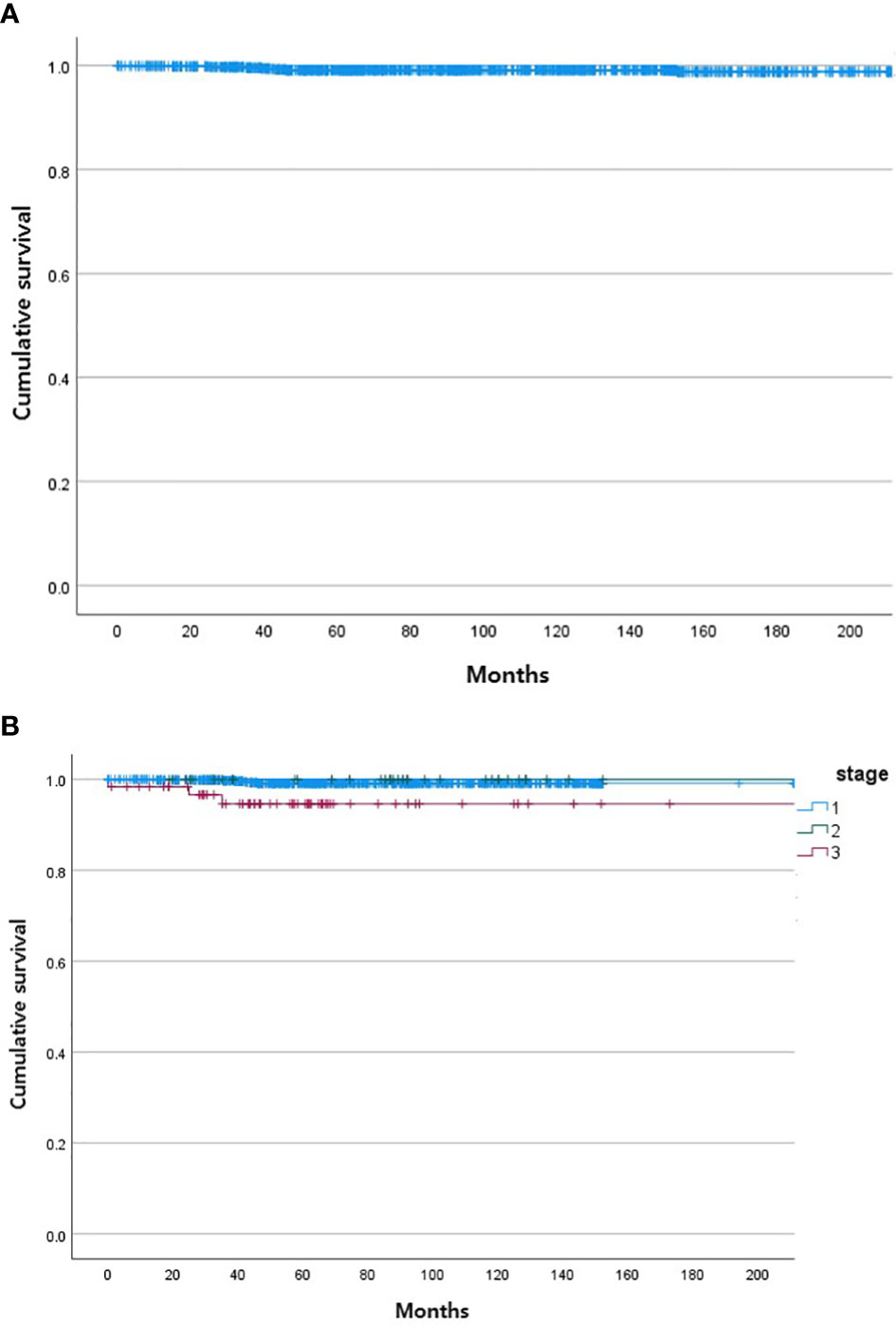 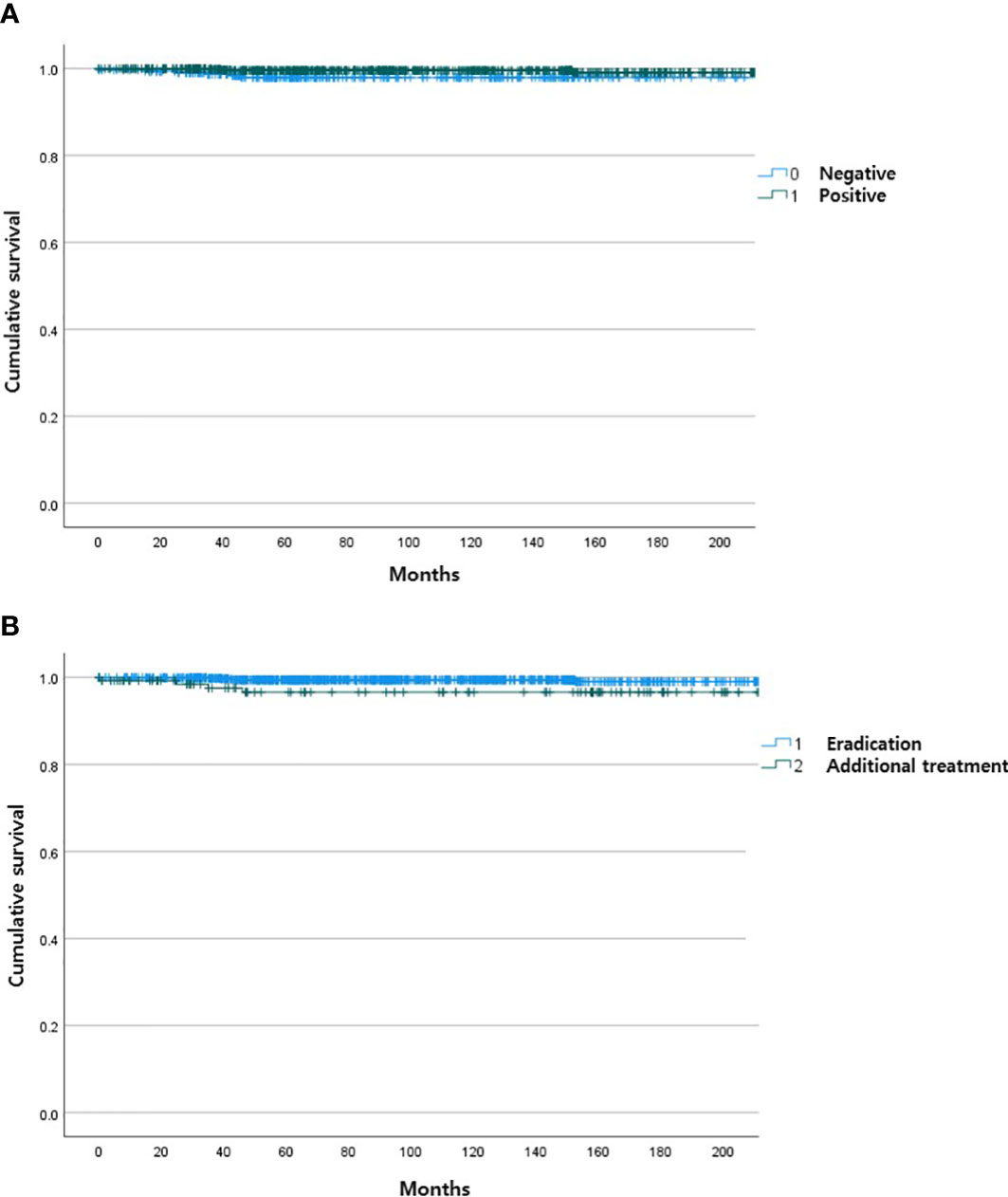 Figure 3 Kaplan Meier curves of gastric MALT lymphoma patient survival according to H pylori status (A) and type of treatment (B).

The main stay of treatment for low-grade gastric MALT lymphoma is H. pylori eradication. A systematic review of 1,408 patients with low-grade lymphoma at an early stage found that H. pylori eradication achieved remission in 77.5% of patients (12). Earlier studies reported that 5-year OS and disease-free survival (DFS) rates were as high as 90% and 75%, respectively, when lymphoma was treated at an early stage (24). However, a recent population-based study in France reported 5-year OS rates of 79%, which is considerably lower than that of previous studies (18). This study reported 25% of patients diagnosed at an advanced stage (III/IV), which is in contrast to most previous clinical studies that reported greater than 90% of patients with gastric MALT lymphoma diagnosed at a localized stage (25, 26). The larger percentage of patients in stage III/IV might have resulted in a lower survival rate in this study compared to previous studies.

The 10-year OS of gastric MALT lymphoma patients in our study was 99.1% and considerably higher than that reported previously. Korea has a high prevalence of H. pylori and shows the highest age-standardized incidence rate of gastric cancer worldwide (27, 28). A National Cancer Screening Program (NCSP) for gastric cancer invites every Korean individual 40 years of age or older to undergo endoscopy or an upper gastrointestinal series every 2 years. Participation rates for the NCSP increased from 7.5% in 2002 to 47.3% in 2012 (29). Gastric MALT lymphoma frequently is found incidentally at an early stage during screening endoscopy for gastric cancer in Korea. This is evidenced by the high rates of stage IE disease in our study.

Approximately 25% of patients do not respond to H. pylori eradication, and 20% of patients present with H. pylori-negative gastric MALT lymphoma (14, 15). The optimal management of these patients is not certain, and there is no consensus regarding optimal management of advanced gastric MALT lymphoma that has spread to lymph nodes or other extranodal sites. Current guidelines recommend H. pylori eradication as the first-line treatment of choice for all gastric MALT lymphomas (30). Our study showed great heterogeneity in treatment modalities and nonadherence to current guidelines. Surprisingly, some patients with localized stages received overtreatment with systematic therapy. Heterogeneity was the greatest in patients with advanced stage gastric MALT lymphoma. H. pylori eradication was performed in only 58% of stage III/IV patients. Chemotherapy and radiation was performed in 29.0% and 4.3% of patients. Despite the various treatments, the OS of advanced stage patients was still high in our study. Future studies are warranted to determine the best treatment modality for this group of patients. Efforts should be made to increase general awareness and adherence to current practice guidelines (16, 17, 31).

Recently, a MALT lymphoma prognostic index was developed from a Cox regression analysis of 401 patients (32). The authors reported age, Ann Arbor stage III or IV, and an elevated lactate dehydrogenase level as the main factors associated with survival. This prognostic index was derived from a heterogeneous group of patients including both gastric and non-gastric lymphomas. In our study, we examined the factors associated with survival in only gastric MALT lymphoma patients and found stage III/IV of the disease as the only factor associated with OS.

This study has limitations, most of which are inherent to its retrospective nature. First, there was a wide variation in treatments among patients, which only allowed us to estimate the OS of patients according to stage. The different types of treatments and their possible implications in the survival of patients need to be assessed in the future. H. pylori infection may have been underestimated in our study as the diagnostic methods were not predetermined. We also cannot exclude that the results from our study are influenced by confounding factors due to the observational nature of our study design; furthermore, risk of selection bias cannot be overlooked. Our study reported a high rate of 10-year OS compared to previous studies, even for advanced-stage gastric MALT lymphomas. We also did not find any disease related deaths associated with gastric MALT lymphomas which is contrary to previous reports (18). However, our results are consistent with those of a recent study that examined the survival rates of MALT lymphoma from the Korean Center Cancer Registry (33). This study reported survival rates of 97.9% for unknown stages of MALT-lymphoma during the 2013-2017 period. To the best of our knowledge, our study examined the largest number of gastric MALT lymphoma patients over a long follow-up period. We argue that our multi-center study is a fairly accurate illustration of routine clinical practice and outcomes of gastric MALT lymphoma despite its retrospective design.

The studies involving human participants were reviewed and approved by IRB of Catholic University of Korea. The ethics committee waived the requirement of written informed consent for participation.

JK and JCP: planned the study. JK, JCP, JL, and JA wrote the manuscript. All authors interpreted the date, revised the manuscript for intellectual content, and approved the final manuscript.

This research was supported by the 2020 Research Fund from the Korean College of Helicobacter and Upper Gastrointestinal Research. (KCHUGR-20200250).

The reviewer EJG declared a shared affiliation, with one of the authors JA to the handling editor at the time of the review.

8. Fischbach W, Goebeler ME, Ruskone-Fourmestraux A, Wündisch T, Neubauer A, Raderer M, et al. Most Patients With Minimal Histological Residuals of Gastric MALT Lymphoma After Successful Eradication of Helicobacter Pylori Can Be Managed Safely by a Watch and Wait Strategy: Experience From a Large International Series. Gut (2007) 56:1685–7. doi: 10.1136/gut.2006.096420

Copyright © 2021 Kim, Park, Lee, Ahn, Kang, Yang, Kim, Joo and Park. This is an open-access article distributed under the terms of the Creative Commons Attribution License (CC BY). The use, distribution or reproduction in other forums is permitted, provided the original author(s) and the copyright owner(s) are credited and that the original publication in this journal is cited, in accordance with accepted academic practice. No use, distribution or reproduction is permitted which does not comply with these terms.