Background: For gastric cancer (GC) with extensive lymph node metastasis (bulky N2 and/or para-aortic lymph node metastases), there is no standard therapy worldwide. In Japan, preoperative chemotherapy (PCT) followed by D2 gastrectomy plus para-aortic lymph node dissection (PAND) is considered the standard treatment for these patients. However, in China, the standard operation for GC patients with only bulky N2 metastases was D2 gastrectomy. Besides, after PCT, whether doing PAND improves survival or not is debatable for GC patients with para-aortic lymph node (PAN) metastases. Therefore, we conducted this study to investigate whether D2 lymphadenectomy alone is suitable for these patients after PCT.

Methods: We retrospectively collected data on patients from our electronic medical record system. GC patients with bulky N2 and/or PAN metastases who underwent D2 lymphadenectomy alone after PCT were enrolled. The survival outcomes and chemotherapy responses were analyzed and compared with the results of the JCOG0405 study.

Gastric cancer (GC) is the fifth most common cancer and the third leading cause of cancer-related deaths worldwide (1). Surgery is the most effective and basic treatment for GC (2). Radical surgery includes gastrectomy and lymphadenectomy. Based on the 15-year results of a Dutch trial, D2 lymphadenectomy is considered the standard treatment for GC (3). Currently, most guidelines, including those established by the ESMO (4), NCCN (5), JGCA (6) and CSCO (7), have introduced D2 lymphadenectomy as the standard surgical procedure for GC. For advanced gastric cancer (AGC), however, the efficacy of surgery alone is limited. In recent years, more attention has been given to comprehensive treatment, particularly perioperative chemotherapy (preoperative and postoperative chemotherapy) (8–11). There is a special group of patients who have bulky N2 and/or para-aortic lymph node (PAN) metastases. Eastern and Western scholars have different opinions on the treatment of these patients. A bulky nodal lesion surrounding the coeliac artery and its branches with a diameter ≥ 3 cm or at least two adjacent tumors ≥ 1.5 cm are defined as bulky N2 metastases by the Japanese scholars (12, 13). In addition, PAN with a diameter ≥ 1 cm is considered PAN metastases (12, 13). The tumor node metastases (TNM) staging system considers PAN as distant metastases (M1) (14). 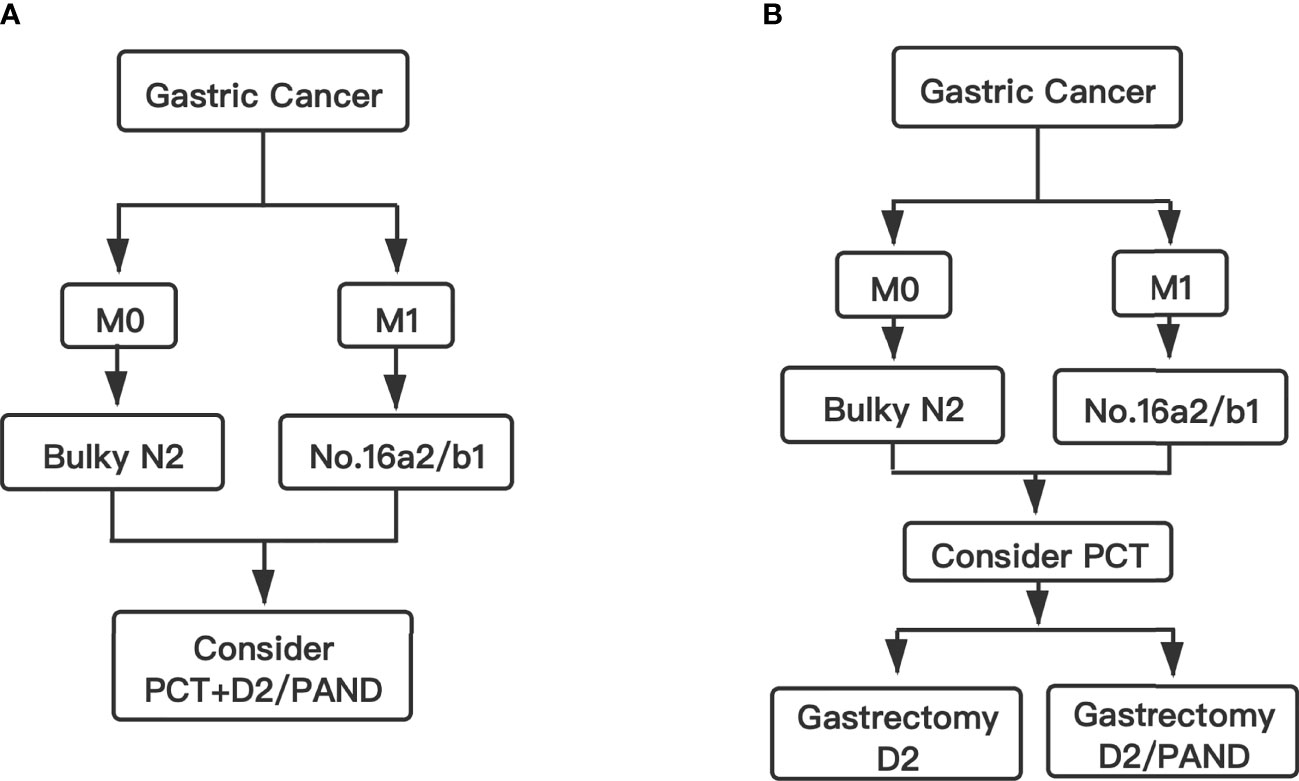 Data on patients who were admitted to Ruijin Hospital (Shanghai Jiao Tong University School of Medicine, Shanghai, China) between May 2009 and December 2017 were collected retrospectively from the electronic medical record system. Eligibility criteria were as follows: (1) histologically proven gastric adenocarcinoma; (2) bulky N2 metastases and/or PAN metastases (Stations No. 16a2/16b1) confirmed by multidetector computed tomography (MDCT); (3) no distant metastases except for PAN confirmed by MDCT; (4) no history of other cancers; (5) patients received PCT before surgery; and (6) patients underwent D2 gastrectomy without PAND. According to the status of extensive lymph node metastases, all enrolled patients were divided into three groups: the Bulky N2+/PAN- group (only bulky N2 metastases without PAN metastases), the Bulky N2-/PAN+ group (only PAN metastases without bulky N2 metastases) and the Bulky N2+/PAN+ group (both bulky N2 and PAN metastases) group. This study was performed with approval from the Ethics Committee of Ruijin Hospital affiliated to the Shanghai Jiao Tong University School of Medicine. All patients were enrolled after signing an informed consent form.

The preoperative chemotherapy regimen for all patients was EOX (epirubicin, oxaliplatin and capecitabine) (27). Epirubicin 50mg/m2 and oxaliplatin 130mg/m2 were administered on day 1, repeated every 3 weeks. Capecitabine (625mg/m2) was given orally twice daily for the first two weeks of a 3-week cycle. Most patients received an average of three cycles of EOX chemotherapy before the imaging evaluation. A few patients received additional cycles. The National Cancer Institute Common Terminology Criteria for Adverse Events (CTCAE, 4.0) was applied for the evaluation of adverse effects.

After the operation, the tumor specimens were evaluated pathologically. The tumor was staged in accordance with the Japanese Classifcation of Gastric Carcinoma (30). According to the proportion of tumors affected by degeneration or necrosis, the tumor regression grade (TRG) was divided into 4 degrees: grade 0, no part of the tumor affected; grade 1a, less than one-third affected; grade 1b, between one-third and two-thirds affected; grade 2, between two-thirds and the entire tumor affected; and grade 3, no residual tumor (pathological complete response, PCR) (6). The pathological evaluation was performed in the same manner as in the JCOG0001 (13), JCOG 0405 (12) and JCOG1002 (24)studies.

The postoperative chemotherapy regimens for all patients were EOX or XELOX (oxaliplatin and capecitabine). According to the patient’s postoperative physical status, we chose the three-drug regimen or the two-drug regimen. Most patients received an average of three cycles of postoperative chemotherapy. Through outpatient visits and telephone calls, we followed up all enrolled patients. Telephone calls was conducted every three months after surgery. Overall survival (OS) was measured from the date of the initial diagnosis of gastric cancer to the date of death or the last follow-up.

Characteristics of the Patients

Between May 2009 and December 2017, 83 patients satisfied all eligibility criteria and were enrolled in this study. The study population comprised 59 males and 24 females, with a male-to-female ratio of 2.5:1. The median age at diagnosis was 61 years (range 31-80). In this study, 44 (53.0%), 12 (14.5%) and 27 (32.5%) patients comprised in the Bulky N2+/PAN-, Bulky N2-/PAN+ and Bulky N2+/PAN+ groups, respectively. The detailed characteristics of patients in three groups were also shown in Table 1, including sex, age ECOG, differentiation, body mass index (BMI), tumor location, Borrmann type, clinical nodal status, the diameter of the largest lymph node (LNmax) and the type of gastrectomy. The tumor location were classified into cardia, body, antrum and whole stomach. The LNmax was measured using multi-detector-row computed tomography (MDCT). The types of gastrectomy were divided into proximal, distal, total and multiorgan resection. A total of 4 patients received multiorgan resection. One patient in the Bulky N2+/PAN- group received total gastrectomy plus distal pancreatectomy and splenectomy. Two patients in the Bulky N2+/PAN+ group received gastrectomy plus left lateral hepatic lobectomy. One patient in the Bulky N2+/PAN+ group, from whom a constrictive metastatic lesion was found in the small intestine 30cm from the proximal ileocecal colon, received gastrectomy plus partial enterectomy (approximately 5cm of small intestine was resected).

Table 1 Characteristics of all enrolled patients. 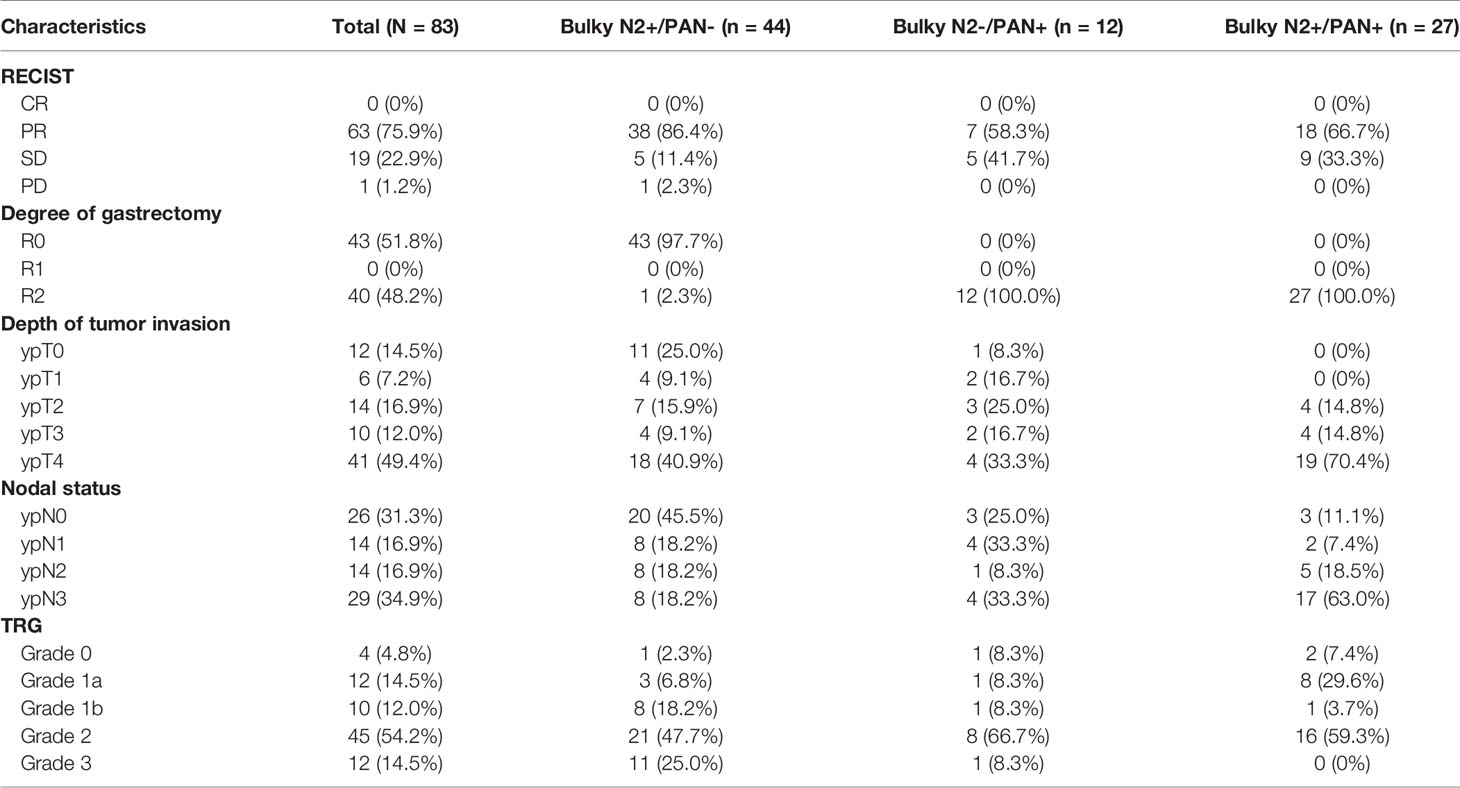 All patients underwent D2 gastrectomy without PAND. Therefore, patients with PAN metastases did not receive R0 resection. Besides, one patient in the Bulky N2+/PAN- group did not receive R0 resection. In this patient, metastatic nodules were found on the surface of the transverse colon and the root of the mesentery. Therefore, only 43 (51.8%) patients received R0 resection. An average of 37 (SD: 17.52, 95% CI: 33-41) lymph nodes were dissected in this study. For patients in the Bulky N2+/PAN-, Bulky N2-/PAN+ and Bulky N2+/PAN+ groups, the average numbers of lymph nodes dissected were 36, 31, and 41, respectively.

Only two (2.4%) patients experienced grade III or above complications after surgery. Both patients were in the bulky N2+/PAN- group and had leakage. One patient underwent a second surgery due to anastomotic leakage. Another patient with duodenal stump leakage did not undergo a second surgery. There was no treatment-related or in-hospital death. 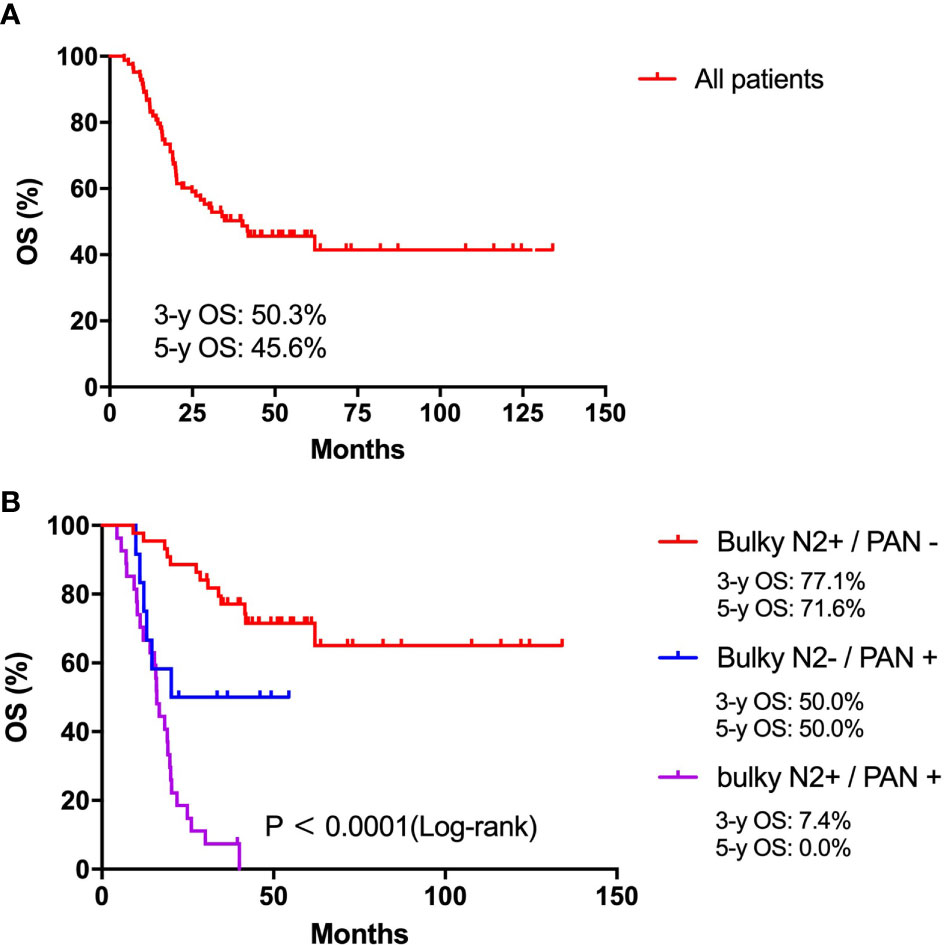 Currently, there is no standard treatment for gastric cancer with extensive lymph node metastases (bulky N2 and/or para-aortic lymph node metastases). In the West, these tumors are considered unresectable and tend to be treated with palliative chemotherapy. In Japan, PCT with the CS regimen followed by D2 gastrectomy plus PAND is considered the standard treatment for these tumors. Advances in research over recent years have focused only on regimen changes in PCT (12, 13, 24). However, it is unclear whether, on the basis of PCT, the addition of PAND could further improve prognosis compared to D2 lymphadenectomy alone. In China, PAND has not been widely carried out due to its highly technical difficulties, surgical complications and uncertain survival benefits. Therefore, we aimed to explore whether D2 lymphadenectomy alone is suitable for GC patients with bulky N2 and/or PAN metastases after PCT by comparing the results of our study and those from Japanese scholars.

The detailed OS rates of patients in the JCOG0001, JCOG0405, JCOG1002 studies and this study are showed in Table 3. The survival data were derived from analysis of 49 patients in JCOG0001 and 47 patients in JCOG0405 who underwent surgery, 52 eligible patients in JCOG1002 and all patients in this study. Integrated analysis demonstrated that the results of the JCOG0405 study were better than those of the JCOG0001 study for GC with extensive lymph node metastasis (31). In addition, the long-term outcomes of the JCOG1002 study also demonstrated that PCT with the CS regimen followed by D2 gastrectomy plus PAND remains the standard treatment for patients with extensive nodal metastases in Japan (32). Therefore, we mainly compared our study with the JCOG0405 study, in which 49 (92.5%) patients underwent surgery. 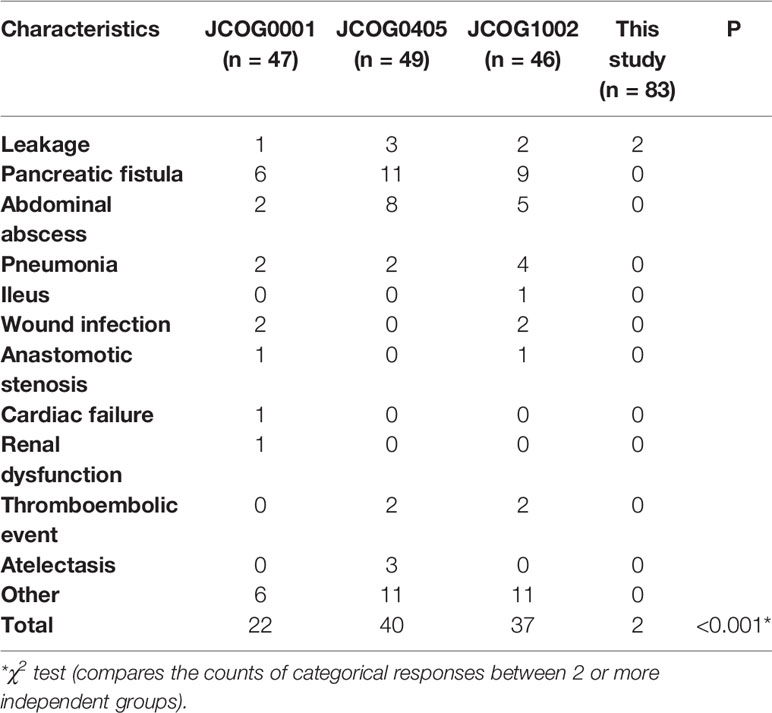 There are some limitations to this study. This study was a retrospective study. Prospective studies are needed to further confirm the results. In addition, we did not have detailed data from the JCOG studies, and we can compare only our results with the data presented in their published articles. Since these studies were not conducted at the same time, there were some biases that could not be avoided. However, this study not only confirms our practice of not performing PAND in GC patients with only bulky N2 metastases, but also reminds us of the importance of PAND in the treatment of GC patients with bulky N2 and PAN metastases.

The studies involving human participants were reviewed and approved by the Human Ethics Committee of Shanghai Jiao Tong University School of Medicine Ruijin Hospital. The patients/participants provided their written informed consent to participate in this study.

WX conceived and designed the study, analyzed the data and wrote the paper. WL participated in the design of the study and edited the final paper. LW, CH, SL, ZN, ZH, ZLZ, ZY, BS, and YZ collected the clinicopathological factors of all patients. RF, CL, XY, and MC followed up the patient’s survival status. CY revised the paper. MY and ZGZ gave professional guidance. All authors contributed to the article and approved the submitted version.

This work was supported by National Natural Science Foundation of China NO. 81772518 and clinical research project of Ruijin Hospital, Shanghai Jiao Tong University School of Medicine (DLY201602 and 2018CR003).

Copyright © 2021 Xu, Liu, Wang, He, Lu, Ni, Hua, Zhu, Sah, Yang, Zheng, Feng, Li, Yao, Chen, Yan, Yan and Zhu. This is an open-access article distributed under the terms of the Creative Commons Attribution License (CC BY). The use, distribution or reproduction in other forums is permitted, provided the original author(s) and the copyright owner(s) are credited and that the original publication in this journal is cited, in accordance with accepted academic practice. No use, distribution or reproduction is permitted which does not comply with these terms.