Purpose: The aim of this study was to investigate the effect of preoperative and postoperative malnutrition on postoperative short- and long-term outcomes for ampullary carcinoma after pancreatoduodenectomy (PD).

Methods: Data were collected retrospectively from 511 patients with ampullary carcinoma who underwent PD between June 2012 and June 2019. Nutritional status before and at 3, 6, and 12 months after operation was assessed by the scored Patient-Generated Subjective Global Assessment (PG-SGA). The patients were classified into well-nourished, moderately malnourished, and severely malnourished group according to the PG-SGA score. Propensity score matching (PSM) was performed to adjust baseline characteristics between preoperative group A (well-nourished and moderately malnourished group) and group B (severely malnourished group). After PSM, clinicopathological variables and postoperative complications were compared between the two groups. Univariate and multivariate Cox analysis was also conducted to investigate the prognostic factors of overall survival of patients with ampullary carcinoma who underwent PD.

Conclusions: Severe malnutrition before and at 6 and 12 months after operation significantly affects the long-term survival of patients with ampullary carcinoma who underwent PD. Additionally, the preoperative malnutrition was closely related to postoperative complications.

Malnutrition was a common problem in patients with malignant tumor and closely related to the immunosuppression and inflammatory activity (11–14), also considered as an important risk factor of postoperative outcomes (7, 13, 15). Numerous studies have revealed that preoperative malnutrition increased the incidence of postoperative complications and affected the long-term survival of patients (13, 15, 16). However, the studies examining whether postoperative malnutrition affects the long-term survival of patients who underwent PD for ampullary carcinoma were lacking. The scored Patient-Generated Subjective Global Assessment (PG-SGA) proposed by Ottery (17), as a noninvasive nutrition measurement tool for oncology patients, was a modification of the Subjective Global Assessment (SGA) (18). The preoperative scored PG-SGA has been validated in colectomy and hepatectomy in many countries (19–21); however, the correlation of postoperative malnutrition assessed by the scored PG-SGA and postoperative outcomes in patients of ampullary carcinoma following PD is still unknown.

The aim of this study was to investigate the effect of preoperative and postoperative malnutrition on postoperative outcomes for ampullary carcinoma after PD.

Patients who underwent PD for ampullary carcinoma at the Tongji Medical Hospital of Tongji Medical College of Huazhong University of Science and Technology, between June 2012 and June 2019, were retrospectively identified. Individuals with incomplete clinical data, neoadjuvant treatment, nutritional interventions before admission, and combined with other organ resections (such as hepatectomy or colectomy) were excluded from this study (Figure 1). After discharge, adjuvant chemotherapy was administered to all patients unless the patient was lost to follow-up or for other reasons. Regimens utilized for ampullary cancer were typically either S1-based or gemcitabine (Gem)-based. Patients were followed up every 3 months for the first 2 years and then every 6 months for a total of 5 years. The enrolled patients were followed until death or June 30, 2021, whichever came first. All patients provided written informed consent to participate in the study, and the study was approved by the Ethics Committee of the local hospital (no. TJ-IRB20190418). 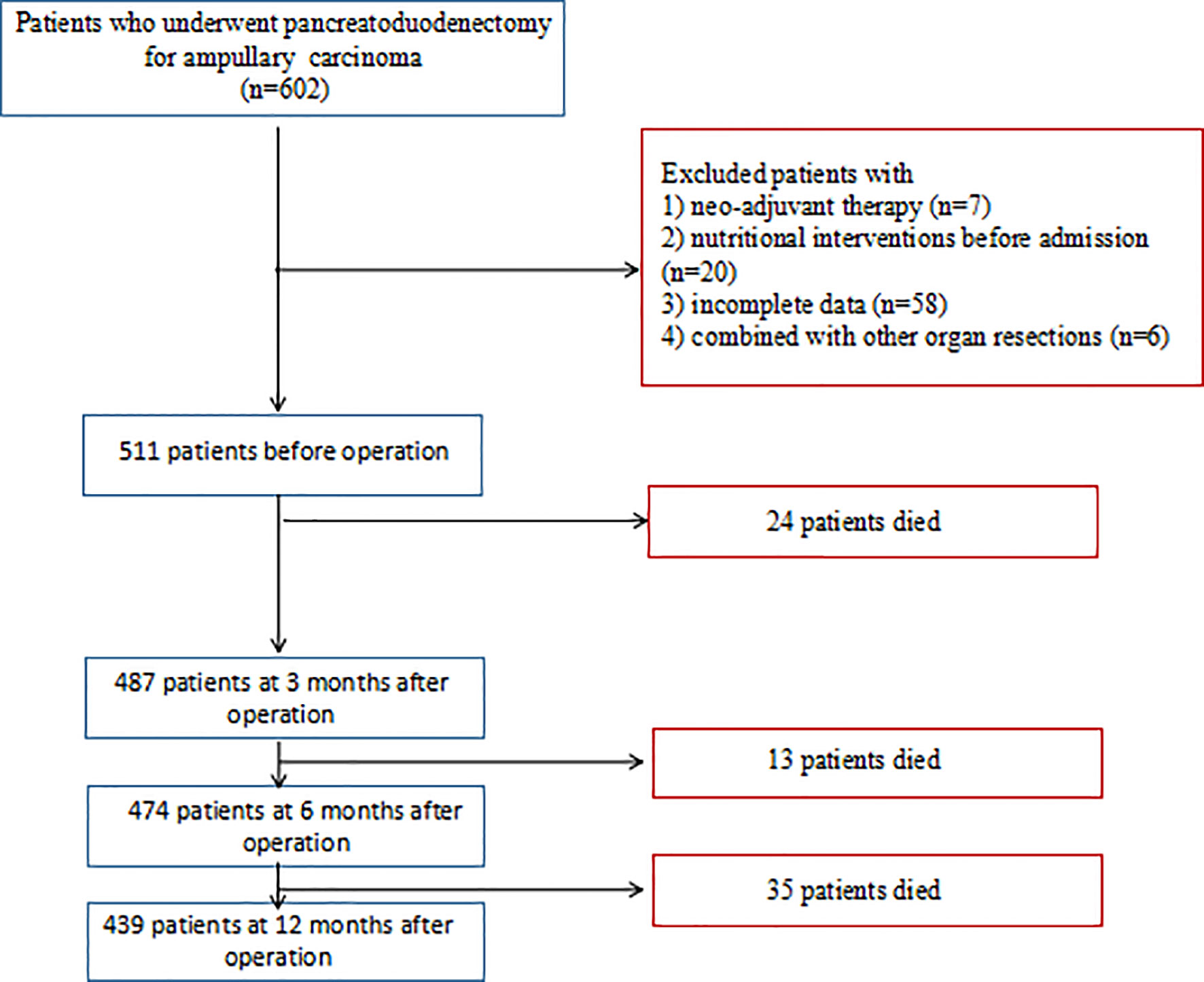 Figure 1 Flow diagram of before surgery and at 3, 6, and 12 months after pancreatoduodenectomy.

Major postoperative complications were defined as grade III or higher in the Clavien–Dindo classification (22). For pancreatic fistula, the diagnosis of postoperative pancreatic fistula (POPF) was determined according to the definitions provided by the International Study Group of Pancreatic Surgery (ISGPS) (23). Delayed gastric emptying (DGE) (24), biliary leak (25), and postoperative hemorrhage (PPH) (26) were defined by the definition of the International Study Group of Pancreatic Surgery. Overall survival (OS) was calculated from date of surgery to the date of all-cause death.

Continuous variables were expressed as medians and interquartile ranges (IQRs) and were compared using Mann–Whitney U and Kruskal–Wallis tests. Some variables were dichotomized using median values or normal values. Categorical variables were expressed as frequencies and percentages, and differences in variables between the groups were compared using Pearson’s chi square or Fisher’s exact tests. Survival was estimated with the Kaplan–Meier method and log-rank tests. Cox proportional-hazard regression analysis was used for univariate and multivariate analysis. Variables with p < 0.1 on the univariate analysis were included in the multivariate analysis. For all tests, differences with p < 0.05 were considered statistically significant. Statistical analysis was performed using the Statistical Package for Social Sciences (SPSS) version 22.0 (IBM Corp., Armonk, NY, USA). 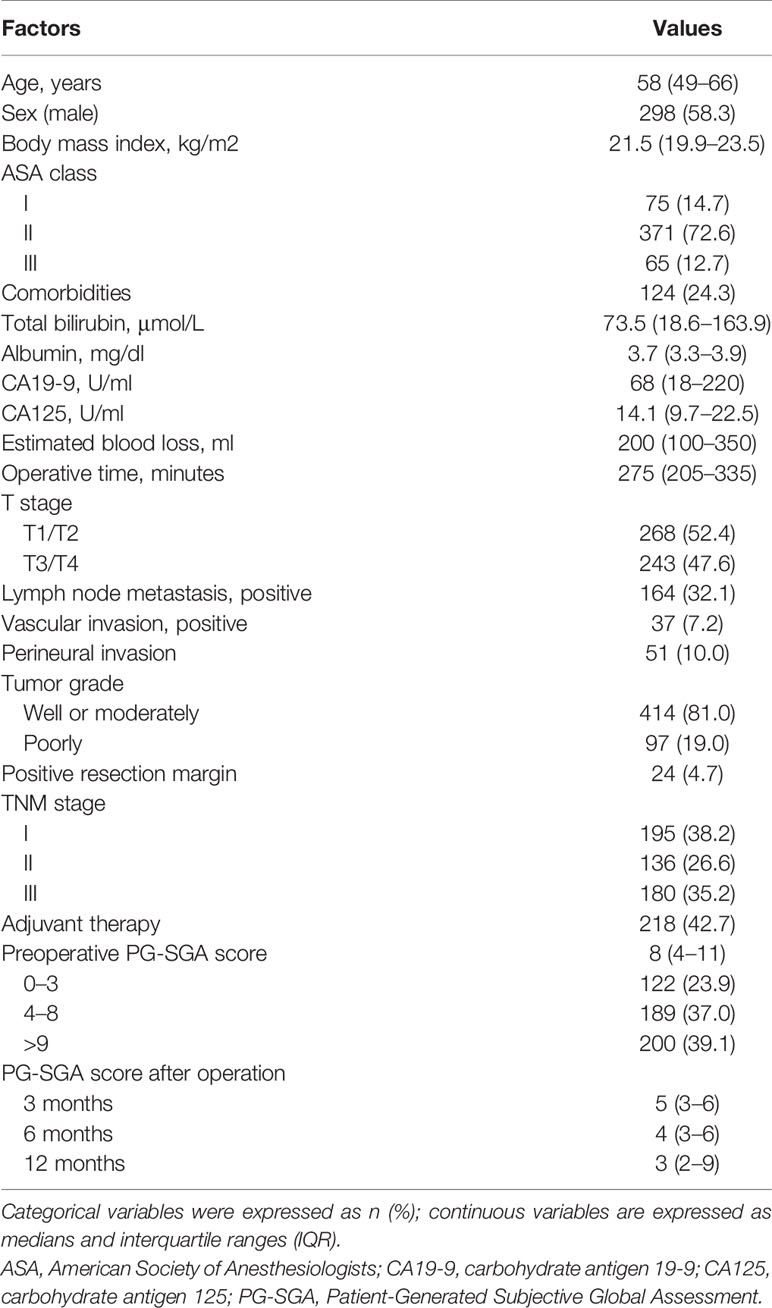 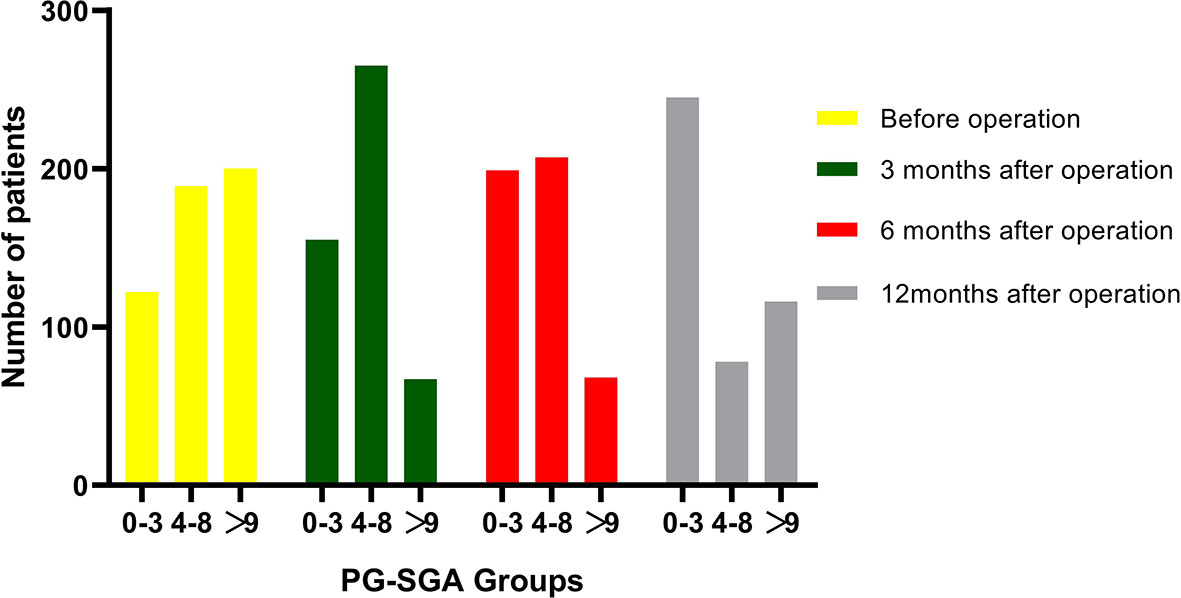 Comparisons of Clinicopathological Characteristics Between Groups

To control for the effects of confounding factors, propensity score matched analysis was performed to balance the clinicopathological variables between preoperative group A (well-nourished and moderately malnourished group) and group B (severely malnourished group). Before PSM analysis, patients in group B were significantly older (p = 0.021), with a higher total bilirubin (p < 0.001), CA19-9 (p < 0.001), and CA125 level (p = 0.001) and more advanced TNM stage (p = 0.002) and T stage (p = 0.048), and fewer patients received chemotherapy (p = 0.015) than those in group A. After PSM analysis, the baseline characteristics between preoperative groups A and B were adjusted. The results of the analysis of the associations between preoperative nutritional status and clinicopathological characteristics are shown in Table 2. 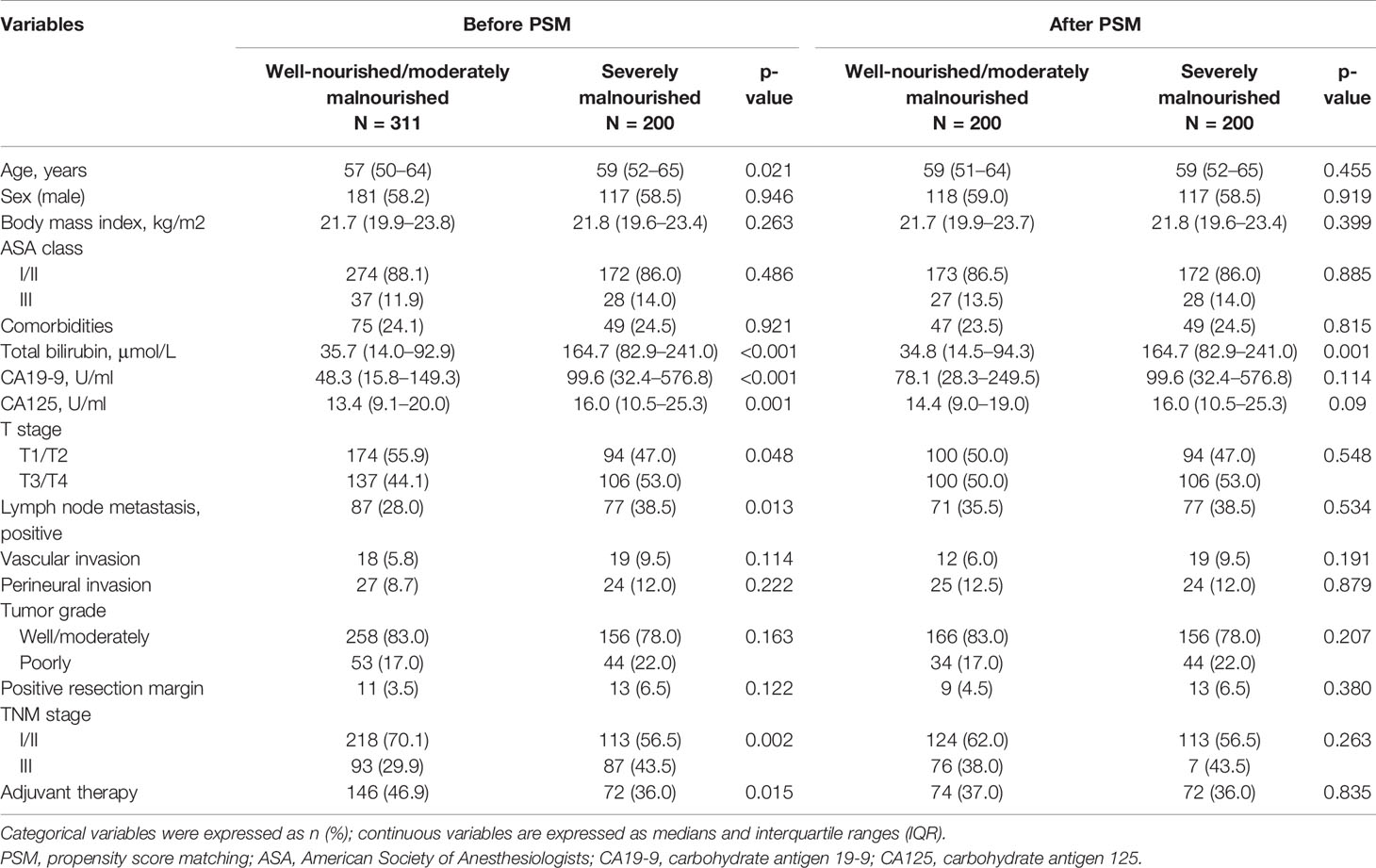 Table 2 The relationships between preoperative nutritional status and clinicopathological characteristics in 511 patients underwent pancreatoduodenectomy for ampullary carcinoma after PSM. 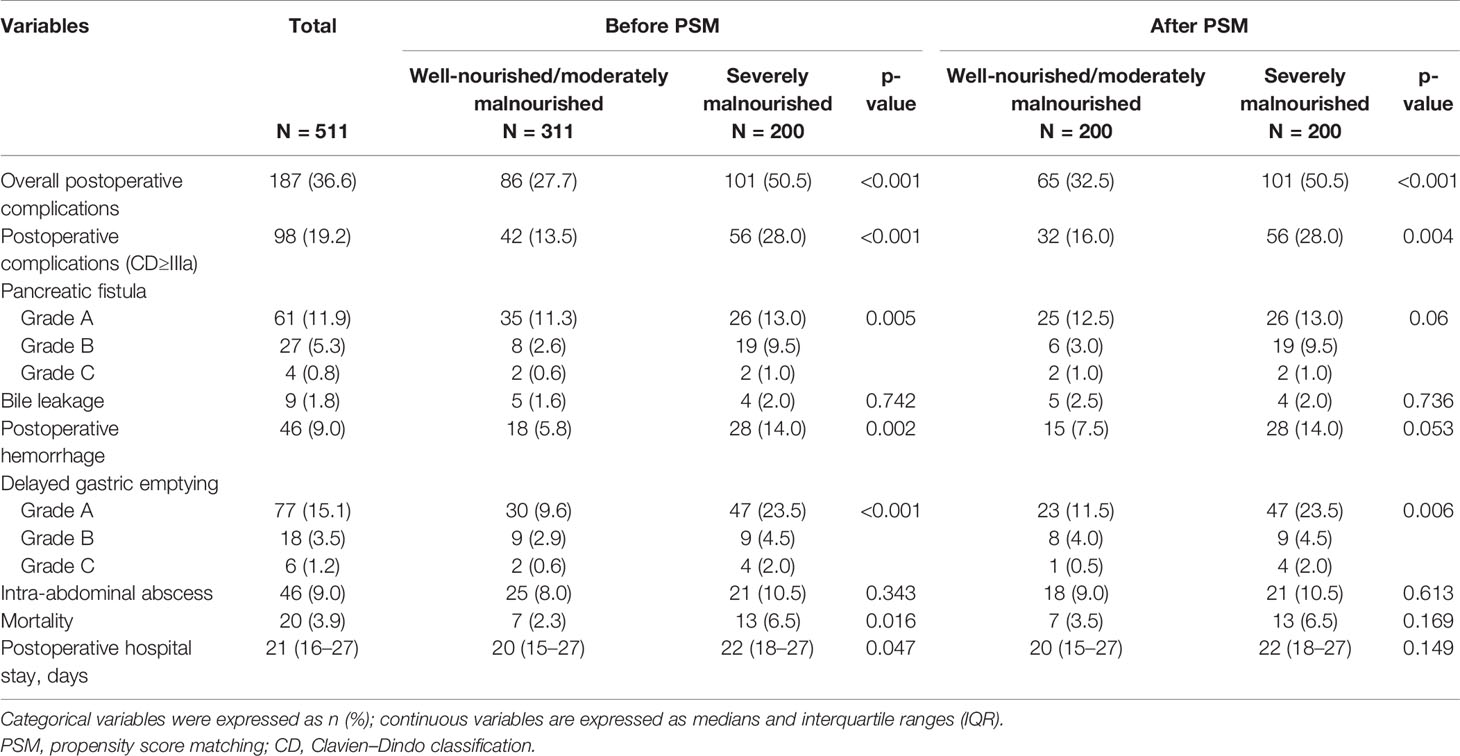 Table 3 The relationships between preoperative nutritional status and postoperative short outcomes in 511 patients who underwent pancreatoduodenectomy for ampullary carcinoma after PSM.

Overall Survival Analysis According to the Preoperative and Postoperative Nutritional Status 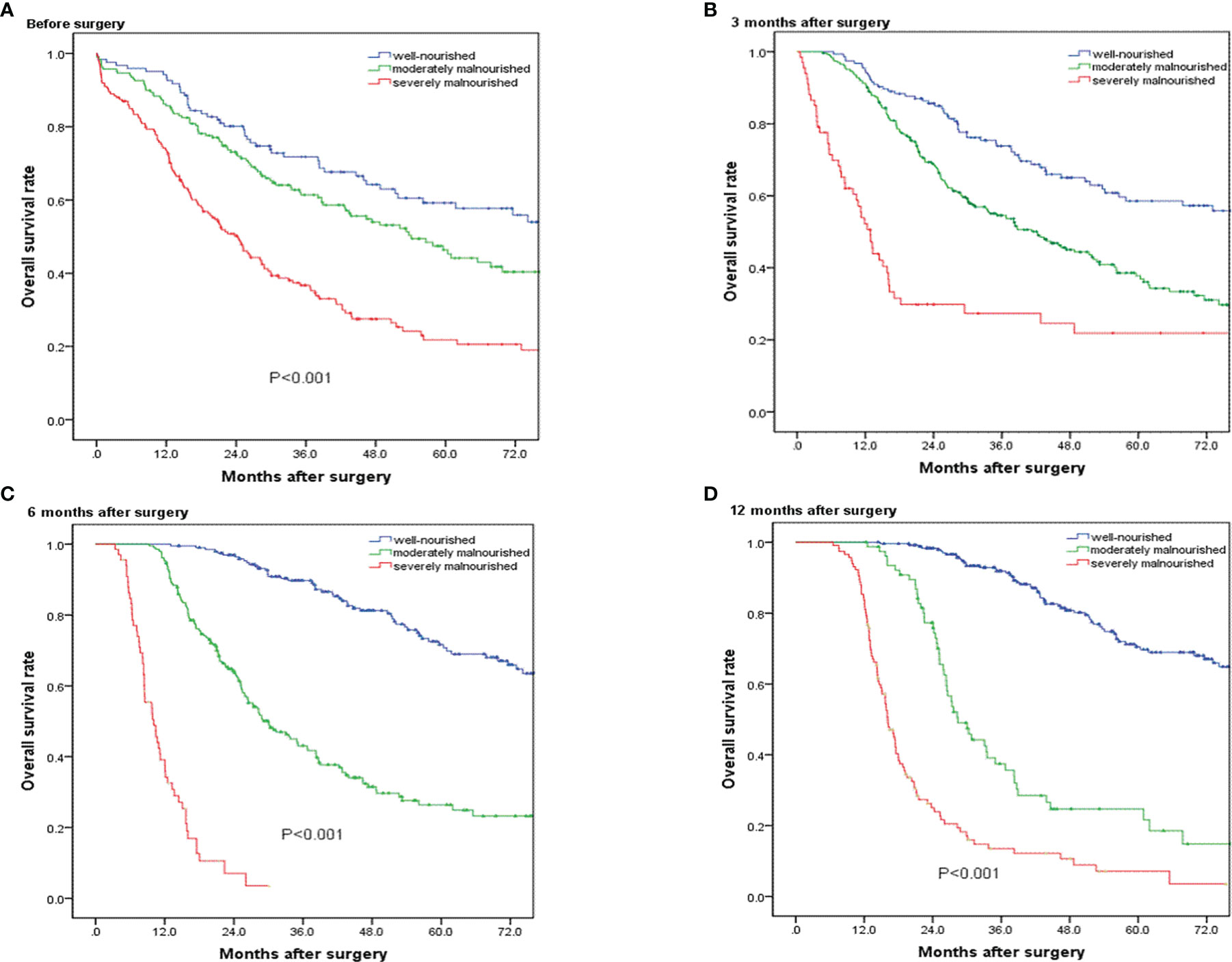 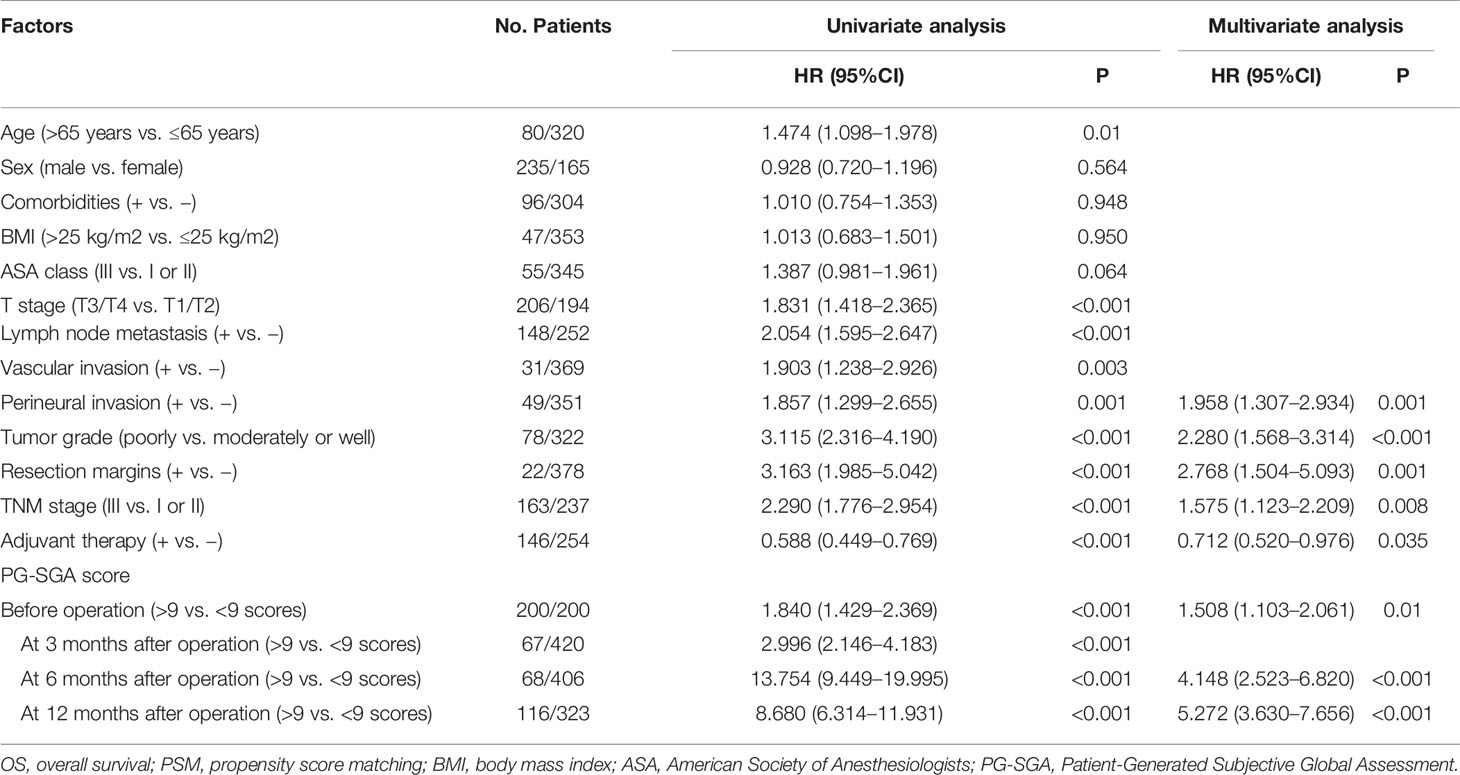 In our study, the incidence of postoperative complications was more higher in severely malnourished group than in well-nourished or moderately malnourished group. The multivariate Cox proportional hazards regression analysis showed that severe malnutrition (PG-SGA score > 9 scores) before operation and at 6 and 12 months after operation were independent prognostic factors in patients who underwent PD for ampullary carcinoma.

The nutritional status of hospitalized patients could be assessed by various methods, included objective anthropometric measurements, and subjective measurements based on the clinical history and physical examination (29–31). Among the aforementioned, the PG-SGA was the widely recommended method for the assessment of nutritional status of the tumor patients (17, 19, 32). The scored PG-SGA consists of a quantitative score and a qualitative global assessment, which was more sensitive to a subtle changes in nutritional status than the SGA. The higher the PG-SGA score is, the greater the risk of malnutrition is. Many previous studies have demonstrated that the scored PG-SGA was an effective and reliable tool for nutrition evaluation. Additionally, the NRS-2002 was also the preferred subjective screening tool for nutritional risk. According to the previous study, the PG-SGA scale is simple and accurate and may be the most suitable method for evaluating the nutritional status of malignant tumor patients and was more sensitive to the nutritional status in the general population of cancer patients compared with the NRS-2002.

Malnourished patients with malignant tumor often coexists with systemic inflammatory response and immunosuppression (14, 33). As previously reported (34, 35), the malignant tumors incite a systemic inflammatory response, which often triggers the release of inflammatory cytokines and chemokines, such as tumor necrosis factor and IL-1 and IL-6. Meanwhile, the systemic inflammatory response induced profound catabolic effects on host metabolism, for instance, which caused the depletion of skeletal muscle and visceral function proteins. In addition, neutrophilia and lymphocytopenia were commonly involved in cancer-related inflammation (36–38). Patients with immunosuppression and inflammatory response have poor tolerance to operation, recover slowly after surgery, and more susceptible to postoperative complications. Previous reports have found a relationship between preoperative malnutrition and poor short-term outcome and long-term survival, which were consistent with our results. In our cohort, we found that the incidence of postoperative complications in malnourished group was significant higher than that in the well-nourished group, and the preoperative malnutrition was the independent risk factor of overall survival.

To date, the relationship between postoperative long-term nutritional status and survival remains unknown. Previous studies reported that malnutrition after gastrectomy significantly and adversely affects overall survival; nutritional interventions to lessen the impact of postoperative malnutrition can offer hope for prolonged survival. However, they could not completely adjust for the negative survival impact of patient backgrounds in the malnutrition group and excluded patients with gastric cancer recurrence. In our study, to control for the effects of confounding factors, propensity score matched analysis was performed to balance the clinicopathological variables between preoperative group A (well-nourished and moderately malnourished group) and group B (severely malnourished group). After PSM analysis, we revealed relationships between poor survival and malnutrition before and at 6 and 12 months after PD. The PG-SGA score >9 scores before operation and at 6 and 12 months after operation were independent prognostic factors in patients who underwent PD for ampullary carcinoma. However, the PG-SGA score >9 scores at 3 months after operation was not the independent prognostic factor in our study.

In addition, as previously reported, the loss of skeletal muscle (SM) and visceral functional proteins was considered as the important indication of nutritional status (31, 39). The SM and visceral functional protein depletion leads to changes in intra- and extracellular electrolyte regulations and reduction in the metabolically active tissue and often coexists with immunosuppression, which were the important mechanisms for increased postoperative complications and poor survival after PD. de Oliveira Pereira et al. (39) quantitatively calculated the body composition using computed tomography and assessed the nutritional status of hospitalized patients, and they found that the PG-SGA was closely correlated with the skeletal muscle index. Meanwhile, compared with the weight loss and BMI, the scored PG-SGA was a more sensitive and precise method to assess nutritional status of patients with malignant tumor. Laky et al. (31) showed that BMI and percentage of weight loss were not able to effectively detect malnutrition of patients with malignant tumor because they could be masked by edema and dehydration. Similarly, Wigmore et al. (40) found that the median BMI of 20 pancreatic cancer patients at diagnosis was 20.7 (range, 19.5–23.6) kg/m2 despite a median weight loss of 14.2 (range, 10–20%) in the previous 6 months.

This study has some limitations. First, it was retrospective and single-centered; thus, susceptible to the inherent problems of such design features, subject selection bias was unavoidable. In the future, prospective studies with larger sample sizes, and external validation of our findings in other populations, are essential.

The original contributions presented in the study are included in the article/supplementary materials. Further inquiries can be directed to the corresponding authors.

All patients provided written informed consent to participate in the study, and the study was approved by the Ethics Committee of the local hospital (no. TJ-IRB20190418).

Conception and design: JJ, RQ, and GX. Administrative support: RQ and MW. Provision of study materials or patients: JJ and RQ. Collection and assembly of data: JJ, GX, and XW. Data analysis and interpretation: JJ. Manuscript writing: all authors. All authors contributed to the article and approved the submitted version.

Copyright © 2021 Jin, Xiong, Wang, Peng, Zhu, Wang and Qin. This is an open-access article distributed under the terms of the Creative Commons Attribution License (CC BY). The use, distribution or reproduction in other forums is permitted, provided the original author(s) and the copyright owner(s) are credited and that the original publication in this journal is cited, in accordance with accepted academic practice. No use, distribution or reproduction is permitted which does not comply with these terms.