Purpose: To investigate whether incomplete thermal ablation is associated with a high risk of tumor progression in patients with hepatocellular carcinoma (HCC), and to compare the efficacy of repeated thermal ablation and transarterial chemoembolization (TACE) for residual tumor after incomplete ablation.

Methods: This retrospective study included 284 patients with unresectable HCC who underwent thermal ablation from June 2014 to September 2020. The response of the initially attempted ablation was classified into complete (n=236) and incomplete (n=48). The progression-free survival (PFS) and overall survival (OS) were compared between patients with complete and incomplete responses, before and after a one-to-one propensity score-matching (PSM), and between patients in whom repeated ablation or TACE was performed after a first attempt incomplete ablation.

This retrospective study was approved by the institutional review boards of the Second Xiangya Hospital and the Affiliated Cancer Hospital of Xiangya School of Medicine and was performed in accordance with the Declaration of Helsinki. The need for written informed consent was waived by the institutional review board due to the retrospective nature of the present study.

Between June 2014 and September 2020, 438 consecutive patients with HCC, who underwent thermal ablation as an initial therapy at two institutions, were selected for this study. Patients meeting the following criteria were included: those with (a) a preserved liver function (Child-Pugh A or B); (b) an Eastern Cooperative Oncology Group performance status 0; (c) at least one target lesion for measurement; and (d) the absence of macrovascular invasion and extrahepatic metastasis. The exclusion criteria were as follows: patients who (a) did not follow-up (n=69); (b) had more than five HCC lesions (n=47); (c) had infiltrative HCC (n=38). Finally, 284 patients were included in the present study. Among those 284 patients, 69 were from institution A and 215 were from institution B. The flowchart of the study population is shown in Figure 1. 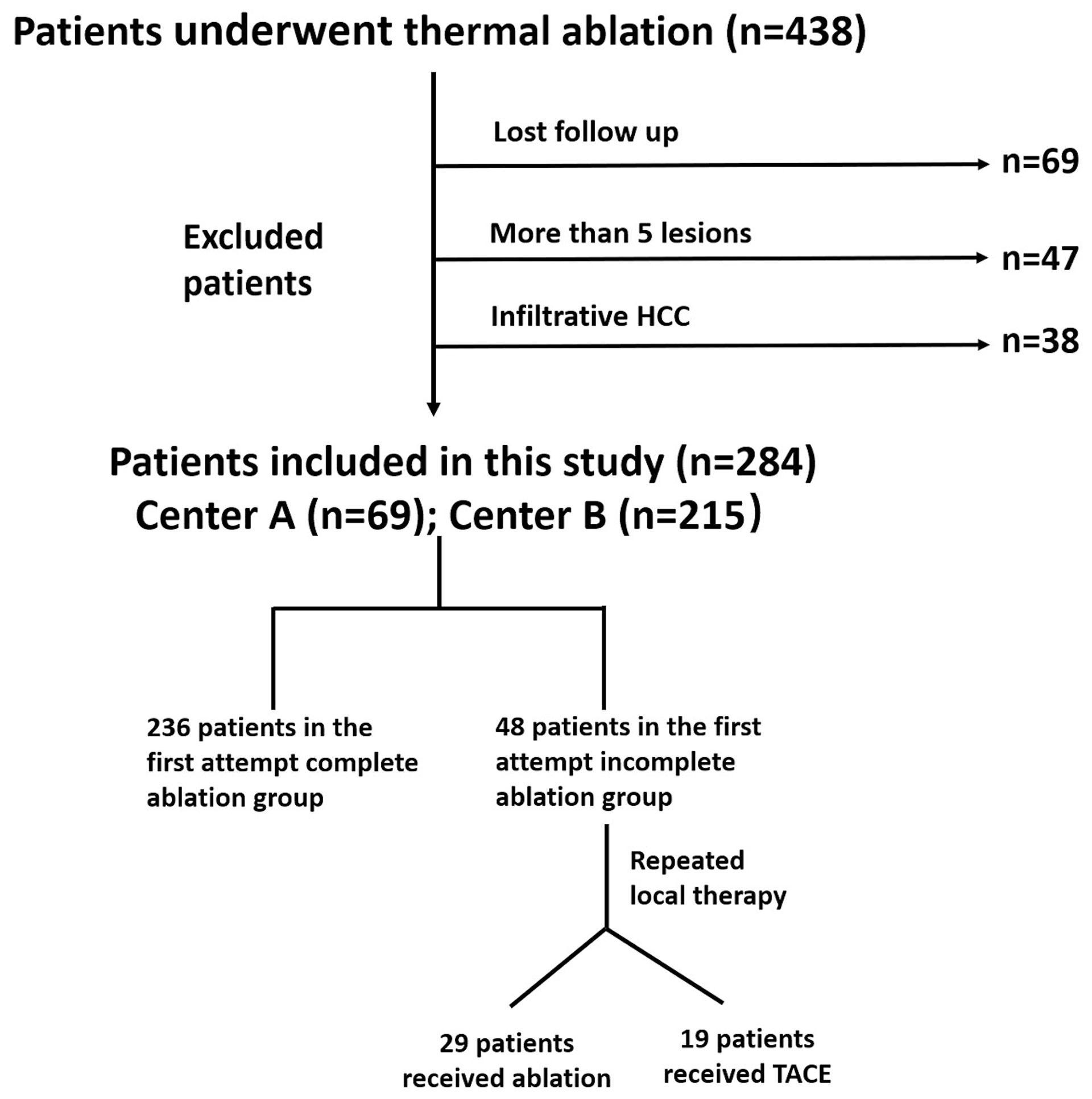 Figure 1 Flowchart of the study population.

Thermal ablation was performed under computed tomography (CT) or ultrasound guidance using a microwave ablation (MWA) (KY-2000, Kangyou Medical Instrument Co. Ltd., China) or a radiofrequency ablation (RFA) system (CELON Power System, Olympus Corporation, Japan) by four board-certified senior interventional radiologists. The microwave ablation was set at 60 to 80 W for 3 to 20 min. The radiofrequency ablation was set at 30 to 80 W for 10 to 40 min. For tumors larger than 3.0 cm, an overlapping ablation was performed. Contrast-enhanced CT immediately after thermal ablation was routinely performed to assure a minimum safety margin of 0.5 cm when possible. For multifocal lesions, a maximum of three lesions was ablated in a single session, and the remaining were ablated within one week after the first session.

In patients with an incomplete response after a first attempt ablation, the feasibility of repeated thermal ablation was assessed. Usually, the lesion was considered infeasible to ablation when it was in an unfavorable location or had poor conspicuity on unenhanced CT or ultrasound. When considered feasible, the patients were treated with repeated thermal ablation. When considered infeasible, TACE was performed as an alternative therapeutic option by several board-certified senior interventional radiologists. The femoral artery was routinely catheterized. Selective hepatic arteriography was performed and a 2.2-F coaxial microcatheter (Carnelian, Tokai Medical Products, Japan) was placed in the tumor feeders. Chemoembolization was performed using a super-selective approach by slowly injecting an oil-epirubicin emulsion. The gel-foam slurry was used to embolize the proximal tumor feeders. The oil-epirubicin emulsion was prepared by mixing iodized oil (up to 15 mL; Lipiodol, Guerbet Asia Pacific Ltd, Hong Kong, China) with distilled water containing 50 mg to 120 mg of epirubicin dissolved in a ratio of 3:1.

After the procedure, the patients were followed up at 1, 3, 6, and 12 months in the first year and every 6 months subsequently if no recurrence was detected. At each follow-up visit, contrast-enhanced CT/MRI of the liver was performed to evaluate the radiological response according to the mRECIST. Local tumor progression (LTP), intrahepatic distal recurrence (IDR), and extrahepatic recurrence (ER) were recorded. If tumor progression occurred, the choice of treatment for recurrent HCC was dependent on the site of the tumor, liver function, and the general condition of the patient.

Data on the potential risk factors for PFS and OS were collected, including the first attempt ablation (complete/incomplete), Child-Pugh class (A/B), age (≤56 years/>56 years), gender (male/female), number of tumors (single/multiple), modality of guidance for ablation (CT/ultrasound), type of thermal ablation (MWA/RFA), tumor size (≤3 cm/>3 cm), etiology of hepatitis (none/hepatitis B virus/hepatitis C virus/alcoholic), cirrhosis (presence/absence), level of alpha-fetoprotein (AFP; ≤400 ng/mL/>400 ng/mL), and level of the systemic immune inflammation index (SII; ≤330/>330). The SII was calculated as (N*P)/L, where “N” represents the neutrophil count, “P”, the platelet count, and “L”, the lymphocyte count; a cut-off of 330 for SII was used as previously described (11). In the present cohort, patients were stratified based on the median age (56 years).

Categorical variables were compared using the Chi-square test or Fisher’s exact test, as appropriate. Continuous variables were compared using the Mann-Whitney U test or t-test, as appropriate. To diminish potential confounding and selection bias in the two groups, propensity score-matching (PSM) was applied. PSM is a statistical method which can reduce the bias due to confounding variables by accounting and matching the covariates that may affect the treatment outcome. Each group was matched according to the generated PSM using a caliper width of 0.1. In patients with multiple lesions, the characteristics of the largest lesion were recorded for analysis. The potential risk factors for PFS and OS were compared using a log-rank test before and after PSM. Cox proportional hazard ratios (HRs) were calculated to identify the independent risk factors for PFS and OS. All potential variables were included in the multivariate Cox regression analysis. Statistical analysis was carried out using a statistical software (Statistical Package for the Social Sciences version 24, International Business Machines Corporation, USA) or R software (version 4.0.2, http://www.R-project.org). P <0.05 was considered to be statistically significant.

The entire study population included 238 males and 46 females, with a mean age of 56.0 ± 11.0 years, ranging from 27 to 81 years. There were 240 patients with hepatitis B, 14 with hepatitis C, and 4 with alcoholic hepatitis. The diagnosis of HCC was based on either histological evidence (n=41) or radiological evaluation with reference to the 2018 version of Liver Imaging Reporting and Data System (n=243). There were 244 patients with Child-Pugh A and 40 patients with Child-Pugh B. In the entire study population, 48 patients were in the very early stage (Barcelona Clinic Liver Cancer [BCLC]-0), 190 were in the early stage (BCLC-A), and 46 were in the intermediate stage (BCLC-B). The baseline characteristics of the patients from the two institutions are shown in Table 1. 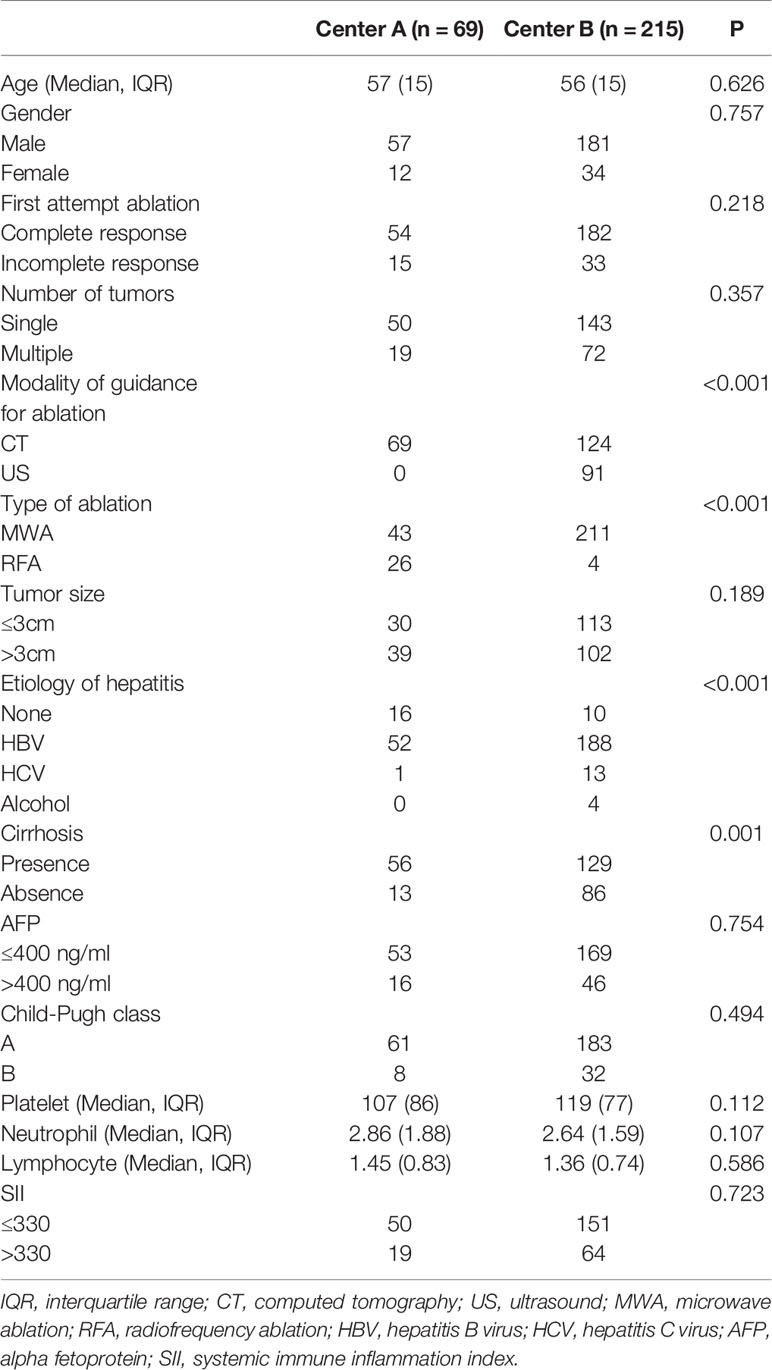 Table 1 The baseline characteristics of patients among the two institutions. 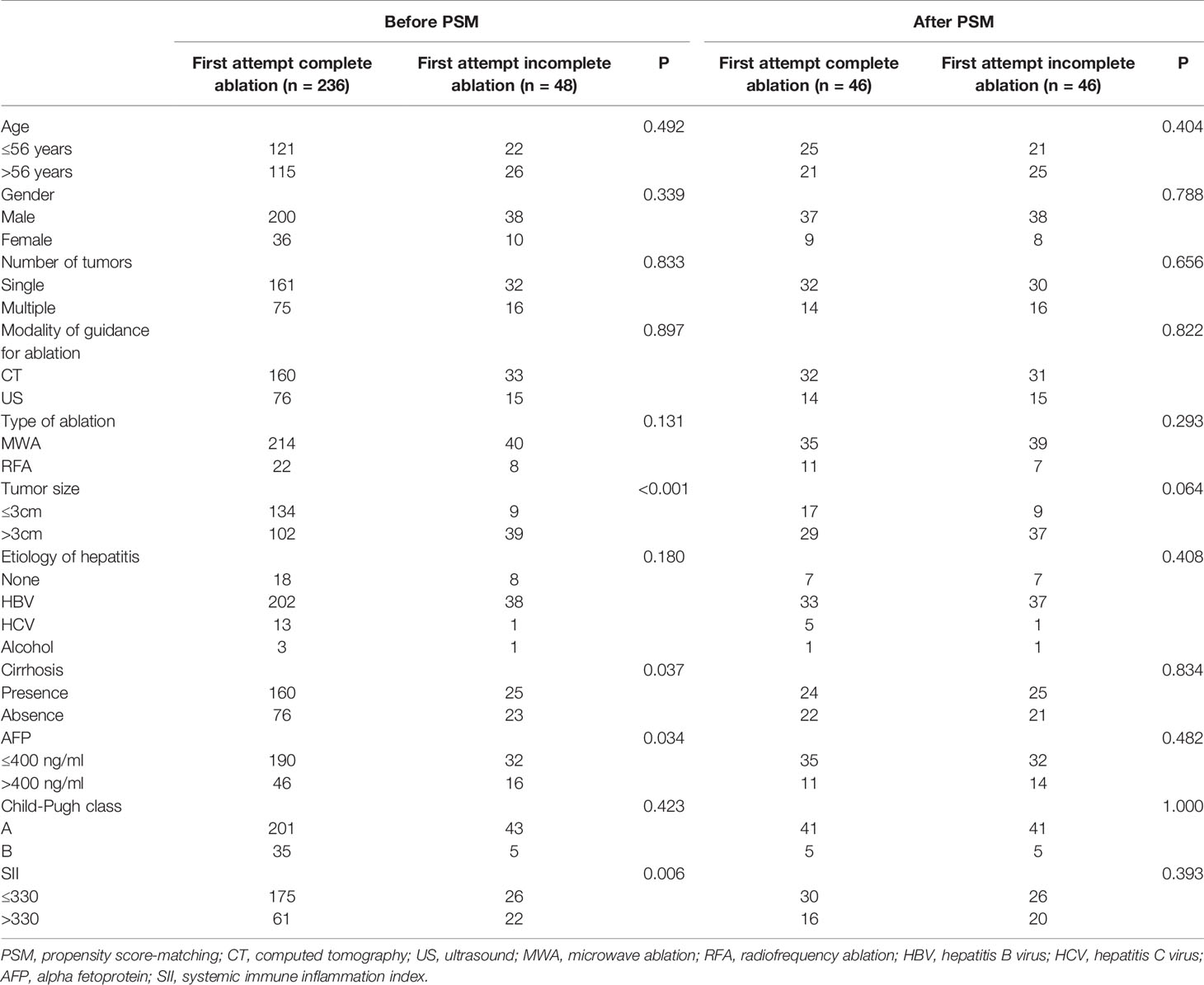 Table 2 Patients’ baseline characteristics before and after PSM. 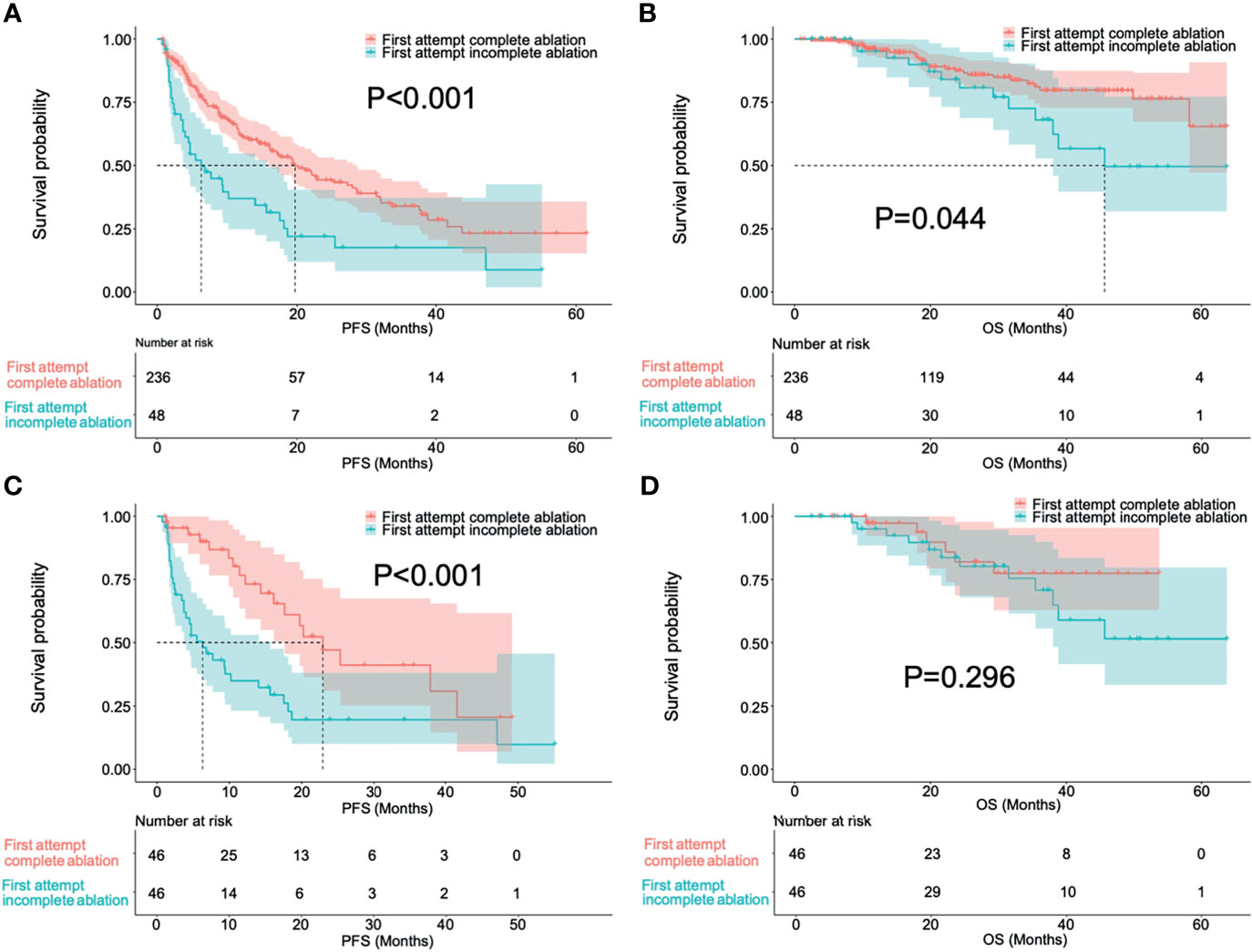 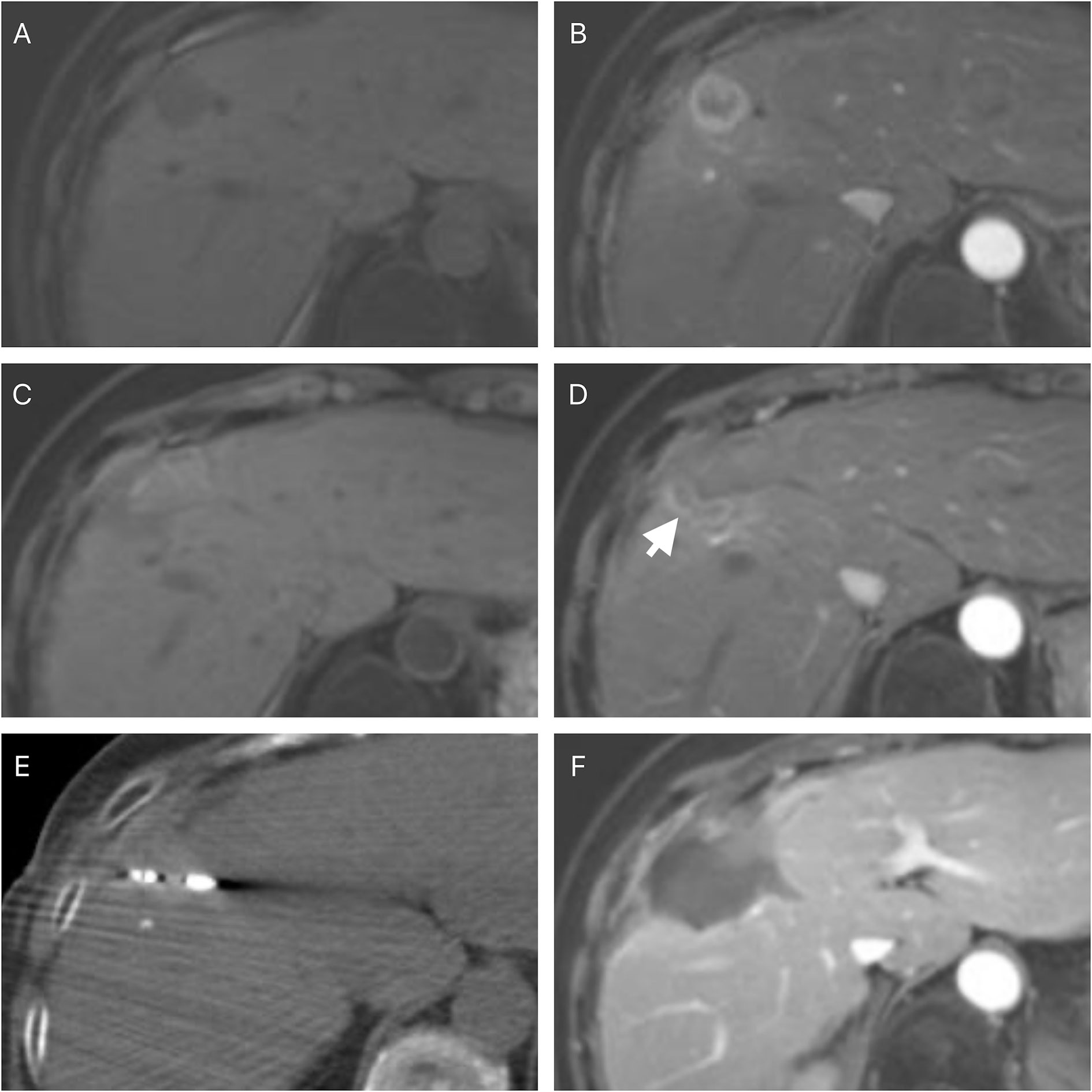 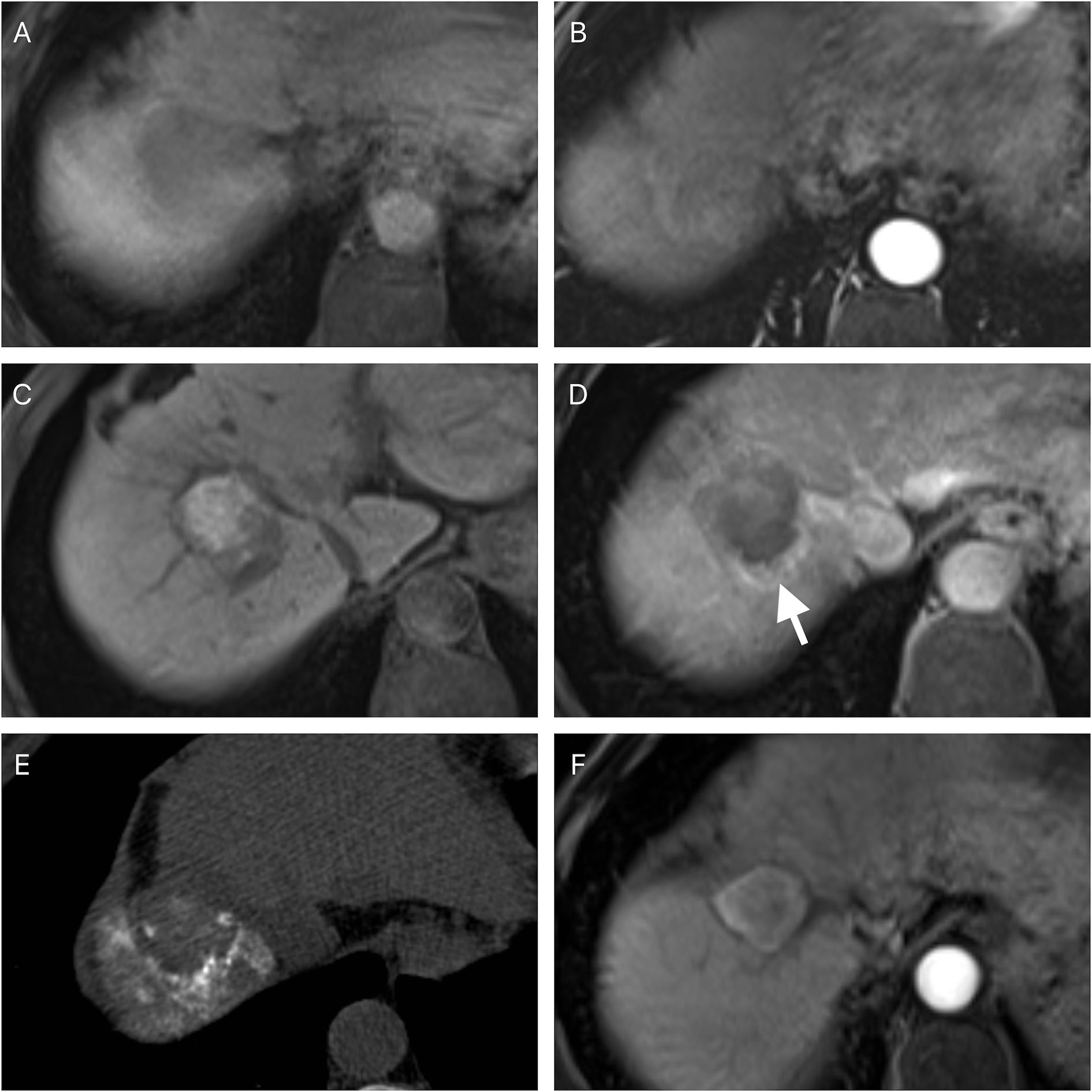 Figure 5 Survival curves in progress-free survival (A) and overall survival (B) of patients treated with repeated ablation and transarterial chemoembolization after a first attempt incomplete ablation.

Univariate and Multivariate Analysis for PFS and OS

Usually, the endpoint of thermal ablation is adequate tissue heating to induce coagulative necrosis throughout the defined target area (15). This endpoint may not easily be achieved in lesions of a large size or in unfavorable locations because heat cannot be conducted to the edge of the tumor, thereby causing reversible cellular injury and insufficient ablation. The detail mechanism of insufficient ablation resulting a tumor progression was still unknown. In several pre-clinical studies, the mechanism of the relationship between tumor progression and insufficient tumor ablation-induced reversible cellular injury has been demonstrated. Insufficient ablation exposes viable tumor to sublethal heat stress, and HCC cells may display a more malignant phenotype. Jondal et al. reported that moderate heat stress may result in insufficient ablation and stimulate HCC growth, with the mechanism partly mediated by the growth factor dependent PI3K/mTOR/AKT signaling pathway (9). Moreover, Sublethal heat stress-induced O-GlcNAcylation coordinates the Warburg effect to promote tumor progression by providing anabolic substrates to meet the high energy demand of rapid cell division (16). Several previous studies have also demonstrated insufficient thermal ablation accelerates the residual tumor progression by promoting Epithelial-Mesenchymal Transition (EMT), increasing tumor-infiltrating myeloid-derived suppressor cells (MDSCs) and reducing T-Cell-Mediated anti-tumor immune responses (17, 18). According to the results of the pre-clinical studies, patients with first attempt incomplete response are theoretically more prone to tumor progression than patients with first attempt complete response, and the results of the present clinical study support these findings. The present study also showed no difference in OS between patients with first attempt complete response and patients with incomplete response following a repeated ablation or TACE after a one-to-one PSM analysis. The probable reason for this result may be attributed to the following: (a) although patients with first attempt incomplete ablation showed a poor PFS than that of patients with complete ablation, re-treatment with repeated ablation or TACE is still effective in such patients (19, 20); (b) the OS of HCC patients is related to numerous factors, such as age, liver function, the severity of the underlying liver disease, tumor burden, antiviral therapy, and performance status, the first attempt incomplete ablation is not sufficient to influence the OS of HCC patients (21, 22).

Additionally, the multivariate Cox regression analysis showed that a first attempt incomplete response and Child-Pugh class B were independent risk factors for PFS, while a higher AFP level and Child-Pugh class B were independent risk factors for OS. These results are consistent with the aforementioned results that first attempt incomplete ablation might not influence the OS of patients, despite the poor PFS. Regarding the Child-Pugh class, it has been reported that the therapeutic outcomes of patients with HCC are associated with liver function by several previous studies (23, 24) and the present study has shown a similar result. High AFP level represents a more aggressive nature of the tumor and has been associated with a poor therapeutic outcome in patients with HCC (25, 26); the results of the present study have confirmed this finding.

There are several limitations to the present study. First, this was a multicenter and retrospective study with an inevitable heterogeneity in treatments (two centers, different ablation devices) between the institutions, which may have led to a selection bias. Although propensity score-matching (PSM) was applied to diminish potential confounding and selection bias, there were still some heterogeneous between the two groups, such as follow up imagine (CT/MRI) and ablation type (MWA/RFA). Second, the limited follow-up period of the study may have impeded the thorough survival assessment of the patients. Third, the limited number of patients with first attempt incomplete ablation who received repeated ablation (n=29) or TACE (n=19) may hamper the reliability of the results. The long-term therapeutic outcomes of the two groups need to be investigated in further studies.

The studies involving human participants were reviewed and approved by Second Xiangya Hospital and the Affiliated Cancer Hospital of Xiangya School of Medicine.

Copyright © 2021 Tan, Tang, Zhao, Zhang and Xiao. This is an open-access article distributed under the terms of the Creative Commons Attribution License (CC BY). The use, distribution or reproduction in other forums is permitted, provided the original author(s) and the copyright owner(s) are credited and that the original publication in this journal is cited, in accordance with accepted academic practice. No use, distribution or reproduction is permitted which does not comply with these terms.