Highlighting the Place of Metastasis-Directed Therapy in Isolated Liver Metastases in Prostate Cancer: A Case Report

Metastatic prostate cancer remains a challenge for clinicians. Metastases involve mainly the bone compartment and can manifest as oligometastatic disease. In this setting, the role of metastasis-directed therapies (MDT) including surgery and/or stereotactic body radiotherapy is currently evaluated. Visceral metastases are less common and have very poor prognosis in mPC. Whether treating isolated visceral metastases such as liver metastases with MDT could increase the prognosis remains unknown. We report the management of a prostate cancer patient who progressed on androgen deprivation therapy with apparition of two liver metastases. We describe the feasibility of combining MDT with abiraterone acetate and prednisone in a patient with metastatic castration-resistant prostate cancer. MDT allowed the interruption of abiraterone acetate, preventing cumulative toxicity of this agent.

Prostate cancer (PC) is, among men, the second common malignancy and the fifth cancer-related leading cause of death worldwide (1). Even if localized PC is treated with a curative intent and excellent outcome, the management of metastatic PC (mPC) remains a challenge for clinicians with a very poor outcome and limited therapeutic options. Metastases from prostate cancer involve mainly the bone compartment and lymph nodes (2). Between the localized and generalized metastatic statuses, oligometastatic disease represents a transition defined by a limited number of metastatic lesions that do not rapidly spread to other sites. Even if this transitional status naturally progresses into disseminated metastatic disease, it could represent a window of opportunity for localized radical treatment. Oligometastatic disease is usually defined by a maximum number of metastatic sites between 3 and 5 (3). However, this definition is largely based on conventional imaging such as bone scan and thoraco-abdominal computed tomography (CT); the increasing use of modern imaging such as PSMA-positron emission tomography (PET) and whole-body magnetic resonance imaging (MRI) will probably allow a better definition of this entity. There are no clear guidelines concerning the management of oligometastatic disease in PC, but many trials are evaluating the role of metastasis-directed therapies (MDT) such as stereotactic body radiotherapy (SBRT) or surgery in this setting (4). Even if MDT could potentially increase progression-free survival (PFS) and delay the initiation of androgen deprivation therapy (ADT) in hormono-sensitive metastatic PC, the role of MDT remains controversial in castration-resistant PC (CRPC) patients with visceral metastases (5, 6). We report the case of a patient with isolated liver metastases progressing on ADT. Could MDT be an option in this patient?

In July 2008, based on a prostate-specific antigen (PSA) increase (8.5 ng/ml), a 69-year-old man without relevant medical history was diagnosed with a localized prostate adenocarcinoma Gleason 7 (3 + 4). No distant lesion was seen on conventional work-up (bone scan and thoraco-abdominal CT). Radical prostatectomy was performed with lymphadenectomy, confirming Gleason 8 (4 + 4) prostate adenocarcinoma invading the seminal vesicles (cT3bN0M0) (Figure 1). Postsurgical PSA was undetectable. Six months later, PSA increased to 0.34 ng/ml and salvage pelvic radiotherapy (70 Gy in 35 fractions of 2 Gy according to the intensity-modulated radiotherapy (IMRT) and an 18-month duration of ADT was performed with a subsequent decrease of PSA (<0.02 ng/ml). In June 2014, PSA re-increased (1.05 ng/ml) with no visible lesion on bone scan and thoraco-abdominal CT; the testosterone level was within normal range (200 ng/dl). A 68Gallium (Ga)-PSMA-PET-CT showed two infra-centimetric lymph node lesions (one in the para-rectal area and one in the pre-sacral area). ADT was initiated, and SBRT was performed on these lesions, with a delivered dose of 54 Gy (2 Gy per fraction). PSA decreased progressively with a nadir of 0.5 ng/ml in June 2015 (testosterone <20 ng/dl); ADT was maintained. In October 2015, PSA increased to 10 ng/ml on ADT (testosterone <20 ng/dl) and thoraco-abdominal CT showed one isolated liver lesion. 68Ga-PSMA-PET, 18Fluorodeoxyglucose (FDG)-PET, and liver magnetic resonance imaging (MRI) showed two liver lesions (lesion A = an 11-mm lesion located in segment VII and lesion B = a 20-mm lesion involving both segments V and VI) (Figure 2). Biopsy confirmed prostate adenocarcinoma without any neuroendocrine differentiation (Figure 3). Abiraterone acetate plus prednisone (AA-P) was added to ADT and resulted, at 6 months, in a PSA decrease (0.15 and 0.16 ng/ml at 6 and 9 months, respectively) and modest tumor shrinkage (-10% following RECIST criteria at 6 and 9 months, respectively). The limited number of liver lesions, the well-circumscribed aspect of these lesions, the absence of any other visible lesion, and the absence of a more pronounced radiological response led us to consider MDT in addition to ADT and AA-P; in August 2016, microwave needle ablation was performed on lesion A, and 4 weeks later, we performed SBRT (50 Gy in 5 fractions of 10 Gy) on lesion B that was less accessible to radiofrequency (Figure 4). This treatment was well tolerated. In November 2016, PSA was undetectable (<0.01 ng/ml) and liver MRI did not show any active lesion, which led us to consider interruption of AA-P and continuation of ADT alone. Nine months after AA-P arrest, PSA re-increased (0.6 ng/ml) and 68Ga-PSMA-PET showed a new liver metastasis, close to the irradiated site, without any other distant lesion. AA-P was restarted in October 2017 (testosterone <20 ng/dl) but did not result in a PSA decrease (1.1 ng/ml) or radiological response (5% increase in tumor size, following RECIST criteria) after 9 months; no new lesion was detected on 68Ga-PSMA-PET. In front of this maintained radiological stable disease, surgical liver segmentectomy was performed in September 2018; histopathology showed Gleason 8 (4 + 4) prostate cancer adenocarcinoma without neuroendocrine differentiation. Resection was complete, and there were no postoperative complications. AA-P was stopped after surgery while ADT was continued. PSA remained stable at 6 and 9 months (1.5 and 1.9 ng/ml, respectively), and thoraco-abdominal CT did not show any new metastatic lesion at 6 months. However, 12 months after surgery, PSA increased to 12 ng/ml and multiple liver lesions appeared on thoraco-abdominal CT and liver MRI. In September 2019, docetaxel (75 mg/m2 every 3 weeks) was started without any radiological response after 3 cycles (progressive disease following RECIST criteria). Six cycles of cabazitaxel (20 mg/m2 every 3 weeks) were administered, resulting in a 6-month lasting stable disease. After failure of docetaxel and cabazitaxel, we rapidly initiated platinum-based chemotherapy. After six courses, our patient presented a radiological partial response following RECIST criteria with maintained quality of life. In April 2021, clinical and radiological response was maintained and no treatment had to be reintroduced. 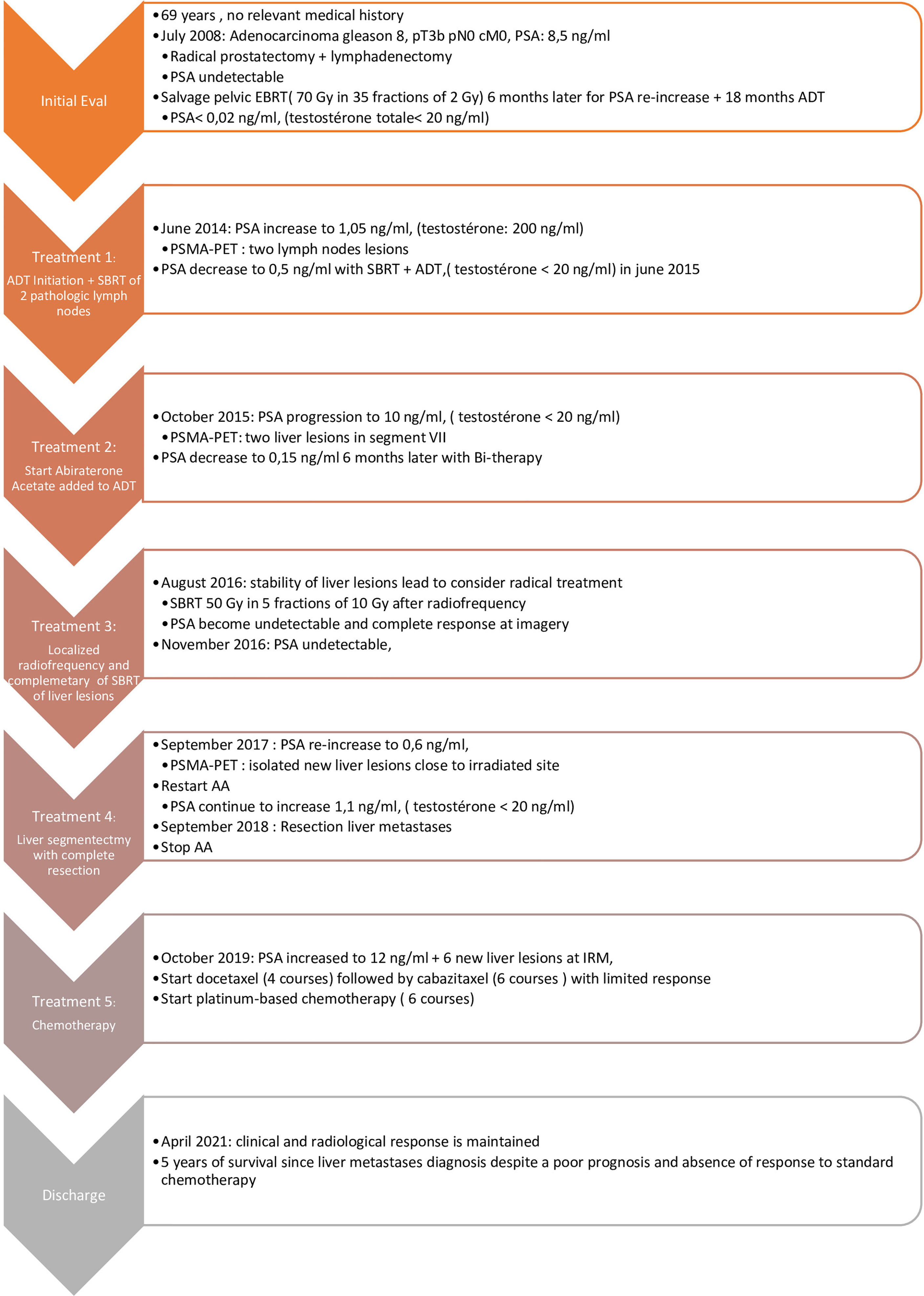 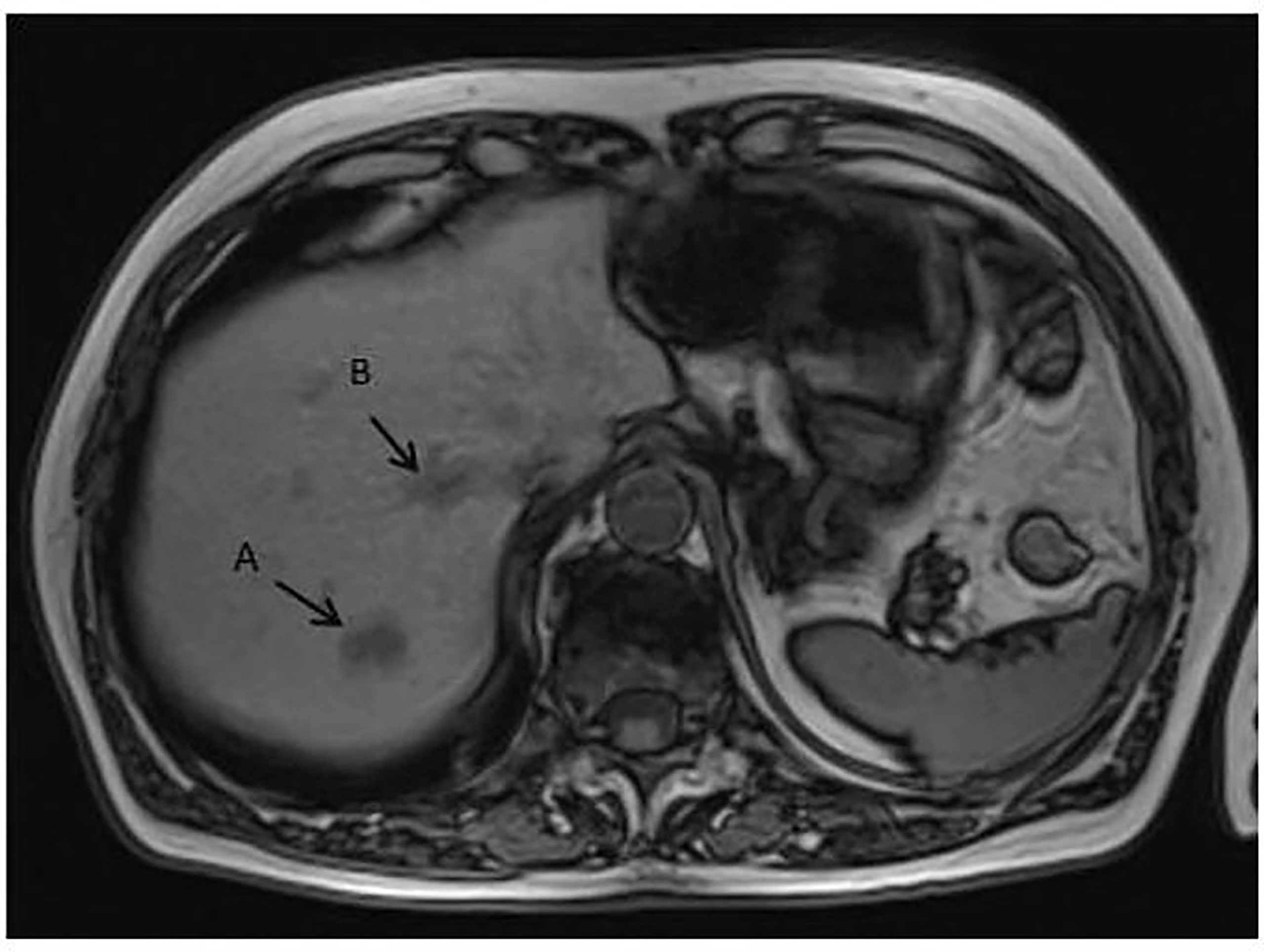 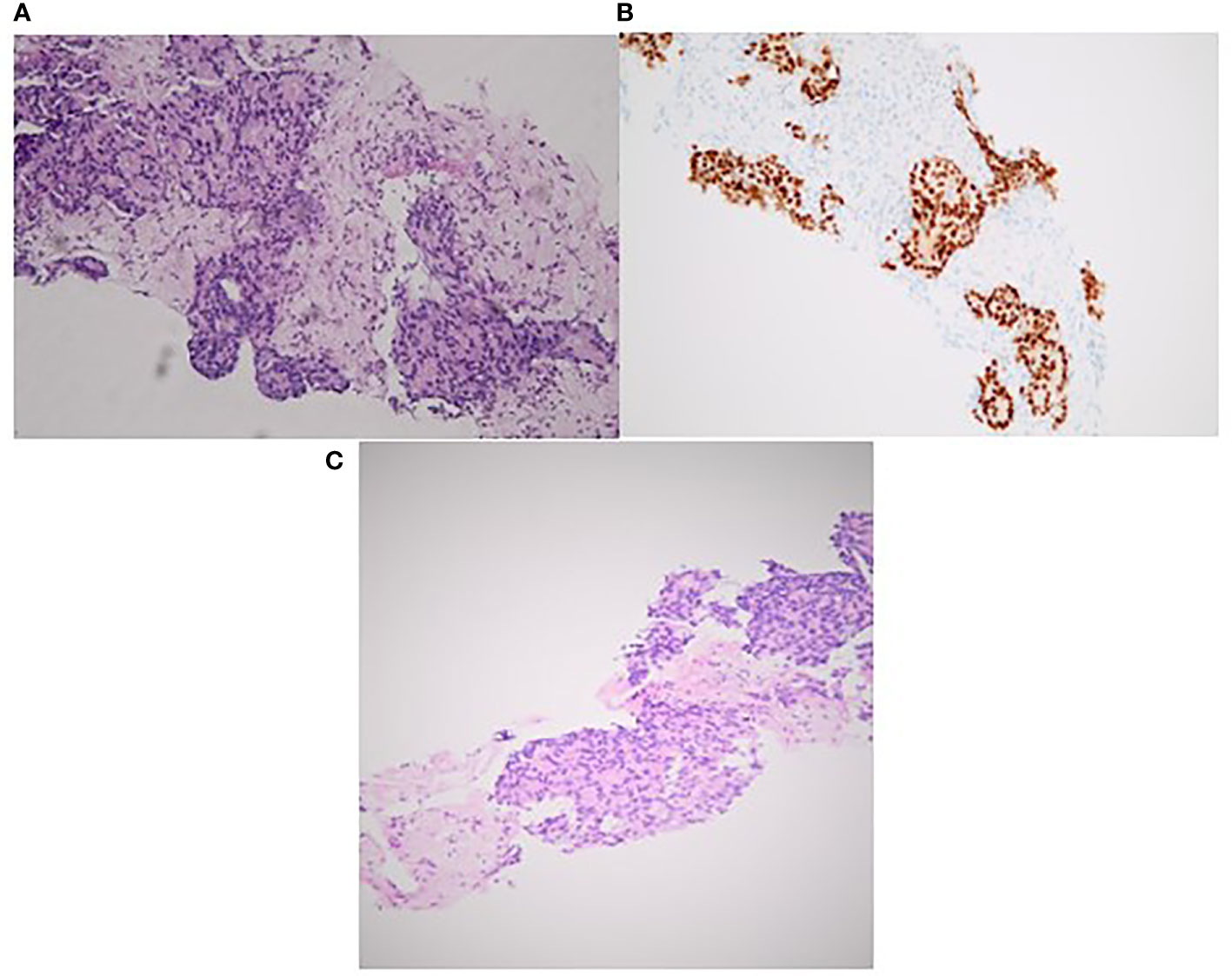 Figure 4 Dose distribution of the stereotactic body of radiotherapy (50 Gy in five fractions) of lesion (B) (coils) post radiofrequency of lesion (A).

We highlight in this report the feasibility of combining MDT to AA-P in a CRPC patient with isolated liver metastases. The first MDT (SBRT) allowed AA-P interruption during 9 months. At local resurgence, a new MDT strategy (surgery) allowed AA-P arrest and delayed the initiation of a new systemic treatment during 12 months.

We thus showed that, even in liver metastasis and CRPC settings, MDT was feasible and could be considered in order to interrupt systemic treatment and/or decrease cumulative toxicities related to the long use of AA-P. Furthermore, this strategy also delayed the initiation of chemotherapy that, in this case, appeared poorly efficient and that in other patient cases could not be appropriate (low-volume disease in the elderly population, in which docetaxel could deteriorate life quality).

This case highlights the feasibility of combining MDT to AA-P in a CRPC patient with liver metastases and the subsequent possibility to interrupt temporary systemic treatment. Two other options could have been proposed in this patient: the first one was to consider only AA until progression, as recommended by guidelines, and the second one was to continue AA after the first MDT. We do not know whether these options could have led to similar or superior outcomes for our patient. The impact of intermittent AA-P is also not known as no clinical trial has evaluated this strategy. Another limitation is that we mainly based on PSA evolution to decide the MDT strategy or AA-P interruption; further biomarker or imaging tools are needed to correctly define a real oligometastatic status (9–11).

To our knowledge, there are only 10 case reports focusing on the efficacy of MDT in isolated non-lymph-node visceral metastatic lesions (three patients with liver lesions, one patient with cerebral lesions, three patients with testicular lesions, two patients with lung lesions, one patient with testicular and cerebral lesions). MDT consisted in surgical resection for these patients (Table 1) (11–20). The radical management of isolated metastases resulted in all these patients in a decrease of PSA; the PFS was equal or superior to 1 year in six patients (and not available in two patients), and OS reached 2 years in four patients (not available in three patients). 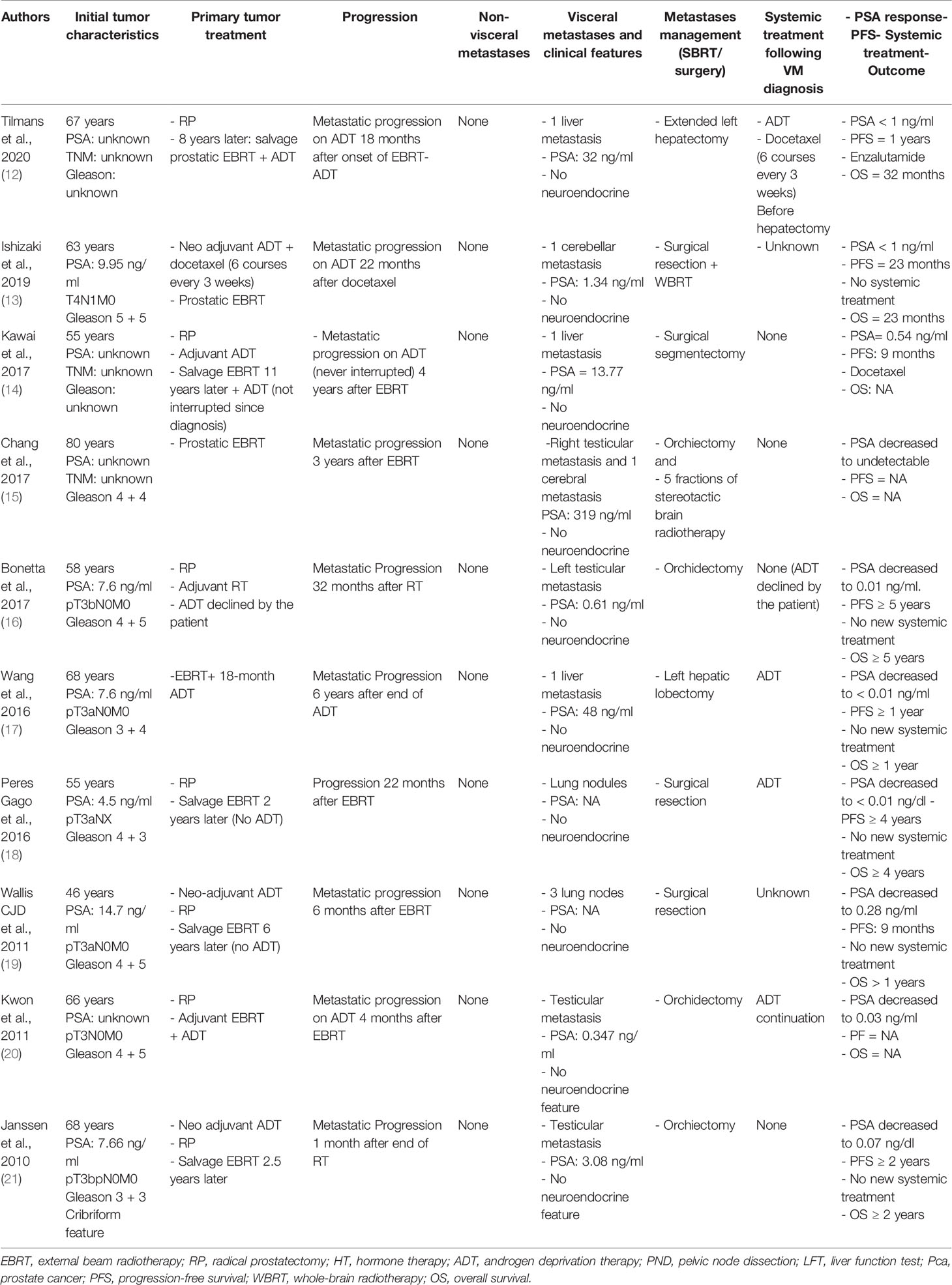 Written informed consent was obtained from the individual(s)’ and minor(s)’ legal guardian/next of kin, for the publication of any potentially identifiable images or data included in this article.

Copyright © 2021 Yeo, Hendrix, Confente, Christian, Mansvelt, Pairet and Seront. This is an open-access article distributed under the terms of the Creative Commons Attribution License (CC BY). The use, distribution or reproduction in other forums is permitted, provided the original author(s) and the copyright owner(s) are credited and that the original publication in this journal is cited, in accordance with accepted academic practice. No use, distribution or reproduction is permitted which does not comply with these terms.