Is There Another Posterior Approach for Presacral Tumors Besides the Kraske Procedure? — A Study on the Feasibility and Safety of Surgical Resection of Primary Presacral Tumors via Transsacrococcygeal Transverse Incision

Background: The aim of the present study was to explore the feasibility and safety of the surgical resection of presacral tumors via a transsacrococcygeal transverse incision.

Methods: The clinical data and prognoses of patients with presacral tumors who underwent surgery at the Chinese People’s Liberation Army (PLA) General Hospital between January 2009 and December 2018 were retrospectively reviewed and analyzed.

Results: A total of 110 patients with presacral tumors were included in this study, including 82 female patients and 28 male patients, with a female-to-male ratio of 2.9:1. A posterior approach (transsacrococcygeal transverse incision) was utilized in 105 patients, an anterior approach (transabdominal excision) was utilized in 1 patient, and a combined (posterior plus anterior) approach was utilized in 4 patients. The mean tumor size was 8.72 ± 4.28 cm. More than half of the patients (n=59/110) with presacral tumors were asymptomatic. Twenty-six pathological types were observed in our study, including 97 benign lesions and 13 malignant lesions. The intraoperative complication rate was 42.7% (n=47/110), whereas the postoperative morbidity rate was 3.6% (n=4/110). The length of hospital stay for patients treated with the posterior approach was shorter than that of patients treated with the anterior and combined approaches. After a mean follow-up of 90.13 ± 31.22 months, 11 patients had local presacral tumor recurrence, and 1 patient had distant metastasis, with a combined recurrence rate of 10.9% (n=12/110).

Conclusions: The surgical resection of primary presacral tumors via a transsacrococcygeal transverse incision is feasible and safe, with acceptable oncological therapeutic outcomes and a low postoperative morbidity rate, making it worth popularizing in clinical practice.

Complete surgical resection is the gold standard and most effective treatment for presacral tumors (4–6). The presacral space is a potential space with complex adjacent tissue structures, which makes surgery difficult to perform (7). To date, the surgical approaches to resect presacral tumors that have been reported in the literature include anterior (abdominal incision), posterior (sacrococcygeal incision), and combined anterior+posterior approaches, as well as laparoscopic surgery (8, 9). Among most of published studies (7, 10–14), posterior approaches are the most common.

All patients had to undergo abdominal and pelvic computed tomography (CT) scans after admission; when necessary, pelvic magnetic resonance imaging (MRI) was performed. Before surgery, the sacral levels of the superior margin of the presacral tumors were obtained by evaluating the sagittal CT or MRI scans of each patient.

After general anesthesia, patients were placed in the prone jack-knife position with the buttocks spread. Then, a transverse incision was made (incision length: approximately 10 cm) one cm below the coccygeal tip. The anococcygeal ligament was cut to obtain access to the presacral space. When necessary, the coccyx was resected. When the tumor was large, vertebrae below the S2 vertebra were resected to expose the lesions. Then, the presacral tumor was meticulously separated from adjacent normal tissues with careful protection of the rectum. When no clear boundary was noted between the presacral tumor and the rectum, rectal palpation with the left hand could be used to indicate the boundary between the presacral tumor and the rectum to better protect the rectum. If rectal injury was unavoidable, small rectal injuries could be resolved by rectal repair. When the rectal injury was large and the patient’s general condition was poor, a prophylactic colostomy was performed. After the tumor was removed, the surgical field was rinsed completely. Then, a drainage tube with a negative-pressure aspiration device was placed in the surgical field. Finally, the surgical incision was sutured (Figures 1, 2).

The operative time was calculated from incision of the skin to suturing of the skin.

According to Aubert M et al. (10), the intraoperative complications mainly include tumor perforation, presacral bleeding, and rectal and bladder perforation. Postoperative morbidity was defined as any surgical or medical complication occurring during the hospital stay or within 30 days after surgery and was mainly represented by wound and pelvic abscesses. Complications were recorded using the Clavien–Dindo classification (19).

Follow-up was performed by telephone or outpatient visits as follows: every 3 months in the first year, every six months in the second and third years, and yearly thereafter. A pelvic CT scan was required during follow-up, and when necessary, MRI was added to make a clear diagnosis. The beginning of follow-up was the day when the surgery was performed. The last follow-up time was October 2021.

SPSS 20.0 for Windows (Chicago, IL) was utilized to perform data processing. Numerical data are presented as the mean ± standard deviation (SD), and categorical data are presented as absolute numbers and percentages. Student’s t test was used to compare quantitative data, and Pearson’s chi-squared test was used to compare categorical data. A P value < 0.05 was considered to be statistically significant.

After searching our prospective database, 187 patients with presacral tumors were initially identified. According to the inclusion and exclusion criteria discussed in the Methods section, 110 patients were ultimately included in this study.

In this study, patients with presacral tumors were younger, with a mean age of 40.0 ± 13.2 (range, 12-69) years at diagnosis. In our study, presacral tumors also showed a female predominance; there were 82 female patients and 28 male patients, with a female-to-male ratio of 2.9:1. All patients (n=110) underwent abdominal and pelvic CT scans before surgery; moreover, 40% (n=44) underwent MRI scans. The demographic and clinical data of the study are summarized in Table 1.

Table 1 Demographic and clinical data of the study.

In our study, more than half of the patients (n=59/110) with presacral tumors were asymptomatic, and the tumors were discovered incidentally during routine health examinations or testing for other diseases. The symptoms due to the presacral tumors varied and are summarized in Table 2.

Table 2 Symptoms observed in the study.

In this study, 110 patients presented 26 pathological types, including 97 benign lesions and 13 malignant lesions. The pathological results are summarized in Table 3. 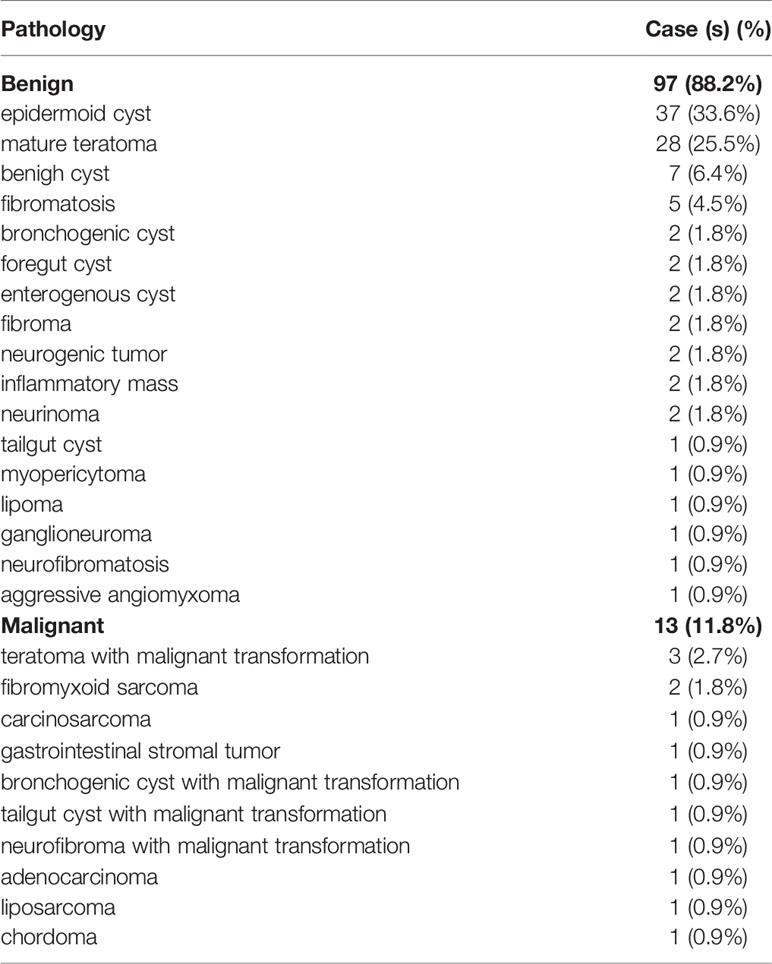 Table 3 Pathologies observed in the study.

Table 4 Clinical data of the five anterior and combined approaches.

All the other patients had uneventful recoveries and were safely discharged; no perioperative deaths occurred.

Two patients with presacral adenocarcinomas and presacral stromal tumors in our series were lost to follow-up after the operation. The mean follow-up time was 90.13 ± 31.22 (range, 35-155) months.

Here, we report our experience with the surgical resection of primary presacral tumors via a transsacrococcygeal transverse incision in terms of the surgical technique and long-term follow-up outcomes in a large sample.

An obvious concern is that the entire transsacrococcygeal transverse incision is close to the anus, which is prone to infection. To avoid wound infection, we employ the following practice: first, a drainage tube with a negative-pressure aspiration device is placed in the surgical site to fully drain the surgical site (Figure 2); second, the dressings are changed in a timely manner; and third, antibiotics are administered appropriately (anti-anaerobic bacterial drugs (metronidazole or ornidazole, etc.) + third-generation cephalosporins (ceftazidime or ceftriaxone, etc.). In our series, wound infection occurred in 1.8% of the patients (n=2/110). After conservative treatment, the 2 patients achieved complete recovery.

During the operation, we inevitably encountered bursting of the cyst wall, which led to spillover of the bean curd residue-like (sebaceous) material in the cyst. The spillover can contaminate the surgical field. However, if we removed the cyst wall completely, rinsed the contaminant out of the surgical field completely, kept the drainage tube unblocked and changed the dressings regularly, the surgical incision could heal well, and tumor recurrence could be avoided. However, when the presacral cystic lesions were large, we intentionally elicited cystic fluids to reduce the tumor volume, which made it easy to treat the presacral lesions completely.

Surgeons who perform presacral tumor operations must be well aware that during surgery, they can face a difficult problem: uncontrolled intraoperative blood exudation from the presacral venous plexus. Uncontrolled intraoperative hemorrhage occurred in 2 patients in our study. To address this difficult problem, a long piece of packing gauze was temporarily placed in the presacral space to achieve hemostasis. Seventy-two hours later, when the hemorrhaging stopped, the gauze was removed, and the incision was sutured. Based on our experience, if properly handled, the use of gauze packing to stop uncontrolled presacral venous plexus blood exudation does not increase the rate of incisional infection. In our series, the surgical incisions of the 2 patients who were treated with gauze packing to stop presacral bleeding recovered well. However, more cases are needed to validate our research.

To better expose the surgical site, we occasionally had to resect the coccyx or even partially resect the sacrum. According to Shafik, removal of the coccyx and disconnection of the anococcygeal ligament do not affect the function of the anus (31). In our study, when necessary, a transsacrococcygeal transverse incision allowed the surgeon to dissect the coccyx, which helped to obtain sufficient exposure. In addition, removal of the coccyx reduces the recurrence rate because the totipotential cellular remnants in the coccyx are removed (32). However, other studies (2, 33) demonstrated that coccygectomy increased the mortality rate. When the presacral tumor is large, the sacrum (highest S3 level) can be removed to facilitate excision of the sacral tumor. However, the more sacrum that was removed, the more complications were observed after surgery (34). Previous studies have shown that to maintain normal urinary and fecal function, at least one or both S3 nerves must be preserved (27, 35). In our study of 110 surgeries, coccygectomy was performed in 35.5% of the patients (n=39/110), and coccygectomy plus partial sacrectomy was performed in 4.5% of the patients (n=5/110) (Table 1). Therefore, we suggest that if coccygectomy and sacrectomy facilitate the en bloc resection of presacral masses, the coccyx and sacrum should not be preserved.

The reported rates of presacral tumor recurrence after surgery in previous studies were 7.4% (10), 10.8% (11), 15.6% (24) and 20.4% (27). In our study, the recurrence rate was 10.9% (n=12/110). The lower postoperative morbidity rate, comparable intraoperative complication rate and recurrence rate in our study confirmed the feasibility and safety of the surgical resection of presacral tumors via a transsacrococcygeal transverse incision.

The length of hospital stay for the posterior approach was shorter than that for the anterior and combined approaches (13.3 ± 6.14 d vs. 19.0 ± 11.8 d), but the difference between the two groups was not statistically significant (P=0.056). We think this finding was correlated with the small number of patients treated with an anterior or combined approach, and more efforts are needed to further confirm the difference in the length of hospital stay between the two groups.

In conclusion, the surgical resection of primary presacral tumors via a transsacrococcygeal transverse incision is feasible and safe, with acceptable oncological therapeutic outcomes and a low postoperative morbidity rate, making it worth popularizing in clinical practice.

The studies involving human participants were reviewed and approved by the ethics committee of the Chinese PLA General Hospital. The patients/participants provided their written informed consent to participate in this study.

XZ and SZ conceived, designed the study and drafted the article. NL organized the database and performed the statistical analysis. PL and LC revised the paper critically and approved the final version of the paper. All authors contributed to manuscript revision, read, and approved the submitted version.

Citation: Zhao X, Zhou S, Liu N, Li P and Chen L (2022) Is There Another Posterior Approach for Presacral Tumors Besides the Kraske Procedure? — A Study on the Feasibility and Safety of Surgical Resection of Primary Presacral Tumors via Transsacrococcygeal Transverse Incision. Front. Oncol. 12:892027. doi: 10.3389/fonc.2022.892027

Copyright © 2022 Zhao, Zhou, Liu, Li and Chen. This is an open-access article distributed under the terms of the Creative Commons Attribution License (CC BY). The use, distribution or reproduction in other forums is permitted, provided the original author(s) and the copyright owner(s) are credited and that the original publication in this journal is cited, in accordance with accepted academic practice. No use, distribution or reproduction is permitted which does not comply with these terms.