A Nomogram Model to Predict Early Recurrence of Patients With Intrahepatic Cholangiocarcinoma for Adjuvant Chemotherapy Guidance: A Multi-Institutional Analysis

Background: The influence of different postoperative recurrence times on the efficacy of adjuvant chemotherapy (ACT) for intrahepatic cholangiocarcinoma (ICC) remains unclear. This study aimed to investigate the independent risk factors and establish a nomogram prediction model of early recurrence (recurrence within 1 year) to screen patients with ICC for ACT.

Methods: Data from 310 ICC patients who underwent radical resection between 2010 and 2018 at eight Chinese tertiary hospitals were used to analyze the risk factors and establish a nomogram model to predict early recurrence. External validation was conducted on 134 patients at the other two Chinese tertiary hospitals. Overall survival (OS) and relapse-free survival (RFS) were estimated by the Kaplan–Meier method. Multivariate analysis was conducted to identify independent risk factors for prognosis. A logistic regression model was used to screen independent risk variables for early recurrence. A nomogram model was established based on the above independent risk variables to predict early recurrence.

Conclusion: The nomogram model established based on the independent risk variables of early recurrence for curatively resected ICC patients has a good prediction ability and can be used to screen patients who benefited from ACT.

Intrahepatic cholangiocarcinoma (ICC) is the second most common primary liver cancer and accounts for about 10% to 15% (1, 2). Over the past two decades, the incidence of ICC has been increasing throughout the world, also accompanied by an increase in mortality (3, 4). At present, surgical resection is considered the only curative treatment for ICC patients, but only a small fraction (15%) of patients are eligible for surgery (5). The occurrence of postoperative recurrence and metastasis leads to poor survival even after curative hepatectomy, with a 3-year relapse-free survival (RFS) rate below 30% and a 5-year overall survival (OS) rate ranging from 20% to 40% (6–8). Therefore, identifying patients who are at risk for early recurrence is important to construct individualized surveillance strategies for ICC patients after radical resection. Recently, more and more scholars are concerned about the risk factors of early recurrence, while the definition of early recurrence is different because definitive guidelines do not exist (9–11).

Currently, the effect of adjuvant chemotherapy (ACT) on the prognosis of ICC patients is still controversial (12–14), although studies have proved that ACT can improve the prognosis (15, 16). Because many factors may affect the efficacy of ACT, it is very important to screen potential patients who could benefit from ACT. Few published studies focused on the recurrence time of ICC patients accompanied by ACT or not, which to some extent could help choose patient groups that are suitable for ACT. This study aimed to investigate the independent risk factors and establish a nomogram model to predict early recurrence to screen ICC patients for ACT.

According to previous studies (10, 17, 18), a postoperative recurrence within 1 year was defined as early recurrence, while a recurrence of >1 year was a late recurrence. The inclusion criteria were as follows (1): patients underwent radical resection and the margin status of the initial resection was microscopically negative (R0) (2); patients had a detailed postoperative recurrence record (3); patients received ACT with complete and systematic regimens; and (4) patients without a history of other malignancies. Exclusion criteria were as follows (1): hilar cholangiocarcinoma invading the liver (2); mixed cholangiocarcinoma-hepatocellular carcinoma (3); incomplete clinical data; and (4) patients died within 30 days after surgery.

The Regimens and Indications of ACT

Follow-up was performed in outpatient or telephone. Liver function, tumor biomarkers, ultrasound, contrast-enhanced CT, or MRI examinations were reviewed every 2 to 3 months within 1 year after surgery, and then once every 3–6 months for more than 1 year after surgery. Postoperative recurrence was defined as the discovery of new lesions by two or more imaging examinations. All included patients were followed up through December 2020.

Development and Assessment of the Nomogram

A total of 444 ICC patients were finally included in the study; 310 patients from 8 medical centers were included as the training set, and 134 patients from the Oriental Hepatobiliary Hospital Affiliated to Naval Medical University and West China Hospital of Sichuan University were included as the testing set. R software version 3.6.1 (http://www.r-project.org/) was used to produce a nomogram prediction model based on the independent risk variables for early recurrence of ICC patients after surgery. The performance of the nomogram was evaluated based on the concordance index (C-index), calibration plot, and decision curve analysis (DCA). DCA was performed by calculating the benefit of a series of threshold probabilities and was conducted to evaluate the clinical practicability of the nomogram (19). 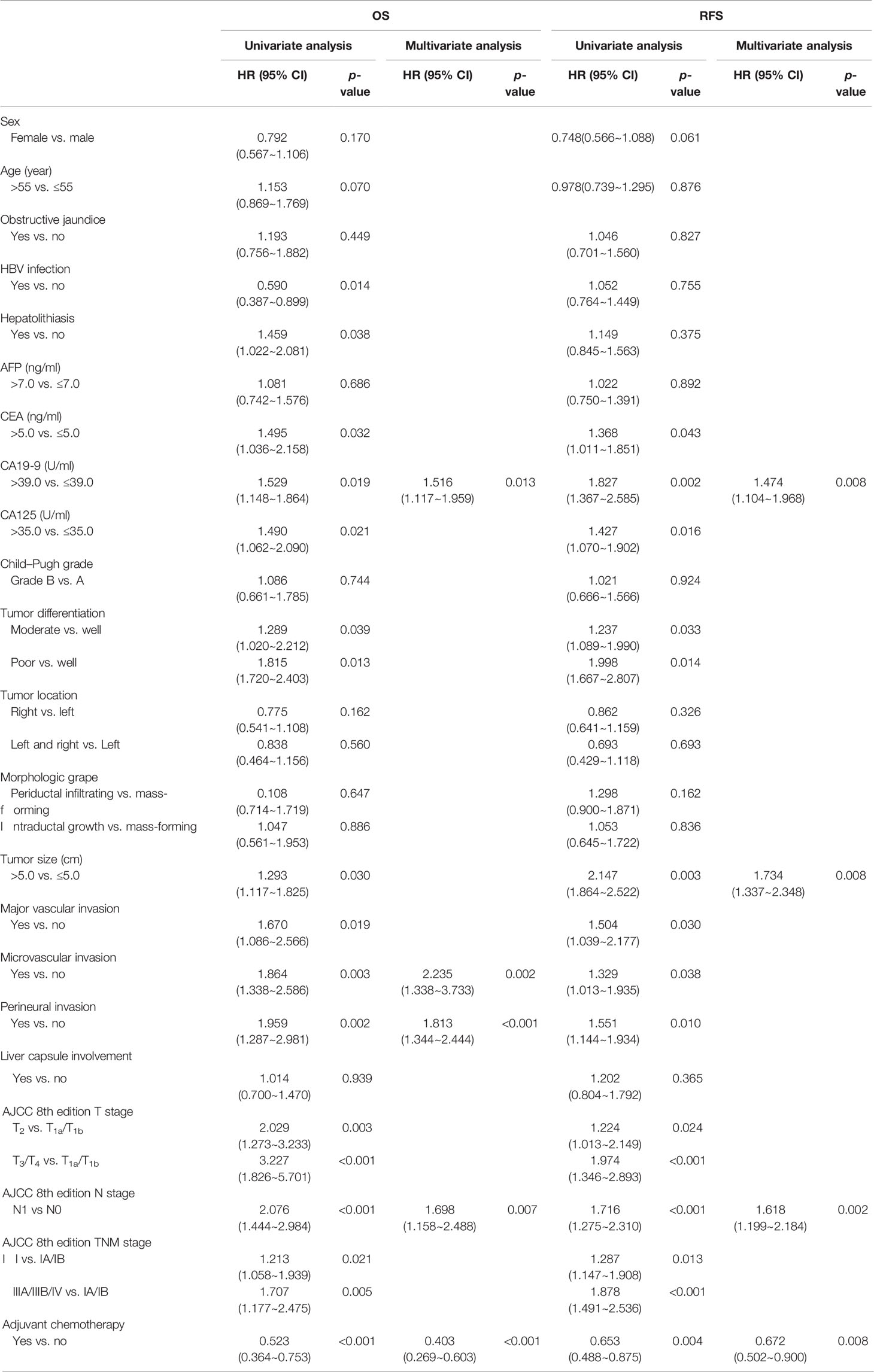 Table 1 Univariate and multivariate analyses of prognosis for ICC after radical resection.

Similarly, the results also showed that ACT could be beneficial to the late recurrence group for OS and RFS in the testing set (Figures 2G, H, p < 0.01), while the OS and RFS of ICC patients with early recurrence were not significantly improved after receiving ACT (Figure 2E, F, p > 0.05). Thus, the results showed that ACT can improve the prognosis for ICC patients with late recurrence significantly.

Development of the Nomogram Prediction Model

CA19-9, tumor size, major vascular invasion, microvascular invasion, and N stage were the independent risk factors for early recurrence of ICC patients after radical resection. A nomogram to predict early recurrence was established based on the above independent risk factors. Detailed results of the logistic regression are shown on the right-hand side of Table 2. The nomogram is shown in Figure 3, and an online calculator for the nomogram model was established, which is available at https://doczj.shinyapps.io/icc_early. 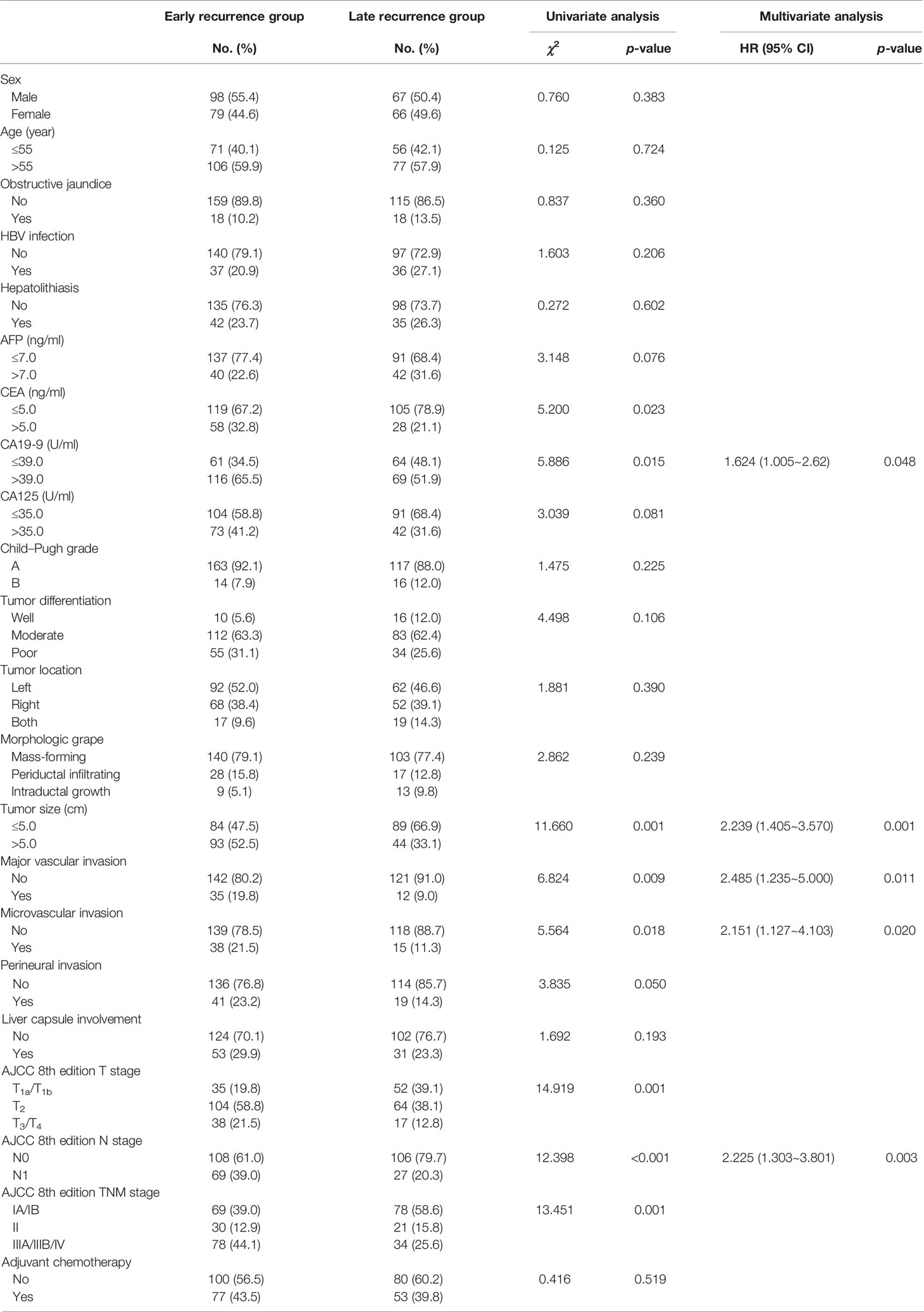 Table 2 Comparison of clinicopathologic characteristics of early recurrence and late recurrence for ICC after radical resection. 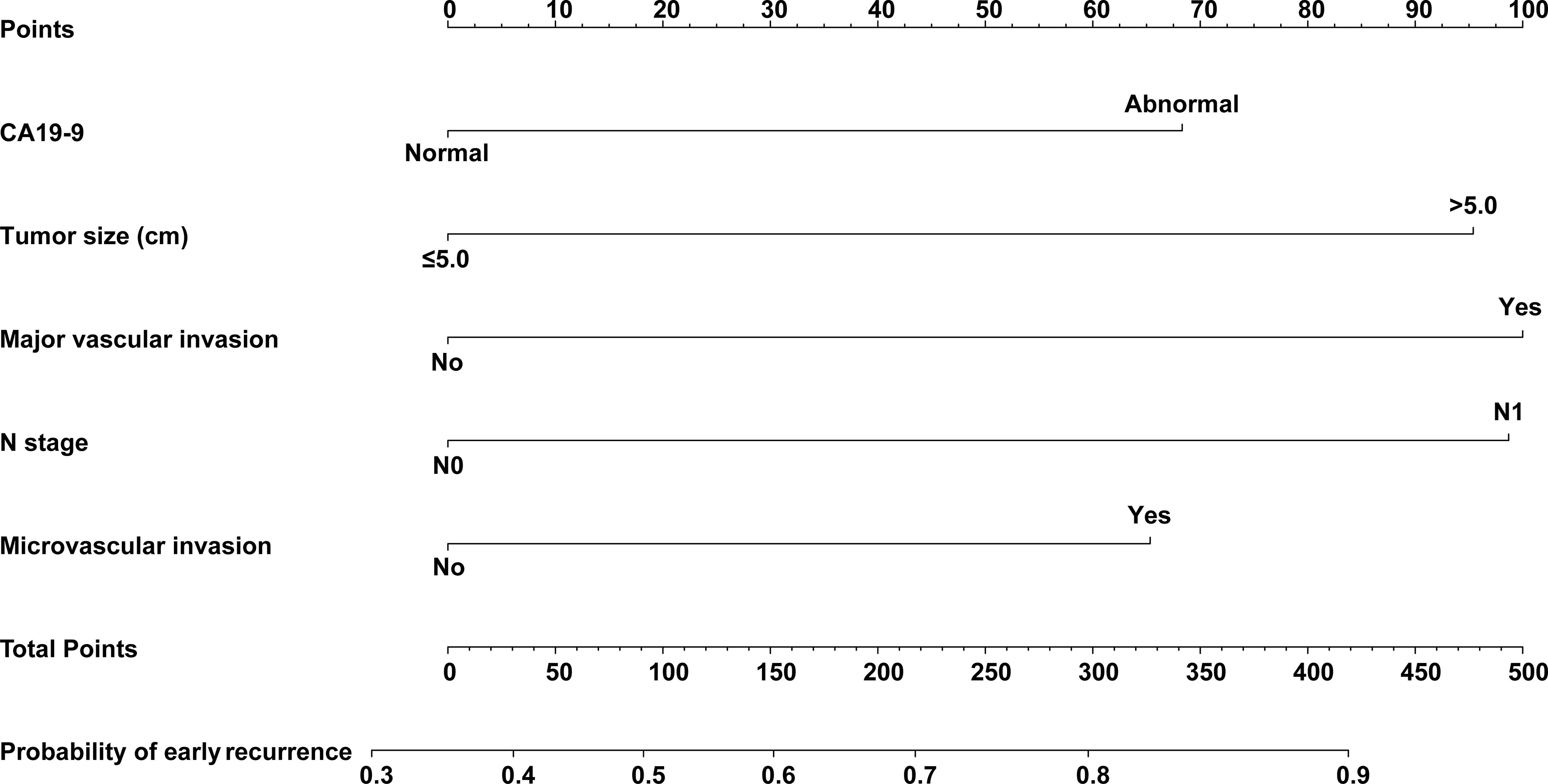 Assessment of the Nomogram Prediction Model

The C-index of the nomogram model was 0.777 (95% CI: 0.713~0.841) and 0.716 (95% CI: 0.604~0.828) in the training and testing sets, respectively. The calibration plots are shown in Figures 4A, B, which showed the prediction results were more consistent with the actual results. In addition, DCAs are shown in Figures 4C, D, which showed that the predictive ability of the nomogram model was better than TNM staging in the training set and testing set. 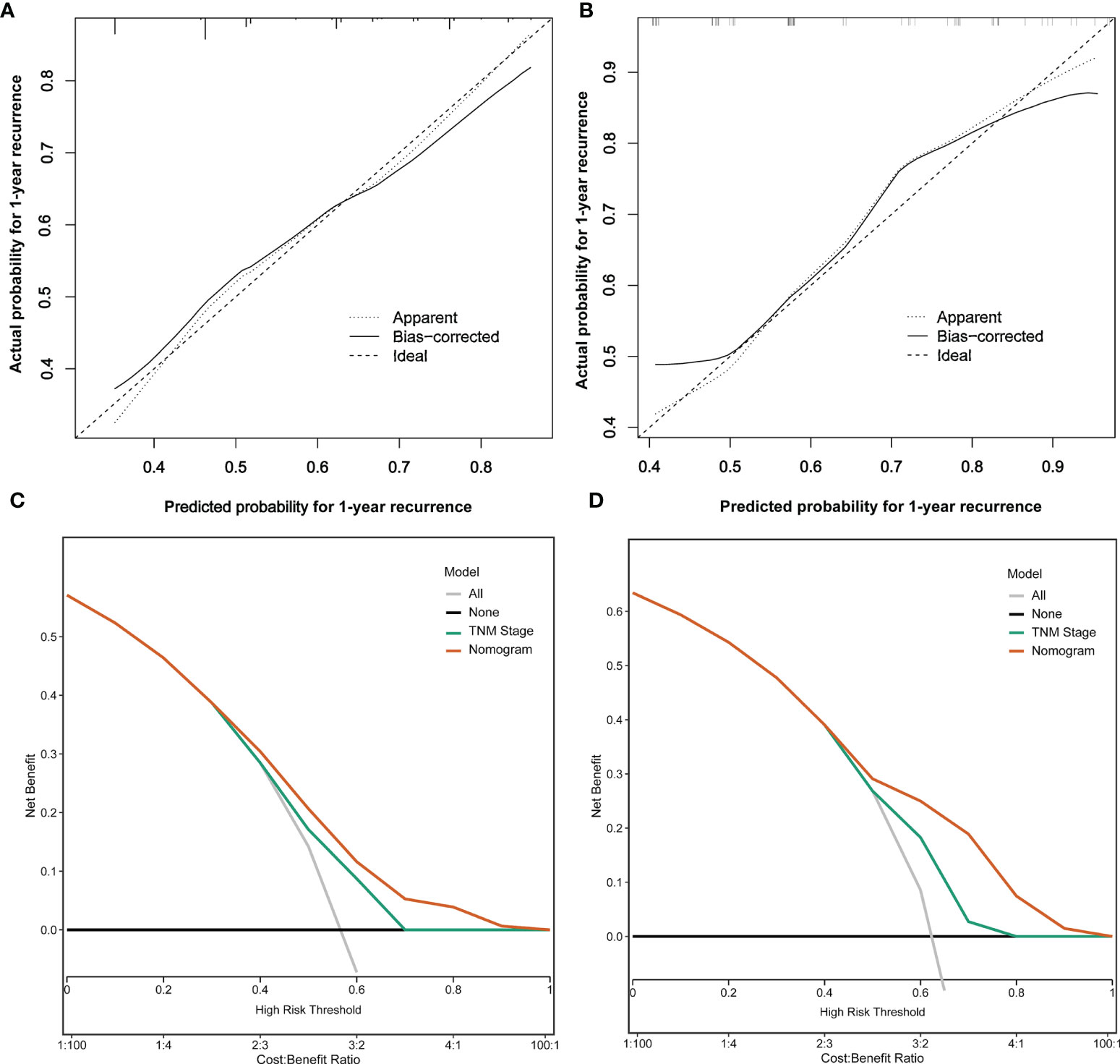 To our knowledge, this study is the first to establish a nomogram prediction model for early recurrence including the above independent risk variables. The C-index of the nomogram model was 0.777 and 0.716 in the training and testing sets, respectively. The calibration plots showed that the prediction results were more consistent with the actual results, and DCAs showed that the predictive ability of the nomogram model was better than TNM staging in the training and testing sets. Different from our nomogram model, many scholars (21, 30, 31) developed radiomics nomograms by using the radiomics signature and other clinicopathological characteristics to predict the early recurrence of ICC after surgery, but the inclusion of radiomics signature also brought certain difficulties to clinical applications. Jeong et al. (32) established a nomogram model to allow precise estimation of the risk of 1-, 3-, and 5-year RFS for ICC after resection by the combined Cox and logistic ranking system based on 10 and 11 covariates; however, it could not evaluate and predict early recurrence and was complex in the application despite its good predictive ability. Yu et al. (33) established a nomogram for 1-, 3-, and 5-year RFS based on tumor size, tumor number, direct invasion, and triosephosphate isomerase (TPI1), while they did not provide treatment decisions for postoperative early and late recurrence, although they showed the prognostic model was accurate in predicting recurrence for ICC patients. Therefore, our nomogram model has better clinical practicability and applicability for early recurrence of ICC patients by using the online calculator.

However, several limitations must be acknowledged in this study. It is difficult to avoid selection bias in the retrospective design and the different definitions of early recurrence. In addition, the reasons why ICC patients with early recurrence cannot benefit from ACT have not been further analyzed. Accordingly, we recommend that more patients with ICC after radical resection from other medical centers could be collected in future studies to validate our results, and the molecular biomarkers should be added into the study to improve the predictive ability of the nomogram model, which can provide decision support for ACT of ICC patients more effectively.

In summary, this study retrospectively analyzed 444 patients with ICC after radical resection and developed a nomogram prediction model based on the risk factors of early recurrence, including CA19-9, tumor size, major vascular invasion, microvascular invasion, and N stage with a good predictive ability, which can be used to screen patients with ICC who benefit from ACT effectively. We expect that the nomogram model can help to screen appropriate ICC patients who could benefit from ACT and achieve widespread clinical application in the future.

The studies involving human participants were reviewed and approved by the ethics committee of Xinhua Hospital Affiliated to Shanghai Jiaotong University School of Medicine (No. XHEC-JDYXY-2018-002), Shanghai, China. The patients/participants provided their written informed consent to participate in this study.

Copyright © 2022 Li, Zhang, Chen, Song, Qiu, Mao, Wu, He, Cheng, Zhai, Li, Zhang, Geng and Tang. This is an open-access article distributed under the terms of the Creative Commons Attribution License (CC BY). The use, distribution or reproduction in other forums is permitted, provided the original author(s) and the copyright owner(s) are credited and that the original publication in this journal is cited, in accordance with accepted academic practice. No use, distribution or reproduction is permitted which does not comply with these terms.