Gastrointestinal (GI) involvement of plasma cell neoplasms is extremely rare. Herein, we describe the case of a 74-year-old Caucasian woman who came to our attention with abdominal pain, food vomiting, and weight loss of 10 kg over 1 year. A computed tomography scan of the abdomen revealed circumferential thickening of terminal ileum, for which the patient underwent an urgent 20-cm-long ileal resection. Histopathological and immunophenotypic analysis revealed a plasma cell neoplasm of the ileum. Subsequent investigations found a serum monoclonal immunoglobulin A component, an osteolytic lesion of the left jaw, and a clonal bone marrow plasma cell infiltrate carrying 1q21 amplification. Given the final diagnosis of plasma cell myeloma (PCM), the patient underwent a VMD (bortezomib, melphalan, and dexamethasone) chemotherapy regimen, achieving a complete remission after a 12-month treatment. For disease relapse, two further chemotherapy regimens were later attempted. At the last follow-up 4 years after the diagnosis, the patient is still alive. This case draws attention to the extramedullary presentation of plasma cell neoplasms, even if rare, as a prompt diagnosis seems to result in a better prognosis. In addition, it highlights the relevance of a multidisciplinary approach, involving gastroenterologists, hematologists, and pathologists, to the diagnosis and management of these neoplasms.

Plasma cell neoplasms are a clinically heterogeneous group of clonal disorders of terminally differentiated B cells, often characterized by the secretion of monoclonal immunoglobulins (Ig), and include plasma cell myeloma (PCM), solitary plasmacytoma of bone, and extraosseous plasmacytoma (1).

PCM is the plasma cell neoplasm with the highest clinical burden and possibly the worst outcome, and its diagnosis is based on the detection of more than 10% of clonal bone marrow plasma cells or biopsy-proven bony or extramedullary plasmacytoma, and any one or more of the myeloma defining events, namely, CRAB (hypercalcemia, renal insufficiency, anemia, and bone lesions) features and biomarkers of malignancy (specifically more than 60% clonal plasma cells on bone marrow examination, serum involved/uninvolved free light chain ratio of 100 or greater, and more than one focal lesion on magnetic resonance) (2).

The bone is typically involved in PCM, but other organs may be infiltrated as well (1). Gastrointestinal (GI) involvement of plasma cell neoplasms seems infrequent, generally as a part of a multisystemic involvement (3), and it is described by few reports and a single large series (4–8). The liver seems to be the organ of the GI tract most affected, whereas stomach or intestine is far less reported as disease sites. Interestingly, GI involvement appears to be associated with adverse biological features (e.g., high lactate dehydrogenase levels, high risk karyotype, and plasmablastic cytology) and an aggressive behavior (4, 9).

Herein, we report a case of PCM presenting with ileal obstruction and diagnosed following emergency surgery.

A 74-year-old Caucasian woman referred to our centre in September 2017 for abdominal pain, food vomiting, and weight loss of 10 kg over 1 year. She had a medical history of arterial hypertension, hypercholesterolemia, obesity (with a body mass index of 31.2 and a body surface area of 1.89), primary osteoporosis, chronic Helicobacter pylori-unrelated gastritis, and smoking habit. Medications taken at home were antihypertensive drugs, hypolipidemic agents, and proton pump inhibitors. For osteoporosis, the patient was on calcium and vitamin D supplementation therapy. A previous exposure to radiation and chemical agents was excluded.

A computed tomography (CT) scan of the abdomen showed a small bowel circumferential wall thickening (Figure 1), for which the patient underwent an urgent ileal resection by laparoscopy. The surgical specimen consisted of a 20-cm-long segment of terminal ileum. At gross examination, the ileal wall displayed a 3-cm-long ulcerated lesion, determining a stenosis of the bowel lumen and infiltrating the mesentery through the visceral wall.

Microscopic analysis of the specimen (Figure 2) revealed a dense trans-parietal pleomorphic proliferation of mature plasma cells, consisting of small to large and multinucleated elements, some with Russel or Dutcher bodies, with ulceration of the bowel mucosa and infiltration of the perivisceral adipose tissue. All those elements stained positive for CD56, CD79a, CD138, MUM1, IgA and showed monoclonal restriction for the kappa (κ) light chain of Ig. CD5, CD20, CD45/LCA, Cyclin-D1, IgD, IgG, and IgM tested all negative as well as immunostaining for human herpes virus 8 (HHV8) and in situ hybridization for Epstein–Barr virus (EBV). The proliferative index of the neoplastic population (Mib1/Ki67) was estimated at around 40%. A moderate number of CD3+ T lymphocytes were admixed to the plasma cell infiltrate. All the resected lymph nodes were spared, displaying reactive features. 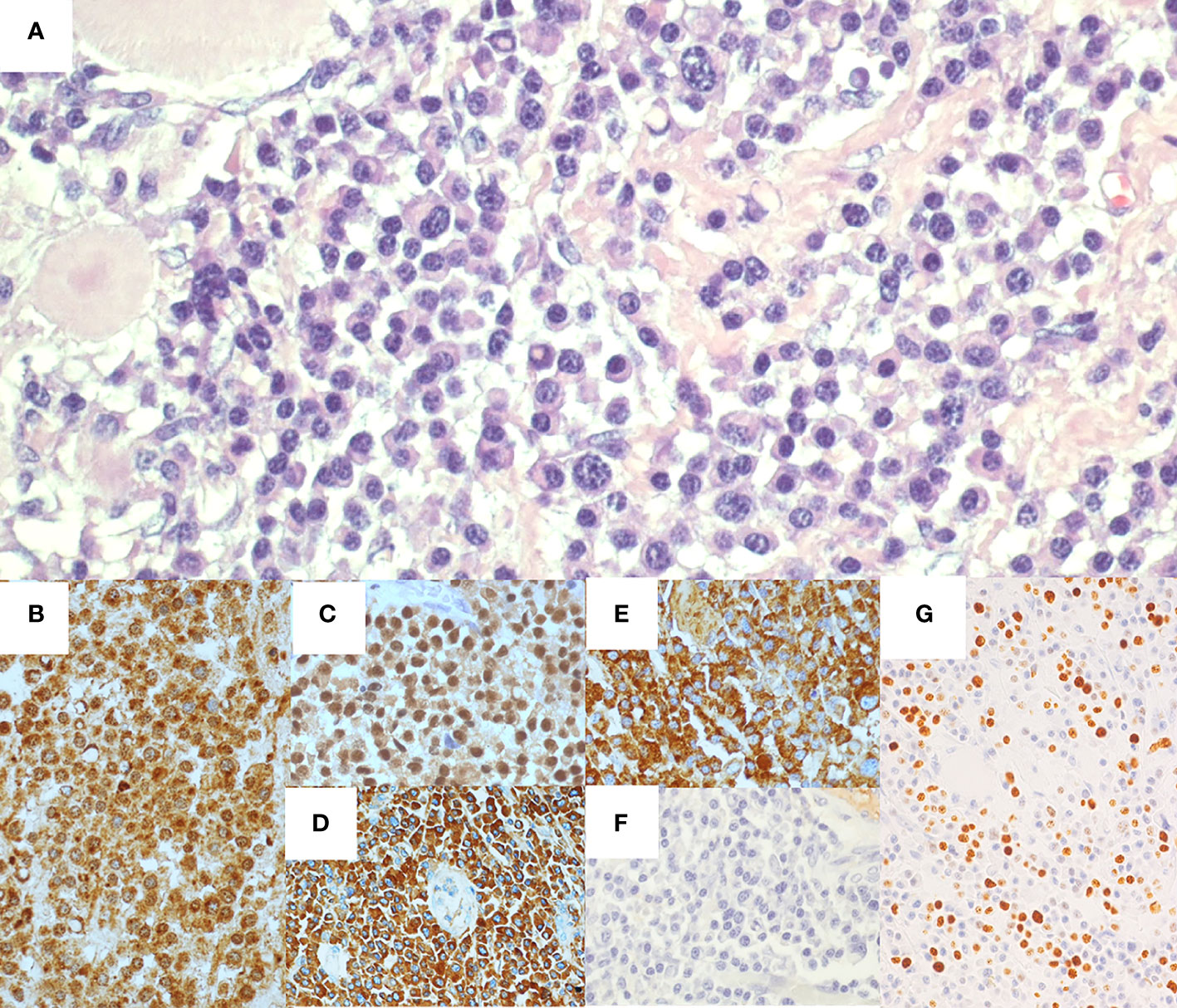 Laboratory investigations were all within the limits (Table 1), with the exception of the serological presence of a monoclonal IgA-κ component equal to 1.2 g/dl with uninvolved normal Ig (IgG, 790 mg/dl; IgA, 1,380 mg/dl; IgM, 250 mg/dl) and antinuclear antibody positivity. Moreover, microscopic analysis of the bone marrow biopsy (Figure 3) showed a clonal plasma cell infiltrate (15% of bone marrow cellularity), consisting of small- to medium-sized plasma cells with aberrant expression of CD56 and monoclonal restriction for κ light chain of Ig, without amyloid deposits. Fluorescence in situ hybridization analysis documented the presence of 1q21 amplification. 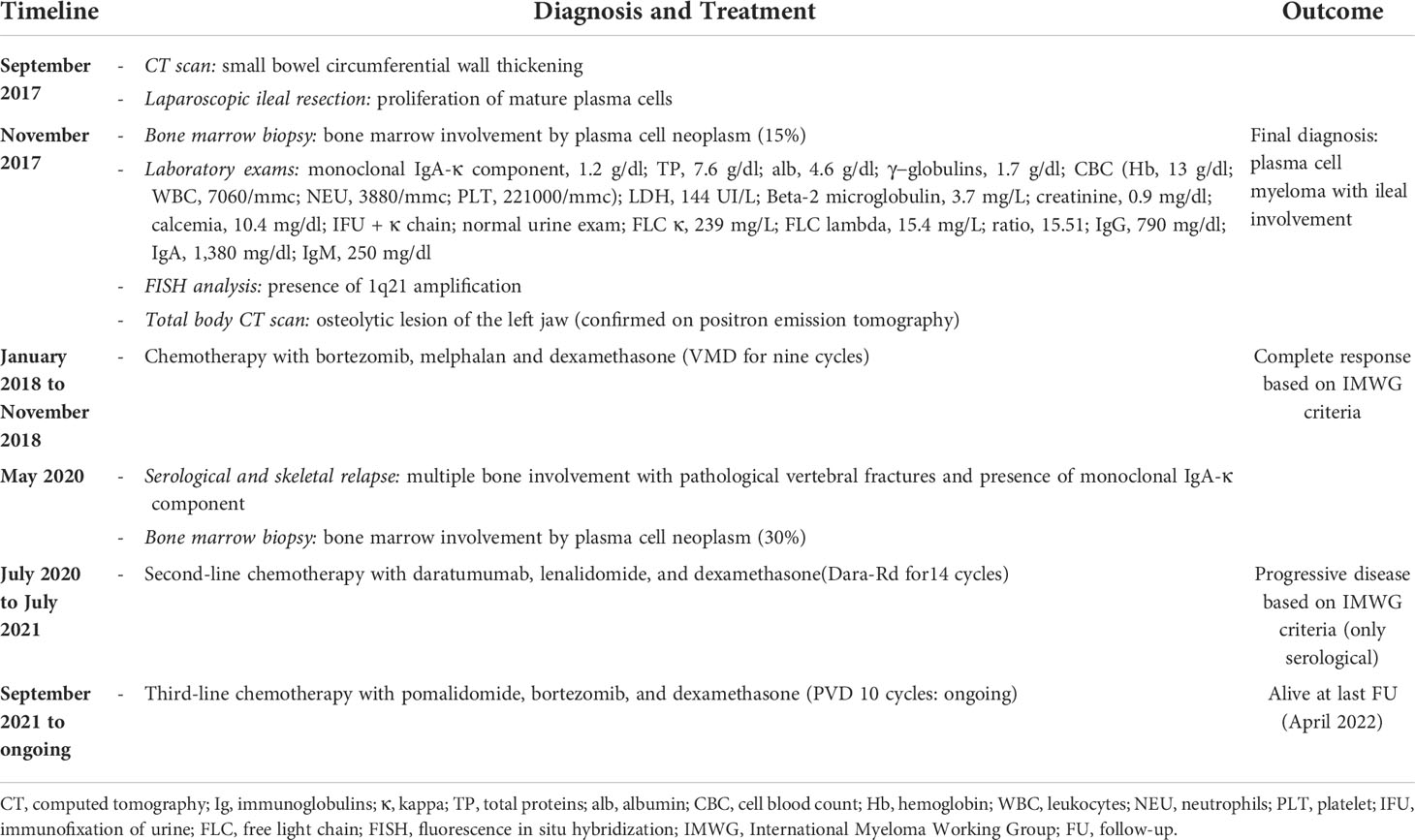 Table 1 Timeline of the disease and treatment.

Our final diagnosis was PCM with ileal involvement. Therefore, the patient received chemotherapy according to the VMD scheme (i.e., bortezomib, 1.3 mg/m2; melphalan, 0.12 mg/kg; and dexamethasone, 20 mg for nine cycles), achieving a complete remission in a 12-month period according to the International Myeloma Working Group consensus criteria (10). Thirty months later, a disease relapse was highlighted by the findings of increased monoclonal IgA-κ component, multiple lytic vertebral lesions showed by magnetic resonance imaging (MRI), and bone marrow plasma cell infiltration equal to 30%. Then, the patient underwent a second-line chemotherapy with Dara-Rd scheme (i.e., daratumumab, 16 mg/kg; lenalidomide, 5 mg per day; and dexamethasone, 20 mg for week) for 14 cycles achieving a partial remission. A third-line therapy was started on September 2021 due to only serological progressive disease without new lytic lesions based on PVD scheme (i.e., pomalidomide, 4 mg per day; bortezomib, 1.3 mg/m2; and dexamethasone, 40 mg per week). At the last follow-up, 4 years after the diagnosis, the patient received the 10th cycle of PVD reaching at least a partial response.

The clinical course of the patient is summarized in Table 1.

Plasma cell neoplasms are categorized into four groups: PCM (including smoldering and non-secretory myeloma and plasma cell leukemia) and plasmacytoma [including solitary plasmacytoma of bone and extraosseous plasmacytoma (EP)] (1). EP is rare representing only 5% of all plasma cell neoplasms and generally involves mucous membranes of airways or GI tract and only rarely parenchimatous organs (11, 12). It is more common in men, with a male-to-female ratio of 4:1 with a median patient age of 55 years at diagnosis (11, 12). The diagnosis of EP needs to exclude a systemic involvement by a PCM, and it is therefore a diagnosis of exclusion. Therefore, EP needs to be distinguished by extraosseous involvement by a PCM (1). In such case, the most frequently involved tissues are soft tissues, skin, lymph nodes, liver, spleen, and kidneys. Conversely, GI involvement by a PCM is very rare. It most commonly occurs in the small intestine, followed by stomach, whereas the involvement of esophagus and colon—especially in ileo-cecal region—is exceedingly rare (1, 4, 6, 7, 9). In the literature, very few cases of multiple myeloma primarily presented with GI involvement are reported (Table 2). GI involvement by PCM may occur with loss of appetite, bleeding, abdominal discomfort, or obstruction (4, 13, 14). In such cases, histopathological examination of tissue samples is needed to address the diagnosis of plasma cell neoplasms, whereas imaging (CT scan, MRI, and PET-CT) together with laboratory examination and bone marrow biopsy may confirm the presence of a systemic involvement (4).

This is indeed the case of our patient, in which the ileal involvement by a plasma cell neoplasm emerged after the development of GI symptoms such as abdominal pain, food vomiting, and weight loss of 10 kg over 1 year. The diagnosis of a GI involvement by PCM can be difficult from both a clinical and histopathological point of view, as it can mimic a carcinoma or lymphoma.

Our first diagnostic hypothesis, based on the patient’s age, clinical presentation, and CT finding of GI obstruction, was intestinal neoplasm. Given the ileal localization, a neuroendocrine tumor, an intestinal lymphoma, or an adenocarcinoma was highly suspected. The subsequent urgent ileal resection and histological examination led to the more unusual diagnosis of plasma cell neoplasia.

This case required a histopathological complex differential diagnosis between plasma cell neoplasms and lymphomas with predominant plasma cell differentiation and possible GI involvement, namely, marginal zone lymphoma and several high-grade B-cell lymphoma (i.e., plasmablastic lymphoma, EBV+ diffuse large B-cell lymphoma, and HHV8+ B-cell lymphoma) (1). In our patient, the morphologic and immunohistochemical features of the neoplastic infiltrate, the absence of large cells with blastic appearance, and the negativity for both EBV and HHV8 search suggested a PCM rather than the aforementioned entities. The integration with clinical features was necessary to conclude the differential diagnosis. In particular, the absence of history of immunosuppression ruled out the plasmablastic lymphoma, whereas the serological presence of a monoclonal IgA-κ component, the imaging detection of osteolytic lesions, and the bone marrow plasma cell infiltration allowed the final diagnosis of PCM.

According to the available data, PCM with intestinal involvement has a poor prognosis, with a median survival of only a few months, despite the recent discovery of novel active agents (4, 9). In addition, the chromosome 1 abnormalities, such as the 1q21 amplification of our patient, frequently detected in PCM with extramedullary involvement, are typically associated with a worse prognosis (15, 16). Our patient, despite the presence of such negative prognostic factors, is still alive at the last follow-up 4 years after diagnosis. We assume that early diagnosis of PCM by GI presentation, with limited bone co-involvement, and subsequent prompt targeted chemotherapy, resulted in a significant prognostic improvement.

In conclusion, although intestinal involvement of PCM is rare, it must be promptly identified, and a multidisciplinary approach, involving gastroenterologists, hematologists, and pathologists, is required to achieve a proper diagnosis and a successful management. In addition, this report highlights that an appropriate and early diagnosis is associated with a prognostic improvement, although further studies on a large number of patients are needed to better clarify this issue.

The studies involving human participants were reviewed and approved by San Matteo Hospital Foundation Pavia Ethics Committee. The patients/participants provided their written informed consent to participate in this study. Written informed consent was obtained from the individual(s) for the publication of any potentially identifiable images or data included in this article.

AB, NA, and ML designed and drafted the report. AB, GS, AV, CC, SF, MAL, LA, and MP collected, analyzed, and interpreted the data; AS and MP critically revised the manuscript. All authors contributed to the article and approved the submitted version.

Copyright © 2022 Bonometti, Aronico, Santacroce, Fraticelli, Lucioni, Cartia, Vanoli, Latorre, Arcaini, Paulli and Di Sabatino. This is an open-access article distributed under the terms of the Creative Commons Attribution License (CC BY). The use, distribution or reproduction in other forums is permitted, provided the original author(s) and the copyright owner(s) are credited and that the original publication in this journal is cited, in accordance with accepted academic practice. No use, distribution or reproduction is permitted which does not comply with these terms.