To examine the composition of lanostanoids in Ganoderma lucidum, we have developed a liquid chromatography–mass spectrometry (LC–MS) method by using the ganoderic acids isolated in our laboratory as reference standards. The identity of 14 peaks in the high performance liquid chromatogram (HPLC) of G. lucidum has been confirmed. By using the HPLC retention times of these ganoderic acids and their mass fragmentation patterns established in this paper, one can use LC–MS to analyze G. lucidum without requiring the reference standards of these 14 ganoderic acids. Subsequently, only the HPLC–UV method would be needed to analyze routine samples of G. lucidum.

In our ongoing investigations of Traditional Chinese Medicine (TCM) for dietary supplements we are particularly interested in the medicinal mushroom Ganoderma lucidum (W. Curt.:Fr.) Karst because it is a rich producer of lanostanoids. This class of triterpenes has been reported to have distinct pharmacological activities. These include angiotensin-converting-enzyme inhibition, anti-HIV action, antinociceptic action, histamine release inhibition, HMG-CoA reductase inhibition, and liver function stimulation (Mekenna, 1998). The prevalent usage of G. lucidum by cancer patients in Asia also persuaded us to further investigate the active components of G. lucidum. Indeed, we found that the extract of G. lucidum prepared in our labs induced the modulation of secretion from normal human peripheral blood mononuclear leukocytes of cytokines IL-2, IL-4, and IFN-γ (Ma et al., 2002). 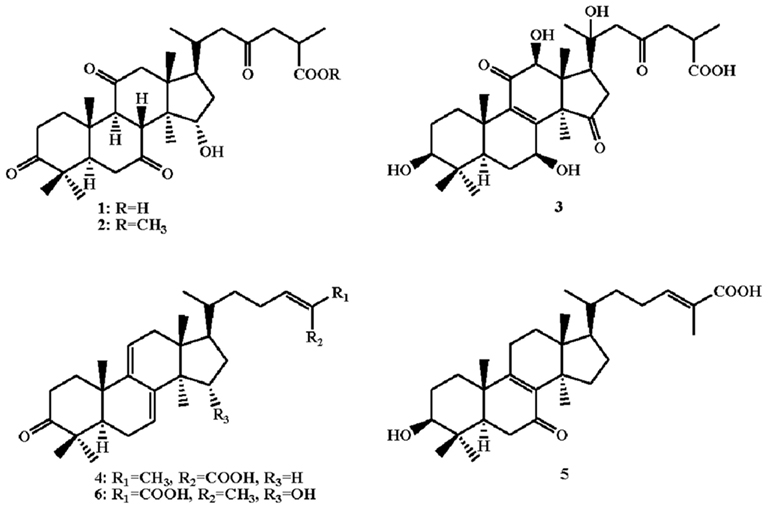 Ganoderma lucidum has usually been taken orally as mushroom powder or in its extract form, whether as prescribed by TCM doctors or in modern pill form. There is a need to understand the composition of the natural material ingested. Liquid chromatography–mass spectrometry (LC–MS) has been used wildly to characterize and standardize triterpenes in mushrooms. However, the availability of only limited number of commercial reference standards of lanostanoids has diminished the number of triterpenes to be analyzed (Adamec et al., 2009; Liu et al., 2011). It is not practical to expect every single lab to obtain reference standards by going through laborious and time-consuming steps of isolating and characterizing each individual lanostanoid. The aim of this work is to develop a rapid and conclusive LC–MS method for identification of major triterpenes in Ganoderma mushrooms by using the ganoderic acid samples we isolated.

The compound was dissolved in a 1% DMSO solution and pre-incubated with Wistar rat hepatic microsomes in the 0.2-M phosphate buffer at 37°C for 15 min. The reaction was started by the addition of 18 μM [14C]palmitoyl CoA-acyltransferase and the reaction was run at 37°C for 15 min. [14C]cholesterol ester was then quantified. The inhibitory activities, IC50, of compounds 1 and 2 against CoA-acyltransferase were determined to be 5.5 and 47.3 μM, respectively (Largis et al., 1989; Li et al., 2006).

Ganoderma lucidum mushroom fruiting bodies (10 kg) were chipped and extracted with 20 L of 95% ethanol at 80°C three times. After filtering and removing of ethanol, the resulting extract was applied onto a chromatographic silica gel column and eluted with a chloroform/acetone gradient system, followed by a reversed-phase C-18 column chromatographic run with water/methanol. The final purification of the ganoderic acids were accomplished by further high performance liquid chromatogram (HPLC) separation and re-crystallization. Their structure were identified and confirmed by NMR and MS analyses (Ma et al., 2002; Li et al., 2005, 2006). The reference standard solution of each ganoderic acid was prepared by dissolving 1 mg of ganoderic acid in 1 mL of methanol.

A G. lucidum extract (ReishiMax GLp™ 500 mg) was introduced into 25 mL of ethyl acetate, sonicated for 30 min, and filtered. The remaining insoluble material was extracted two more times as above. Three filtrates were combined and the solvent was removed under vacuum. The resulting residue was dissolved into 10 mL of methanol for LC–MS analysis.

An HPLC method was developed to analyze the lipophilic part of the commercial product ReishiMax GLp™. Ganoderic acids were separated by a C-18 column with a step gradient solvent system of CH3CN/0.1% aqueous CH3COOH. Figure 2 showed that the chromatogram of the column eluants measured at the wavelength of 252 nm. Subsequent LC–MS analysis with an ion-trap using APCI ionization technique was followed. 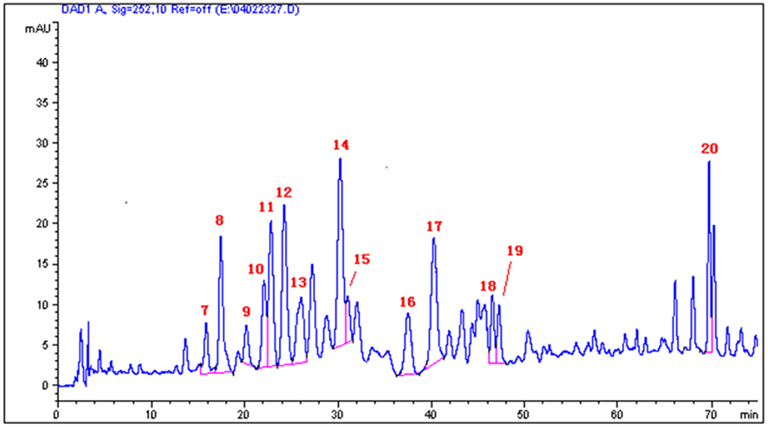 By comparison of the HPLC retention times and mass spectra of the test sample and reference standards of ganoderic acids (Table 1; Figure 3), the identities of 14 major peaks in the chromatogram of ReishiMax GLP™ were confirmed. Thus, one can easily use this approach by performing LC–MS analysis on its samples and then comparing with the data in the Table 1 and mass spectra in Figure 3 in this paper to establish the identity of each chromatographic peak. Subsequently, only HPLC will be needed for routine analysis of G. lucidum. This method has been used in our laboratories and extraction factory to examine the quality and quantity of the triterpene composition in incoming mushrooms, crude extracts, finished goods, and competitor products. Our QC lab has used the HPLC chromatograms as sample fingerprints for the cGMP compliant purpose. We believe this method could also be an effective tool for researchers in future studies of other related Ganoderma species.

We are grateful to Dr. Jiyuan Ma, Mr. Canjun Li, Ms. Qing Ye, Mr. Jianhua Yin, and Mr. Yanjun Hua for their work in isolation and characterization of ganoderic acids described in this paper.

Adamec, J., Jannasch, A., Sudhgaonkar, S., Jedinak, A., Sedlak, M., and Sliva, D. (2009). Development of a new method for improved identification and relative quantification of unknown metabolites in complex samples: determination of a triterpenoid metabolic fingerprint for the in situ characterization of Ganoderma bioactive compounds. J. Sep. Sci. 32, 4052–4058.

Copyright: © 2012 Qi, Zhao and Sun. This is an open-access article distributed under the terms of the Creative Commons Attribution Non Commercial License, which permits non-commercial use, distribution, and reproduction in other forums, provided the original authors and source are credited.

The present and future of Ganoderma Research