Many diseases are associated with the production of reactive oxidizing species that damage physiologically essential molecules. The classical view is that antioxidants scavenge these reactive oxidizing molecules and thus offer protection against disease. Antioxidants can be either enzymatic or non-enzymatic in nature. Together they form an elaborate web and protect the organism from widespread oxidative damage. Moreover, non-enzymatic antioxidants which are frequently identified in the diet are major constituents of food supplements or are administered as drugs. Antioxidant activity of compounds is commonly determined by means of competition assays. Based on these in vitro assays effective antioxidants are selected for further development and for further human use. Recently, doubts have been raised as to the in vivo relevance of antioxidants in disease protection in general. Several misconceptions on antioxidants have been uncovered (Bast and Haenen, 2013).

What thus far undisputedly remained is the competition assay as an unquestionable way to identify and categorize either endogenous or exogenous antioxidants. Similarly, the antioxidant action of cellular glutathione (GSH) in competitive protection against redox damage is also undeniable. GSH competes with other cellular redox active biomolecules for oxidizing reactive species and thus is a vital cellular protagonist.

From this scheme it can be derived that the rate of radical scavenging by A is proportional to the rate constant ka of the reaction of A with R and the concentration of A.

Reduced GSH, sodium hypochlorite, -methionine, and 1,4-dithiotreitol were purchased from Sigma-Aldrich (St. Louis, MO, USA). All other chemicals were of analytical grade. All experiments were performed in 145 mM potassium phosphate buffer pH 7.4.

Determination of stoichiometry and capacity 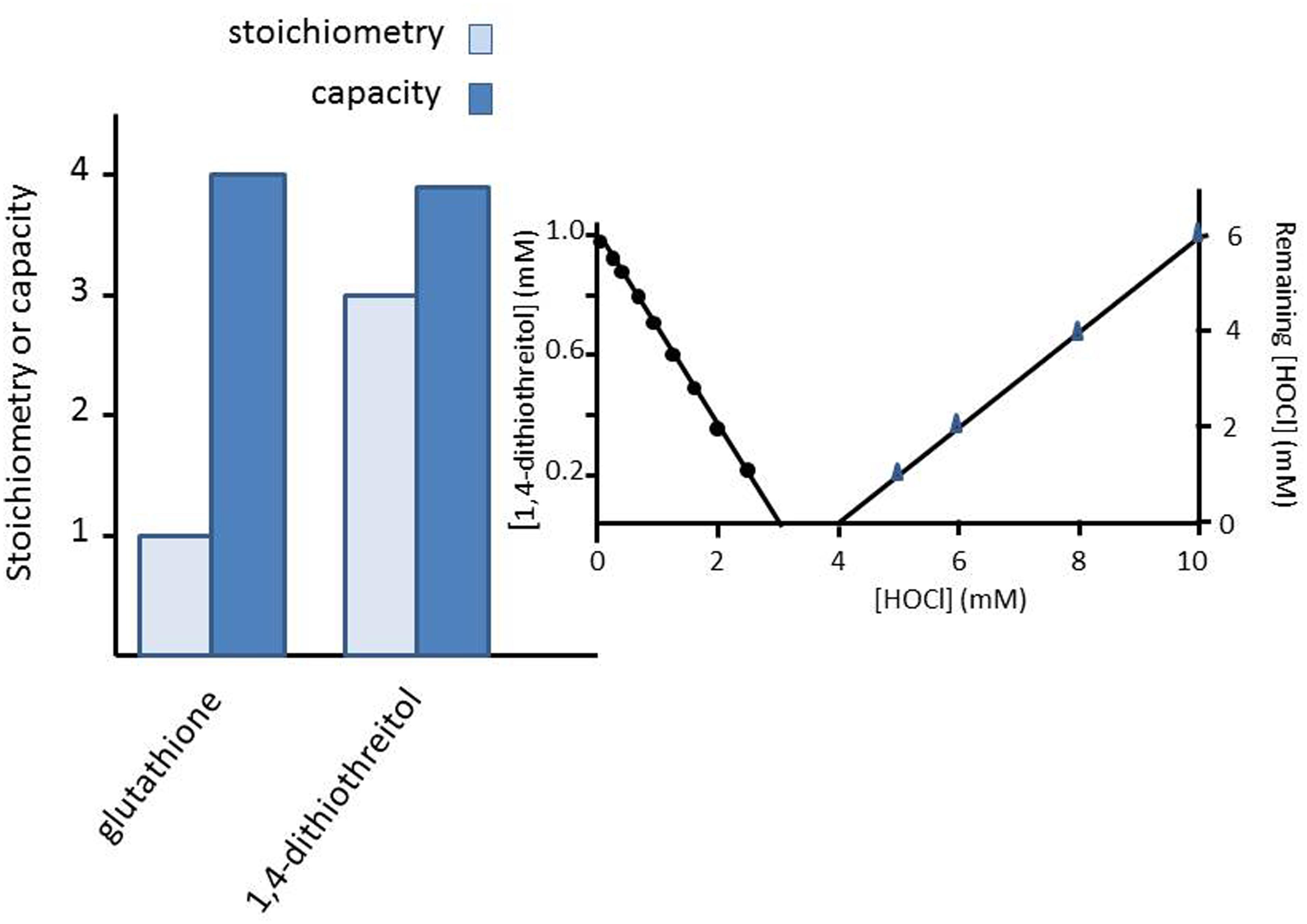 The chemical nature of the conducted experiments results in very small errors, which have not been shown for sake of clarity.

The advantage of the HOCl scavenging assay is that all of the reactive species are scavenged by either the detector or antioxidant, and therefore there is no systematic underestimation of antioxidant activity as in numerous other assays.

Glutathione is an important antioxidant and its protective action in various lung diseases is certain. In fact in several large multi-center clinical trials the GSH precursor N-acetylcysteine was used in attempts to increase the lung epithelial levels of GSH. For example in COPD patients N-acetylcysteine was shown to decrease the intensity and frequency of exacerbations (Decramer et al., 2005). In idiopathic pulmonary fibrosis patients three times 600 mg daily resulted in less worsening of the lung function (Demedts et al., 2005).

Damage to numerous vital enzymes in the lung by oxidants has been associated with various lung diseases. GSH protects. One of the oxidants involved is HOCl. This oxidant is generated from neutrophils by the enzyme myeloperoxidase (Park et al., 2013)

Glutathione is known to react with HOCl. We therefore investigated and re-evaluated GSH in various competition assays to establish its efficacy to protect physiologically critical enzymes in lung pathology which are subjected to the oxidant HOCl.

Alpha-1 antiprotease (or α1-antitrypsin or protease inhibitor) is another important enzyme in lung pathophysiology since it inactivates elastase. The latter is released during inflammation by neutrophilic granulocytes and breaks down connective tissue fibers elastin. Oxidative damage of alpha-1 antiprotease has been associated with the lung disease emphysema.

In a competition assay in which the protection by GSH is characterized, the EC50 value of GSH against damage by 100 μM HOCl on alpha-1 antiprotease is 20 μM.

The amino acid which is critical in the function of alpha-1 antiprotease is methionine (Taggart et al., 2000). We therefore also investigated the protection of GSH on the HOCl mediated oxidation of methionine. The EC50 value of GSH against oxidation by 630 μM HOCl of methionine is 520 μM.

In an effort to understand these striking differences in EC50 values of the protective action of GSH on HOCl-induced oxidative damage (as summarized in Table 1), we computed the reaction of GSH with HOCl. It seemed that stoichiometrically one molecule of GSH is rapidly consumed by reaction with one molecule HOCl but the total HOCl scavenging capacity of GSH amounts to 4, i.e., four molecules of HOCl are scavenged in total by one molecule of GSH (Figure 1). 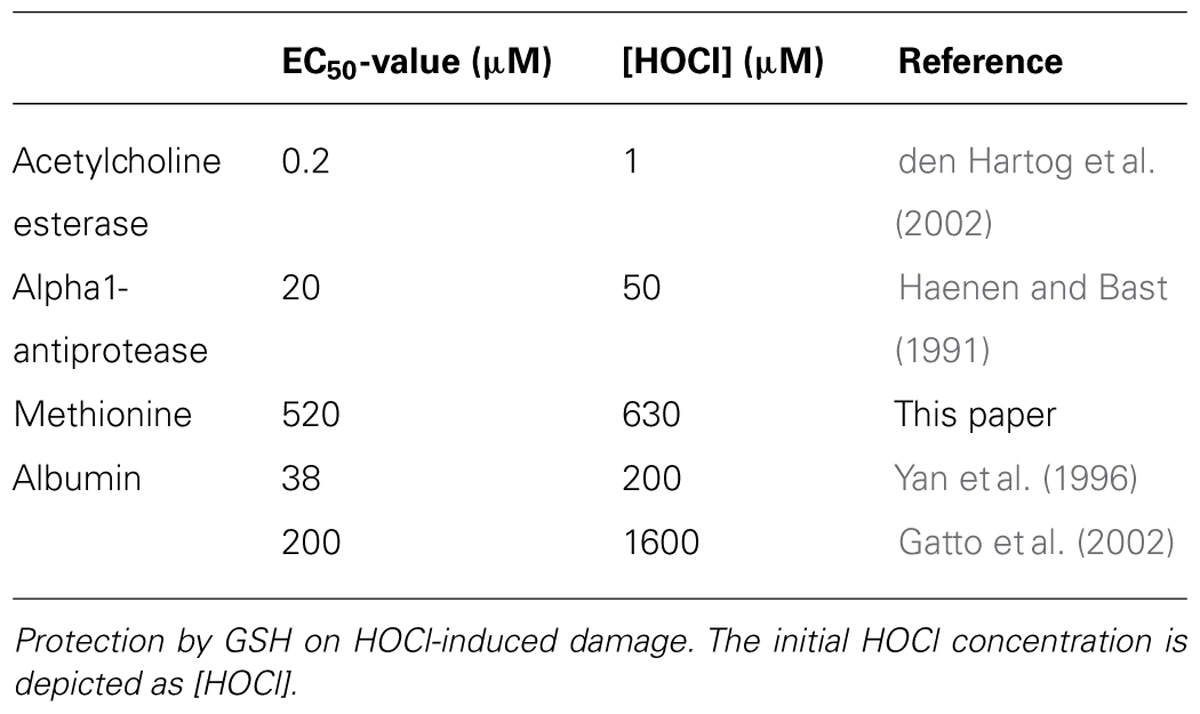 TABLE 1. The antioxidant activity of glutathione (GSH) indicated by its EC50 value in various completion assays.

For comparison, 1,4-dithiothreitol has a stoichiometry of three and a total capacity of almost four (Figure 1).

We already published that the initial concentration of the reactive species (R) can influence the observed activity of an antioxidant (Balk et al., 2009).

It can be derived that the EC50 value of antioxidants is linked to the rate constant (ka) of the antioxidant with the reactive species, as follows:

The current results show that even under the above strict conditions it is sometimes not just the reaction rate constant ka of the antioxidant with the oxidant that governs the antioxidant protection of biological targets. This is clearly presented in Figure 1. Stoichiometrically, one molecule of GSH rapidly reacts with HOCl, but at the same time in total four molecules of HOCl are scavenged by one molecule of GSH. For comparison, 1,4-dithiothreitol has a stoichiometry of three and has a total capacity of almost four molecules (Figure 1).

It is suggested that GSH reacts with HOCl in a step wise fashion to form four products. Interestingly, several higher oxidation products have been suggested to occur before (Winterbourn and Brennan, 1997). It might be proposed that the initial reaction is GSH + OCl- → OH- + GSCl (Figure 2). The observed stoichiometry of four indicates that the fourth product has a slower reaction rate with HOCl than GSH. It is not uncommon that oxidation products of antioxidants are more reactive than the parent antioxidant as we have reported earlier (Arts et al., 2004). 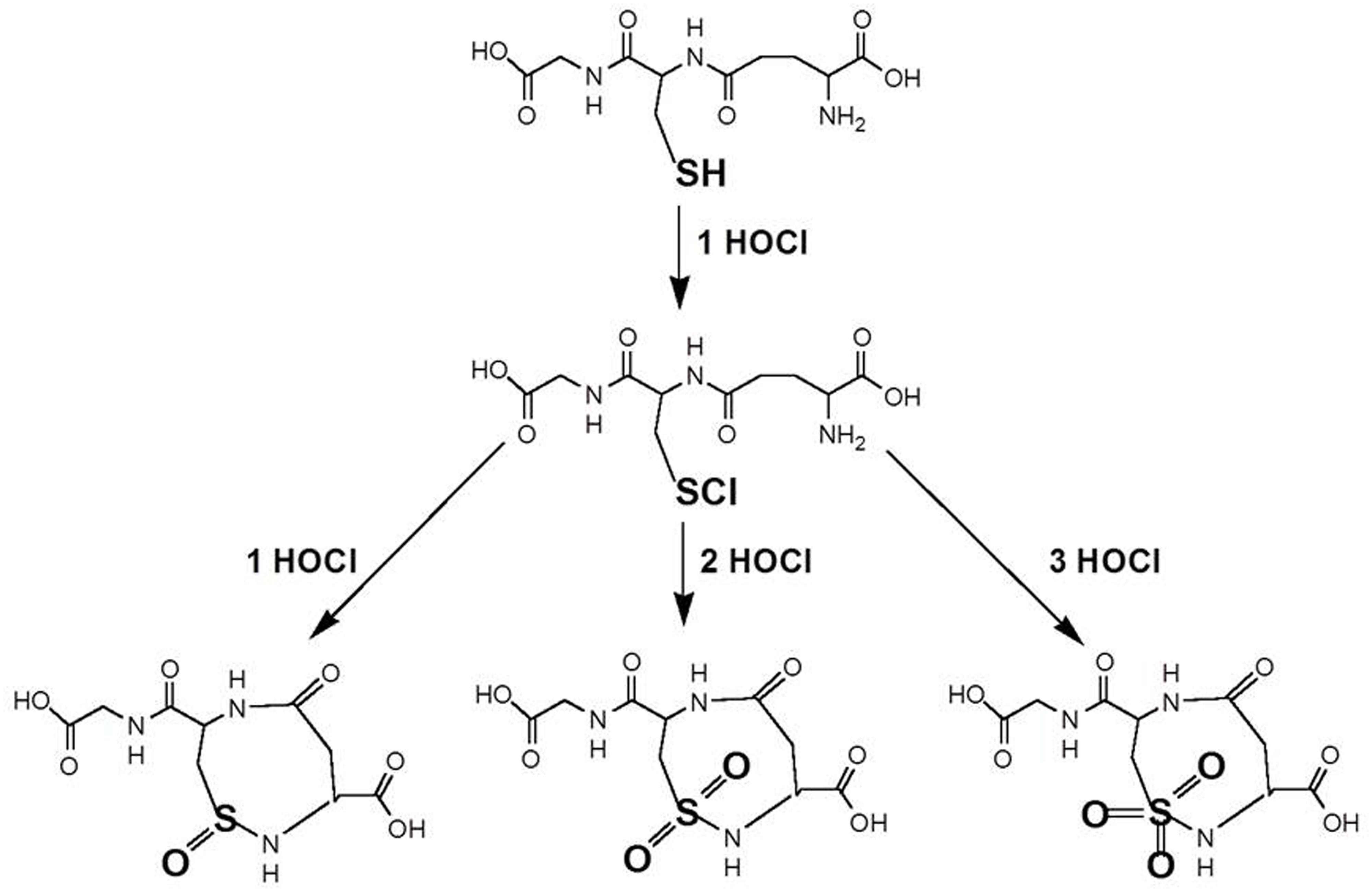 FIGURE 2. Putative reaction scheme of GSH with OCl- (after Winterbourn and Brennan, 1997). The initial reaction is the formation of glutathione sulfenyl chloride (GSCl). Further suggested products are depicted as oxidized condensation products of the sulfonyl chloride with the amino group of the glutamyl residue of GSH.

If one antioxidant molecule would scavenge one HOCl then would the EC50 value be half of the initial HOCl concentration ([HOCl]0) and thus would in that case the ratio [HOCl]0/EC50 be 2. In other words {[HOCl]0/EC50}× 1/2 will be 1.

In the scenario that the oxidation products of the antioxidant contribute to the antioxidant activity the {[HOCl]0/EC50} × 1/2 will be higher than 1. This ratio has been calculated (Table 2) for GSH protection of HOCl-induced damage of acetylcholine esterase (2.5), alpha-1 antiprotease (1.25), methionine (0.6), and albumin (4). The ratio {[HOCl]0/EC50} × 1/2 gives the average number of HOCl molecules scavenged by the antioxidant GSH at EC50 conditions. Comparing the extremes (methionine versus albumin as target or detector) shows that there is a large difference in the contribution of the oxidation products of GSH in the overall protection against the HOCl-induced damage to either methionine or albumin by GSH. This can be explained by the difference in reaction rate between HOCl with methionine (which is relatively high) and the rate between HOCl with albumin (which is relatively low).

Also in the protection by GSH against HOCl induced damage to acetylcholine esterase or alpha-1-antiprotease, the reaction products of GSH contribute to the overall activity of GSH.

Evidently, the reaction rate constant ka determines whether scavenging occurs. However, the genuine scavenging activity is primarily determined by the number of oxidant molecules (in this study HOCl) scavenged. GSH is not just a good biological antioxidant because of its reaction rate with HOCl which is generated during inflammations by myeloperoxidase but rather because the higher oxidation products generated are effective antioxidants. The amount of reactive HOCl molecules scavenged by GSH rather than its initial reaction rate marks GSH a better antioxidant than previously thought!

Winterbourn, C. C., and Brennan, S. O. (1997). Characterization of the oxidation products of the reaction between reduced glutathione and hypochlorous acid. Biochem. J. 326, 87–92.

Copyright © 2014 Haenen and Bast. This is an open-access article distributed under the terms of the Creative Commons Attribution License (CC BY). The use, distribution or reproduction in other forums is permitted, provided the original author(s) or licensor are credited and that the original publication in this journal is cited, in accordance with accepted academic practice. No use, distribution or reproduction is permitted which does not comply with these terms.

The changing faces of glutathione, a cellular protagonist., Volume I