In a recent study (Khoo et al., 2015), it has been highlighted that both polar and non-polar compounds in C. nutans could play important roles through its medicinal properties; therefore in our study, we have included both the polar and non-polar fractions of C. nutans leaves and stem bark. In order to examine the anti-inflammatory effects of C. nutans, we investigated its effects on human embryonic kidney (HEK) cells stably transfected with human TLR (HEK-BlueTM-4) and in murine macrophages (RAW264.7) challenged with LPS, the Gram-negative bacterial cell wall component, a well-established activator of TLR-4 (Mai et al., 2013). TLR-4 is the first line of host defense against acute and chronic inflammation and is one of the key pro-inflammatory signaling receptors (Park et al., 2009). Activation of TLR-4 by LPS enhances the production of NO and inflammatory cytokines, through activating nuclear factor κB (NF κB) and IRF3. Inhibition of TLR-4 activation may produce potent anti-inflammatory effects since TLR-4 is the upstream receptor that activates both NF κB and IRF3 signaling, the hallmarks of inflammation (Hatziieremia et al., 2006; Mai et al., 2013).

Clinacanthus nutans was collected from an orchard in Temerloh, Pahang Malaysia, and its identity was kindly verified by Dr. Richard Chung at the Forest Research Institute of Malaysia. The plant was also deposited in the Malaysian Agricultural Research and Development Institute herbarium with the specimen numbers MDI 12807 and MDI 12808. The plant was separated into leaves and stem bark, which were dried and powdered. The powdered leaves were extracted with polar solvents (methanol and dichloromethane) or non-polar solvents (hexane and diethyl ether) through immersion in the solvent for three days at room temperature. A total of four extracts were prepared, namely polar leave extracts (LP), non-polar leave extracts (LN), polar stem extracts (SP), and non-polar stem extracts (SN). The extracts were then gravity filtered and the solvents removed under vacuum using a rotary evaporator at 60°C. The dried extracts were subjected to further experiments. In order to standardize the extracts, we determined the total phenolic content (TPC) and total flavonoid content (TFC) of extracts using standardized assays as per described in previous studies (Mai et al., 2009a,b). TPC of the extracts were expressed as gallic acid equivalents in milligram per gram of dried material (mg GAE/g dm) while TFC of the extracts were expressed as quercetin equivalent in milligram per gram of dried material (mg QE/g dm).

The MTT cell viability assay was used to access the cytotoxicity of extracts on HEK-BlueTM-hTLR4 cells and RAW264.7 cells, as described previously with modification (Mai et al., 2009a,b, 2013, 2014; Tan et al., 2013). Briefly, all extracts (LP, SP, LN, or SN) were reconstituted using DMSO to 100 mg/mL and further diluted to required concentrations (1–100 μg/mL) using ultra-purified sterile water prior to the assays. Cells were treated with various concentrations of extracts or 0.1% DMSO (negative control) for 72 h before the reaction was terminated with the MTT reagent. The absorbance was recorded at a test wavelength of 570 nm and a reference wavelength of 630 nm using the Tecan Infinite F200 plate reader (Männedorf, Switzerland). The mean absorbance for the negative control (0.1% DMSO) was normalized as 100%.

HEK-BlueTM hTLR4 cells were plated at 1 × 105 cells/mL and extracts were added simultaneously. DMSO (0.1%) was added as a control solvent. In the presence of a TLR-4 agonist, such as LPS, the TLR-4 is expected to be activated. Activated TLR-4 induces NF-κB and activator protein-1 (AP-1) activation, under the control of NF-κB/AP-1 promoter, following which, the promoter will then induce secreted embryonic alkaline phosphatase (SEAP) production. The levels of SEAP production were determined using the HEK-BlueTM Detection Medium (InvivoGen, San Diego, CA, USA), a detection medium which changes color into purple or blue in the presence of SEAP after 24 h incubation. An extract will be accepted as a TLR-4 activator if the percentage of TLR-4 activation is more than 100% as compared cells treated with solvent control, 0.1% DMSO in the absence of LPS. Conversely, an extract will be concluded as a TLR-4 inhibitor if the extract can inhibit LPS induced TLR-4 activation. The SEAP levels were quantified using the Tecan Infinite F200 plate reader (Männedorf, Switzerland) at 630nm. The increase in the level of SEAP is directly proportionate to increased NF-κB activation, resulting in higher degree of TLR-4 activation. Finally, the IC50TLR4, indicating the concentration in which extracts inhibited 50% of LPS induced TLR-4 activity was determined.

Macrophages RAW264.7 cells were plated and either non-treated or treated with extracts (LP, SP, LN, SN) for 1 h followed by exposure to LPS for 18 h. Ten cytokines, namely the interleukin IL-1β, IL-2, IL-4, IL-5, IL-6, IL-10, IL-12p40, IL-17, IFN-γ, and tumor necrosis factor-alpha (TNF-α), were assayed in the supernatants using the MILLIPLEX® MAP Mouse Cytokine/Chemokine Magnetic Bead panel (Millipore, Germany) according to the manufacturer’s instructions. For the plate washing steps, a handheld magnet attached to a plate holder was used and the assay was performed on the Luminex 200 multiplex analyser (Austin, USA) using the Luminex Software xPONENT® 3.1 (Austin, USA) for data acquisition. The Median Fluorescent Intensity data using a 5-parameter logistic or spline curve-fitting method was used for calculating cytokine concentrations in samples. The results were normalised with cells treated with 100 ng/mL of LPS.

All data were reported as mean ± standard deviation from a minimum of three independent experiments. Statistical significance was analysed using one-way analysis of variance (ANOVA) and post testing using Dunnett’s test through SPSS (version 18.0) for Windows. A p-value of less than 0.05 (p < 0.05) was considered significantly different compared to negative control, treatment with 0.1% DMSO.

Clinacanthus nutans Extracts are Not Cytotoxic to HEK-BlueTM-hTLR4 or RAW 264.7 Cells

Cells (HEK-BlueTM-hTLR4 cells and macrophages) were treated with various concentrations (1.5625–100 μg/mL) of LP, LN, SP, or SN for 72 h. The viability of HEK cells (HEK-BlueTM-hTLR4) and murine macrophages (RAW 264.7) were not significantly reduced by any of the extracts compared to cells treated with 0.1% DMSO (negative control) (Figures 1A,B). Microscopic observation (Figure 1C) showed no morphological change for all cells treated with 100 μg/mL of the four extracts compared to the negative control cells treated with 0.1% DMSO. The results obtained conclude that there was no cytotoxicity induced by the extracts alone, which could potentially interfere with anti-inflammatory effects. 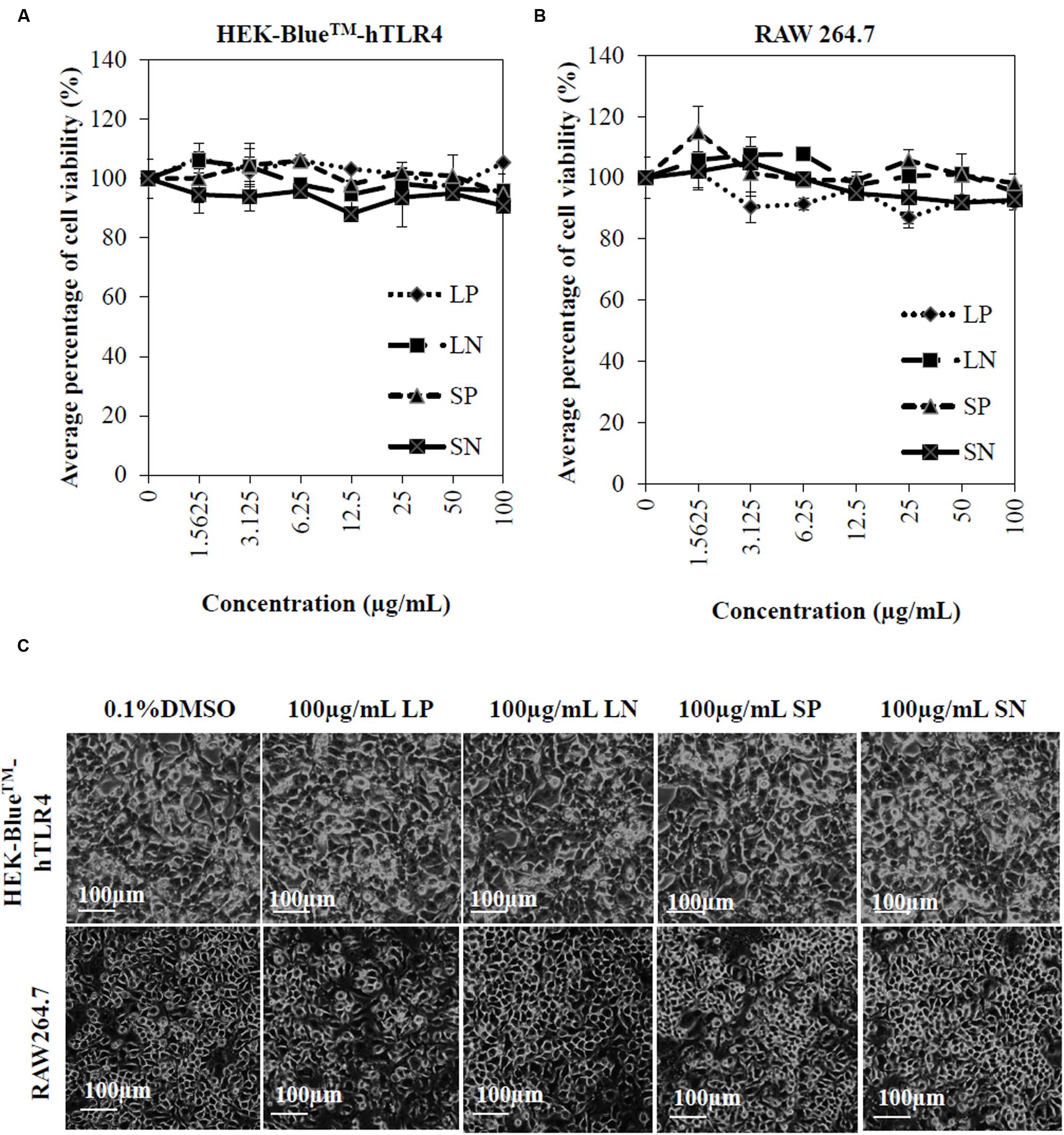 FIGURE 1. Cytotoxicity of Clinacanthus nutans extracts on cells. Dose response curve of LP, LN, SP, and SN on cell viability of human embryonic kidney cells, HEK-BlueTMhTLR-4 (A) and murine macrophages, RAW264.7 (B). All values were not significant difference when compared to 0.1% DMSO (one-way ANOVA post hoc Dunnett’s t-test). Each value represents means ± SD from three independent experiments. (C) No significant morphological changes in HEK-BlueTMhTLR-4 and RAW264.7 cells after 72 hours treatment with 100 μg/mL of extracts or 0.1% DMSO.

Lipopolysaccharide induced significant (p < 0.05) NO production compared to cells treated with DMSO or with extracts alone (LN, LP, SP, or SN, each 100 μg/mL; Figure 2A). All four extracts inhibited LPS induced NO production in a concentration-dependent manner (Figure 2B), with LP being the most potent (IC50NO= 18.9 ± 3.6 μg/mL; Table 1). 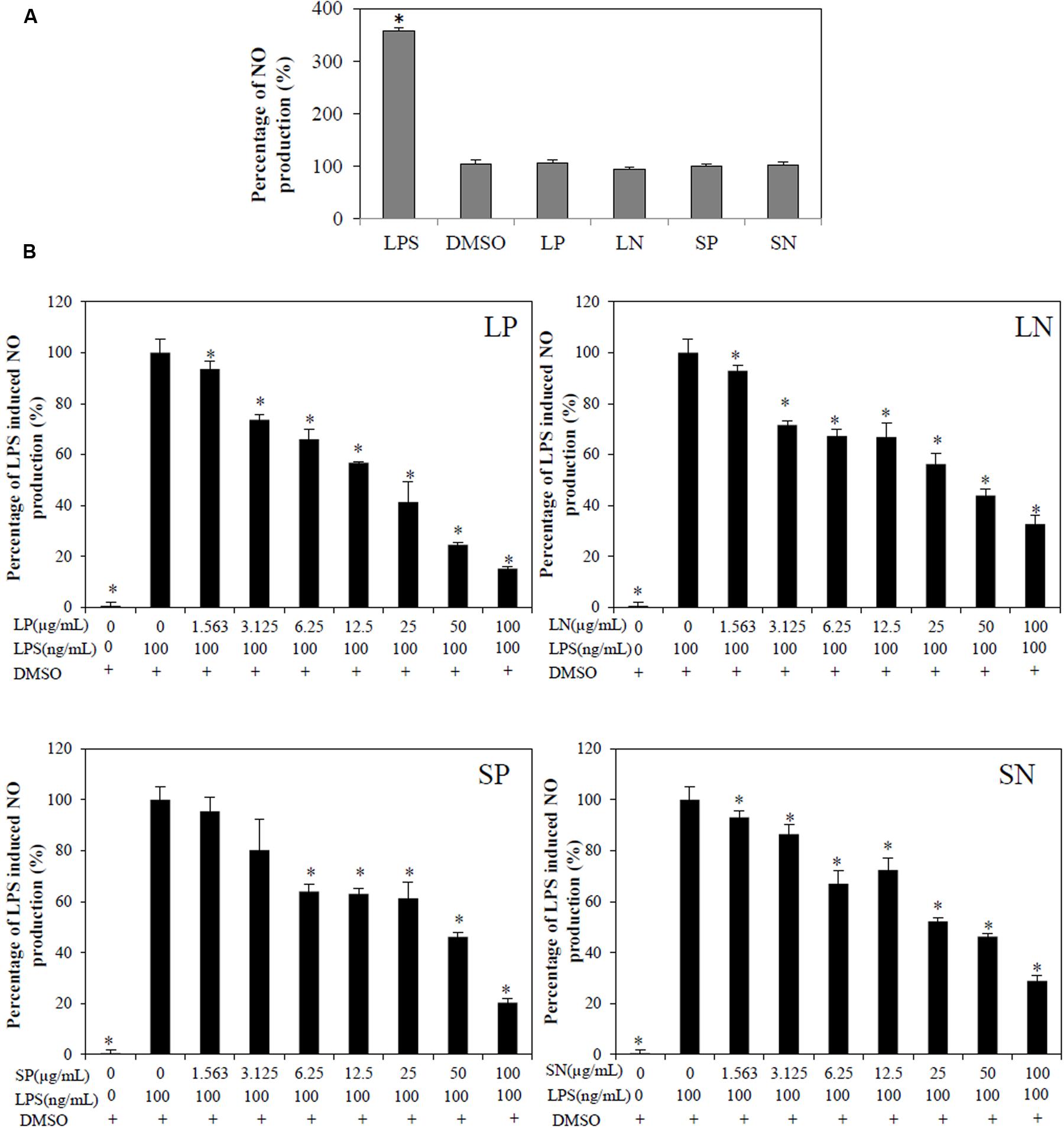 TABLE 1. Correlation between TPC and TFC of extracts and its IC50 values in Griess (IC50NO) and TLR-4 activation assay (IC50TLR4). 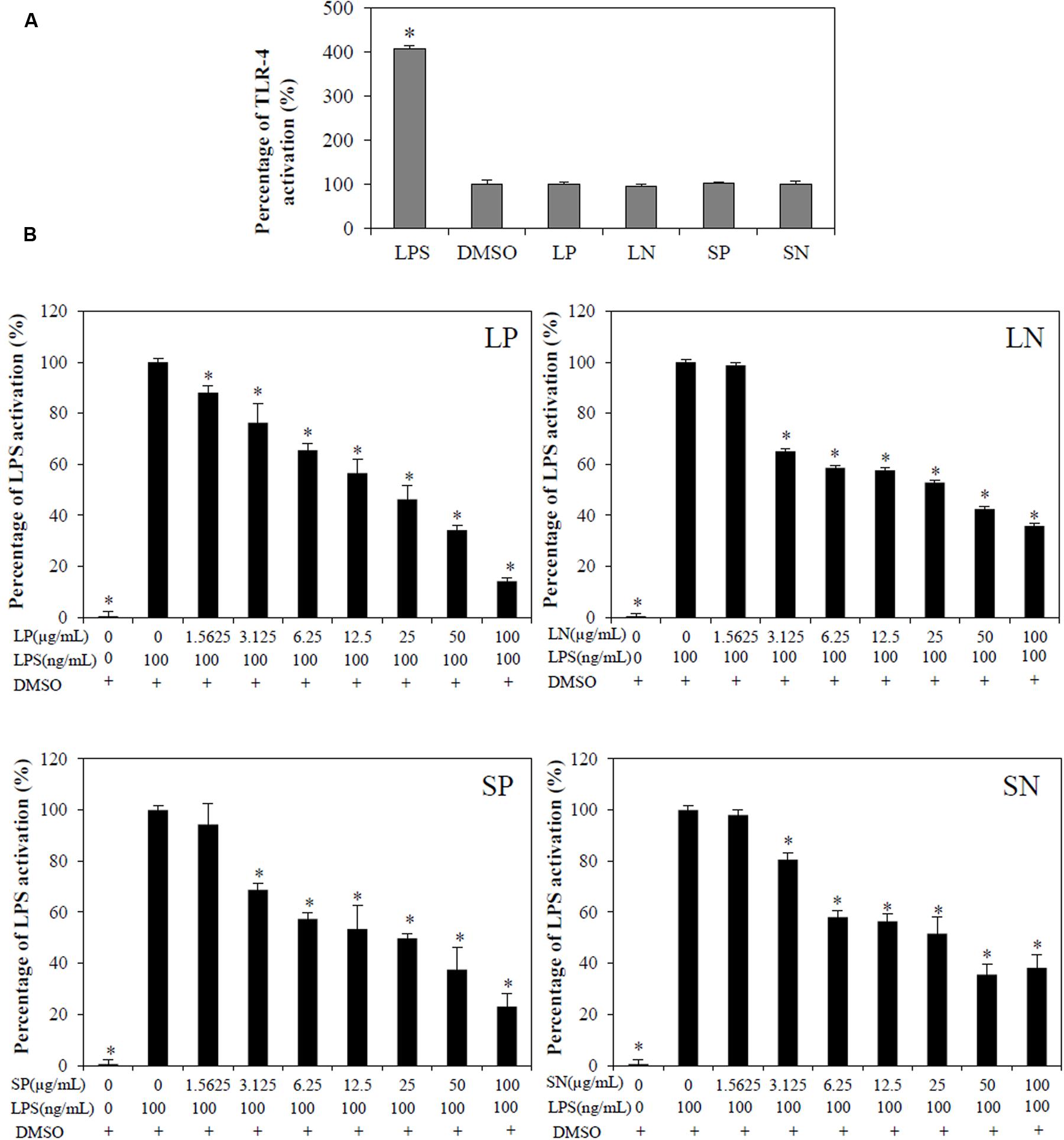 Inhibition of TLR 4 Activation and of NO Production by C. nutans Extracts are Related to Its Phenolic Compounds and Flavonoids 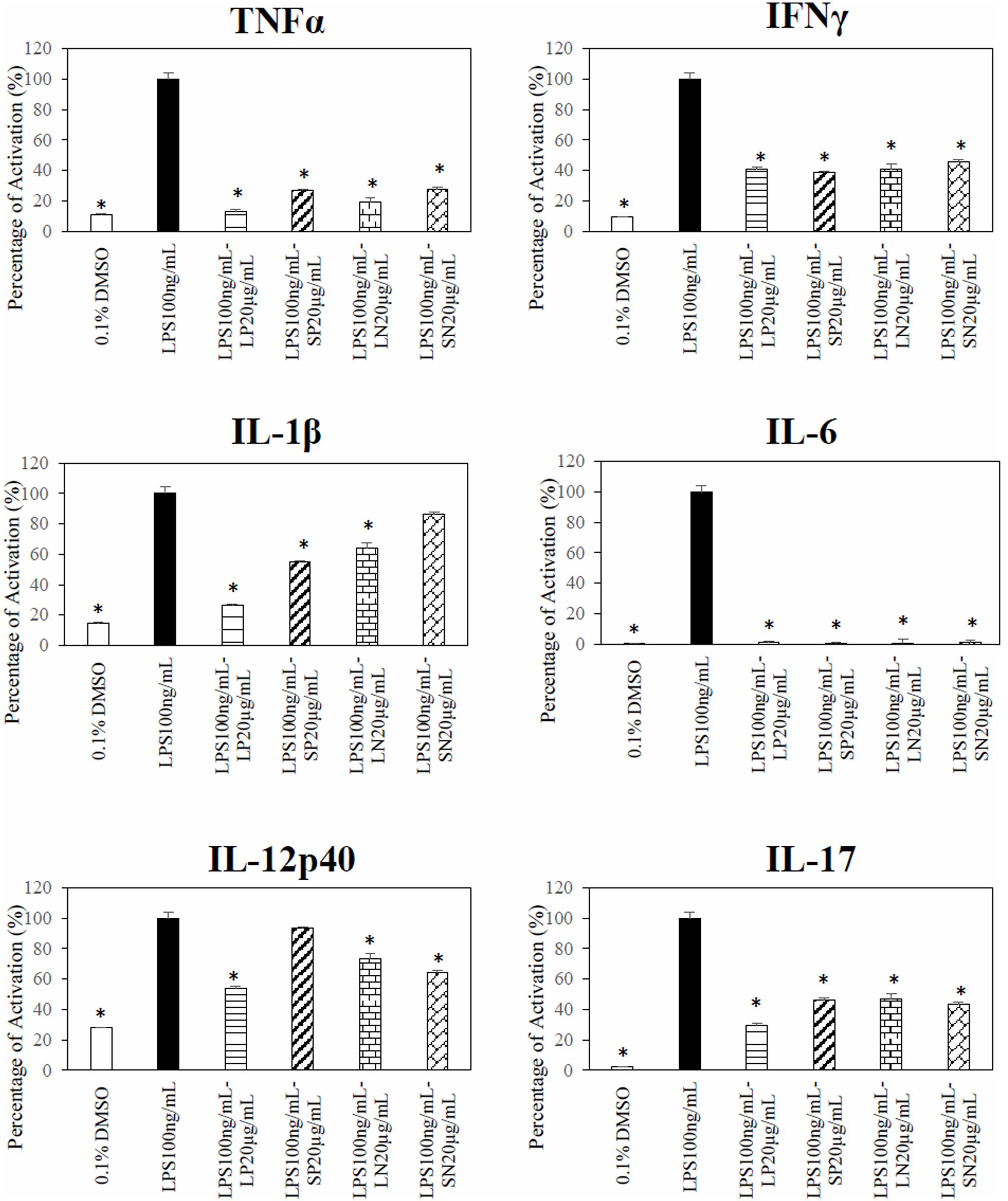 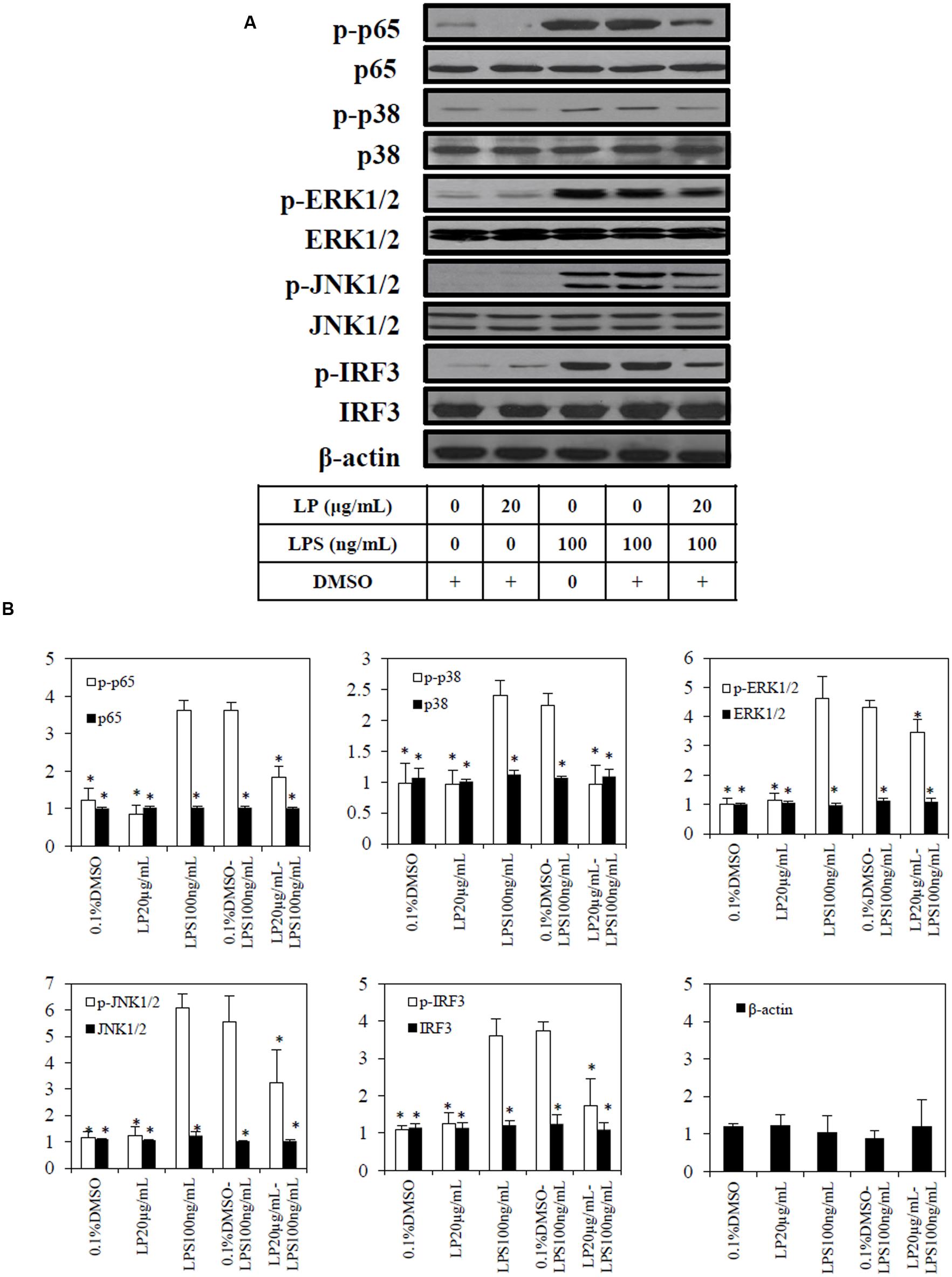 FIGURE 5. Effect of extract (LP) on LPS-induced p65, p38, pERK1/2, pJNK 1/2, pIRF3, and β-actin in RAW264.7 macrophages. RAW264.7 macrophages were pre-treated with vehicle (0.1%DMSO) or the most potent extract (20 μg/mL) of LP for 1 h before stimulation with LPS (100ng/mL) for 18 h. (A) Whole-cell extracts were assayed for its phosphorylated and non-phosphorylated p65, p38, pERK1/2, pJNK 1/2, pIRF3, and β-actin as described in Materials and methods. (B) Quantification of each blot was performed by scanning densitometry. Each blot is representative of three others. Each value is the mean ± SD of three independent immunoblotting experiments, with ∗p < 0.05 from macrophages treated with LPS alone.

Unlike other TLR, TLR-4 is the only TLR that activates both myeloid differentiation primary response 88 (MyD88) dependent and Toll/IL-1R domain containing adapter inducing IFN-β (TRIF) dependent pathways in the presence of LPS. MyD88 recruits the IL-1 receptor-associated kinases and causes the activation of NF-κB, (such as p65), p38, ERK, and Jun N-terminal kinase (JNK) (Kawai and Akira, 2007). NF-κB activation, a downstream pathway of TLR-4, is a hallmark for inflammation, contributing to chronic diseases such as inflammatory bowel disease, systemic inflammatory response syndrome, and chronic inflammatory demyelinating polyradiculoneuritis (Tak and Firestein, 2001). In the TRIF pathway, TRIF activates tumor necrosis factor receptor-associated factor (TRAF) family member through TRAF3 (Kawai and Akira, 2010). TRAF3 promotes IRF3 activation and subsequently IFN-γ induction (Kawai and Akira, 2010; Mai et al., 2013). The most potent of our extracts (LP) inhibited LPS-induced phosphorylation of p65, p38, ERK, JNK, and IRF3. These results correlated with the ability of the extracts to inhibit LPS induced TLR-4 activities. Moreover, the extract reduced LPS-induced production of IFN-γ and phosphorylation of IRF3. These are the first results showing C. nutans to target both the MyD88 dependent and TRIF dependent pathways. The finding that TLR-4 activation was prevented by the extracts of C. nutans as measured by SEAP production in response to LPS, lends further support to the hypothesis that C. nutans exerts its anti-inflammatory effects by preventing the activation of the TLR-4 receptor, thus reducing the production of inflammatory cytokines and TLR-4 related inflammatory proteins. At which point(s) of this pathway the extract produces its effects remain(s) to be determined.

The study was funded by International Medical University and Universiti Putra Malaysia.

We would like to express our gratitude to Mr. Mohd Norfaizal bin Ghazalli from Malaysian Agricultural Research and Development Institute (MARDI) and Dr. Richard Chung from Forest Research Institute of Malaysia (FRIM) for assistance rendered during the course of the study. We also appreciate Emeritus Prof. Brian L. Furman from University of Strathclyde, UK for his critical review of the manuscript.

Copyright © 2016 Mai, Yap, Kho, Ismail, Yusoff, Shaari, Chin and Lim. This is an open-access article distributed under the terms of the Creative Commons Attribution License (CC BY). The use, distribution or reproduction in other forums is permitted, provided the original author(s) or licensor are credited and that the original publication in this journal is cited, in accordance with accepted academic practice. No use, distribution or reproduction is permitted which does not comply with these terms.