• Regardless of phenotype, this is the first pharmacogenetic study of allopurinol-induced CADR in patients of Thai ancestry.

• In this study we confirmed the association between HLA-B*58:01 and allopurinol-induced SJS-TEN, DRESS, and MPE in Thai population.

• Regarding to our findings, the pharmacogenetic interpretation could be generalized to drug hypersensitivity including DRESS, SJS-TEN, and MPE.

Clinical presentation of SJS and TEN is characterized by rapid progression of mucosal detachment and systemic symptoms which may present as fever, mild elevation of hepatic enzymes, and intestinal and pulmonary manifestation (Barvaliya et al., 2011; Harr and French, 2012). SJS and TEN are differentiated by the seriousness of skin detachment, which is limited in SJS (<10% of body surface area; BSA) and more widespread in TEN (>30% of BSA), with the intermediate stage (10–30% of BSA) of skin detachment referred to as SJS/TEN overlapping (Aihara, 2011; Harr and French, 2012). DRESS syndrome is an extremely serious adverse effect referred to sometimes as DHS. It is characterized by a skin rash, lymphadenopathy, fever, and can involve single or multiple organs (Aihara, 2011; Fleming and Marik, 2011).

Allopurinol is a commonly prescribed medication that has been used to inhibit xanthine oxidase in patients with gouty arthritis, hyperuricemia, and in cancer patients undergoing chemotherapy (Lam et al., 2013; Min et al., 2015). In Thailand, allopurinol is a major cause of CADR and has been reported as the second most frequent cause of CADR, including SJS-TEN (SJS, TEN, SJS/TEN) and DRESS (Tassaneeyakul et al., 2009; Saokaew et al., 2014). Several studies have reported that severe reactions to allopurinol are strongly associated with HLA-B*58:01, which is carried by 8–15% of Han Chinese and Thais (Hung et al., 2005; Tassaneeyakul et al., 2009; Puangpetch et al., 2015), but occurs relatively infrequently in Japanese (0.6%) and European (0.8%) populations (Kaniwa et al., 2008; Lonjou et al., 2008; Goncalo et al., 2013). According to the data from the spontaneous reports by the Health Product Vigilance Center of Thailand, allopurinol is the second ranked of common culprit drugs, with at least 1488 patients suffering from SJS-TEN and at least 75 patients suffering from DRESS during the last 20 years (http://thaihpvc.fda.moph.go.th/thaihvc/Public/News/uploads/hpvc_5_13_0_100526.pdf).

In this study, we carried out research as a retrospective and prospective case-control study. From 2011 to 2015, patients with allopurinol-induced CADR admitted to the allergy clinic of Faculty of Medicine Ramathibodi Hospital, Mahidol University were enrolled. Thirty patients with allopurinol-induced CADR were categorized into DRESS (10 cases), SJS-TEN (13 cases) and MPE (7 cases). Patients who had been taking allopurinol for more than 6 months without evidence of cutaneous adverse effects were recruited as allopurinol-tolerant controls (n = 100). In addition, general population who had not taken allopurinol and had no history of drug induced cutaneous adverse reactions were included in this study. Both case and control subjects were independently recruited with no family relationship. Data for this healthy control group was obtained from 1095 subjects undergoing HLA-B genotyping through the Laboratory for Pharmacogenomics, Somdech Phra Debaratana Medical Center (SDMC), Ramathibodi Hospital, Thailand.

The study was performed and approved by the Ramathibodi Hospital ethical review board, and informed consent was obtained from all of the participants.

Blood samples were collected into EDTA tubes. DNA was isolated using the MagNA Pure automated extraction system (Roche Diagnostics, USA) based on magnetic-bead technology. The quality of genomic DNA was assessed using a Nano Drop ND-1000 to measure quantity and purity of genomic DNA. All DNA was aliquotted and stored at −20°C before analysis.

The HLA-B alleles were genotyped by the Polymerase Chain Reaction-sequence specific oligonucleotide probe (PCR-SSOP) principles with the commercial kit (LABType SSO HLA Typing Kit; One Lambda Inc., CA, USA). Then, the HLA-B alleles were carried out using Luminex™ Multiplex Technology (Luminex® IS 100, USA). Briefly, PCR products were hybridized against a panel of oligonucleotide probes coated on polystyrene microspheres that have sequences complementary to stretches of polymorphic sequence within the target HLA-B alleles. The amplicon-probe complex was visualized using a colorimetric reaction and fluorescence detection technology. Data analysis for the HLA-B assays were performed with HLA fusionTM 2.0 software.

The association between HLA-B*58:01 and allopurinol-induced CADR was evaluated by comparing the group of individuals with CADR with the allopurinol-tolerant groups and the general population. Data were counted by presence or absence of HLA-B*58:01 allele. Chi-square test and Fisher's exact test were used to analyze the association between allopurinol-induced cutaneous adverse reactions and HLA-B*58:01. Statistical analysis was performed using SPSS version 16.0 (SPSS Inc., Chicago, IL, USA). The strength of association was estimated by calculating the odds ratio (OR) with a 95% confidence interval (CI). Sensitivity, specificity, positive predictive value (PPV) and negative predictive value (NPV) were calculated. P ≤ 0.05 (two-sided) were considered to indicate statistical significance. 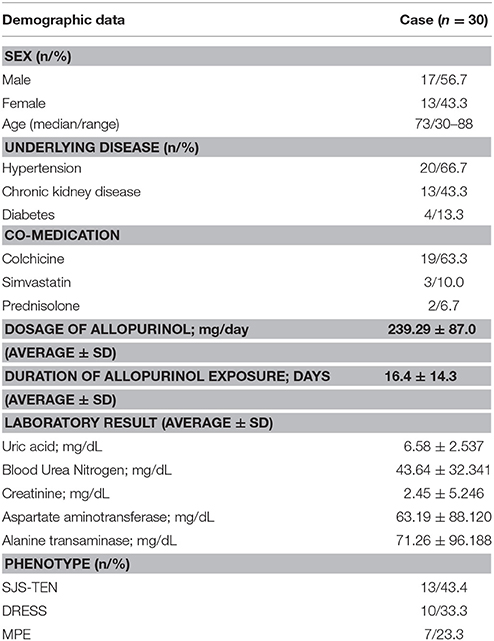 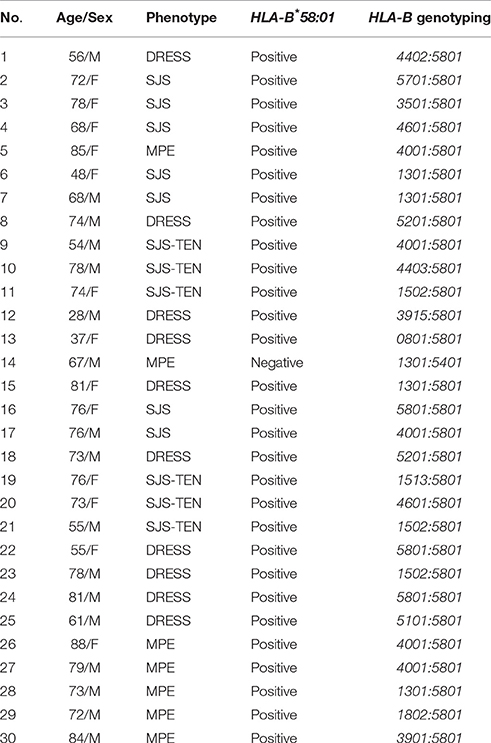 Table 4. The association of individual HLA-B allele with allopurinol-induced SJS-TEN.

Table 5. The association of individual HLA-B allele with allopurinol-induced DRESS.

Table 6. The association of individual HLA-B allele with allopurinol-induced MPE.

HLA-B*58:01 was the most predominant allele associated with allopurinol-induced CADR and was not found in only one patient who had allopurinol-induced MPE (HLA-B*13:01/54:01). Moreover, there was no significantly associated CADR with any other HLA-B alleles such as HLA-B*13:01, indicating that HLA-B*58:01 has an important role in the progression of allopurinol-related CADR in the Thai population. The odds ratio (OR) for the association of HLA-B*58:01 with combined CADR phenotypes in this population was 696.00 (p < 0.01). Using the allopurinol tolerant group as the control, the HLA-B*58:01 allele had 95.20% sensitivity and 100% specificity for diagnosing CADR. This strong association also has been observed in other Asian countries (Hung et al., 2005; Kaniwa et al., 2008; Jung et al., 2011; Kang et al., 2011).

Moreover, MPE has been considered to be distinct from SJS-TEN, characterized as macule and papule rash, with symmetry on both left and right of body and especially on the face, palms and feet, and with no detachment on the body surface area and no systemic involvement (Pichler et al., 2002). The association of HLA-B*58:01 with MPE is less well studied (Profaizer and Eckels, 2012). Recently, Cao et al. found that all 22 Han Chinese with MPE in that study were HLA-B*58:01 positive (Cao et al., 2012). Among 12 Australian patients, none was HLA-B*58:01 positive, and three of four had MPE, which was statistically significantly different from the allopurinol-tolerant group (Lee et al., 2012). In recent times, we investigated an association between HLA-B*58:01 and allopurinol-induced MPE. By comparison, the OR of HLA-B*58:01 was 144.0 and 53.2 between the MPE patients with the allopurinol-tolerant and untreated Thai population groups. However, a major limitation of this study was the sample size of the MPE patients available for the analysis. Confirmation of this result in an independent cohort of larger sample size would allow us to determine whether the HLA-B*58:01 identified in this study is definitely associated with the development of allopurinol-induced MPE and provide more accurate estimates of their impact in the clinical practice.

With evidence support the association of the HLA-B*58:01 allele with allopurinol-induced CADR, CPIC guidelines recommend the use of pharmacogenomics tests for presence of the HLA-B*58:01 allele before initiating allopurinol therapy in patients (Hershfield et al., 2013). After patients have taken an HLA test, their results are entered into a plastic “pharmacogenomic wallet card,” which basically contains the genomic results of those related to the risk of CADR. This card can be carried around and shown to different doctors in the future (Figures 1A,B). Currently, there were over 1400 patients which were genotyped and delivered the pharmacogenomic cards for screening HLA-B*58:01 before allopurinol prescription from our setting. The pharmacogenetics interpretation has been changed from “High risk for allopurinol-induced SJS-TEN” (Figure 1A) to be “High risk for allopurinol-induced SJS-TEN, DRESS and MPE” (Figure 1B) from our finding in Thai population. Physicians and national policy makers should consider genetic screening for the HLA-B*58:01 alleles prior to initiation of allopurinol therapy in Thai patients.

This study was supported by grants from the (1) Faculty of Medicine, Ramathibodi Hospital, Mahidol University (2) THAI-SCAR project: WCU-002-HR-57, Chulalongkorn University.

Copyright © 2016 Sukasem, Jantararoungtong, Kuntawong, Puangpetch, Koomdee, Satapornpong, Supapsophon, Klaewsongkram and Rerkpattanapipat. This is an open-access article distributed under the terms of the Creative Commons Attribution License (CC BY). The use, distribution or reproduction in other forums is permitted, provided the original author(s) or licensor are credited and that the original publication in this journal is cited, in accordance with accepted academic practice. No use, distribution or reproduction is permitted which does not comply with these terms.