We have previously demonstrated that DT-010, a novel conjugate of danshensu (DSS) and tetramethylpyrazine (TMP), displays anti-tumor effects in breast cancer cells both in vitro and in vivo. In the present study, we investigated whether DT-010 enhances the chemotherapeutic effect of doxorubicin (Dox) in MCF-7 breast cancer cells and exerts concurrent cardioprotective benefit at the same time. Our findings showed that DT-010 was more potent than TMP, DSS, or their combination in potentiating Dox-induced toxicity in MCF-7 cells. Co-treatment with DT-010 and Dox increased apoptosis in MCF-7 cells relative to Dox alone. Further study indicated that glycolytic capacity, glycolytic reserve and lactate level of MCF-7 cells were significantly inhibited after DT-010 treatment. DT-010 also increased the expression of the pro-survival protein GRP78, which was inhibited by co-treatment with Dox. Both endoplasmic reticulum stress inhibitor 4-PBA and knockdown of the expression of GRP78 protein potentiated DT-010-mediated apoptosis in MCF-7 cells. Moreover, DT-010 inhibited Dox-induced cardiotoxicity in H9c2 myoblasts. In conclusion, DT-010 and Dox confer synergistic anti-tumor effect in MCF-7 breast cancer cells through downregulation of the glycolytic pathway and inhibition of the expression of GRP78. Meanwhile, DT-010 also protects against Dox-induced cardiotoxicity.

Doxorubicin, an antibiotic classified as belonging to the anthracycline group, is one of the most effective broad-spectrum anti-cancer drugs and is extensively used for the treatment of many types of cancers including breast cancer, prostate cancer, and ovarian cancer. However, many side effects, especially dose-dependent and cumulative cardiotoxicity, often limit its clinical use (Swain et al., 2003). To minimize its toxicity in heart, and multidrug resistant response in cancer cells, many strategies – such as combination with other anti-cancer or cardioprotective drugs – have been tried (Das et al., 2010; Demetri et al., 2012).

Aerobic glycolysis refers to the process of transformation of glucose in to lactate in the presence of limited oxygen. Many types of cancer cells exhibit enhanced aerobic glycolysis to meet energy demand and macromolecular biosynthesis, which partly depends on factors such as hypoxia and impairment of mitochondrial respiration (Zheng, 2012; Ganapathy-Kanniappan and Geschwind, 2013). Studies have shown that inhibition of glycolysis decreases ATP production, induces cancer cell death and increases the sensitivity of cancer cells to chemotherapeutic agents, indicating that glycoysis is a promising target for cancer therapy (Xu et al., 2005; Pelicano et al., 2006; Finley et al., 2011; Liu et al., 2014).

The endoplasmic reticulum (ER) plays a major role in promoting protein folding and maintaining cellular calcium homeostasis. Under cellular stress conditions such as oxidative stress, hypoxia and nutrient deprivation, the unfolded or misfolded proteins may accumulate in the ER, leading to ER stress (Verfaillie et al., 2013). Several studies showed ER stress is implicated in the modulation of glycolysis. ATF-4 (activating transcription factor 4), an ER stress response factor, was demonstrated as a transcriptional regulator of glycolysis (Lee et al., 2015). 2-DG (2-deoxy-D-glucose) is an inhibitor of glycolysis, which also induces ER stress (Yu and Kim, 2010). GRP78, a regulator of ER stress, is associated with aerobic glycolysis in cancer cells (Li et al., 2015). Many kinds of cancer cells exhibit increased expression of GRP78 protein in the tumor microenvironment, resulting in tumor survival, metastasis and resistance to chemotherapy (Lee, 2007). Thus, inhibition of GRP78 is a strategy to overcome chemotherapeutic resistance and improve cancer therapy.

Our previous findings indicated that a DSS and tetramethylpyrazine (TMP) derivative, DT-010, was more potent than their parental compounds or their combination in inhibiting proliferation of breast cancer cells both in vitro and in vivo by targeting mitochondrial complex II (Wang et al., 2016). In this study, we will investigate whether DT-010 enhances the chemotherapeutic effect of Dox in MCF-7 breast cancer cells and its underlying mechanisms. Furthermore, the cardioprotective effects of DT-010 against Dox-induced cardiotoxicity will also be determined.

Cell viability was assessed by MTT assay. Briefly, H9c2 cells were cultured in 96 well plates for 24 h. After 24 h of treatment with Dox in the absence or presence of DT-010, cells were incubated in medium containing 1 mg/ml MTT. The formazen was then dissolved with 100 μl DMSO after incubation at 37°C. SpectraMax M5 Microplate Reader was used to detect the absorbance at 570 nm. Cell numbers were determined as described previously (Wang et al., 2015). Briefly, MCF-7 cells were cultured in 96-well plates for 24 h. After treatment with DT-010 and DT-010 for 24 h, cells were stained with DAPI and then visualized by the In Cell Analyzer 2000 system. The number of cells was calculated using Developer Toolbox software. For apoptosis assay, MCF-7 cells were stained with Hoechst 33342 for 15 min to measure apoptotic cells. The apoptotic cells with changes in chromatin condensation were analyzed by the In Cell Analyzer 2000 system.

MCF-7 cells at a density of 1 × 104 cells/well were cultured in 24-well tissue microplates (Seahorse) for 24 h (Each group has at least three wells). After 12 h of DT-010 treatment, the medium was then replaced with Seahorse base medium (pH = 7.4) and placed the plate into 37°C non-CO2 incubator for 1 h. The ECAR and OCR values were measured before and after the injection of metabolic reagents from the XF Glycolyis Stress Test Kit.

MCF-7 cells were plated in 96-well plates at a density of 6 × 103 cells/well. After 12 h of DT-010 treatment, the production of lactate in culture medium was measured using Lactate assay kit (BioVision) and normalized to the number of cells.

Cells lysate was extracted as previously report (Wang et al., 2015). Briefly, MCF-7 cells were washed with PBS and lysed by cell lysis buffer supplemented with 1% phenylmethanesulfonyl fluoride and 1% cocktail. After 30 min of incubation on ice, the samples were centrifuged (12,000 × g) for 20 min at 4°C. The concentration of supernatant proteins was measured according to the protocol for BCA protein assay (Thermo Scientific). After being denatured at 95°C for 5 min, proteins were then separated by sodium dodecyl sulfate polyacrylamide gel electrophoresis (SDS-PAGD) and transferred to polyvinylidene fluoride membrane using semi-dry protein transfer. The membrane was block by 5% milk for 1 h and incubated with primary antibodies against β-actin, cleaved-PARP, p53 (Cell Signaling) and GRP78 (Santa Cruz Biotechnology). After incubation at 4°C overnight, the membrane was incubated with secondary antibodies (Cell Signaling) for 1 h at room temperature. Finally, the advanced enhanced ECL system (GE Healthcare) was used to detect the immune complexes and the bolts were quantified by Quantity One software (Bio-Rad).

Data are shown as mean ± standard deviation (SD). Differences among the groups were compared by one-way ANOVA followed by Turkey’s multiple comparison tests. P < 0.05 was considered as statistically significant.

As shown in Figure 1B, the numbers of MCF-7 cells were significantly decreased after 24 h of Dox (1 μM) treatment, and were further reduced after DT-010 treatment. Co-treatment with DT-010 and Dox was more potent than DSS, TMP, DSS+TMP, and Dox combination in inducing cell death of MCF-7 cells (Figure 1C).

To investigate whether DT-010 increases Dox-induced apoptosis in MCF-7 cells. MCF-7 cells were co-treated with DT-010 and Dox for 24 h. Figure 2A shows that co-treatment with Dox and DT-010 for 24 h changes cell morphology as compared with Dox treated group. Dox treatment alone induced apoptosis in MCF-7 cells, and the combination of DT-010 and Dox further increased cell apoptosis (Figures 2B,C). This is consistent with the data showing that the expression of apoptosis-related proteins p53 and cleaved-PARP increased after Dox treatment (Figures 2D–F), which was further amplified after DT-010 and Dox co-treatment. 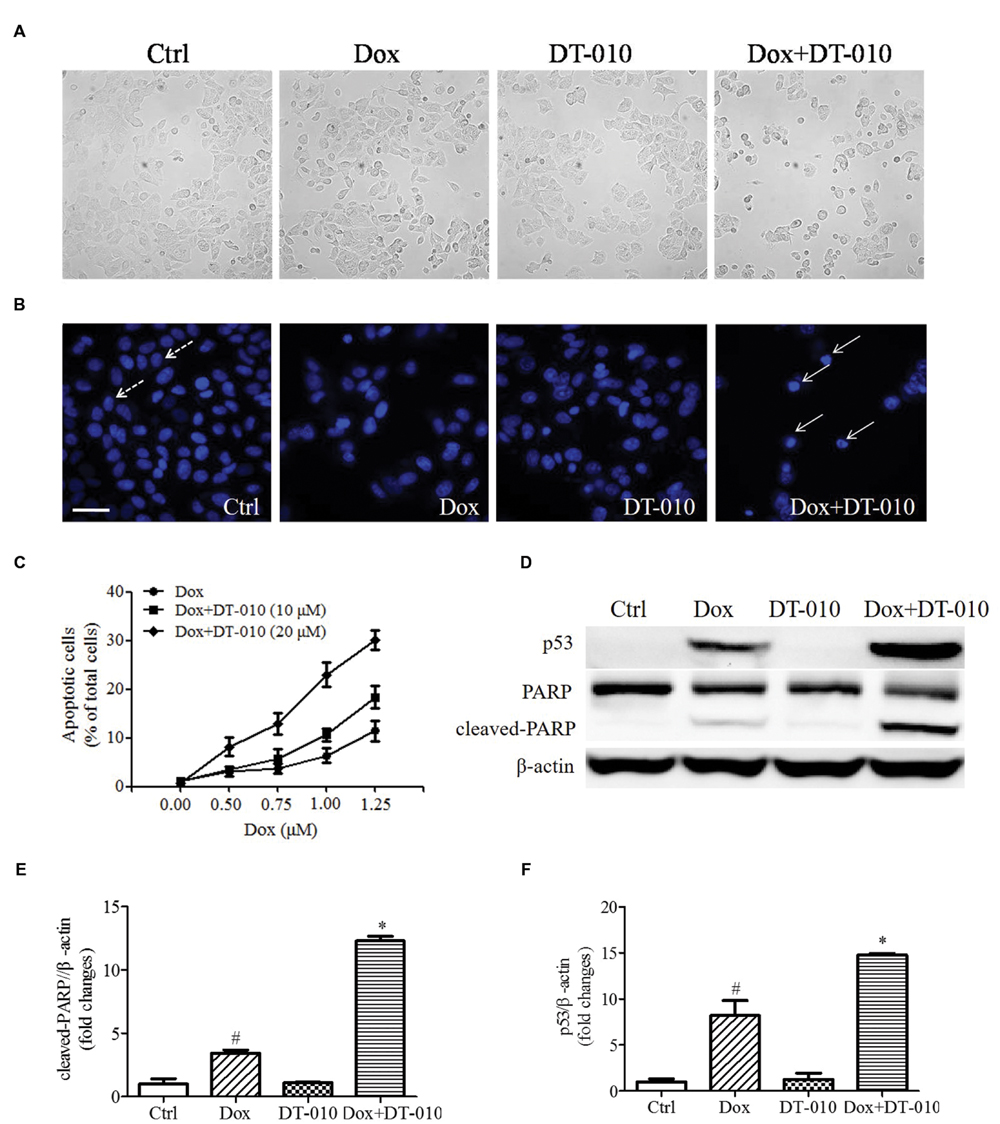 The effects of DT-010 on the glycolysis of MCF-7 cells were investigated. The changes of ECAR and OCR were monitored by the Seahorse XF Extracellular Flux Analyzer. As shown in Figures 3A,C,D, the glycolytic capacity and glycolytic reserve significantly decreased after DT-010 treatment. DT-010 also inhibits the basic level of OCR in MCF-7 cells (Figure 3B), which is consistent with our previous study, showing that DT-010 inhibits mitochondrial respiration in breast cancer cells. Further study showed DT-010 treatment inhibited the level of lactate in culture medium (Figure 3E). 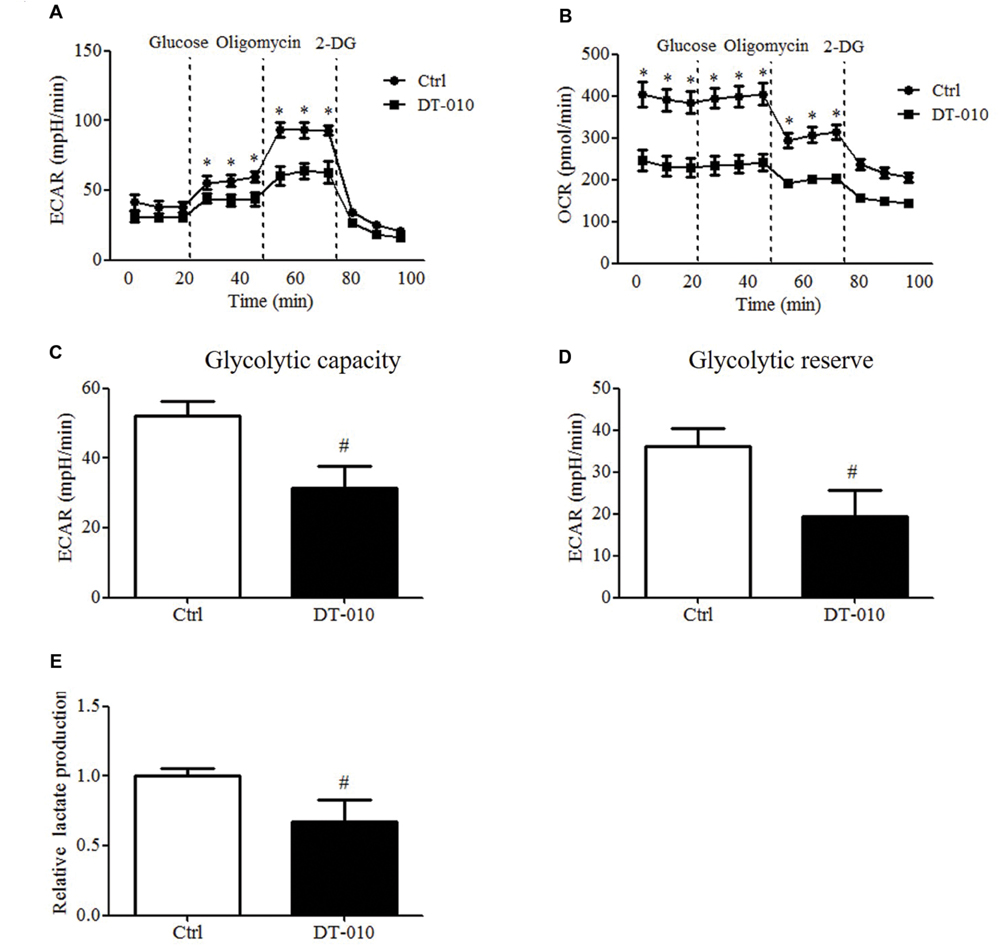 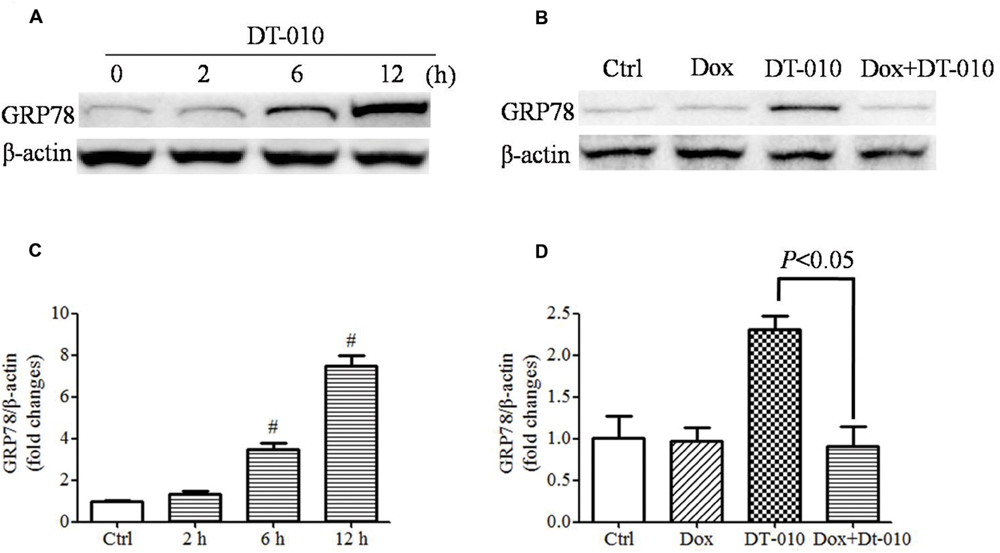 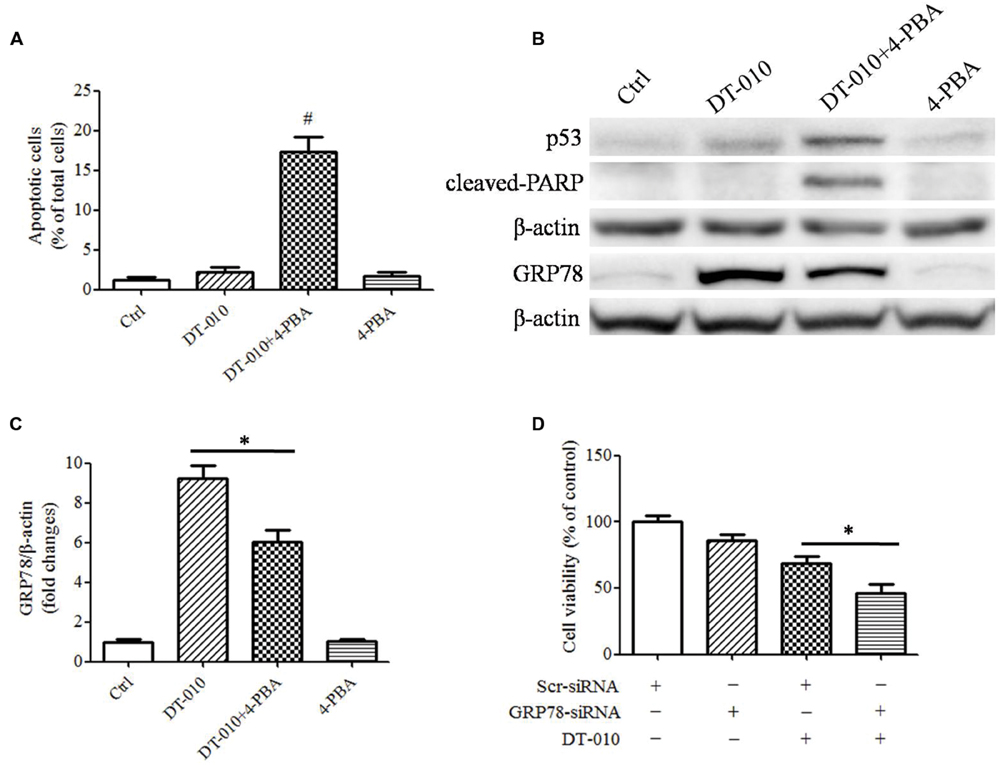 The effects of DT-010 on Dox-induced toxicity were investigated in this study. Figures 6A,B indicate that DT-010 exposure alone showed no toxicity at concentrations below 20 μM as detected by LDH assay and MTT assay. Further study indicates Dox causes cytotoxicity and decreases cell viability in H9c2 cells, while DT-010 co-treatment reduces LDH release (Figure 6C) and preserves cell viability (Figure 6D) in a dose-dependent manner as compared with the DT-010 treated group. These data suggest that DT-010 inhibits Dox-mediated cardiotoxicity in H9c2 cells. 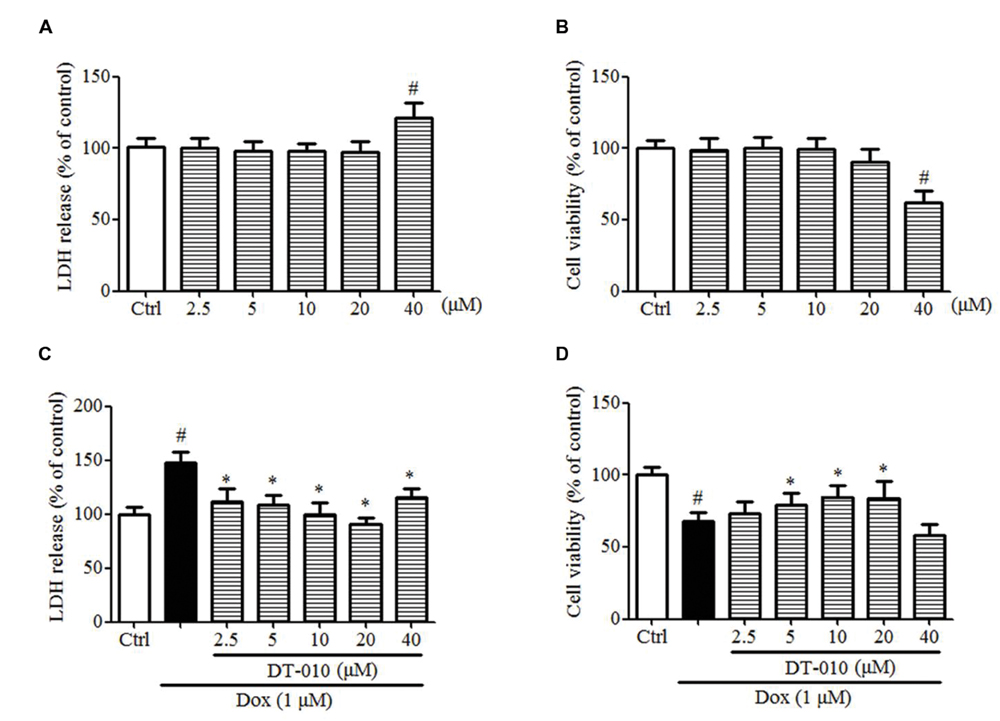 FIGURE 6. DT-010 protected against Dox-induced toxicity in H9c2 cells. (A,B) H9c2 cells were treated with different concentrations of DT-010 for 24 h and the toxicity of DT-010 in H9c2 cells was measured by LDH assay and MTT assay, respectively. Dox treatment for 24 h significantly increased the cytotoxicity (C) and decreased cell viability (D) in H9c2 cells, which were reversed by DT-010 co-treatment. #P < 0.05 vs. Ctrl and ∗P < 0.05 vs. Dox.

We have shown that DT-010, a derivative of danshensu (DSS) and TM), exhibits anti-tumor effects in breast cancer cells via the inhibition of mitochondrial complex II, resulting in ROS generation and mitochondrial dysfunction (Wang et al., 2016). DSS is a major ingredient of Danshen, which is one of the most commonly used Chinese herbs for the treatment of cardiovascular disease (Cui et al., 2013; Yin et al., 2013; Yu et al., 2014). TMP, a major alkaloid ingredient of the Chinese herb Chuanxiong, shows pharmacological effects such as anti-oxidation, anti-apoptosis, and protection against ischemic brain injury (Liao et al., 2004; Juan et al., 2007; Sue et al., 2009). On the other hand, TMP also displays anti-cancer effects and overcomes Dox-resistance in MCF-7 breast cancer cells (Zhang et al., 2012; Yi et al., 2013). Based on previous study, we further evaluated the potential synergistic anti-tumor effects of DT-010 with Dox in MCF-7 cells. We found that DT-010 and Dox co-treatment displayed much better anti-tumor effects than its parental compounds, separately or in combination, in the presence of Dox. Further study showed that Dox induced apoptosis in MCF-7 cells, which was further increased after DT-010 co-treatment.

A growing body of evidence shows that inhibition of glycolysis may kill cancer cells, overcome multidrug resistance and enhancing the efficacy of chemotherapeutic agents, thereby suggesting that glycolysis is a novel target for cancer therapy. Glycolysis inhibitors such as 2-deoxyglocose, 3-bromopyruvate, and lonidamine decrease ATP levels in cancer cells and display anti-cancer effects both in vitro and in vivo (Pelicano et al., 2006). Overexpression of SIRT3 has been shown to inhibit tumor proliferation through the repression of glycolysis (Finley et al., 2011). 2-DG increases the chemotherapeutic efficacy of Dox and paclitaxel in cancer cells in vivo (Maschek et al., 2004). Inhibition of glycolysis also enhances the sensitivity of multidrug-resistant cells to anti-cancer agents (Xu et al., 2005). Our data showed that DT-010 inhibited glycolytic capacity, glycolytic reserve and lactate level of MCF-7 cells, improving the anti-cancer effects of Dox in MCF-7 cells, which is consistent with prior studies showing inhibition of glycolysis as a relevant strategy for improving effects of conventional chemotherapeutic drugs such as Dox.

In this study, we also investigated the cardioprotective effects of DT-010 on Dox-induced cardiotoxicity. The data showed that Dox triggered toxicity in H9c2 cells, which was significantly inhibited by DT-010 co-treatment.

Copyright © 2016 Wang, Chan, Zhou, Cui, Yan, Wang, Yan, Di, Wang, Hoi, Shan and Lee. This is an open-access article distributed under the terms of the Creative Commons Attribution License (CC BY). The use, distribution or reproduction in other forums is permitted, provided the original author(s) or licensor are credited and that the original publication in this journal is cited, in accordance with accepted academic practice. No use, distribution or reproduction is permitted which does not comply with these terms.