The increasing prescription of opioids is fueling an epidemic of addiction and overdose deaths. Morphine is a highly addictive drug characterized by a high relapse rate – even after a long period of abstinence. Serotonin (5-HT) neurotransmission participates in the development of morphine dependence, as well as the expression of morphine withdrawal. In this study, we examined the effect of blockade of 5-HT2A receptors (5-HT2ARs) on morphine-induced behavioral sensitization and withdrawal in male mice. 5-HT2AR antagonist MDL 11,939 (0.5 mg/kg, i.p.) suppressed acute morphine (5.0 mg/kg, s.c.)-induced increase in locomotor activity. Mice received morphine (10 mg/kg, s.c.) twice a day for 3 days and then drug treatment was suspended for 5 days. On day 9, a challenge dose of morphine (10 mg/kg) was administered to induce the expression of behavioral sensitization. MDL 11,939 (0.5 mg/kg, i.p.) pretreatment suppressed the expression of morphine-induced behavioral sensitization. Another cohort of mice received increasing doses of morphine over a 7-day period to induce morphine-dependence. MDL 11,939 (0.5 mg/kg, i.p.) prevented naloxone-precipitated withdrawal in morphine-dependent mice on day 7. Moreover, chronic morphine treatment increased 5-HT2AR protein level and decreased the phosphorylation of extracellular signal-regulated kinases in the prefrontal cortex. Together, these results by the first time demonstrate that 5-HT2ARs modulate opioid dependence and blockade of 5-HT2AR may represent a novel strategy for the treatment of morphine use disorders.

(i) Blockade of 5-HT2A receptors suppresses the expression of morphine-induced behavioral sensitization.

Morphine and other prescription opioids are the mainstay clinical treatment for moderate to severe acute pain. The increasing prescription of opioids is fueling an epidemic of addiction and overdose deaths (Volkow et al., 2014). In addition, there has been an alarming rise in the illegal use of opioids in the United States over the past two decades (Varrassi and Muller-Schwefe, 2012). Morphine is a highly addictive opioid and the rate of relapse is remarkably high – even after long periods of abstinence (Blondell et al., 2013). The neural mechanisms underlying morphine addiction and relapse remain elusive (Volkow et al., 2014).

Chronic opioid treatment can induce a behavioral sensitization, a key factor critical for the acquisition and maintenance of compulsive drug-seeking behavior. The behavioral sensitization may reflect the neuroplasticity associated with addictive drug exposure that causes hyperactivity of neurons that innervate the NAc, such as dopaminergic neurons in VTA, glutamatergic neurons in PFC and basolateral amygdala (BLA; Kalivas and Stewart, 1991). Physical dependence or withdrawal also play a critical role in the reinstatement of drug-seeking behaviors (Robinson and Berridge, 1993). In the present study we investigated the effect of 5-HT2AR blockade with MDL 11,939, a potent and selective antagonist for 5-HT2AR (Ki values are 0.54 and 2.5 nM at rabbit 5-HT2AR and human 5-HT2AR, respectively), on morphine-induced behavioral sensitization and withdrawal symptoms and further explored the effect of chronic morphine treatment on 5-HT2AR protein level and ERK phosphorylation in mice. Glemanserin (MDL 11,939) has been investigated clinically for the treatment of generalized anxiety disorder (Sramek et al., 1995). Our data revealed that MDL 11,939 suppressed morphine-induced increase in locomotor activity, behavioral sensitization and withdrawal symptoms in male mice.

Adult male Kunming mice at 22 ± 2 gram came from the Experimental Animal Center of Anhui Medical University (Hefei, China) and housed in groups of four per cage with ad libitum access to food and water. Mouse cages were maintained in a temperature and humidity controlled vivarium with 12/12 h light/dark cycle (lights on at 7:00 am) for at least 1 week prior to experiments. All procedures conducted were in accordance with the guidelines in the National Institutes of Health Guide for the Care and Use of Laboratory Animals and were approved by the Institutional Animal Care and Use Committee at Anhui Medical University.

The morphine-induced behavioral sensitization mouse model was developed based on our previous publication (Zhang et al., 2016b). In brief, mice received morphine (10 mg/kg, s.c.) twice a day (8:00 am and 7:00 pm) for 3 days and then morphine injection was suspended for 5 days. On day 9, a challenge dose of morphine (10 mg/kg, s.c.) was given and the locomotor activity was recorded immediately for 1 h (Li et al., 2008). To examine whether 5-HT2ARs affect the expression of behavioral sensitization, MDL 11,939 (0.5 mg/kg, i.p.) was administered 20 min prior to morphine challenge on day 9 to examine behavioral changes.

Induction of Morphine Dependence and Withdrawal

The morphine-induced dependence and withdrawal mouse model was developed based on our previous publication (Zhang et al., 2016b). In brief, mice received morphine three times per day starting at a dose of 5 mg/kg (s.c.) and the dose was increased each day until reaching 100 mg/kg by day 6. On day 7, morphine (100 mg/kg, s.c.) was administered at 8:00 am and 2:00 pm. 2.5 h later, the mice received vehicle or MDL 11,939 (0.5 mg/kg, i.p.) treatment followed by naloxone challenge (5.0 mg/kg, i.p.) 15 min later to precipitate morphine withdrawal symptoms. Mice were placed individually into square observation chambers (30 cm × 30 cm × 35 cm tall) and closely observed for 30 min immediately after naloxone challenge.

Horizontal distance traveled and other behavioral phenotypes were tracked with EthoVision XT 5.1 PhenoTyper system (Noldus Information Technology, Wageningen, The Netherlands). The EthoVision software detected the mouse in static subtraction mode (a white mouse on a black background) in each video frame (29.97 fps) and tracked the movement of the digitized pixels that represent the “center point” of the mouse. Distance traveled and immobility were used to assess locomotor activity. A mouse that reared or was grooming would not be detected as immobile (Wu et al., 2015; Zhang et al., 2016b). The withdrawal symptoms quantified included jumping (all feet off the floor), burrowing (escape digging), body grooming, rearing (front feet off the floor), wet dog shakes (whole body shakes), and other behaviors for 30 min (Wu et al., 2015; Zhang et al., 2016b).

Brains from the mice receiving the escalating morphine treatment were rapidly harvested on day 7 and then stored at -80°C before processing for 5-HT2AR WB. The selected brain regions from two mice were pooled together to obtain a sufficient amount of protein necessary for perform WB analysis. Tissue samples obtained from the PFC and hippocampus were homogenized in ice-cold RIPA lysis buffer before centrifuging at 15,000 × g at 4°C for 10 min. The supernatant was collected as total proteins and the protein concentration was examined using a BCA protein assay kit. Samples containing 30 μg proteins were separated by 12% SDS-polyacrylamide gel and, then, transferred to polyvinylidene difluoride (PVDF) membranes. After blocking with 5% (w/v) non-fat dry milk and washing in Tris-buffered saline containing 0.1% v/v tween-20 (TBST), the membrane loaded was incubated with the primary antibody (1:100) at 4°C overnight followed by incubation with horseradish peroxidase-conjugated secondary antibody (goat anti-mouse; 1:10,000). Protein bands were visualized by an enhanced chemiluminescent substrate (Thermo Fisher Scientific Inc. Waltham, MA, USA) and captured by the Bioshine ChemiQ4600 imaging system (Shanghai Bioshine Scientific instrument Co., Ltd, Shanghai, China). Densitometry (mean of gray scale) was performed using ImageJ software (NIH). 5-HT2AR densitometry values were normalized to corresponding β-actin immunoreactivity in the same lane to reduce any loading and transfer variances among the samples (Zhang et al., 2016b). Each group consists of 3–4 trials.

Mice received increasing doses of morphine over 7 days to develop morphine dependence, and brain tissue was harvested 2.5 h after last morphine injection. 5-HT2AR, pERK and ERK levels in PFC and hippocampus were detected using WB assay. Chronic morphine treatment was associated with an increase in 5-HT2CR expression [t(4) = 3.75, p = 0.02], and a decrease in the ratio of pERK/ERK in PFC [t(6) = 5.43, p = 0.001] (Figure 4) compared with the vehicle treatment. Similarly, morphine treatment induced a trend of increase in 5-HT2AR expression and a trend of decrease in ERK phosphorylation in hippocampus. 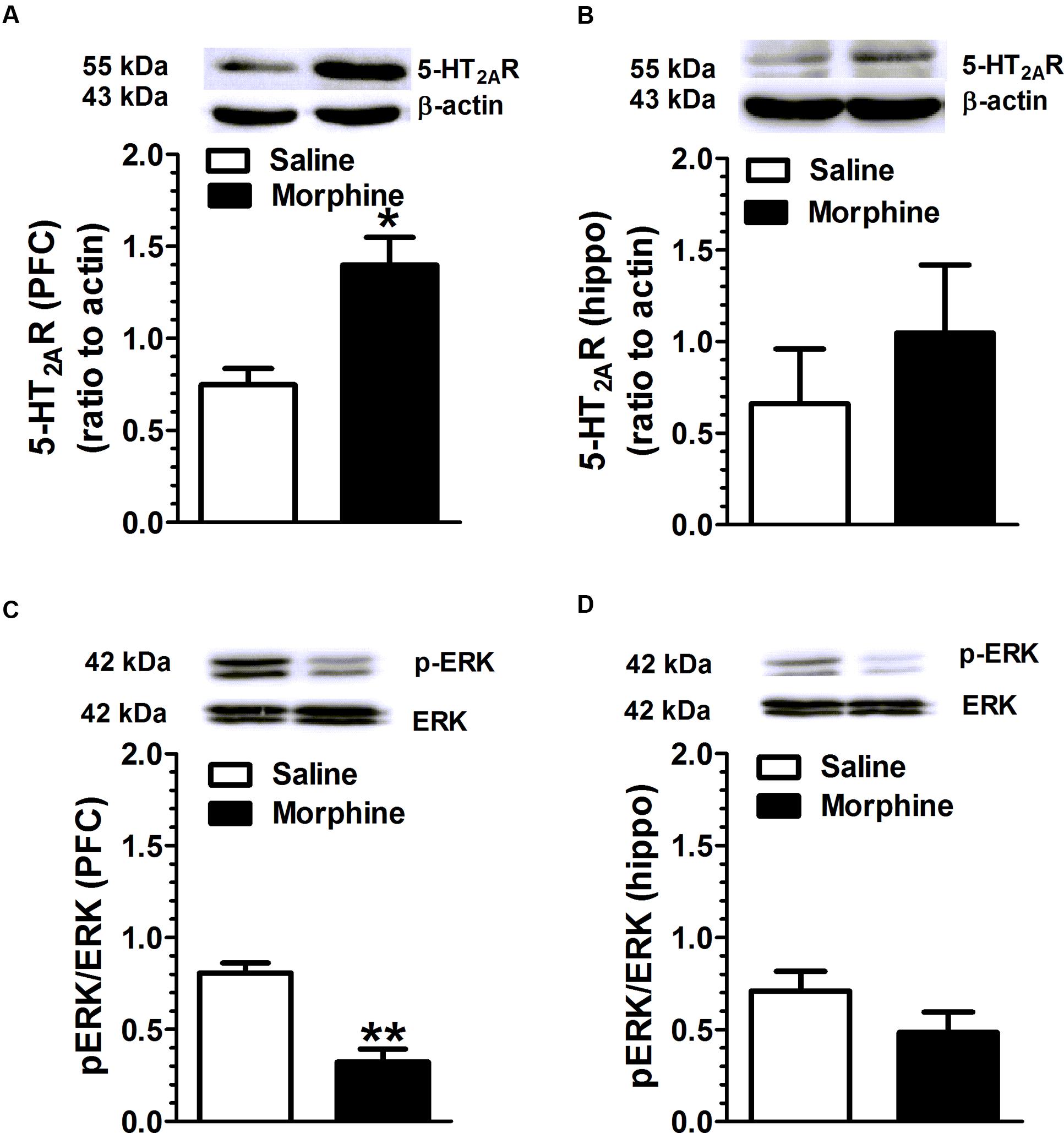 The present studies examined the modulation of 5-HT2ARs on morphine-induced increases in locomotor activity, behavioral sensitization, and withdrawal in mice. Our results indicated that blockade of 5-HT2ARs with MDL 11,939 suppressed morphine-induced hyperactivity, behavioral sensitization, and naloxone-precipitated withdrawal symptoms. Moreover, repeated morphine treatment was associated with an increase in 5-HT2AR expression and a decrease in ERK phosphorylation in PFC. Together, these results by the first time demonstrates that 5-HT2ARs modulate morphine dependence and pharmacological blockade of 5-HT2ARs may be a novel strategy for the treatment of opioid use disorders.

Results from WB assay revealed that chronic morphine treatment increased 5-HT2AR protein expression and decreased in ERK phosphorylation in PFC. The PFC is a critical brain region associated with drug addictive behaviors. For example, Chemical lesions of the mPFC disrupt the development of cocaine and amphetamine-induced sensitization (Wolf et al., 1995), suggesting that increase in 5-HT2AR expression is a critical neuroadaptative component resulted from morphine exposure. The signaling and functional significances of the morphine-induced 5-HT2AR protein overexpression remains illusive. Identify the subcellular distribution of 5-HT2ARs, receptor signaling and functional characteristics will be necessary to understand the protein change. Interestingly, ERK phosphorylation was decreased in both the PFC and hippocampus to chronic morphine treatment. Although activation of 5-HT2ARs can increase pERK1/2 formation (Millan et al., 2008; Masson et al., 2012), ERK phosphorylation is regulated by multiple cellular signals, and the inconsistency between 5-HT2AR expression and pERK accumulation may be attributed to other factors.

MDL 11,939 is a potent and selective 5-HT2AR antagonist. Glemanserin (MDL 11,939) was clinically investigated for the treatment of generalized anxiety disorder due to its efficacy, safety, as well as the probability to cross the blood-brain barrier (Sramek et al., 1995). In the present study, we used MDL 11,939 as a tool to explore the neurobiological mechanism of morphine-induced behavioral change. Based on our data, MDL 11,939 may serve as a medical treatment for morphine use disorders in human. 5-HT2ARs are expressed predominately in nociceptive sensory neurons in lumbar dorsal root ganglia and participate in pain regulation (Van Steenwinckel et al., 2009). MDL 11,939 has been show to suppress 2′,3′-dideoxycytidine-induced neuropathic pain in rats; 5-HT2AR knock-out mice did not develop 2′,3′-dideoxycytidine-induced neuropathy (Van Steenwinckel et al., 2008). We previously demonstrated that MDL 11,939 could suppress acetic acid-induced acute pain, incision pain and sciatic nerve ligation neuropathic pain in mice (unpublished). The influence of MDL 11,939 on anxiety and pain may participate in its effects on morphine-induced behavioral changes.

The present studies revealed that blockade of 5-HT2AR suppresses the expression of morphine-induced behavioral sensitization and ameliorates naloxone-precipitated withdrawal symptoms. In addition, chronic morphine exposure increase 5-HT2AR protein level within the PFC. 5-HT2AR may be a potential target for the treatment of morphine use disorders.

We thank Sarah Cohen and David Cinalli for proofreading this manuscript.

The Supplementary Material for this article can be found online at: https://www.frontiersin.org/article/10.3389/fphar.2016.00514/full#supplementary-material

Copyright © 2016 Pang, Wu, Tao, Mao, Liu, Zhang, Li, Stackman, Dong and Zhang. This is an open-access article distributed under the terms of the Creative Commons Attribution License (CC BY). The use, distribution or reproduction in other forums is permitted, provided the original author(s) or licensor are credited and that the original publication in this journal is cited, in accordance with accepted academic practice. No use, distribution or reproduction is permitted which does not comply with these terms.

Molecular targets for the treatment of alcohol and drug dependence.