Background: Neonatal jaundice is a relatively prevalent disease and affects approximately 2.4–15% newborns. Probiotics supplementation therapy could assist to improve the recovery of neonatal jaundice, through enhancing immunity mainly by regulating bacterial colonies. However, there is limited evidence regarding the effect of probiotics on bilirubin level in neonates. Therefore, this study aims at systematically evaluating the efficacy and safety of probiotics supplement therapy for pathological neonatal jaundice.

Conclusion: This meta-analysis shows that probiotics supplementation therapy is an effective and safe treatment for pathological neonatal jaundice.

Neonatal jaundice is one of the most common conditions need medical care and affects approximately 2.4–15% of newborn babies during the first 2 weeks of life (Kelly and Stanton, 1995). About 60% of term and 80% of preterm infants develop jaundice in the first week of life and about 10% of breastfed babies are still jaundiced at 1 month (Xiong et al., 2012). The most common symptom in an infant with jaundice is the yellow discoloration of skin and sclera of neonates. It is caused by a raised level of bilirubin, a condition known as hyperbilirubinaemia (Rennie et al., 2010). The most common form of hyperbilirubinaemia observed in neonates is caused by unconjugated or unbound bilirubin (Carlo et al., 2015). Extreme elevation of unconjugated bilirubin can result in kernicterus, or even death.

Nowadays, probiotics attracts increased more and more attention, they are defined as live microorganisms, which may have health benefits for the host if consumed in adequate amounts (Harsharn and Jaya, 2008). The most commonly used probiotics are lactic acid bacteria and non-pathogenic yeasts (Eamonn, 2011). It has been demonstrated that probiotics could be applied to regulating the gastrointestinal disease, such as diarrhea, neonatal necrotizing enterocolitis, Helicobacter pylori eradication (Behnsen et al., 2013). Recently, probiotics and their products are well studied for their health benefit effects on immunomodulatory, type 2 diabetes, hypertension, neonatal jaundice and so on (Marta and Józef, 2015).

In recent years, probiotics has been used in the treatment of jaundice. Funda et al. suggested that Bifidobacterium species may protect against breast milk jaundice and probiotics may be protective against hyperbilirubinemia by affecting intestinal motility and intestinal microbial flora (Funda et al., 2013). Geyik et al. demonstrated that Saccharomyces boulardii has an effect on preventing bacterial translocation and improvement of intestinal barrier function in an obstructive jaundice animal model (Geyik et al., 2006). Claire et al. also showed the probiotic had an effect on obstructive jaundice through modulation of gut barrier function (Claire et al., 2013). The efficacy of probiotics depends upon their ability to pass through the stomach and duodenum, and colonize in the intestinal lumen, to reduce the overgrowth of bacteria in the small bowel, restore gastrointestinal barrier function and modulate the immune system (Eamonn, 2011).

The effect of probiotics in the treatment of neonatal jaundice is a new area for researchers and clinicians (Ozge et al., 2015). In clinical, besides from phototherapy, drugs, massage therapy, acupuncture treatment or exchange transfusion, probiotics supplementation therapy could assist to improve the recovery of neonatal jaundice, through enhancing immunity mainly by regulating bacterial colonies. They can form a biological barrier by specifically binding intestinal epithelial cells through teichoic acid (Ohland and Macnaughton, 2010). However, there is limited evidence regarding the effect of probiotics on bilirubin level in neonates. Therefore, this study aims at systematically evaluating the efficacy and safety of probiotics supplement for pathological neonatal jaundice.

The following principal search terms and MESH headings were used: “probiotics” or “probiotic” or “Lactobacillus” or “Bifidobacterium” or “S. boulardii” or “yeast” or “yogurt” and “neonatal jaundice” or “neonatal hyperbilirubinaemia.” We would look for additional studies in reference lists of selected articles, contact with authors about knowledge of published or unpublished articles. The results of searches would be crosschecked in order to eliminate duplicates. The deadline of all retrieval was December 2016.

The following studies were included in analysis: (1) randomized controlled trials using clear and adequate randomization methods; (2) jaundice within 24 h after birth; (3) serum total bilirubin concentration increases more than 85.5 μmol/L (5 mg/dl) per day or more than 8.5 μmol/L per h; (4) studies published in either English or Chinese; (5) studies compared at least two treatment groups with (a) control patients underwent routine comprehensive treatment (includes phototherapy, enzyme inducer, immunoglobulin supportive treatment and so on) or phototherapy (b) patients received identical routine comprehensive treatment plus probiotics or identical phototherapy plus probiotics. (6) All studies were though the ethics review committee.

Data extraction form designed according to Cochrane Systematic Review Handbook (version 5.3) was used to extract the relevant information from each RCT independently. Two independent reviewers screened all the titles and abstracts to determine potential eligible articles. They independently and blindly applied the eligibility criteria to perform the final selection. When discrepancies occurred between both reviewers regarding the inclusion of the articles, they would discuss and identify the reasons to include or exclude the articles and then make the final decision. If they could not reach an agreement, the final decision would be based on a third reviewer.

The Cochrane risk of bias tool was used to assess the risk of bias in RCT studies. The six domains of this tool included random sequence generation, allocation concealment, blinding of participants and personnel, blinding of outcome data, incomplete outcome data and selective reporting. The judgment was marked as “high risk,” “unclear risk,” or “low risk.” Trials that met all the criteria were categorized as low risk of bias, whereas those that met none were high risk of bias. The others were classified as unclear risk of bias if the information was insufficient to make a judgment.

Characteristics of the Included Studies 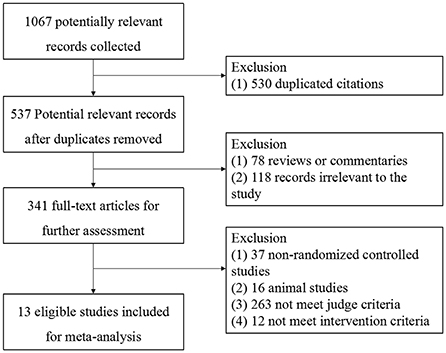 According to Cochrane risk of bias estimation, all trials were mentioned random. But only 9 trials referred to the specific method of random. Eleven trials performed on allocation concealment. Three trials performed blinding of participants, personnel assessment, and blinding of outcome assessment. All the trials reported on complete outcome data and selective reporting. Eight trials were low risk in other bias (Figure 2).

Figure 2. Methodological quality assessment for risk of bias for each included study.

We also recognized that our study had limitations. First, because the value of jaundice fading in each guideline was different, the heterogeneity was high in time of jaundice fading. It suggested we should use the same guideline to detect the time of jaundice fading in future study. Second, according to Cochrane risk of bias estimation, randomized allocation of participants was mentioned in 9 trials. Most of the included studies only mentioned the use of random allocation, but they did not describe the specific random allocation method. So, it was hard for us to determine whether the allocation scheme was appropriate and whether blinding of participants and personnel was implemented. Some studies showed that unclear random allocation and allocation plan might exaggerate the hidden effect of up to 30–41% (Juni et al., 2001). Third, since RCTs of included studies centered in a short observation period and did not follow up the patients in long term, the methodological quality of clinical trials with probiotics supplementation therapy for neonatal jaundice needed further improvement. Therefore, well designed, large randomized, double blind, placebo-controlled trials would be required to further confirm the efficacy of probiotics. All of the outcome measures should be monitored by a standardized effective report system in clinical trials and rare serious adverse reaction could be observed through epidemiological studies.

This systematic review and meta-analysis indicates that probiotics supplementation therapy is an effective and safe therapy option for the treatment of pathological neonatal jaundice with no serious adverse reaction. However, as the quality of included studies and the limitations of samples, the long-term efficacy and safety still need long-term and high-quality research confirmed.

ZC analyzed the data and wrote the manuscript. LJ, GG, and ZZ collected and prepared samples. LZe and XY performed the analyses. LZh designed the study and amended the paper.

This research is funded by Natural Science Foundation of China: Evidence based establishment of evaluation index system for pediatric rational drug use in China (No. 81373381) and program for Yangtze River Scholars and Innovative Research Team in University (No. IRT0935).

The reviewer XT and handling Editor declared their shared affiliation, and the handling Editor states that the process nevertheless met the standards of a fair and objective review.

We thank Group of People with Highest Risk of Drug Exposure of International Network for the Rational Use of Drugs, China for providing support to coordinate circulation of the manuscript to all co-authors and collect comments from all co-authors.

Copyright © 2017 Chen, Zhang, Zeng, Yang, Jiang, Gui and Zhang. This is an open-access article distributed under the terms of the Creative Commons Attribution License (CC BY). The use, distribution or reproduction in other forums is permitted, provided the original author(s) or licensor are credited and that the original publication in this journal is cited, in accordance with accepted academic practice. No use, distribution or reproduction is permitted which does not comply with these terms.