Other unusual forms of pulmonary hypertension include pulmonary hypertension related to mediastinal fibrosis (Seferian et al., 2015) and the use of serotonergic drugs (Seferian et al., 2013). Mediastinal fibrosis (fibrosing mediastinitis) is a rare condition characterized by proliferation of fibrous tissues in the mediastinum often associated with granulomatous diseases, such as histoplasmosis, tuberculosis and sarcoidosis and other fibro-inflammatory and autoimmune diseases (Rossi et al., 2016). It can be induced iatrogenically in relation to previous mediastinal irradiation and treatment with methysergide maleate (Graham et al., 1966), an ergot-derived serotonin antagonists previously used in the treatment of migraine. Mediastinal fibrosis can cause compression and obliteration of vital mediastinal structures, i.e., the airways, esophagus and great vessels (Sherrick et al., 1994). Thin-walled vessels with low intraluminal pressure, such as superior vena cava and less frequently, the pulmonary arteries, are especially subjected to compression by mediastinal masses resulting in increased intravascular pressure. Due to its extended course through the mediastinum, the right pulmonary artery is more susceptible to mediastinal processes compared to the left pulmonary artery.

Serotonin is a potent vasoconstrictor and mitogen that causes smooth muscle cell hyperplasia and hypertrophy. There is much evidence that it is involved in the pathogenesis of pulmonary hypertension (Egermayer et al., 1999). In addition, an association between the appetite suppressants, fenfluramine derivatives, and pulmonary hypertension is well-established. Fenfluramine derivatives cause increased serotonin levels by acting as serotonin uptake inhibitors and induce transport-mediated serotonin release (Seferian et al., 2013). However, whether other serotonergic drugs, such as ergot-derived dopamine agonists, are associated with an increased risk of developing pulmonary hypertension remains unclear. Here, we describe a patient on ergot-derived dopamine agonist therapy for hyperprolactinemia that had diffuse mediastinal fibrosis and pulmonary hypertension mimicking CTEPH.

A 36-year-old woman, who presented with progressive exertional dyspnea over 6 months, was referred to us as a potential candidate for pulmonary endarterectomy with a presumptive diagnosis of CTEPH, for which she was receiving anticoagulation treatment. She did not report any chest pain or episodes of syncope. She was diagnosed with a microprolactinoma after experiencing galactorrhoea 7 years earlier, for which she received low-dose cabergoline treatment (0.5 mg/week) for a year before switching to bromocriptine (2.5 mg/day) when she wished to become pregnant. She took bromocriptine for a year until she became pregnant and the treatment was paused. Shortly after a non-problematic pregnancy and childbirth, low-dose cabergoline treatment (0.5 mg/week) was resumed. In total, the patient had received ∼160 mg cabergoline and ∼900 mg bromocriptine and her prolactin level remained within normal range on treatment. She was a non-smoker and was on birth control pills for several years. The medical history on the father’s side was unknown and there was nothing remarkable on the mother’s side.

Clinical examination of the patient revealed a systolic murmur and reduced breath sound in the right lung. The 6-min-walk-distance was reduced to 259 m. An electrocardiogram showed T-wave inversion in leads V3 and V4. Creatine kinase MB isoenzyme and troponin T levels were within normal range. However, the level of the NT-proBNP was elevated to 2899 ng/L. Transthoracic echocardiography revealed a moderately dilated right ventricle with impaired function and moderate tricuspid regurgitation with a gradient of 92 mmHg. Subsequent right heart catheterization showed severe pre-capillary pulmonary hypertension with a mean pulmonary arterial pressure of 52 mmHg and pulmonary vascular resistance of 880 dyn.s/cm5 (a summary of main findings are listed in Table 1). HRCT showed significantly thickened left and right pulmonary arteries, elevated right hemidiaphragm and non-specific infiltrates in the right lower lung. There was no evidence of mediastinal lymphadenopathy. CT pulmonary angiography revealed near-complete occlusion of the right pulmonary artery and severe, short-segment stenosis as well as wall irregularities in the left lobar and segmental pulmonary arteries. Similar findings were observed during digital subtraction angiography (Figure 1). PET-CT did not show any pathological FDG-uptake. V/Q scintigraphy revealed absent perfusion to the right lung that was not matched to the ventilation and several segmental and sub-segmental mismatched perfusion defects in the left lung. Spirometry showed reduced lung function of a restrictive pattern. Biochemical and serological screening for thrombophilia, autoimmune diseases and systemic connective tissue diseases were all negative. Based on results from the above-mentioned investigations, CTEPH as a consequence of previous subclinical pulmonary embolism was initially considered the most plausible diagnosis. 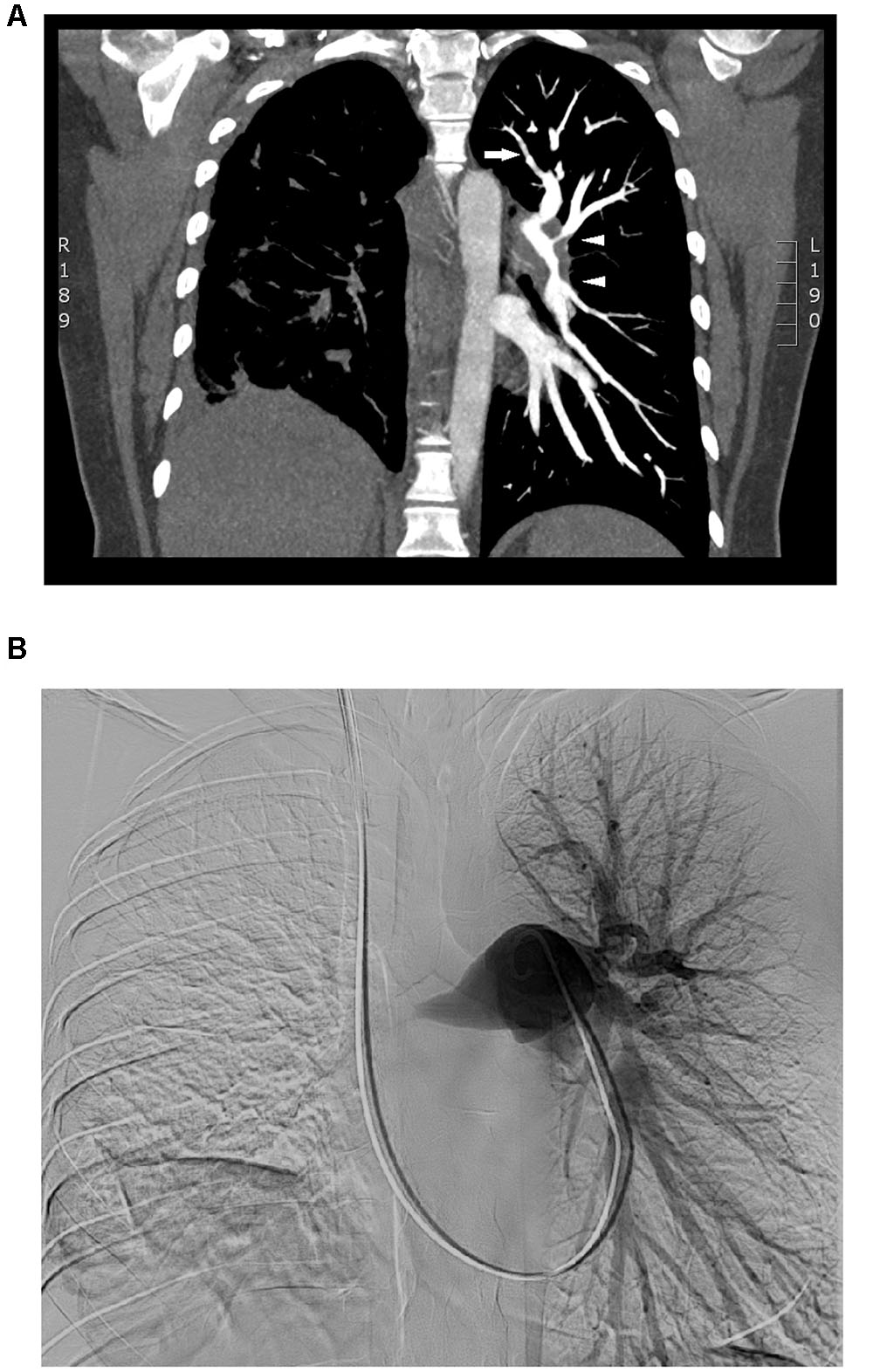 Pulmonary endarterectomy was attempted 7 months later, during which, loose fibrous tissues were observed around the aorta, main pulmonary artery and superior vena cava. The right pulmonary artery appeared stiff and cryosection of the artery showed fibrosis and chronic inflammation. In light of the new findings, which were not compatible with CTEPH, pulmonary endarterectomy was aborted. Cabergoline treatment was discontinued immediately after the attempted endarterectomy as it was suspected to have caused the fibrotic changes and anticoagulation therapy was discontinued a few days later. Histologic examination of the right pulmonary artery biopsy (Figure 2) confirmed the cryosection results. Immunohistochemical screening for overexpression of MUM1, a lymphocyte-specific transcription factor associated with a wide range of hematolymphoid neoplasms (Natkunam et al., 2001), and IgG4, which can be associated with idiopathic fibro-inflammatory disorders (Rossi et al., 2016), were negative. Subsequent bronchoscopy showed no endobronchial abnormalities. Endobronchial biopsy and transbronchial needle aspiration biopsy showed nonspecific changes with no evidence of malignancy or granulomatous inflammation. Repeat HRCT showed pleural thickening and no evidence of retroperitoneal fibrosis. Repeat PET-CT showed hypermetabolic activity around the lung hila and aortic arch and in the right lung. Based on the clinical findings, histopathology and after ruling out other possible diseases, a diagnosis of mediastinal and pleuropulmonary fibrosis was made. 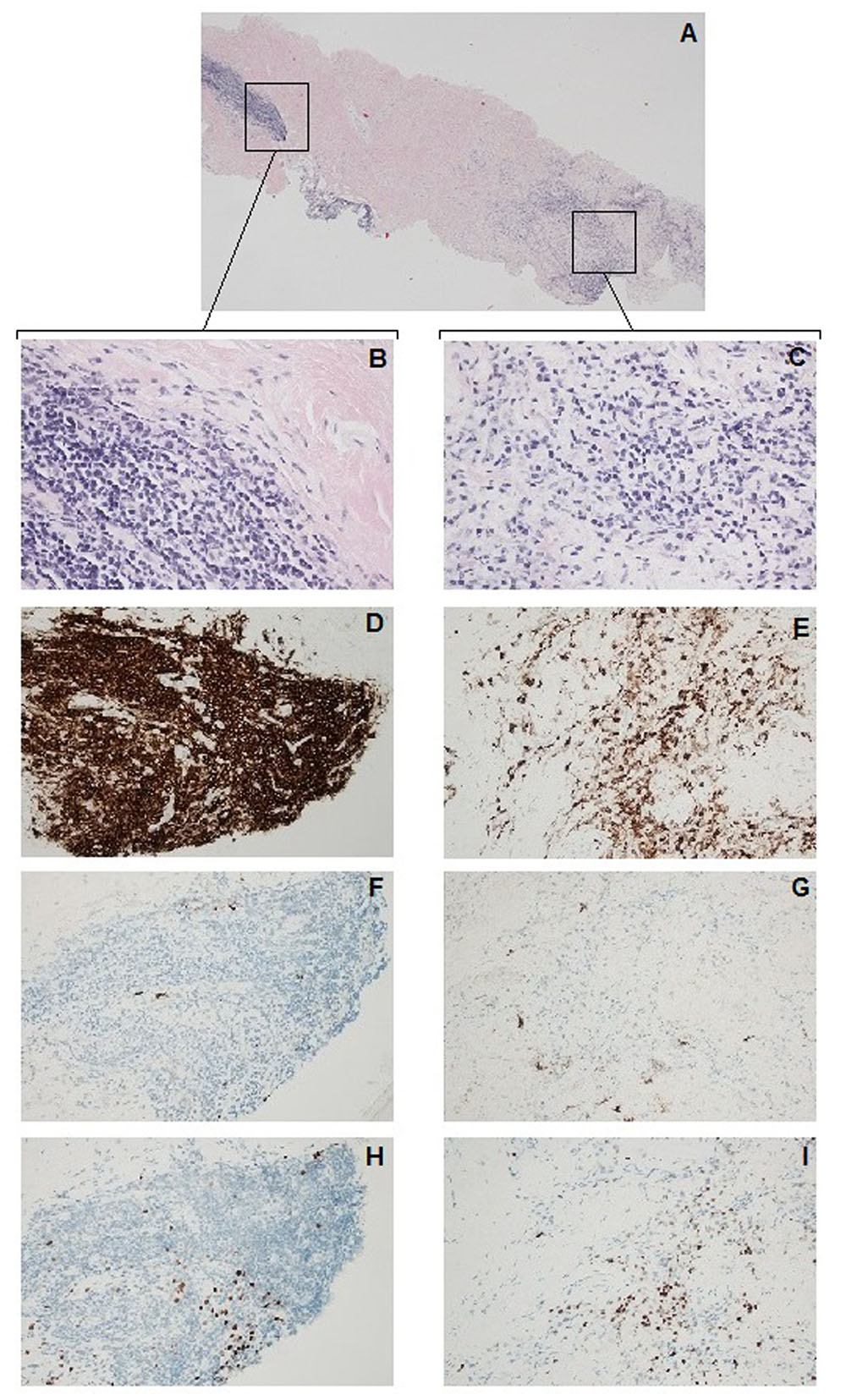 In the year that followed, the patient was monitored biweekly. Her prolactin level remained within normal range without dopamine agonist treatment. She received immunosuppressive therapy, prednisolone, methotrexate and mycophenolate mofetil, as well as pulmonary hypertension treatment, sildenafil, spironolactone and bumetanide. However, her symptoms deteriorated despite radiological signs of disease regression. She was hospitalized several times due to hemoptysis and opportunistic infections. Endovascular stenting of the right pulmonary artery was considered unsafe due to a high risk of arterial rupture. Double lung transplantation was assessed to be technically feasible and after much deliberation and detailed discussions at multidisciplinary meetings, it was considered the only option and the patient was admitted for the procedure. Upon sternotomy, the right lung appeared fibrotic and atelectic. It was adhered to the inner chest wall and appeared to be receiving part of its blood supply from the chest wall. Sadly, although the donor lungs were transplanted, the patient died on the operating table due to uncontainable bleeding from the chest wall and intercostal arteries.

We have presented an unusual complex case of pulmonary hypertension. It remains unclear whether this is a case of pulmonary hypertension complicating mediastinal fibrosis or multi-organ affection with concurrent fibrotic changes in the mediastinum, pulmonary artery, right lung, and pleura. It is debatable whether there is an association with the ergot-derived dopamine agonists, cabergoline and bromocriptine, that the patient had received.

Pulmonary hypertension complicating mediastinal fibrosis shares many similarities with proximal CTEPH including perfusion defects on CTPA and V/Q scintigraphy (Seferian et al., 2015), both of which have a high sensitivity for the diagnosis of CTEPH (Galie et al., 2016). The most common pattern of mediastinal fibrosis on CT is large, localized soft tissue masses with or without calcifications, while diffuse homogeneous soft tissue processes are less common (Sherrick et al., 1994; Worrell et al., 2007). Hence, the lack of clear radiological evidence of mediastinal masses, lymphadenopathy and/or extrinsic compression and encasement of the pulmonary arteries by neighboring tissues (Seferian et al., 2015) and the nonspecific lung parenchymal affection in this patient led to the incorrect diagnosis of CTEPH. Due to the variable etiologies and clinical presentations, there is no standard therapy for mediastinal fibrosis. Pharmacology treatment is often ineffective. However, there are reports of successful treatment with corticosteroids and mycophenolate mofetil (Lal et al., 2005; Ikeda et al., 2007; Witschi et al., 2009). Pulmonary hypertension related to mediastinal fibrosis is associated with a poor prognosis. Invasive interventions include endovascular stenting and bypassing or reconstructing an obstructed pulmonary artery (Brown et al., 2009; Seferian et al., 2015). In the current patient case, as pharmacological treatment was unsuccessful and direct manipulation of the right pulmonary artery was associated with a high risk of artery rupture due to the extensive fibrotic changes, lung transplantation was considered the only option. To the best of our knowledge, this is the first described case of attempted lung transplantation in a patient with mediastinal fibrosis, which, regrettably, was unsuccessful.

Ergot-derived dopamine agonists, such as cabergoline, pergolide and bromocriptine, can induce cardiac valve fibrosis and less frequently, non-cardiac fibrotic changes, such as pleuropulmonary and retroperitoneal fibrosis, especially in patients on long-term high-dose treatment for Parkinson’s disease, usually a cumulative dose >2000 mg in the case of cabergoline. The underlying mechanism is attributed to their interaction with serotonin receptors (Schade et al., 2007; Zanettini et al., 2007; Andersohn and Garbe, 2009). Low-dose treatment for hyperprolactinemia is not associated with an increased risk of clinically significant cardiac valvulopathy. However, mild to moderate tricuspid regurgitation and subclinical fibrotic lesions appear to be more prevalent during cabergoline and bromocriptine treatment and pulmonary arterial pressure, obtained on transthoracic echocardiography, was reported to be higher, but within normal range, in patients receiving bromocriptine (Elenkova et al., 2012; De Vecchis et al., 2013).

Drug-induced pulmonary hypertension is well-recognized. The best documented are the sympathomimetic anorexigens, aminorex, benfluorex and other fenfluramine derivatives, that have direct and indirect serotonergic effects (Seferian et al., 2013). However, there is no clear evidence of a causal relationship between ergot-derived dopamine agonists and pulmonary hypertension. Pergolide and methyseride, both of which are ergot-derivatives, are possibly associated with pulmonary hypertension (Egermayer et al., 1999; Seferian et al., 2013). Cabergoline and bromocriptine display agonist properties at several serotonin receptors, including 5-HT1B, 5-HT2A, and 5-HT2B (bromocriptine is a 5-HT2B antagonist, however) (Newman-Tancredi et al., 2002), all of which are implicated in the development of pulmonary hypertension. 5-HT1B receptors mediate serotonin-induced pulmonary vasoconstriction and vascular smooth muscle hypertrophy and hyperplasia, 5-HT2A receptors induce pulmonary arterial adventitial fibroblast proliferation and 5-HT2B receptors are involved in right ventricular fibrosis (MacLean and Dempsie, 2010; Janssen et al., 2015). Consistent with this, macroscopic and microscopic structural changes were observed in the right pulmonary artery of our patient suggesting that pulmonary hypertension was caused by direct pulmonary artery affection possibly in addition to extrinsic compression caused by mediastinal fibrosis.

It remains undetermined whether cabergoline and/or bromocriptine treatment was the cause of mediastinal fibrosis and pulmonary hypertension in this patient. Further investigations are required to elucidate whether there is an association between ergot-derived dopamine agonists and mediastinal fibrosis and pulmonary hypertension. In conclusion as CT and V/Q scintigraphy findings can occasionally be deceptive, physicians should be particularly aware of differential diagnoses in patients without obvious history of venous thromboembolism that are suspected of having chronic thromboembolic pulmonary hypertension.

Our submission is a case report. Data was collected during the routine clinical care of the patient. Prior to her death, the patient had given written informed consent to participate in a research study conducted by our group that was approved by The National Committee on Health Research Ethics (reference M-2013-278-13), including permission to collect and publish clinical data in anonymized form. Confidentiality of the data has been ensured in accordance to the ICMJE guidelines.

SM and JC were involved in the care of the patient. JS, SM, and JC collected the data and all the authors (JS, US, JC, and SM) contributed to the interpretation of the data. JS drafted the manuscript and all the authors have revised it critically for important intellectual content and approved the final version of the manuscript and this submission.

Copyright © 2017 Su, Simonsen, Carlsen and Mellemkjaer. This is an open-access article distributed under the terms of the Creative Commons Attribution License (CC BY). The use, distribution or reproduction in other forums is permitted, provided the original author(s) or licensor are credited and that the original publication in this journal is cited, in accordance with accepted academic practice. No use, distribution or reproduction is permitted which does not comply with these terms.