Alternative sources of medicines like herbal medicines may soon become key components in the healthcare provision industry for both humans and animals especially in developing countries. These herbal medicines will fill a gap caused by a decrease in the number of new modern medicines being developed in the last few decades (especially in the case with anti-infectives), increasing costs, drug resistance, and side effects of modern pharmaceuticals.

Animal wounds as a result of work related, malicious, infectious or accidental damage to the skin are often associated with significant pain, malfunctioning, limited production, disability, bleeding, and death (Forrest, 1982). Wounds may be classified as open (with disruption of skin or mucous membrane continuity) or closed (no disruption of the continuity though underlying tissues will be damaged, e.g., bruises or hematomas). Most wounds, especially open wounds, are often associated with wide ranging bacterial, fungal, and viral floras. Although most of the bacterial infections can be managed using conventional antibiotics, there are several reports of multi-drug resistant bacteria (Nolff et al., 2016). Therefore, there is need for alternative therapies in wound management.

Natural products like herbal remedies have served human and animal populations in wound management for centuries due to their efficacy, accessibility, increasing scientific data on them and commercial interests (Barreto et al., 2014). Most plants or parts thereof contain phytoconstituents that have wide ranging properties like antimicrobial, anti-inflammatory, antioxidant, antipruritic, hypotensive, proliferative, hypoglycemic, and analgesic that are often key in wound management or healing (Ayyanar and Ignacimuthu, 2009; Barreto et al., 2014).

However, use of herbal medicines is increasing concerns on their safety as only about 10% are properly characterized and/or are being produced following strict quality standards (Ifeoma and Oluwakanyinsola, 2013). As plants do contain arrays of phytochemicals with significant toxic potentials to vital organs and other living tissues, evaluation of potential toxic effects of plants and their products is essential in ensuring safety (Jothy et al., 2011).

Extractions were based on methods used prior and had yielded phytochemicals that are known to have wide ranging biological effects (Marume et al., 2017). Fresh whole aerial plant parts samples from C. quadrangularis, whole aerial plant parts of A. multiflorum, leaf and bark samples of E. abyssinica were separately oven dried at 50°C for 48 h. Dried plant materials were ground into powders and extracted (1:20 w/v) with 50% aqueous methanol in an ultrasonic bath for 1 h. The extracts were filtered under vacuum through Whatman's No. 1 filter paper. The extracts were then concentrated under pressure using a rotary evaporator at 30°C and completely dried with a freeze drier overnight. The dried crude extracts were weighed and made into ointments at 10% (w/w) in white soft paraffin.

Wound healing properties of the freshly made ointments of C. quadrangularis, A. multiflorum, and E. abyssinica (leaf and bark separately) crude methanolic extracts were used in the assays. White soft paraffin was used as the negative control while the positive control was 3% oxytetracycline ointment (Biotet®), a well-known effective topical antibiotic.

The dorsal skin area of the test animals was shaved prior to the incision. Wounds (10 × 6 mm average) were cut on each mouse under sterile conditions (Karodi et al., 2009; Das, 2013). Chloroform was used for anesthesia to minimize pain and stress to the animals as a result of the wounding processes. The respective ointments were applied once daily after cleaning with sterile water and gauzes till day 15 (Karodi et al., 2009; Das, 2013). Wound sizes, contractions and other changes were measured and noted every 3 days. Histological evaluations of samples collected on day 15 were blindly conducted by a veterinary pathologist (Dr. Ellen Mwandiringana—Preclinical Department, Faculty of Veterinary Sciences, University of Zimbabwe, MP167, Mt. Pleasant Harare, Zimbabwe) and a histologist (Josephine Tendayi Chidaushe—Department of Anatomy, College of Health Sciences, MP167, Mt. Pleasant, Harare, Zimbabwe). All animal tissue samples collected were preserved for future use in formalin.

The crude protein content was estimated by titrimetric determination of nitrogen content following Kjeldahl digestion of the skin samples in sulfuric acid (H2SO4) using copper (Cu) catalyst (Lynch and Barbano, 1999; Magomya et al., 2014). Oven dried skin samples were cleaned using scalpel blades to remove furs and then powdered. Between 0.05 and 0.09 g of the analytical samples where digested at 300°C with 10 ml concentrated H2SO4, 2.8 g Na2SO4 and CuSO4 to a final blue/green color. After cooling and dilution with water, 40% w/v NaOH was used to neutralize the solution and the released NH3 was collected in boric acid-indicator solution which was then titrated against a standard 0.125M H2SO4. The respective titer values, sample mases and standard acid concentration were used to calculate percentage nitrogen content. The nitrogen content was then converted to percentage protein content estimates using a factor (6.25) (Lynch and Barbano, 1999; Magomya et al., 2014).

Data on wound contraction percentage area changes and crude protein content across the groups was analyzed using regression models, ANOVA and post-hoc LSD at p = 0.05 significance level. The Statistical Package for the Social Sciences (SPSS) Version 21 was used for all data analysis.

Table 1. Wound healing properties as observations in wound changes over time as effected by ointments of three plants used in ethnoveterinary practices. 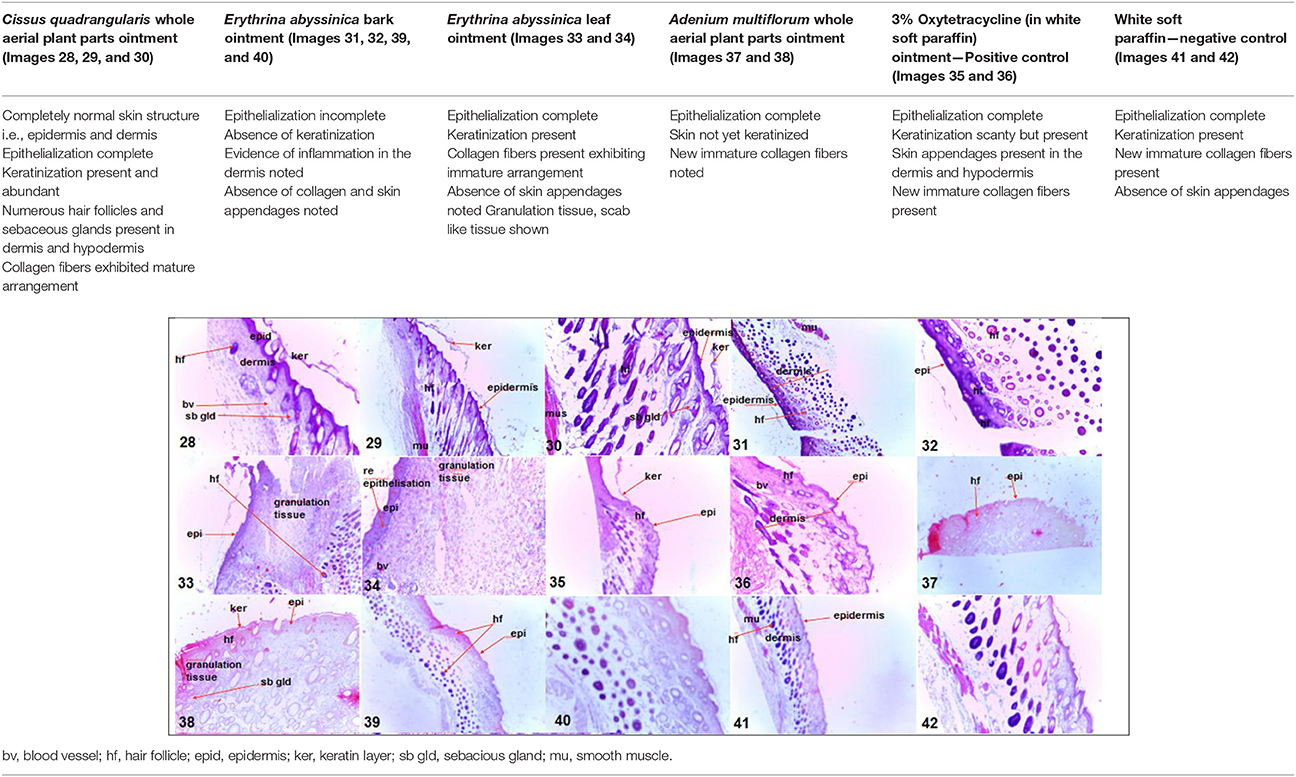 Table 3. Wound healing properties as histological observations on the wound area after 15 days of treatment as effected by ointments of three plants used in ethnoveterinary practices. 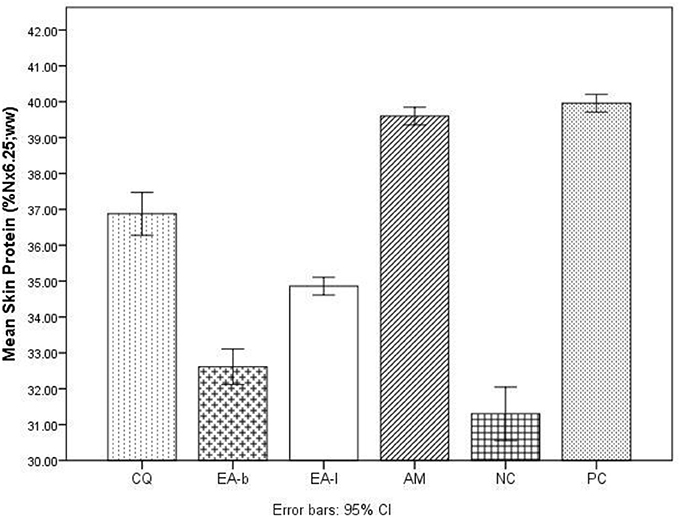 Wounds are common in both humans and animals as a result of physical, chemical or thermal injuries (Barreto et al., 2014). The tissue damages if not managed often lead to chronic inflammation and secondary infections, further damaging surrounding tissues. With production animals untreated wounds may lead to significant losses due to reduced productivity as well as death.

Extracts of plants such as C. quadrangularis, A. multiflorum, and E. abyssinica have been used to manage different types of wounds. Their uses over time have thus proven efficacy and safety. In the management of wounds there are general properties which herbal remedies should possess like controlling/managing secondary infections and inflammation and promoting tissue regeneration among other healing properties. Damages associated with injury may involve the epidermis, local vasculature, dermis and possibly other underlying tissues and this usually kick starts various wound healing processes (Daunton et al., 2012). The ideal wound healing process usually follows the sequence: restoration of barrier functions of the skin e.g., with crust derived from platelets, fibrin and other blood components; handling of any invading microorganisms and other foreign debris; restoration of vasculature and tissues and remodeling of a tissue structure similar to the one damaged (Daunton et al., 2012). Often scaring occurs especially with serious and/or deep wounds where the tissue structure replacing the damaged is different in all aspects including functions. The sequences described fits in the four phases of wound healing i.e., hemostasis (immediate), inflammation (1st–4th day), proliferation or re-epithelialization/contraction (4th–21st day) and remodeling (21st day to 2 years) (Li et al., 2007; Orsted et al., 2011; Daunton et al., 2012; Soni and Singhai, 2012). Some authors however have compressed the phases of wound healing in three phases inflammatory (including clotting), proliferative and remodeling (Wild et al., 2010; Mendonca, 2012).

The presence of all phytoconstituents known to be biologically active in the extract of C. quadrangularis could help explain its efficacy. Marume et al. (2017) reported presence of higher levels of flavonoids and total phenolic compounds; better radical scavenging, antioxidant properties and protein precipitating properties and high levels of some trace elements known to promote wound healing in C. quadrangularis extracts relative to the other plants studied. In the same study Adenium multiflorum extract's profile followed that of C. quadrangularis and E. abyssinica exhibited the weakest which may also explain the weakest wound healing properties it exhibited in this present study.

Figures 3–5 are infrared spectra of the clean crude extracts of A. multiflorum, C. quadrangularis and E. abyssinica leaves done using PerkinElmer Spectrum Version 10.5.2. These are some of the unique ways of fingerprinting and identification of plants and/or their extracts for quality control and assurance as well as allowing duplication. 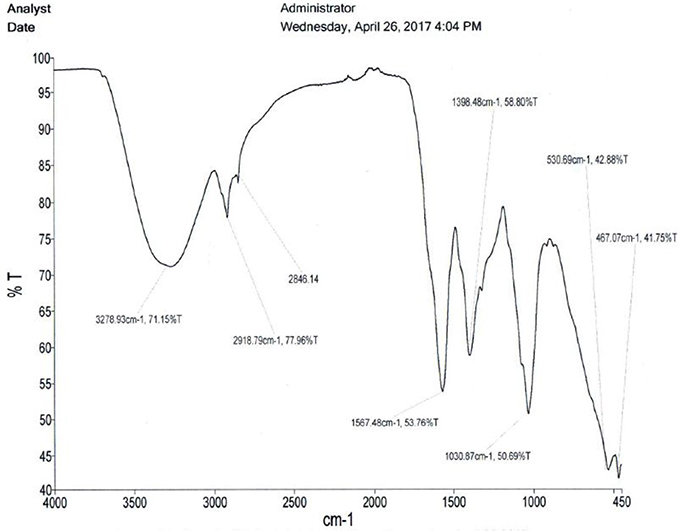 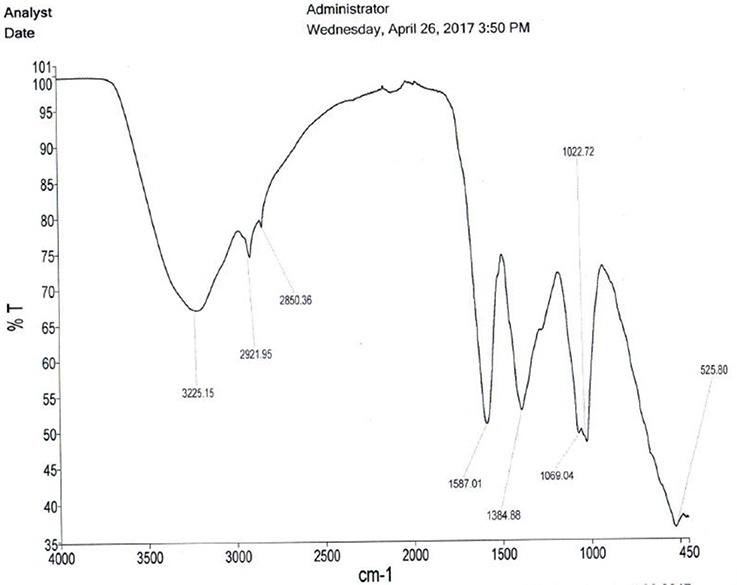 All authors listed have made a substantial, direct and intellectual contribution to the work, and approved it for publication. AM conceptualized the ideas and planned the research. TM, SKh, AN, and GM supervised the work. SK, IM, and TM-T assisted with data collection and execution of research.

Dharani, N., Yenesew, A., Aynekulu, E., Tuei, B., and Jamnadass, R. (2015). “Traditional ethnoveterinary medicine in East Africa” in A Manual on the Use of Medicinal Plants, ed I. K. Dawson (Narobi: The World Agroforestry Centre), 194.

Zorloni, A. (2007). Evaluation of Plants Used for the Control of Animal Ectoparasitoses in Southern Ethiopia (Oromiya and Somali Regions). University of Pretoria.

Copyright © 2017 Marume, Matope, Katsande, Khoza, Mutingwende, Mduluza, Munodawafa-Taderera and Ndhlala. This is an open-access article distributed under the terms of the Creative Commons Attribution License (CC BY). The use, distribution or reproduction in other forums is permitted, provided the original author(s) or licensor are credited and that the original publication in this journal is cited, in accordance with accepted academic practice. No use, distribution or reproduction is permitted which does not comply with these terms.