The natural flavone acacetin inhibits several voltage-gated potassium currents in atrial myocytes, and has anti-atrial fibrillation (AF) effect in experimental AF models. The present study investigates whether acacetin inhibits the Ca2+-activated potassium (KCa) currents, including small conductance (SKCa1, SKCa2, and SKCa3), intermediate conductance (IKCa), and large-conductance (BKCa) channels stably expressed in HEK 293 cells. The effects of acacetin on these KCa channels were determined with a whole-cell patch voltage-clamp technique. The results showed that acacetin inhibited the three subtype SKCa channel currents in concentration-dependent manner with IC50 of 12.4 μM for SKCa1, 10.8 μM for SKCa2, and 11.6 μM for SKCa3. Site-directed mutagenesis of SKCa3 channels generated the mutants H490N, S512T, H521N, and A537V. Acacetin inhibited the mutants with IC50 of 118.5 μM for H490N, 275.2 μM for S512T, 15.3 μM for H521N, and 10.6 μM for A537V, suggesting that acacetin interacts with the P-loop helix of SKCa3 channel. However, acacetin at 3–10 μM did not decrease, but induced a slight increase of BKCa (+70 mV) by 8% at 30 μM. These results demonstrate the novel information that acacetin remarkably inhibits SKCa channels, but not IKCa or BKCa channels, which suggests that blockade of SKCa by acacetin likely contributes to its anti-AF property previously observed in experimental AF.

The primers of SKCa3 mutants were synthesized by the Genome Research Center, the University of Hong Kong (Hong Kong), and the mutants were generated using a QuikChange kit (Stratagene, La Jolla, CA, United States). After confirmed by DNA sequencing, the mutants were transiently expressed in HEK 293 cells in a 35 mm culture dish using Lipofectamine 2000TM (10 μl) with SKCa3 mutant cDNA plasmid (4 μg).

The HEK 293 cells on a coverslip were placed into a cell chamber mounted on the stage of an inverted microscope (Olympus, IX70, Japan), and superfused with Tyrode’s solution (2 ml/min). Whole-cell current was recorded with a patch clamp amplifier (EPC-10, HEKA Elektronik, Lambrecht, Germany) as described previously (Wu et al., 2011, 2012, 2013c; Sun et al., 2014). Briefly, glass electrodes (1.2 mm OD) were pulled with a Brown–Flaming puller (Model P-97, Sutter Instrument Co., Novato, CA, United States). Resistance of the glass pipettes was 2–3 MΩ when filled with the pipette solution. Whole-cell configuration was established by a gentle suction after a gigaohm-seal was obtained. Electrical signal was stored on the hard disk of a PC computer. All experiments were performed at room temperature (22–23°C).

The data were expressed as means ± SEM. Unpaired Student’s t-tests were used as appropriate to evaluate the differences between two group means, and ANOVA was used for multiple groups. A value of P < 0.05 was considered to indicate statistical significance.

Effect of Acacetin on SKCa1 Current

The effect of acacetin on SKCa1 current was determined in HEK 293 cells stably expressing human KCNN1. Figure 1A displays the voltage-dependent SKCa1 current recorded with 200-ms voltage steps between -70 and +80 mV from a holding potential of -80 mV in a representative cell. The current was inhibited by 10 μM acacetin (10 min exposure), and the inhibition was partially reversed by washout. Figure 1B displays the current–voltage (I–V) relationships of SKCa1 determined in another typical experiment with a voltage ramp in the absence and presence of acacetin. The I–V relationships of SKCa1 current showed a reversal potential around -70 mV and an inward rectification property, typical SKCa current as described previously (Girault et al., 2011; Wu et al., 2013b). The current was significantly descreased by 10 μM acacetin in bath solution, and the inhibition was partially reversed on washout. Figure 1C illustrates the concentration-dependent inhibition of SKCa1 current (at +80 mV) by acacetin. The concentration–response curve was fitted to a Hill equation to obtain IC50 (the concentration of inhibiting 50% current) value. The IC50 of acacetin for inhibiting SKCa1 at +80 mV was 12.4 μM (Hill co-efficient, 0.8). 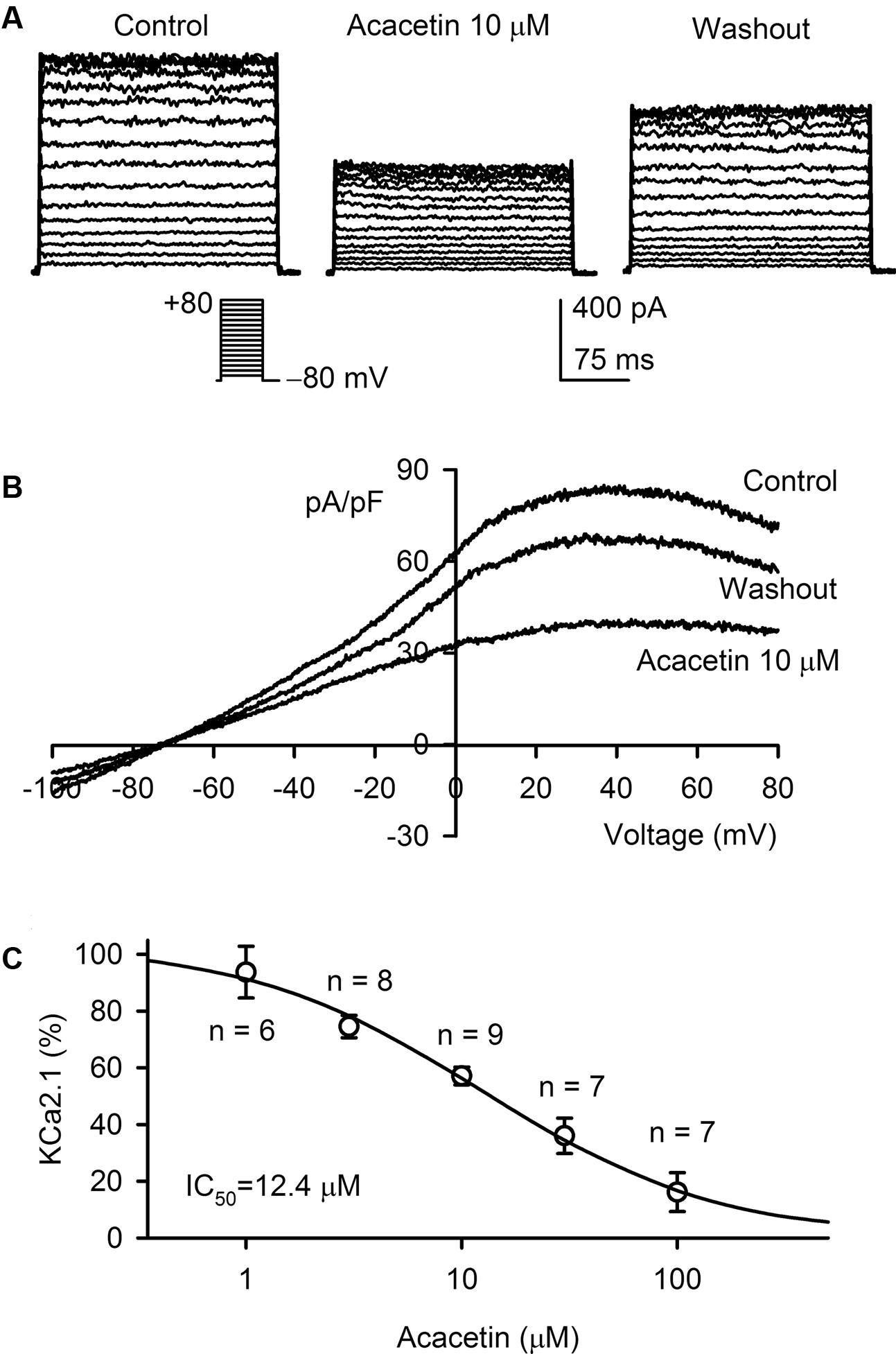 Effect of Acacetin on SKCa2 Current

The effect of acacetin on SKCa2 current was determined in HEK 293 cell line expressing rat KCNN2. Figure 2A shows the voltage-dependent SKCa2 current in a typical experiment with the voltage protocol as shown in the inset. The current was significantly decreased by 10 μM acacetin (10 min exposure) at all testing potentials, and the inhibition was partially reversed by washout. I–V relationships of SKCa2 current determined by a ramp voltage protocol also showed an inward rectification. Inward and outward components of the current were decreased by 10 μM acacetin, and the inhibition was partially recovered on drug washout (Figure 2B). Figure 2C illustrates the concentration–response relationship of acacetin for inhibiting SKCa2 current (at +80 mV). The curve was fitted to a Hill equation. The IC50 of acacetin for inhibiting SKCa2 current was 10.8 μM (Hill coefficient, 0.8). 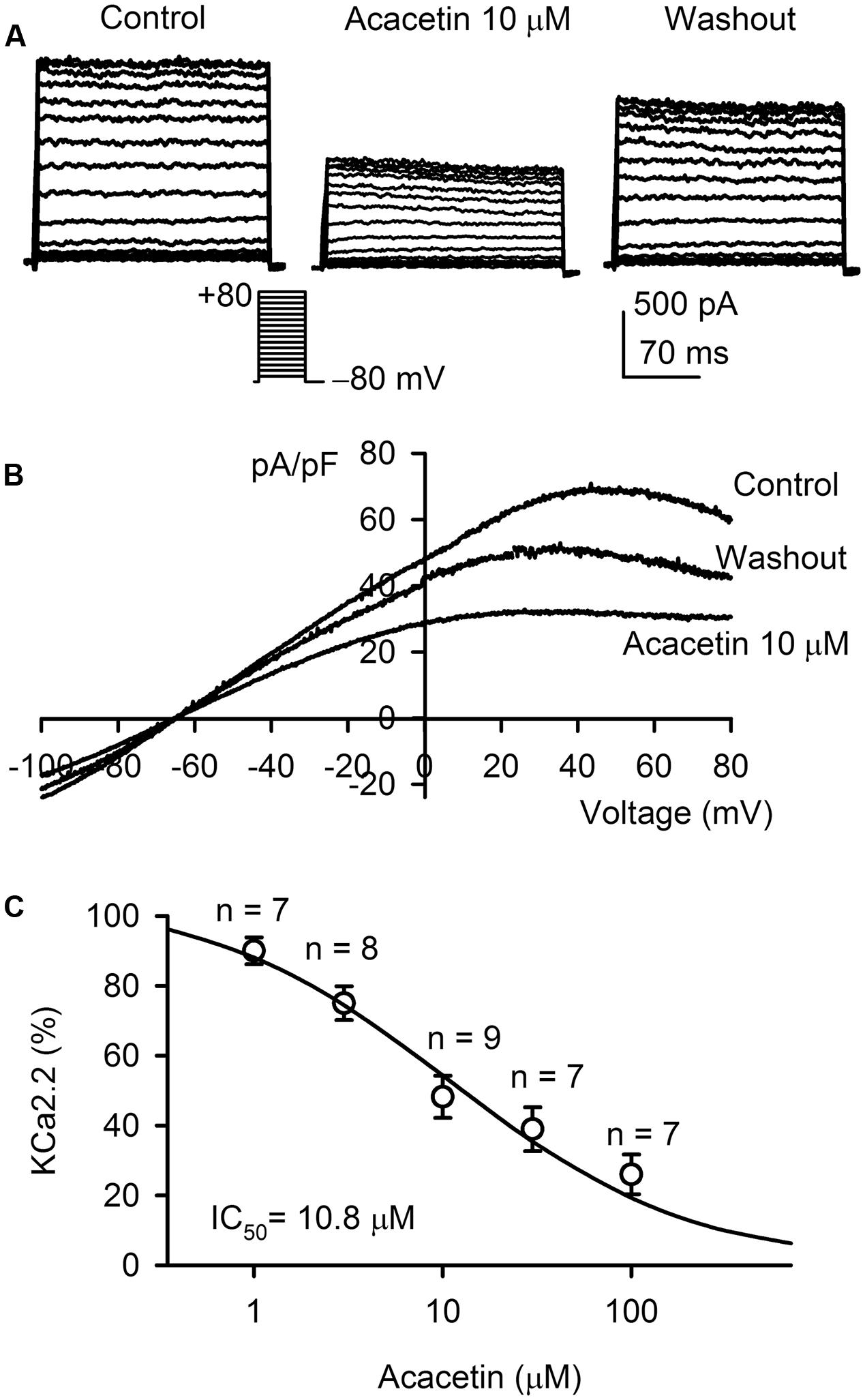 Inhibition of SKCa3 Current by Acacetin

The inhibitory effect of acacetin on SKCa3 was determined in HEK 293 cell line expressing human KCNN3 gene. The voltage-dependent step SKCa3 current was determined with the voltage protocol as shown in the inset in a typical experiment (Figure 3A). SKCa3 current at all test potentials was inhibited by 10 μM acacetin with 10 min incubation, and the inhibition partially recovered on washout for 10 min. I–V relationships of SKCa3 current was determined with a ramp voltage protocol in another cell (Figure 3B) before and after application of acacetin. The current also displays an inward rectification and was reversibly decreased by 10 μM acacetin. The concentration–response curve of acacetin for inhibiting SKCa 3 current was fitted to a Hill equation (Figure 3C). The IC50 of acacetin for inhibiting SKCa3 was 11.6 μM (with a Hill coefficient of 0.8). 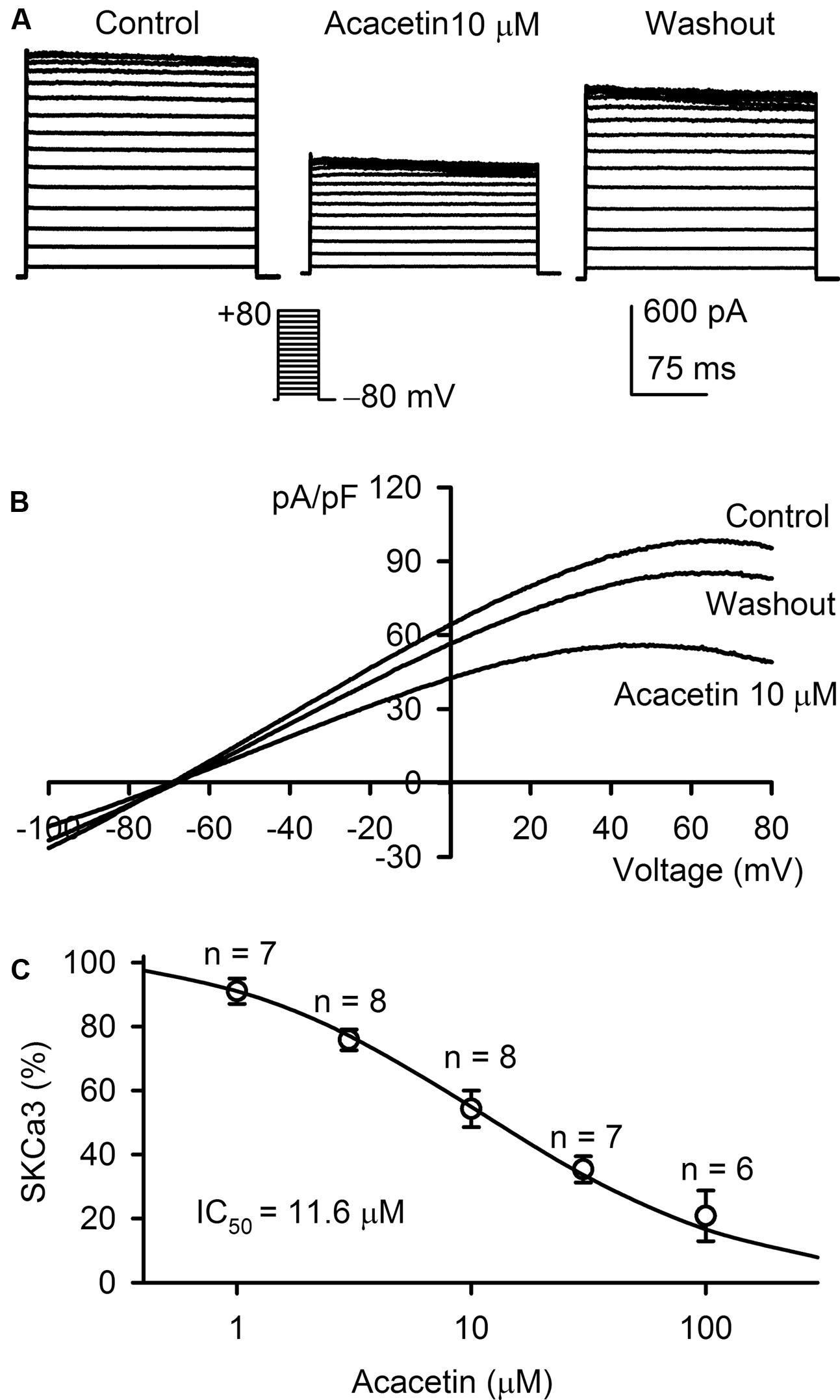 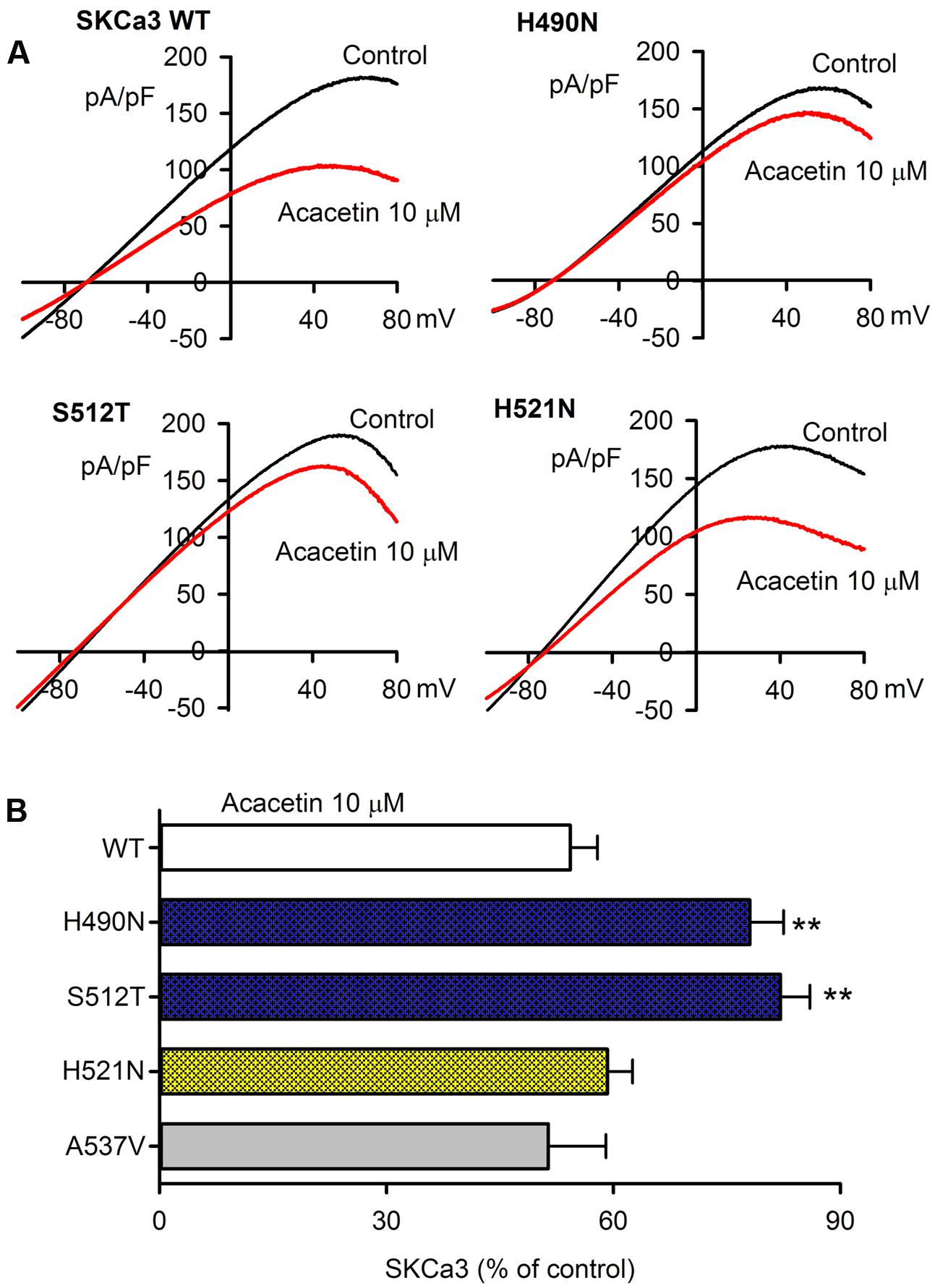 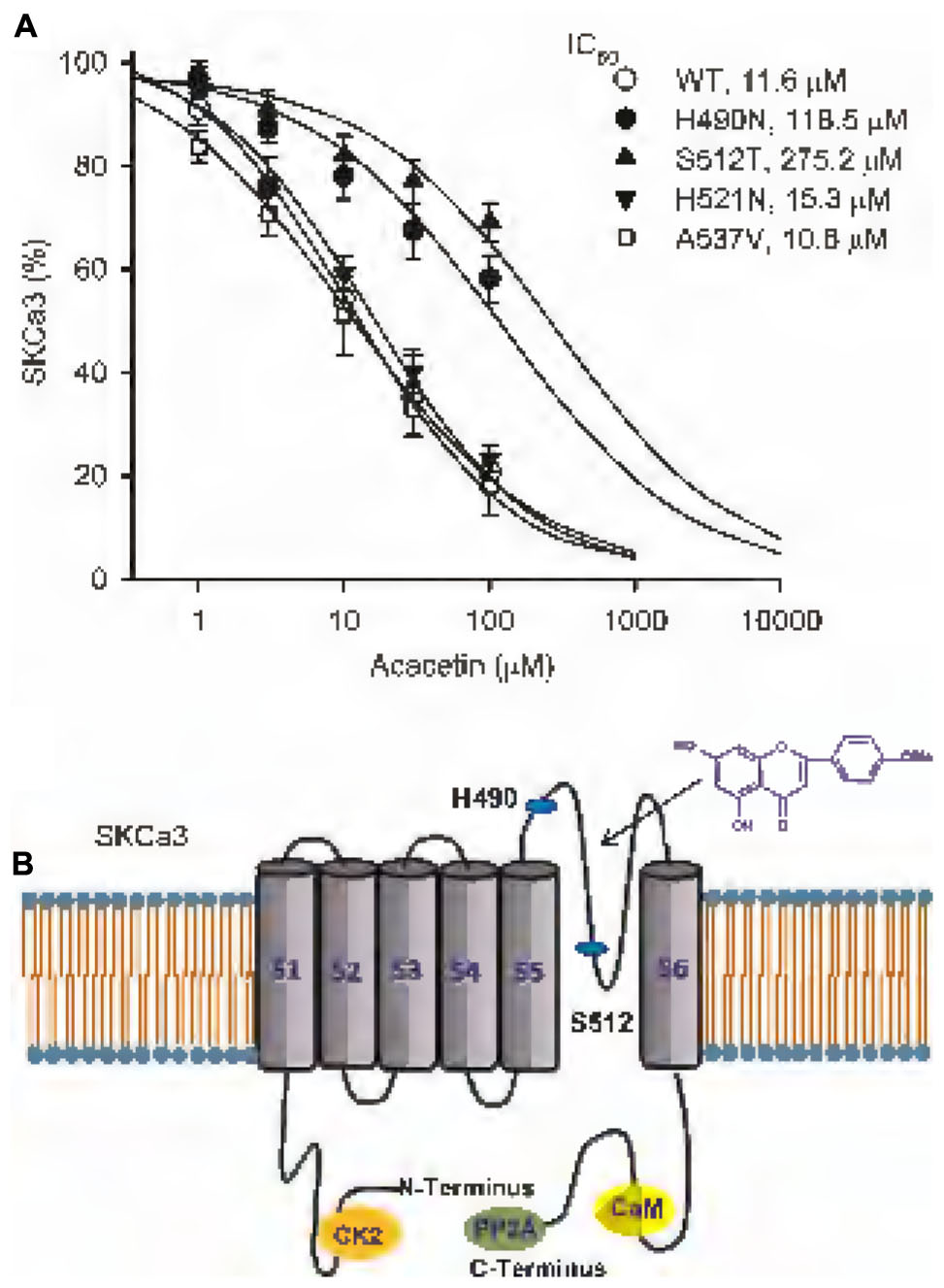 Effect of Acacetin on IKCa Current

The potential effect of acacetin on IKCa was determined in HEK 293 cell line expressing human KCNN4. The voltage-dependent IKCa current (Figure 6A) was recorded with the step voltages as shown in the inset in a typical experiment before and after application of acacetin. Acacetin (10 and 30 μM) slightly decreased the current, and the inhibition was partially recovered on washout. Similar results were observed for the I–V relationships of the current recorded with a voltage ramp in another representative cell (Figure 6B). IKCa shows a linear I–V relationship, similar to those previously recorded in HEK 293 cell line expressing IKCa (Girault et al., 2011). Figure 6C shows that acacetin (10 and 30 μM) decreased IKCa (+70 mV) to 95.0 ± 4.5% (n = 7, P > 0.05) and 89.3 ± 5.5% of control (n = 7, P < 0.05 vs. control, 0 μM), respectively. These results suggest that acacetin has a slight inhibition of IKCa current. 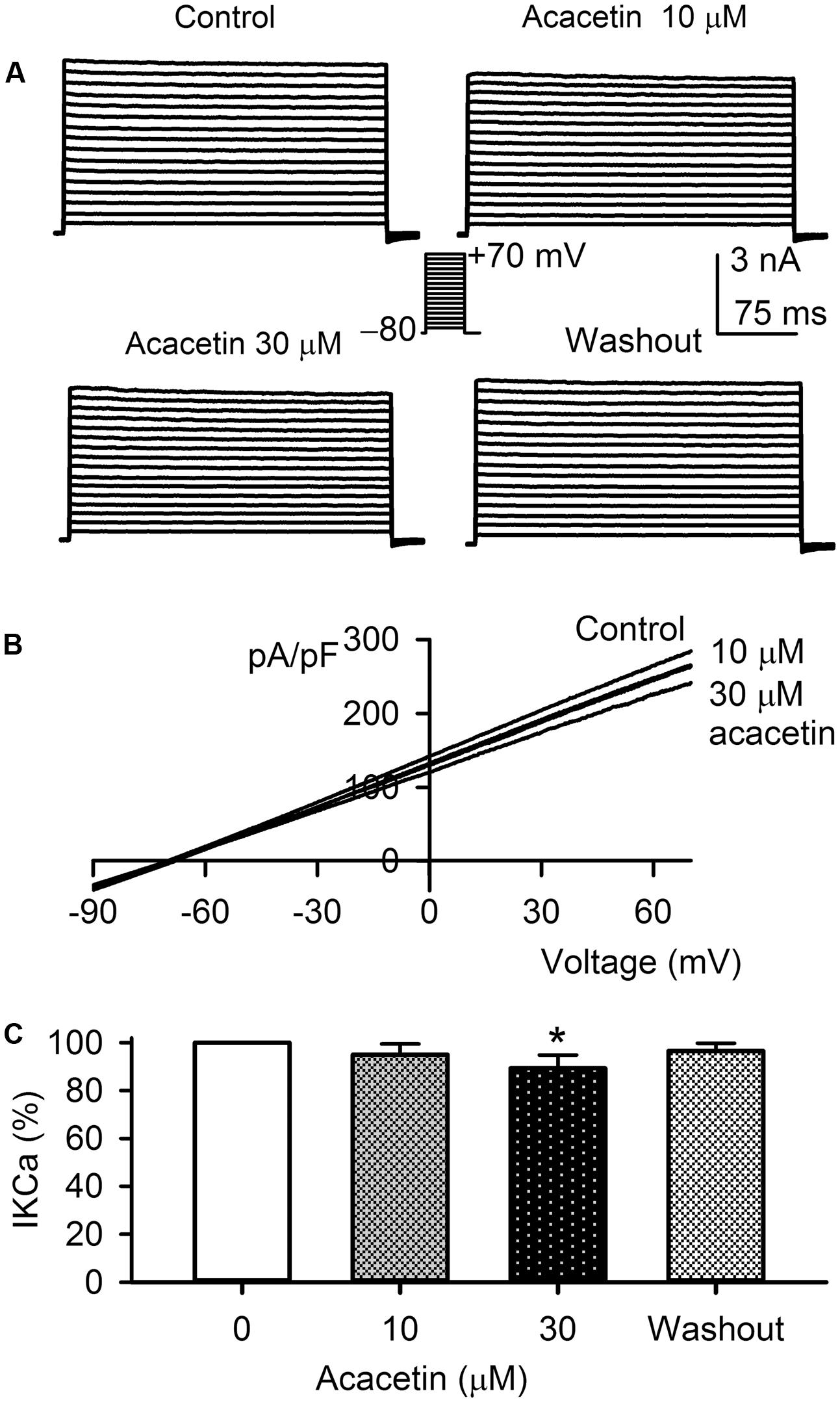 Effect of Acacetin on BKCa Current The present study provides the novel information that the natural flavone acacetin blocks the three SKCa channel subtypes: SKCa1, SKCa2, and SKCa3, stably expressed in HEK 293 cells with similar efficacy. The IC50 values of acacetin for inhibiting SKCa1, SKCa2, and SKCa3 are 12.4, 10.8, and 11.6 μM, respectively. Point mutagenesis of SKCa3 channel reveals that acacetin mainly interacts with H490 and S512 in the P-loop helix of the channel. However, acacetin at a high concentration of 30 μM induces only a small decrease in IKCa channel and a small increase in BKCa channel stably expressed in HEK 293 cells. The very limited effect of acacetin on IKCa channel is similar to that reported previously for other SKCa channel blockers (Girault et al., 2011).

In the heart, activation of SKCa channel may be antiarrhythmic or proarrhythmic, depending on the myocardial pathophysiological conditions (Chang and Chen, 2015). Chua et al. (2011) reported that the SKCa channel current was heterogeneously upregulated in failing rabbit ventricles and SKCa blocker apamin suppressed post-shock shortening of action potential duration in the failing hearts with ventricular fibrillation. On the other hand, apamin induced ventricular arrhythmias in slowly paced failing rabbit ventricles (Chang et al., 2013). The proarrhythmic effect was also observed with apamin in isolated normal canine left atrium (Hsueh et al., 2013).

In this study, we demonstrated that acacetin inhibited SKCa1, SKCa2, and SKCa3 channels in HEK 293 cell line expressing the corresponding genes. The blockade of SKCa channels by acacetin likely also contributes to the anti-AF effect observed in canine models in addition to blocking IKur/Kv1.5, Ito/Kv4.3, and IK.ACh (Li et al., 2008; Wu et al., 2011, 2013a). These studies suggest that acacetin blocks multiple atrial-selective channels, and would be more effective in anti-AF than the blocker that specifically inhibits one type of atrial channel. However, whether acacetin, as apamin and other SKCa blockers, is effective in improving learning and memory (Adelman et al., 2012) remains to be studied in the future. Moreover, additional studies are required for clarifying whether the SKCa blocking effect of acacetin is related to its anti-cancer effect (Salimi et al., 2016; Zeng et al., 2017).

In our previous reports, we demonstrated that acacetin blocked Kv1.5 channel by binding to both its resting and open states by interacting with V505, I508, and V512 within the S6 domain (Wu et al., 2011), and inhibited the closed channel and blocked the open state of Kv4.3 by binding to both P-loop selectivity filter and S6 domain (Wu et al., 2013a). In the present study, we found that H490 and S512, but not H521, of P-loop helix are the binding sites of acacetin for blocking SKCa3 channel. The pore blocking of SKCa3 by acacetin is applicable to SKCa1 and SKCa2, because SKCa1, SKCa2, and SKCa3 share the same sequence in the range of pore helix1. This differs from the molecular determinants of acacetin for blocking Kv1.5 or Kv4.3 channel. On the other hand, the acacetin blockade of SKCa3 channel is different from the organic SKCa blocker NS8593 and the archetypical peptide SKCa blocker apamin. NS8593 interacts with S507 of P-loop helix and A532 of S6 domain (Jenkins et al., 2011), while apamin binds to a residue of S3–S4 extracellular loop of outside pore of the channel to produce a high-sensitivity block without selectivity filter contact (Weatherall et al., 2011). While the binding sites of various SKCa blockers differ, it is important to develop these potential blockers into feasible drug candidates for future clinical application. A water soluble prodrug of acacetin has been developed, which can be intravenously administered for future clinical application (Liu et al., 2016).

Acacetin showed increased BKCa current at concentration of 30 μM. Although the concentration for activating BKCa channel is greater than those of blocking IKur/Kv1.5, IK.ACh, Ito/Kv4.3, and also SKCa channels; this effect may account in part for the vascular dilation reported in a previous study (Calderone et al., 2004).

A limitation of the present study was that all the experiments were conducted only in HEK 293 line expressing SKCa1, SKCa2, or SKCa3 channels and lack of data from native cardiomyocytes. However, this does not affect the conclusion that acacetin blocks SKCa channels. Future effort is required to obtain the data for the effect of acacetin on SKCa current in native cardiomyocytes from an animal species whose heart has no or less expression of IKur/Kv1.5 and Ito/Kv4.3, because acacetin also inhibits these currents in native human atrial myocytes (Li et al., 2008).

Collectively, the present study demonstrates for the first time that acacetin is a SKCa channel blocker and inhibits three subtypes of the SKCa channels stably expressed in HEK 293 cells. The SKCa channel blocking effect may be involved in its anti-AF property previously observed in experimentally induced AF in dogs.

This work was supported in part by a grant (ITS/339/09) from Innovation and Technology Commission of the Hong Kong SAR Government, China, a Seeding Fund from the University of Hong Kong, and a Key Cardiovascular Laboratory Fund (3502Z20150050) from Department of Xiamen Science and Technology, Xiamen, China

Copyright © 2017 Chen, Liu, Sun, Jin, Xiao, Wang and Li. This is an open-access article distributed under the terms of the Creative Commons Attribution License (CC BY). The use, distribution or reproduction in other forums is permitted, provided the original author(s) or licensor are credited and that the original publication in this journal is cited, in accordance with accepted academic practice. No use, distribution or reproduction is permitted which does not comply with these terms.