The herbal medicine rikkunshito has the potential to improve chemotherapy-induced nausea and vomiting (CINV) by stimulating ghrelin secretion. We aimed to evaluate the efficacy and safety of rikkunshito in preventing CINV for patients with lung cancer. Two separate prospective, randomized, phase II parallel design studies were conducted in patients with lung cancer. Fifty-eight and sixty-two patients scheduled to receive highly emetogenic chemotherapy (HEC) and moderately emetogenic chemotherapy (MEC), respectively, were randomized 1:1 to receive either standard antiemetic therapy in accordance with international guidelines (S group) or standard antiemetic therapy plus oral rikkunshito (R group). The primary endpoint was overall complete response (CR)—that is, no emesis and rescue medication in the first 120 h post-chemotherapy. Secondary endpoints included CR in the acute (0–24 h) and delayed (>24–120 h) phases and safety. Fifty-seven patients (S group, 28; R group, 29) receiving HEC and sixty-two patients (S group, 30; R group, 32) receiving MEC with comparable characteristics were evaluated. The CR rates were similar across the S and R groups for the HEC study in the overall (67.9% vs. 62.1%), acute (96.4% vs. 89.6%), and delayed (67.9% vs. 62.1%) phases, respectively, and for the MEC study in the overall (83.3% vs. 84.4%), acute (100% vs. 100%), and delayed (83.3% vs. 84.4%) phases, respectively. No severe adverse events were observed. Although rikkunshito was well tolerated, it did not demonstrate an additional preventative effect against CINV in lung cancer patients receiving HEC or MEC.

Some of the most prevalent and concerning effects of cancer treatment are chemotherapy-induced nausea and vomiting (CINV) (Hofman et al., 2004; Molassiotis et al., 2008). CINV leads to reduced chemotherapy adherence rates, deteriorated of function and quality of life (QOL), and aggravated anxiety and depression (Schwartzberg, 2007; Hesketh, 2008). Therefore, circumvention of CINV is a critical element of supportive care in cancer.

The emetogenicity of anti-cancer agents has been categorized according to their risk levels in the guidelines set by ASCO (Hesketh et al., 2016), MASCC/ESMO (Jordan et al., 2011), NCCN (National Comprehensive Cancer Network [NCCN], 2016), and JSCO (Japan Society of Clinical Oncology [JSCO], 2015). A chemotherapy regimen that is associated with emesis in ≥90% of patients is considered to have high emetic risk (highly emetogenic chemotherapy, HEC), regimens that cause emesis in 30–90% of patients are considered to have a moderate emetic risk (moderately emetogenic chemotherapy, MEC), those causing emesis in 10–30% of patients have a low emetic risk, and those causing emesis in less than 10% of patients have a minimum emetic risk. In all clinical guidelines, cisplatin (CDDP) is classified as HEC and carboplatin (CBDCA) as MEC. With these regimens, the patients are at risk of developing CINV for up to 120 h after receiving chemotherapy; this 120-h watch period for CINV incorporates an acute phase (0–24 h), delayed phase (>24–120 h), and overall phase (0–120 h).

The treatments recommended by the international antiemetic guidelines of ASCO (Hesketh et al., 2016), MASCC/ESMO (Jordan et al., 2011), NCCN (National Comprehensive Cancer Network [NCCN], 2016), and JSCO (Japan Society of Clinical Oncology [JSCO], 2015) for the prevention of CINV that is associated with HEC are a neurokinin 1 receptor antagonist (NK-1-RA), a serotonin receptor antagonist (5HT3-RA), and dexamethasone (DEX); those for MEC include 5HT3-RA, DEX, and (optionally) NK-1-RA.

Herbal medicines, which were systemically popularized in Japan in the 16th century, have a wide range of indications aimed at maintaining QOL in patients rather than curing them (Mizukami et al., 2009). Herbal medicines are thus intended to boost the body’s own healing power (i.e., immune system) and help restore its natural balance. Rikkunshito, an herbal medicine, has been shown to improve upper gastrointestinal symptoms and anorexia (Tomono et al., 2006; Ohno et al., 2011; Arai et al., 2012; Tominaga et al., 2012); therefore, we hypothesized that this herbal medicine can reduce CINV. Rikkunshito was approved in Japan only as a fixed dose of 7.5 g (2.5 g three times a day).

To the best of our knowledge, there are no prospective studies on the efficacy of herbal medicines in preventing CINV. Herein, we describe the results of two separate prospective, randomized, phase II parallel design studies that evaluated the efficacy and safety of rikkunshito in the prevention of CINV in patients with lung cancer receiving CDDP-based HEC (HOT1402) and CBDCA-based MEC (HOT1403).

This study comprised two separate prospective, randomized phase II Hokkaido Lung Cancer Study Group Trial (HOT) investigations that were conducted in accordance with the principles of the Declaration of Helsinki, Good Clinical Practice guidelines (World Medical Association, 1997), and CONSORT guidelines. The protocol was approved by the institutional review boards of all participating institutions, and all patients provided written informed consent before treatment. This study was registered at the University Hospital Medical Information Network (UMIN) Clinical Trials Registry as UMIN000014239 (HOT1402) and UMIN000014240 (HOT1403).

The efficacy and safety of the antiemetic therapy were evaluated during the 7 days following the administration of the HEC or MEC in the first cycle. The patients recorded episodes of emesis, nausea ratings, and rescue medications taken during the first 120 h, as well as any impairment of eating habits during the first 7 days post-chemotherapy, in a diary. Patients assessed their nausea with a 100-mm horizontal visual analog scale (VAS); scores of ≤5 and ≤25 mm on the VAS scale indicated no nausea or no significant nausea, respectively. The patients also recorded the ratio of dietary intake with a 100-mm horizontal VAS. Adverse events related to the antiemetic treatment were surveyed by the investigators according to the National Cancer Institute Common Terminology Criteria for Adverse Events, version 4.0. 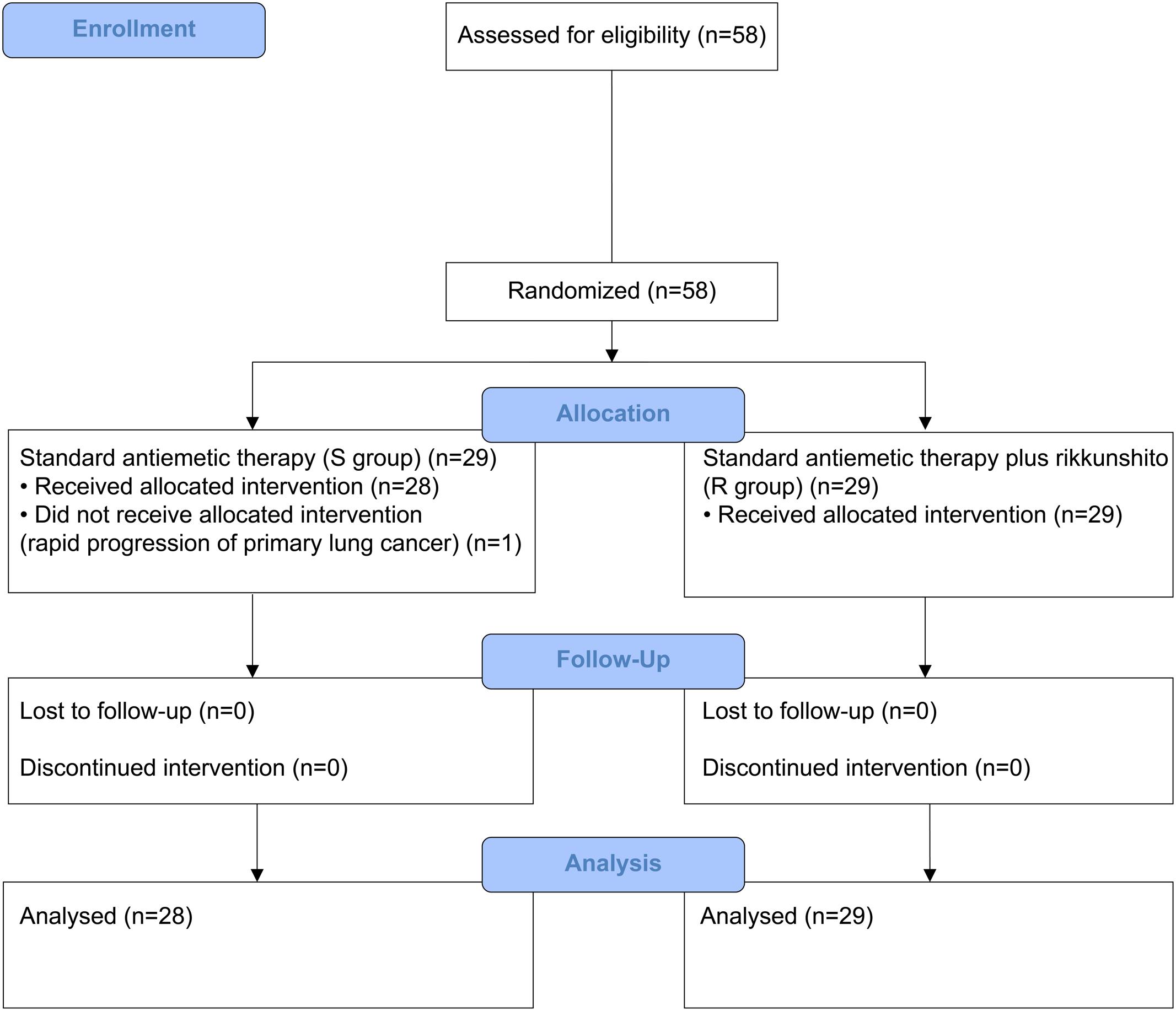 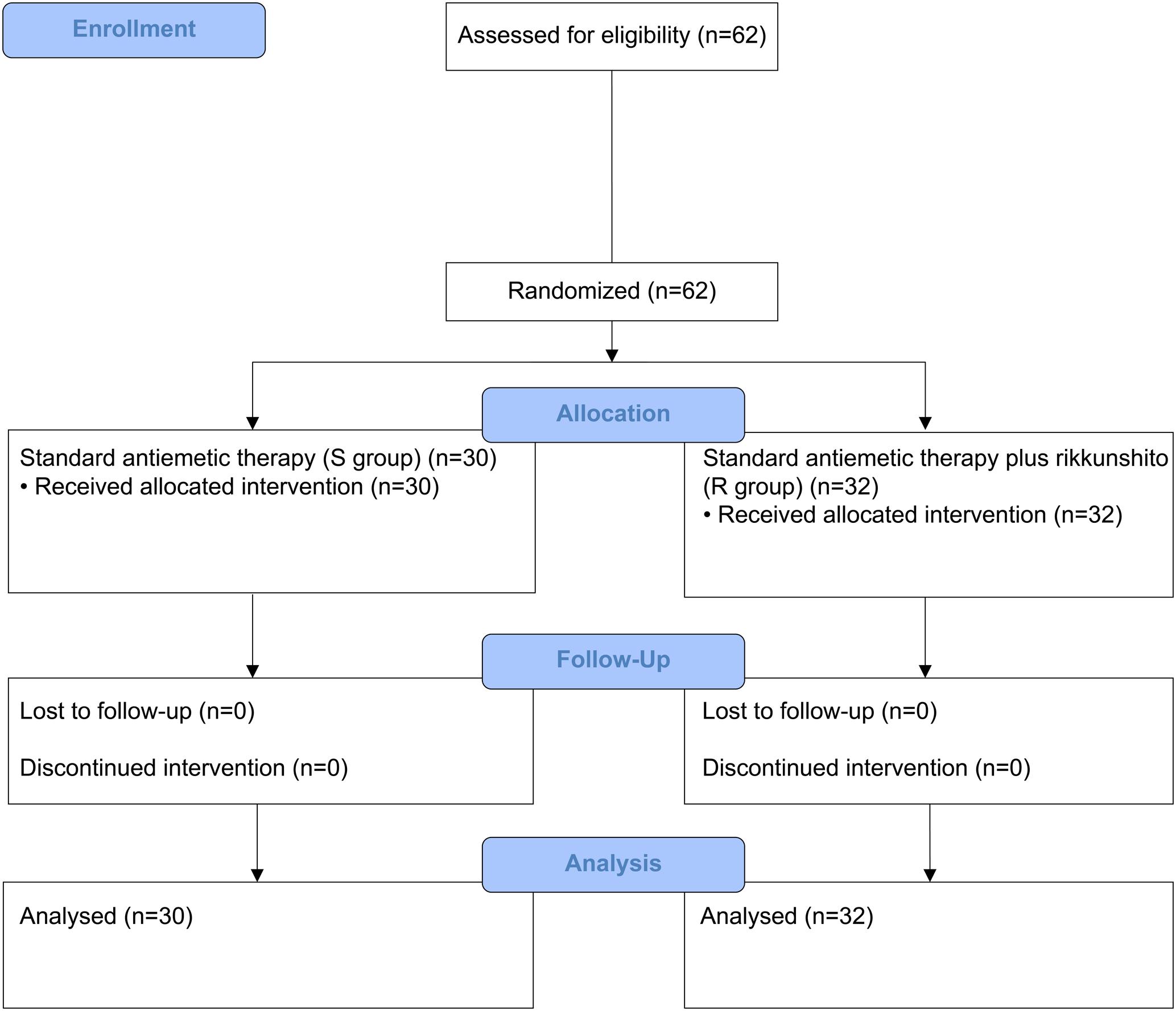 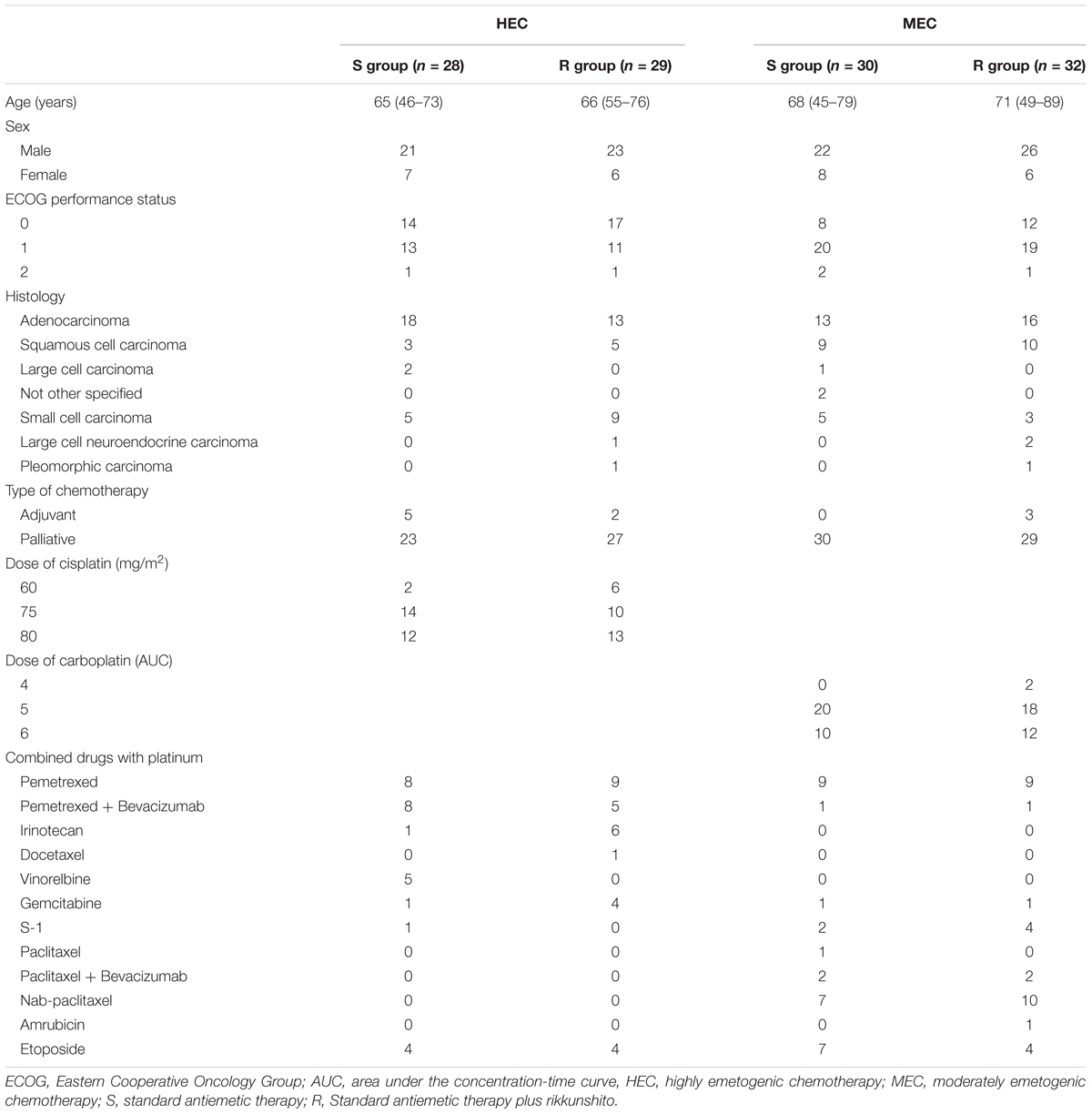 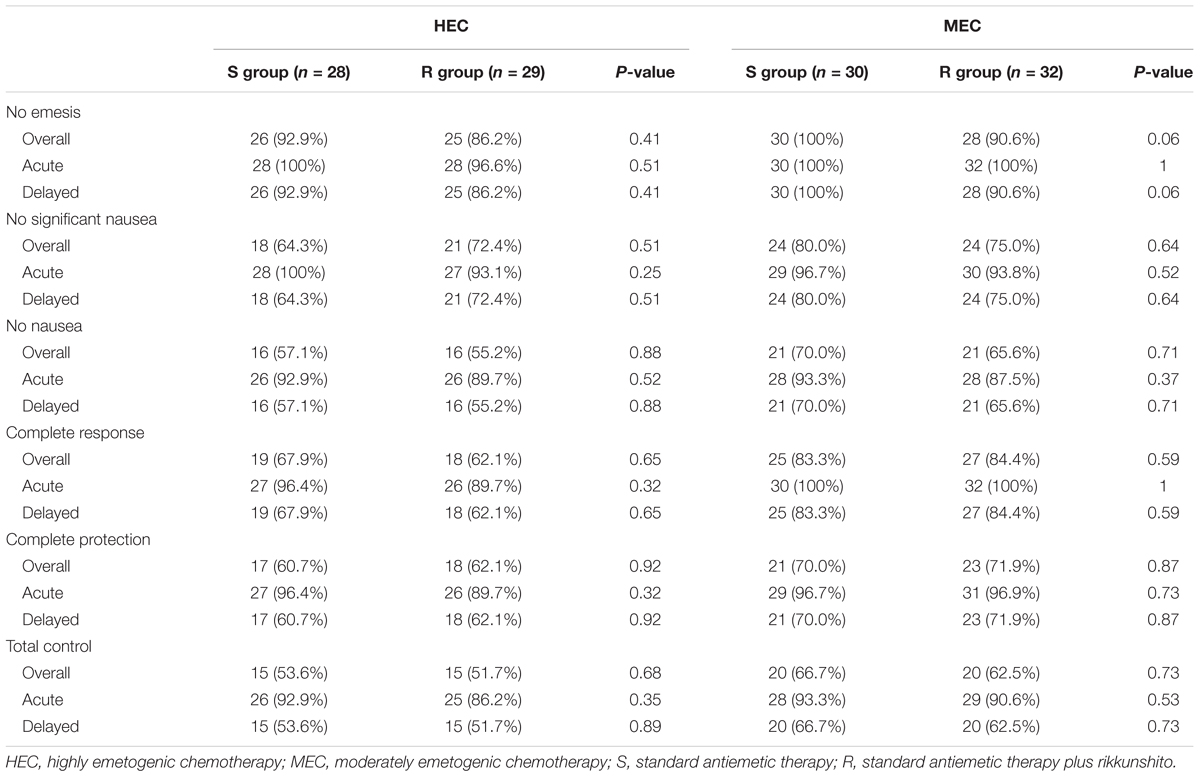 To the best of our knowledge, this study was the first prospective trial designed to evaluate the efficacy and safety of herbal medicine for the prevention of CINV in patients with lung cancer receiving HEC and MEC. Herbal medicines are inexpensive dietary supplements that can boost the body’s immune system and have the potential to improve anorexia and CINV in cancer patients. The orexigenic hormone ghrelin is a 28-amino acid peptide and has an n-octanoyl modification on Ser3; it was first isolated from rat stomachs and was found to be an endogenous ligand for the receptor of the growth hormone secretagogue. Additionally, ghrelin also has an intense appetite-enhancing effect (Kojima et al., 1999). A decrease in the concentration of circulating ghrelin along with appetite loss has been observed in CDDP-treated rats (Takeda et al., 2008). Administration of exogenous ghrelin peripherally improves anorexia (Liu et al., 2006; Takeda et al., 2008) and vomiting (Rudd et al., 2006) induced by CDDP.

Rikkunshito is an herbal medicine prepared by combining eight herbal medicines: Atractylodis lanceae rhizoma, Ginseng radix, Pinelliae tuber, Hoelen, Zizyphi fructus, Aurantii nobilis pericarpium, Glycyrrhizae radix, and Zingiberis rhizoma (Suzuki et al., 2009; Mochiki et al., 2010). Rikkunshito stimulates ghrelin secretion from the stomach and the response to it in the hypothalamus (Takeda et al., 2008; Fujitsuka et al., 2009). It is widely used in Japan for the treatment of upper gastrointestinal symptoms in patients with functional dyspepsia (Arai et al., 2012), gastroesophageal reflux disease (Tominaga et al., 2012), and chemotherapy-induced nausea for cancer patients (Tomono et al., 2006; Ohno et al., 2011). Based on these findings, we posited that rikkunshito can improve CINV and conducted this prospective study to evaluate its efficacy for the prevention of CINV in patients with lung cancer who were receiving HEC and MEC.

In the HEC study, the CR rates in the overall phase were 67.9% in the S group and 62.1% in the R group, which did not meet the primary endpoint goals. These results were inferior to previous phase III study results that revealed overall CR rates of 59–77% (Hesketh et al., 2003; Poli-Bigelli et al., 2003; Longo et al., 2011; Suzuki et al., 2016). On the other hand, the overall phase CR rates in our MEC study were 83.3% in the S group and 84.4% in R the group, which met the primary endpoint goals. These results were superior compared to previous phase III trial results that yielded overall CR rates of 54–74% (Herrstedt et al., 2009; Aapro et al., 2010; Rapoport et al., 2010). Despite having the CINV symptoms, patients enrolled in these two studies were diligent with fulfilling the requirements for daily-recommended nutrients. Therefore, the patients had well to excellent food intake throughout the course of these two studies.

In the present study, rikkunshito was safe and manageable; however, it did not demonstrate any additional benefits beyond those of standard antiemetic regimens used for the prevention of CINV in patients receiving HEC and MEC for lung cancer. Moreover, rikkunshito did not show additional benefits when performing subset analyses of various clinical factors. One possibility that remains to be investigated is that rikkunshito did not sufficiently increase the plasma levels of acylated ghrelin (the active form of ghrelin) in the patients included in this study. For ethical reasons, we did not examine the level of ghrelin in each patient.

The frequency of CINV in patients receiving HEC remained high, which is a challenge that remains to be solved. Olanzapine, which inhibits multiple neurotransmitters, has been reported to produce favorable results and could be an attractive treatment option for CINV prevention (Navari et al., 2011; Hashimoto et al., 2016). In the present study, olanzapine was not used as part of the standard antiemetic regimen, but it was used as a rescue medication in one patient who was receiving HEC.

Rikkunshito was well tolerated; however, it did not show any additional benefits beyond those of standard antiemetic regimens for the prevention of CINV in patients with lung cancer who were receiving HEC and MEC. Further investigation is required to improve CINV control, especially in patients receiving HEC.

Conceptualization and design by TH. Data collection by all authors. Data analysis and interpretation done by TH and TA. Manuscript written by TH. Critical review and revisions of manuscript done by all the authors. Finally, all authors have agreed with the content and approve of the manuscript for submission.

Copyright © 2018 Harada, Amano, Ikari, Takamura, Ogi, Fujikane, Fujita, Taima, Tanaka, Sasaki, Okumura, Sugawara, Yokouchi, Yamada, Morikawa, Dosaka-Akita, Isobe and Nishimura. This is an open-access article distributed under the terms of the Creative Commons Attribution License (CC BY). The use, distribution or reproduction in other forums is permitted, provided the original author(s) or licensor are credited and that the original publication in this journal is cited, in accordance with accepted academic practice. No use, distribution or reproduction is permitted which does not comply with these terms.