Inwardly rectifying potassium (Kir) channel subunits Kir4.1 are specifically expressed in astrocytes and regulate neuronal excitability by mediating spatial potassium buffering. In addition, it is now known that astrocytic Kir4.1 channels are closely involved in the pathogenesis of epilepsy. Here, to explore the role of Kir4.1 channels in the treatment of epilepsy, we evaluated the effects of the antiepileptic drugs, valproate, phenytoin, phenobarbital and ethosuximide, on Kir4.1 expression in astrocytes using immunohistochemical techniques. Repeated treatment of rats with valproate (30–300 mg/kg, i.p., for 1–10 days) significantly elevated the Kir4.1 expression levels in the cerebral cortex, amygdala and hippocampus. Up-regulation of Kir4.1 expression by valproate occurred in a dose- and treatment period-related manner, and did not accompany an increase in the number of astrocytes probed by glial fibrillary acidic protein (GFAP). In addition, repeated treatment with phenytoin (30 mg/kg, i.p., for 10 days) or phenobarbital (30 mg/kg, i.p., for 10 days) also elevated Kir4.1 expression region-specifically in the amygdala. However, ethosuximide (100 mg/kg, i.p., for 10 days), which can alleviate absence but not convulsive seizures, showed no effects on the astrocytic Kir4.1 expression. The present results demonstrated for the first time that the antiepileptic drugs effective for convulsive seizures (valproate, phenytoin, and phenobarbital) commonly elevate the astrocytic Kir4.1 channel expression in the limbic regions, which may be related to their antiepileptic actions.

Besides the acute neural inhibition, repeated treatments with antiepileptics are known to exert, to some extent, prophylactic effects in chronic epilepsy, although the underlying mechanisms remain unclear (Iudice and Murri, 2000; Michelucci, 2006; Torbic et al., 2013). This makes a hypothesis that antiepileptics may enhance Kir4.1 expression to prevent epileptogenesis. In the present study, therefore, we evaluated the effects of the antiepileptic drugs, valproate, phenytoin, phenobarbital and ethosuximide, on astrocytic Kir4.1 expression to explore the potential role of Kir4.1 expression in the treatment of epilepsy.

Male 6-week-old SD rats (Japan SLC, Shizuoka, Japan) were used. The animals were kept in air-conditioned rooms (24 ± 2°C and 50 ± 10% relative humidity) under a 12-h light/dark cycle (light on: 8:00 a.m.) and allowed ad libitum access to food and water. The animal care methods complied with the Guide for the Care and Use of Laboratory Animals of the Ministry of Education, Science, Sports and Culture of Japan. The experimental protocols of this study were approved by the Animal Research Committee of Osaka University of Pharmaceutical Sciences.

Animals (6 rats/group) were intraperitoneally injected with a daily dose of an antiepileptic drug as followed; valproate (30, 100, and 300 mg/kg), phenytoin (30 mg/kg), phenobarbital (30 mg/kg), or ethosuximide (100 mg/kg) for 10 days. To evaluate the time-course, animals were treated with valproate (300 mg/kg) for 1 or 5 day(s). The test doses of each drug were set to anticonvulsive doses in rodents, according to previous papers (Walton and Treiman, 1989; Lothman et al., 1991; Löscher, 1999; Gören and Onat, 2007). Twenty-four hours after the last drug treatment, the animals were deeply anesthetized with pentobarbital (80 mg/kg, i.p.), transcardially perfused with ice-cold phosphate-buffered saline (PBS) and then with 4% paraformaldehyde solution. The brains were then removed from the skull and placed in fresh fixative for at least 24 h. Sodium valproate, phenytoin, phenobarbital, and ethosuximide were purchased from Sigma-Aldrich. Other common laboratory reagents were also obtained from commercial sources.

All data are expressed as the mean ± S.E.M. Comparisons between two groups were performed by Student's t-test. Statistical significance of differences among multiple groups was determined by one-way ANOVA followed by Tukey's post hoc test. A P-value of less than 0.05 was considered statistically significant. 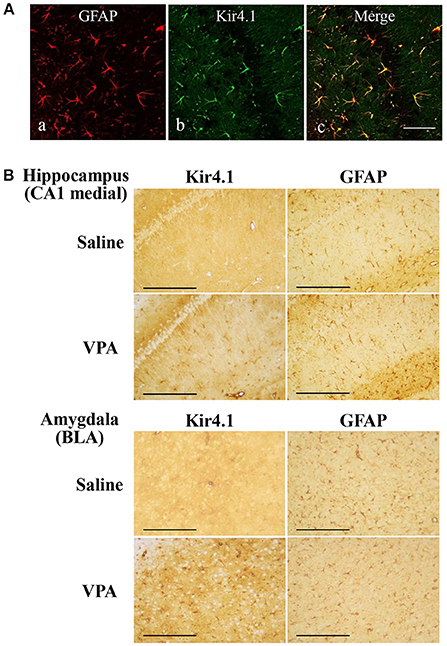 Figure 2. Effects of valproate (VPA) on expression of Kir4.1 and GFAP in the hippocampus. (A): Expressional patterns of Kir4.1 channels in astrocytes. Representative images of immunofluorescence double staining for GFAP and Kir4.1 in a medial part of the hippocampal CA1 region. Scale bar: 50 μm. (B) Representative images of immunohistochemical staining for Kir4.1 (left panels) and GFAP (right panels) in the hippocampal CA1 medial regions (medial CA1) and the basolateral amygdaloid nucleus anterior part (BLA) of saline- or valproate (VPA)-treated rats. Scale bar: 200 μm.

Figure 3. Effects of valproate on topographical expression of Kir4.1 and GFAP in rats. Data show the number of Kir4.1-immunoreactivity (IR) -positive cells (A) or GFAP-IR-positive cells (B) in each brain region of rats treated with valproate (300 mg/kg/day, i.p.) for 10 days. Each point represents the mean ± S.E.M. of six animals. *P < 0.05, **P < 0.01, significantly different from saline-treated rats.

Figure 4. Dose-response effects of valproate on topographical Kir4.1/GFAP expression ratios in rats. Animals were treated with 300 mg/kg/day (A) or 30 and 100 mg/kg/day (B) of intraperitoneal valproate for 10 days. A pair of successive brain sections was stained with anti-Kir4.1 or anti-GFAP antibodies. The Kir4.1 expression ratios were calculated as the number of Kir4.1-IR-positive cells relative to the number of GFAP-IR-positive cells in each region. Each point represents the mean ± S.E.M. of six animals. *P < 0.05, **P < 0.01, significantly different from saline-treated rats.

Figure 5. Time-course effects of valproate on topographical Kir4.1/GFAP expression ratios in rats. Animals were treated with 300 mg/kg/day of intraperitoneal valproate for 1 day (A) or 5 days (B). The Kir4.1 expression ratios were calculated as the number of Kir4.1-IR-positive cells relative to the number of GFAP-IR-positive cells in each region. Each point represents the mean ± S.E.M. of six animals. *P < 0.05, significantly different from saline-treated rats.

Effects of Other Antiepileptic Drugs on Astrocytic Kir4.1 Expression 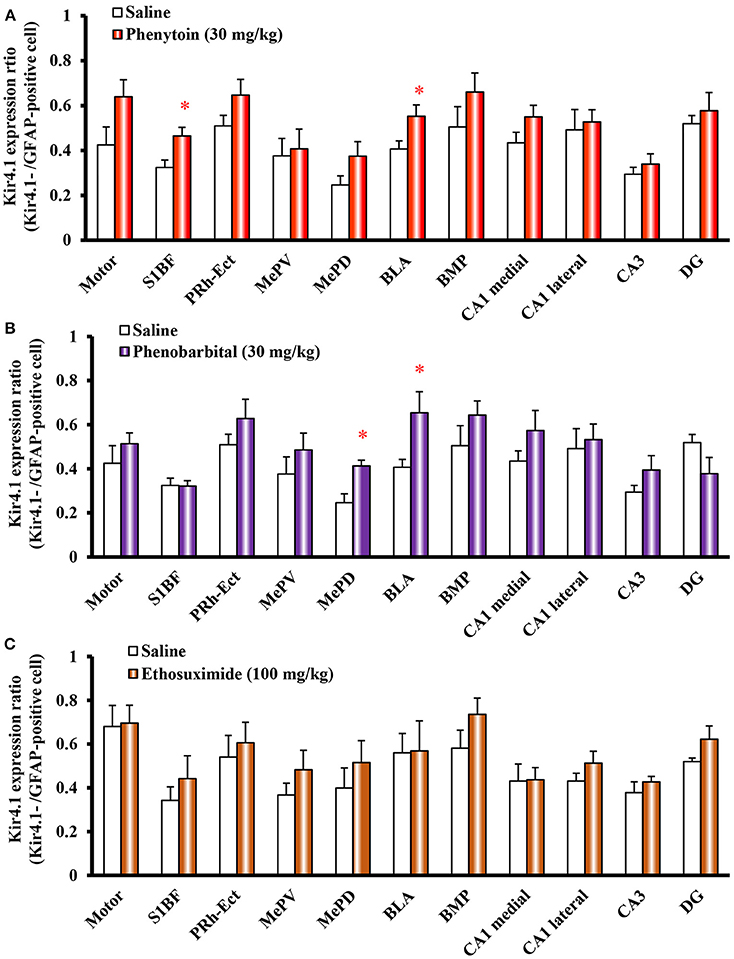 Valproate inhibits GABA transaminase and increases GABA levels, thereby enhancing inhibitory GABAergic activities (Vajda and Eadie, 2014). Phenobarbital also activates the GABAergic system by prolonging the opening time of chloride ion channels within GABAA receptors. In addition, both valproate and phenytoin possess an inhibitory action against voltage-gated Na+ channels. All these actions of antiepileptic drugs reduce neural excitability and contribute to an acute inhibitory action on seizure induction. Besides the acute actions, repeated treatments with these antiepileptics are known to exert, to some extent, prophylactic effects in chronic epilepsy, although such usage are sometimes limited by their side effects and/or drug interactions (e.g., enzyme-inducing properties) (Iudice and Murri, 2000; Michelucci, 2006; Torbic et al., 2013). Indeed, valproate reportedly had the potential to prevent epileptogenesis although the underlying mechanisms remain unclear (Silver et al., 1991; Bolanos et al., 1998; Hashimoto et al., 2003). The present fact that the up-regulation of Kir4.1 channels by antiepileptics was mostly manifested after repeated treatments suggests that the elevated expression of Kir4.1 channels may contribute to the seizure-preventive (prophylactic) actions of these agents.

Ethosuximide specifically alleviates absence seizures and does not affect (or sometimes worsen) GTCSs. It inhibits the low threshold T-type Ca2+ currents in thalamic neurons, although other mechanisms (e.g., inhibition of the non-inactivating Na+ currents and the Ca2+-activated K+ currents) are also proposed (Crunelli and Leresche, 2002). Interestingly, ethosuximide failed to affect Kir4.1 expression in any brain regions examined. Therefore, Kir4.1 channels may not be involved in preventive effects of ethosuximide on absence seizures. This is consistent with our previous findings that down-regulation of Kir4.1 expression was observed only in the GTCSs model (e.g., Noda epileptic rats), but not in the absence seizure model (Groggy rats), implying that pathophysiological alterations of Kir4.1 are not linked to non-convulsive absence seizures (Harada et al., 2013, 2014; Ohno et al., 2015).

In conclusion, we evaluated the effects of the antiepileptic drugs, valproate, phenytoin, phenobarbital and ethosuximide, on expressional levels of astrocytic Kir4.1 channels in rats. Valproate, phenytoin and phenobarbital, which commonly alleviate GTCSs, significantly increased Kir4.1 expression in the limbic regions (e.g., amygdala) without affecting the number of astrocytes. Up-regulation of Kir4.1 channels by valproate occurred in a dose- and treatment period-dependent manner. In contrast, treatment of rats with ethosuximide, which selectively ameliorates absence seizures, did not affect Kir4.1 expression. The present results demonstrated for the first time that antiepileptics (e.g., valproate, phenytoin and phenobarbital) up-regulate astrocytic Kir4.1 channels in the amygdala, which may contribute to their clinical efficacy in chronic epilepsy. However, it remains uncertain how these antiepileptics elevated the expression of Kir4.1 channels region-specifically in the limbic regions. Further studies are required to clarify the mechanisms underlying the control of astrocytic Kir4.1 expression by antiepileptic drugs.

Copyright © 2018 Mukai, Kinboshi, Nagao, Shimizu, Ono, Sakagami, Okuda, Fujimoto, Ito, Ikeda and Ohno. This is an open-access article distributed under the terms of the Creative Commons Attribution License (CC BY). The use, distribution or reproduction in other forums is permitted, provided the original author(s) and the copyright owner(s) are credited and that the original publication in this journal is cited, in accordance with accepted academic practice. No use, distribution or reproduction is permitted which does not comply with these terms.