Department of Infection and Immunity, Luxembourg Institute of Health, Luxembourg

Lobeglitazone (LB) is a novel agonist of peroxisome proliferator-activated receptor (PPAR)-α and γ that was developed as a drug to treat diabetes mellitus. We explored the ameliorative effects of LB on allergic asthma using a murine model of ovalbumin (OVA)-induced asthma. To boost the immune response of animals, OVA sensitization was performed on days 0 and 14. LB (250 or 500 μg/kg) was administered by oral gavage on days 18 to 23, and the OVA challenge was performed using an ultrasonic nebulizer on days 21 to 23. Plethysmography showed airway hyperresponsiveness (AHR) on day 24. LB treatment effectively decreased inflammatory cell recruitment, T-helper type 2 cytokines in the bronchoalveolar lavage fluid, and immunoglobulin (Ig) E in the serum of the animals with OVA-induced asthma, which was accompanied by a marked reduction in AHR. It also decreased airway inflammation, mucus hypersecretion, phosphorylation of nuclear transcription factor-kappa-B (NF-κB), and expression of activating protein (AP)-1 and mucin 5AC (MUC5AC). Overall, LB effectively attenuated the pathophysiological changes of asthma and its effects appear related to a reduction in the phosphorylation of NF-κB and the expression of AP-1. Thus, our results suggest that LB has a potential to treat allergic asthma.

Asthma is a widespread chronic airway disorder and its prevalence has continuously increased in modern society (Akinbami et al., 2015; Khorasanizadeh et al., 2017). It is also a chronic inflammatory diseases featured as variable airflow obstruction due to inflammatory responses, mucus production and airway hyperreactivity (Park et al., 2016). The pathogenesis of asthma is very complicated because of the various factors involved, such as cytokines, chemokines, growth factors, reactive oxygen species, T-cells and inflammatory cells (Park et al., 2016). Of these factors, increased T helper (Th)2 cytokines are believed to be a crucial pathophysiological cause of asthma, because they are closely associated with eosinophil recruitment, maturation and activation (Lee et al., 2010). In addition, the transcription factors activator protein (AP)-1 and nuclear factor-kappa B (NF-κB) are involved in the progression of inflammatory responses (McLeod et al., 2017). They are activated by various harmful stimuli, after which they translocate into the nucleus and bind to their promoter lesions. Eventually, the transcription factors produce proinflammatory mediators such as cytokines and chemokines (Zhou et al., 2014). Many experimental studies have described NF-κB and AP-1 as important therapeutic targets in asthma (Zhou et al., 2014; Schuliga, 2015).

Peroxisome proliferator-activated receptors (PPARs) are the nuclear receptor superfamily and have three subtypes, α, δ, and γ. All three subtypes are ligand-activated transcription factors (Karak et al., 2013). Although PPAR-α and -γ are known to regulate the expression of the genes involved in lipid metabolism, a previous study reported inhibition of airway inflammation by PPAR-α and -γ in a murine asthma model through inhibition of eosinophilia and lymphocyte influx into airways (Liu et al., 2015). Lobeglitazone (LB) is a novel dual agonist of PPAR-α and γ; it has a higher affinity for PPAR-γ than for PPAR-α, for which it has partial affinity, and is used for the management of type 2 diabetes mellitus (Kim et al., 2011; Lim et al., 2015). A recent study reported that LB reduced neointimal formation after balloon injury in rat carotid arteries by attenuating NF-κB phosphorylation (Lim et al., 2015). However, there are no studies on the protective effects of LB against allergic asthma.

Female BALB/c mice (Specific-pathogen-free, 7 weeks old, 20–25 g, Koatech Co., Pyeongtaek, South Korea) were used after 1 week of quarantine and acclimatization. The mice were housed in polycarbonate cages under a controlled environment (temperature 22 ± 2°C and humidity 55 ± 5%). All procedures were granted by the Institutional Animal Care and Use Committee of Chonnam University (CNU IACUC-YBR-2016-19, Gwangju, Korea).

Ovalbumin induced asthma model was performed as described previously (Lee et al., 2010). Seven mice per mice were used in the experiment. The mice were treated with 20 μg OVA (Sigma-Aldrich, St. Louis, MO, United States) mixed with 2 mg aluminum hydroxide (Sigma-Aldrich) by intraperitoneal injection on days 0 and 14. One week after the final sensitization, OVA (1%, w/v, in PBS) challenge was performed for 1 h on days 21, 22, and 23. Dexamethasone (3 mg/kg, Dex, Sigma-Aldrich) and LO (250 μg/kg and 500 μg/kg, LB-0.25 and -0.5, respectively, Chong Kun Dang Pharm., Seoul, South Korea) were administered once daily by oral gavage from days 18 to 23. On day 24, airway hyperresponsiveness (AHR) in conscious and unrestrained mice was determined using whole-body plethysmography (OCP3000 instrument; Allmedicus, Seoul, South Korea). Bronchoalveolar lavage fluid (BALF) was obtained on day 25. Briefly, the mice were anesthetized via an intraperitoneal injection of Zoletil 50 (Virbac, France) and a tracheotomy was performed. The trachea was cannulated and the left bronchi were tied for histological experiments. Following instillation of ice cold PBS (0.5 mL) into the lungs, BALF was obtained using three times (total volume 1.5 mL). After the exclusion of dead cells through Trypan blue staining, the total inflammatory cell numbers were determined by counting the cells in at leat five squares of a hemocytometer. The differential cell count of the BALF was performed using Diff-Quik® reagent (IMEB Inc., Deerfield, IL, United States).

Assessment of Th2 Cytokines, Chemokine, and Immunoglobulin E Levels in BALF or Serum

For the histological examination, prior to lung removal, the left lung (which had not been lavaged) was filled intratracheally with 0.8% formalin and 4% acetic acid) and fixed in neutral buffered formalin [10% (v/v)]. The tissues were embedded, sectioned (4 μm), and stained with hematoxylin and eosin solution (Sigma-Aldrich) or the periodic acid-Schiff solution (IMEB Inc.). To investigate protein expression in lung tissue, we performed an immunohistochemical analysis. Paraffin-embedded sections were deparaffinized, dehydrated, washed with PBS containing 0.3% Triton X-100, and incubated for 10 min at room temperature with 10% goat serum to block non-specific staining. The slides were incubated overnight with primary mouse MUC5AC antibody that was used at a concentration of 1:100 dilution (Abcam). After incubating with the primary antibodies, the slides were washed and incubated with biotinylated secondary antibodies at 37°C for 1 h and then incubated with an avidin-biotin-peroxidase complex (Vector Laboratories, Burlingame, CA, United States) for 1 h at room temperature. The excess complex was removed and slides were washed with PBS prior to incubating in 0.05% diaminobenzidine (1:200, Millipore Co., Bedford, MA, United States) for 10 min. The slides were counterstained, rinsed with PBS to terminate the reaction, and protected with coverslips prior to microscopic examination. Quantitative analysis of histology was conducted using the IMT i-Solution software (IMT i-Solution Inc., Vancouver, BC, Canada).

Results are expressed as means ± standard deviation values. Statistical significance was determined using analysis of variance followed by Dunnett’s adjustment. A P-value < 0.05 was considered as significant.

Effects of LB on AHR 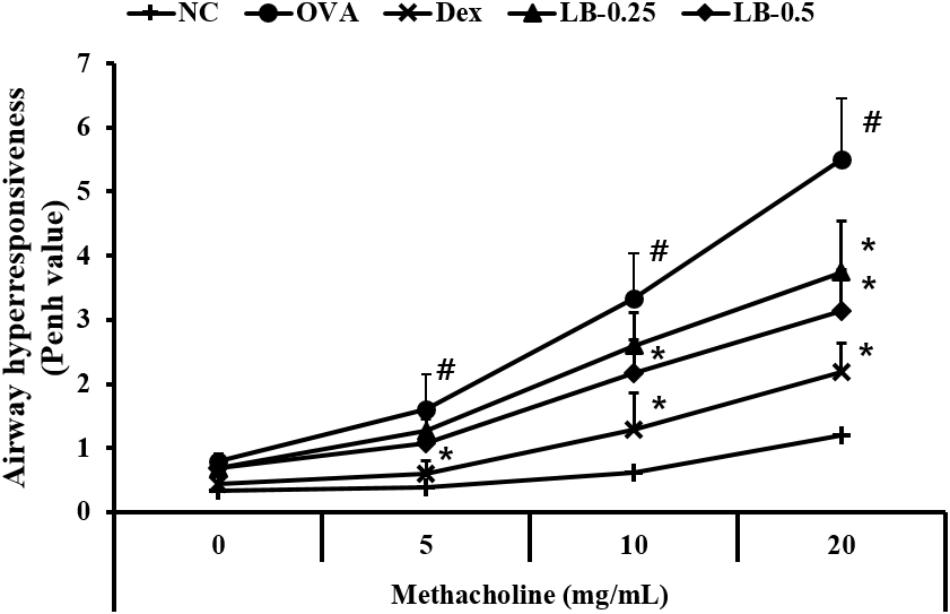 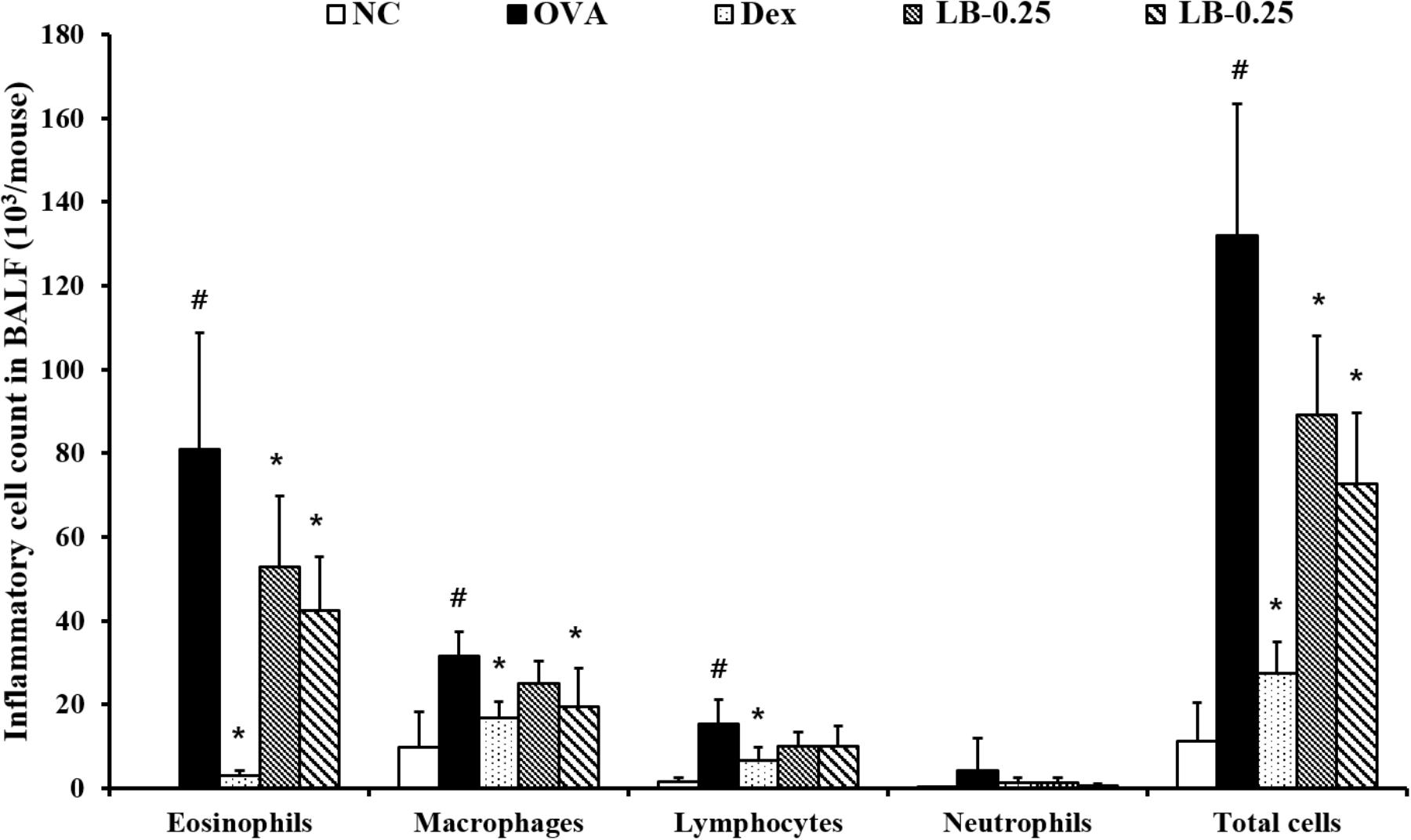 T helper cytokines are regarded as a critical factor in the development of allergic asthma represented by AHR, eosinophilic inflammation, and mucus hypersecretion. These cytokines promote inflammatory cell infiltration, Ig E production, and mucus overproduction and are involved in the production of other proinflammatory mediators such as chemokines, inflammatory proteins, and proteolytic enzymes (Schatz and Rosenwasser, 2014). In particular, eosinophil infiltration into the airways results from the production of IL-5 and IL-13, which play important roles in the proliferation, activation, and migration of eosinophils (Lee et al., 2010). In this work, LB significantly decreased the levels of Th2 cytokines in OVA sensitized and challenged animals, which was accompanied by a decline of eosinophils count, total IgE and OVA-specific IgE. These results were strongly supported by the findings of the histological analysis. LB treatment effectively decreased inflammatory responses and mucus production in OVA sensitized and challenged animals. These results suggest that LB exhibits protective effects against asthmatic responses by reducing Th2 cytokine levels.

In conclusion, LB attenuated asthmatic signs including airway inflammation and mucus hypersecretion in OVA sensitized and challenged animals. These effects were closely related to the downregulation of NF-κB phosphorylation and AP-1 expression in lung tissue. Thus, LB may effectively inhibit OVA-induced asthma.

This research was supported by grants for Evaluation of effectiveness of alternative Herbal Medicine Resources (K18402) from Korea Institute of Oriental Medicine (KIOM).

Copyright © 2018 Shin, Park, Ko, Cho, Lee, Kim, Shin and Kim. This is an open-access article distributed under the terms of the Creative Commons Attribution License (CC BY). The use, distribution or reproduction in other forums is permitted, provided the original author(s) and the copyright owner(s) are credited and that the original publication in this journal is cited, in accordance with accepted academic practice. No use, distribution or reproduction is permitted which does not comply with these terms.