(-)-Epigallocatechin-3-gallate (EGCG), which is the most abundant catechin in green tea, has many potential health benefits, including decreased weight gain and/or adipose tissue weight. Suggested mechanisms for body weight reduction by EGCG include: (1) a decrease in calorie intake and (2) activation of AMPK in liver, skeletal muscle, and white adipose tissue. However, only one study supports the AMPK hypothesis. To determine the role of AMPK in EGCG-induced reduction of body weight, we administrated 50 mg/kg and 100 mg/kg per day to mice, together with a high-fat diet (HFD), for 20 weeks. EGCG had a significant effect on obesity and decrease in epididymal adipose tissue weight, and also affected serum lipid characteristics, including triglyceride, cholesterol (CHOL), and high- and low-density lipoprotein CHOL (HDL-C, LDL-C) concentrations. In addition, EGCG increased the excretion of free fatty acids from feces. By measuring the mRNA expression levels of genes involved in lipid metabolism, we found that EGCG inhibited the expression of genes involved in the synthesis of de novo fatty acids (acc1, fas, scd1, c/ebpβ, pparγ, and srebp1) and increased the expression of genes associated with lipolysis (hsl) and lipid oxidization in white adipose tissue, in both the HFD and the EGCG groups. However, EGCG significantly increased the expression of genes involved in the synthesis of de novo fatty acids compared with the HFD group. Increased AMPK activity was found in both subcutaneous and epididymal adipose tissues. In conclusion, EGCG can decrease obesity and epididymal white adipose tissue weight in mice, only partially via activation of AMPK.

Overweight and obesity have increased at alarming rates in recent years and are now prevalent throughout the world. Overweight and obesity are usually caused by an energy imbalance between calorie intake and consumption, in particular, a high dietary intake of fats and sugars (Bolton-Smith and Woodward, 1994; Gibson, 1996; Yeomans, 2017; Zambrano and Nathanielsz, 2017). A population-based study from 1975 to 2014, with more than 19.2 million adult participants, revealed that about 641 million individuals worldwide were obese in 2014, compared with 150 million in 1975. Over the past four decades, a global transition has taken place, from a world in which the prevalence of underweight was more than double that of obesity, to one in which more people are obese than underweight (NCD Risk Factor Collaboration [NCD-RisC] et al., 2016). There is a strong positive association between obesity and various chronic diseases, including type 2 diabetes, high blood pressure, cardiovascular disease, stroke, and even some cancers (Rossner, 2002; Basen-Engquist and Chang, 2011; Sartorius et al., 2016; Smith et al., 2017). These are harmful to the individual’s health, as well as creating a great economic burden for their families. Therefore, effective weight management interventions, including low-calorie diets and exercise, might have an important role in alleviating obesity and metabolic diseases (Lyznicki et al., 2001).

Green tea is consumed worldwide, especially in East Asia. The main components of green tea are caffeine and polyphenolic compounds known as catechins. Of the catechins, (-)-epigallocatechin-3-gallate (EGCG) is the most abundant in green tea. EGCG has been reported to be responsible for many of the potential health benefits of green tea, including decreased weight gain and alleviated insulin resistance (Richard et al., 2009; Sae-tan et al., 2011).

In recent years, some studies have shown that the consumption of green tea extract or EGCG could significantly reduce gain of body weight and/or adipose tissue, decrease blood glucose or insulin levels, and increase insulin sensitivity or glucose tolerance in rodents, compared with those fed high-fat diets (HFDs) or genetically obese/diabetic animal models. Bose et al. found that supplementation with dietary EGCG (3.2 g/kg diet) for 16 weeks significantly reduced body weight gain, body fat percentage, and visceral fat weight in mice compared with those not receiving EGCG treatment (Bose et al., 2008). Lee et al. fed an HFD to C57BL/6J mice for 8 weeks to induce obesity; subsequently, the mice were divided into three groups and maintained on a high-fat control diet or on an HFD supplemented with 0.2 or 0.5% EGCG (w/w) for further 8 weeks. EGCG significantly reduced the body weight and mass of various adipose tissues, and considerably reduced levels of plasma triglycerides (TAGs) and liver lipids (Lee et al., 2009). Chen et al. also found that EGCG treatment significantly reduced body weight gain in mice with high-fat/Western-style diet (HFW)-induced obesity, attenuated insulin resistance, and decreased blood glucose and liver TAG levels compared with the HFW-only group (Chen et al., 2011). Ortsater et al. found that dietary supplementation of EGCG (1% of diet) significantly reduced body weight and also prevented the progression of glucose intolerance in db/db mice (Ortsater et al., 2012). Several epidemiological studies revealed the beneficial effects of tea and EGCG on obesity in humans; however, the results were not always positive in human participant studies (Suzuki et al., 2016). For example, Baladia et al. performed a systematic review and meta-analysis, and found that green tea extracts had no statistically significant effect on the weight of overweight or obese adults; there was a small effect on the decrease in the percentage of fat mass (Baladia et al., 2014). Therefore, loss of body fat may require a higher intake of EGCG or other catechins, or the addition of metabolic stimulants (Yang et al., 2016).

Yang et al. (2016) reviewed the mechanisms of body weight reduction and alleviation of metabolic syndrome by green tea. They proposed two major mechanisms involving EGCG: (1) decreased absorption of lipids and proteins in the intestine, thus reducing calorie intake and (2) activation of AMPK in liver, skeletal muscle, and white adipose tissue. According to their “AMPK hypothesis,” AMPK plays a major part in mediating the actions of EGCG on fatty acid synthesis and fatty acid catabolism. However, only one study has reported activation of AMPK by EGCG in cultured cells and in liver tissues of mice, suggesting that the effects of catechins, including their anti-obesity and anti-cancer effects, are at least partially mediated by activation of AMPK (Murase et al., 2009). Thus, it is still unknown whether activation of AMPK has a central role in the reduction of adipose tissue by EGCG, and whether AMPK has similar roles in different depots.

In this study, we administered different doses of EGCG to C57BL/6J mice to determine its anti-obesity and hypolipidemic effects. We also aimed to explore (1) whether EGCG-activated AMPK phosphorylation played a central part in reducing the accumulation of fats in adipose tissues and (2) whether EGCG had similar effects on the regulation of lipid accumulation in different adipose depots.

Male C57BL/6J mice around 6 weeks old were obtained from Changzhou Card Vince Experimental Animal Co., Ltd., C57BL/6J mice were housed individually in an environmentally controlled room (ventilation, 22 ± 2°C, 55 ± 5% relative humidity) with ad libitum access to water and food, and maintained on a 12-h light–dark cycle. EGCG (purity > 98%, Chengdu Biopurify Phytochemicals Ltd.) was prepared with distilled water as a 10 mg/mL storage solution and stored in the dark at -20°C until use for gavage.

Mice were fed with a control diet containing 10 kca% fat (D12450J, Research Diets) 2 weeks prior to initiating the experiment. The mice were divided into four groups at around 8 weeks old; each group included eight male mice. Mice in the control group were fed a control diet (D12450J, Research Diets). Mice in the HFD group were fed a high-fat diet containing 60 kca% fat (D12492, Research Diets). Mice in the HFD + EGCG groups were fed the HFD and, separately, 50 mg/kg of EGCG and 100 mg/kg EGCG were administered intragastrically per day. After 20 weeks of feeding, changes in body weight, food intake, water intake, and blood glucose were recorded. The mice were then sacrificed and tissues were collected, immediately frozen with liquid nitrogen, and stored at -80°C. To estimate the obesity of mice in this study, we used the Lee index [body weight (g)∗0.33∗1,000/body length (cm)], a widely used method to judge body weight and obesity in small-sized experimental animals (Lee, 1929; Bernardis and Patterson, 1968). The animal experiments in this study were approved by the animal ethics committee of Yunnan Agricultural University (No 20160318002, March 18, 2016). 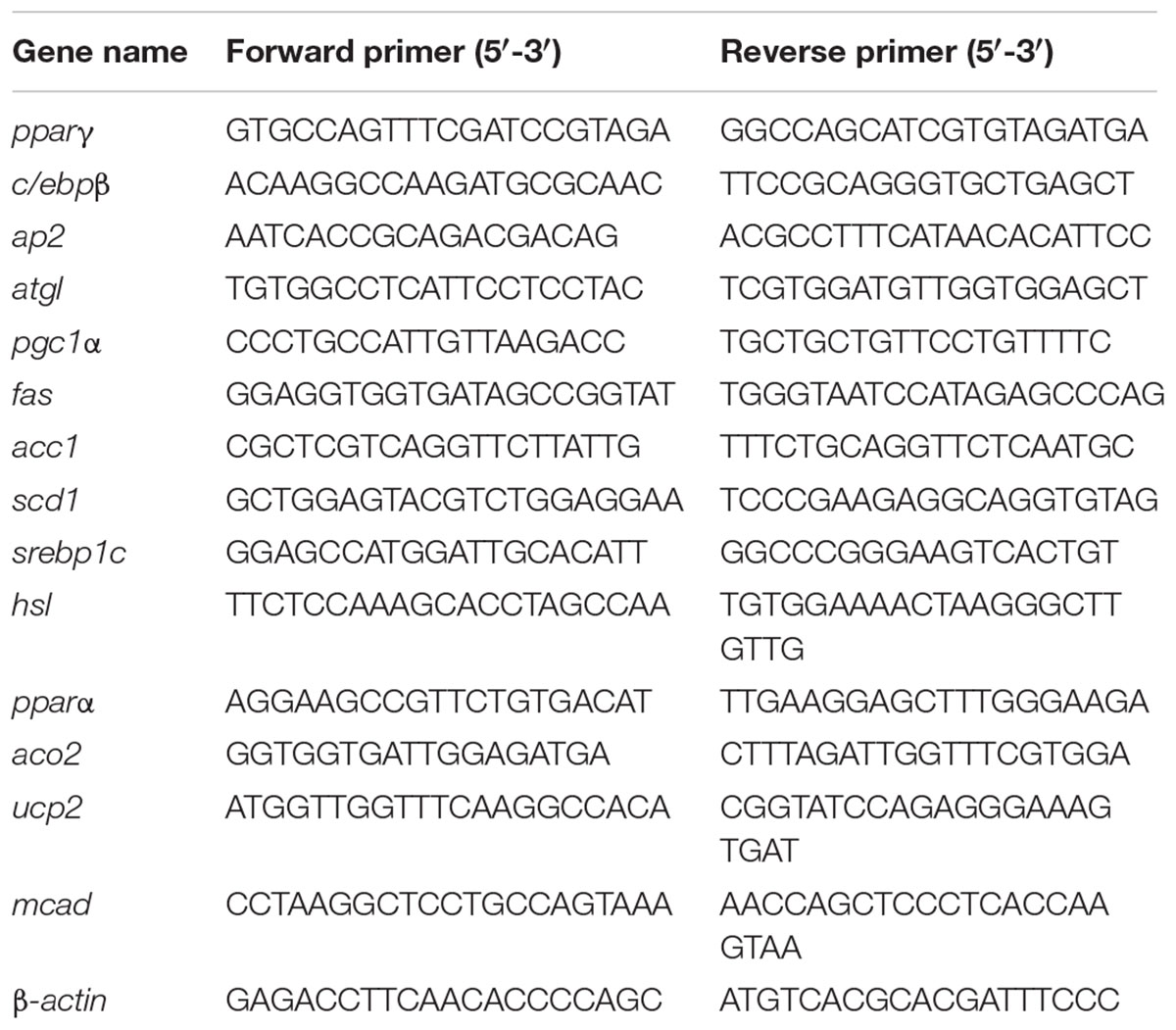 Blood was taken from the inside canthus and collected in micro-centrifuge tubes with heparin sodium. The blood samples were centrifuged at 3,000 rpm for 20 min, and the plasma was kept frozen at -20°C until analysis. Total cholesterol (TC), TAG, high-density lipoprotein cholesterol (HDL-C), and LDL-C levels were measured. All blood sample analysis took place at the Second Affiliated Hospital in Kunming. 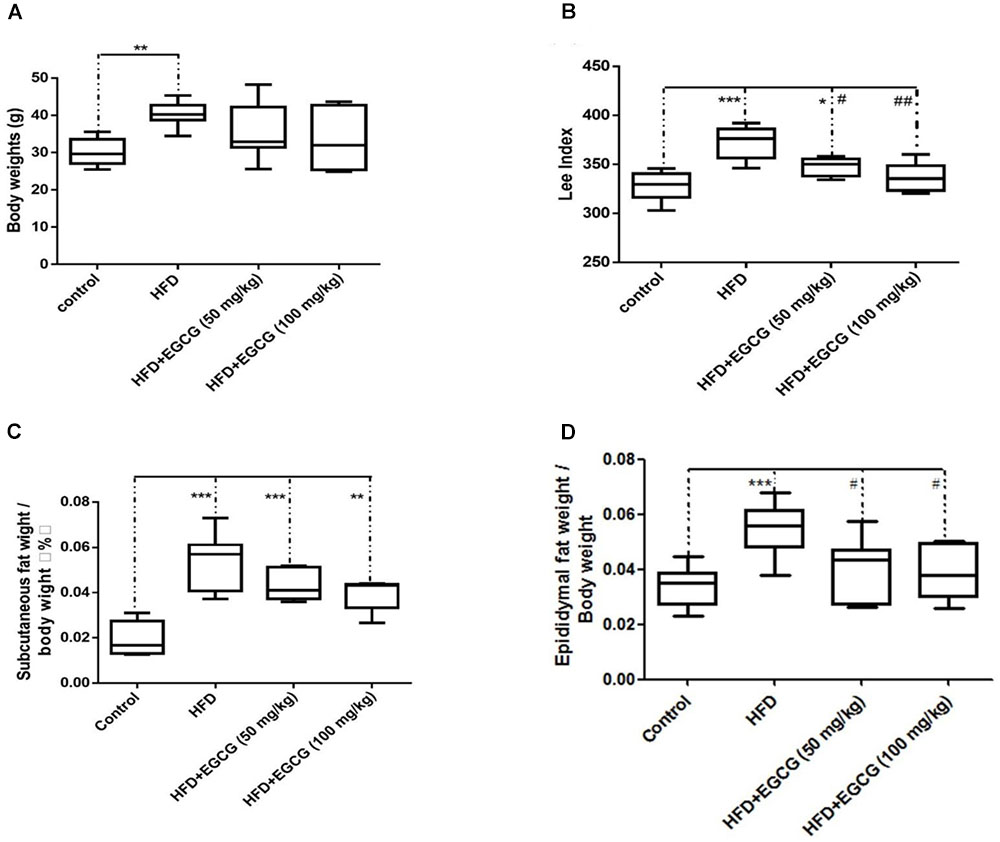 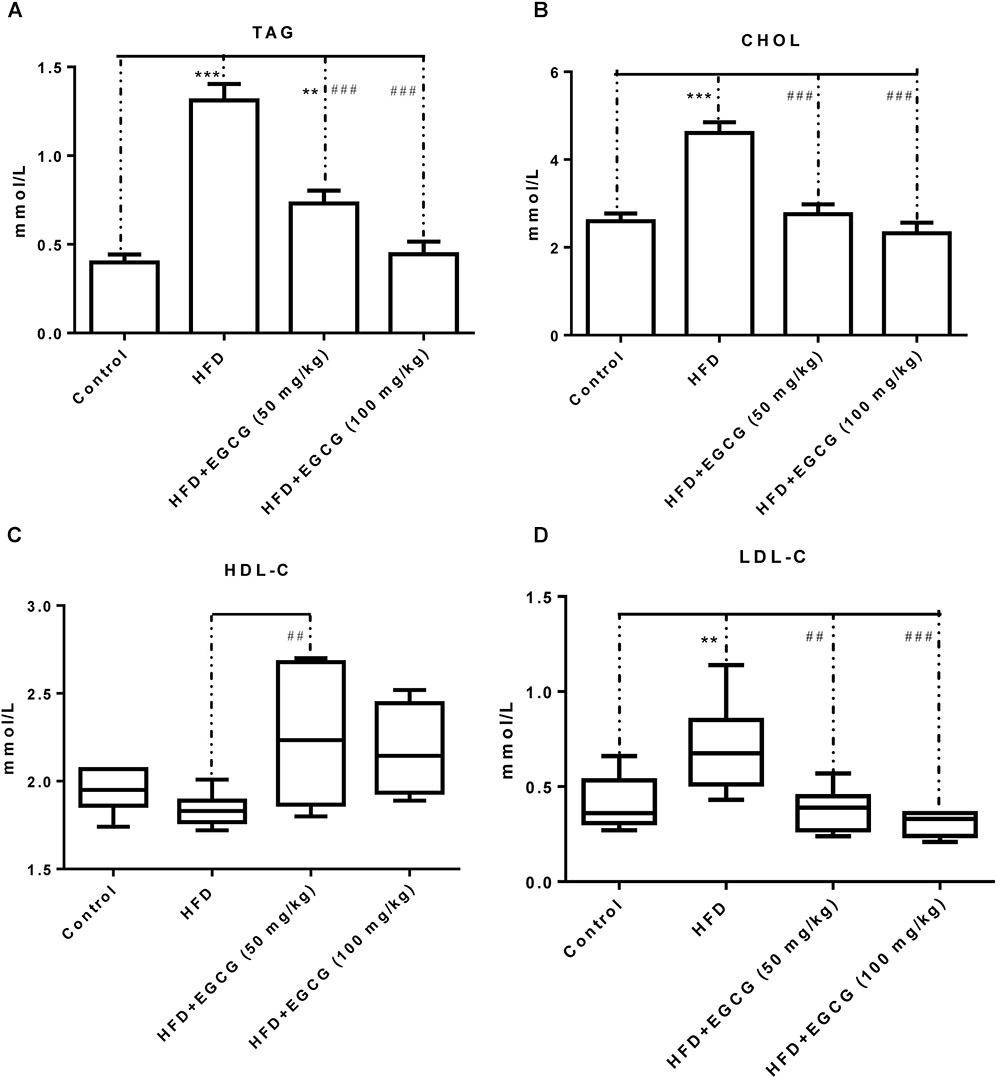 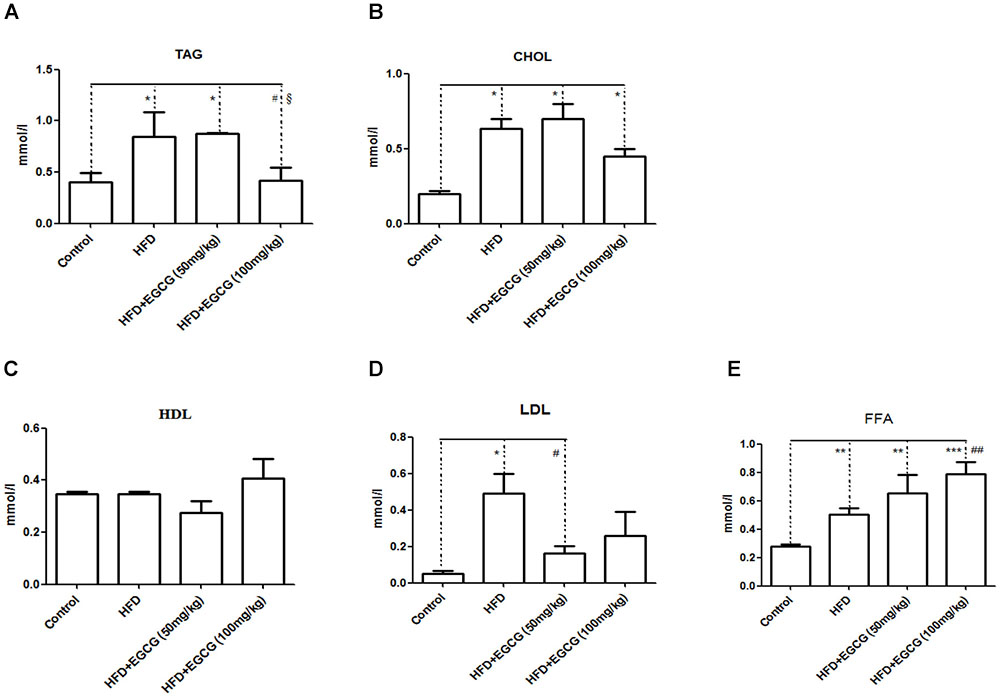 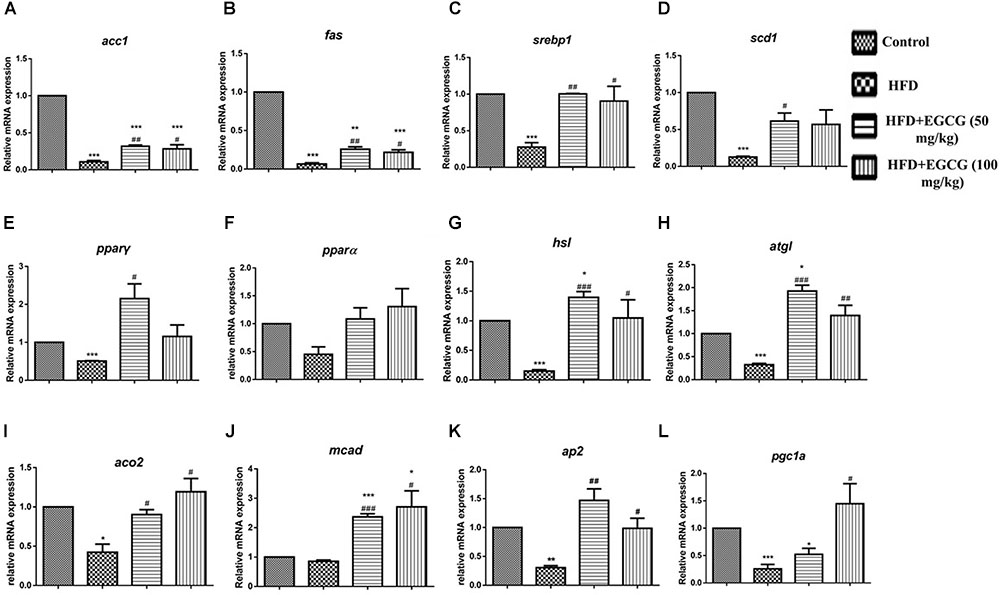 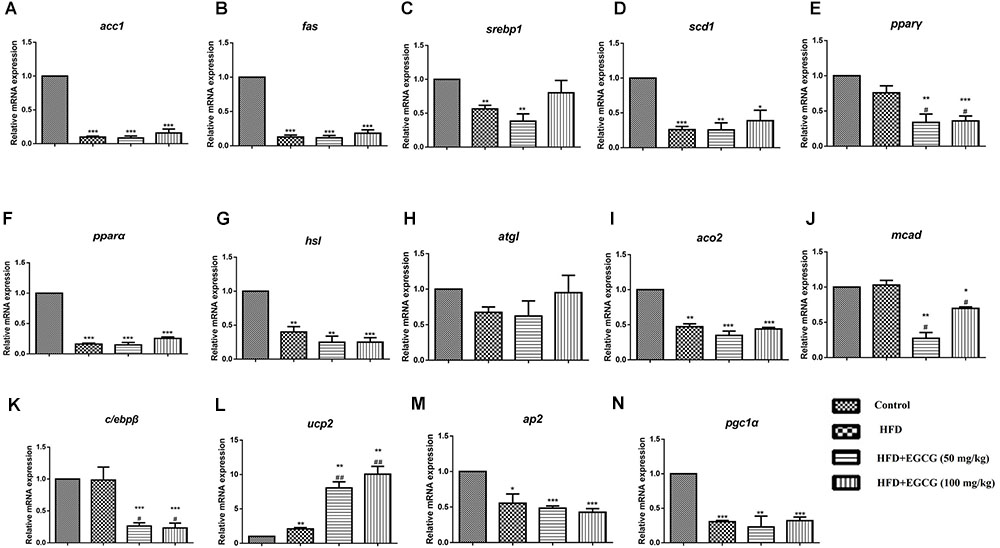 Yang et al. has proposed that AMPK has a major role in mediating the effects of EGCG on fatty acid synthesis and fatty acid catabolism (Yang et al., 2016). Therefore, we determined the activity of AMPK. In both subcutaneous adipose tissues and epididymal adipose tissues, AMPK activity was significantly activated in 100mg/kg⋅d EGCG groups compared with other groups (Figures 6A,B). 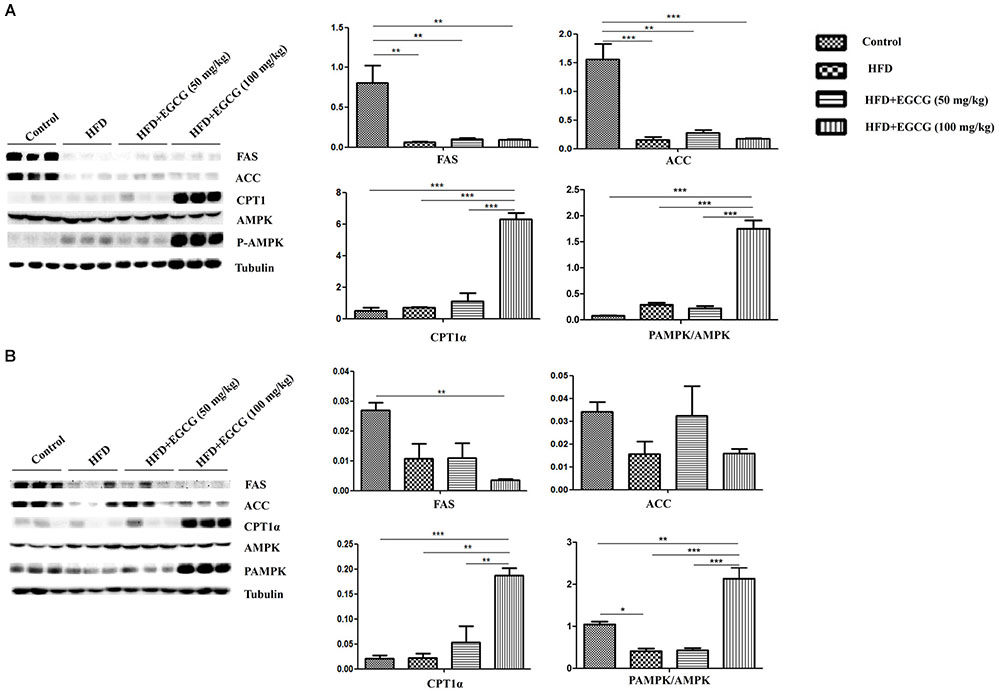 The objective of the present study was to determine whether the fat-loss functions of EGCG involved similar effects on regulation of lipid accumulation in different adipose depots, as well as to explore the underlying mechanisms. In this study, we found that administration of EGCG, no matter 50 mg/kg per day or 100 mg/kg per day could not reduce gain of body weight (Figure 1A). However, EGCG had significant positive effects on obesity and epididymal fat accumulation in mice (Figures 1B,C,D). These results seemed contradictory in this study. The reason might be that our experiment had lasted for 20 weeks, some mice had higher body lengths along with higher body weights but not obese, which might have some effects on data analysis. So, we calculated the obesity difference among groups using Lee index, and found that EGCG could reduce obesity in mice (Figure 1B). Then we calculate the fat index of mice, and found that EGCG significantly reduced fat accumulation in epididymal fat tissues, but not in subcutaneous fat tissues. These results indicate that EGCG reduce obesity might mainly via reducing lipid accumulation in epididymal fat tissue. Our results were partially consistent to previous studies of Lee et al. (2009) and Chen et al. (2011). The reason might be that the doses of EGCG were different between our study and previous studies.

Copyright © 2018 Li, Gao, Yan, Zhang, Wang, Hu, Wu, Wang and Sheng. This is an open-access article distributed under the terms of the Creative Commons Attribution License (CC BY). The use, distribution or reproduction in other forums is permitted, provided the original author(s) and the copyright owner(s) are credited and that the original publication in this journal is cited, in accordance with accepted academic practice. No use, distribution or reproduction is permitted which does not comply with these terms.