Ninjin’yoeito (NYT), a traditional Japanese Kampo medicine formula, is used as a remedy for conditions, and physical weakness. Cancer cachexia is seen in advanced cancer patients and is defined by an ongoing loss of skeletal-muscle mass that leads to progressive functional impairment. In the present study, we examined the hypothesis whether NYT improves the functional loss of skeletal muscle cancer cachexia. Male C57/BL 6J mice with B16BF6 melanoma tumor showed decreased expression of myosin heavy chain (MHC) in the gastrocnemius muscle. Moreover, the expression of SOCS3 and phosphorylated STAT3 and AMPK was increased, and the expression of phosphorylated 4E-BP1 was decreased in the gastrocnemius muscle of tumor-bearing mice. These data suggested that amino acid metabolism was altered in tumor-bearing mice, which were normalized by the NYT intervention. The present study showed that NYT might be a novel therapeutic option for the treatment of sarcopenia occurring cancer cachexia.

Frailty is a common clinical syndrome in older adults that imparts an increased risk to poor health outcomes, including motor and mental disability (Fried et al., 2001). Frailty is triggered by several factors and the main reason is thought to be the dysfunction of skeletal muscle, called sarcopenia (Xue, 2011). Sarcopenia is the state of skeletal muscle tissue loss that is well observed in several disease such as obesity and diabetes (Cleasby et al., 2016). Sarcopenia attenuates the skeletal muscle function leading to the decline of physical activity (Evans, 2010). Malnutrition, caused by reduced activity and appetite, accelerates the progression of sarcopenia. The weakness originating from sarcopenia is a serious problem in the countries, which aim at healthy longevity in a super-aged society.

To evaluate the occurrence of sarcopenia in rodents, aged and disease models have been used. Particularly, the rodent cancer model showed extreme weight loss resulting from the skeletal muscle loss. In addition, this cancer model also showed complex disease symptoms during aging, called as cancer cachexia (Brennan, 1977). In cancer cachexia, food intake is reduced, and the reductions of protein and energy storage are evident due to the metabolic disturbance. Unlike other metabolic disturbances and aging animal models, our cancer cachexia model showed early reduction of skeletal muscle mass (Asp et al., 2010).

This evidence let us speculate that NYT could improve the symptoms of frailty. Therefore, we examined the effect of NYT on melanoma-induced cancer cachexia in mice.

All animal experiments were approved by the Animal Care Committee of the Graduate School of Pharmaceutical Sciences, Nagoya City University, and were carried out in accordance to the guidelines of the National Institutes of Health and the Japanese Pharmacological Society.

Male C57BL/6J mice (12 to 16-week-old; Japan SLC, Shizuoka, Japan) were used for each experiment. Mice were housed in a room with 5–6 mice in each cage, maintained at 23 ± 2°C with an alternating 12 h-light-dark cycle. Animals had free access to food and water, and were used only once in all the experiments.

B16F10 melanoma cells (American Type Culture Collection) were cultured in MEM enriched with 10% fetal bovine serum (FBS). When the cells were confluent, they were treated with trypsin/EDTA (0.05/0.02%) and detached. The trypsin/EDTA solution was recovered, neutralized with DMEM supplemented with 10% FBS and centrifuged at 500 ×g for 5 min. On day 0, 2.0 × 106 cells suspended in 200 μL MEM were injected into the right flank, just under the skin of each mouse of the tumor group. An equal volume of MEM was injected into control group.

Changes in the Body Components of B16BL6 Melanoma Cell-Transplanted Mice 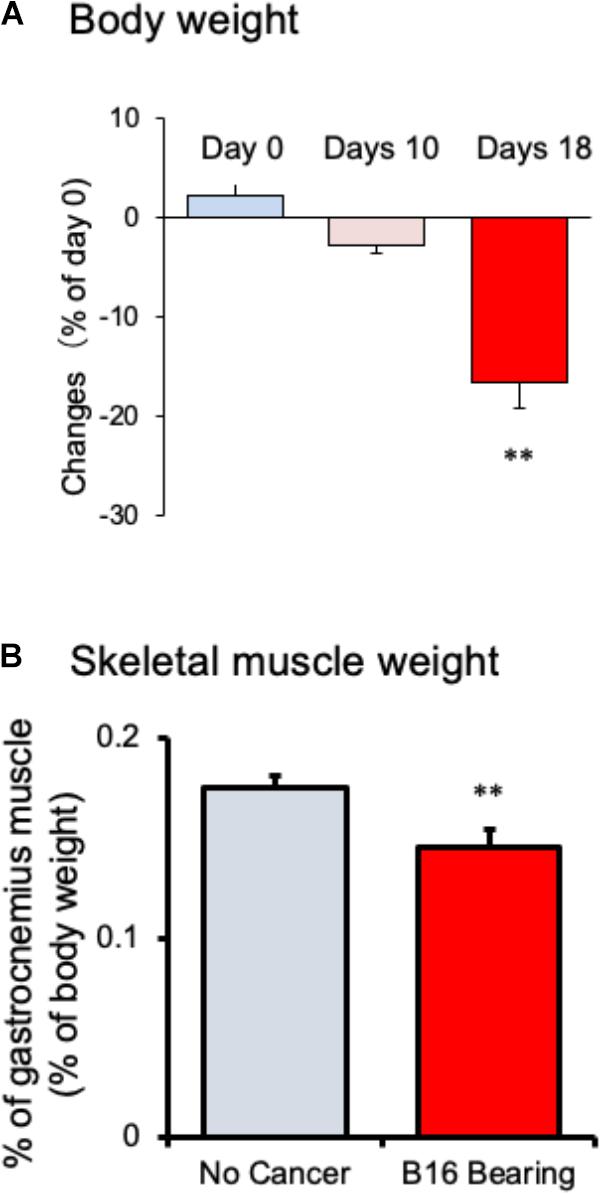 FIGURE 1. Changes in (A) body weight and (B) gastrocnemius skeletal muscle weight in mice with cancer cachexia. Samples were collected after 18 days of B16BF6 melanoma implantation. Each column represents the mean with SEM from 10 mice. ∗∗P < 0.01 vs. Day 0 or no cancer group.

Changes in the Skeletal Muscle Protein Expression of Tumor-Bearing Mice 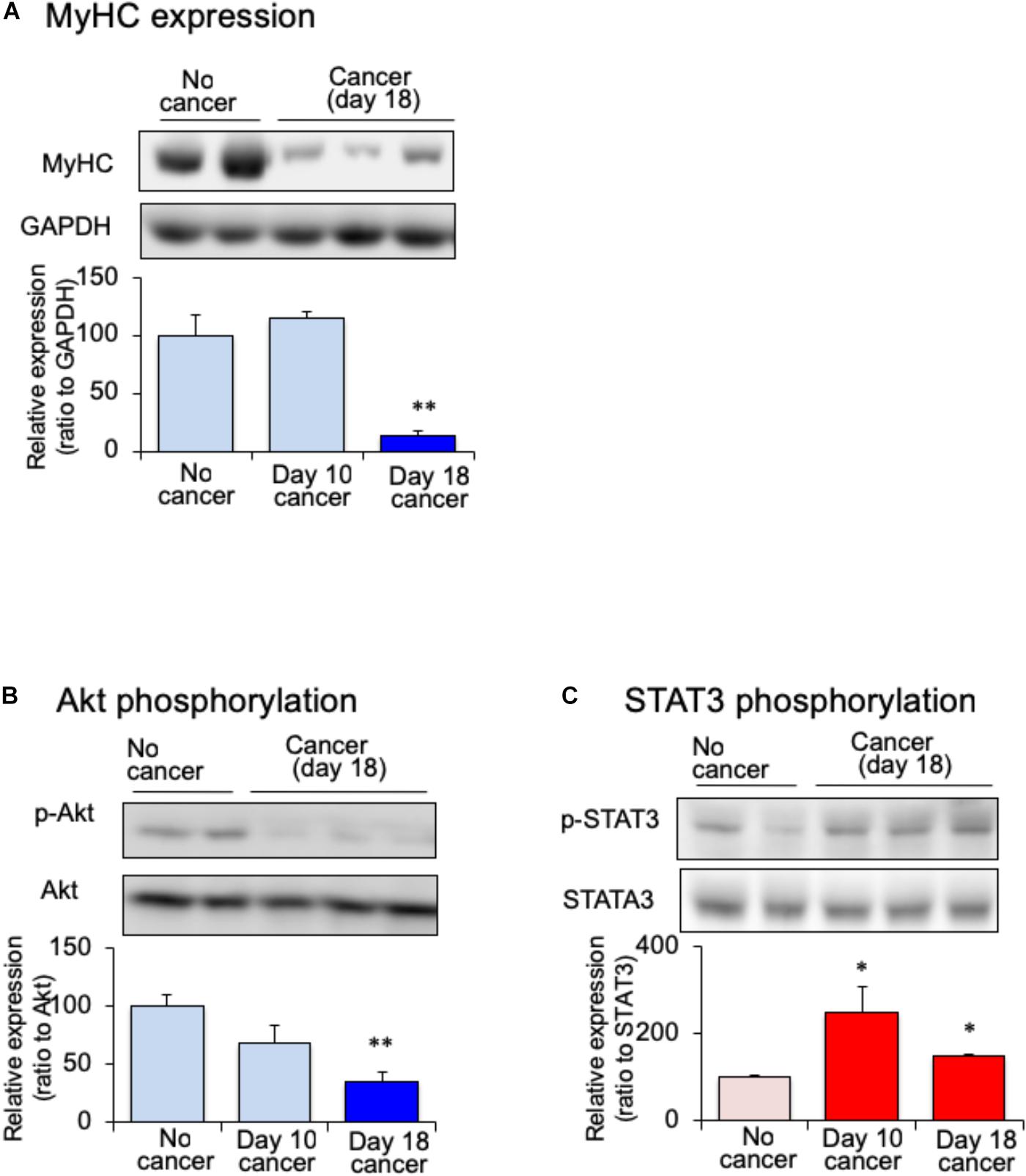 FIGURE 2. Changes of skeletal myosin heavy chain (MHC), (A) skeletal phosphorylated Akt (B) and skeletal phosphorylated STAT3 (C) in mice with cancer cachexia. Samples were collected after 10 or 18 days of B16BF6 melanoma injection. Each column represents the mean with SEM from six independent experiments. ∗P < 0.05 vs. no cancer group. ∗∗P < 0.01 vs. Day 0 or no cancer group.

Effect of NYT on Body Changes in Tumor-Bearing Mice 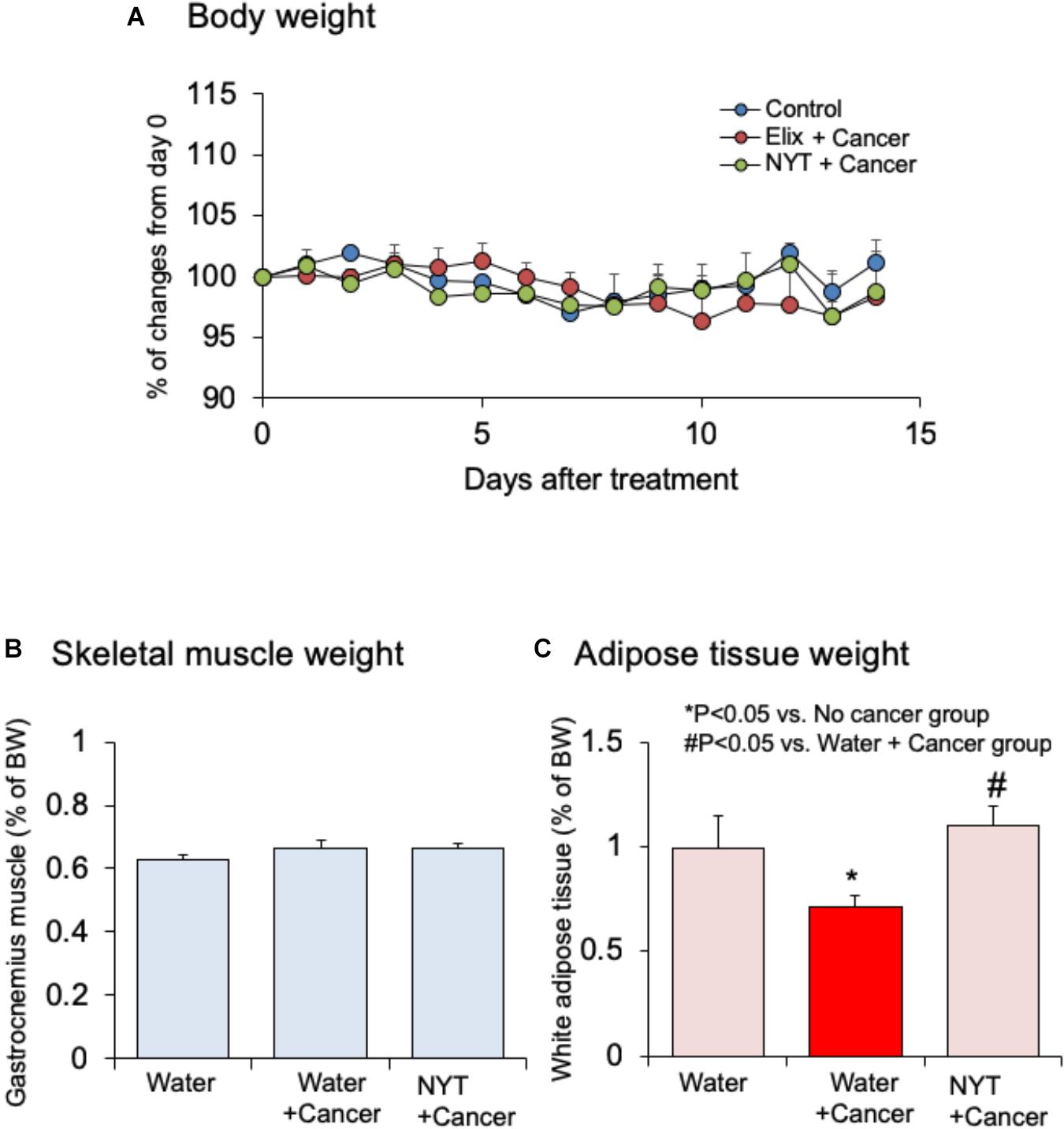 FIGURE 3. Effects of Ninjin’yoeito (NYT) on the alterations in (A) body weight, (B) gastrocnemius skeletal muscle weight, and (C) epididymal adipose tissue weight in mice with cancer cachexia. NYT was administered once a daily from 1 h before B16BF6 melanoma implantation and continued for 14 days. Each column represents the mean with SEM from 10 mice. ∗P < 0.05 vs. water-treated no-cancer group. #P < 0.05 vs. water-treated cancer group. 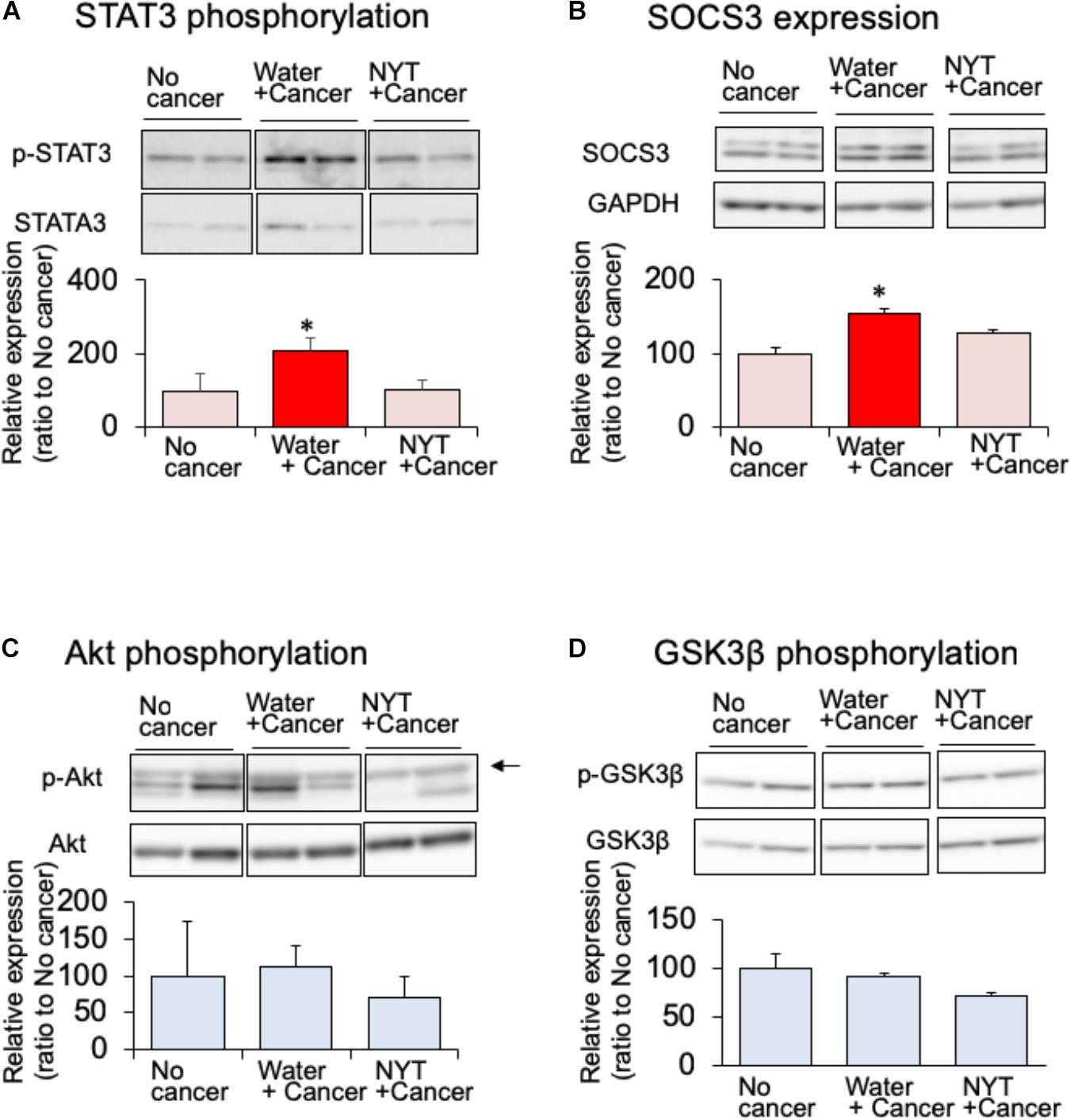 FIGURE 4. Effect of NYT on the phosphorylation of STAT3 (A), SOCS3 expression (B), phosphorylation of Akt (C), and phosphorylation of GSK-3β (D) in the skeletal muscle of mouse with cancer cachexia. NYT was administered once a daily from 1 h before B16BF6 melanoma implantation and continued for 14 days. Samples were collected 24 h after last treatments. Each immunostaining obtained from same membrane. Each column represents the mean with SEM from three independent experiments. ∗P < 0.05 vs. water-treated no-cancer group.

Amino acid metabolism is a key factor required for the maintenance of skeletal muscle protein. It is well known that mammalian target of rapamycin (mTOR) and eukaryotic translation initiation factor 4E-binding protein 1 (4E-BP1) regulate amino acid synthesis in the skeletal muscle (White et al., 2013). The activity of 4E-BP1 is regulated by mTOR-induced phosphorylation. The expression of phosphorylated 4E-BP1 after 14 days of melanoma implantation in the gastrocnemius muscle was significantly attenuated in tumor-bearing mice compared to that in the no-cancer group (Figure 5A). Such attenuated phosphorylation of 4E-BP1 was not evident in the daily repeated treatment with NYT (1 g/kg, p.o.) mice. mTOR signal is suppressed by 5′-adenosine monophosphate-activated protein kinase (AMPK) that is activated due to starvation of skeletal muscle (Bolster et al., 2002). The expression of the active form of AMPK (phosphorylated AMPK) was increased in the gastrocnemius muscle of tumor-bearing mice after 14 days of melanoma implantation (Figure 5B. Such increased phosphorylation was significantly attenuated by the repeated treatments with NYT. The reduction in MHC expression in the gastrocnemius muscle of tumor-bearing mice was ameliorated by the daily repeated treatment with NYT (Figure 5C). 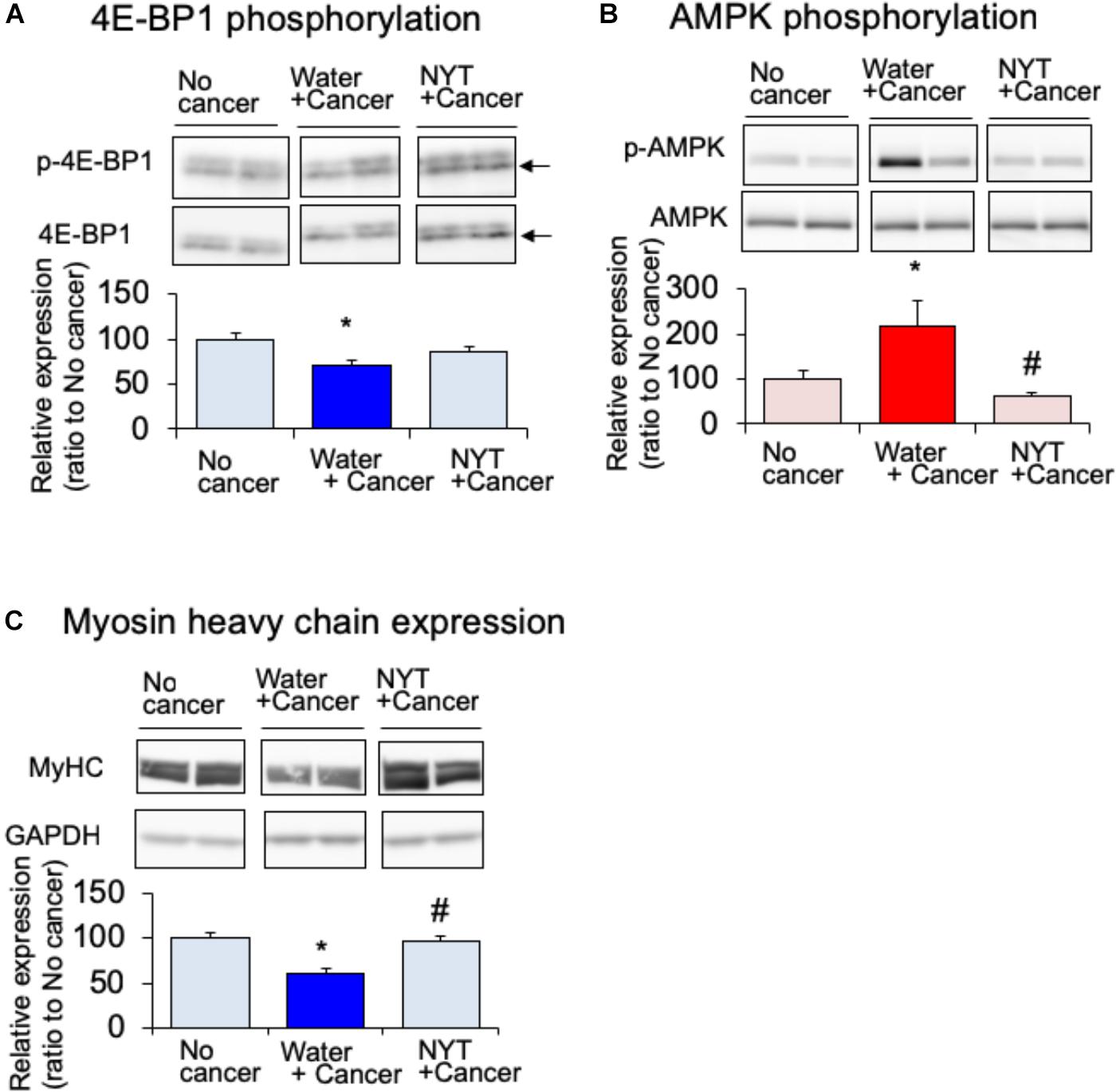 FIGURE 5. Effect of NYT on the phosphorylation of 4E-BP1 (A), phosphorylation of AMP kinase (B), and the expression of myosin heavy chain (MHC) (C) in the skeletal muscle of mouse with cancer cachexia. NYT was administered once a daily from 1 h before B16BF6 melanoma implantation and continued for 14 days. Samples were collected 24 h after last treatments. Each immunostaining obtained from same membrane. Each column represents the mean with SEM from six independent experiments. ∗P < 0.05 vs. water-treated no-cancer group. #P < 0.05 vs. water-treated cancer group.

Mammalian target of rapamycin signaling is regulated by several intracellular signaling molecules. It is well known that Akt signaling, which is activated by insulin, stimulates mTOR signaling. On the other hand, STAT3, which is activated by inflammatory cytokines, inhibits mTOR signaling (Bonetto et al., 2011). The present study showed that STAT3 signaling is activated in the skeletal muscle of tumor-bearing mice, and this activation is evident before the onset of skeletal muscle loss. STAT3 is strongly phosphorylated by the activation of GP130, which is receptor of interleukin-6 (IL-6), IL-11, leukemia inducing factor, and oncostatin M (Gearing et al., 1992). IL-6 is released under inflammation and is involved in the insulin resistance of obesity or diabetes (Klover et al., 2003). In obesity and diabetes mellitus, adipocyte enlargement and subsequent cell death leads to the infiltration of immune cells into adipose tissue (Ogawa and Kasuga, 2008). Infiltrated immune cells into adipose tissue can release inflammatory cytokines. Because the released inflammatory cytokines affect the function of adipocytes, IL-6 is also released from adipocytes. It is possible that STAT3 signaling might be activated by the enhanced release of IL-6 that is mediated by the functional alterations of adipocytes. Therefore, the attenuation of mTOR signaling in the skeletal muscle of tumor-bearing mice might be caused by the activation of STAT3 signaling through the enhanced production of adipocyte IL-6.

IL-6 also regulates the activity of AMPK. Overexpression of skeletal IL-6 induces AMPK phosphorylation, in addition to the phosphorylation of STAT3 (White et al., 2013). AMPK is a serine/threonine kinase, which is activated by the increase in intracellular AMP/ATP ratio, and regulates the master-switch of glucose and lipid metabolism. It is also reported that AMPK regulates protein synthesis and stimulates the degradation of myofibril proteins (Nakashima and Yakabe, 2007). AMPK-induced protein degradation has been suggested to be mediated by the inhibition of mTOR signaling or promotion of protein ubiquitination (Bolster et al., 2002). The present study also indicated that AMPK is activated in the skeletal muscle of tumor-bearing mice. Therefore, it is hypothesized that the activation of AMPK is partly involved in the reduction of skeletal muscles of tumor-bearing mice.

The dosage of NYT has been fixed from human clinical doses. The therapeutic dosage of NYT for human prescription authorized by Ministry of Health, Labor and Welfare of Japan is 6.7 g/day. The adequate amount of oral NYT dose for mice was determined to be 1.0 g/kg (Miyamoto et al., 2017).

In the present study, the mechanisms of STAT3 activation in the skeletal muscle have not been clarified. The adipose tissue weight of tumor-bearing mice was less than that in no-cancer mice. This reduced adipose tissue weight was reversed by the daily treatment with NYT. It is possible that NTY might protect the adipose tissue from the influence of cancer. Because the activated immune cells and enlarged adipocytes release inflammatory cytokines that activates STAT3 signaling, NYT-induced inhibition of STAT3 phosphorylation might be the reduction of inflammation by protection from adipose tissue reduction. Indeed, it has been reported that increased inflammatory cytokines, such as IL-6, might be involved in the enhanced phosphorylation of STAT3 in muscle tissue of cancer cachexia model (Bonetto et al., 2011). It is reported that NYT ameliorates chronic inflammation in chronic kidney disease (Hsiao et al., 2015). These reports support our hypothesis that NYT inhibits the inflammation in the adipose tissue of tumor-bearing mice.

The present study indicated the ameliorative effect of NYT on cancer-induced sarcopenia. As summarized in Figure 6, cancer cells produce an unknown factor that induces reduction of adipose tissue. Such alterations in adipose tissue induce skeletal muscle insulin resistance through the stimulation of STAT3 signaling, followed by the activation of AMPK. Activation of AMPK reduces overall contents of essential amino acids in the skeletal muscle through the inhibition of mTOR-4E-BP1 signaling. Daily treatment with NYT protects the adipocytes, followed by the reduction of STAT3 and AMPK signaling. This NYT-induced protection might be involved in the amelioration of muscle atrophy in cancer cachexia model. This effect of NYT might be because of the improvement of alterations of anabolism and catabolism in the skeletal muscle cells. NYT might improve the capacity of amino acid storage in the skeletal muscle. 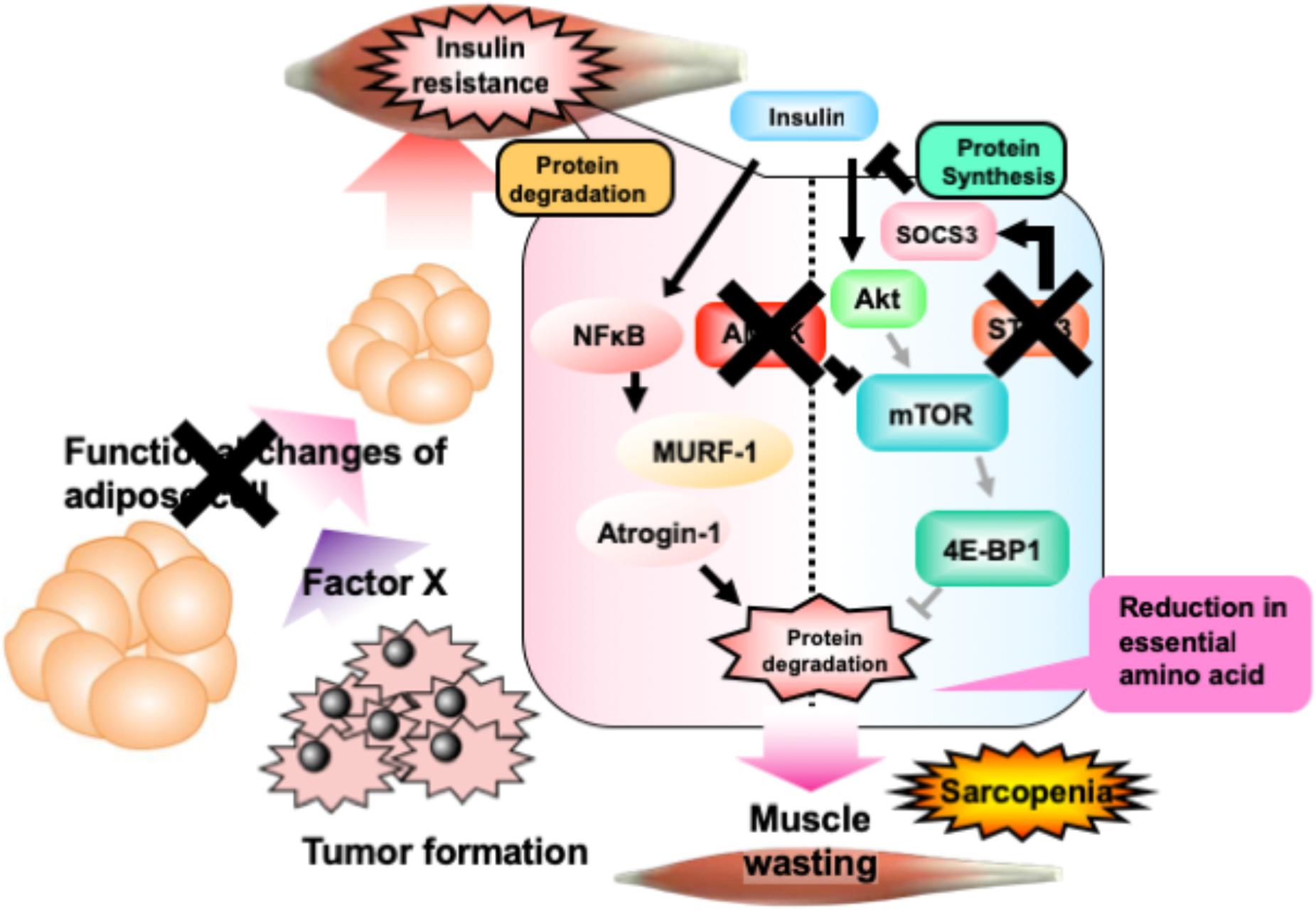 This work was supported by Kracie Pharma, Ltd. (Tokyo, Japan).

Copyright © 2018 Ohsawa, Maruoka, Inami, Iwaki, Murakami and Ishikura. This is an open-access article distributed under the terms of the Creative Commons Attribution License (CC BY). The use, distribution or reproduction in other forums is permitted, provided the original author(s) and the copyright owner(s) are credited and that the original publication in this journal is cited, in accordance with accepted academic practice. No use, distribution or reproduction is permitted which does not comply with these terms.

Frailty and Herbal Medicines- From Molecular Mechanisms to Clinical Efficacy