Background: Right ventricle (RV) function is among the most important prognostic factors for pulmonary arterial hypertension (PAH) patients. Inhaled iloprost, an inhaled member of the prostacyclin family, is effective for the treatment of severe PAH and acute RV failure. However, the acute effects of iloprost on RV physiology have not been thoroughly explored in the past.

Parenteral prostacyclin has been repeatedly shown to improve functional state, exercise capacity and outcome in pulmonary arterial hypertension (PAH) and is currently recommended upfront in PAH patients in WHO functional class III and may be considered in WHO functional class IV (Galiè et al., 2015). Inhaled iloprost, a member of the prostacyclin family, is effective for the treatment of severe pulmonary hypertension (Olschewski et al., 2002) and acute right ventricular (RV) failure (Martischnig et al., 2011). It is also used for acute pulmonary vasodilator testing (Jing et al., 2009). Acute iloprost inhalation could lower mean pulmonary artery pressure (Ivy et al., 2008) and pulmonary vascular resistance (PVR) (Martischnig et al., 2011). However, compared with the knowledge on pulmonary artery hemodynamic changes, RV physiological changes during acute iloprost inhalation were much less known. In 1999, McLaughlin and Rich reported on major increases in cardiac output in PAH patients treated with intravenous epoprostenol and thought that this was explained by the direct positive inotropic effects on the RV added to the decreased PVR (Rich and McLaughlin, 1999). The positive inotropic effects of iloprost have been reported in animal studies (Rex et al., 2008; Gomez-Arroyo et al., 2015).

Cardiovascular magnetic resonance imaging (CMR) is accurate and reproducible in the assessment of RV morphology and function. Many CMR studies have shown that decreased RV function and increased RV volume were predictive of poor outcome (van de Veerdonk et al., 2011, 2017; Baggen et al., 2016; Brewis et al., 2016; Vonk Noordegraaf et al., 2017). So far, we did not find any study using CMR to evaluate the acute effect of iloprost on RV.

The present study investigated the effects of acute iloprost inhalation on RV in PAH patients using right heart catheterization (RHC) and CMR. Furthermore, the relationship between PVR reduction and RV function improvement during this procedure was explored.

Eighty patients gave informed written consent to this study, which was approved by the University of Tianjin Institutional Review Board (Ethical No. 200820). They were referred to the Tianjin Medical University General Hospital, Tianjin, China or FuWai Hospital, Chinese Academy of Medical Science, Beijing, China for diagnostic workup of PAH. A diagnosis of PAH was established in agreement with RHC demonstrating a mean pulmonary artery pressure (mPAP) > 25 mmHg, a pulmonary artery wedge pressure (PAWP) < 15 mmHg and a PVR > 3 Wood units in the absence of identifiable causal cardiac or respiratory conditions or thromboembolism. Six patients without given contrast injection during CMR examination were excluded from this study, since they were either allergic to contrast agent or had renal insufficiency. Three more patients were excluded because their diagnosis was updated to chronic thromboembolic pulmonary hypertension (CTEPH) according to their latest exams, such as ventilation/perfusion scan and pulmonary angiography. The time interval between CMR and RHC was less than a week. RHC and CMR measurements were performed both at baseline and after iloprost inhalation (Ventavis®; Bayer-Schering Pharma, Berlin, Germany). Iloprost was diluted with saline to a concentration of 10 μg per milliliter, and 2 ml was added to a PARI LC STAR nebulizer (PARI GmbH, Starnberg, Germany). The nebulizer was driven by a PARI TurboBOY-N compressor (PARI GmbH, Starnberg, Germany) for 15–20 min, to achieve a total dose of 5 μg iloprost into pulmonary alveoli of the patients (Jing et al., 2009).

Right heart catheterization was performed using a multipurpose catheter (Cordis; Miami Lakes, FL, United States) for the measurements of right atrial pressure (RAP), PAP, PAWP, RV pressure. Cardiac output (CO) was calculated with the Fick principle. The patients were supine and the zero was leveled at mid-chest. Pressures were measured at end-expiration. A femoral artery catheter was also placed for the measurements of systemic arterial pressure (SAP). Blood samples were drawn from the pulmonary and systemic artery catheters for measurements of mixed venous and arterial oxygen saturations (SvO2 and SaO2, respectively). PVR was calculated as (mPAP – PAWP)/CO.

Phase-contrast MR sequences were used to measure the pulmonary artery flow and the AW 4.3 work station was used for analysis. CMR-derived indices of pulmonary vascular function include: (1) pulsatility, defined as the relative change in pulmonary artery lumen area (PA) during the cardiac cycle, or (PAmax-PAmin)/PAmin; (2) capacitance, defined as the change in volume per change in PA, or SV/(PAmax-PAmin); (3) stiffness index β, calculated from the formula: ln [sPAP/dPAP/PA pulsatility] (Sanz et al., 2009).

All statistical analyses were performed using SPSS v20 (SPSS, Chicago, IL, United States) and Graph Pad Prism 5.03 (Graph Pad Software, San Diego, CA, United States). The data were presented as mean ± SD unless explicitly stated otherwise. The quantitative characteristics between the two groups were compared by t-test or Mann–Whitney U test. Paired sample t-test or Wilcoxon signed-rank test were used to assess the difference between hemodynamic or CMR parameters at baseline and after iloprost inhalation. Linear regression analysis was used to examine the association between the right ventricular functional changes and PVR changes. A P value of < 0.05 was considered significant. 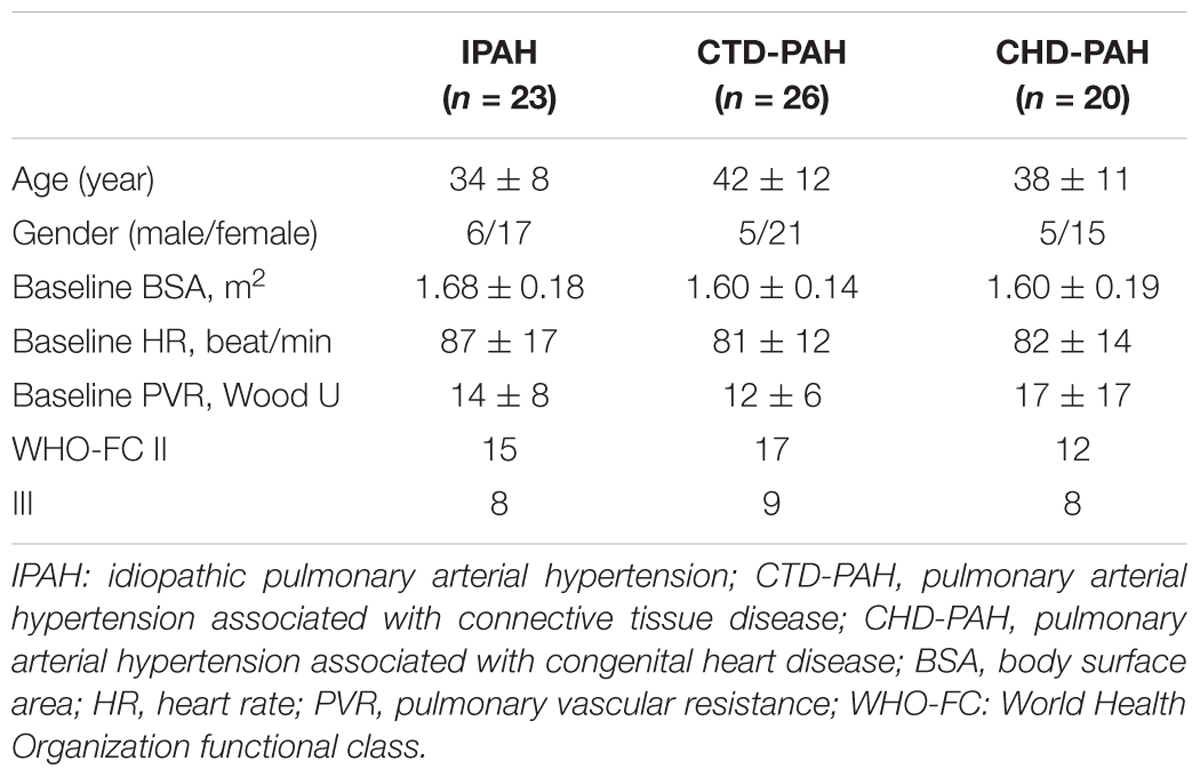 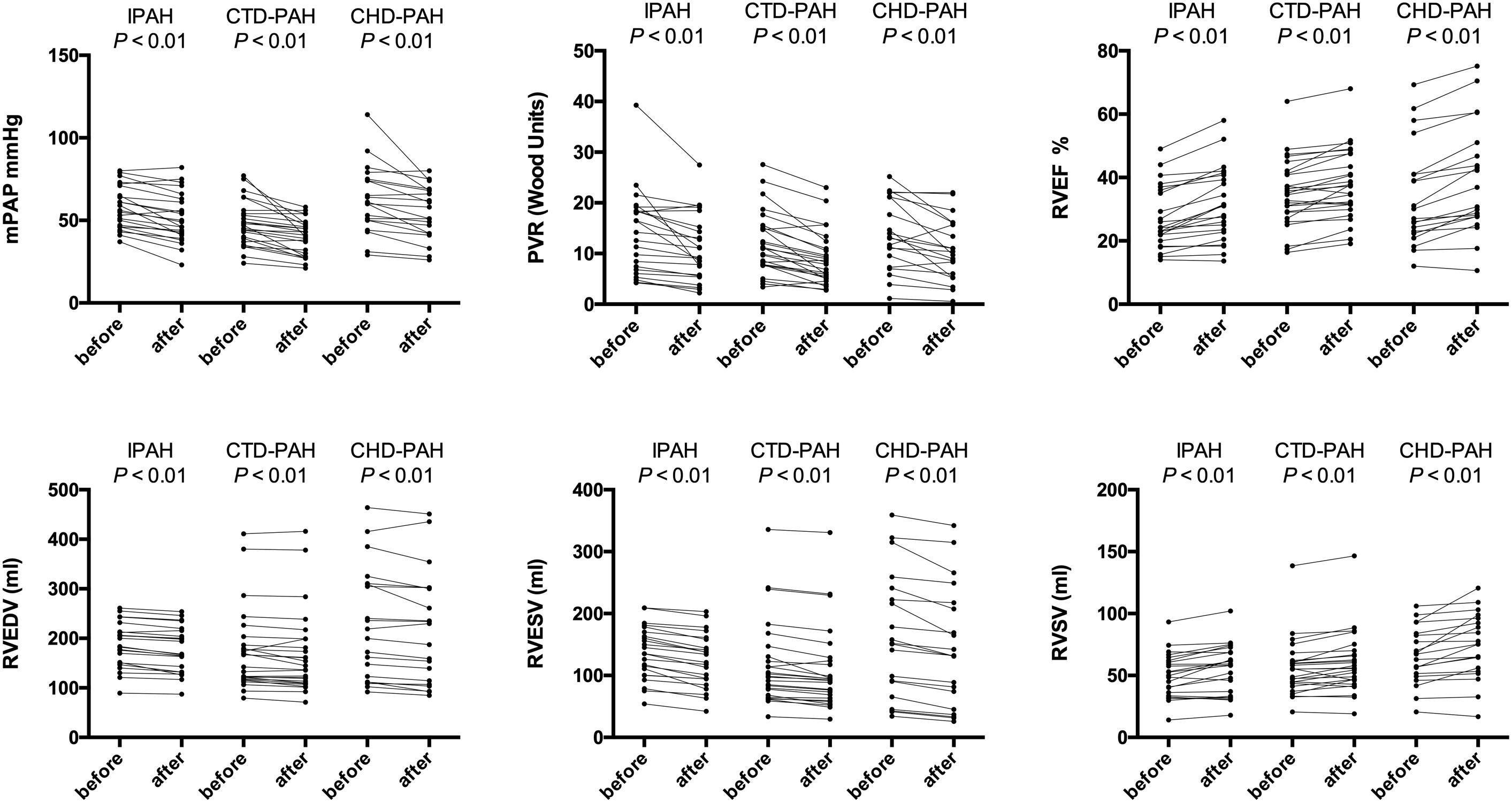 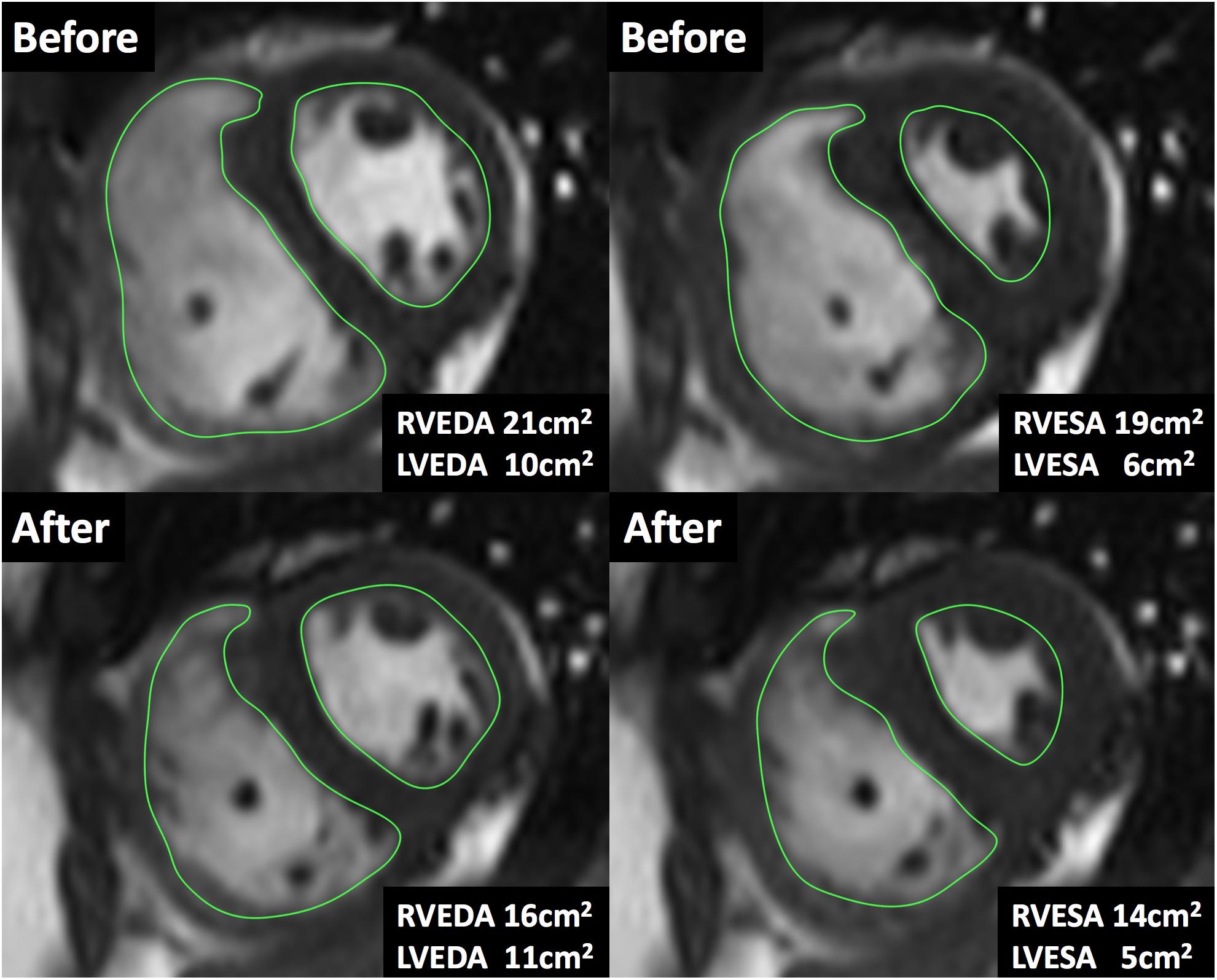 To explore the relationship between RV afterload relief and RV function improvement, the correlation between PVR reduction and RVEF changes was analyzed.

Neither was the association between the PVR and RVEF changes in CHD-PAH found. The potential cause of interference here could be intra-cardiac or patent ductus arteriosus shunt.

The present results suggest that acutely inhaled iloprost improves RV function, in terms of RV volumes, RVEF and RV stroke volume in patients with IPAH and CTD-PAH. This knowledge is important for understanding the clinical pharmacology of iloprost for the treatment of PAH, especially on RV. This improvement of RV function would be largely explained by a reduction of afterload by iloprost. However, further analysis found PVR reduction might not guarantee RVEF improvement in some patients, especially in the CTD-PAH group. This observation could suggest more therapies on RV function in these patients.

In the present study, acute iloprost inhalation decreased PVR, increased RVEF and reduced RV volume. This was consistent with previous work on animals (Rex et al., 2008). In another short-term study, after 2 weeks of iloprost inhalation, the cardiac output and tricuspid annulus plane systolic excursion were significantly increased in a rat PAH model (Gomez-Arroyo et al., 2015). Furthermore, there was an increase in LVEF, which could not be fully explained by a decreased afterload, since mean arterial pressure was unchanged. This observation could suggest a component of prostacyclin-induced positive inotropism. The effects of prostacyclin on in vitro myocardial tissue preparations and animal models have been reported to be variable with no changes (Metsä-Ketelä, 1981; Wauthy et al., 2003; Holmboe et al., 2017), decreases (Karmazyn, 1986), or, more often, increases in contractility (Fassina et al., 1983; Siegl and Wenger, 1985; Kemming et al., 2005; Holmboe et al., 2013). However, based on the current data, it was not possible to determine whether the inotropic effect was direct or mediated by other mechanisms, such as systemic vasodilation or restoration of LV preload due to RV pressure reduction.

In addition, we found that RVEF improvement was proportional to PVR reduction induced by iloprost in IPAH patients but not in CTD-PAH and CHD-PAH patients. This may be explained by the fact that RV dysfunction in IPAH patients was secondary to pulmonary hypertension, while RV myocardium damage could be the result of direct infiltration of systemic inflammation in CTD-PAH patients. In addition, we observed that there were more patients with positive RV-LGE in CTD-PAH than in the IPAH group. IPAH patients with positive RV-LGE tend to have less improvement of RV function after PVR reduction by iloprost. RV-LGE could indicate myocardial cell disarray or fibrosis (Freed et al., 2012), and local LGE mass at the anterior septal insertion is reported to be associated with reduced regional longitudinal contractility at the base (Shehata et al., 2011). This could be another potential explanation for why RV function and PVR changes lost linear relationship in CTD-PAH patients. Originally, one would expect little or no response to iloprost inhalation in CHD-PAH patients. However, in this study we found mPAP was significantly reduced in some CHD-PAH patients. This is consistent with a previous study from the TOPP registry, which found 7–36% of CHD-PAH patients were acute vasodilator responders, according to different criteria (Douwes et al., 2016). Our hypothesis for this phenomenon was that vasoconstriction or spasm of pulmonary arteries existed in these patients, especially in those hospitalized patients. This could be partially corroborated by the observation that there was significant mPAP reduction in many CHD-PAH patients due to merely a sedative effect during perioperative anesthesia.

More interestingly, our present study is in line with a long-term study on the relationship between PVR and RVEF changes. Drs. van de Veerdonk and Vonk-Noordegraaf found the relative change in PVR was significantly correlated to the absolute change in RVEF after combination therapy. In contrast, they did not find a significant correlation between the change in PVR and RVEF after monotherapy (van de Veerdonk et al., 2017). The damage of linear relationships between the changes in PVR and RVEF may indicate the irreversibility of RV dysfunction, especially when treatment was insufficient. Whether the relationship between the changes of RVEF and PVR during acute iloprost inhalation could predict long-term effects of PAH-targeted therapy, remains further study.

Finally, it is of interest that the measures of PA stiffness were not affected by inhaled iloprost in the present study. This may be explained by the fact that proximal pulmonary arterial compliance as measured by CMR does not account for more than 20% of total compliance as pulmonary vessel distensibility is distributed to the entire pulmonary vascular tree (Saouti et al., 2009). Interventions that decrease PVR and increase compliance in PAH may not necessarily be associated with significant changes in proximal pulmonary arterial stiffness.

There were several limitations in this study. To capture the minor changes induced by acute iloprost inhalation, we relied on the analysis of CMR images. It is possible that the tracings of RV contour may have been different among individual operators. However, the primary data were all analyzed by two experienced radiologists and the blinded review found minimal inter-observer error on random cases. Secondly, it is always recommended to collect the CMR and RHC data simultaneously, however it is impractical in our centers. The time interval was limited to within a week in order to make sure the heart rate, hemodynamics, symptoms and treatment were stable during this time. Lastly, as this is an acute drug effect study, long-term follow-up data would be needed for enhancing clinical value.

In conclusion, the clinical importance of this study is to provide a detailed knowledge of how RV physiology is changed during acute iloprost inhalation, by combining hemodynamic assessment and CMR imaging. It was observed that RVEF improvements are proportional to PVR reduction in IPAH patients. In contrast, for CTD-PAH and CHD-PAH patients, PVR and RVEF changes are not correlated with each other. For these patients, a modest decline of PVR would mean little to RVEF improvement, thus more effective treatment may be suggested; this may be the potential clinical value of the present study.

We thank Drs. Xin-Xin Yan and Fu-Hua Peng for helping to recruit patients.

Copyright © 2019 Li, Zhang, Wang, Lu, Li, Lian, Lv, Jiang, Wu, Ye, Zhao and Yang. This is an open-access article distributed under the terms of the Creative Commons Attribution License (CC BY). The use, distribution or reproduction in other forums is permitted, provided the original author(s) and the copyright owner(s) are credited and that the original publication in this journal is cited, in accordance with accepted academic practice. No use, distribution or reproduction is permitted which does not comply with these terms.