Efficacy and Safety of Avatrombopag in Patients With Thrombocytopenia: A Systematic Review and Meta-Analysis of Randomized Controlled Trials

Methods: Databases including Medline, PubMed, Embase, the Cochrane Library and ClinicalTrials.gov were searched for randomized controlled trials that compared avatrombopag with placebo in patients with thrombocytopenia. The deadline was March 2019.

Conclusions: This meta-analysis showed that avatrombopag was an effective treatment for thrombocytopenia, but there is sufficient evidence to indicate that adverse events may occur.

Thrombocytopenia is defined as a platelet below 150 × 109/L, a platelet count between 70 × 109/L and 150 × 109/L is considered mild thrombocytopenia, and a count below 50 × 109/L is considered severe thrombocytopenia. Most individuals are asymptomatic if their platelet count is 50 × 109/L or higher (Gauer and Braun, 2012). Patients with a platelet count below 50 × 109/L are more prone to spontaneous bleeding (i.e., mucosal, gastrointestinal, genitourinary, and intracranial bleeding), which is considered as a hematologic emergency (Stasi, 2012; Gado and Domjan, 2014). There are several causes of thrombocytopenia, including infection, malignancy, autoimmune disease, liver disease, disseminated intravascular coagulation, drugs, pregnancy, and coagulopathy (Smock and Perkins, 2014). Among these, severe thrombocytopenia may be associated with severe mortality, cancer, immune thrombocytopenic purpura (ITP) (Lambert and Gernsheimer, 2017), chronic liver disease (CLD) (Giannini et al., 2003), chronic hepatitis C virus (HCV) (Dienstag and McHutchison, 2006), and other diseases. Fundamental ITP is an acquired immune-mediated disease was characterized by autoantibody-mediated platelet destruction and impaired platelet production. Generally, these dual effects lead to severe thrombocytopenia and bleeding tendency, with associated morbidity and mortality (Bussel et al., 2014; Taylor et al., 2017). Between 2 and 4 out of 100,000 adults develop ITP, which results in bleeding symptoms and thrombocytopenia. Female adolescents are more susceptible to ITP than males (Lambert and Gernsheimer, 2017). A study conducted in Denmark reported that patients with ITP had a 1.5-fold higher mortality and a significantly increased risk of bleeding, hematologic malignancy, and infection (RR: 2.4, 5.7, and 6.2, respectively). In addition, demographic studies have shown higher mortality in patients with ITP than in the general population and that mortality risk may be associated with disease severity (Frederiksen et al., 2014). Thrombocytopenia is a common complication of patients with CLD, and occurs in up to 76% of patients with cirrhosis (Lu et al., 2006). Traditional therapies for thrombocytopenia seek to reduce platelet destruction or transfuse platelets. However, these choices are not always effective and may result in severe side effects (Portielje et al., 2001). For example, although splenectomy is effective in quite a few patients with thrombocytopenia, the risks of the operation itself and the various postoperative complications, such as severe sepsis, cannot be ignored (George, 2006). Platelet transfusion may cause immune responses (fever, allergy, and hemolysis) and non-immune responses (circulatory overload and bacterial contamination) (Li and Zheng, 2014). Thus, in contrast with mature therapies that attach importance to reducing platelet destruction and transfusing platelets, the stimulation of platelet formation is a newer approach (Siegal et al., 2013).

Although platelet development has been shown to be regulated by many growth factors and cytokines, thrombopoietin (TPO) was found to be a major physiological regulator of platelet production (Kaushansky and Drachman, 2002). TPO is a hormone produced by the liver and secreted into the peripheral circulation system. It binds to, and activates, TPO receptors (c-Mpl) and specifically promotes platelet production (Kaushansky, 2005). In recent years, many screening methods have been developed to identify significant molecules that can imitate the function of hematopoietic growth factors. The potential advantages of these molecule mimetics include their hypothetical lack of immunogenicity and low cost (Fukushima-Shintani et al., 2009). For TPO, several small-molecule compounds have been reported to imitate the role of TPO through TPO receptors (Kuter, 2007). The TPO receptor agonist (TPO-RA) acts as an earlier recombinant thrombopoietin and will increase the platelet count and decrease the need for platelet transfusions (Kuter, 2013). The current response rates to TPO-RA in children are comparable to those for intravenous immunoglobulin, and it has been well tolerated with minor side effects. TPO-RA directly targets thrombocytopenia and has few off-target effects. However, they are representative of the paradigm shift in ITP treatment: TPO-RA does not have immunosuppressive effects and therefore avoids the side effects of traditional immunosuppressive therapies. Overall, TPO-RA represents a new and effective alternative therapy for thrombocytopenia (Garzon and Mitchell, 2015).

Two TPO-RAs, eltrombopag and romiplostim, have been approved for the treatment of thrombocytopenia. Both are effective, but increased the risk of thrombosis (Nguyen et al., 2015). Currently, in the United States, romiplostim must be administered subcutaneously by health care professionals, and patients receiving eltrombopag must adhere to dietary restrictions (US FDA, 2008; US FDA, 2014). Avatrombopag (AKR 501, YM477, AS1670542, E5501) belongs to the second generation of new oral non-peptide TPO-RAs and imitates the function of TPO in vitro and in vivo. Avatrombopag increased platelet count in animals and human volunteers (Fukushima-Shintani et al., 2009). The US Food and Drug Administration (FDA) approved Doptelet® (avatrombopag tablet) on May 21, 2018, for the treatment of other thrombocytopenia disorders, including ITP and CLD-induced thrombocytopenia (Neunert et al., 2011). There is currently no comprehensive analysis of the efficacy and safety of avatrombopag in patients with thrombocytopenia. In this study, a computer-based search was used to retrieve randomized, double-blind clinical trials involving patients with thrombocytopenia and the relevant data were extracted to permit an evidence-based medical meta-analysis of the efficacy and safety of avatrombopag in thrombocytopenia.

According to the requirements of Preferred Reporting Items for Systematic Reviews and Meta-Analyses (PRISMA) statement (Liberati et al., 2009), and Cochrane Handbook for Interventional Systematic Reviews (Higgins and Green, 2011), databases including Medline, PubMed, Embase, the Cochrane Library, and ClinicalTrials.gov were searched. Search terms and MeSH were “thrombocytopenia,” “avatrombopag,” “E5501,” “AKR-501,” “YM477,” and “AS1670542.” We registered this review in the PROSPERO (registration number: CRD42018102888).

The titles and abstracts of all searched records were independently screened by two authors (CL and XL) independently to determine potentially eligible studies. Subsequently, eligible studies were identified after screening the full text of the article. The following records were excluded: reviews, case reports, non-clinical studies, and irrelevant data. When the two authors’ opinions were contradictory, a third author was included in the discussion to aid resolution.

According to the diagnostic criteria of WHO, trials including the administration of avatrombopag to patients with thrombocytopenia were included if they met the following criteria: 1) Research design: randomized, double-blind, controlled trials and all trials comparing the effectiveness and side effects of thrombocytopenia with avatrombopag, placebo, or no treatment for thrombocytopenia were eligible. 2) Patients: a) male or female patients older than 18 years without thrombosis and cardiovascular disease; b) mean baseline platelet count of patients less than 50 × 109/L or platelet count between 20 × 109/L and 70 × 109/L. 3) Interventions: oral administration of avatrombopag alone. 4) Outcome measures: we pre-specified four outcomes, numbers of patients achieved platelet response (PR), mean platelet count change, adverse events (AEs), serious adverse serious adverse events (SAEs), and deaths: a) PR (platelet count ≥ 50 × 109/L) is the primary outcome; b) PR (platelet count ≥ 100 × 109/L), mean platelet count change, AEs (including abdominal pain, pyrexia, headache, nausea, fatigue, and peripheral edema), SAEs (including thrombosis, acute myocardial infarction, and hypotension), and deaths. Trials were excluded for the following reasons: 1) document type setting (reviews, meeting summaries, letters, etc.), 2) the information on the trial was missing or incomplete, and 3) the method of random sequence generation was not mentioned.

Evidence quality assessment was performed separately for each outcome. The GRADE system defines the quality of evidence as “high,” “moderate,” “low,” or “very low.” If the opinion of the two authors differed, the contradiction was resolved through discussion. 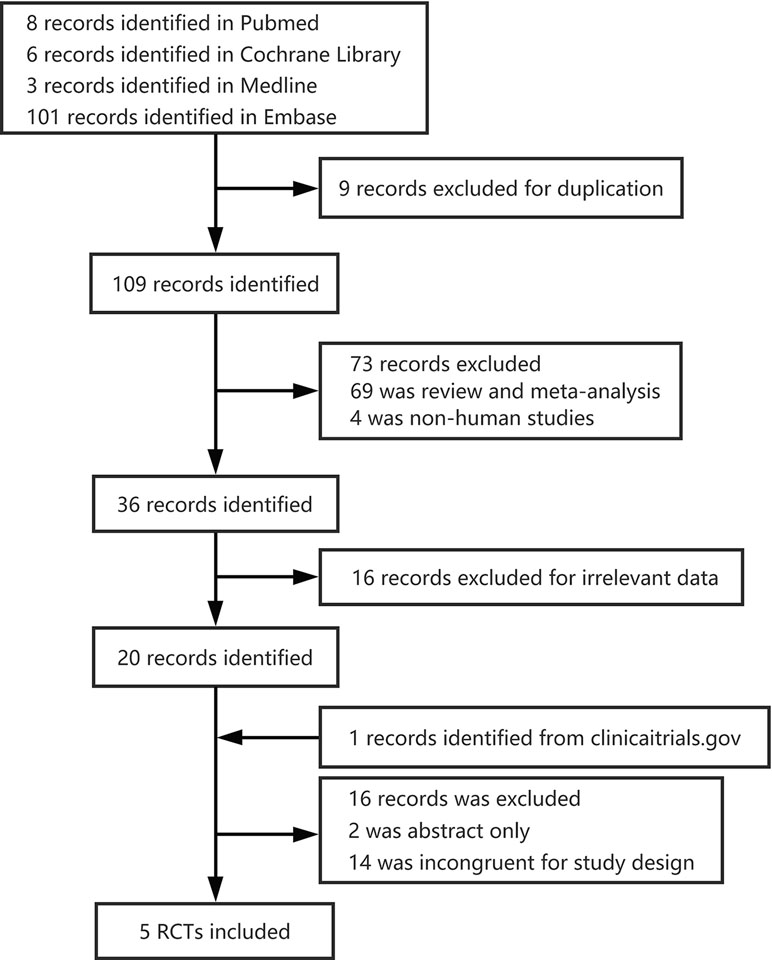 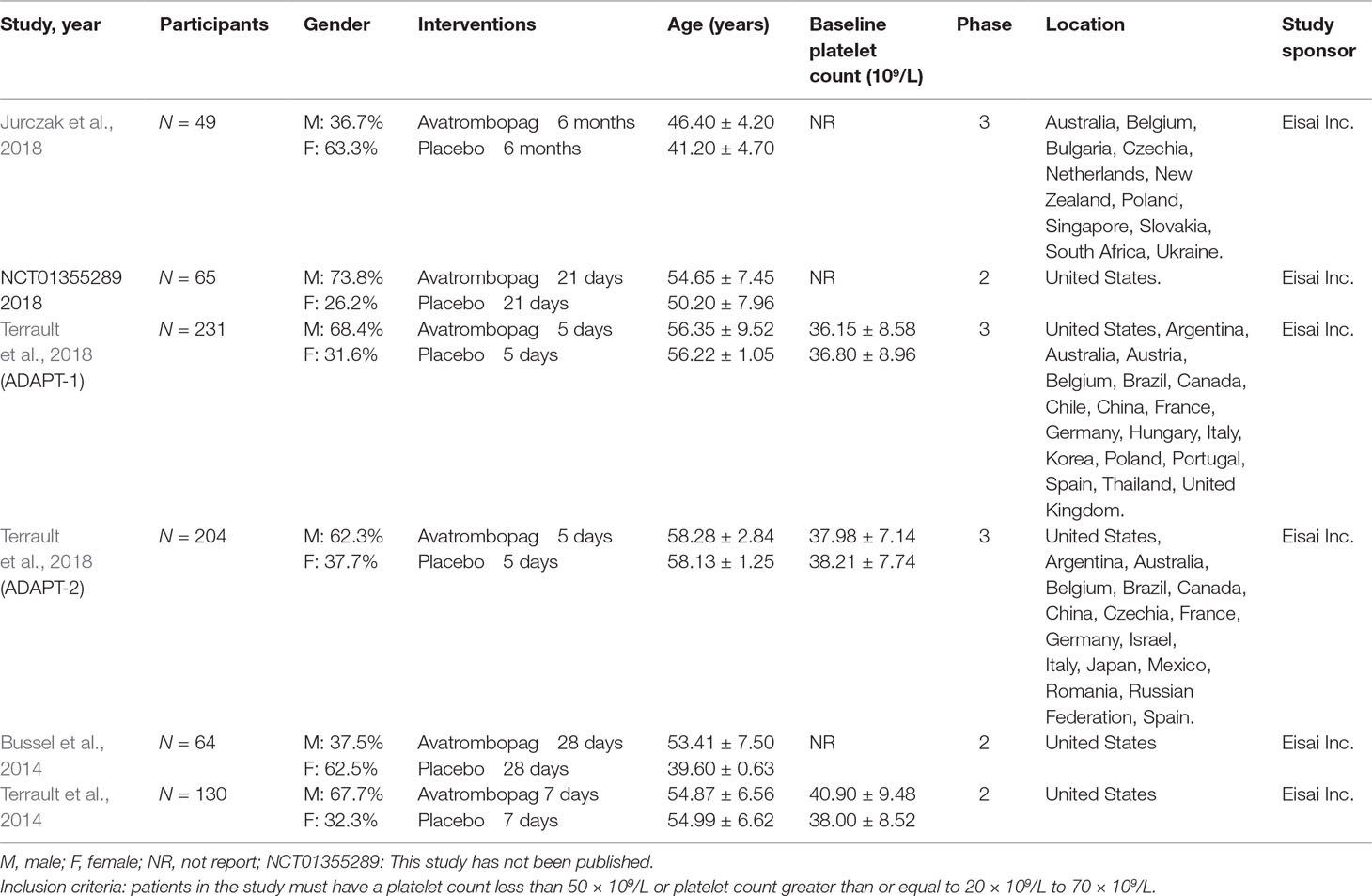 Although the RCTs were small, they were judged to be of high quality (Figures 2 and 3). The generation of random sequences was described in detail for all RCTs, and the method of allocation concealment was described in three RCTs. The blinding was at a low risk of bias. All trials were sponsored by Eisai Inc. (New Jersey, United States). We strongly suspected the credibility. However, after comparing the outcomes pre-specified in the protocols and those reported, we judged that selective reporting was at low risk of bias. 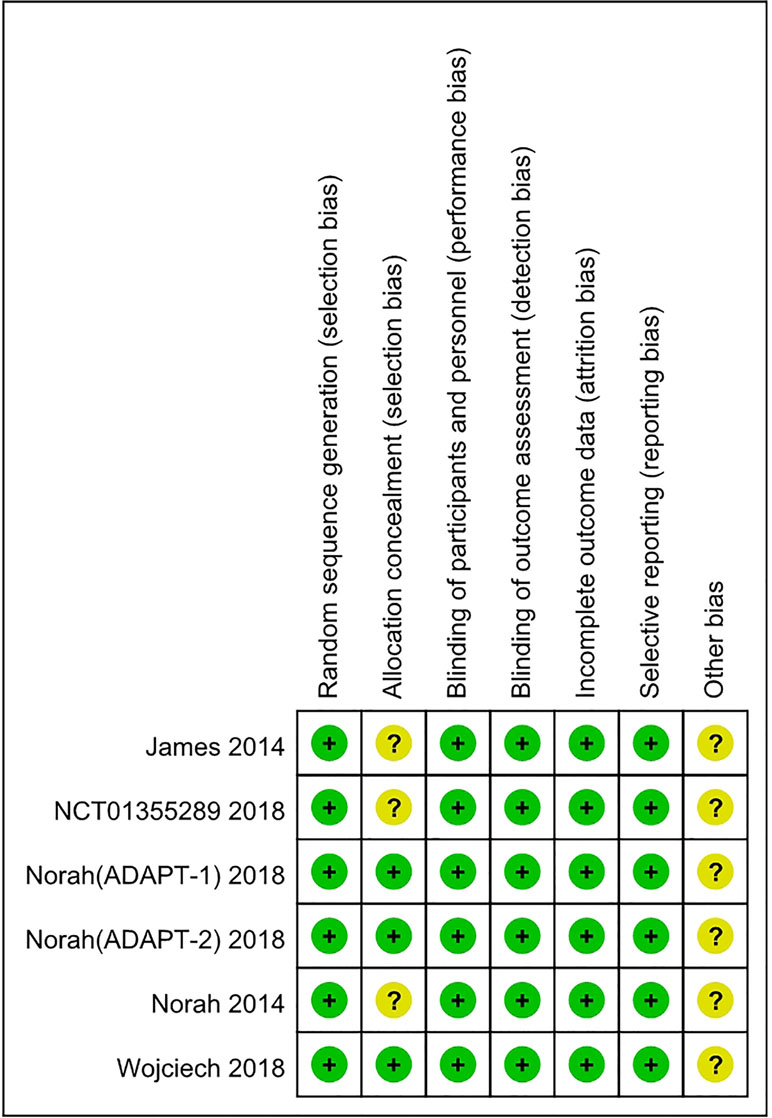 Figure 4 Forest plot: The number of patients who achieved PR ≥ 50 × 109/L for avatrombopag versus placebo from the meta-analysis.

Figure 5 Forest plot: The number of patients who achieved PR ≥ 100 × 109/L with avatrombopag treatment versus placebo from the meta-analysis.

Change in Platelet Count From Baseline

Figure 6 Forest plot: Effects of avatrombopag and placebo on platelet count change from the baseline from the meta-analysis.

Figure 7 Forest plot: Effects of avatrombopag and placebo on platelet count in the presence of different comorbidities.

Figure 8 Forest plot: The incidence of serious adverse events (SAEs) after avatrombopag and placebo treatment from the meta-analysis.

Figure 9 Forest plot: The incidence of deaths after avatrombopag and placebo treatment from the meta-analysis.

Figure 10 Forest plot: The incidence of other AEs after avatrombopag and placebo treatment from the meta-analysis.

A GRADE evidence profile was created to evaluate the quality of evidence for the key outcomes (Table 2). For most outcomes, we downgraded the imprecision by one because the 95% CIs were wide and there were less than 300 samples in total. The GRADE results showed that the evidence was “low” for most outcomes and “moderate” for a few outcomes. 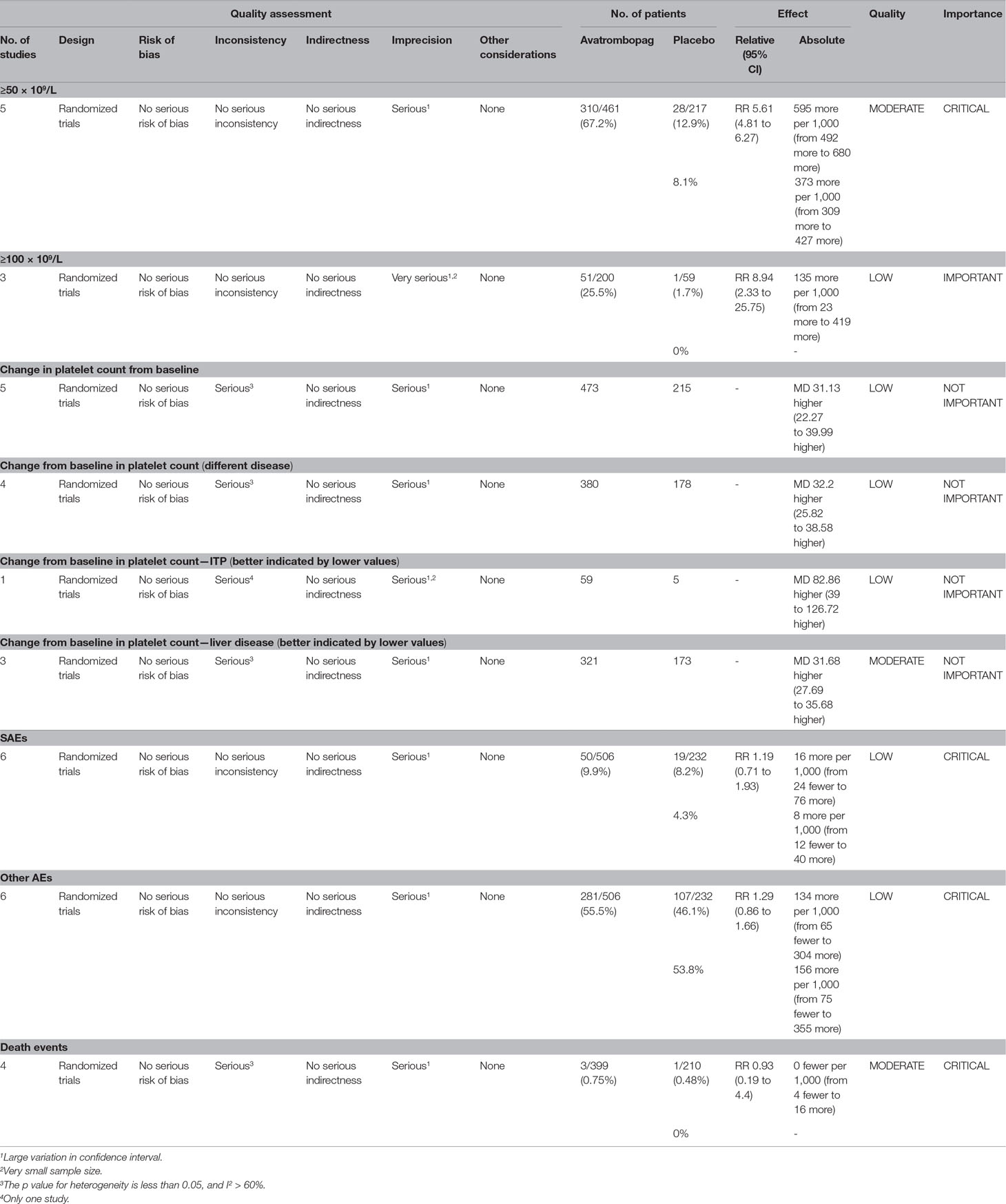 Table 2 GRADE assessment of the quality of the included studies.

Our results show that avatrombopag is effective for the treatment of thrombocytopenia. Avatrombopag significantly improves overall PR and platelet count. To increase peripheral blood platelet count to normal levels is the main goal of treatment for thrombocytopenia (Lo and Deane, 2014). Platelet response is the primary outcome measure, which is defined as the number of patients who achieve a platelet count of ≥50 × 109/L (Newland et al., 2016). We also included the outcome measure of the patients who achieved a platelet count ≥100 × 109/L. The meta-analysis results showed that more patients treated with avatrombopag achieved platelet than those treated with placebo. The platelet counts of patients treated with avatrombopag showed a greater change from baseline than in patients treated with the placebo. However, owing to the high heterogeneity, we performed a subgroup analysis and removed two trials; consequently, the heterogeneity decreased to 27%. We believed that the high heterogeneity occurred because the therapeutic effect of avatrombopag on thrombocytopenia caused by different types of diseases was varied. ITP is an autoimmune disorder characterized by persistent thrombocytopenia due to the binding of autoantibody to platelets (British Committee for Standards in Haematology General Haematology Task Force, 2003). The main mechanism of thrombocytopenia in liver diseases is the retention of platelets in the spleen and the decrease of TPO in the liver Samuel et al., (2016). Therefore, for thrombocytopenia arising from different disease backgrounds, the effects should be analyzed separately. However, we cannot obtain more reliable results because the trials included in this study were small.

This meta-analysis showed that avatrombopag is an effective treatment for thrombocytopenia, but there are sufficient evidences to demonstrate that its use may cause adverse events.

Publicly available datasets were analyzed in this study. This data can be found here: https://www.ncbi.nlm.nih.gov/pubmed

The authors are thankful to Yueshan Sun for assistance with the literature search. We wish to thank Xinrui Jiang for assistance to modify the format. We also thank Yaqi Kang and Xin Sheng for valuable advice.

Copyright © 2019 Li, Li, Huang, Yang, Wu, Wang, Qin, Zou and Wu. This is an open-access article distributed under the terms of the Creative Commons Attribution License (CC BY). The use, distribution or reproduction in other forums is permitted, provided the original author(s) and the copyright owner(s) are credited and that the original publication in this journal is cited, in accordance with accepted academic practice. No use, distribution or reproduction is permitted which does not comply with these terms.