Cardiovascular diseases (CVDs) such as angina, hypertension, myocardial ischemia, and heart failure are the leading causes of morbidity and mortality worldwide. One of the major transcription factors widely associated with CVDs is nuclear factor-kappa B (NFκB). NFκB activation initiates the canonical and non-conical pathways that promotes activation of transcription factors leading to inflammation, such as leukocyte adhesion molecules, cytokines, and chemokines. Flavonoids are bioactive polyphenolic compounds found abundantly in various fruits, vegetables, beverages (tea, coffee), nuts, and cereal products with cardiovascular protective properties. Flavonoids can be classified into six subgroups based on their chemical structures: flavanones, flavones, flavonols, flavan-3-ols, isoflavones, and anthocyanidins. As NFκB inhibitors, these flavonoids may modulate the expression of pro-inflammatory genes leading to the attenuation of the inflammatory responses underlying various cardiovascular pathology. This review presents an update on the anti-inflammatory actions of flavonoids via inhibition of NFκB mechanism supporting the therapeutic potential of these natural compounds in various CVDs.

Flavonoids are plant polyphenolic compound derivatives from natural origin found in fruits, grains, vegetables, roots, bark, flowers, stems, tea, and wine (Zeinali et al., 2017). Non-plant natural products such as mushrooms and honey, plant extracts, plant juices, plant powders, and essential oils have shown to possess anti-inflammatory activities and many of these plant natural products have polyphenols as their major compound (Khalil and Sulaiman, 2010; Azab et al., 2016). However, the protective effects of flavonoid in CVDs via inhibition of NFκB are yet to be reviewed. Therefore, in this mini-review, we focused on the anti-inflammatory actions of flavonoids via inhibition of NFκB mechanism in CVDs.

Flavonoids and Its Subclass

Flavanones widely present in all citrus fruits, which gives the bitter taste of the juice and its peel. Oranges, lemons, and grapes are rich sources of flavanones and major compounds are hesperitin, naringenin, and eriodictyol (Barreca et al., 2017).

Isoflavones are unique in that they resemble estrogen in structure and, therefore, are classified as phytoestrogens. There are found abundantly in soy products such as tofu, roasted soy nuts, and miso (Marzocchella et al., 2011).

There are a few cellular redox pathways involved in the development of the chronic inflammatory CVD, which includes NFκB. NFκB is a transcription factor that activates inhibitor of kappa B (IκB) kinase in the cytosol upon being stimulated by inflammatory stimuli (Brasier, 2010). Subsequent signaling pathways via canonical or non-canonical lead to migration of NFκB toward the nucleus and hence initiates the targeting gene such as pro-inflammatory cells, monocytes, macrophages, and T and B cells (Figure 1). 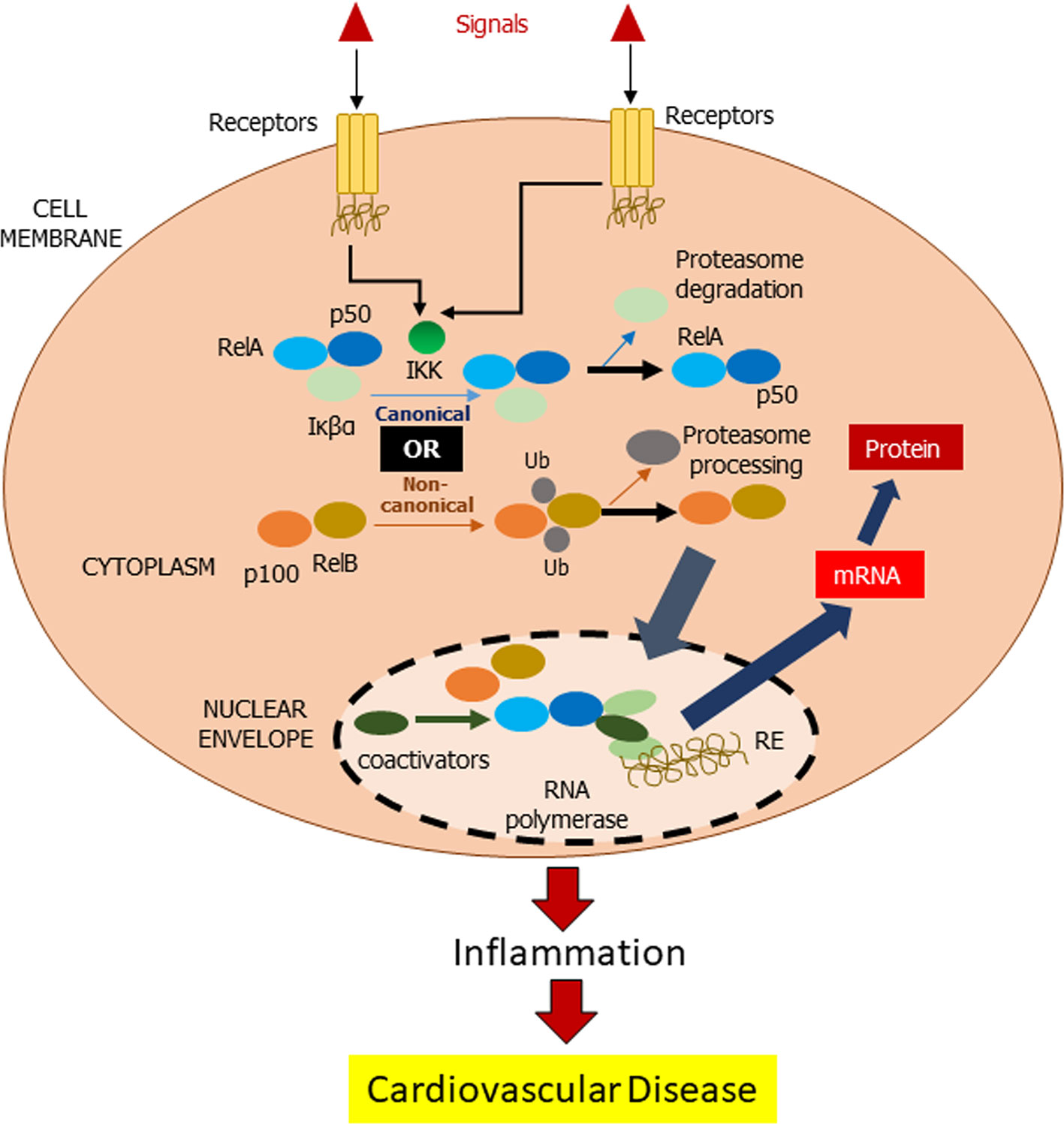 Figure 1 Mechanism of NFκB action. In inactivated state, NF-κβ, which consists of Rel and p50 proteins, is located in the cytosol complexed with the inhibitory protein Iκβα. IκB kinase (IKK) is activated by extracellular signals via membrane receptors. Subsequently, IKK phosphorylates the Iκβα protein resulting in ubiquitination of Iκβα and eventually by the proteasome for Iκβα degradation (canonical pathway). In non-canonical pathway, RelB favors the activation of NF-κβ via RelB. Activated NF-κβ is further translocated into the nucleus for DNA bindings, called response elements (RE). The DNA/NF-κβ complex attracts coactivators and RNA polymerase, which transcribe the DNA into mRNA resulting in a cell transformation.

Quercetin or 3, 3′, 4′, 5, 7-pentahydroxyflvanone that falls into the category of flavonol is widely found in plants such as Ginkgo biloba, Hypericum perforatum, and Sambucus canadensis as well as vegetables such as apples, berries, grapes, onions, shallots, and tomatoes (Li et al., 2016).

Luteolin or 3’, 4’, 5, 7-tetrahydroxyflavone is one of the most prevalent flavones widely found in fruits and vegetables such as carrots, cabbages, parsley, broccoli, celery, and apple skins (Weng and Yen, 2012).

Fisetin or 3, 3c,4c,7-tetrahydroxyflavone is a bioactive molecule found in fruits such as strawberry, apple, persimmon, and grape and vegetables such as onion and cucumber (Arai et al., 2000).

Garg et al. (2019) reported the protective effect of fisetin against isoproterol-induced myocardial injury by suppressing myocardial injury markers, creatine kinase-muscle/brain (CK-MB), lactate dehydrogenase (LDH), and inflammatory markers (TNF-α and IL-6) in the blood serum as well as normalization of histological and ultrastructure of the heart. In addition, fisetin regulated the balance between pro- or anti-oxidants and pro- or anti-apoptotics proteins in the myocardial tissue (Garg et al., 2019). These protective effects of fisetin are attributed to the downregulation of receptor for advanced glycation end products (RAGE) and NFκB (Garg et al., 2019).

Fisetin attenuated the development of diabetic cardiomyopathy by attenuating the expression of myocardial NFκB and the pro-inflammatory cytokines IL-1β, IL-6, and TNF-α in the heart of diabetic rats. These result in reduction of cardiac function markers such as CK-MB, LDH, and cTn as well as normalization heart morphology (Althunibat et al., 2019).

Apigenin, a flavone, is found widely available in fruits and vegetables, such as grapefruits, oranges, celeries, and onions (Ren et al., 2018).

Isoliquiritigenin is extracted from root of licorice and has been used traditionally for the treatment of inflammatory or pulmonary diseases (Peng et al., 2015). In HUVECS exposed to TNF-α, isoliquiritigenin blocked the involvement of NFкB at the transcriptional levels, and thus attenuated the downstream expression of VCAM-1, E-selectin, THP-1 monocyte adhesion, IкB-α, and PECAM-1, suggesting the protective effects of isoliquiritigenin through NFкB-dependent mechanisms (Kwon et al., 2007). In angiotensin II induced hypertension model, isoliquiritigenin attenuated inflammation cytokines including IL-1β and TNF-α, excessive deposition of extracellular matrix, and oxidative stress-induced apoptosis via nuclear factor E2-related factor 2 (Nrf2) and NFκB pathways (Xiong et al., 2018).

Rutin is a flavonol that presents in buckwheat and citrus fruits. In a sodium fluoride-induced hypertensive rats, administration of rutin reduced blood pressure elevation by enhancing NO bioavailability via down-regulation of NFκB expression and up-regulation of Nrf2 (Oyagbemi et al., 2018b).

In high mobility group box 1 (HMGBI)-induced inflammatory response in HUVECs, rutin attenuated NFκB and ERK1/2, which, in turn, reduced IL-6 and TNF-α levels (Yoo et al., 2014). Up-regulation of VCAM-1, intercellular adhesion molecule-1 (ICAM-1), and E-selectin induced by HMGB1 were similarly inhibited by rutin, suggesting that the protective effect of rutin on vascular inflammation is by inhibiting the HMGB1 and NFκB pathways.

In LPS-induced inﬂammation in HUVECs, rutin reversed barrier disruption, expression of cell adhesion molecules, and adhesion and migration of monocytes in endothelial cells. The barrier protective effects of rutin were linked to a down-regulation of TNF-α, deactivation of NFκB, and reduced phosphorylation of IκB-α (Lee et al., 2012).

In a rat model of myocardial infarction, fibrosis in the interstitial and perivascular regions and expression of collagen was reduced following chrysin treatment (Yang et al., 2018). This effect is associated with increased PPAR-γ expression and decreased NFκB expression via inhibition of IκKβ phosphorylation, leading to reduction of matrix metalloproteinase-2 (MMP-2), MMP-9 levels, and suppression of activator protein 1 (AP-1) level.

Silymarin is a flavonolignan extracted from the milk thistle. Silymarin augmented relaxation of pulmonary arteries isolated from a lung ischemia-reperfusion (I/R) injury model (Jin et al., 2016). Vascular protective effect of silymarin is due to inhibition of NFκB, thus suppressing the serum concentration of inflammatory cytokines and reducing protein expression of hypoxia inducible factor-1α (HIF-1α) and iNOS.

Silibinin, a major active constituent of silymarin, was able to reduce the abnormal size of cardiac myocytes and prevent hypertrophy by alleviating the production of epidermal growth factor receptor (EGFR) (Ai et al., 2010). Silibilin exerted its anti-inflammatory effect by suppressing the activation of NFκB stimulated by angiotensin II in cardiac myocytes or in the aortic banding male mice. Furthermore, silibilin interfered with the phosphorylation and degradation of IκB-α and activation of IκKβ in vivo.

Kaempferol (3,4′,5,7-tetrahydroxyflavone) is a flavonol that is present widely in fruits, vegetables, and herbs, including grapes, tomatoes, and tea. In cardiac fibroblasts stimulated with LPS, kaempferol decreased release of pro-inflammatory cytokines by inhibiting AKT phosphorylation and NFκB activation (Tang et al., 2015). In isoprenaline-induced cardiac damage, kaempferol improved the hemodynamic and left ventricular functions in male rats, which abated the increased serum concentration of CK-MB and LDH, preserved the morphology of myocardium, and reduced the levels of pro-inflammatory cytokines (Suchal et al., 2016a). Similarly, kaempferol prevented cardiac damage by inhibiting the protein expression of NFκB, p38, and JNK (Suchal et al., 2016b) suggesting that cardioprotective and anti-inflammatory action of kaempferol was associated with NFκB signaling pathway.

Table 1 summarizes the effects and mechanisms of action of flavonoids in CVD. 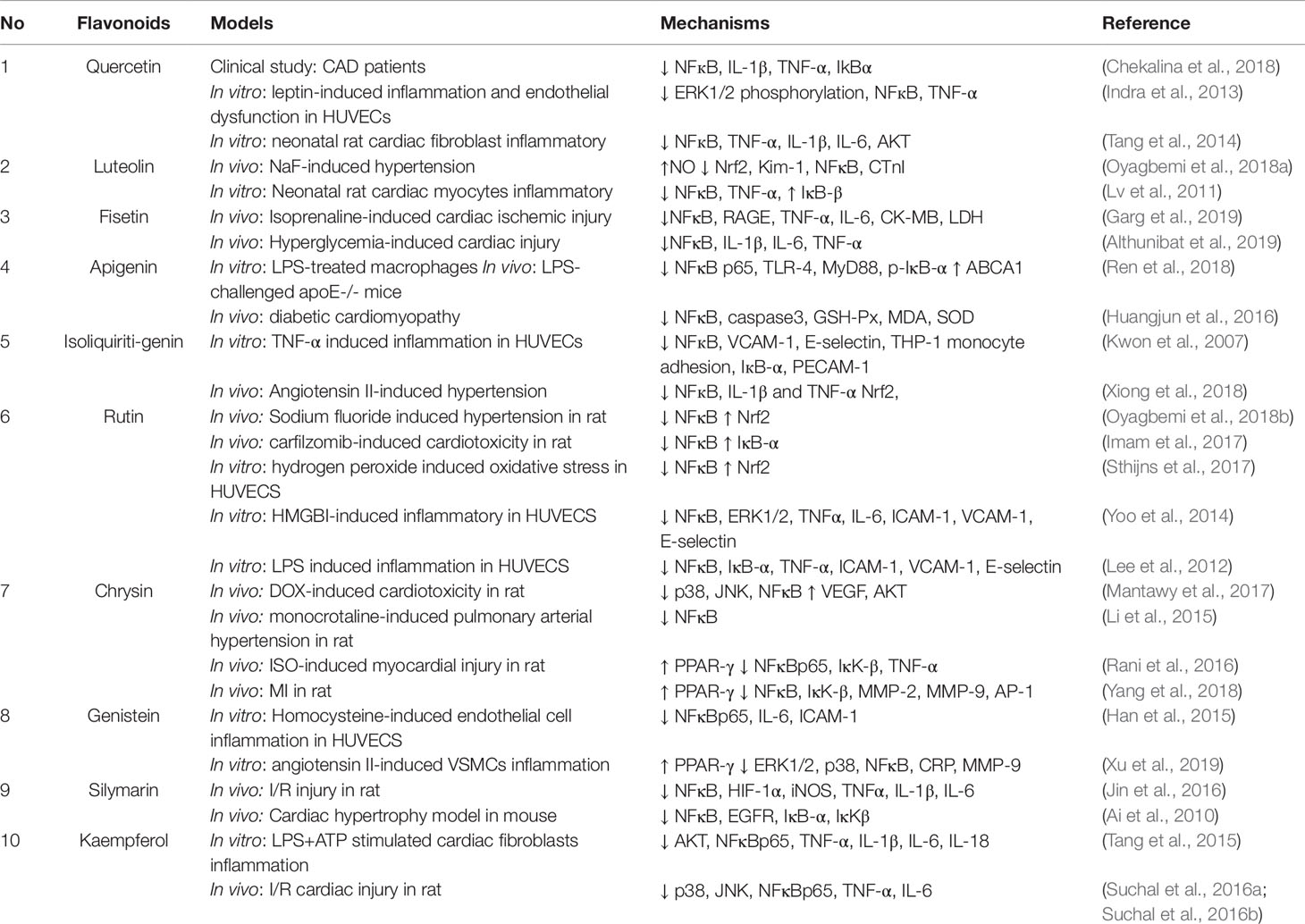 Table 1 Effect of flavonoids in CVDs.

The actions of flavonoids in mitigating inflammation by modulation of NFкB offer potential agents for the treatment of CVDs. However, several of these actions reported in vitro may yet to be fully recognized due to their low bioavailabilities following oral administration (Hollman and Katan, 1998; Thilakarathna and Rupasinghe, 2013). Flavonoids have shown promising results in reducing atherosclerosis in several animal experimental models; however, conflicting results were reported in human clinical trials (Arts and Hollman, 2005; Zordoky et al., 2015). The low bioavailability and clinical efficacy of flavonoids are attributed to their poor absorption, metabolism by the metabolizing enzymes in the intestine and liver, and structural modifications by the colonic bacteria remain as the major problems. Continuous investigation is required to enhance the bioavailability and efficacy of the flavonoids to tap the full potential of these natural agents.

All authors contributed to the writing. KC, DM, and MM conceived, designed, and revised the manuscript.

This study was funded by Government Agency grant GA001-2017, MAHSA University and USIM research project code: PPPI/FPG/0118/051000/15618 Universiti Kebangsaan Malaysia and Universiti Putra Malaysia. The funding agencies played no role in the design of the study and collection, analysis, and interpretation of data and in writing the manuscript, which are fully the responsibilities of the authors.

The reviewer ZJ declared a shared affiliation, with no collaboration, with one of the authors, XFL, to the handling editor at time of review

Copyright © 2019 Choy, Murugan, Leong, Abas, Alias and Mustafa. This is an open-access article distributed under the terms of the Creative Commons Attribution License (CC BY). The use, distribution or reproduction in other forums is permitted, provided the original author(s) and the copyright owner(s) are credited and that the original publication in this journal is cited, in accordance with accepted academic practice. No use, distribution or reproduction is permitted which does not comply with these terms.

Inflammation in Cardiovascular Diseases: Role of the Endothelium & Emerging Therapeutics