Meteorin-like (Metrnl) is a newly discovered myokine. Plasma Metrnl is decreased in subjects with newly diagnosed type 2 diabetes (T2D) and correlated with insulin resistance. This study aims to determine the effects of Metrnl on the apoptosis and proliferation of β cell. Mouse insulinoma MIN6 cells were divided into six groups: normal control, low glucose, high glucose, Vehicle, Metrnl, and Dickkopf 1 (DKK1) groups. MIN6 cells in Metrnl group were transfected with recombinant pCDH-Metrnl vector. WNT/β-catenin pathway was inhibited using DKK1. Then the apoptosis of MIN6 cells was detected using flow cytometry and TUNEL labeling. Immunofluorescence of Ki67 or Edu-594 was used to determine the β cell proliferation. db/db mice were confirmed as T2D group. Lentivirus-Metrnl was injected from the caudal vein of db/db mice once every two weeks for two times. High glucose induced the apoptosis of MIN6 cells and elevated expression of caspase 3. In addition, high glucose resulted in reduced β cell proliferation, cell viability, insulin secretion as well as decreased expression of β-catenin and TCF4. Metrnl ameliorated the above effects of high glucose. And the protecting role of Metrnl was inhibited by DKK1. T2D mice showed higher body weight and blood glucose compared with the controls. The β cell apoptosis was increased while the β cell proliferation and WNT/β-catenin pathway were inhibited in T2D mice. Metrnl treatment partly reversed the above changes in T2D mice. Metrnl ameliorates β cell function by inhibiting β cell apoptosis of and promoting β cell proliferation via activating the WNT/β-catenin pathway.

Skeletal muscle was recently shown to have endocrine functions to produce active metabolites known as myokines (Pedersen and Hojman, 2012). Meteorin-like (Metrnl), a newly discovered myokine, is secreted after acute bouts of exercise and acute cold exposure (Rao et al., 2014). Metrnl up-regulates the expression of genes associated with thermogenesis in brown/beige adipocytes and promotes the production of anti-inflammatory molecules (Rao et al., 2014). Recent investigations have confirmed the association of Metrnl with diabetes. Serum Metrnl levels were found to be lower in T2D patients compared with the healthy controls (Dadmanesh et al., 2018; Lee et al., 2018; El-Ashmawy et al., 2019; Fadaei et al., 2020). In addition, Metrnl administration alleviated the impaired insulin secretion both in palmitate-incubated C2C12 cells and the skeletal muscle of high-fat diet-fed mice (Jung et al., 2018). These results indicate that Metrnl may be involved in the mechanism of maintaining β cell function and diabetes.

This study aims to determine the effects of Metrnl on the apoptosis and proliferation of β cell. Then we also detect the possible mechanism of Metrnl in maintaining β cell function.

MIN6 cells were cultured in Dulbecco's modified eagle medium (DMEM; Invitrogen, Carlsbad, CA, USA) with 10% fetal bovine serum at 37°C in 5% CO2 and 88% humidity. Cells were divided into six groups: normal control (NC), low glucose (LG), high glucose (HG), HG + Vehicle, HG + Metrnl, and HG + Metrnl + Dickkopf 1 (DKK1). Min6 cells in LG and HG group were incubated with 5.5mmol/L and 30 mmol/L glucose respectively. To perform the overexpression of Metrnl, MIN6 cells in Metrnl group were transfected with recombinant pCDH-Metrnl vector for 4 h using Lipo6000TM transfection reagent according to the manufacturer’s protocol (RiboBioCo. Ltd, Guangzhou, Guangdong, China), and then were cultured in normal medium for 24 h before the next treatment. The vehicle group was transfected with pCDH blank vector. DKK1 (100ng/mL, Sigma-Aldrich) was utilized to serve as an antagonist of WNT/β-catenin pathway.

Twelve-week-old db/db mice and db/m mice were obtained from GemPharmatech Company of Jiang Su, China and made as the T2D group. After adaptation for one week, the db/db mice were allocated into two groups based on the baseline fasting blood glucose and body weight: T2D and T2D + Metrnl groups. And the db/m mice were assigned to the control group. The mice in T2D + Metrnl group were injected with lentivirus-Metrnl (100ul, 1 × 1011 PFU/ml) from the caudal vein once every two weeks for two times (Figure 1). All animals were housed in an environmentally controlled room at 25°C with a 12-h light and 12-h darkness cycle, and fed with a normal diet and with free access to water throughout the experimental period. All animal procedures in this study were approved by the Medical Ethical Committee of our hospital.

Proteins were extracted from the cells or pancreatic tissue using a RIPA lysis buffer. The protein concentration was quantified by a DC protein kit. Protein samples were carried out with 10% SDS-PAGE, and then transferred to PVDF membranes. The membranes were blocked in 5% milk for 1 h at room temperature, and then were incubated with their primary antibodies overnight at 4°C: Metrnl (1:1,000, Abcam), Cleaved-Caspase 3 (1:2000, Proteintech), TCF4 (1:1,000, Cell Signaling Technology), Non-phospho (Active) β-catenin (1:1,000, Cell Signaling Technology), and β-actin (1:5,000, Proteintech). In the following day, the membranes were incubated with HRP-linked secondary antibodies for 2 h at room temperature. The bands were detected by chemiluminescence and the protein quantification was performed by ImageJ software.

TUNEL assay was used to measure cell apoptosis in MIN6 cells. In brief, cells were seeded on glass coverslips in 4-well dishes. Then the apoptosis of cells was analyzed via TUNEL assay using Cell Death Detection Kit (Roche Diagnostics) following the manufacturer’s recommended procedure. The samples were stained with DAPI to visualize total cells. TUNEL-positive cells were counted and normalized to total MIN6 cells.

An MTT kit (Roche Diagnostics, Indianapolis, IN, USA) was used to determine the proportion of viable MIN6 cells. 5 × 103 cells were seeded into 12-well plates. MTT (500 µg/ml) was added to each well for 3 h at 37°C. MTT reagent was removed and dimethyl sulfoxide was added to dissolve the cells. The cells were kept in the dark and the optical density was read at 570 nm using a microplate reader. Experiments were repeated three times.

Min6 cells were seeded in 96-well plates. Then cells were incubated with Krebs-Ringer bicarbonate HEPES (KRBH, PanEra, Guangzhou, China) buffer for 1 h at 37°C. Thereafter, the KRBH buffer was removed and 1 ml KRBH containing 5.0 or 20.0 mM glucose was added into subgroups separately for 1 h at 37°C. The insulin levels were determined using an ELISA Kit for insulin (Cloud-Clone Corp., Wuhan, China) according to the manufacturer’s instructions.

Statistical analysis was performed using SPSS version 16.0 software. One-way ANOVA was utilized to compare the difference between the groups. A P-value less than 0.05 was considered statistically significant.

Metrnl and DKK1 groups showed higher mRNA and protein expression of Metrnl compared with the other groups (Figure 2). This confirmed the successful transfection of Metrnl. 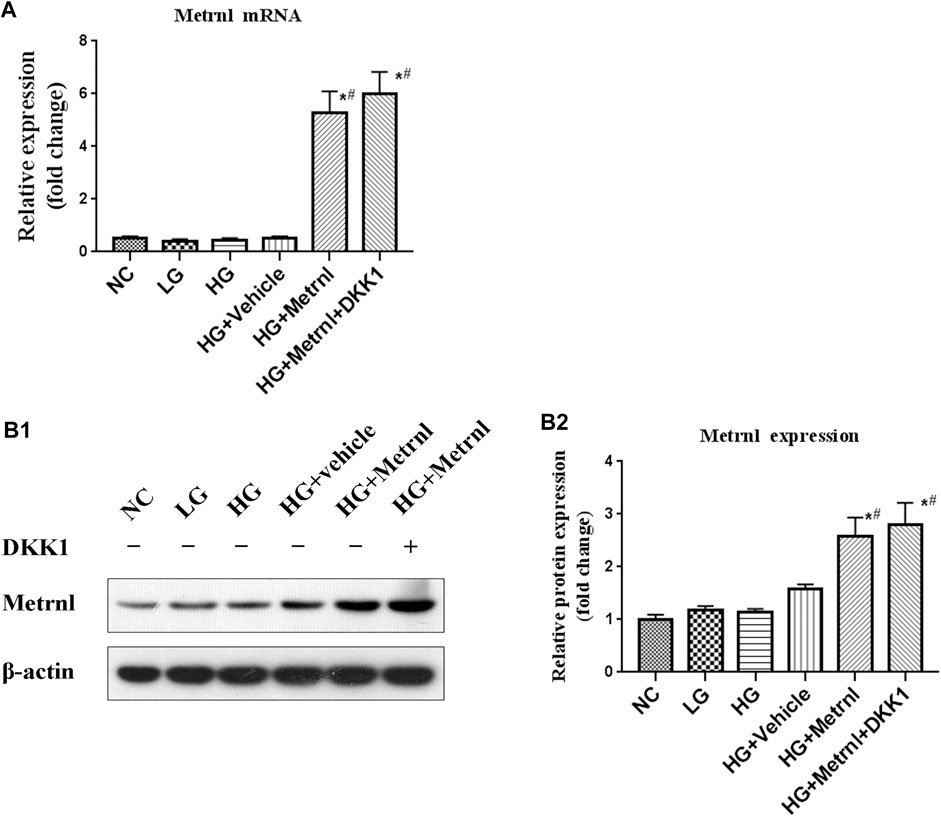 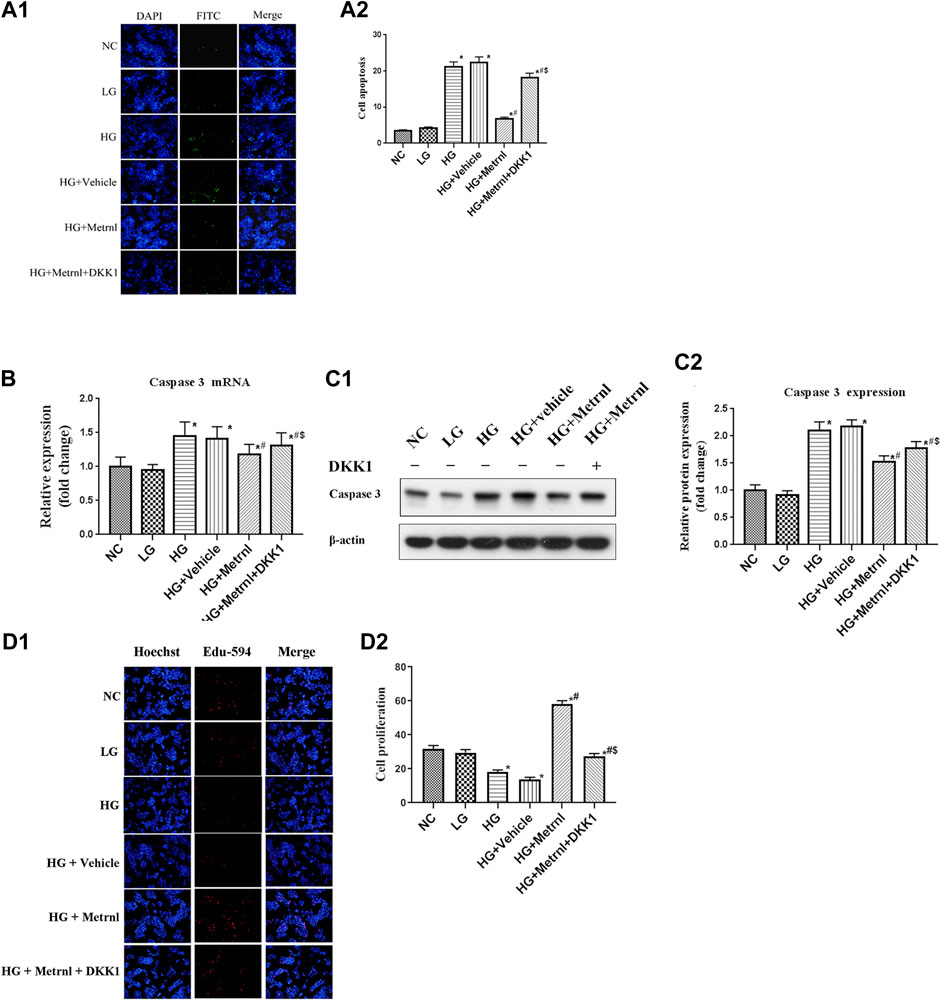 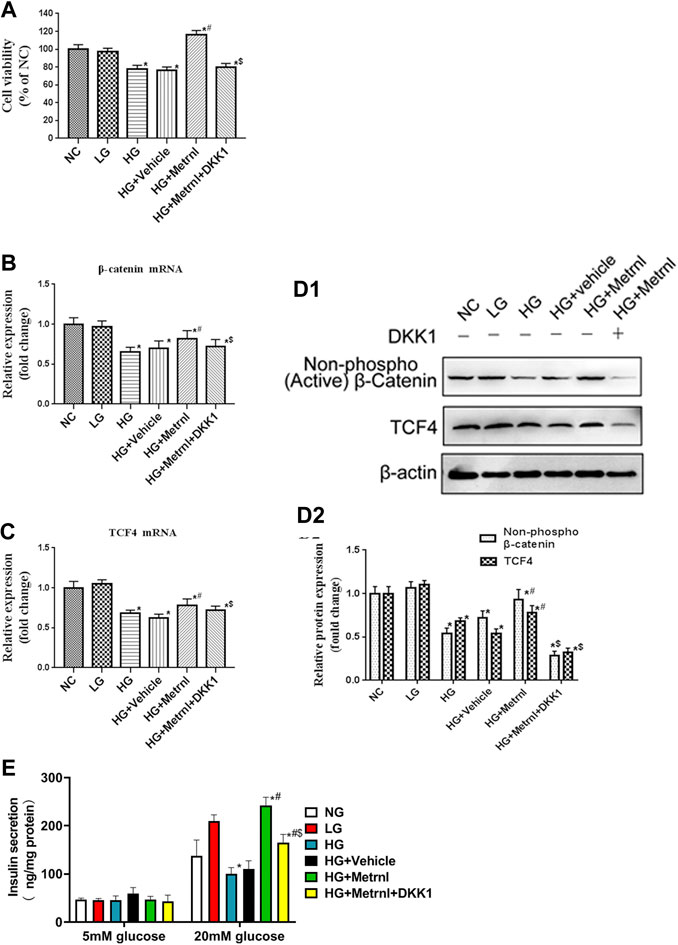 The Expression of Metrnl in pancreatic Tissues 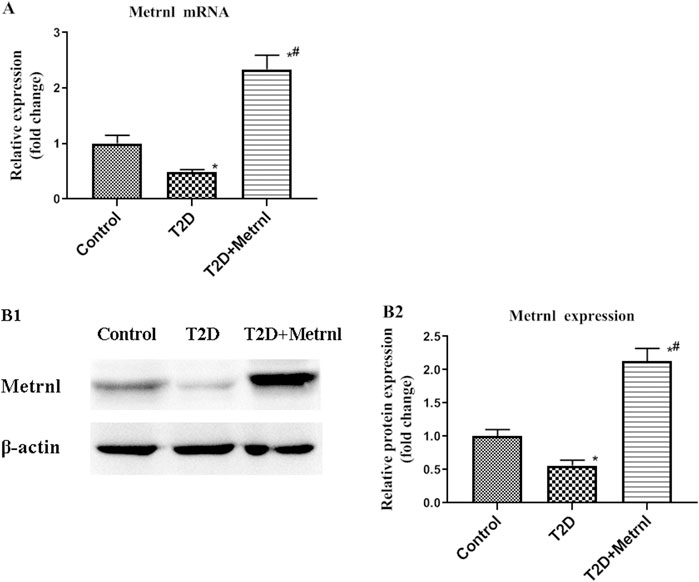 FIGURE 7. The expression of Metrnl in pancreatic tissues of mice. (A) The gene expression of Metrnl quantified by real-time PCR. Data are presented as the fold change of transcripts for the target gene in the indicated groups normalized to β-actin. (B) Representative western blot showing Metrnl protein levels in MIN6 cells of different groups. Band densities were converted to a bar graph. All data are expressed as mean ± SEM [n = 8/group (mRNA), n = 8/group (protein)]. *p < 0.05 for differences vs. control group; #p < 0.05 for differences vs. T2D group. T2D: type 2 diabetes.

As shown in Figures 8A,B, the expression of cleaved caspase 3 in the pancreatic tissues of T2D mice was significantly increased than in the control mice. Caspase 3 expression was suppressed by Metrnl treatment. This indicates that Metrnl has a protecting role against β cell apoptosis which is assessed using caspase-3 expression. 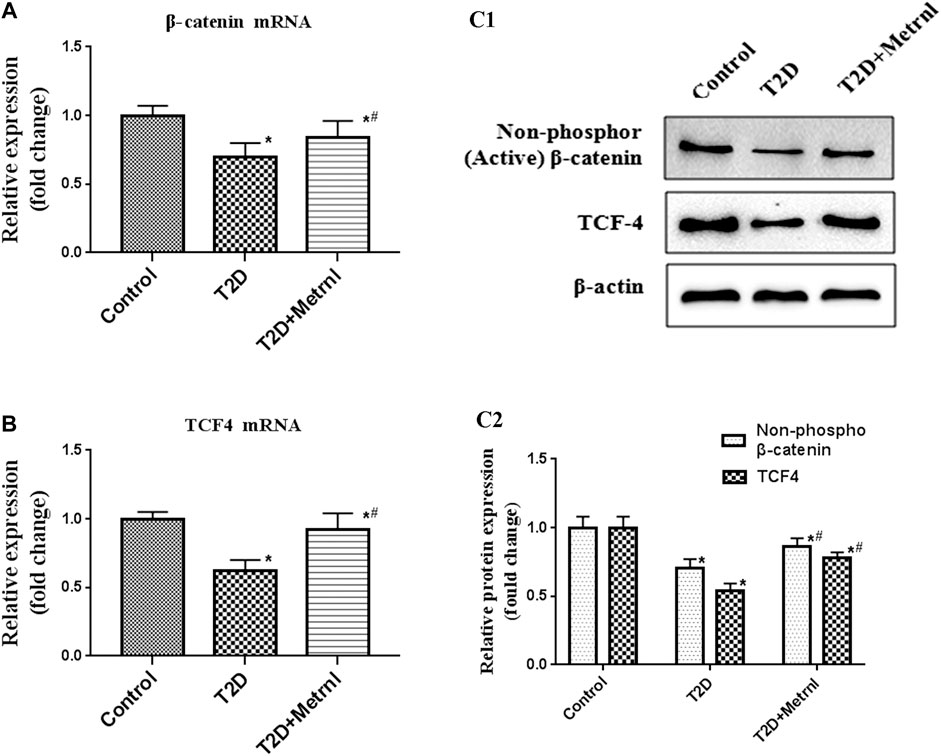 The animal study was reviewed and approved by Qilu Hospital (Qingdao).

Copyright © 2021 Hu, Wang and Sun. This is an open-access article distributed under the terms of the Creative Commons Attribution License (CC BY). The use, distribution or reproduction in other forums is permitted, provided the original author(s) and the copyright owner(s) are credited and that the original publication in this journal is cited, in accordance with accepted academic practice. No use, distribution or reproduction is permitted which does not comply with these terms.

†These two authors contribute equally to this article