Intravitreal injections of anti-vascular endothelial growth factor (VEGF) have become increasingly popular in the treatment of ocular illness such as neovascular age-related degeneration (nAMD), diabetic macular edema (DME), and macular edema secondary to retinal vein occlusion in recent years. Its safety and efficiency have been shown by a large number of clinical trials (Pozarowska and Pozarowski, 2016). The novel anti-VEGF reagent conbercept (KH902; Chengdu Kanghong Biotech Co., Sichuan, China) is a fully humanized, soluble, VEGF receptor protein. It contains extracellular domain 2 of vascular endothelial growth factor receptor (VEGFR) 1 (Flt-1) and extracellular domains 3 and 4 of VEGFR2 (KDR-3 and 4) fused to the Fc portion of the human immunoglobulin G1 (IgG1). The most notable feature of conbercept is that it binds to VEGF-A, VEGF-B, and the placental growth factor with high affinity. Extracellular domain 4 of VEGFR2 can stabilize the receptor–ligand complex and lengthen the half-life of conbercept to more effectively reduce vitreous VEGF concentrations and inhibit neovascularization (Chen et al., 2013).

However, few studies have determined the efficiency of unilateral intravitreal anti-VEGF injection in fellow eyes (Avery et al., 2014; Huang et al., 2018). In patients with bilateral DME, we investigated the best corrected visual acuity (BCVA) and central retinal thickness (CRT) changed in untreated eyes after receiving the unilateral intravitreal conbercept injection. At the last visit, CRT decreased significantly in the untreated eyes and increased/unchanged BCVA accounted for a large proportion of the eyes (67%) after treatment (Di et al., 2020). Nevertheless, the anti-VEGF mechanism in untreated eyes is controversial at present. In a rabbit model, Bakri et al. (2007a, b) reported the pharmacokinetics of intravitreal bevacizumab and ranibizumab. In contrast to intravitreal ranibizumab, which was not detectable in the non-injected eyes during the follow-up, these authors found that a low concentration of bevacizumab enters systemic circulation and can be detected 4 weeks later in the aqueous humor of the non-injected eyes. In this study, intravitreal injection of conbercept was applied unilaterally to rabbit eyes, and the drug concentration in the venous serum, the aqueous humor, and the vitreous humor of the fellow eyes was detected to further analyze the mechanism of conbercept in fellow rabbit eyes.

Thirty male New Zealand rabbits weighing 2.5–3 kg were used. A single intravitreal injection of conbercept (0.5 mg/0.05 ml) was administered in the right eyes of all rabbits, and the left eyes received no intravitreal injection. All animal research conformed to the Laboratory Animal Ethics Committee of Peking Union Medical College Hospital (XHDW-2020–039), and the procedures adhered to the guidelines from the Association for Research in Vision and Ophthalmology for animal use in research.

The rabbits were anesthetized with 10 mg/kg of intramuscular injection of xylazine hydrochloride (2.0 ml, Huamu Animal Health Products Co. Ltd., Jilin, China) and 0.4% oxybuprocaine hydrochloride ophthalmic drops (5.0 ml, Santen Pharmaceutical Co., Ltd., Japan) topically on the eye. Povidone iodine (5%, 60 ml, Likang Disinfection Technology Co., Ltd., Shanghai, China) was placed on the conjunctiva of injected eyes. The vitreous puncture site, 2.5 mm behind the superior nasal limbus, was determined by the Castroviejo Caliper curved ophthalmic ruler. Then, a 30-gauge needle was used to inject intravitreally through the puncture site, and the tip was directed into the mid-vitreous about 6 mm deep. At last, 0.5 mg (0.05 ml) of conbercept was slowly administered. Ofloxacin eye ointment (3.5 g, Santen Pharmaceutical Co., Ltd., Japan) was topically applied once immediately after the procedure. Eyes were monitored weekly for signs of inflammation.

Six rabbits were sacrificed by 100 mg/kg intravenous pentobarbital sodium (Sino Pharm Chemical Reagent Co. Ltd., China) on each of the following days: days 1, 3, 7, 14, and 30. A venous blood sample was taken from each rabbit. Both eyes were enucleated, and 0.5 ml of aqueous humor and 1.0 ml of vitreous humor were extracted into a syringe using 30-gauge and 18-gauge needles, respectively. The samples of aqueous humor and vitreous humor were then frozen at -80°C. The serum was collected by centrifugation (4,000 r/min) for 5 min after allowing the sample to clot at room temperature for 1 h. The serum was frozen at -80°C until testing. Before the immunoassay, all samples were diluted as needed.

The enzyme-linked immunosorbent assay (ELISA) method was used to measure conbercept concentrations. Human VEGF 100 protein (ACROBiosystems, Newark, DE, United States) was used for capturing, and horseradish peroxidase–conjugated AffiniPure rabbit anti-human IgG (Boster Biological Technology, Co., Ltd., Wuhan, China) was used for detection. The human VEGF 100 protein was diluted to a concentration of 1 μg/ml in PBS and then aliquoted into 96-well microplates (Greiner Bio-One GmbH, Kremsmünster, Austria) at a concentration of 100 μl/well. After incubating overnight at 4°C, the microplates were washed three times with PBST and blocked for 2 h at room temperature with 1% bovine serum albumin (BSA)-PBS. The plates were stored dry at 4°C after a final wash with PBS.

Pharmacokinetics of Conbercept in the Injected Eye 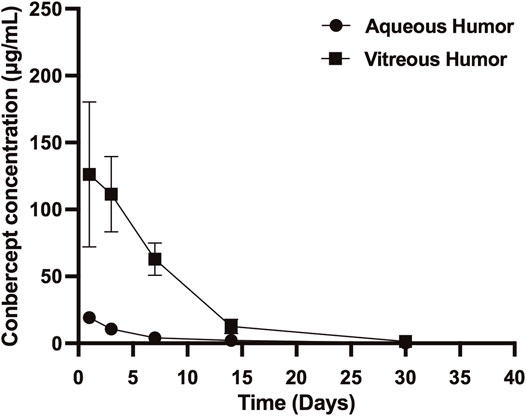 FIGURE 1. Conbercept concentration in the vitreous humor and aqueous humor after intravitreal injection of 0.5 mg of conbercept. Samples were taken from the aqueous and vitreous of the injected eye.

TABLE 1. Concentration of conbercept in the vitreous, aqueous, and serum after intravitreal injection of 0.5 mg conbercept.

Pharmacokinetics of Conbercept in the Non-injected Eye 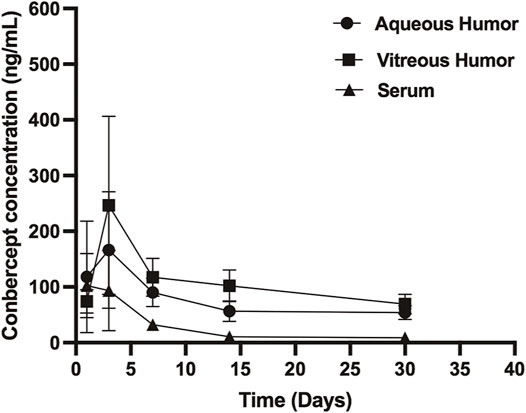 FIGURE 2. Conbercept concentration in the vitreous humor, aqueous humor, and serum after intravitreal injection of 0.5 mg of conbercept. Samples were taken from the aqueous and vitreous of the non-injected eye.

Pharmacokinetics of Conbercept in Venous Serum

Different kinds of molecules might be related to the low concentration of conbercept in the contralateral eyes. Soler et al. (2017) performed a preliminary study that evaluated the safety and efficacy of medium-chain triglycerides for use as a tamponading agent in minipigs. He found that electroretinography and histological analyses showed no significant difference between medium-chain triglycerides eyes and contralateral eyes. In addition, the molecular weight is a determining factor for ocular pharmacokinetics, according to Dias and Mitra (2000). Because the rate of diffusion is inversely proportional to the cube root of the molecular weight, higher molecular weights are expected to extend the half-life in the vitreous. Moreover, Hanhart et al. (2014) found that the effects of bevacizumab on untreated eyes are related to the Fc portion and its active transport into the systemic circulation. Conbercept includes the Fc region of the immunoglobulin IgG1 with a molecular weight of 149 kD. It was speculated that the molecular type and structure of conbercept were related to its effects on the fellow eye. Khodabande et al. (2021) found some electroretinography changes in contralateral rabbits’ eyes in the unilateral intravitreal injection of digoxin and carboplatin. They proposed it might be related to the repeated intravitreal injection of the agents that cause damage to the ocular-blood barrier. Furthermore, in both eyes of patients who were treated unilaterally for uveitis-related cystoid macular edema, Acharya et al. (2011) found that intravitreal injection of ranibizumab had a beneficial effect. Wu and Sadda (2018) performed unilateral intravitreal injection of bevacizumab and ranibizumab in a patient with bilateral macular edema secondary to branch retinal vein occlusion. After 6 weeks of follow-up, the bilateral macular edema was relieved. Therefore, it has been speculated that the impaired blood-retinal barrier function may alter penetrance to the fellow eye. However, Bakri et al. (2007a, b) discovered that the concentration of bevacizumab in the aqueous humor was higher than that in the vitreous humor in the non-injected eye at time points before 21 days, and he proposed that bevacizumab enters the eye from systemic circulation via the anterior route where it diffuses into the vitreous, rather than through the choroidal blood flow. In our study, we found that the maximum conbercept concentrations in the aqueous humor and vitreous humor of non-injected eyes were similar, but the time of peak conbercept concentration in the aqueous humor was earlier than that in the vitreous humor. The conbercept concentration in the serum was lower than that in the aqueous humor and vitreous. These results were consistent with those of Bakri et al. (2007b). In addition, Chou et al. (2018) performed an animal study to confirm previous reports that retrobulbar lidocaine impairs axonal transport; the results showed that fluorescence is absent in the lateral geniculate nucleus (LGN) and superior colliculi (SC) contralateral to the lidocaine-injected eye, but fluorescence is present in the LGN and SC contralateral to the phosphate-buffered saline-injected eyes. Thus, the axonal transport might also be related to the low concentration of conbercept in the contralateral eyes.

However, our study also has limitations. First, there are structural differences between rabbit eyes and human eyes. Rabbits have a less vascular retina, a smaller vitreous cavity (1.5 ml vs. 4.5 ml in humans), a larger lens, and a smaller serum compartment. Because of these factors, pharmacokinetics in rabbits may differ from those in humans. Second, normal healthy rabbit eyes were selected in our study, and an animal model with fundus disease, such as AMD, DME, or macular edema secondary to retinal vein occlusion was not established, which can be further studied in the future. Finally, the initial time for determination of the conbercept concentration for the pharmacokinetic analysis was one day after conbercept intravitreal injection. Since this study mainly observed the distribution of conbercept in the non-injected eyes and previous studies have analyzed the pharmacokinetics of conbercept in the injected eyes, determination of the conbercept concentration was not performed in the early stage after intravitreal injection. However, the ocular pharmacokinetics results from this study are consistent with those of previous studies.

The animal study was reviewed and approved by the Laboratory Animal Ethics Committee of Peking Union Medical College Hospital.

All listed authors made significant contributions to this manuscript through study design, data analysis, and acquisition, or during the process of writing and revisions. YD and HX carried out the entire procedure including the collection of medical records, statistical analysis, drafting the manuscript, and manuscript revision. JY conceived of the study, coordinated, and participated in the entire process of drafting and revised the manuscript. ZG performed the collection of medical records. All authors commented on previous versions of the manuscript and approved the final manuscript.

Copyright © 2021 Di, Xu, Ye and Guo. This is an open-access article distributed under the terms of the Creative Commons Attribution License (CC BY). The use, distribution or reproduction in other forums is permitted, provided the original author(s) and the copyright owner(s) are credited and that the original publication in this journal is cited, in accordance with accepted academic practice. No use, distribution or reproduction is permitted which does not comply with these terms.