How prevalent is “food addiction”?

In 1956, Randolph recognized that “[…] a specific adaptation to one or more regularly consumed foods to which a person is highly sensitive, produces a common pattern of symptoms descriptively similar to those of other addictive processes” (Randolph, 1956, p. 221). In his view, those addictive eating patterns could be observed for the consumption of corn, wheat, coffee, milk, eggs, and potatoes (Randolph, 1956, p. 221). Since these early beginnings, the view that rather high-calorie foods, especially those high in sugar, have an addictive potential, has been developed (Avena et al., 2008). But other ingredients like salt (Cocores and Gold, 2009) and additives (Ifland et al., 2009) have also been considered as making foods “hyperpalatable” (Gearhardt et al., 2011a).

Many parallels have been drawn between substance dependence and excessive consumption of such hyperpalatable foods. Animal models show that rats develop behavioral symptoms, but also show neurochemical changes, that are comparable to drug use when they have intermittent access to sugar and chow (Avena et al., 2008) or receive a cafeteria-like diet (Johnson and Kenny, 2010). For instance, it has been found that binge access to sugar causes recurrent increases in extracellular dopamine while there is a decrease in D2 receptor binding in the striatum (Avena et al., 2008).

In humans, increasing evidence suggests that individuals with binge eating-related disorders, i.e., bulimia nervosa (BN), binge eating disorder (BED), and obesity, experience behavioral symptoms and neurochemical changes that are highly comparable to other addictive behaviors (Volkow et al., 2008; Davis and Carter, 2009; Gearhardt et al., 2009a; Pelchat, 2009). Moreover, increased prevalence of drug use can be found in BN and BED, but not in anorexia nervosa (Calero-Elvira et al., 2009). In recent years, neuroendocrine pathways have been identified that are involved in both drug- and food-seeking behaviors. Specifically, appetite-regulating peptides like ghrelin, neuropeptide Y, orexin, or leptin have also been associated with craving for alcohol (Leggio, 2010; Leggio et al., 2011a,b) or tobacco (Von der Goltz et al., 2010; Al’Absi et al., 2011). On a neurochemical level, reduced striatal D2 receptor availability has been found in obese patients similar to patients with substance use (Volkow et al., 2008).

Practical implications have been derived from this food addiction model. Those involve implications for the classification and treatment of especially BED and obesity. For instance, while BED will be included in the fifth revision of the Diagnostic and Statistical Manual of Mental Disorders (DSM-V; Wonderlich et al., 2009), it has also been suggested to consider obesity as a mental disorder (Volkow and O’Brien, 2007). Most recently, even political actions were proposed that could help to attenuate the obesity epidemic (Gearhardt et al., 2011a). However, those are heavily debated (Wilson, 2010; Blundell and Finlayson, 2011; Rogers, 2011; Smith, 2011). For instance, it has been argued that only a small proportion of individuals could be described as food addicted (Blundell and Finlayson, 2011; Rogers, 2011). Therefore, this article aims at improving our knowledge of the food addiction construct by reviewing current evidence in humans about (1) the most common symptoms of food addiction (2) the prevalence of food addiction diagnoses and (3) its relationship to body mass and binge eating.

Few questionnaires have been provided that assess addictive eating. Merlo et al. (2009) used the Eating Behaviors Questionnaire (EBQ) which was specifically created for their study. Parallel forms of this 20-item instrument were used for parents and children. Questions include the “3 C’s” of addiction (compulsive use, attempts to cut down, continued use despite consequences) among others. One question directly asks “Do you think you are addicted to food?” Items are scored on a six-point scale (ranging from never to always). Internal consistency of the EBQ is α = 0.84 (parents) and α = 0.88 (children), respectively (Merlo et al., 2009).

Gearhardt et al. (2009b) recently presented the Yale Food Addiction Scale (YFAS) to clearly differentiate between individuals with and without addictive eating patterns. This 25-item questionnaire includes mixed response categories (dichotomous and Likert-type format). A food addiction symptom count can be calculated which corresponds to the criteria for substance dependence of the DSM-IV-TR (American Psychiatric Association, 2000; Table 1). Furthermore, two items assess clinically significant impairment or distress from eating. Food addiction can be “diagnosed” when three symptoms and clinically significant impairment or distress are present. Internal consistency of the YFAS is α = 0.86 (Gearhardt et al., 2009b). Psychometric properties could also be replicated in a German version (Meule et al., in press). 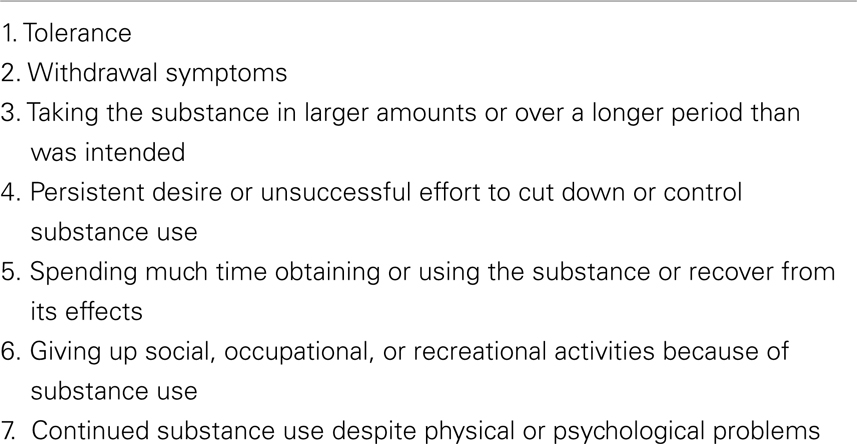 Table 1. Diagnostic criteria for substance dependence according to the DSM-IV.

Besides those self-report measures, one study also used an interview-based examination of addictive eating (Cassin and von Ranson, 2007). Here, the substance dependence module of the structured clinical interview for DSM-IV axis I disorders (SCID-I) was used and references to drugs were substituted by references to binge eating. Furthermore, they developed a binge eating-related interview version of Goodman’s criteria for addictive disorder (Cassin and von Ranson, 2007).

Food Addiction in Childhood and Adolescence

Only two studies examined food addiction symptoms in children and adolescents. In one study, Merlo et al. (2009) found that 15.2% of overweight children indicated that they “Often,” “Usually,” or “Always” think that they are addicted to food. The most commonly endorsed items were related to compulsive eating and attempts to cut down. Scores on the EBQ were positively correlated with body-mass-index (BMI, r = 0.31, Merlo et al., 2009).

Most recently, a qualitative study has been conducted in a sample of overweight-to-obese children and adolescents (Pretlow, 2011). The most common symptoms were (1) consuming large amounts over a long period, (2) unsuccessful efforts to cut down, and (3) continued use despite adverse consequences. With regard to tolerance, 77% of respondents indicated that they now eat more than when they first became overweight. However, when asked why they thought they eat more now, only 15% indicated that food satisfied them less. After participants were provided with a definition of addiction, 29% of respondents indicated that they see themselves as addicted to most foods (Pretlow, 2011).

Like in children, parents most often endorsed items related to compulsive eating (especially craving) and attempts to cut down (Merlo et al., 2009). In another study, the most common symptoms were (1) persistent desire or repeated unsuccessful attempts to cut down, (2) continued use despite problems, and (3) much time spent to obtain food, eat, or recover from eating when the YFAS was used (Gearhardt et al., 2008). Most recently, it could be shown that these three symptoms were also the most often endorsed in a sample of obese participants with BED (Gearhardt et al., 2011b).

Table 2. Percentage of food addiction diagnosis according to the Yale Food Addiction Scale as a function of weight category.

Some studies investigated the relationship between food addiction and BED. In the interview-based assessment of Cassin and von Ranson (2007), 92.4% of BED patients could be classified as food addicted when modified DSM-IV substance dependence criteria were used. After applying modified Goodman’s addictive disorder criteria, 40.5% received an food addiction diagnosis (Cassin and von Ranson, 2007). Using the YFAS, 56.8% of participants were classified as food addicted in a sample of obese patients with BED (Gearhardt et al., 2011b). Similarly, 72.2% of obese participants who received an YFAS diagnosis were also diagnosed with BED, which further supports the strong relation between the two constructs (Davis et al., 2011).

The most common food addiction symptoms include consuming large amounts for a long period, repeated attempts to cut down, and continued use despite adverse consequences. Tolerance and time effort are further, but less frequent symptoms. Withdrawal symptoms and reduction of social, occupational, or recreational activities are rarely reported.

Food addiction diagnoses are positively associated with BMI and, therefore, increased in obese individuals and even more in obese patients with BED. Moreover, this relationship between body mass and food addiction may be non-linear. Studies suggest that there is a plateau in food addiction symptomatology once an obese state is reached. However, prevalence rates show that the obesity epidemic cannot be fully attributed to addictive eating. Notably, an arguably high proportion (up to approximately 10%) of under-, normal-, or overweight individuals can also be classified as food addicted. Hence, although food addiction is strongly related to obesity and BED, future research may also address the food addiction construct in lower weight classes. For instance, no study has investigated food addiction in relation to BN as yet, although this group might also show a high prevalence of addictive eating.

Role of funding sources: The author is supported by a grant of the research training group 1253/1 which is supported by the German Research Foundation (DFG) by federal and Länder funds. DFG had no role in the study design, collection, analysis or interpretation of the data, writing the manuscript, or the decision to submit the paper for publication.

Meule, A., Vögele, C., and Kübler, A. (in press). German translation and validation of the Yale Food Addiction Scale. Diagnostica.

Copyright: © 2011 Meule. This is an open-access article subject to a non-exclusive license between the authors and Frontiers Media SA, which permits use, distribution and reproduction in other forums, provided the original authors and source are credited and other Frontiers conditions are complied with.