Background: Patients with severe mental disorders have increased mortality, and cardiovascular disease (CVD) accounts for a large part. Physical inactivity and low aerobic fitness have been recognized as significant risk factors for CVD. In this study, we investigated the differences in aerobic fitness and physical activity between in- and outpatients with severe mental disorders.

Method and Subjects: Fifty in- and outpatients from a regional psychiatric department were included. The patients filled in a questionnaire on physical activity and completed a clinical examination. An estimation of aerobic fitness was calculated for each patient, using gender, age, waist circumference, resting heart rate, and physical activity level as variables.

Conclusion: Inpatients at a psychiatric department had lower estimated aerobic fitness than outpatients, and a lower aerobic fitness compared to the general population. Our findings suggest that inpatients with severe mental disorders should be considered a high risk group for CVD.

All patients in the psychosis section at Østmarka psychiatric department (St. Olavs Hospital, Trondheim, Norway) were asked to participate. Østmarka psychiatric department is a public, specialized hospital for patients with severe mental disorders. The department is serving a population of approximately 300,000 inhabitants in the county of Sør-Trøndelag in the middle of Norway, with mixed urban and rural areas. Patients are referred to the department when extensive resources for treatment and diagnosis are needed. Patients admitted to the psychosis section have suspected or known psychosis, severe affective disorder or other disorders requiring long-term psychiatric rehabilitation. A large part of the patients have comorbid or complicating mental disorders, including substance abuse. The section has three inpatient units, an outpatient clinic, and an exercise training clinic available for both in- and outpatients. Patients only attending the exercise training clinic were not asked to participate.

Inpatients in the psychosis section between the 23rd of September and the 1st of November 2013 or outpatients attending a consultation during the same period.

Patients who could not understand Norwegian language and patients who were not able to complete the test procedures.

The patients were asked for informed, written consent. A total of 86 patients were identified for inclusion, 48 inpatients and 38 outpatients. One patient was excluded because of language problems, 4 were unavailable for request, and 31 patients did not want to participate. A total number of 50 patients gave their consent to participate in the study.

Each patient completed a questionnaire on physical activity, lifestyle, dietary habits, and demographic data. We used the same questions on these topics as the HUNT-study (The Nord-Trøndelag Health Survey) (10). The HUNT study is a large population based health study in Norway, carried out in three waves between 1984 and 2008 in the county of Nord-Trøndelag, Norway.

Peak oxygen uptake [VO2peak (mL kg−1 min−1)] is considered the most valid measure of aerobic fitness (11). This is done by analyzing ventilation gas during strenuous aerobic exercise, which requires expensive equipment, skilled personnel and patients willing to participate in a demanding physical test. However, VO2peak can be estimated from non-exercise parameters (12). The method has been found to be reasonably accurate compared to direct measurement in a large population sample. A recent study (13) also states that estimated VO2peak predicts long-term risk of premature CVD mortality and all-cause mortality with accuracy similar to what has been obtained using a direct measure of VO2peak.

Aspenes et al. (17) have measured VO2peak directly in more than 4500 people in the HUNT study and calculated the average VO2peak for specified groups based on age and gender. We used these averages to compare the estimated VO2max for each patient with the average for the corresponding age and gender.

The study was approved by The Regional Committee for Medical and Health Research Ethics (REK) and The Norwegian social science data services (NSD). The study was conducted according to the Helsinki declaration.

A total of 23 inpatients and 27 outpatients participated in the study. All 50 patients filled in the questionnaire and completed the physical measurements. A fasting blood sample was collected from 49 patients. A description of the study population is presented in Table 1.

Table 1. Description of the study population.

Inpatients had more inpatient days in psychiatric treatment than outpatients over the last 2 years (168 vs. 30 days, p = 0.003) and all life (356 vs. 71 days, p = 0.021). More inpatients used antipsychotic medication (20 out of 23 vs. 12 out of 27, p = 0.002). The mean estimated VO2peak for patients using antipsychotic medication was not statistically different from other patients (45 vs. 48 mL kg−1 min−1, p = 0.29). Six out of 23 inpatients and 2 out of 27 outpatients had somatic diseases (heart disease, vascular disease, diabetes, and hypertension). There were no statistically significant differences in somatic disease between the two groups. Data necessary to calculate estimated VO2peak and data on height and weight is presented in Table 2. The frequency of risk factors for CVD is presented in Table 3. 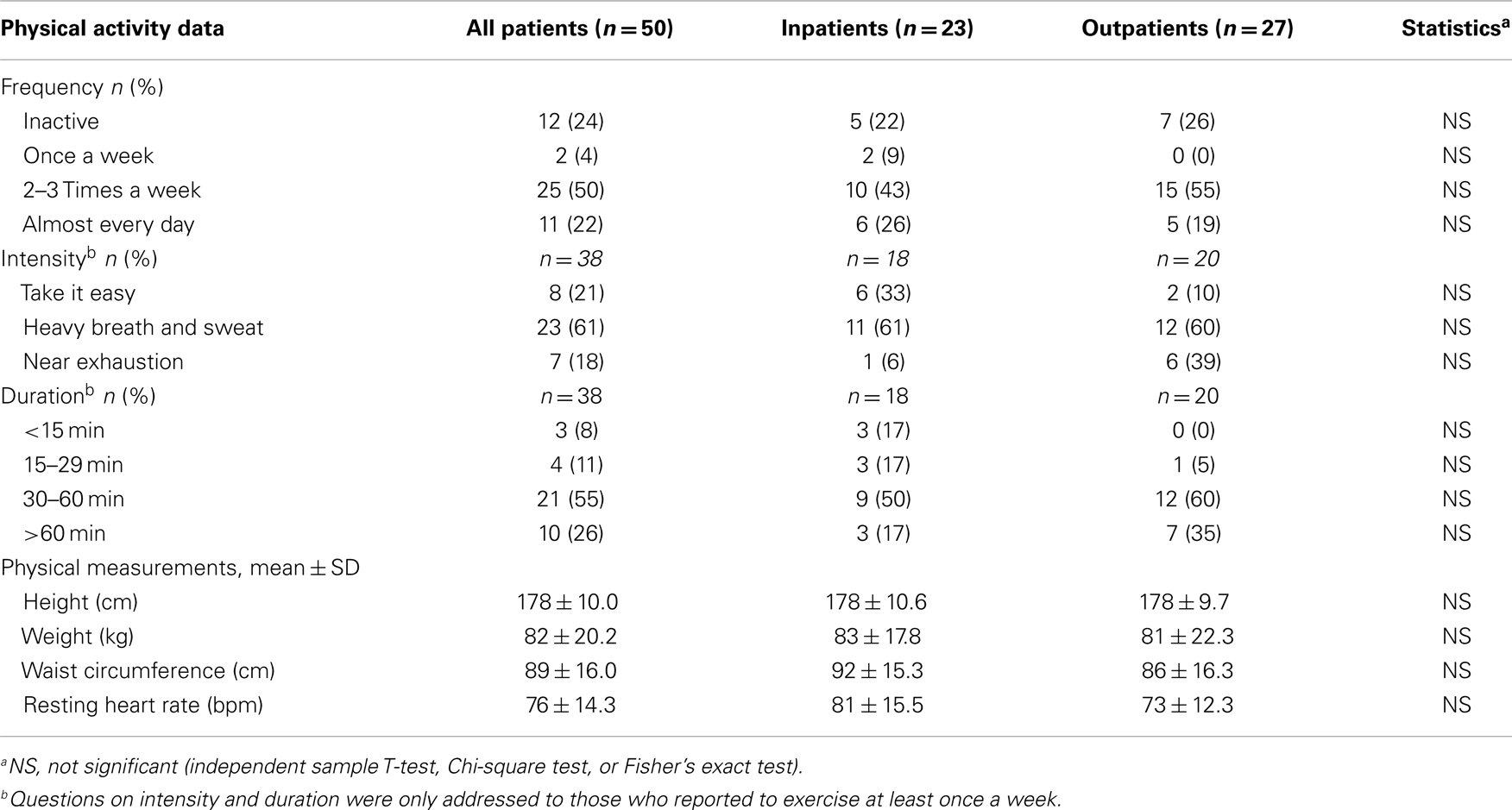 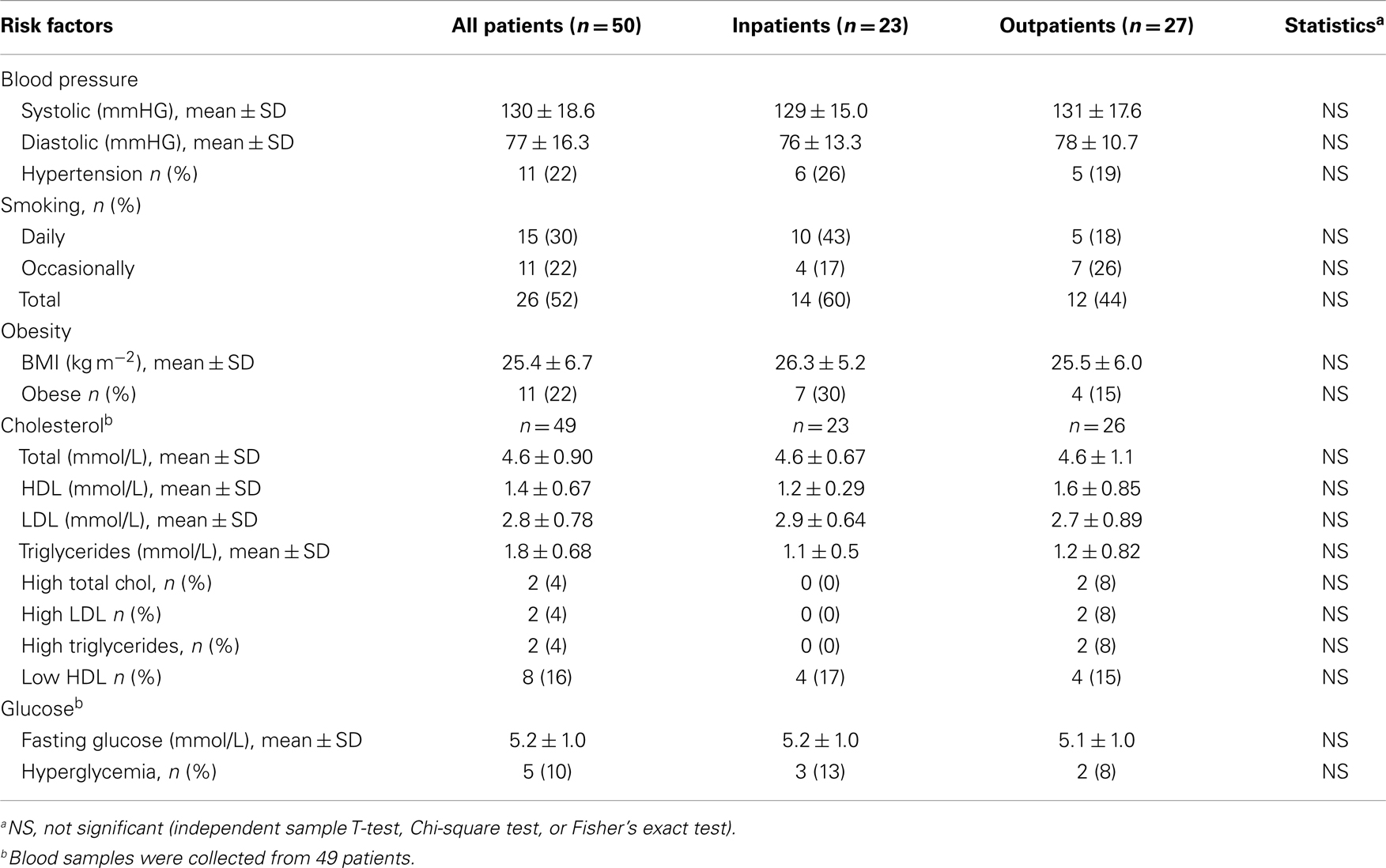 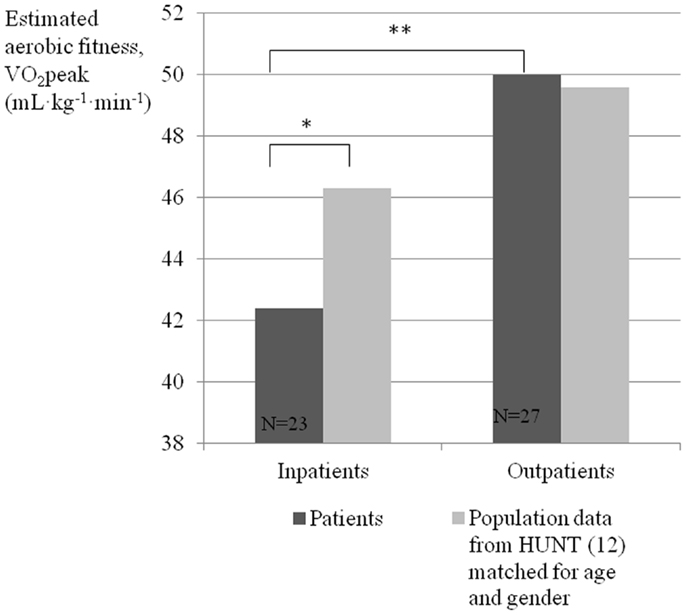 The outpatients in our study were not different from the matched population average with respect to estimated aerobic fitness. This was contrary to our hypothesis. We expected to find that outpatients as well as inpatients were below the population average, but our findings indicate that outpatients could have the same level of aerobic fitness as the general population. This could indicate that outpatients have a relatively lower risk for CVD compared to inpatients This may in turn contribute to a difference in mortality the two groups, as found by Kiviniemi et al. (9). The study population is, however, young, due to a considerable number of patients in early phases of their disorder being assessed and diagnosed. Some patients may therefore not yet have experienced the full consequences of the disorders when it comes to lifestyle and risk factors for CVD. The fact that they still might have an average risk of CVD, suggests that it is possible to live with a severe mental disorder and still keep the risk for developing CVD on a population level. A relatively high proportion of the outpatients had work or daily activity (19 out of 27, 70%), and this probably contributes to physical activity and better aerobic fitness.

We found no statistically significant differences between inpatients and outpatients in the factors used to estimate aerobic fitness, even though we found a difference in the resulting estimated fitness. This suggests that there could be differences in the separate factors, including physical activity, that are not revealed in this study because of the small size of the study population.

The number and characteristics of patients admitted to inpatient treatment in a psychiatric hospital will vary in areas, depending on the availability of inpatient treatment and selection of patients. The inpatient group identified in this study might therefore receive other care in other locations, depending on how the health service is organized. Our findings still show that there are groups of patients with severe mental disorders with low aerobic fitness and other groups with normal aerobic fitness that need to be identified in order to treat the individual patient needs.

This study has some limitations. Our results are based on an estimation of the VO2peak, not a direct measurement as most of the previous studies have been. Some of the variables used in the formulas to estimate the VO2peak are subject to measuring error or reporting error, namely, RHR, WC, and PA-index. To account for this, the same equipment was used for all patients, and the same person carried out all the measuring. The PA-index is based on self report, and therefore, comes with some degree of uncertainty. However, the questions used to estimate the PA-index have been found to have high reliability and validity (19). It is also found that the estimated aerobic fitness can predict all-cause mortality and premature cardiovascular death, which supports that it is a valid measure and sufficient for the purpose of this study.

Some of the patients were involuntarily admitted to hospital for psychotic disorders, and therefore, in a particularly vulnerable situation. However, the examinations and questions in this project could cause little or no harm, and possible negative consequences of participating were considered to be insignificant.

Copyright: © 2014 Holmemo, Fløvig, Heggelund and Vedul-Kjelsås. This is an open-access article distributed under the terms of the Creative Commons Attribution License (CC BY). The use, distribution or reproduction in other forums is permitted, provided the original author(s) or licensor are credited and that the original publication in this journal is cited, in accordance with accepted academic practice. No use, distribution or reproduction is permitted which does not comply with these terms.