Introduction: Schizophrenia is a severe, debilitating mental disorder that affects both the physical health and the functional capacity of patients, causing great impairment throughout the life course. Although physical and cognitive impairments may represent different expressions of a single systemic inflammatory process, little is known about the relationship between motor function and schizophrenia.

Objective: To evaluate physical functional capacity in patients with schizophrenia and ascertain whether it correlates with markers of inflammation, disease severity, and pharmacotherapy.

Conclusion: The present study detected significant association between measures of functional impairment and markers of inflammation, especially elevated CRP in a group of stable outpatients with DSM-IV and ICD10 diagnosis of schizophrenia. Possible explanations for the associations could be linked to continued use of antipsychotics, although underlying neuroinflammatory mechanisms directly related to illness (schizophrenia) could not be ruled out. The findings of this study expand evidences of neuroinflammation to systemic inflammation in schizophrenia linking it to alterations of physical functional capacity and point to the need of additional studies exploring general inflammation and novel therapeutic interventions.

Despite increased morbidity and mortality in schizophrenia, patients still have limited access to health care and less opportunity to receive adequate prevention and treatment than non-schizophrenic population. Mean functional motor capacity is reduced in 20% compared to general population resulting in overall reduction of global functioning (1, 2).

Persons with schizophrenia have increased risk of obesity, probably due to sedentary lifestyle, inappropriate dietary choices, and adverse effects of psychiatric drugs (3, 4). Mortality is 2.4-fold higher than in the general population after excluding death from unnatural causes (5). Furthermore, studies show that patients with schizophrenia have limited access to general health care and fewer opportunities for prevention and treatment than would be expected in a non-psychiatric population (6).

The etiology of schizophrenia is still unclear, but several patients have reported abnormalities of immune response in patients with the condition, and have suggested that the neuroinflammatory response to immune reactions may play a crucial role in the pathogenesis of schizophrenia (7). There are strong hypotheses arguing for increased inflammatory markers due to microglia activation, causing abnormal neurogenesis, neural degradation, and white matter abnormalities, and thus playing a major role in the pathogenesis of schizophrenia (2, 8). An increase in proinflammatory cytokines, such as C-reactive protein (CRP), may also correlate with risk of metabolic disease and disease severity (9, 10), possibly including ability to perform physical tasks, integrate into social activities, perform activities of daily life (ADL), and increase overall quality of life (QOL) (11). Recently found that sedentary behavior is associated with increased CRP levels and marker of cardiovascular disease in people with psychosis (12). Patients with diagnosis of schizophrenia can perform inexpensive, easy, and rapid tests of functional capacity, like the 6-min walk test (6MWT), and provide relevant data about functional capacity (13, 14). The objective of the present study was to test if physical functional capacity in patients with schizophrenia correlates with common inflammatory markers, such as CRP and Von Willebrand factor (VWF). The main study hypothesis was that patients with schizophrenia would display association of raised levels of these markers with reduced functional capacity.

The study displayed a cross-sectional design in a convenience sample of stable outpatients with simultaneous DSM-IVTR and ICD10 diagnosis of schizophrenia under public Health Care in an outpatient psychiatric clinic at a major teaching Hospital in Southern Brazil (Hospital de Clínicas de Porto Alegre – HCPA).

All participants had a confirmed diagnosis of schizophrenia, established over the course of at least four encounters involving information from both patient and their family members, with ages of 18–60 years, under stable psychopharmacological therapy tailored to their clinical condition. Patients were excluded if they had a history of alcohol or other drug abuse during the preceding month, a history of head trauma with posttraumatic amnesia, systemic or neurologic disease, current use of medication capable of inducing psychopathological manifestations, with present suicide risk, pregnant or lactating, with autoimmune conditions, taking steroidal anti-inflammatory drugs, or refusing to take part in the study. Participants completed the 6MWT, and underwent clinical assessment, and blood samples were collected at the HCPA Clinical Pathology Service as per routine laboratory practice. CRP was assayed by nephelometry (reference range: <5.0 mg/L = non-reactive; ≥5.0 mg/L = reactive), and vWF, by immunoturbidimetry (reference range: 50–160%).

Six-minute walk test was carried out in accordance with American Thoracic Society guidelines, along a hallway containing minimal external stimuli, with demarcated turnaround points, by two previously trained technicians. Participants were instructed to walk as briskly as possible, without running, during the 6-min test period. They were allowed to stop as necessary, but were notified that the timer would continue to run down. During the test, the technicians used standard words of encouragement. Blood pressure, heart rate (HR), respiratory rate, peripheral oxygen saturation, and dyspnea measured by Borg perceived exertion scale scores were measured both at the start and at the end of the test. Additionally, HR and blood oxygen saturation (BOS) were also measured at minute 3. Results were interpreted by means of the Enright and Sherrill algorithms for predicted 6MWD with upper and lower limits for sex, height, age, and weight.

Statistical analyses were carried out by SPSS 21.0 Software licensed to UFRGS. Variables were tested for normality by Kolmogorov–Smirnov test, and mean differences calculated by t-test for independent samples, Student’s t-test to compare sample means to general population, Chi-square test to analyze categorical variables, and Pearson or Spearman correlation coefficients as appropriate to test for associations among variables. The significance level was set at 0.05.

The study was approved by the HCPA Research Ethics Committee with registry number 110083 in November 2011. Patients who agreed to take part in the study provided written informed consent. Furthermore, all patients were required to bring a chaperone or legal guardian signing the consent form and observe all data collection procedures.

From 415 patients in the HCPA Schizophrenia Program registry, 213 were not under present care. The 202 patients under regular care received a telephone-based screening interview, which excluded 162 patients due to study requirements, with a final sample of 40, 18% woman and 82% men (Figure 1). Socio-demographic characteristics were normally distributed and homogeneous across the two disease duration subgroups defined by data distribution (≤7 years and >7 years), as shown in Table 1. The only significant difference was found in marital status: patients in the >7-year disease duration group were more likely to be single or separated (Table 1). 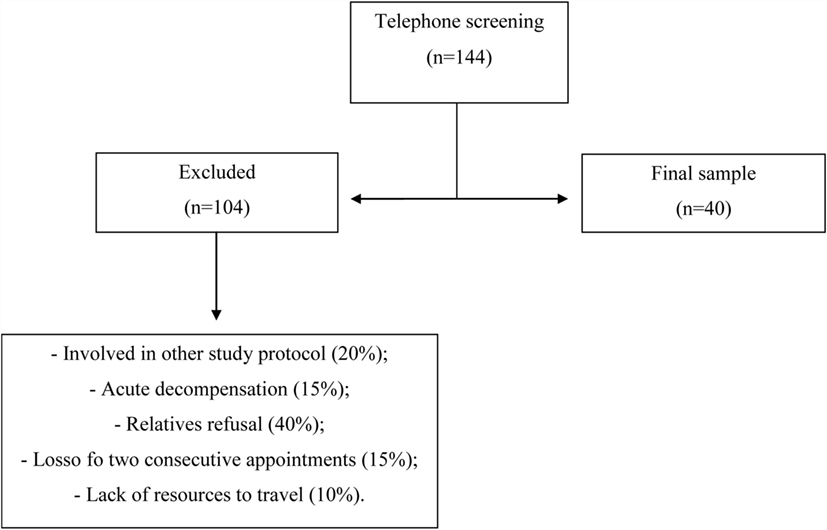 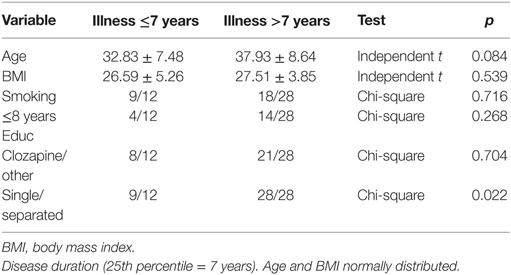 Mean respiratory rate, BOS, blood pressure, and 6MWD in male and female patients were below measures of general population. HR and CRP and vWF levels were higher in clinical sample compared to general population (Table 2). 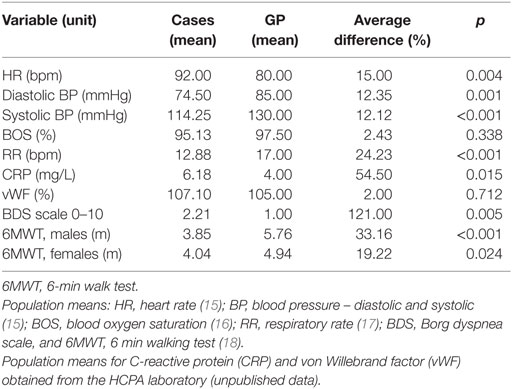 Patients were stratified by disease duration according to 25th percentile, and medications in two categories (clozapine or other neuroleptics). 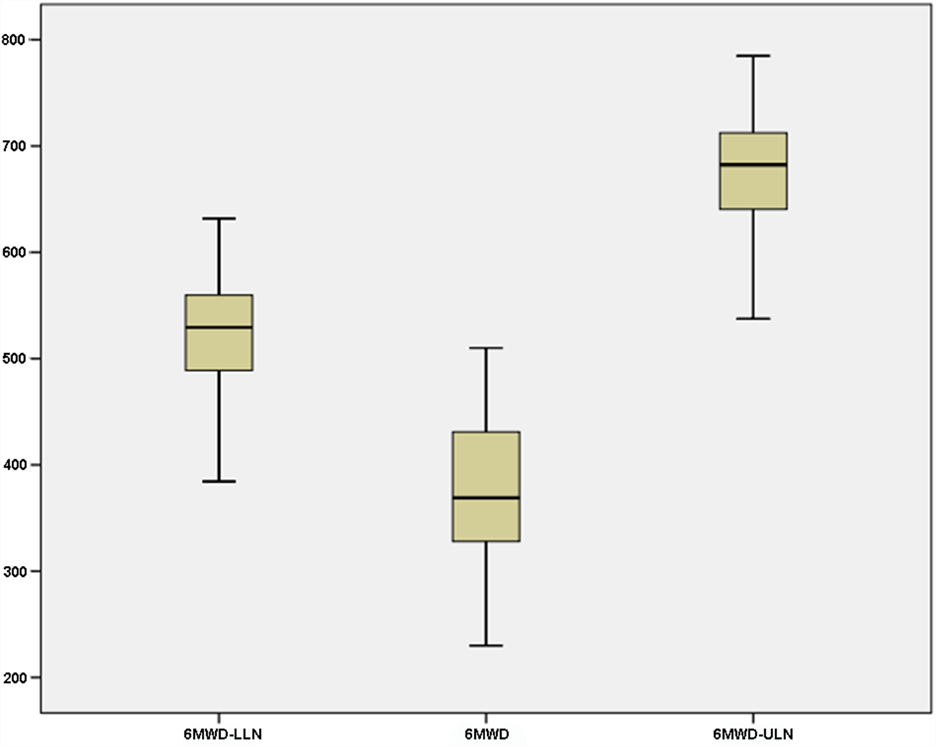 Although previous studies have identified reduced physical functional capacity in patients with schizophrenia by the 6MWT and other publications demonstrated the role of inflammatory markers in schizophrenia, this was the first study to detect association of reduced functional capacity (measured by HR, blood pressure, BOS, respiratory rate, and 6MWD) with increased inflammatory marker (CRP). By contrast, vWF, a reliable marker of endothelial dysfunction, were not significantly different from population levels, in contrast to Hope (17) of increased vWF in patients with schizophrenia compared to healthy controls (p < 0.05), increased vWF associated with small increase of CRP, and CRP and vWF positively associated with disease severity.

Body mass index and BP were not associated with physical functional capacity, suggesting that all patients were under adequate treatment, stable and well informed about illness and potential metabolic consequences. It is also of note that the usual treatment provided by the Outpatient Program includes dietary guidance.

In the sample of patients with schizophrenia included in this study, males and females had 30 and 20% reductions in functional capacity, respectively, corroborating Vancampfort (20) data of 20% reduction of 6MWD compared to healthy controls (p < 0.001). Additionally, Martín-Sierra (21) noted that impaired functional performance was associated with increased weight, metabolic complications, poor muscle fitness, smoking, negative symptoms, depressive symptoms, antipsychotic therapy, and reduced QOL. In the present study, smoking and antipsychotic use were not associated with reduced functional performance.

Among the different inflammatory markers, CRP holds a prominent position in severe psychiatric conditions, and particularly in schizophrenia. In the present study, elevated CRP levels were associated with functional impairment. In a 2014 review, Singh analyzed the current evidence for the role of CRP in schizophrenia, identifying increased CRP in 14 of 16 studies. Vuksan-Cusa (23) also reported elevated CRP levels associated with the risk of new onset metabolic syndrome. In the present sample, CRP levels were not associated with BMI (no other factors of metabolic disease were assessed in the study).

Dickerson (24), using a high-sensitivity CRP test (unlike conventional CRP testing as used in the present study), found elevated levels of CRP in patients with schizophrenia compared to healthy controls (p < 0.001). Comparison of bipolar patients disorder with normal controls failed to show difference, even after adjustment with logistic regression models.

Blood pressure was below the population average in the present sample. These results can be explained by the findings of Mackin (25), who reviewed cardiac effects of antipsychotic agents and reported association of clozapine therapy with orthostatic hypotension, probably due to the antagonist effect of clozapine with cholinergic and α1-adrenergic receptors, and with abnormalities of cardiac repolarization (specifically, prolonged ventricular repolarization). The same study also showed that clozapine associated with bradicardia, supporting the decreased HR observed in the present sample.

Overall, 72% of the 144 who completed the telephone interview did not participate due to failure to attend to the medical appointment in two consecutive days (only family members attended), recent participation in other studies, or some physical disability.

Limitations of the present study include the small sample size, failure to include additional clinical scales (BPRS, PANSS, Hamilton or Beck depression scales, etc.), the use of conventional CRP rather than high-sensitivity CRP assays, the lack of simultaneous assessment of metabolic variables (such as glucose, cholesterol, and triglyceride levels) and the lack of a control group. Furthermore, there was no record of specific medications used other than neuroleptics, and additional inflammation markers other than CRP and vWF, including cytokines and chemokines. It is advisable to surmount these deficiencies in future studies, including additional Clinical scales, inflammatory markers, and metabolic parameters.

In summary, the present study revealed an association between impaired physical functional capacity and increased CRP inflammatory marker in patients with schizophrenia, a complex condition with both physical and mental consequences. If reinforced by additional studies, it could also point to expanded treatment guidelines and protocols, including multidisciplinary and multi-systemic approach of patients with diagnosis of schizophrenia. Involvement of other professionals, such as physical therapists, trained to assess and treat functional impairments could then contribute to improved understanding and management of mental and physical health of patients with diagnosis of schizophrenia.

The study was approved by the HCPA Research Ethics Committee with registry number 110083 in November 2011 and with financial support FIPE/HCPA.

Copyright: © 2016 Szortyka, Cristiano, Ceresér, Francesconi, Lobato, Gama and Belmonte-de-Abreu. This is an open-access article distributed under the terms of the Creative Commons Attribution License (CC BY). The use, distribution or reproduction in other forums is permitted, provided the original author(s) or licensor are credited and that the original publication in this journal is cited, in accordance with accepted academic practice. No use, distribution or reproduction is permitted which does not comply with these terms.