Rethinking a Negative Event: The Affective Impact of Ruminative versus Imagery-Based Processing of Aversive Autobiographical Memories

Autobiographical memories play a role in the onset and maintenance of major depressive disorder [hereafter also referred to as depression (1)]. Both the content of the autobiographical memories and the manner in which they are recalled may be disturbed in individuals with a diagnosis of depression, compared to never depressed individuals (1). Depression is associated with a tendency toward more negative and less positive memory recall (2, 3) and a more generic, less specific (overgeneral) nature of memory recall (4).

These memory disturbances in depression may be related to a more ruminative processing style during retrieval of memories. Rumination in depression can be defined as focusing on one’s depressive symptoms and the implications of those symptoms in a repetitive, passive, and abstract way (5). Rumination during autobiographical memory recall can be conceptualized as an abstract verbal thinking style revolving around “why” events occurred, and analyzing meanings, causes, and consequences of events (6). Rumination may thereby lead to the overrepresentation of abstract verbal material in the autobiographical knowledge base, disrupting the search process for a specific memory (i.e., memories of events that happened at a specific time and place), resulting in overgeneral memory recall [for reviews, see Ref. (4, 7)].

In depression, rumination may also be conceptualized as an emotion regulation strategy (8). Rumination, being an abstract and verbal thought process, resembles worry (5, 9). Following the avoidance theory of worry (9, 10), such reduced concreteness of thought may serve to avoid vivid recall of distressing images. Similarly, rumination is hypothesized to function to avoid extreme negative emotions associated with specific distressing images in autobiographical memory (11, 12). Ruminative (abstract verbal) processing has thus been proposed to “dampen” the negative affective impact of negative memories.

In the long term, however, rumination has been found to contribute to worsened mood and onset and maintenance of depression [for reviews, see Ref. (5, 6)]. Genetic vulnerability for rumination has been found to overlap with genetic vulnerability for depression (15) and, moreover, appears to mediate genetic vulnerability for depression (16). In contrast, more specific, imagery-based recall of aversive autobiographical memories may improve emotional processing of events and result in more functional recall of positive autobiographical memories. For example, in a non-clinical sample, concrete/imagery-based processing during exposure to analog trauma resulted in smaller negative affective impact at posttest and fewer intrusions in the following week than abstract/verbal processing (17). Thus, autobiographical memory disturbances in depression might also be interpreted as an imagery problem (18). In sum, recalling an aversive autobiographical memory in a more “ruminative” or in a more imagery-based manner may differentially influence its emotional impact and contribute to the onset and maintenance of depression.

The study included an observational and an experimental part. In the observational part, it was investigated how spontaneous use of the three processing modes (state measures of abstract verbal, concrete verbal, and imagery-based processing) and trait measures of rumination and imagery-based processing were associated with the impact of aversive autobiographical memory recall on negative and positive affect. In the experimental part, the causal effect of processing modes on affective impact was investigated by experimentally manipulating the processing mode (abstract verbal versus concrete verbal versus imagery) during retrieval of the same aversive autobiographical memory. How manipulations influenced affective impact during future recall of the memory was assessed at a follow-up assessment of the memory.

A sample size of 33 per group (99 in total) was predetermined. Ninety-nine undergraduates (66 females) with a mean age of 21.4 (SD = 3.4) participated in exchange for remuneration. All students over the age of 18 could partake; there were no exclusion criteria. No data on ethnicity or socioeconomic status were collected. Typically, these samples include a majority of Caucasian students. Participants provided written informed consent and were fully debriefed afterward. Ethical approval was obtained from the University of Groningen Ethical Committee of the Psychology Department (13231-N).

To measure affect, participants completed the sentence “at this moment, I feel…” by rating eight affect adjectives on 0–100 visual analog scales running from “not at all,” to “entirely.” A wide range of emotions was included to capture the various emotional responses to aversive autobiographical memories (24). A negative affect (NA) scale was created by averaging the scores in response to the adjectives nervous, anxious, sad, down, angry, and irritated. The positive affect (PA) scale consisted of the average score of the adjectives happy and content.

State concrete verbal processing was operationalized as a 2-item scale, assessing to what degree participants thought in words and sentences [e.g., Ref. (20)].

A 4-item state imagery-based processing scale was based on assessment of the use of sensory channels, assessing to what degree during recall participants saw, heard, smelled, and felt the sensory properties of the memory. Because smell was reported by less than half of the participants, it was not included in the imagery measure. All items were presented on 0–100 visual analog scales (which ran from “not at all” to “completely”).

Self-report measures of trait levels of depressive rumination and imagery-based processing were assessed.

Trait rumination was assessed using the brooding subscale, a short scale (5 items) to measure maladaptive rumination, of the Ruminative Response Scale [RRS; (25); Dutch version (26)]. The internal consistency of this subscale in the current sample was questionable (α = 0.66).

Trait imagery-based processing was assessed using the 12-item Spontaneous Use of Imagery Scale [SUIS; (27)]. This questionnaire was translated to Dutch and backtranslated to English and compared to the original by a bilingual expert. The internal consistency in the current sample was acceptable (α = 0.71).

Depressive symptomatology was assessed using the Inventory of Depressive Symptomatology (IDS-SR; 28, 29). This 30-item self-report version of the questionnaire covers all diagnostic criteria for major depressive disorder as formulated in the DSM-IV (30). Participants indicated to what degree each symptom applied to them in the last 7 days on a 4-point scale (0–3). Total scores range from 0 to 84. The psychometric properties are acceptable (29), with a good internal consistency in the current sample (α = 0.84).

Manipulation was performed using three instructions for each processing mode. The first instruction was presented at the start, the second after 20 s, and the third after 40 s of recall. These manipulations were derived from previous studies (20, 21, 31) and altered to differentially manipulate abstract verbal, concrete verbal and imagery-based processing while keeping all other aspects of the manipulations the same.

The instructions in the abstract verbal condition were to “think about why the event occurred,” “think about the deeper meaning of the event,” and “think about how this event has influenced you.”

The instructions in the imagery condition were “recall the memory with your mind’s eye. Try to recall the smells, sounds, and sensations as well,” “see what is happening in your memory,” and “see the colors and others details in the memory.”

Selection of an Aversive Autobiographical Memory 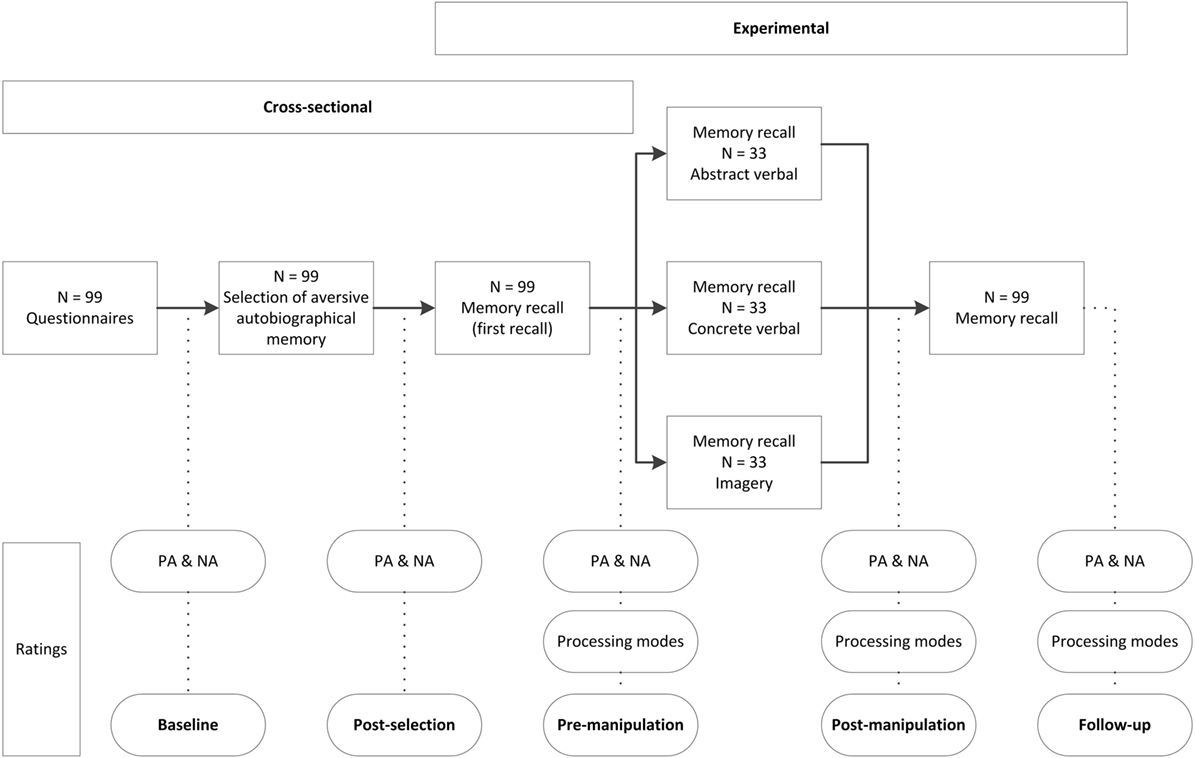 Figure 1. Overview of study procedure of the observational and experimental part of the study.

Participants were free to choose whether they preferred to close their eyes during recall of memories or to keep their eyes open, but were instructed to remain consistent in doing so during recall throughout the experiment. The duration of the entire procedure was around 45 min per participant.

Table 1. Correlations between state and trait processing mode measures, depressive symptomatology and affect at baseline, and change in affect between baseline and first recall (pre-manipulation). 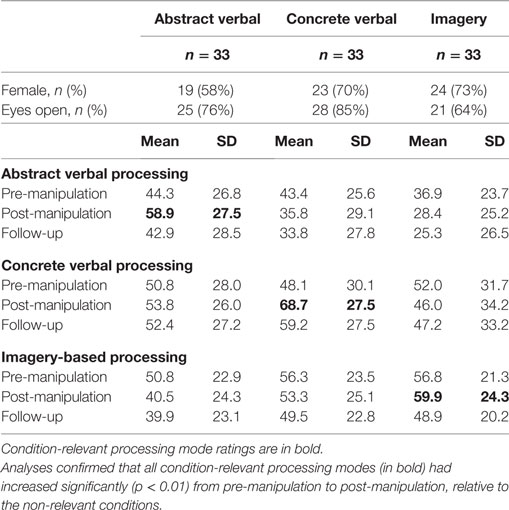 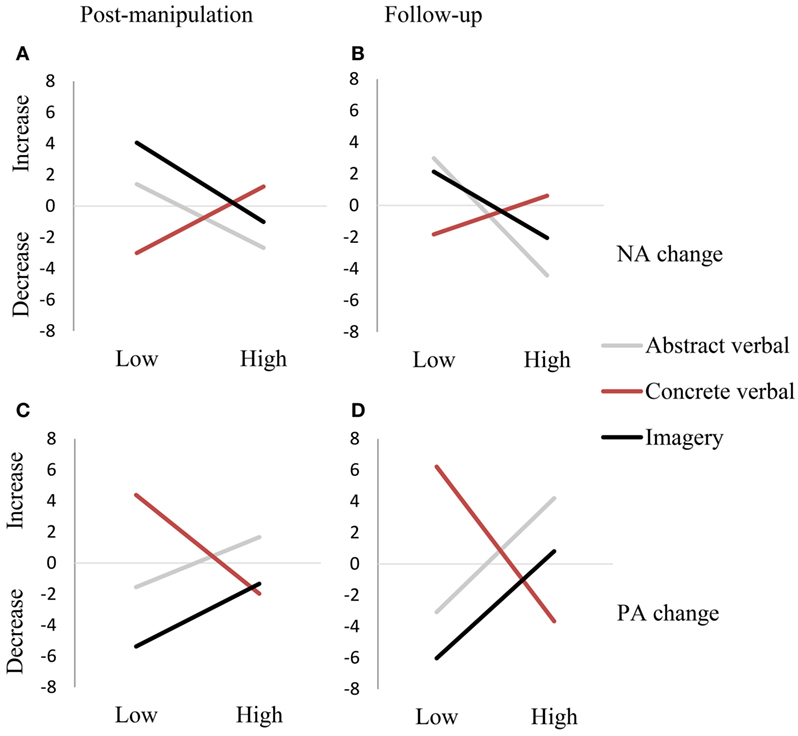 Figure 2. Inspection of the three-way interaction (time × condition × depressive symptomatology), depicting change over time using a median split for depressive symptomatology for negative affective change at post-manipulation (A) and at follow-up (B) and for positive affective change at post-manipulation (C) and at follow-up (D).

Some limitations should be noted. First, the time-course of this study was limited as post-measurement took place after manipulation without delay. In future studies, longer follow-up assessments of potential beneficial effects of concrete or imagery-based processing should be included, such as increased specificity of recall of positive memories (14). Second, the manipulation was moderate in strength. A stronger manipulation, possibly including an imagery practice task [e.g., Ref. (19)], would potentially have yielded more pronounced effects. Third, the effects in the experimental conditions can only be interpreted as relative to the other processing modes, because no neutral control condition was included in the design. Selection of a suitable neutral control condition in this design was complicated, given that distraction may also reduce rumination and negative affect (35, 36), and no instruction would not prevent individuals from further processing of the aversive memory in their habitual manner. Finally, the range of depressive symptomatology was restricted because the study was conducted in a non-clinical sample [which is common in this type of research, e.g., Ref. (19–21)]. Using a clinically depressed comparison group is recommended for future research, as it would have allowed for a comparison of levels and effects of processing modes between healthy and depressed individuals. The finding that the causal influence of processing modes on affective impact was only observed in individuals with low levels of depressive symptomatology highlights the need to examine how findings from non-clinical samples generalize to clinical samples of (previously) depressed individuals.

CS, ME, CB, and MN designed the study; CS acquired and analyzed the data; CS and ME wrote the first draft of the article; CS, ME, CB, EH, and MN contributed to the interpretation of the results and the writing of the manuscript. All authors have approved the final manuscript.

This research was funded by grant 022.003.038 from NWO (http://www.nwo.nl/) the Netherlands Organisation for Scientific Research, awarded to the Dutch-Flemish Research School Experimental Psychopathology.

The Supplementary Material for this article can be found online at https://www.frontiersin.org/article/10.3389/fpsyt.2017.00082/full#supplementary-material.

Copyright: © 2017 Slofstra, Eisma, Holmes, Bockting and Nauta. This is an open-access article distributed under the terms of the Creative Commons Attribution License (CC BY). The use, distribution or reproduction in other forums is permitted, provided the original author(s) or licensor are credited and that the original publication in this journal is cited, in accordance with accepted academic practice. No use, distribution or reproduction is permitted which does not comply with these terms.