Methods: A cross-sectional survey of PTB patients from three hospitals in Liaoning, China, was conducted using a structured questionnaire. Depression and anxiety were evaluated by using the Hospital Anxiety and Depression Scale (HADS) and the Patient Health Questionnaire-9 (PHQ-9).

Conclusion: Depressive and anxiety symptoms are common among PTB patients, especially those with TBTB. Screening for depression and anxiety is essential for identifying patients who require further psychosocial assessment and support.

Tuberculosis (TB) remains one of the world's deadliest communicable diseases. In 2014, ~9.6 million people (5.4 million men, 3.2 million women, and 1.0 million children) developed TB, and 1.5 million (890,000 men, 480,000 women and 140,000 children) died from TB. China has both a high TB burden and a high multidrug-resistant TB burden1. Patients with TB may suffer from mental disorders as a result of long-term treatment, anti-TB drug side effects and TB relapses (1, 2). Anxiety and depression are common mental disorders and global public health concerns. The World Health Organization (WHO) estimates that more than 350 million people suffer from depression and that almost 1.0 million people take their own lives each year2. However, most people with mental health problems who live in low- or middle-income countries are undiagnosed or improperly treated (1, 3). It is well known that the prevalence of depression is high among people with chronic diseases (4–8), and several studies have reported that psychiatric morbidities are common in TB patients (1, 2, 9, 10). Depression is associated with poor treatment adherence in patients with chronic diseases. Poor treatment adherence may lead to irregular treatment and lower treatment success rates (6). Previous studies reported that the prevalence of depression in patients with pulmonary tuberculosis (ranging from 13.5 to 72%) was higher than that in the general population (2, 11–15). However, little is known about the prevalence of anxiety and depression among TB patients in China, and little is known about whether tracheobronchial tuberculosis (TBTB) influences symptoms of anxiety or depression. Studies also suggested that the identification rate of depression was underestimated in a general hospital in China (16). The present study aimed to evaluate the prevalence of and factors associated with depressive and anxiety symptoms among TB patients with and without TBTB in Liaoning Province, China and to evaluate whether TBTB is a risk factor for depressive symptoms and/or anxiety symptoms.

A cross-sectional survey was conducted to describe anxiety and depression states and the social factors among pulmonary tuberculosis (PTB) patients with and without TBTB.

This study was conducted in three hospitals in Liaoning Province, China, that care for patients with TB.

We recruited PTB patients who were inpatients and newly diagnosed or were undergoing treatment via directly observed therapy (DOT) between May 2014 and October 2015 for this study. All patients underwent bronchoscopy. Patients with drug resistance; patients with simple extra-pulmonary TB without PTB; patients aged < 18 years; patients who were pregnant, were critically ill, or had communication problems; and patients with severe illnesses, such as cancer, were excluded from this study. We finally enrolled 1252 patients in the study. All cases of PTB were diagnosed according to microbiological testing, and all diagnoses of tracheobronchial tuberculosis were confirmed via bronchoscopy. The diagnosis of TBTB was confirmed via bronchoscopy and histology, as well as microbiological testing (tissue biopsy and/or brushing sample cultures for MTB) (17). We divided patients with TBTB into 7 subtypes based on bronchoscopic manifestations: caseating, edematous-hyperemic, fibrostenotic, granular, tumorous, ulcerative, and non-specific bronchitis (17). Additionally, airway stenosis was classified into five grades according to the decrease in the cross-sectional area of the airway: grade 1(< 25%), grade 2 (25–50%), grade 3 (50–75%), grade 4 (75–90%), and grade 5 (90–100%) (18).

Consecutive PTB patients admitted to three hospitals who met our inclusion criteria were enrolled in this study. Data were collected using a structured questionnaire administered by data collectors. These data collectors were doctors practicing at the abovementioned hospitals and were provided uniform training to conduct standardized interviews and collect data. The structured questionnaire was designed to collect information regarding socio-demographic factors, such as demographics, body mass index (BMI), educational level, occupation status, marital status, monthly income, family history, smoking status, alcohol consumption, comorbidities, TB symptoms, and other social factors. The Hospital Anxiety and Depression Scale (HADS) and the Patient Health Questionnaire-9 (PHQ-9) were included in the questionnaire to evaluate patient depressive and anxiety symptoms. The modified Medical Research Council (mMRC) Dyspnea Scale was used to evaluate dyspnea severity. All the scales were the Chinese versions, which were valid and efficient tools for screening for depression and anxiety (19–21). Patient information pertaining to treatment was collected from the medical databases of the health facilities to which the patients were admitted.

Depression was assessed using the nine-item PHQ-9, a self-administered version of the PRIME-MD diagnostic instrument for common mental disorders. The PHQ-9 consists of 9 questions based on the DSM-IV diagnostic criteria for depressive disorders. Each of these nine items can be scored as 0 (not at all), 1 (several days), 2 (more than half of the days), or 3 (nearly every day). The total score on the questionnaire ranges from 0 to 27. PHQ-9 scores can be dichotomized using a cut-off score of 10, which has a high sensitivity and specificity for the diagnosis of depression (23, 24). The PHQ-9 tool has been demonstrated to be widely useful for assessing patients, including TB patients, for depressive symptoms (25–27). Thus, PHQ-9 scores of 10 or above are considered indicative of probable “caseness” for depression.

We assessed dyspnea severity using the mMRC dyspnea scale, which consists of five dyspnea severity grades ranging from none (grade 0) to almost complete incapacity (grade 4): Grade 0 (I only get breathless with strenuous exercise); Grade 1 (I get short of breath when hurrying on the level or walking up a slight hill); Grade 2 (I walk slower than people of the same age on the level because of breathlessness, or I have to stop for breath when walking on my own pace on the level); Grade 3 (I stop for breath after walking ~100 meters or after a few minutes on the level); Grade 4 (I am too breathless to leave the house or I am breathless when dressing or undressing) (28).

Normally distributed data are reported as the means ± standard deviation, and comparisons between groups were conducted using Student's t test or the Mann-Whitney U test as appropriate. χ2-tests were used to compare proportions between groups. Odds ratios (ORs) pertaining to the relationships between risk factors and outcomes (anxiety or depression) along with their corresponding 95% confidence intervals (95% CIs) were calculated. Variables that were considered risk factors for anxiety and depression (p < 0.1) were entered into a multivariate logistic regression model to calculate the ORs and their confidence intervals. P-values < 0.05 were considered significant. All statistical analyses were performed using Statistical Package for Social Sciences (SPSS) version 17.0 for Windows (SPSS Institute Inc., Chicago, Illinois, USA).

Ethical approval was obtained from the Institutional Ethical Review Board of the First Hospital of China Medical University, Shenyang, China. In addition, research permission was obtained from each hospital. All patients provided written informed consent to participate in this study. We suggested that the patients with depressive and anxiety symptoms undergo further evaluation at the department of mental disease.

Prevalence of Depressive and Anxiety Symptoms Among TB Patients 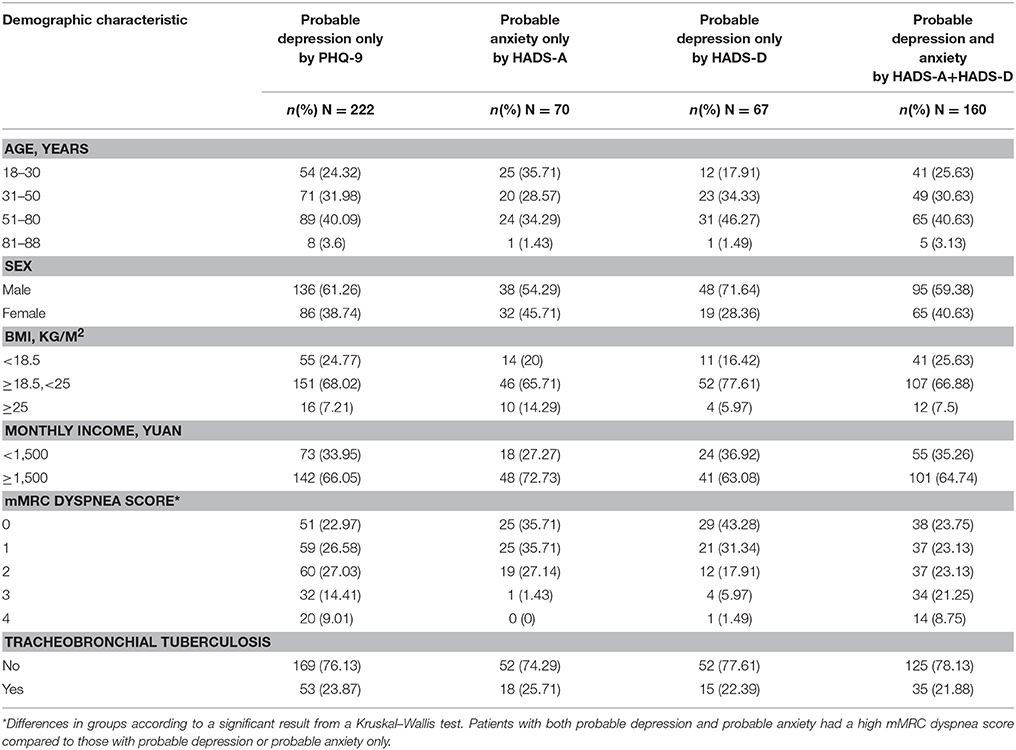 Factors Associated With Depressive Symptoms According to the Different Diagnostic Scales 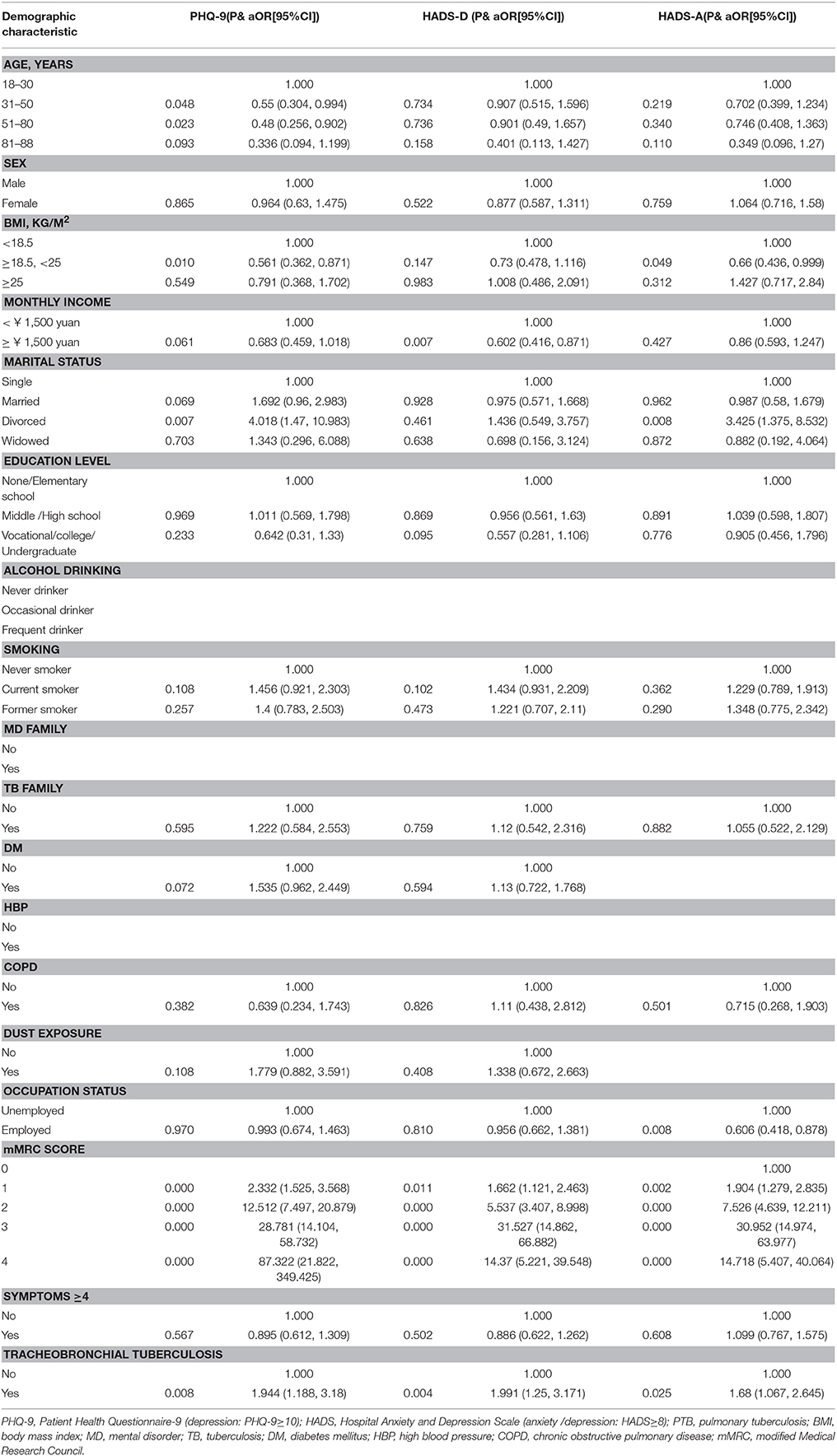 Comparative Analysis of TB Patients With and Without TBTB

Two depression screening scales (HADS and PHQ-9) demonstrated that TB patients with TBTB were more likely to suffer from probable depression than were TB patients without TBTB. The ORs pertaining to the risk of depressive symptoms in these groups of patients were 1.451 and 1.656, respectively. Moreover, TBTB was significantly related to anxiety symptoms, according to the HADS (Table 4).

Table 4. Comparative analysis of TB patients with or without TBTB. 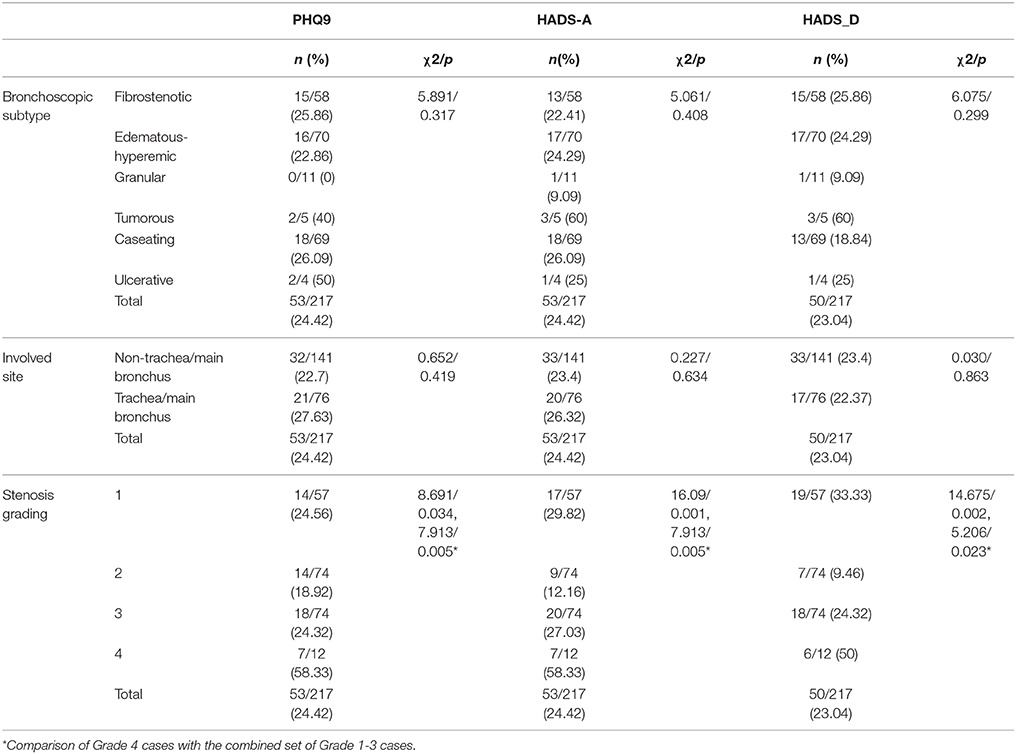 Table 6. The impact of Interventional therapy on prevalence of depression and anxiety symptoms among TBTB patients with central airway involvement.

In addition, interventional pulmonology treatments for TBTB may be associated with mental health. We found that treated patients had a lower incidence of anxiety and depressive symptoms than the untreated group among TBTB patients with central airway involvement, which may result from the fact that the interventional treatment can relieve the symptoms of dyspnea.

Additional studies regarding the risk factors for depressive symptoms among TBTB patients are necessary. Once the diagnosis of TBTB has been confirmed, clinicians should pay attention to the mental statuses of patients and assess patients for symptoms of anxiety and depression.

Some limitations of this study should be mentioned. First, as this was a cross-sectional study, we cannot exclude the possibility that our results were affected by recall bias such as a family history of mental disorders and tuberculosis which may under-estimate those factors. Furthermore, a comparison of our results to healthy controls was not possible due to the absence of a control group. Because not all the participated hospitals having department of mental disorder and only used screening questionnaires for anxiety and depression, our study only evaluated the prevalence and risk factors of probable anxiety and depression. But our study still offered valuable information for further study in this field. Finally, cross-sectional surveys can demonstrate associations but cannot demonstrate temporal sequences of events, which may raise concerns regarding the directions of causality between risk factors and depression in patients with TB (39).

Our study determined the prevalence of and factors associated with depressive and anxiety symptoms among PTB patients in Liaoning Province, China. As depressive and anxiety symptoms are common among PTB patients, especially those with TBTB, screening for depression and anxiety can identify patients who require further psychosocial assessment, support and treatment to experience a better clinical response to anti-TB treatment.

This research was supported by grant LT2013015 from the Department of Education of Liaoning Province, China.

Copyright © 2018 Wang, Li, Zhang, Zhang, Chen, Xu, Fu, Wang, Kang and Hou. This is an open-access article distributed under the terms of the Creative Commons Attribution License (CC BY). The use, distribution or reproduction in other forums is permitted, provided the original author(s) and the copyright owner(s) are credited and that the original publication in this journal is cited, in accordance with accepted academic practice. No use, distribution or reproduction is permitted which does not comply with these terms.