Lifelong medication, risk of various complications, and heavy care burdens result in psychosocial stress in patients with diabetes mellitus, which is detrimental to mental health and often lead to depression (1). About 30% of diabetes patients experience varying degree of depression (2, 3), and therefore have worse outcomes (4, 5). The pathological mechanisms underlying depression are complex and still not fully understood. Abnormity of catecholamine neurotransmitters in the brain have been considered the primary cause of depression, Levels of 5-hydroxytryptamine (5-HT), noradrenaline (NE), and dopamine (DA) are generally reduced in patients with depression (6). Neuroinflammation is also associated with the occurrence and development of depression (7). Recently, evidences suggested that depression might be related to carbohydrate and energy metabolism abnormity (8, 9).

Since diabetes mellitus itself is a chronic metabolic disease (10), depression co-morbid is speculated to affect the abnormal metabolome in diabetics, and to increase cardiovascular complication risk (11, 12). Accordingly, early diagnosis of depression comorbidity is of importance in diabetes management. However, early identification of depression is difficult in clinical practice due to its complex etiology (13).

Metabolomics is a top-down systems biology approach for studying the metabolic responses of living systems to genetic or environmental stimuli (14, 15). It has been increasingly used to diagnose diseases, in pharmacology/toxicology studies, and for the identification of biomarkers (16). Combined metabolomics and proteomics analysis was conducted to identify potential biomarkers in an animal model of depression-like behavior (17, 18).

Among the analytical platforms of metabolomics, LC-MS is recognized as one of the best powerful tools in sensitivity, selectivity and reproducibility (19, 20). Meanwhile, LC-MS has increased the number of lipid classes that can be analyzed, it can separation and identification trace components of complex mixtures (21). So now LC-MS has become a mainstay of metabolomics for metabolite identification.

The open-field test was conducted in a quiet room (22). Briefly, the Open-field consisted of an opaque plastic box (100 × 100 × 40 cm) divided equally into 33 × 33 cm2 squares. Rats were placed in the center of this field, and the number of squares rats moved and standing times were monitored using a ZS-ZFT Video Analysis System (ZSDC Science and technology Co., Ltd., China) as indexes of locomotion activity and exploratory behavior, respectively. Animals with abnormal behavior scores >120 or < 30 were removed from the experiment prior to chronic stress. 10 rats in control group and 11 in model group ultimately completed the experiment. The test lasted 5 min and was conducted before and after 8 weeks of chronic stress.

The CUMS-induced depression-like behavior model was established in GK rats (23, 24). Rats in the CUMS model group were individually housed in cages for 8 weeks with food and water ad libitum. Each rat was exposed to the following stressors in random order: restraint (activity restriction in a bottle, 1 h), hot water swimming (45°C, 5 min), cold water swimming (4°C, 5 min), clip tail (1cm from the end of the tail, 1min), cage tilting (45°, 24h), horizontal shaking (10 min), damp padding (24 h), noise interference (10 min), and day/night inversion (24 h). The same stress was not used twice continuously in a row to avoid prediction. After using 6–7 times of each stress treatment randomly, the rats were relocated to their cages. Control rats were fed normally without any stress during this period.

Before and after model establishment, blood was collected from eye can thus, kept in heparinized tubes, and centrifuged at 3,000 × g at 4°C for 5 min to obtain plasma. Plasma serotonin and dopamine levels were measured by enzyme-linked immunosorbent assay (CUSABIO, USA) according to instruction.

After model establishment, blood was collected as above, and the supernatant plasma was stored at −80°C. Rats were placed in metabolism cages and urine samples were collected every 24 h, aliquoted and stored at −80°C. All samples were then thawed for 15 min and vortexed for 5s prior to analysis. A total of 100 μL of plasma/urine sample was mixed with 300 μL of methanol, vortexed for 30 s, and left undisturbed for 20 min. After centrifugation at 12,000 × g for 15 min at 4°C, 200 μL supernatant was extracted for LC/MS assay.

LC/MS (Agilent, 1290 Infinity LC, 6530 UHD and Accurate-Mass Q-TOF/MS) were used to analyze the samples. The chromatographic separation conditions are as follows. Each sample (4 μL) was injected into a C18 column (Agilent, USA, 100 × 2.1 mm, 1.8 μm) at 4°C, and the following mobile phases were used at a flow-rate of 0.4 mL/min at 40°C: H2O with 0.1% methane acid (A) and acetonitrile with 0.1% methane acid (B). Gradient elution values are shown in Table 1. Mass spectrometry analysis was performed in V flight tube detection mode with nitrogen as the atomization cone gas in both positive and negative ion modes. The source temperature was set at 100°C, the extraction cone was at 4v, and a cone gas flow of 50 L/h was used in both modes. Capillary voltage was set at 4.0 and 3.5 kV, the sampling cone was 35 and 50 kV, the desolvation temperature was 350°C and 300°C, respectively, and the desolvation gas flow was set at 600 and 700 L/h, respectively. Mass spectrometric data was collected in centroid mode from 50 to 1,200 m/z.

The peak height for the internal standard was continuously monitored during analysis to ensure signal stability. Quality control (QC) procedures were used to validate the methods and to ensure stability. 50 μL QC samples prepared by pooling identical volumes of individual plasma sample. To ensure that the system was suitable for use, 5 pooled QC samples were run prior to analysis in each ion mode. Five ions (min_m/z) were selected to evaluate the relative standard deviation (RSD) of retention time, m/z, and peak area. The peak area RSD values of reproducibility for most of the compounds were <10%.

OPLS-DA and variable importance for projection statistics (VIP > 1) were used to select significant variables driving group separation. Metabolites were represented by chromatographic peaks in total ion current chromatograms (TICs), and identified by comparing their chromatographic retention times and MS spectra with the available references and the METLIN database. In addition, the Kyoto encyclopedia of genes and genomes (KEGG, http://www.genome.jp/kegg/) biochemical database was used to interpret possible pathways involving the identified metabolites.

Table 2. Open-field test before and after model establishment.

Table 3. Biochemical tests before and after model establishment (ng/mL).

Total ion chromatograms (TICs) were visually inspected to examine the stability and reproducibility of the instrument. The results indicate that it was functioning optimally (Figures 1A–D). Typical LC/MS TICs for plasma and urine samples from the two groups (Figures 2A–H) indicate that the analysis was highly reproducible. Quality control tests of LC/MS TICs were performed for plasma and urine samples. As shown in Table 4, RSD values for the quality control samples were all <10%, indicate that the analysis system was stable. 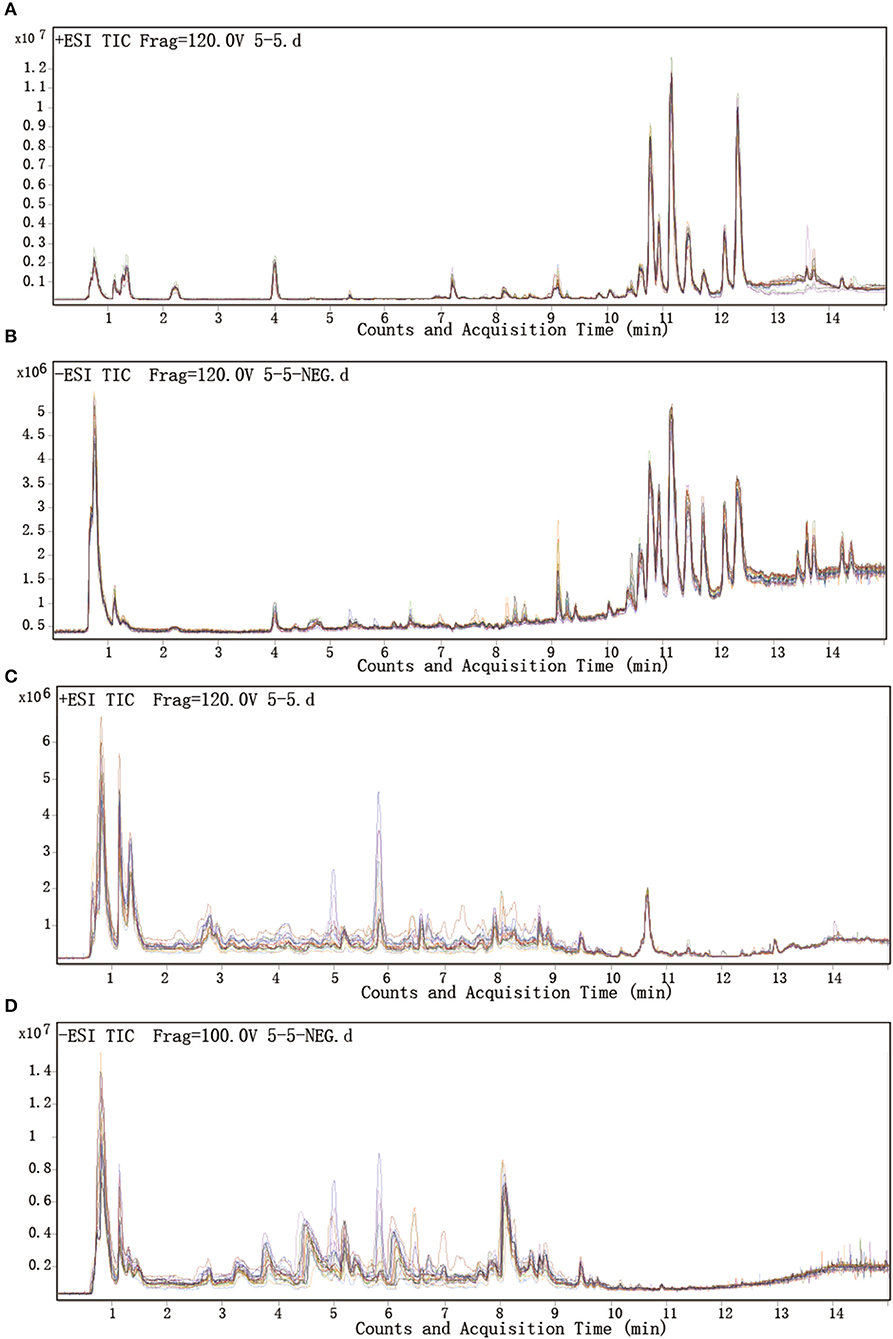 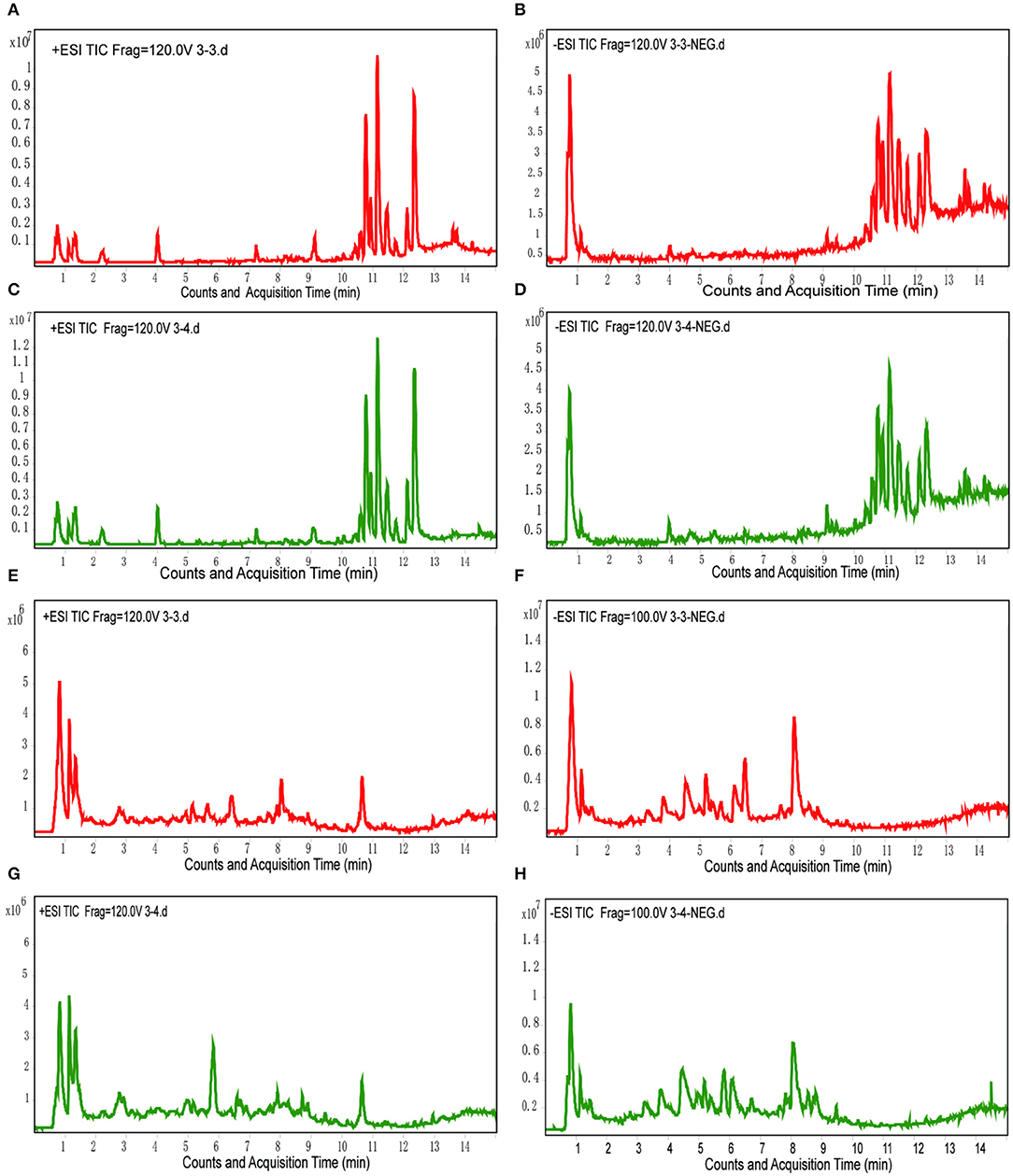 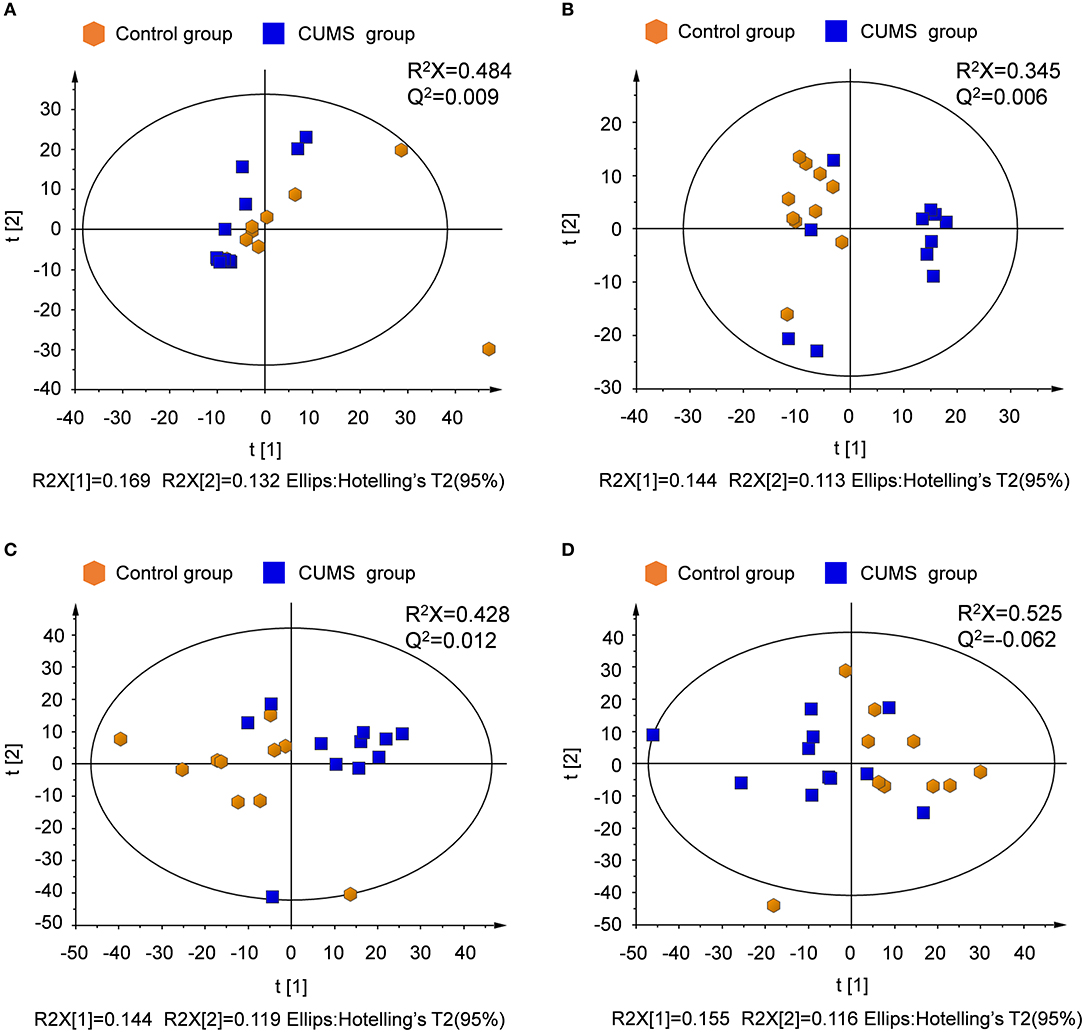 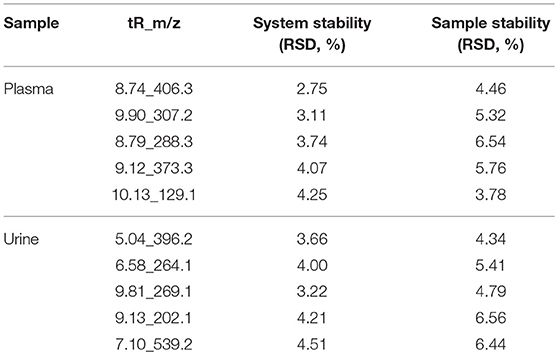 Supervised partial least squares-discriminate analysis (PLS-DA) was used to examine metabolic patterns and to detect changes in the concentration of individual metabolites in the model. Measures of the quality of the resulting discrimination, including the values of R2X, R2Y, and Q2, are shown in Figure 4. The values of R2 and Q2 were > 0.5, indicating good fitness and prediction. 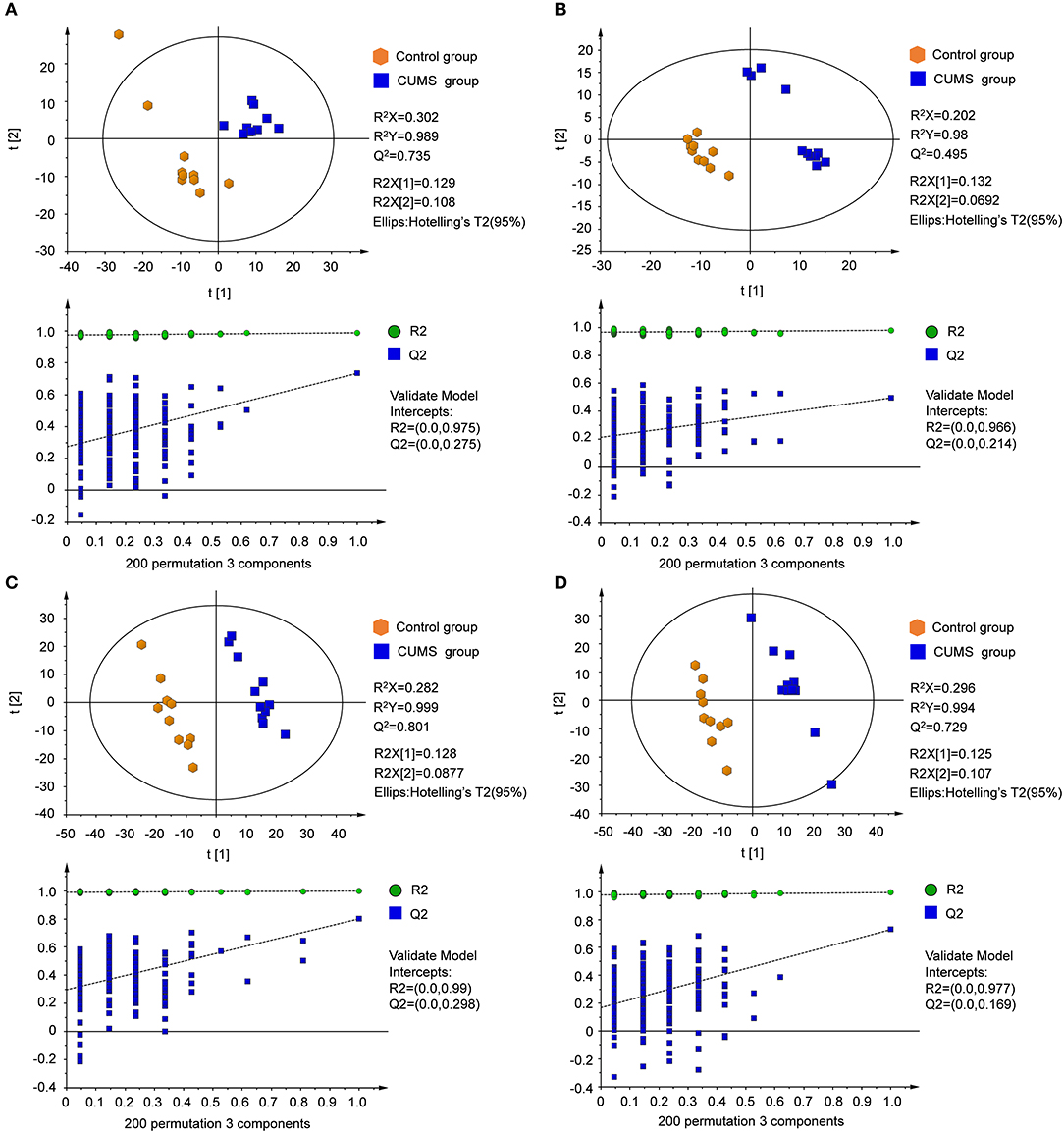 The orthogonal partial least squares-discriminate analysis (OPLS-DA) model was constructed after the PLS-DA analysis. The key model parameters are summarized in Figure 5. Results for different groups were visualized as score plots to show group clusters. S-plots were used to identify variables that contributed to the classification. Good separation between the groups was observed. 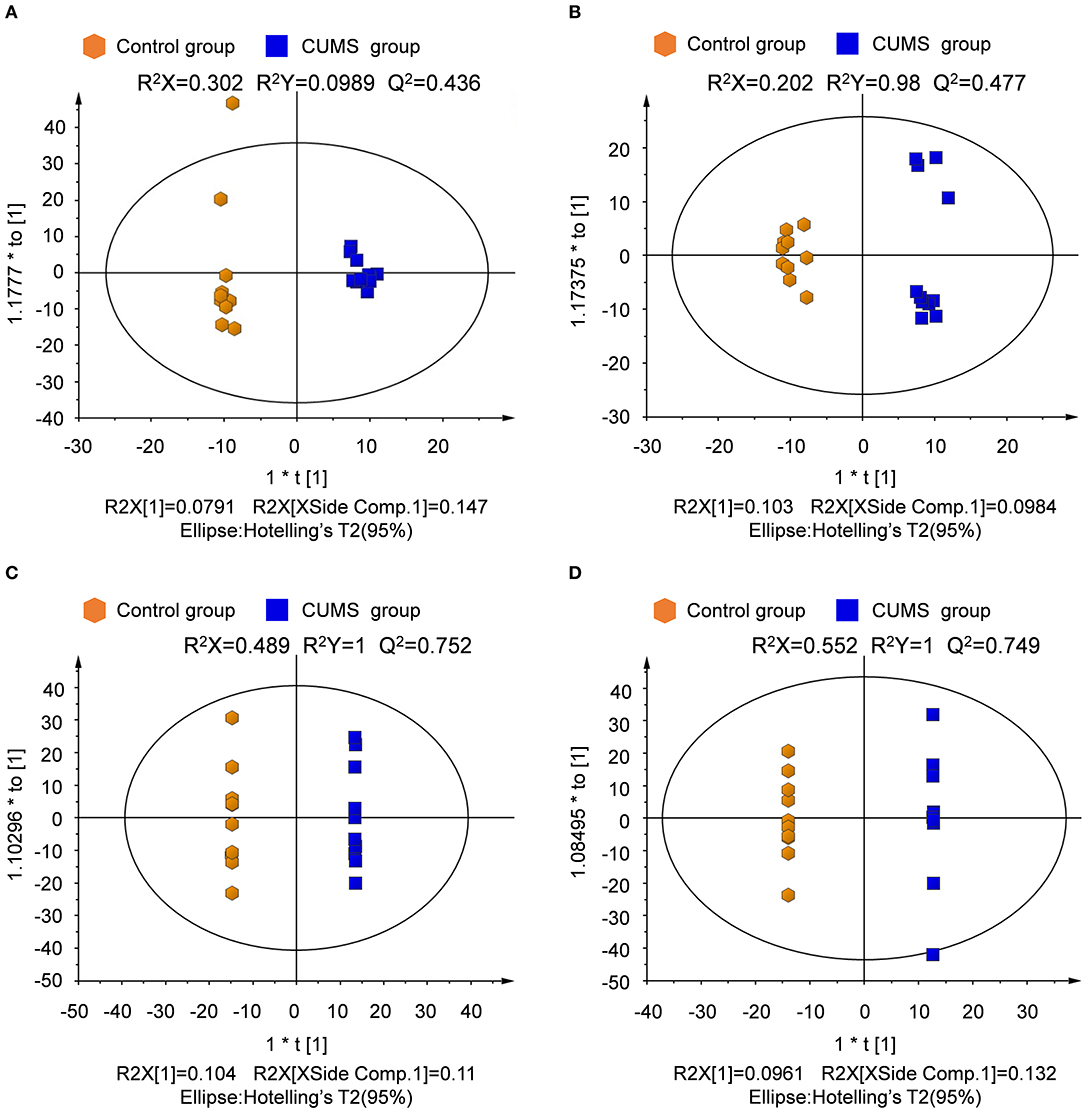 Differentially-expressed metabolites were identified based on the variable VIP with a threshold of 1.0 from the OPLS-DA model and p-value < 0.05 in the t-test. Metabolites were identified based on mass assignment and Rt-m/z and were then compared with authentic standards or database resources, such as KEGG (http://www.genome.jp/kegg/) and METLIN (http://metlin.scripps.edu). 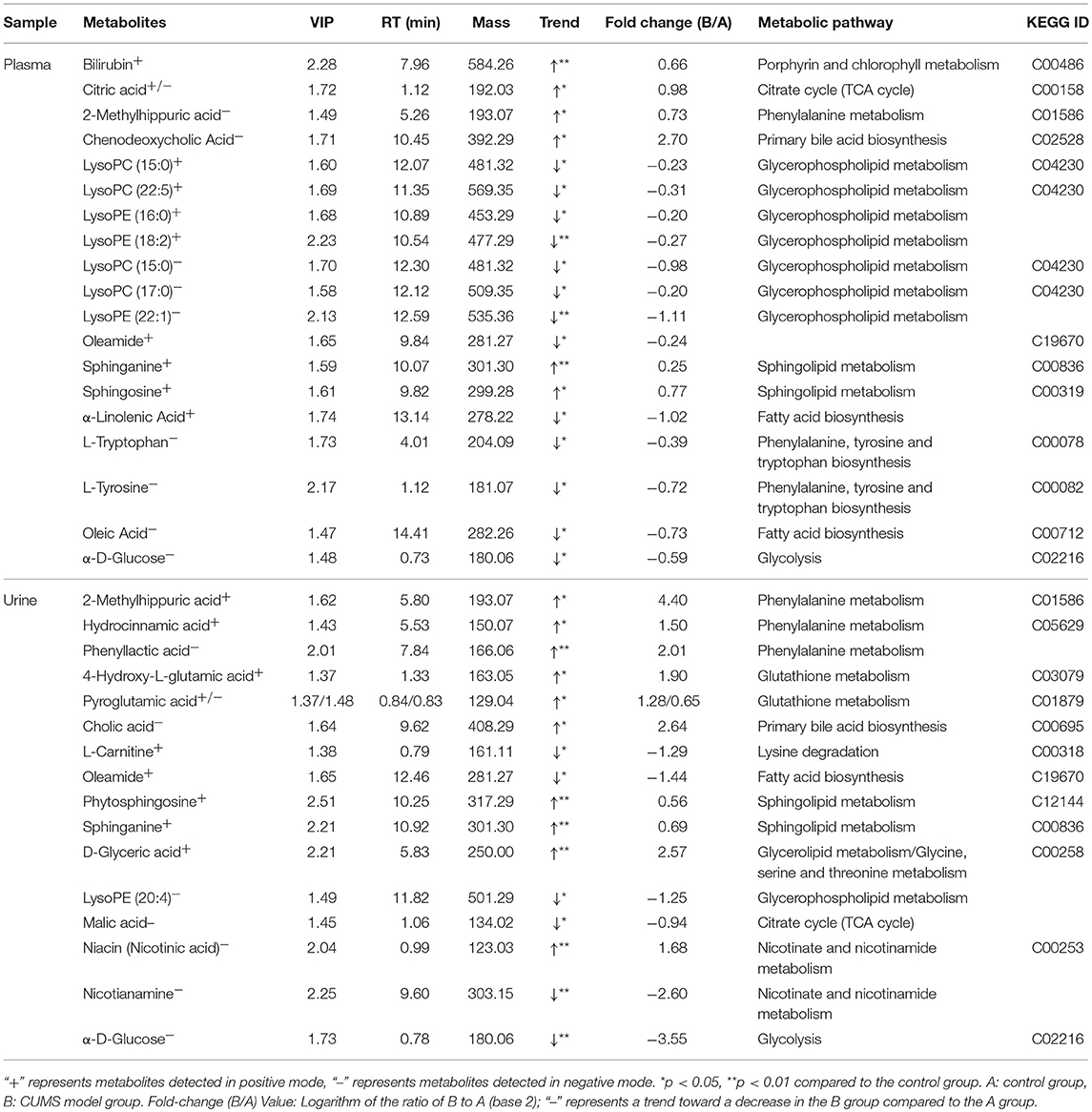 Table 5. Metabolites in plasma/urine samples that differed between the control and CUMS-induced depression groups. 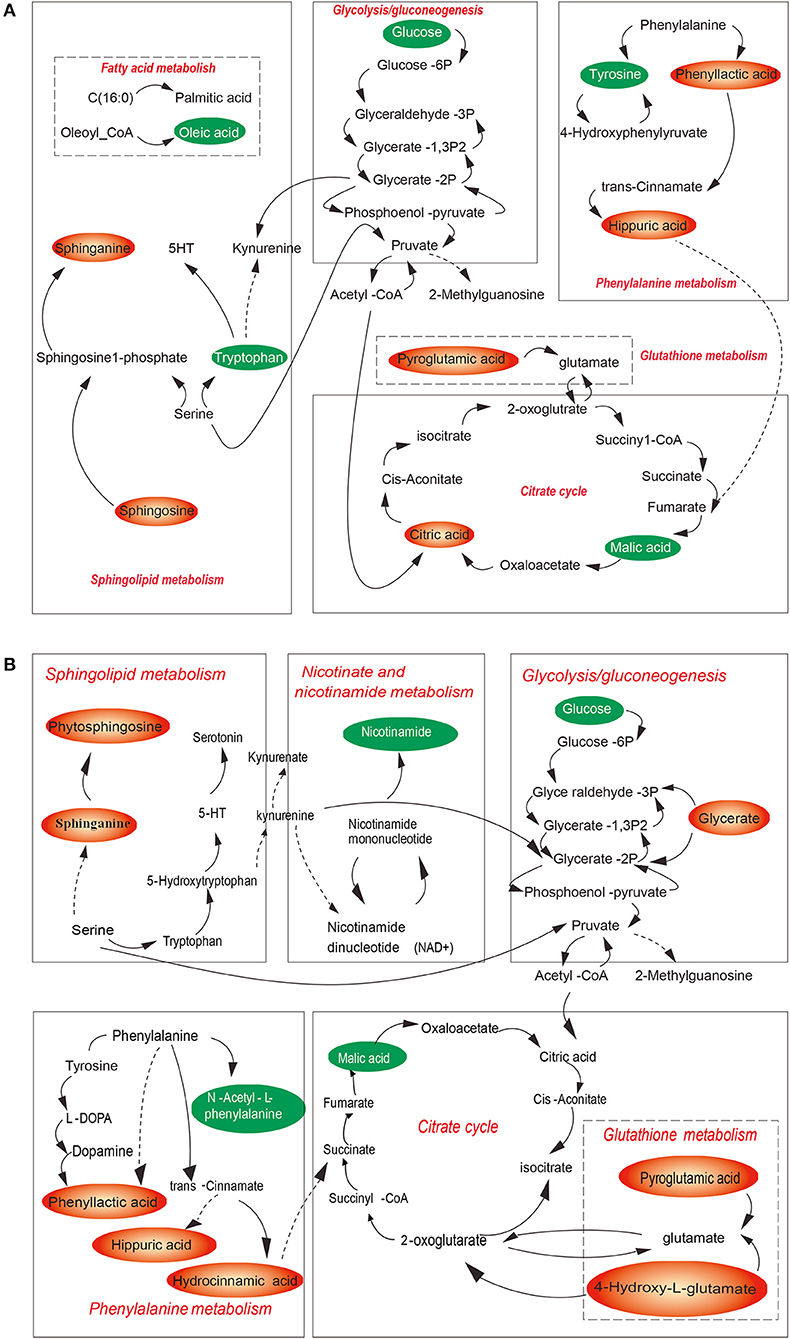 Up to now, few researches focused on the impact of chronic stress-induced depression-like behavior on blood plasma and urine metabolome in diabetes patients or in experimental diabetic rats, although metabolome analysis has been proposed for screening for depression (25, 26). In this study, we found that the disturbance in lipid/amino acid/glucose metabolism occurred in diabetes rats with depression comorbidity. We identified 20 plasma metabolites and 16 urine metabolites of GK rats with depression comorbidity. In CUMS model group, we noted with interest that lipid metabolite changes occurred primarily in blood plasma, meanwhile amino acid metabolite changes occurred primarily in urine. The different metabolites identified between plasma and urine due to the different content they have.

It is worth mentioning that among these altered metabolites, 2-methylhippuric acid was increased meanwhile oleamide was decreased both in blood plasma and in urine, respectivelty, although the biological mechanism is not clear right now. Oleamide is thought to be beneficial to enhance the conductivity of 5-HT receptors and neurons (30), meanwhile 2-methylhippuric acid is thought to be detrimental for it induces nervous system damage in vivo and leads to depression (31, 32).

In this study, chronic stress decrease plasma/urine α-D-glucose levels in diabetic rats, which was different from other reports (12, 33). This might be due to different experimental animal model. In this work only male rats were used for study. Gender also influences blood glucose levels in depression patients. Additional research is needed to examine these contradictory results.

The application of LC-MS coupled with PCA makes it possible to show the fact that the biochemical changes of CUMS induced depression-like behavior rats are obviously different from those of the normal control ones, but the mechanism is not clear. Chronic stress was known to disturb of homeostasis, and lead to psychological diseases such as depression. HPA axis with the endpoint release of corticosterone into the circulation plays an important role in mediating the neuroendocrine response to stress (34), so we supposed that the possible mechanism is that changes of metabolic profile resulted from chronic stress via the HPA axis, lead to the metabolic disorders in GK rats.

Clinical practice indicates that glycemic control in diabetes with depression could be improved by anti-depressants co-administration (35). Therefore, diagnosis and interventions as early as possible for depression comorbidity are of importance for successful diabetes management. Blood plasma and urine metabolome detection might be useful for this purpose.

We conclude that chronic stress-induced depression-like behavior may further disturb diabetes-itself energy metabolome. The plasma and urine lipid metabolites monitor may be useful for early detection of depression in patients with diabetes mellitus.

TZ and FX conceived and designed the projects. YR, CY, ZL, ZY, ZX, and JD performed the experiments and carried out data analysis. YR and CY drafted the article, TZ and FX finalized the paper and provided suggestions to improve it.

3. Al-Asadi AM, Klein B, Meyer D. Multiple comorbidities of 21 psychological disorders and relationships with psychosocial variables: a study of the online assessment and diagnostic system within a web-based population. J Med Internet Res. (2015) 17:e55. doi: 10.2196/jmir.4143

Copyright © 2018 Ren, Yang, Li, Yang, Xiao, Duan, Zhou and Xu. This is an open-access article distributed under the terms of the Creative Commons Attribution License (CC BY). The use, distribution or reproduction in other forums is permitted, provided the original author(s) and the copyright owner(s) are credited and that the original publication in this journal is cited, in accordance with accepted academic practice. No use, distribution or reproduction is permitted which does not comply with these terms.