Background: Repetitive transcranial magnetic stimulation (rTMS) is a safe and efficacious technique to stimulate specific areas of cortical dysfunction in several neuropsychiatric diseases; however, it is not known whether high-frequency rTMS (HF-rTMS) over the left inferior parietal lobule, in low functioning children with autism spectrum disorder (ASD), improves core symptoms.

Results: Participants showed a significant reduction in language- and social-related symptoms measured by ATEC from pretreatment to the 6-week follow-up after the second treatment course. Moreover, some possible improvements in imitation and cognition were reported by caregivers.

Conclusions: Our findings suggest that HF-rTMS over the left parietal cortex might improve core deficits in low-functioning children with ASD.

Autism spectrum disorder (ASD) is characterized by deficits in social communication and stereotyped behaviors (1). Despite the spectrum’s extreme heterogeneity, deficits in social cognition, including reduced social responsiveness, difficulty interacting with others, and recognizing others’ intentions and emotions, are core features of ASD (1).

Dysfunction of the mirror neuron system (MNS) has been postulated in the pathophysiology of ASD (2). Mirror neurons are visuomotor cells that discharge not only when an individual performs a particular action but also when a similar action is observed (2, 3). The mirror neuron system (MNS) enables individuals to interpret motor acts of others and promotes the development of social cognition, such as emotion and empathy (3). Besides, MNS facilitates motor coordination and participates in memory, speech, and action planning (3–5).

MNS predominantly comprises the inferior frontal gyrus, inferior parietal lobule (IPL), and posterior superior temporal sulcus (6). Recent studies suggest that a dysfunction of the MNS might generate social and cognitive impairments related to ASD (7). It has been found that motor neurons of the IPL can code motor goals (8) and process the congruence between the executed and the observed motor act (8, 9). It has also been demonstrated that any damage to the parietal cortex affects the imitation or understanding of an observed action (10). Therefore, IPL is a likely neurobiological target for the treatment of ASD.

Repetitive transcranial magnetic stimulation (rTMS) offers a noninvasive approach for modifying cortical excitability. It potentially evokes a short-term functional reorganization in the brain (11). Effects of rTMS are not limited to the primarily stimulated cortex, because of anatomical and functional connections of cortical regions within a distributed network (11–13). Studies have suggested that low-frequency rTMS (<1 Hz) decreases cortical excitability, whereas HF-rTMS (>5 Hz) increases it (14, 15). Neuroenhancement of MNS in typically developing individuals has been reported using high-frequency (20 Hz) rTMS (HF-rTMS) (16).

A limited number of research studies have evaluated the therapeutic effects of rTMS in ASD. For example, it has been reported that applying low-frequency rTMS to the dorsolateral prefrontal cortex causes a reduction in stereotypical behaviors (17). Stimulation of IPL, however, has not been undertaken in ASD. Moreover, few studies investigated the effects of rTMS in children with ASD and intellectual disability. In the present study, we examined the effects of HF-rTMS on IPL in autism associated with severe intellectual disability. We hypothesized that HF-rTMS application to IPL would result in improvements in social functioning.

Thirteen participants with ASD (age range 3–12 years) were recruited from Xuanwu Hospital, Capital Medical University, Beijing, China. Diagnosis was made by an experienced physician according to the Diagnostic and Statistical Manual of Mental Disorders, Fifth Edition (DSM-V) (1), and further confirmed with the Autism Diagnostic Interview–Revised (ADI-R) (18) and Autism Behavior Checklist (ABC) (19), administered by physicians trained to clinical reliability. Cases with a personal and family history of seizure, the presence of metal implants, were excluded. No subjects were on psychotropic medications. All 13 participants had IQ <70 measured by the Wechsler Intelligence Scale for Children, Fourth Edition (WISC-IV) (20). Two patients withdrew from the study during the first course of the treatment due to family reasons. The data of these two individuals were excluded in the final sample. Participant information is summarized in Table 1. 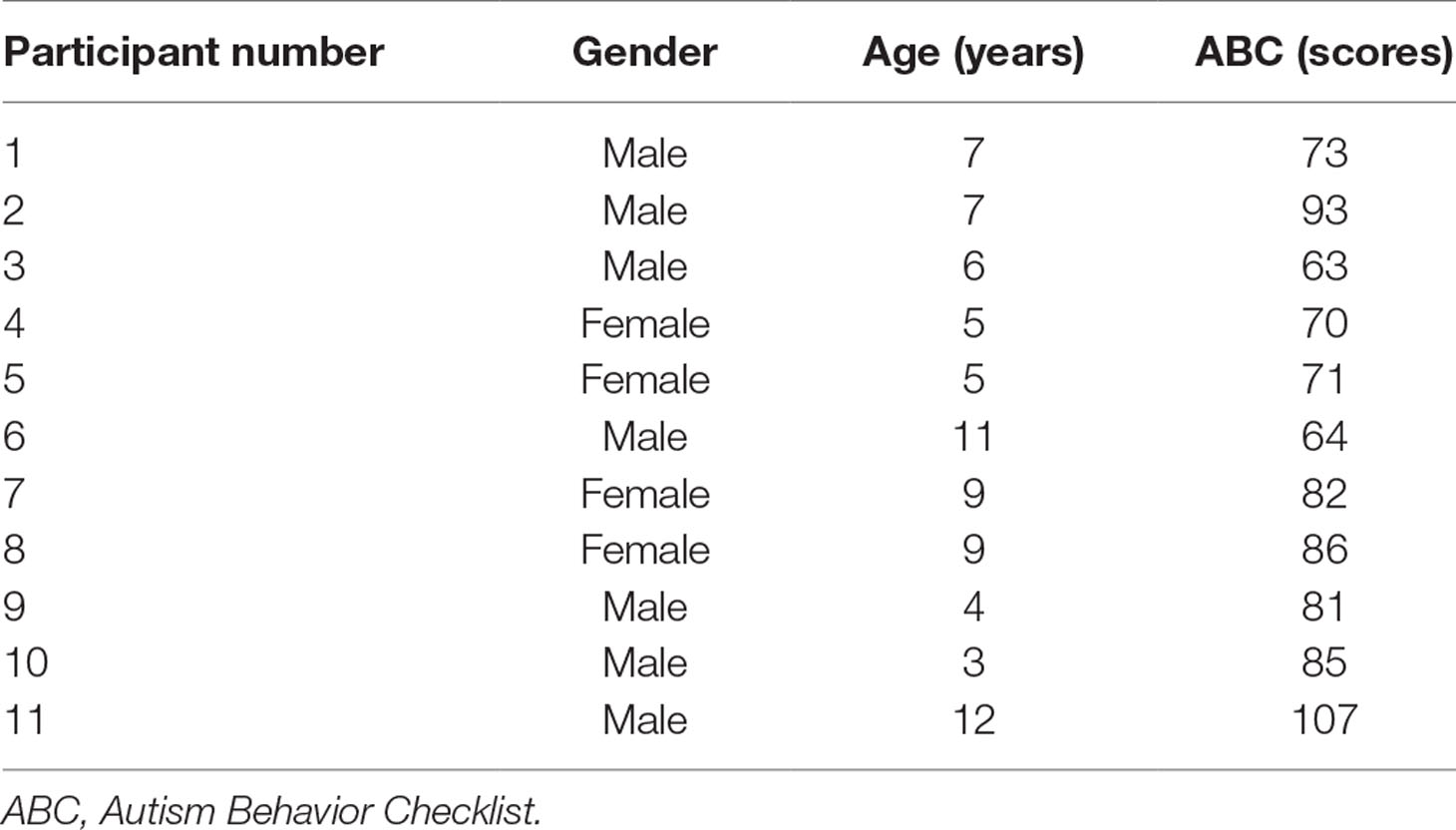 This study had the approval of the ethics committee of Xuanwu Hospital, and all participants’ parents provided written informed consent before the study.

A Magstim Super Rapid stimulator (The Magstim Company Ltd., Whitland, UK) connected to a 70-mm figure-of-eight coil was used to perform rTMS. The stimulation was applied on the left IPL [electrode P3 on the electroencephalography (EEG) cap] (21). Participants completed two separate courses that were 6 weeks apart. Each treatment course consisted of five 5-s trains at 20 Hz, with 10-min intertrain intervals, each consecutive weekday for a 3-week period (15 treatments per course). Because most participants could not participate in motor threshold assessments, we referred to the resting motor thresholds (RMT) measured in children (7–13 years old) with Tourette syndrome and children (8–13 years old) with attention deficit hyperactivity disorder in our laboratory. RMT of these children mostly ranged from 40% to 50%. Thus, the stimulation intensity was set uniformly at 50% of stimulator output.

Moreover, we monitored any side effects during the stimulation courses and instructed caregivers to report any side effects they noted during and after treatment. The protocol flow diagram is shown in Figure 1.

Statistical analysis was completed using Statistical Product and Service Solutions (SPSS) software (version 19.0, SPSS Inc., IL, USA). A P value <0.05 was considered significant for all analyses. One-way ANOVA with repeated measures was used to examine differences in the effects of HF-rTMS on the four ATEC scale scores, as well as VerBAS scores among different time points (pre-1 vs. post-1 vs. pre-2 vs. post-2 vs. 6wl). Bonferroni correction was used to adjust P values in post hoc analyses. 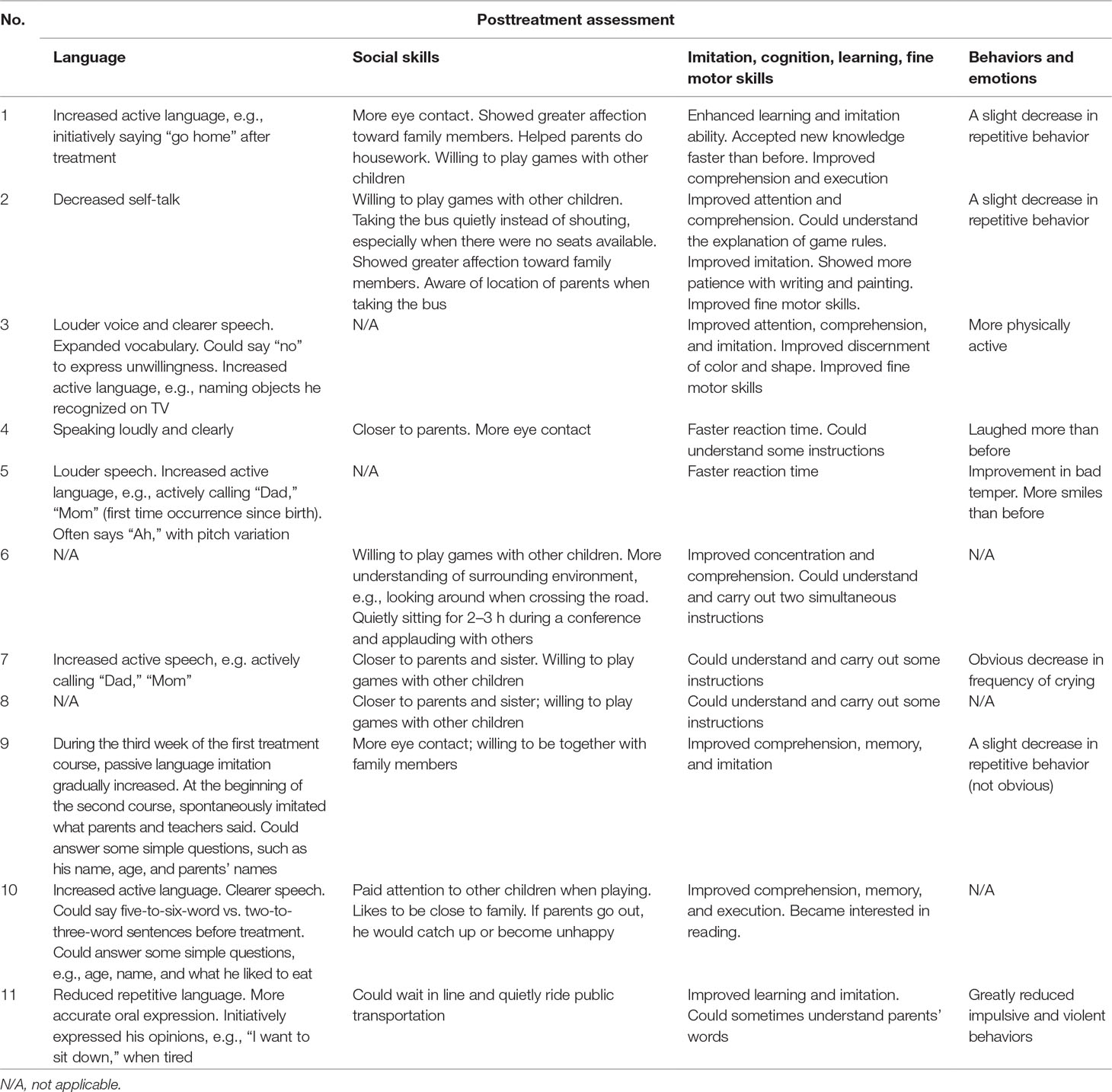 Table 4 Improvements in the quality of life of 11 participants, following HF-rTMS treatments. Records from caregiver’s logbooks.

This study provides preliminary evidence for the effectiveness and safety of HF-rTMS over the left IPL as a treatment option to improve core symptoms in low-functioning autism. Specially, HF-rTMS significantly reduced social and speech deficits as measured by ATEC and parents’ report. At the same time, children’s imitation and cognition might be improved following treatment.

The specific mechanisms underlying these effects may reflect specific neuroplastic effects associated with high-frequency stimulation and will require further investigation. Physiological experiments in humans indicate that HF-rTMS evokes long-term potentiation (LTP) of synaptic transmission (24, 25). These changes are not only restricted to the site of stimulation but also observed in a widespread cortical and subcortical network (26, 27). The use of HF-rTMS (20 Hz) to adaptively modulate properties of the MNS in humans has been reported in typically developing individuals (16).

From a neurophysiological perspective, we hypothesize that these clinical effects resulted from stimulation of IPL and associated MNS, which have been linked to ASD (7). Stimulation of the IPL may induce long-lasting changes in the excitability of regions within the MNS network (28). Such alterations may improve one’s understanding of social environment and may reinforce the capacity for imitation. Thus, an enhanced interpretation of social context may lead to improvements in language and social skills, as shown in the current trial (28).

Growing evidence suggests that dopaminergic dysfunction is implicated in the pathogenesis of ASD (29, 30). Human studies show that HF-rTMS of the frontal cortex induces the release of dopamine in the cortical, limbic, and striatal brain regions (31). In this study, HF-rTMS on parietal cortex might alter dopamine activity in specific brain regions, which is related to social cognition in ASD (30).

To the best of our knowledge, this study is the first attempt at HF-rTMS over the IPL in intellectually disabled individuals with ASD. According to clinical observations and caregiver reports, HF-rTMS in this trial might be more effective in boys than in girls. The underlying reasons for the significant gender disparities in treatment outcome are not clear. However, female individuals with ASD seem to exhibit lower IQ (32), more severe phenotypes (33), overall autistic symptoms (34), and psychopathological problems (35). Moreover, it is important to note that the four girls in our study were two sets of twins; thus, genetic factors may play a critical role in their pathogenesis.

It may be confusing that the clinical effects measured by scales did not turn up at the time point of “immediately after the treatment course.” We thought there may be two reasons to account for this. Firstly, the number of participants in our study was relatively small, which may have a great impact on statistical analysis. Despite the limited validity of parental reports as outcome measures, the improvements in social cognition and speech were indeed observed during and after the treatment course. However, the improvements were not reflected by statistical analysis, as we expected. Secondly, repeated sessions of HF-rTMS could produce remodeling with an increase in active synapses (36), which may be responsible for cumulative rTMS effects. This may explain why the difference achieved statistical significance only at the time point of “six weeks after the second treatment course.”

Our study had several limitations that should be mentioned, including the fact that the study does not contain a control group (e.g., sham HF-rTMS), the conclusions are limited by the small sample size, limited validity of parental reports as outcome measures, and lack of neuroimaging and/or neurophysiological assessments. In future follow-up studies, large case–control clinical trials are necessary to explore the use of HF-rTMS as a unique treatment for improving core symptoms in ASD.

Our original findings suggest that HF-rTMS on IPL has the potential to become a distinct therapeutic method aimed at treating core symptoms of ASD.

This study was carried out in accordance with the ethics committee of Xuanwu Hospital with written informed consent from all subjects. All subjects gave written informed consent in accordance with the Declaration of Helsinki. The protocol was approved by the ethics committee of Xuanwu Hospital, Capital Medical University (LYS2017063).

This research was supported by the National Natural Science Foundation of China (81801124) and the Beijing Municipal Hospital Research and Development Plan (PX2017069).

Copyright © 2019 Yang, Wang, Xue, Huang and Wang. This is an open-access article distributed under the terms of the Creative Commons Attribution License (CC BY). The use, distribution or reproduction in other forums is permitted, provided the original author(s) and the copyright owner(s) are credited and that the original publication in this journal is cited, in accordance with accepted academic practice. No use, distribution or reproduction is permitted which does not comply with these terms.